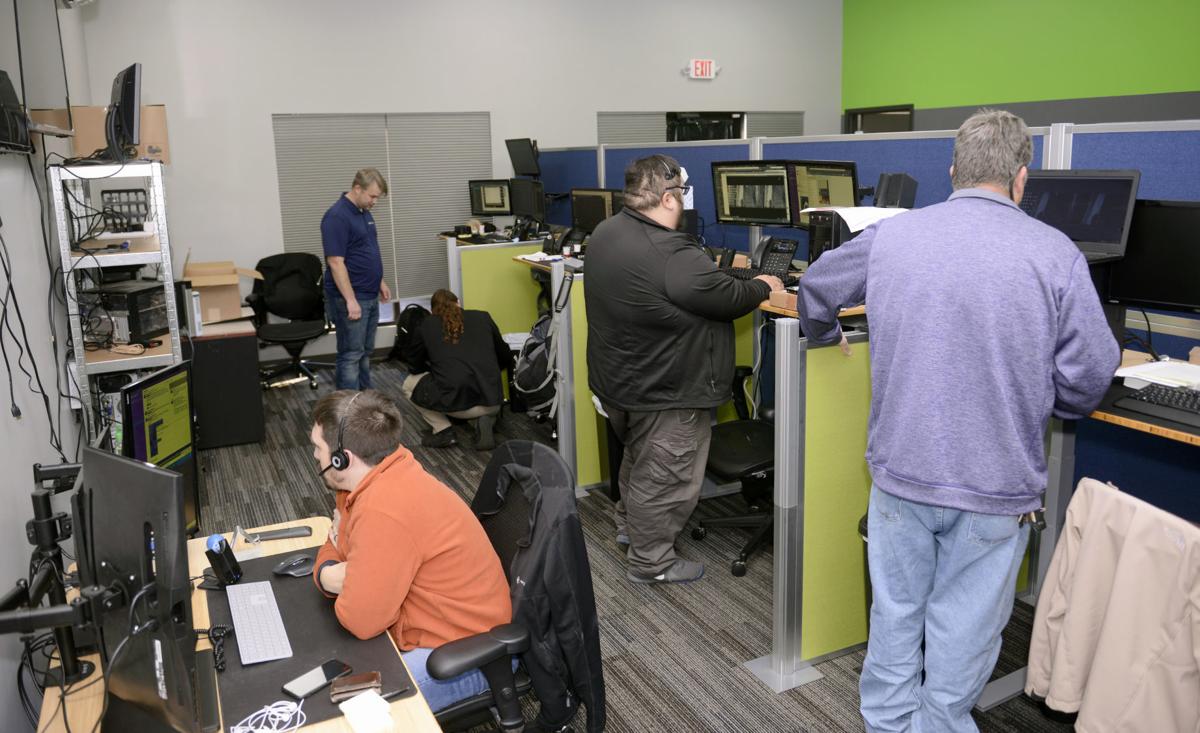 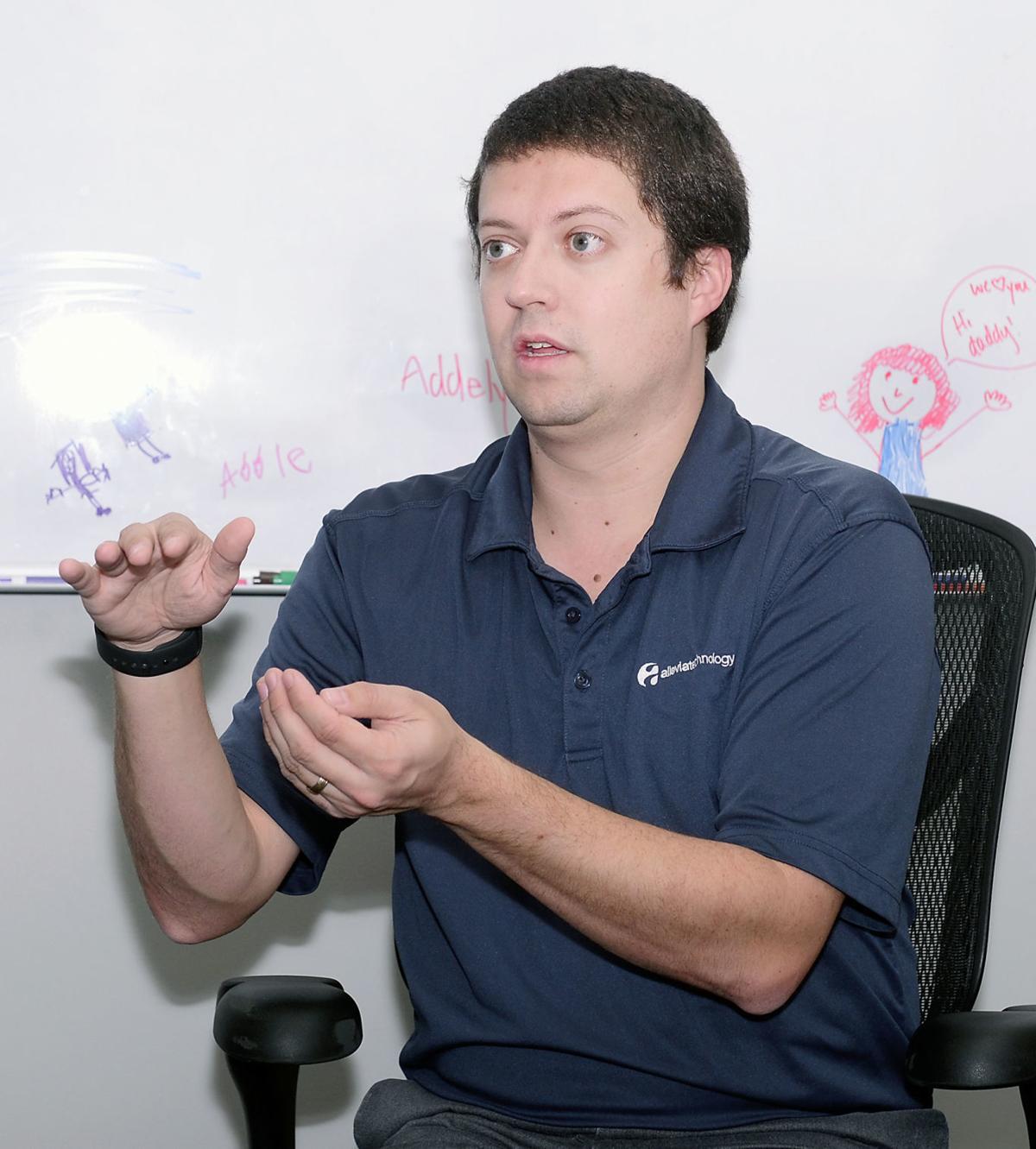 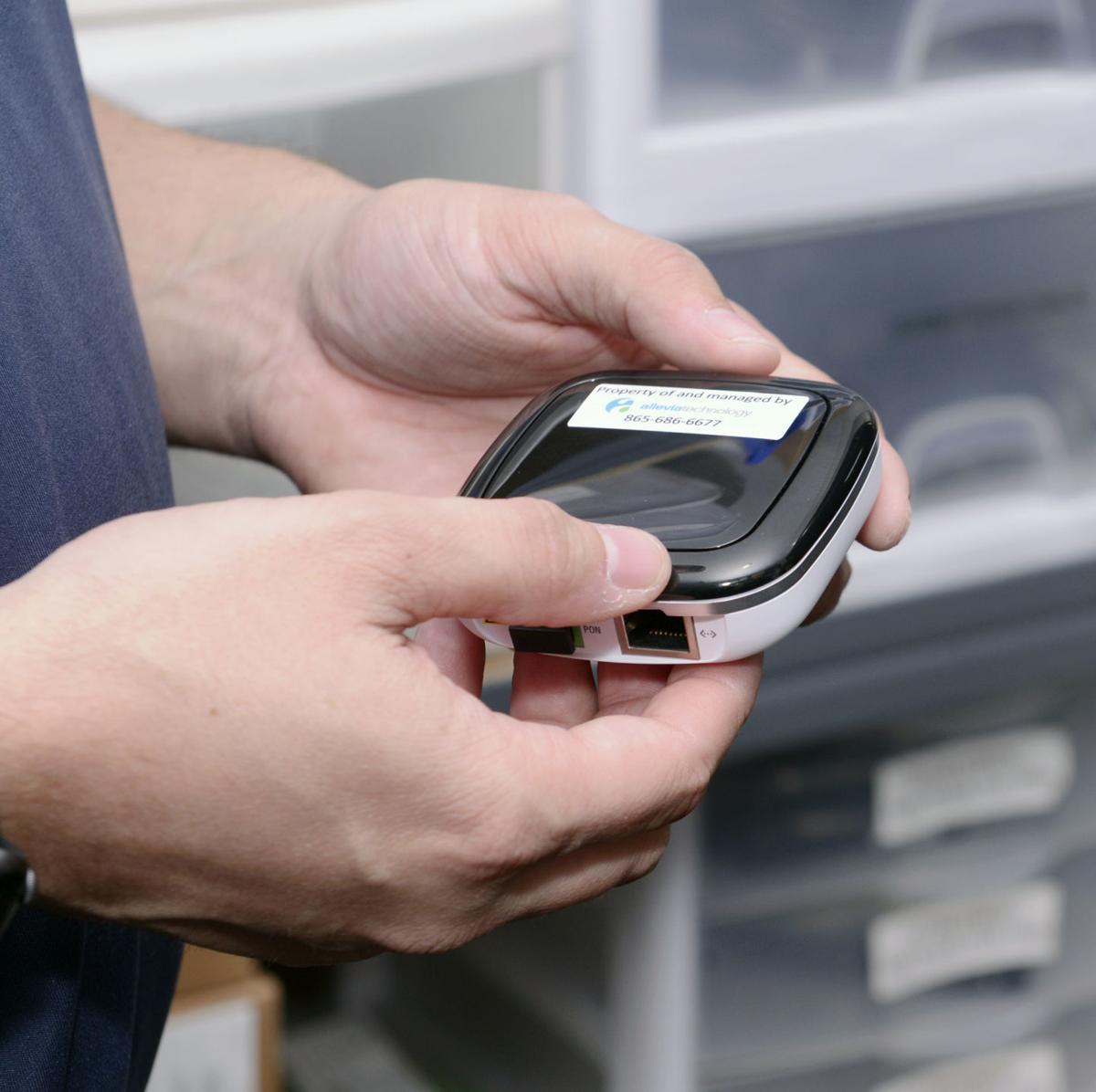 Stefan Wilson holds a GPON unit that is placed next to a customer’s electric box by Allevia Technology. It does the translation from the fiber that comes in from the city of Maryville infrastructure to copper ethernet that will go into customer’s equipment.

Stefan Wilson holds a GPON unit that is placed next to a customer’s electric box by Allevia Technology. It does the translation from the fiber that comes in from the city of Maryville infrastructure to copper ethernet that will go into customer’s equipment.

What a difference six months makes. When Allevia Technology moved into their new office on East Broadway the office was an open room with technicians working with customers from computer work stations along the outer walls.

As Allevia has grown, that open space has filled up like parking spaces at a mall on Black Friday.

It’s that kind of transformation Allevia and Maryville and the Maryville Downtown Association (MDA) hope will be the result of the new agreement between the company and the city for the firm to provide affordable, high-speed internet service to downtown.

Here’s how it happened, as told by Stefan Wilson, Allevia’s founder and “benevolent overlord.”

“The full story is, we had a client downtown that wanted to swap to a different phone provider. In order to do this they had to have a certain grade of internet. We start by calling AT&T and Spectrum (Charter) and said, ‘Hey, we need this level of internet.”

The answer was a surprise: You can’t get it, not in downtown Maryville.

So Wilson called a friend who is a member of the MDA’s Economic Vitality Committee and said, “‘What’s the deal?’ And he goes, ‘I know, it’s the weirdest thing. You cannot get good, cheap internet downtown.’”

“When he sent me that, I couldn’t believe it. This is 2019. How are we struggling in Maryville with internet downtown, which is supposed to be the business center of Maryville?”

Part of the problem was that downtown hadn’t been Blount County’s economic center for some time. The retailers had migrated to Midland Plaza and then to Foothills Mall and newer shopping centers featuring big box stores. Now to the internet.

One of Allevia’s clients gave up on it and simply moved his office out of downtown. The next move was up to the city.

“So we looked at it, and through that I met Angie Luckie with the city of Maryville, economic development director. Talking to her it was like, ‘The city of Maryville has fiber in the ground. We don’t really care who we lease it to. We just want somebody to lease it from us to get internet down here.’”

“So I ran the numbers. There’s not enough critical mass (of customers) downtown to get an AT&T or Spectrum to come in. The deal is they want to own their own infrastructure. They don’t want to lease it from somebody else. There wasn’t enough ROI (return on investment) for them. It’s going to cost them maybe a million bucks to dig up and trench sidewalks and pull permits and all this stuff.”

But Wilson didn’t need to own the infrastructure. Didn’t even want it. His business is handling information systems for small businesses and is geared to companies with five to 15 “seats” as he calls the computer stations where employees work.

“I’m thinking, okay, it’s kind of a win-win, because we really want those managed services. We want to be that IT department for small businesses, and the internet is the No. 1 problem downtown. The MDA wins because they took on this issue and they found a partner to get that solved. The city wins because they’re frankly tired of people crying about it: ‘There’s no internet downtown here. I signed a three-year lease and I get moved in and I can’t get any internet down here that’s cost effective and reasonable.”

Wilson stated what was already obvious to downtown businesses clamoring for decent internet: “The internet now is basically a utility. Show me a business that can survive with no or crappy internet.”

Do not pass the word

He gave an example of how the impact happens in not so obvious ways. Take a restaurant where customers come in for lunch and listen to music while they eat.

“The music you’re hearing is streamed over the internet. Their point of sale depends on the internet connection, and they were trying to guest wi-fi as well. So what will happen as you go in there for lunch? You’re hearing music, then all of a sudden the music will stop. And the reason is that people come in, get on the wi-fi and bog the internet down to such a point that it kills the music. There’s not enough bandwidth to do their music, their point of sale and their guest wi-fi. So they’ve ended up having to stop giving out the password.”

That’s not an imaginary example. Neither are Wilson’s plans for Allevia.

“If my sole goal here was to make money I wouldn’t do this. The margin’s not there. But I grew up in Maryville, my wife’s here, our kids are here. We really want Maryville to be cool. So how can we make downtown cool? How can we get more businesses down there? How can we get more entertainment and more offices and simultaneously help the community and also, ideally, make a little bit of money or at least cover costs. Now it’s a win for all sides.”

Since Allevia and the city of Maryville signed their agreement, two customers have already signed up with the company, three more are in the process, others are at the talking stage. The Capitol Theatre is already hooked up.

“It starts with us being the point person to sell it to the customer, to say, ‘Hey, this is available, we can get this in here, which speed tier do you want?’ Then the customer signs up with us, we give it to the city, the city pulls the infrastructure in, and then we come and make the final connection. We’re managing it. If there’s a problem with the internet, call us.”

That’s what Allevia Technology is counting on. So is the city of Maryville. So is the Maryville Downtown Association.

Great article. Explains what was the driving force and explains why ATT and Spectrum was not there.