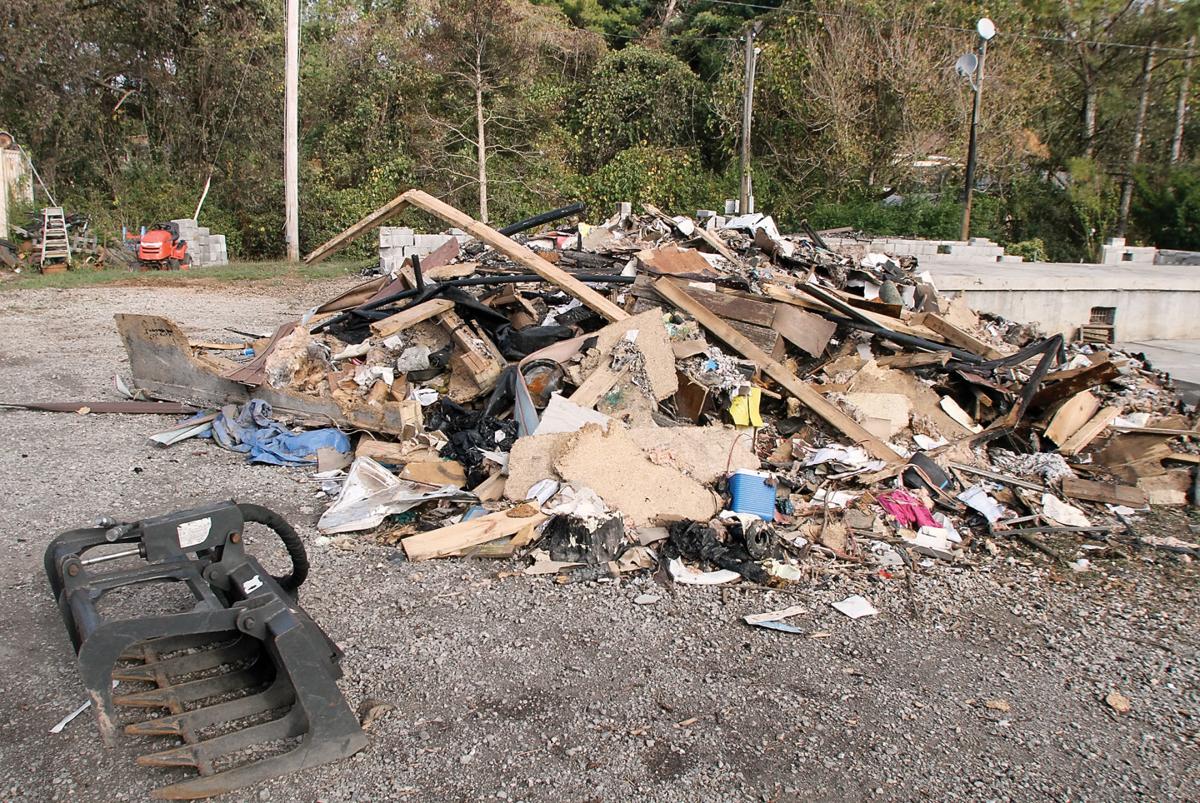 Petree Arbor Lawn & Landscape is cleaning up after a fire completely destroyed the business Sept. 23. 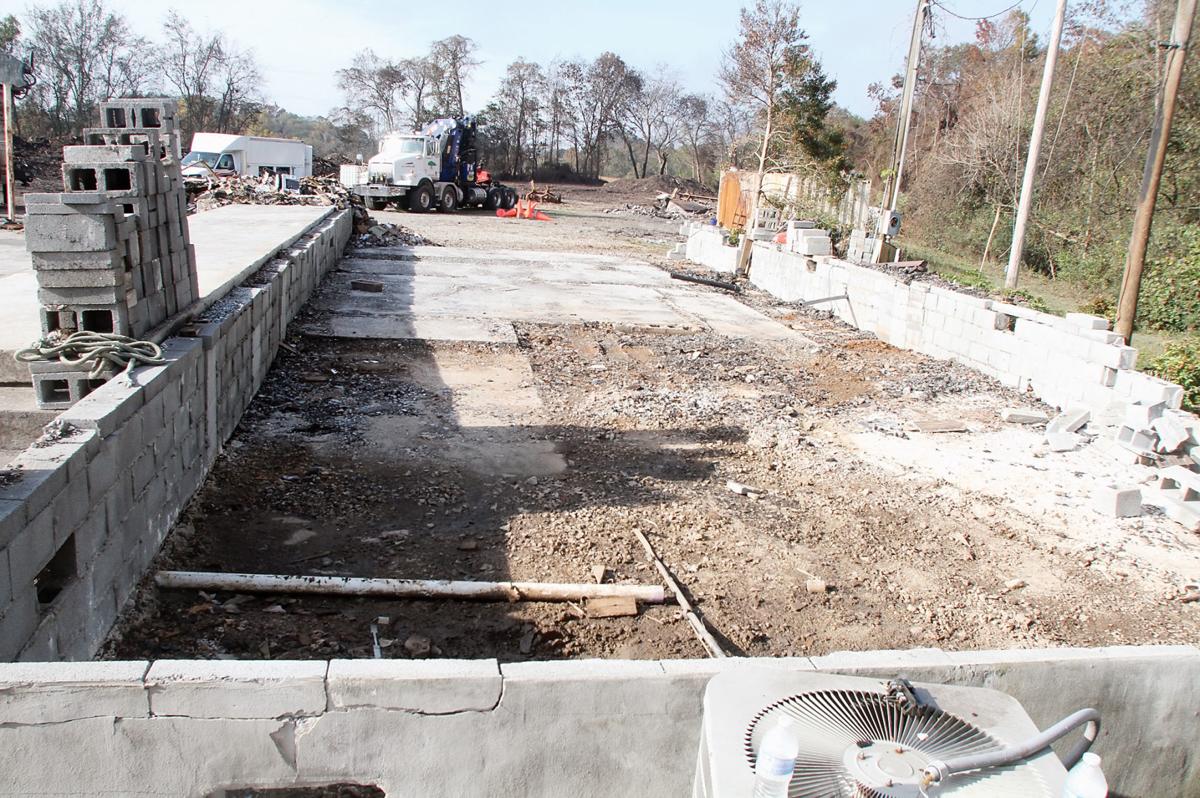 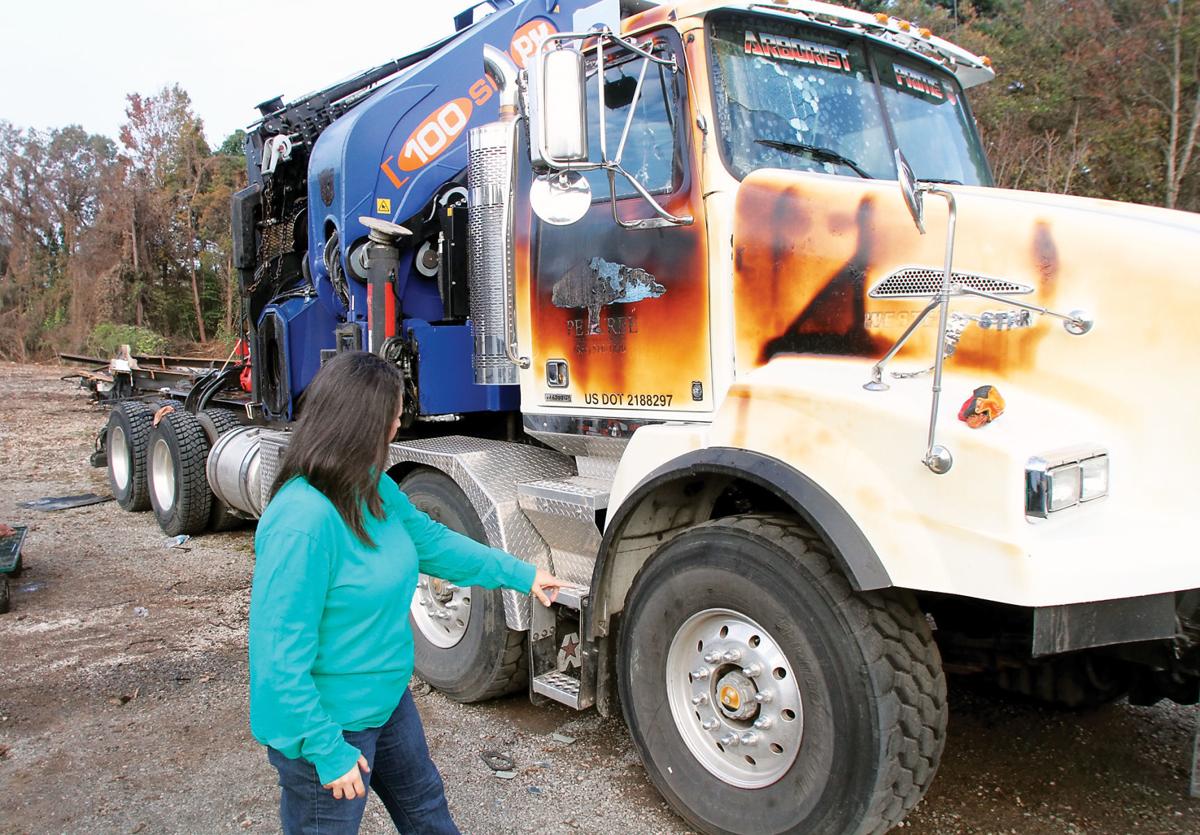 April Petree talks about the fire damage done to the company's new crane during the fire. 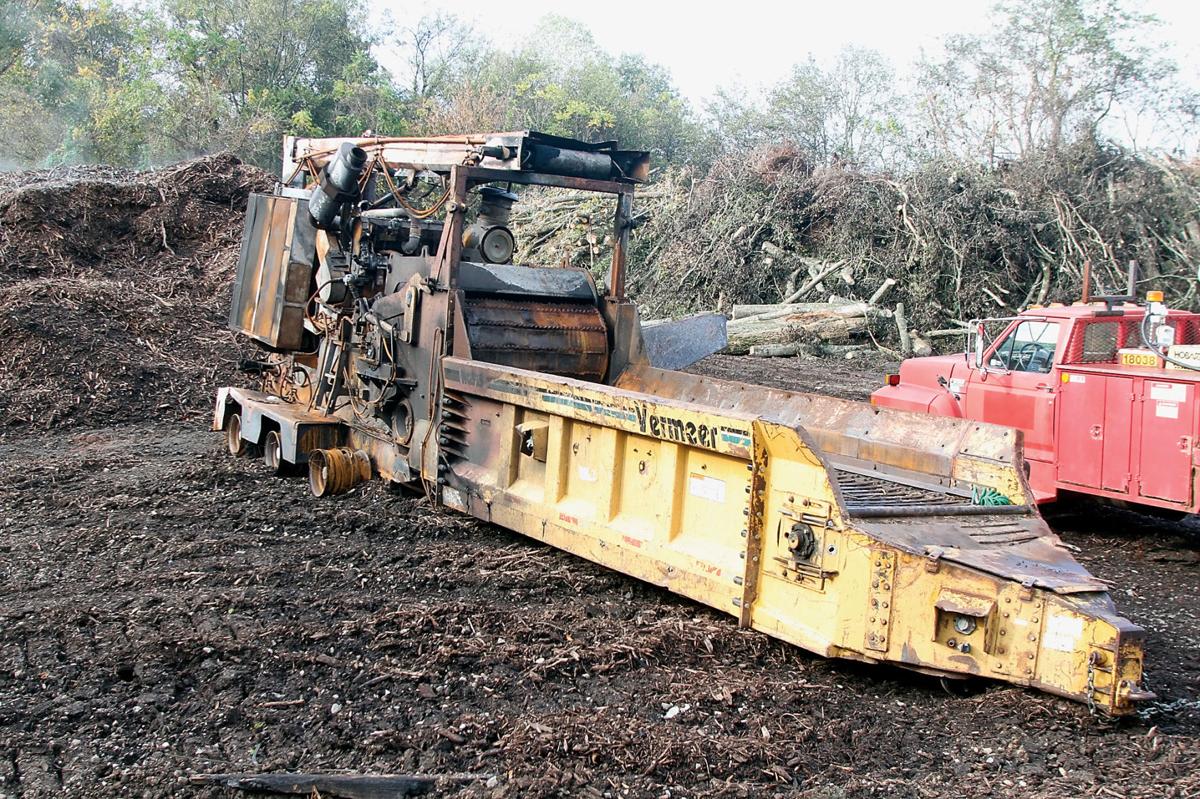 The September fire destroyed a excavator and horizontal grinder along with the office building. 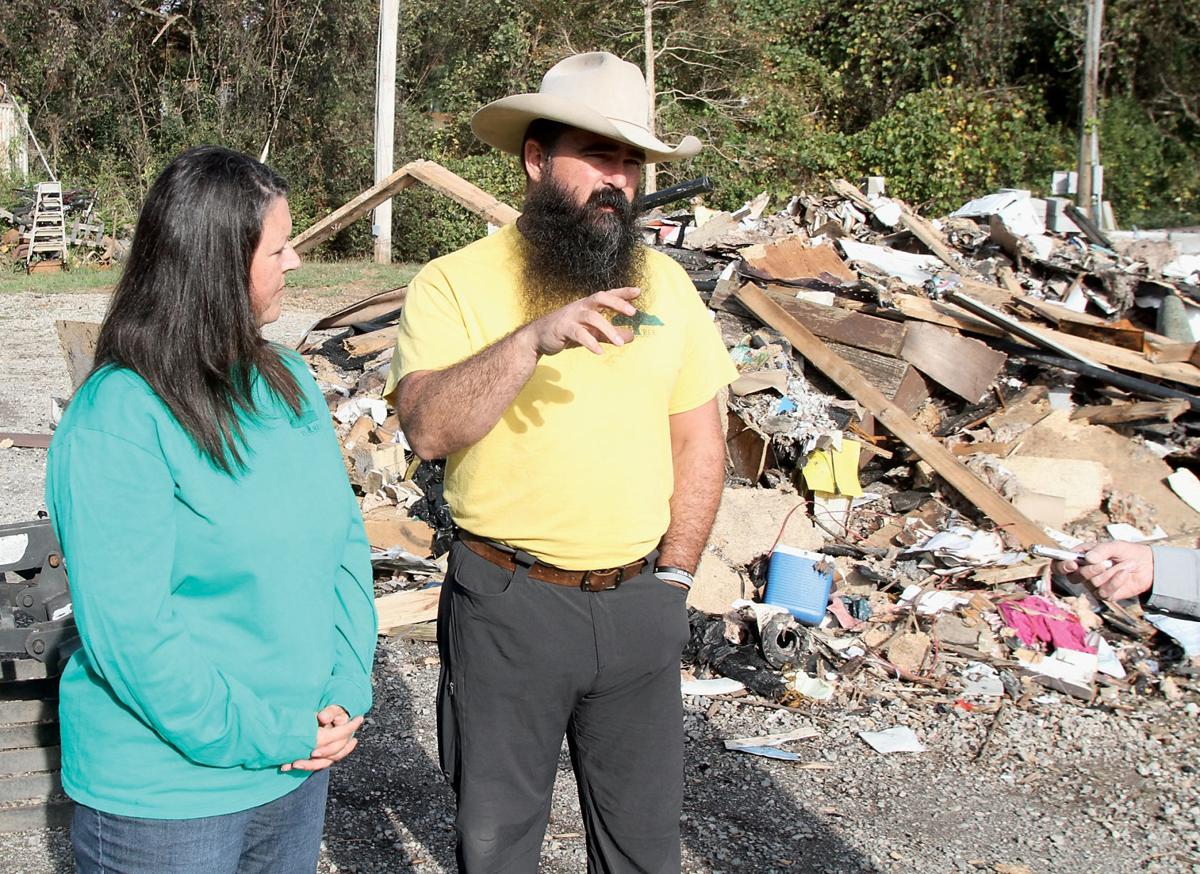 Brad and April Petree talk about the damage done by the Sept. 23 fire and their plans to rebuild Petree Arbor Lawn and Landscape.

Petree Arbor Lawn & Landscape is cleaning up after a fire completely destroyed the business Sept. 23.

April Petree talks about the fire damage done to the company's new crane during the fire.

The September fire destroyed a excavator and horizontal grinder along with the office building.

Brad and April Petree talk about the damage done by the Sept. 23 fire and their plans to rebuild Petree Arbor Lawn and Landscape.

They’d visited Acadia National Park in Maine and gone north to continue their vacation to where the trees are. They love trees.

Brad can’t remember what he had for lunch on Sept. 23. He does remember, “It was terrible. I remember I didn’t like it.”

Little wonder. The Petree family’s vacation was interrupted by a phone call. So were their lives.

“We had just gotten there and started to explore the city,” April says as she stands with her husband surrounded by debris in Louisville on Tuesday. “Around lunch time we were hungry, we had our family with us we got a call from the general manager and the first thing he said was, ‘It’s on fire! It’s on fire!’ And I’m like, ‘What?’”

The call was short because the manager had to hang up to deal with the flames.

“How would you like to deal with that?” Brad asks. A rhetorical question.

“On vacation — so we didn’t get a vacation,” April adds, laughing.

“Several states away in another country,” Brad adds.

He doesn’t remember the food he never finished. He does remember a succession of more phone calls during the half-eaten meal.

“We went through a kind of protocol. ‘Okay, the fire extinguisher?’ ‘Yeah, we done that.’ ‘You’ve called 911?’ ‘We’ve done that. The fire department’s here.’ I could hear the policeman that was talking to the manager, he was like, ‘Oh, they’ll have it out in about 20 minutes.’”

Virtually all the company’s equipment is destroyed. A half-million dollar crane that could cut trees by remote control, just purchased in December, might be partially salvageable. It’s being transported to Ohio to find out. The office building and all the company’s records are ashes.

Employees and first responders told Brad what happened, reminds him of another fire. One that happened just short of three years ago. One that took 14 lives and left 190 injured.

“The day the Gatlinburg fire came through we were working on a property, the Anakeesta (theme park) property, and we left due to the fires an hour before they shut Gatlinburg down,” Brad recalls.

“Hearing what the manager said and the fire department said, it was kind of reminiscent of it. The wind picked up in the right kind of way and the dry material. That kind of brought me back to it. I was like, ‘Oh Lord, it’s that all over again.’ It was more of an eerie kind of feeling, I reckon.”

It also put the Petree Arbor fire in perspective, as Brad recalls what happened. An employee was using an excavator, moving brush and cut wood that is run through a grinder into pieces, turned, and ground again into smaller pieces so it can be used for landscaping mulch.

“As he was sitting on the machine, he looked out and saw the smoke on one side. He thought the engine was overheating and he climbed out, looked underneath it and saw flames. His first thought was to get it away from the brush.”

But he couldn’t. The engine wouldn’t restart. He grabbed the fire extinguisher off the machine and tried to put out the flames.

“The fire department got here and started putting it out. The wind kind of picked up, from what the manager says, right when it was starting. From that point on there wasn’t hope for it I guess,” Brad says.

Then he reflects on the difference between the fires.

“To a business it can be seen as devastating, and to the people who work here it is devastating, but I remember responding to a guy and telling him, ‘You know, everything here is materialistic. No one was hurt. The fire didn’t impact any other property. It really is, in my view, a testament got God’s miraculous grace.”

Brad Petree says that as he stands amongst the devastation.

“Equipment can be replaced. I remember the guy who was running the excavator, he had called and he was emotional and was apologizing and said, ‘I didn’t mean to do anything.’ I said, ‘Man, you’ve got kids.’ I said, ‘You’re going home to them today.’ I said, ‘That’s the important thing. The important thing is no one was hurt.”

It’s perspective shared by April. She handles the business records. They’re all gone. April’s office now is her mother’s kitchen table. She had the business’ phone number transferred to her cellphone. They’ve still got one work crew operating.

“In those 20 years that we were here, we raised our kids in the office, they had their toys here and memorabilia, things like that that you can’t replace. It was kind of our home away from home, because it’s your livelihood and it’s who you are,” April says.

Who they still are.

“You really don’t have any time to sit and wallow and think ‘poor woe is me,’” Brad says. “For 20 years the way we looked at it is everything’s a challenge. Business for 20 years has been all up hill. It’s not been an easy, smooth road. So you face one challenge, you face another challenge. The Bible says that God won’t place more on you than you can bear, so we look at it on those terms. God must think a lot of us because of what we’re having to bear,” he says, laughing again as he speaks. “But it’s true.”

Both April and Brad express their gratitude for the first responders including Blount County Fire Department and the others, neighbors, fellow parishioners from Park West Church of God in West Knoxville, businesses who fed the first responders, everyone who demonstrated their kindness and offered their support.

Bottom line, Petree Arbor Lawn & Landscape is open for business. The website is still up: petreearbor.com. The office phone number is still 865-980-1820. They’re still on Facebook.

“We definitely still are in business and still doing what we do best,” April says.

“It’s laying a foundation, block by block, one piece at a time,” Brad says. “You’re reeling from everything that goes through your mind. This is step one, we have to do this. You’ve got that handled and this is the next step.”

I am glad to see them rebuilding. The Petrees are great people. They built a beautiful patio with flower gardens and trees for us. I plan to use them again in the future.