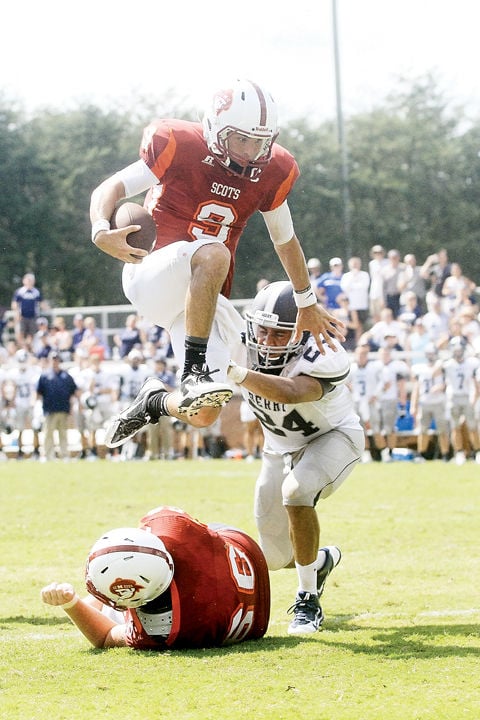 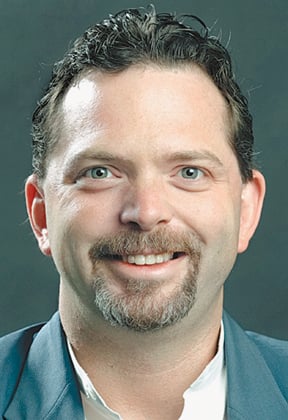 It has an official name on the sideline and in the huddle.

It has several unprintable alternative references provided by the teams who have been on the other side of the Maryville College goal line sweep package.

In the press box, we call it Clan McRader Right.

No matter what it was called Saturday, it provided quarterback Evan Pittenger with a pair of rushing touchdowns and was a momentum knock out after the 1-2-3-4 combo of running backs that chunked up Berry College’s defense with big gains to the tune of 292 rushing yards.

In the first half.

The Fighting Scots finished with 387 net rushing after building up some game experience in the fourth quarter.

The big runs were fun. Dehjion Whitlock tearing off a 75-yard scamper that got the sophomore, from Charlotte, N.C., into the MC record book — fourth longest scoring run in school history — following his first collegiate start. Heralded Texas product Raekwon Neal jetting loose for a 69-yard run in his first college game. Eddie Brock throwing an effective stiff arm with all 5-foot and 8 inches of his frame that so infuriated the Berry defenders the flag for the hit out of bounds cut the distance to the goal in half. Trenton Shuler’s long was for 19 but was twice one shoe string from a much longer run.

Then there was Pittenger.

The mobile quarterback was as smooth and efficient carrying the ball as throwing it around a pentet of receivers Saturday in his 20th start for Maryville. The Lincoln County kid didn’t even bring his legs directly into play in the first half, except once. With operating room at a premium on the Berry 4, the call came in and Pittenger rolled left with a Red & White clad combine in front of him that picked off Berry defenders and left them in piles. Pittenger biggest obstacle to the opening score was clearing some of his own All-American lineman who had pulled around to help clear the way.

It was a definite statement. It didn’t matter how many yards of rushing had graduated, nor how many new faces were going hands down on the line, the Scots are still going to dare teams to stop their run game. Spread out a little and Maryville throws. Spread out a lot and something like Whitlock’s whiplash inducing dash is going to happen.

Heavy up the middle near the goal line and the whole clan of Scots is coming around the flank.

It was demoralizing to Berry at the start. It was more so the end of the third when those clad in head sets made the call again.

The Scots hadn’t even flinched on going for it on fourth down, converting first at the Berry 37 but failing to pick one up in the red zone. When the third dose of deft theft by the secondary gave MC the ball right back in nearly the exact spot 90 seconds later, there was no doubt what was coming it was where. Pittenger keep to the right on the sweep. With heaps of white jerseys on the ground, Pittenger picked his cut back lane and waltzed in for the back breaking score.

It isn’t just the score. It’s the fact the Scots 11 guys just performed like one big body and executed so well that it’s hard to call it anything but a dominating display. Those first 10 get a man and out-muscle or out-will him out of the way and it’s a touchdown.

It’s simple and terrible when done well. It covers lots of little mistakes and snafus along the way. It takes effort of will, discipline and an aggressive but focused mentality.

And most importantly for the team coach Mike Rader and his Scots are building, it takes the whole clan to get it done.

Marcus Fitzsimmons is sports editor at The Daily Times.

A ground game as oppressive as the sultry September weather and a turnover-producing defense propelled Maryville College to a 41-14 home-opening victory over Berry College Saturday afternoon at Thornton Stadium.

How the Scots scored against Berry College

How the Maryville College Fighting Scots football team scored against Berry College in the season opener.

An East Tennessee newshound since 1990, minus a few years spent working the road race circuit in D.C. , Marcus has been a reporter, copy editor and sports editor, and is now a production manager of APG's Design Hub located at The Daily Times.