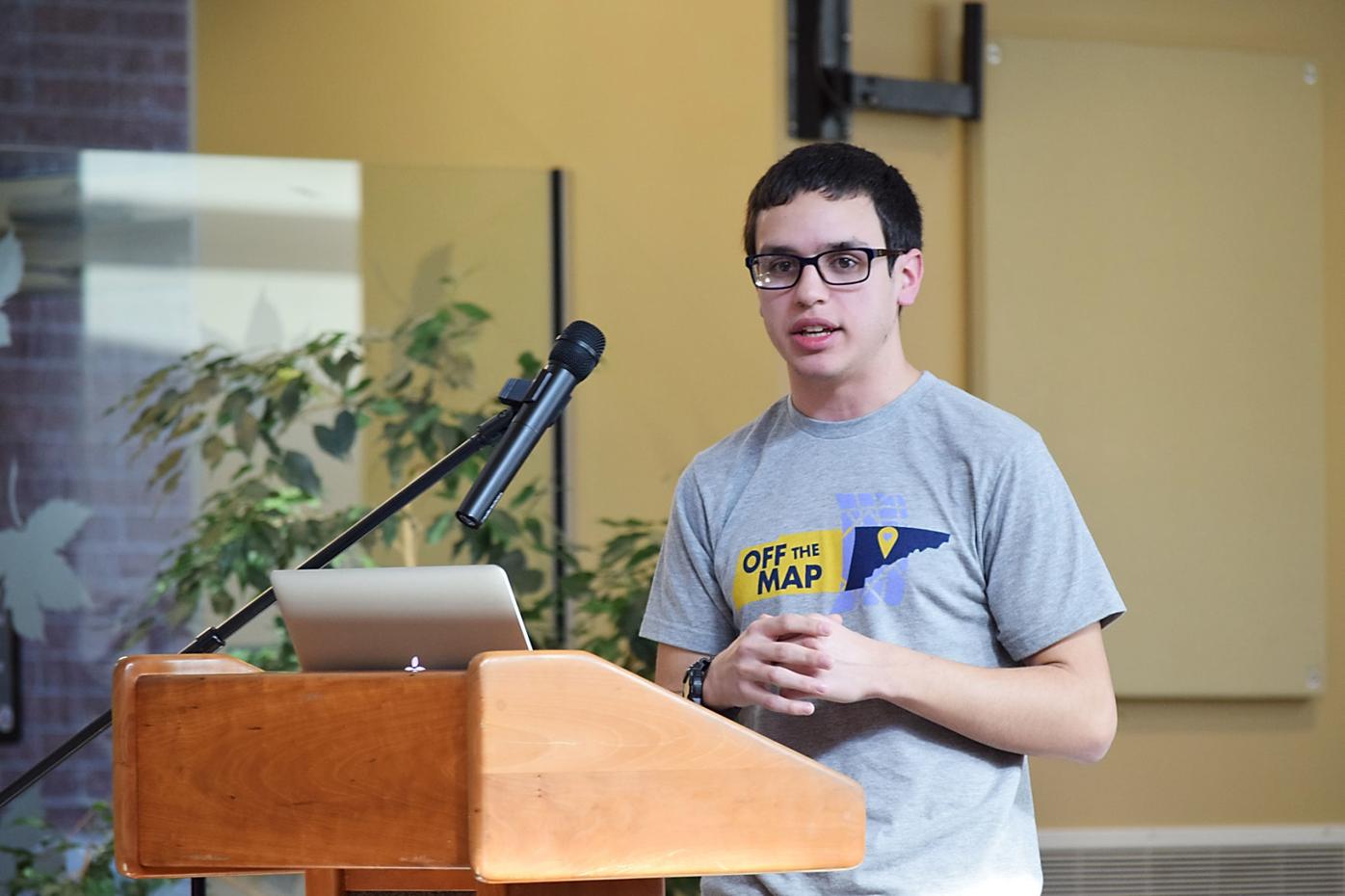 Maryville High School student Garrett Smith gives an overview on the development of the “Off the Map” app during a presentation on the project on Saturday, March 23 at the Blount County Public Library in Maryville. 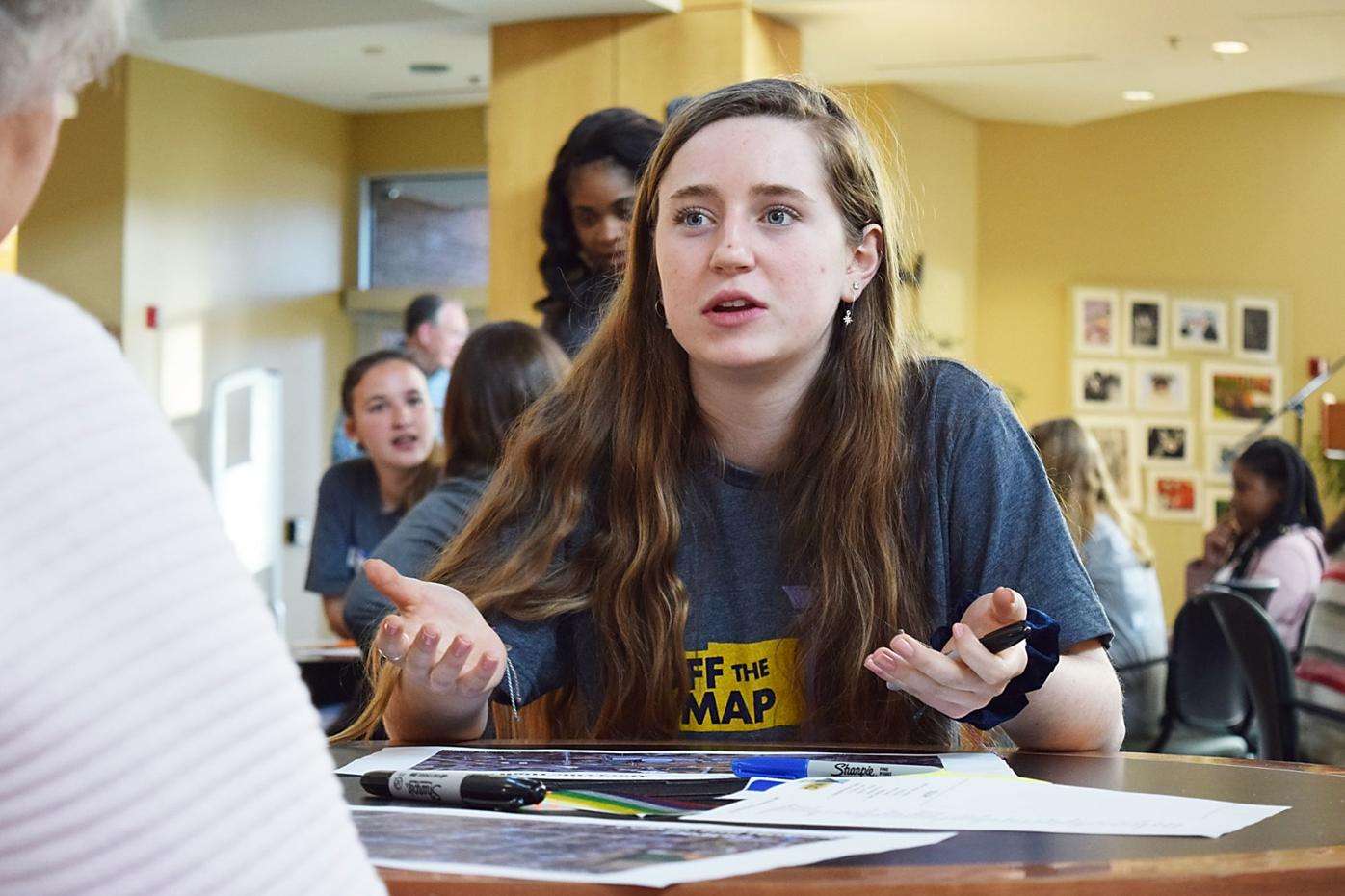 Emilie Conners with Maryville High School talks with members of the community about the Off the Map project during a small group discussion on Saturday, March 23 at the Blount County Public Library in Maryville. 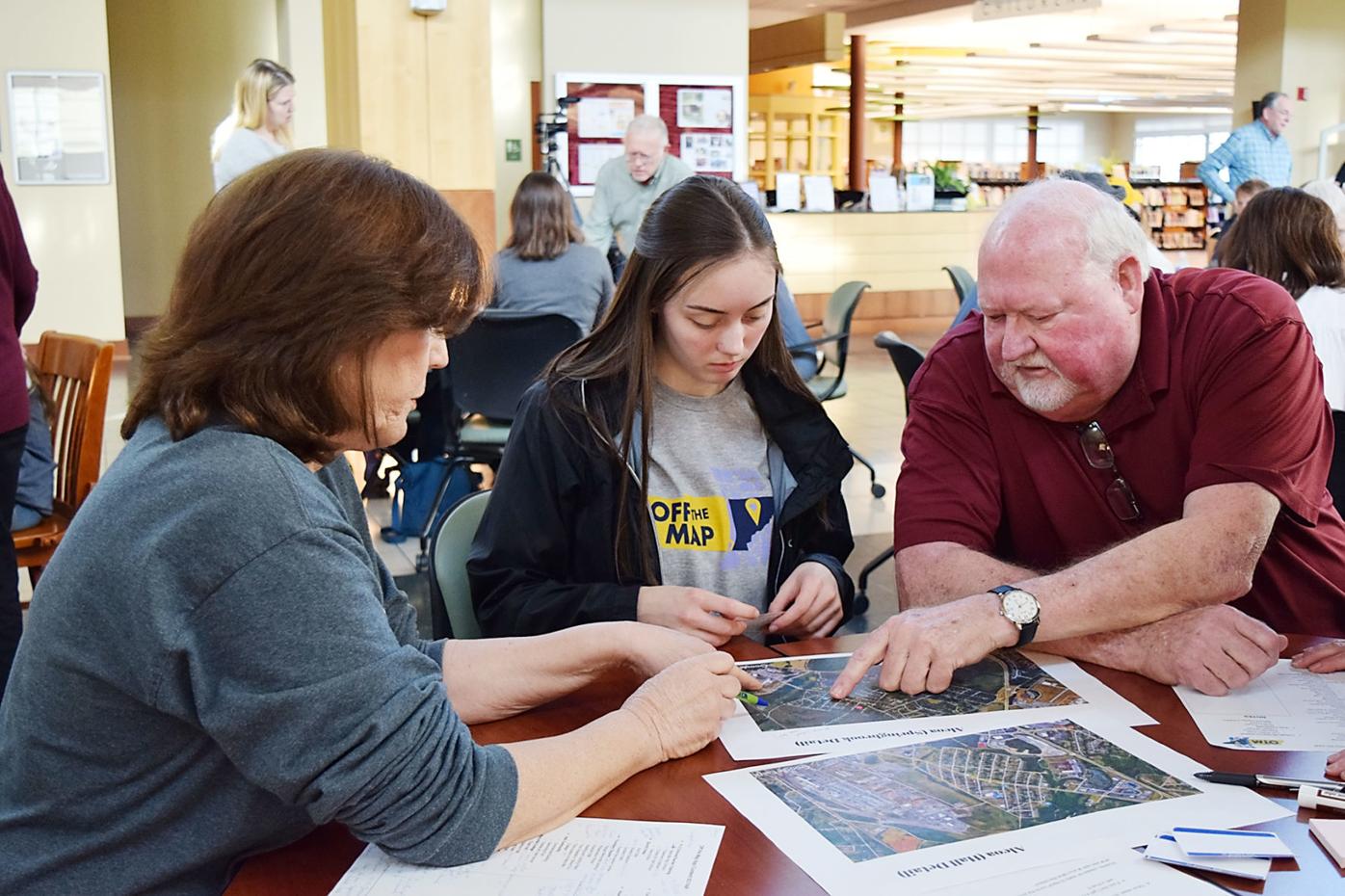 MaryAnne Thaldorf, Katherine Reed and Pete Headrick talk about adding locations to the “Off the Map” project during a small group discussion. 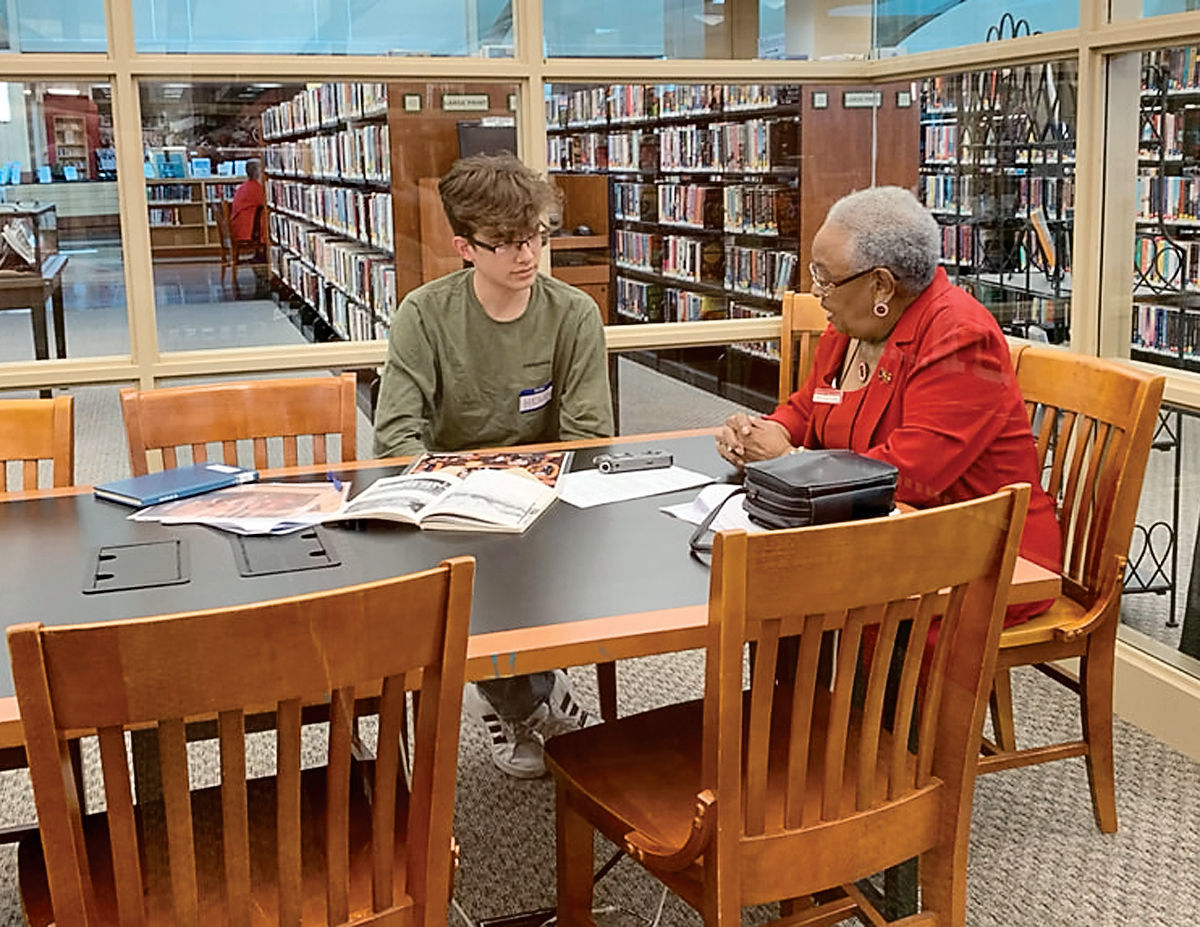 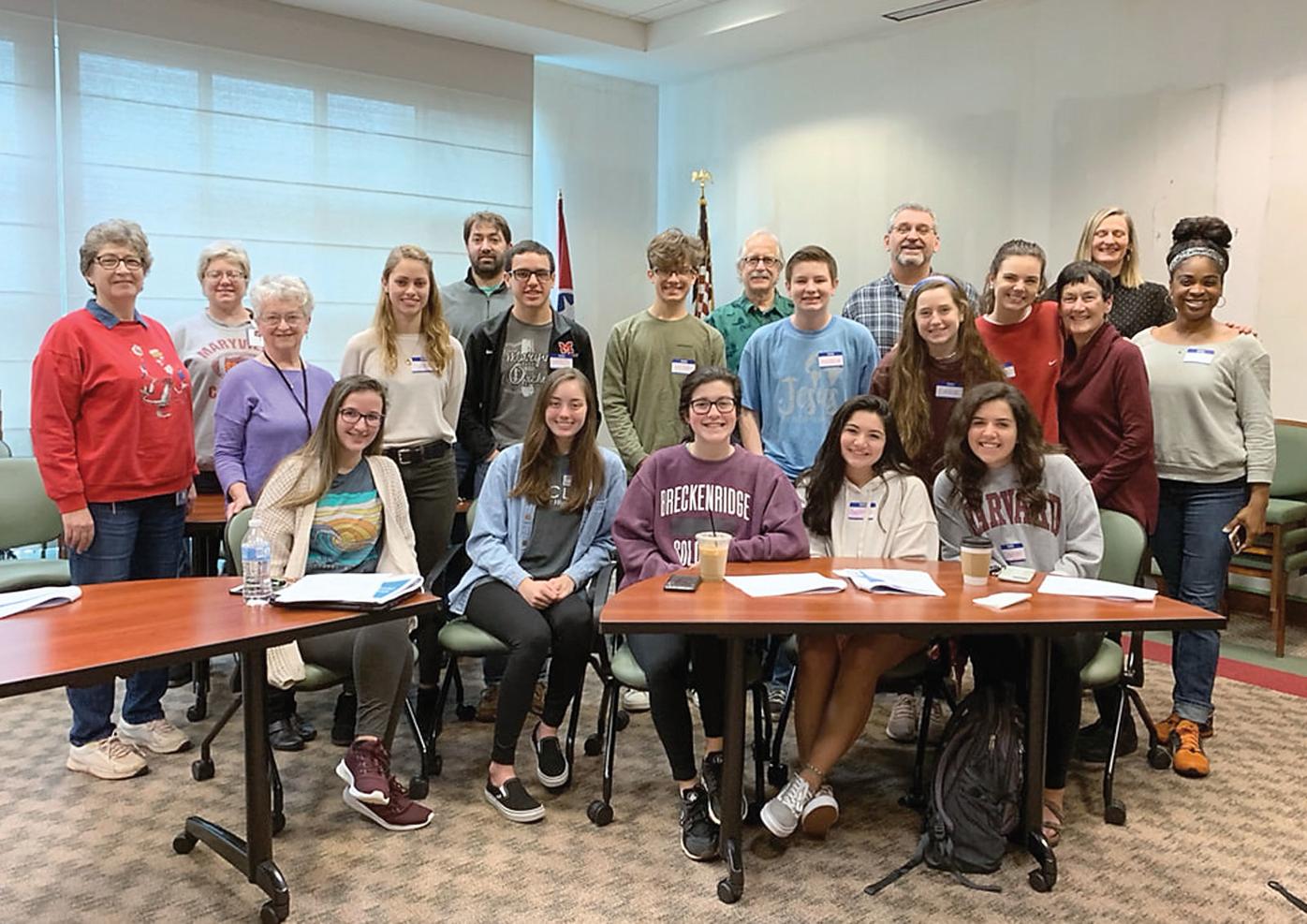 A Group of students and others who worked on the “Off the Map” project pose for a photo.

Maryville High School student Garrett Smith gives an overview on the development of the “Off the Map” app during a presentation on the project on Saturday, March 23 at the Blount County Public Library in Maryville.

Emilie Conners with Maryville High School talks with members of the community about the Off the Map project during a small group discussion on Saturday, March 23 at the Blount County Public Library in Maryville.

MaryAnne Thaldorf, Katherine Reed and Pete Headrick talk about adding locations to the “Off the Map” project during a small group discussion.

A Group of students and others who worked on the “Off the Map” project pose for a photo.

On a cold Saturday afternoon in February, a group of high school students stood on the sidewalk at 300 E. Church Ave., in Maryville.

Mayor Tom Taylor was leading the students on a historical tour of downtown Maryville, and according to one student, the time of day was exactly “before I normally wake up.”

The students observed the Dandy Lions gift shop and the Blount County Public Library, but when Taylor directed the students’ attention to the railroad ties in the sidewalk and the Carnegie-inspired architecture of the former Harper Memorial Library, the history of the area began coming to life.

Taylor said the group of students “not only learned much of Maryville’s and Alcoa’s local history, they also split into teams to research the history of small geographic regions.”

With support from faculty at Maryville and Alcoa City Schools, the library, the city of Maryville, longtime Blount County patrons and many other volunteers, the students curated their own descriptions of historic areas.

They did this by analyzing documents, researching buildings and conducting interviews.

A group of 10 students attended meetings and presented their findings at the library on Saturday, March 23.

With no compensation, no incentives from the school and with the understanding that they would give a presentation to the public, these students diligently completed their work.

A guest at the presentation remarked, “These students are unbelievable.”

On the other side of the country, Taylor’s daughter-in-law, Katie Taylor, a professor at the University of Washington, was working on a research project to study how technology can make education more immersive.

“After successful projects in New York City and Chicago, I was looking for a new location to continue my research,” Katie Taylor said.

On one occasion, when she visited town, she came across the Maryville Bicentennial Memorial on the greenbelt.

Having gone to both Maryville and Alcoa high schools, she found herself asking, “How did I never learn the history of my own city?”

“This thought planted a seed for a potential research opportunity,” she explained.

Around the same time, Mayor Taylor had some ideas of his own.

He mentioned this to Katie, and was genuinely surprised at how similar their ideas where. Together, they initiated a historical mapping project called “Off the Map” in which students can use technology to learn and preserve local history.

They kicked off the project by recruiting teachers, volunteers and most importantly students to participate.

‘Off the map’ On the web

Katie Taylor said one of the first students to join the team was Maryville High School senior Garrett Smith.

“He was an excellent addition because of his skills with computer programming,” she said. “The software we originally planned to use was very limited, and Garrett agreed to build an entire software platform for us.”

At the public event on Saturday, Smith revealed his progress saying, “The application is still in its early stages.”

As it progresses, app users can expect to see features including:

• Tools for teachers to provide their students with access to local history.

• Guided walking tours, generated from the information that users have added to the app.

Smith said the app will be available in the next few months and that he “plans to experiment with additional features such as augmented reality, if the app is well received.” While the app is in production, the entire team of students has begun the process of creating content to go in the app. At the public event, each group of students presented their hypothetical tour from the interviews and research they have been working on for the past two months.

Annabella Marlette and Braxton Baumann studied by theme instead of location.

Baumann researched sports fields and Marlette brought the history of local movie theaters to life by saying that “the guys of the time would wait in, or even on top of, their cars until the girls showed up to the theater so they could get in for free.”

Bringing together the community

“Like all good projects, there are many stakeholders with many goals,” Katie Taylor said. “Mayor Taylor aims to ‘create a resource to improve physical maps and preserve the stories of local history for future generations.’ Penny Ferguson at Maryville High School said she “jumped at the opportunity to get involved” because she wants to reinstate the importance of local history for teachers and students alike. K.C. Williams, director of the Blount County Library, volunteered to help with the project and provide space and resources to make it possible.

“History is a pillar value at the library,” she said. “And we believe this is an excellent addition to the Appalachian history projects we already do. We also want to grow our connection with students.” Katie described her own goal to study how students can use technology to learn local history as “a huge success,” but she added, “The project is far from complete.”