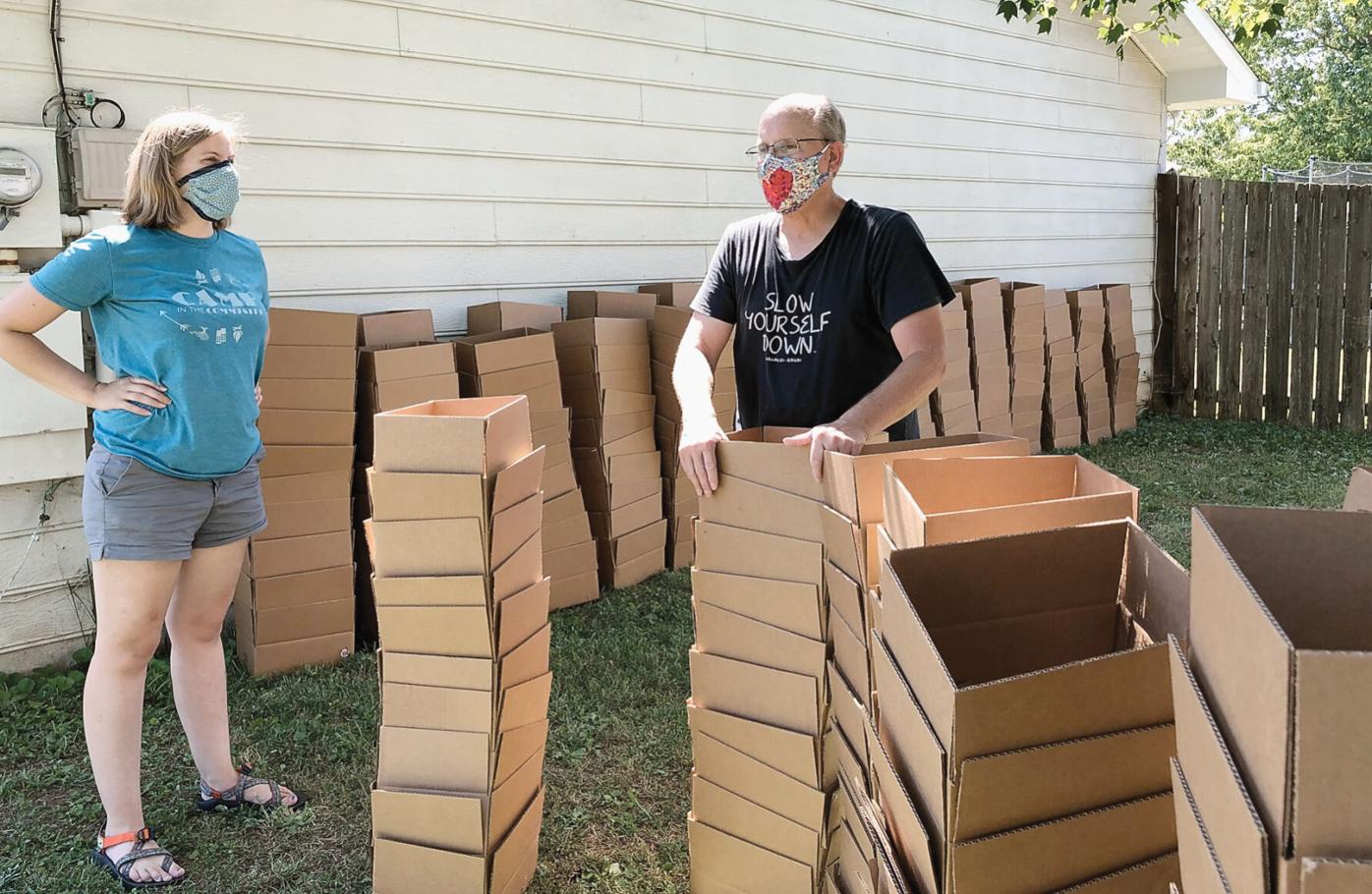 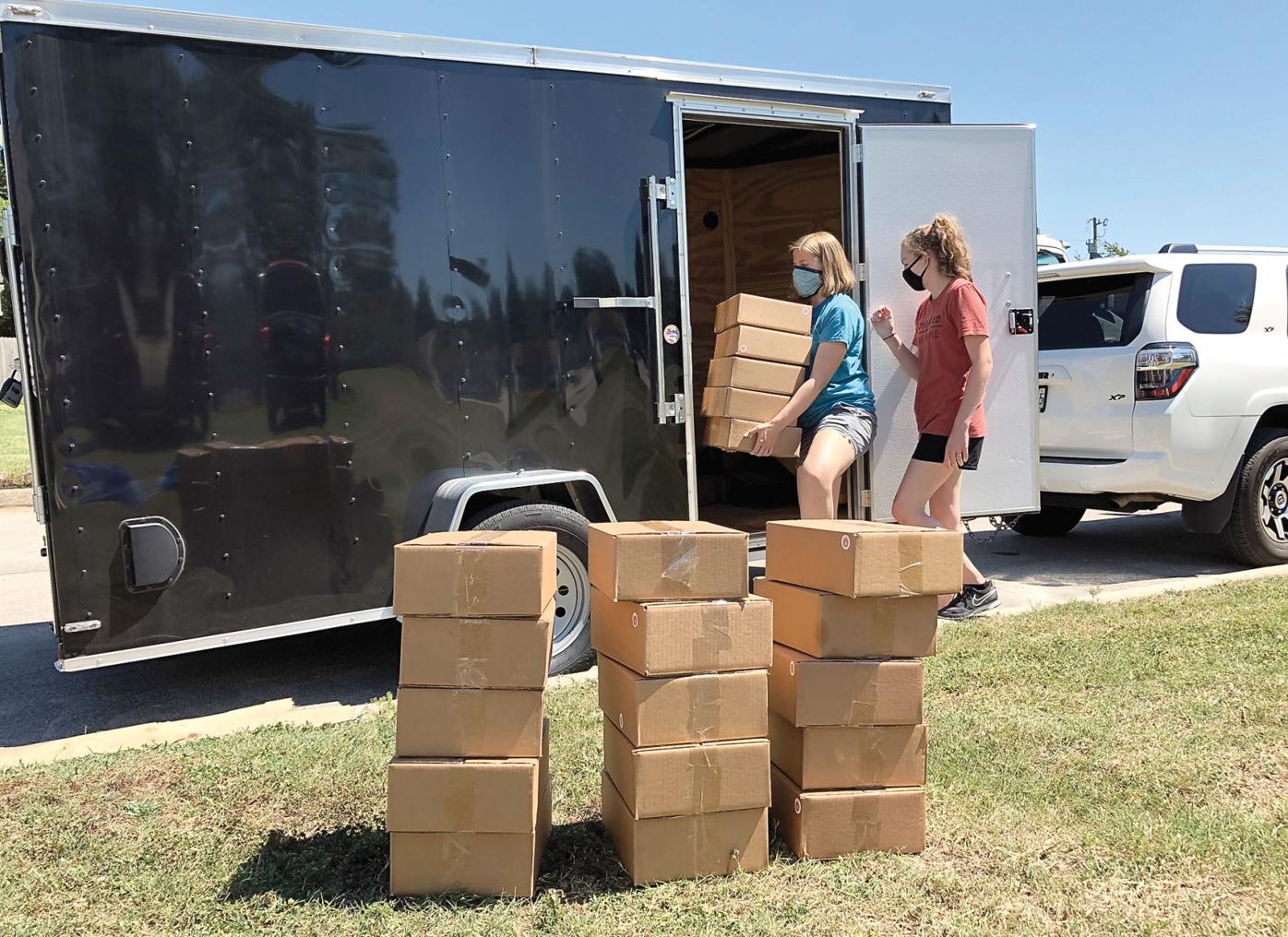 Whitney Winston (left) and Haleigh Davis load boxes from a trailer parked on the lawn at Winston’s home in Maryville. 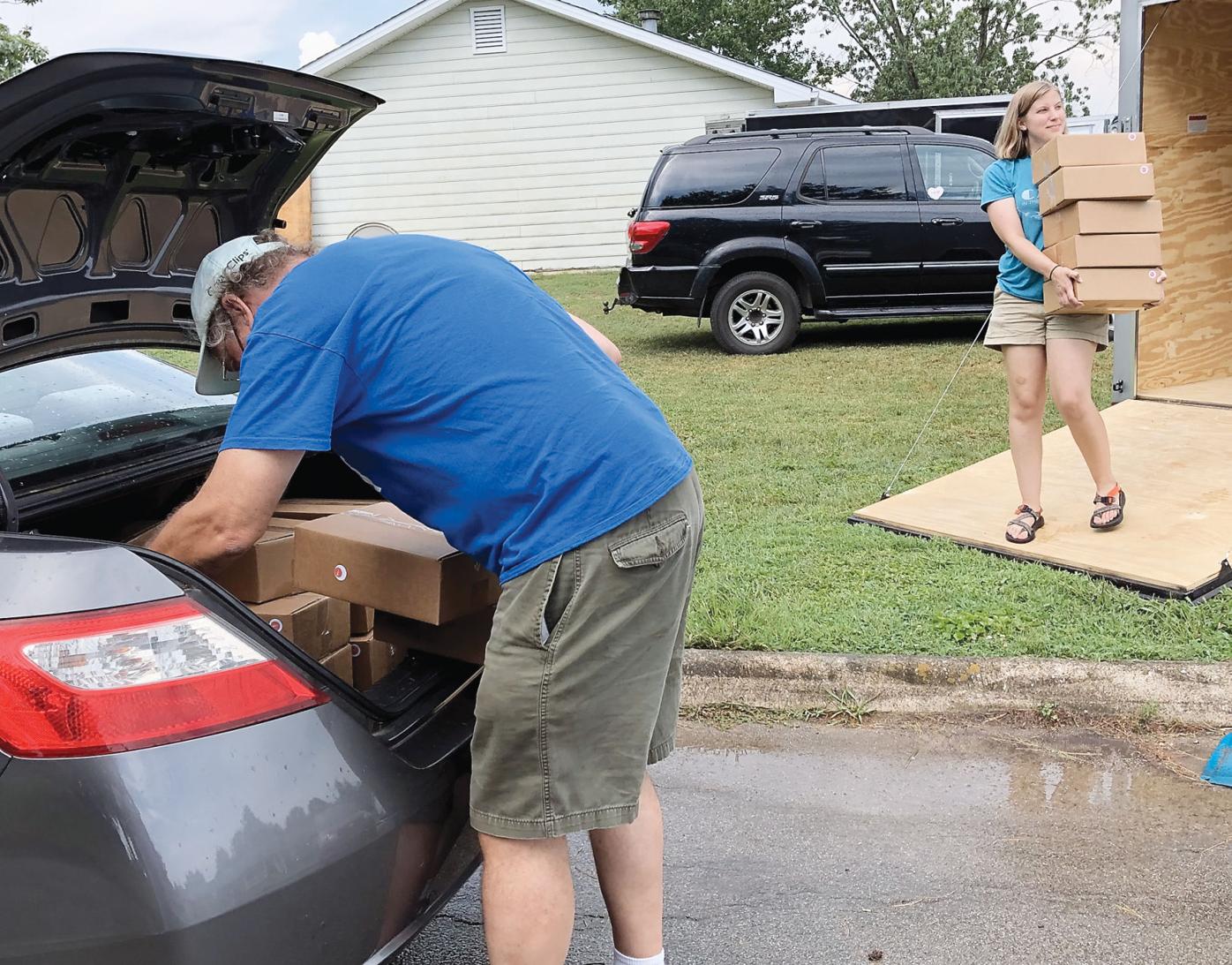 Whitney Winston carries camp kits from a trailer parked outside her house to Mike Feely, a volunteer who will deliver boxes to children in North Knoxville. 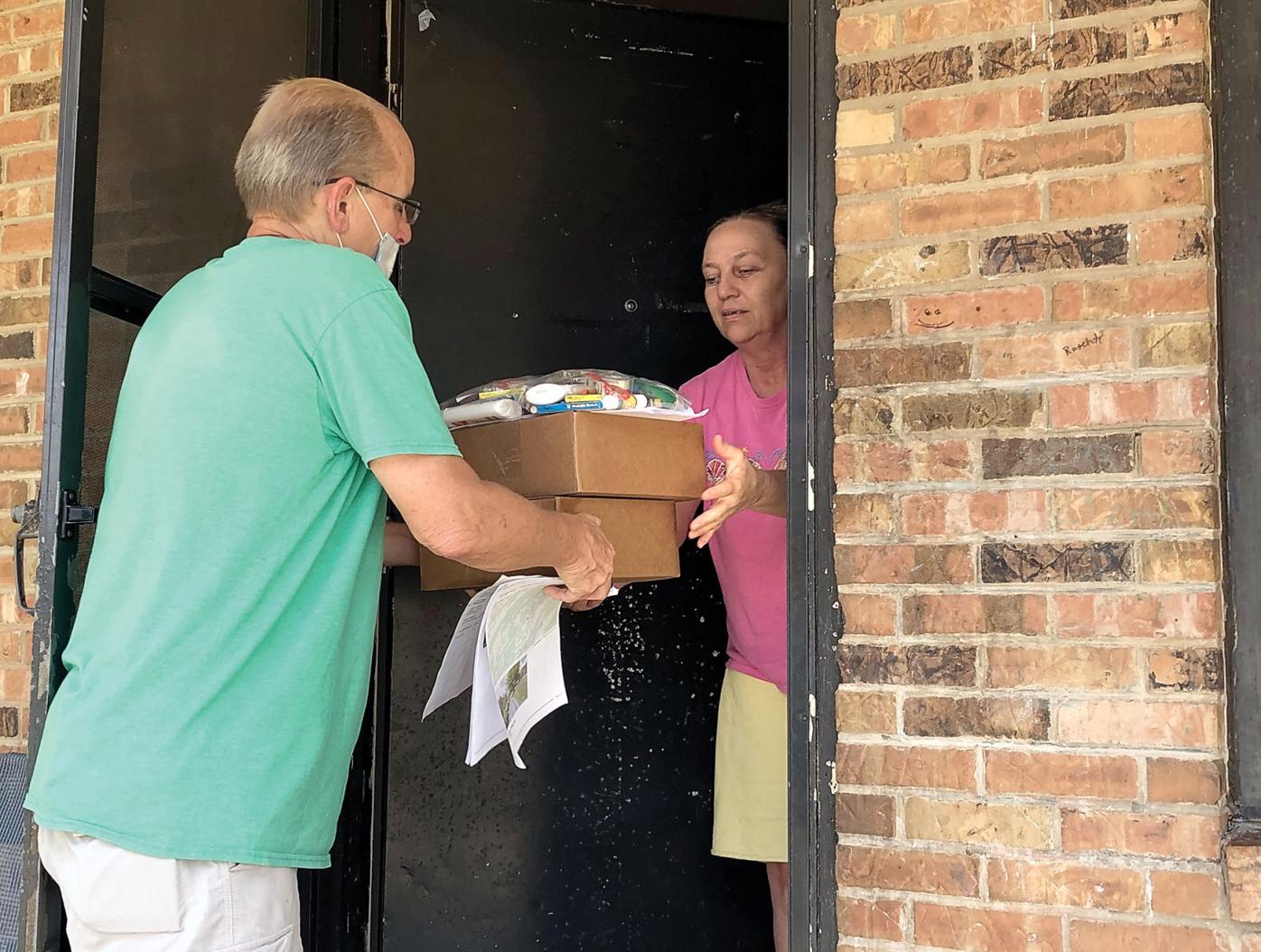 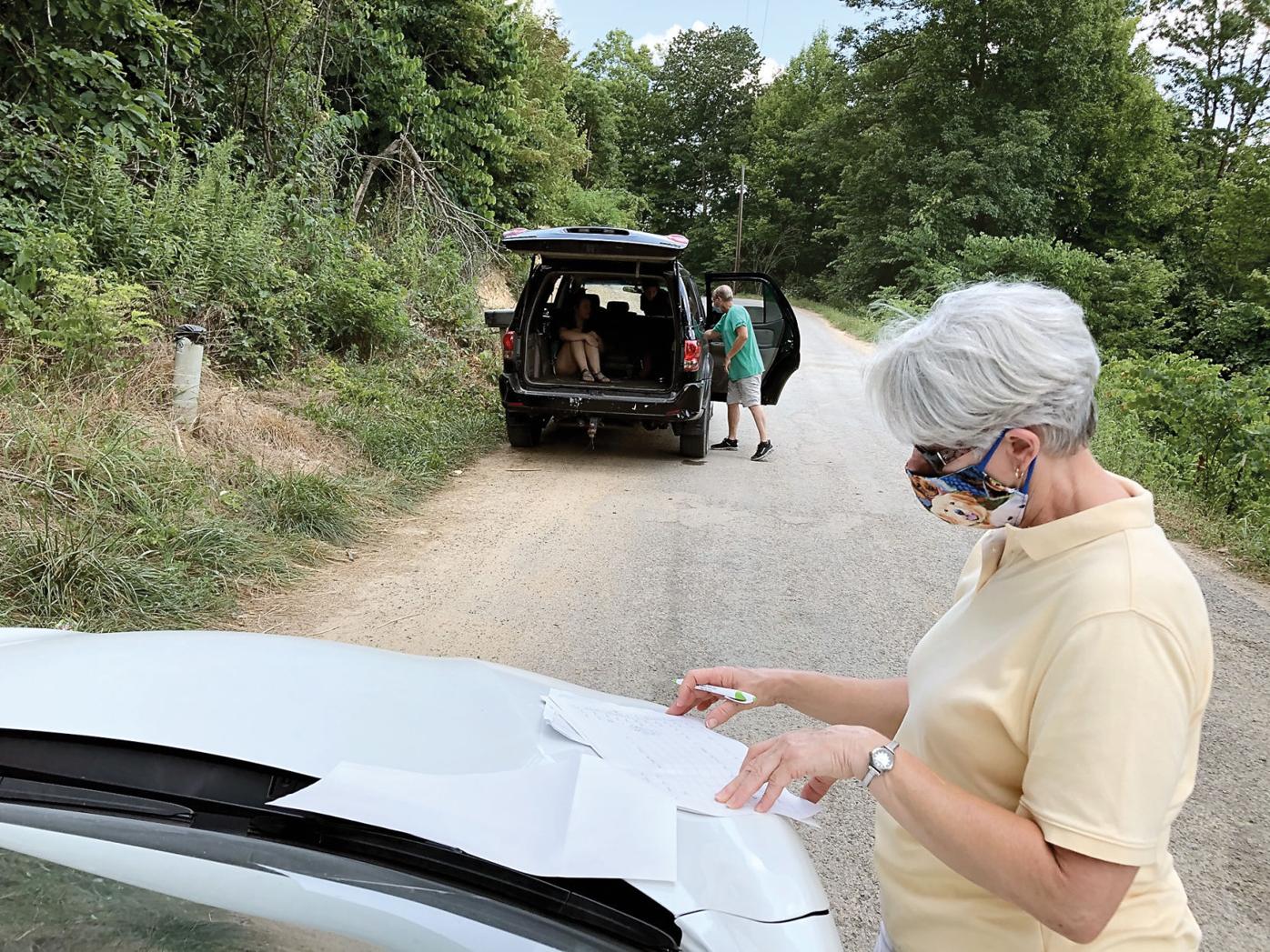 Lisa Nichols consults her lists on a rural road in Hancock County, Tennessee, as the Rev. Tom Robins pulls more camp kits from his car. 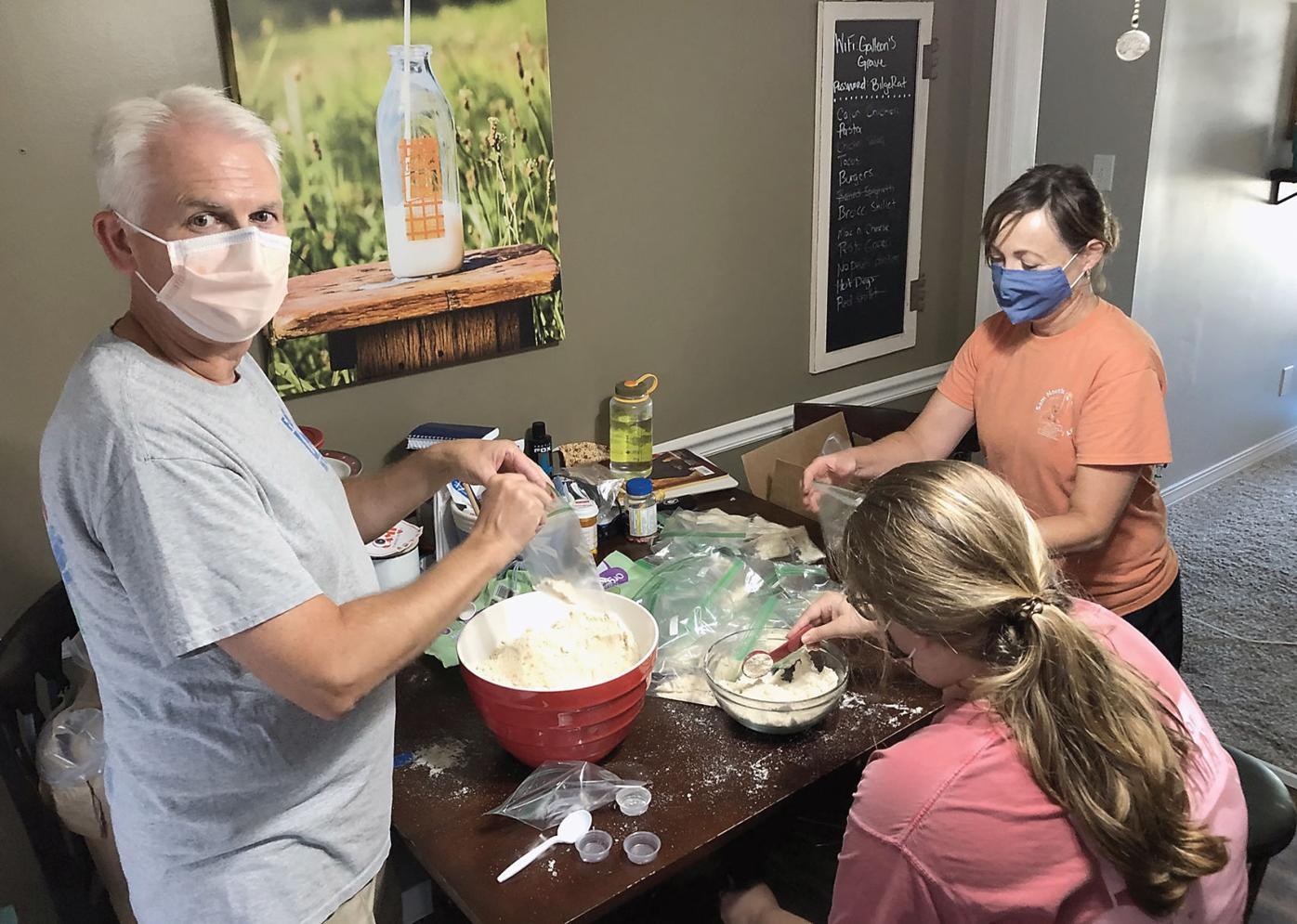 Whitney Winston (left) and Haleigh Davis load boxes from a trailer parked on the lawn at Winston’s home in Maryville.

Whitney Winston carries camp kits from a trailer parked outside her house to Mike Feely, a volunteer who will deliver boxes to children in North Knoxville.

Lisa Nichols consults her lists on a rural road in Hancock County, Tennessee, as the Rev. Tom Robins pulls more camp kits from his car.

Until this summer, Whitney Winston’s three-bedroom, two-bath house was just another family home in a Blount County neighborhood.

For the past few months, the brick house on a corner lot has become the power hub behind a ministry that is helping 1,400 children throughout East Tennessee and Southwest Virginia.

“I’m so thankful for the incredible volunteers, staff and partners for making this insanely huge project a reality,” Winston said.

Winston is director of “Camp in the Community,” a ministry of the Holston Conference of the United Methodist Church, headquartered in Alcoa.

This summer, a few staff and an army of volunteers are creating a camp experience that’s boxed and delivered to doorsteps of hundreds of children isolated at home. The boxed crafts, games, science projects, devotions and snacks are supplemented with videos on DVD, website and Facebook.

“It was hard in the beginning ... because we knew we wouldn’t get to interact directly with the children,” said Danaya Randolph, a camp staff member and recent Maryville College graduate. “But once we started getting pictures and postcards from them, it was encouraging.”

In its original format, Camp in the Community is a day camp that travels to low-income neighborhoods served by Holston Conference’s 853 congregations. Last summer, Camp in the Community provided activities, Bible study and meals for 1,200 children at 25 different churches in East Tennessee and Southwest Virginia.

However, when COVID-19 struck the United States, Camp in the Community almost didn’t happen at all in summer 2020.

To help stop the spread of the virus, in-person activities at many United Methodist churches and offices have been suspended since March, especially in counties where coronavirus cases are surging. All four of Holston’s overnight camps, including Camp Wesley Woods in Townsend, are closed this summer for the first time in their histories.

Winston, who started Camp in the Community in 2011, was convinced that her mobile day camp also presented huge risks for spreading the virus. “I felt like the population that we serve is at even higher risk than the other camps,” Winston said. “They often don’t have health care or the ability to pay if they get sick.”

Many of the children participating in Camp in the Community live with their grandparents or great-grandparents, who are at higher risk to COVID-19 due to their age, Winston added.

“I was afraid we would bring the pandemic to them, especially if they are living in an isolated area,” she said.

Yet Winston was concerned about the mental health of children who missed out on their last weeks of school and then went into a long, hot summer of pandemic isolation.

First, Winston applied for grants and church donations to support a new, pandemic-safe camp. A Personal Paycheck Protection loan also ensured that 13 young adult staff, many also economically vulnerable, could stay on board. Then the brainstorming began. Unable to meet in church buildings closed to in-person activities, Whitney and a core team of seven staff worked at her home in Maryville.

“It was definitely a little crazy, but so rewarding to work with like-minded people with the same mission in their hearts,” said Haleigh Davis, assistant camp director and a Maryville College graduate.

Getting onboard with a plan

By the end of April, the team had created a five-week program for campers to follow in their homes, including 20 activities, five devotionals and 30 videos per week.

Each child also received a food box from Second Harvest Food Bank of East Tennessee with coupons from Weigel’s stores for free milk. The programs were provided along with instructions in print and video, in both English and Spanish.The new at-home ministry experience was named “Camp is Where the Heart is.” About 50 of the camp kits were delivered to children through Jubilee Project, a nonprofit serving Hancock County.

“We at Jubilee Project keep hearing that our children and youth have nothing to do this summer,” said Lisa Nichols, a missionary and executive director of Jubilee Project. “We see the Camp in the Community kits as a chance for the children and youth to have something new to do, and the materials with which to do it. They are encouraged to use their minds in ways that may be new to many of them.”

According to the Tennessee Commission on Children and Youth, Hancock ranks last out of 95 Tennessee counties in median household income and 94th in child poverty.

“The way God has used this program to allow our staff to use their gifts and specific skills has been incredible to see,” said Winston, noting that Randolph, a biochemistry major, helped create the science projects. Kat Brinkley focused on self-care activities, while Carson Ball, an East Tennessee State University senior in radio and media, created the video scripts.

In Winston’s house, the work went on as late as 3 a.m. in the early days, as the staff began to realize how large the project actually is. The number of children registered for the camp increased as deliveries began and other children asked to be included.

“I knew it was going to be a massive undertaking, but it ended up being significantly more work than we expected,” Randolph said.

To help speed up the process, volunteers were enlisted to help prepare (in their own homes) the many step-by-step activities, such as cutting yarn for string art or assembling ingredients for no-bake cookies. Many of the volunteers are members of Fairview United Methodist Church in Maryville, Davis said.

The camp kits included self-addressed, stamped postcards that children were encouraged to send back to the staff, with feedback about their camp activities. Children also were invited to share their photos in a secure portal at CampintheCommunity.org.

“Even though we didn’t get to physically see the kids, knowing they got a lot out of the camp helped us get through,” Davis said.

The staff began to wrap up their work this week, as campers are receiving their last boxes for the summer. One of the staff’s final activities is to prepare camp kits for the children who live in Winston’s neighborhood.

Annette Spence is editor of The Call, the newspaper of Holston Conference.