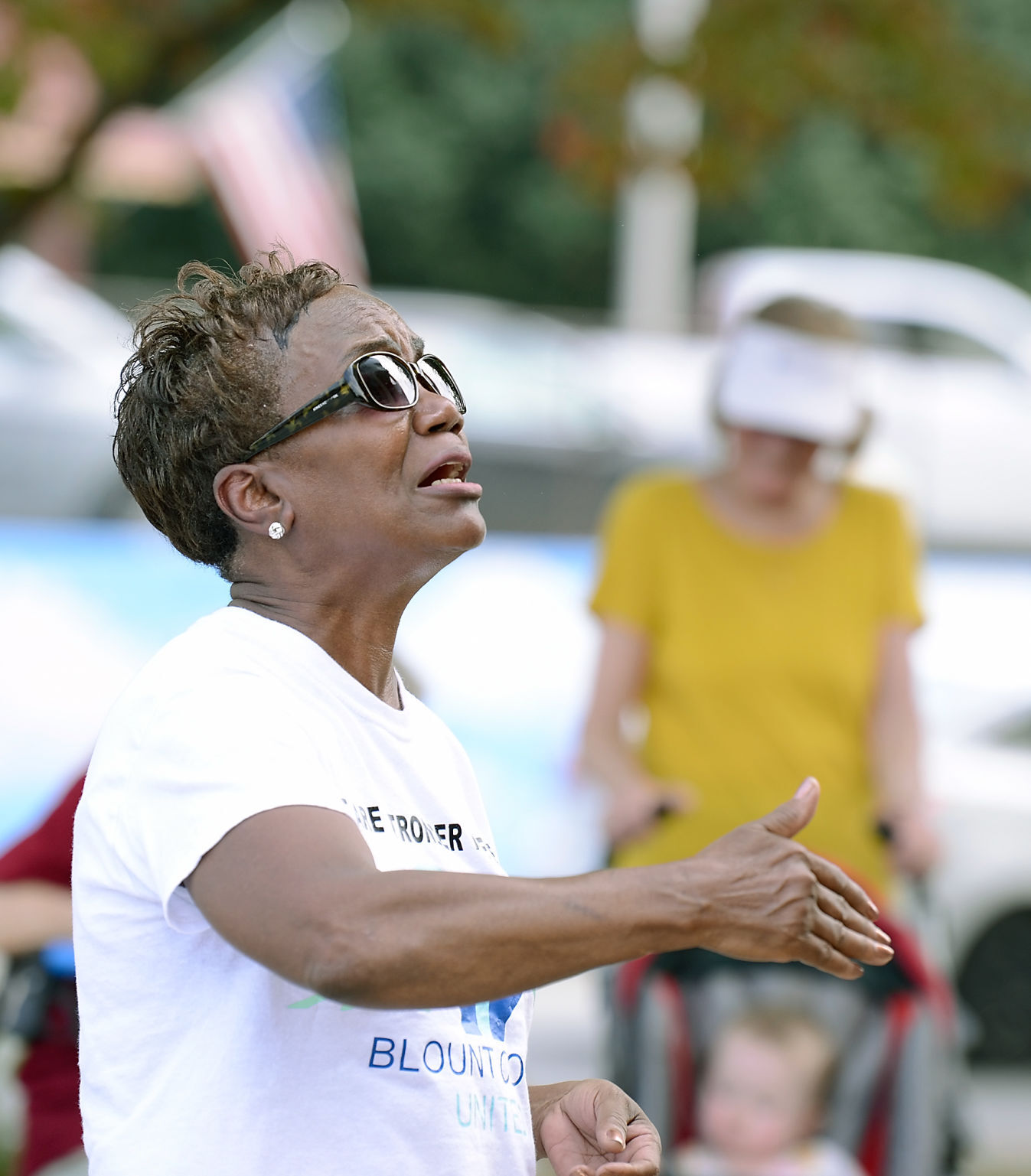 The Rev. Willa Estell delivers a passionate message in Sept. 2019, at the steps of the Blount County Courthouse after she and a large group of marchers made the Walk Against Racism from New Providence Presbyterian Church. 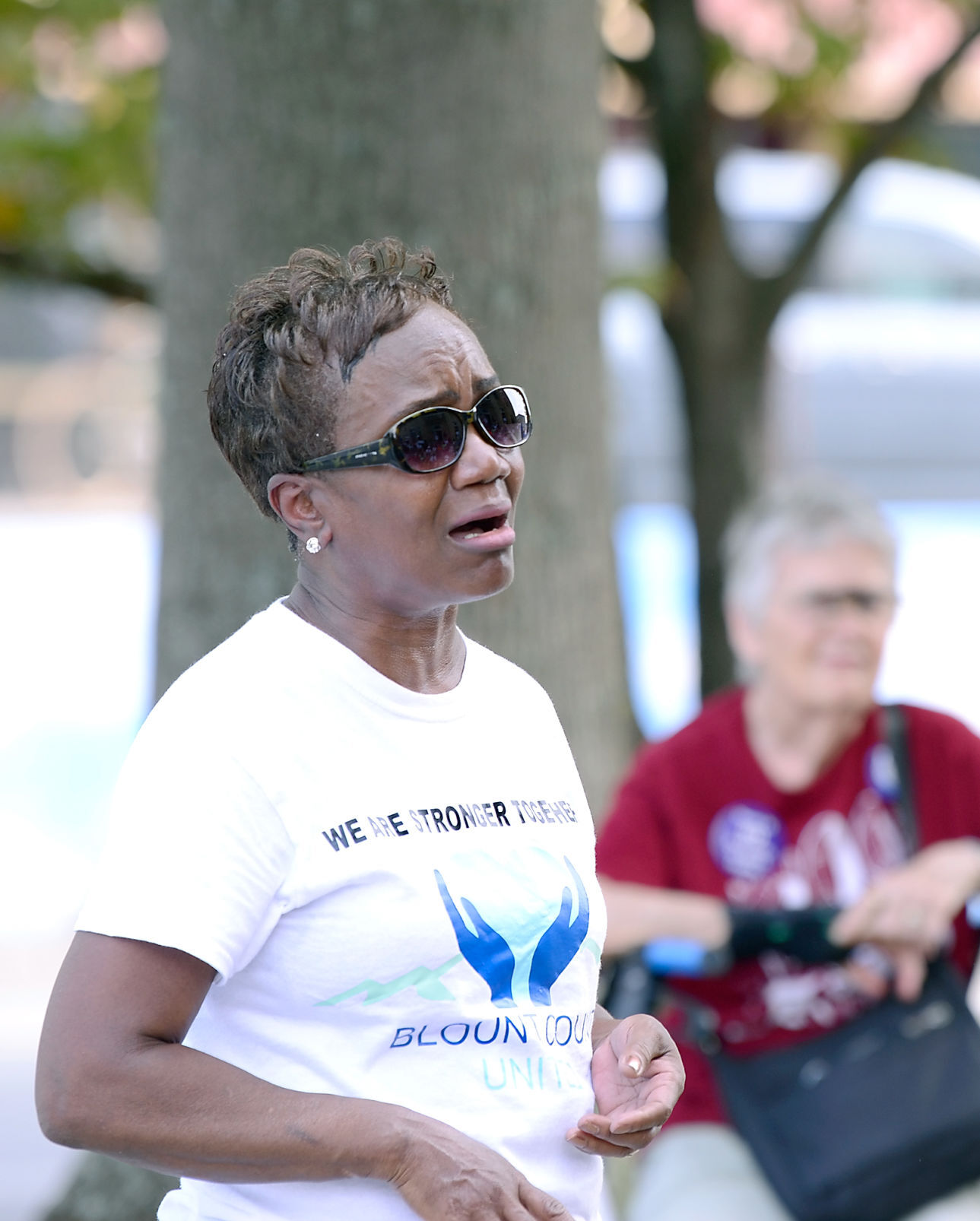 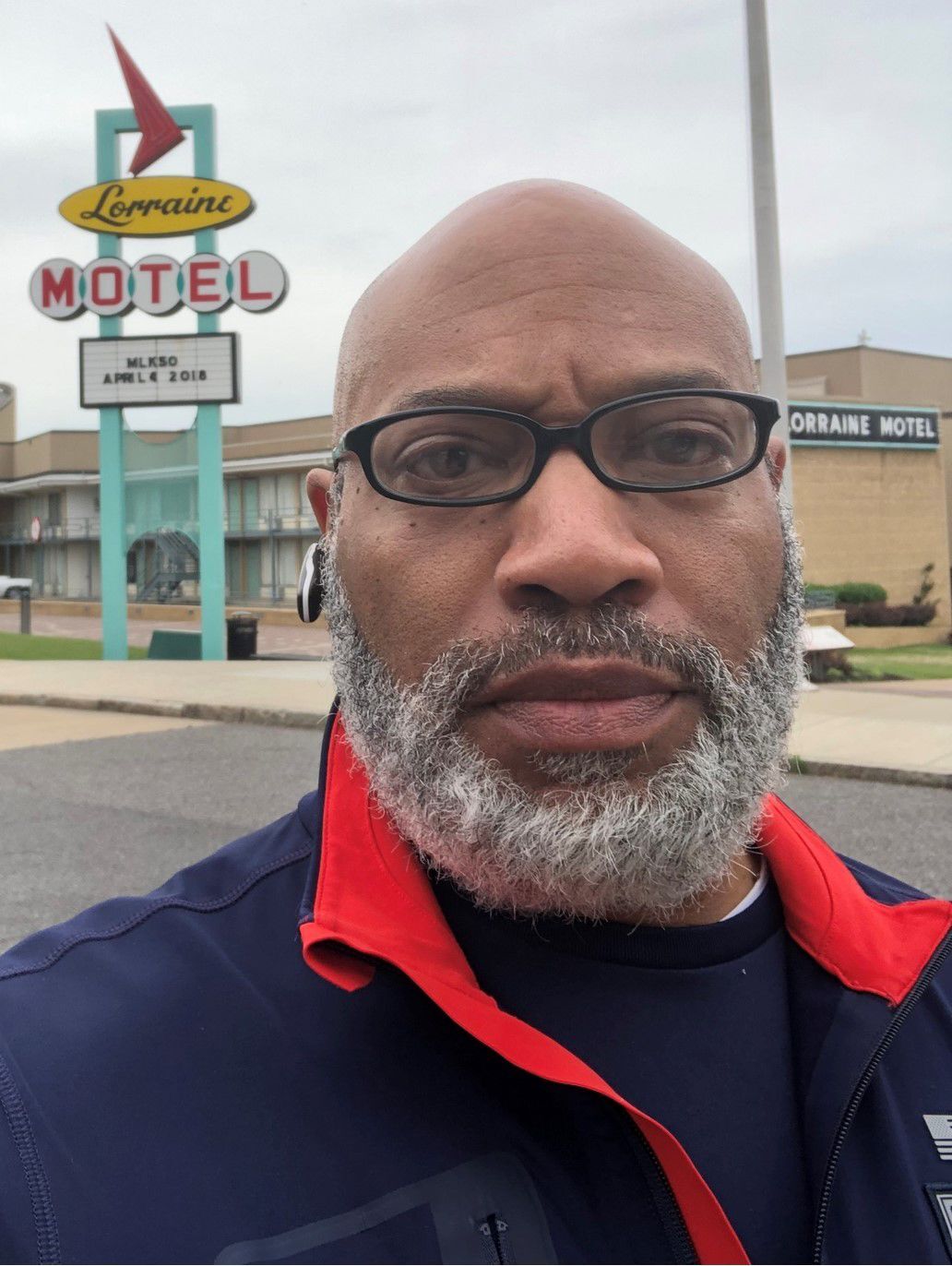 Charles Carpenter in front of the Lorraine Motel in Memphis where Martin Luther King was assassinated on April 4, 1968. 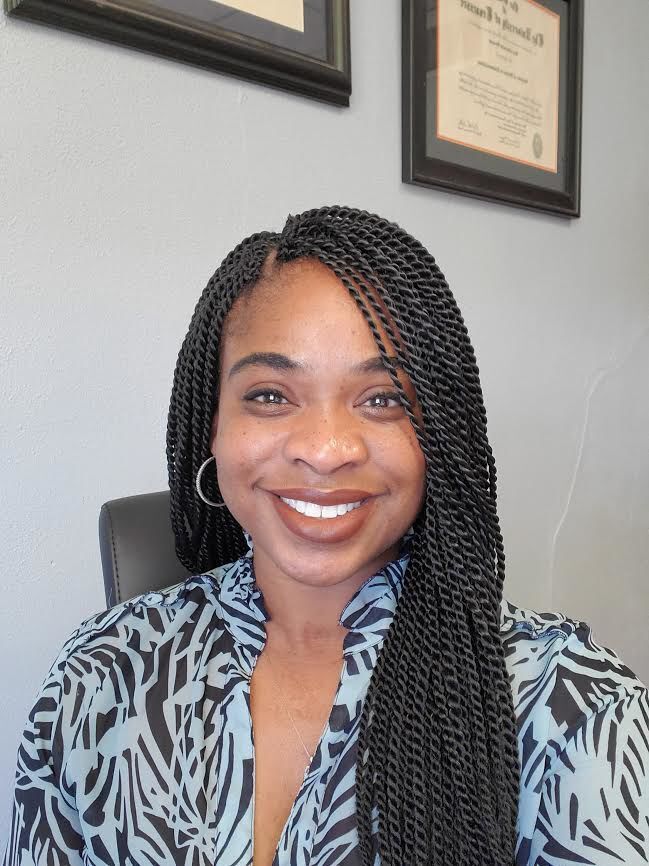 Keri Prigmore of Alcoa City Schools will help moderate the virtual education forum on Saturday to be presented by the Alcoa-Blount County NAACP and the Blount County Public Library. 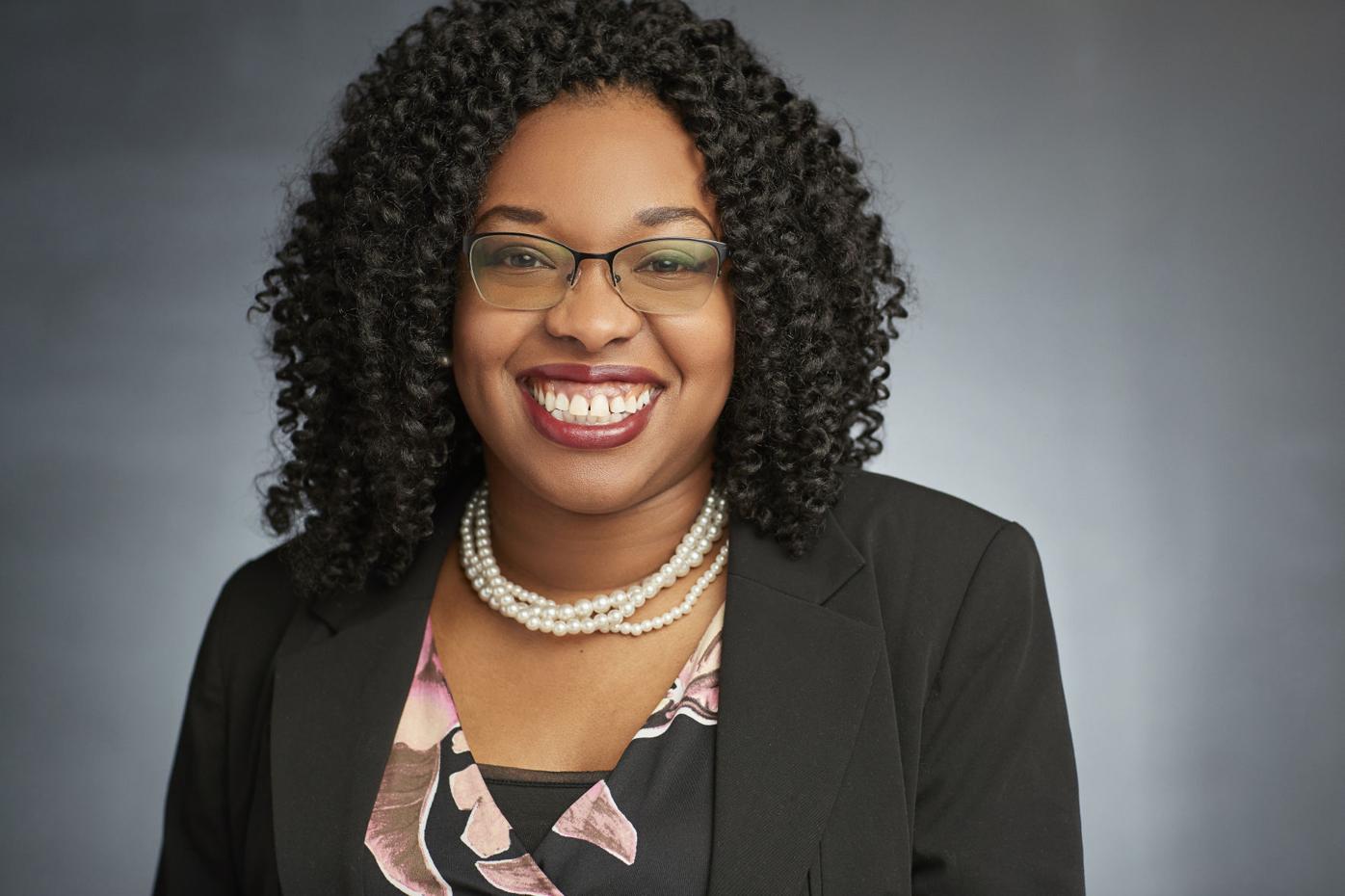 Erika Henderson will be the keynote speaker at the “Building Beloved Community: Facing History and Ourselves” virtual forum for educators. 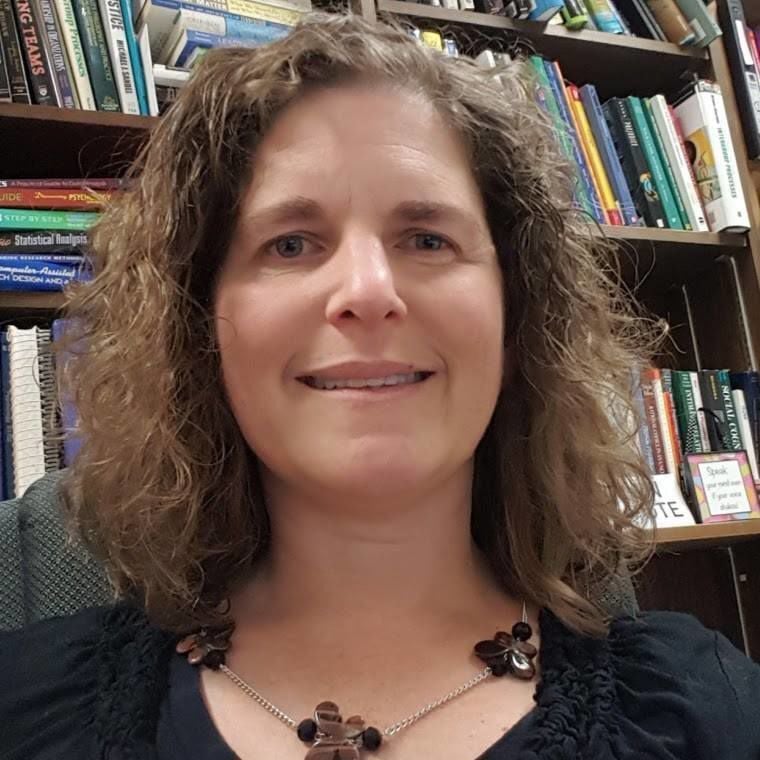 The MLK Kid and Families Program has been coordinated by Crystal Colter and others who wanted MLK activities for younger people. It will be held virtually from 2 to 3 p.m. on Saturday.

The Rev. Willa Estell delivers a passionate message in Sept. 2019, at the steps of the Blount County Courthouse after she and a large group of marchers made the Walk Against Racism from New Providence Presbyterian Church.

Charles Carpenter in front of the Lorraine Motel in Memphis where Martin Luther King was assassinated on April 4, 1968.

Keri Prigmore of Alcoa City Schools will help moderate the virtual education forum on Saturday to be presented by the Alcoa-Blount County NAACP and the Blount County Public Library.

Erika Henderson will be the keynote speaker at the “Building Beloved Community: Facing History and Ourselves” virtual forum for educators.

The MLK Kid and Families Program has been coordinated by Crystal Colter and others who wanted MLK activities for younger people. It will be held virtually from 2 to 3 p.m. on Saturday.

If you can remember your third grade teacher from decades ago and what she taught you but can’t recall the name of a coworker from five years ago, there’s a justifiable reason.

So says the Rev. Willa Estell, someone who credits her fourth grade teacher for helping shape who she became as an adult.

“It wasn’t just the education, but also the self-esteem,” Estell explained. “She taught us to be proud of who we are.”

Now this pastor of St. Paul AME Zion Church in Maryville has sought to spread that message of racial equality and unity for decades, following the guidelines of Martin Luther King in seeking a Beloved Community. She and others in Blount County wanting to honor his legacy have come together to present the MLK Celebration Education Forum that will be held virtually on Saturday, Jan. 16, just days before MLK is honored on a national holiday.

The event, being called “Building the Beloved Community: Facing History and Ourselves,” is being hosted by the Alcoa-Blount County NAACP and Blount County Public Library. The session begins at 9:45 a.m. Saturday and concludes at 12:30 p.m.

There are two components; the first is geared toward educators wanting to learn how to approach topics of racism and resulting injustices. The featured speaker will be Erika Henderson from the organization Facing History and Ourselves. In addition to Henderson’s presentation on teacher resources, this virtual presentation also will include roundtable discussions with all three local directors of schools and remarks from retired longtime Alcoa teacher Marjorie Stewart.

The second part of this event is the MLK Kid & Families Program for children and youth that takes place virtually, from 2-3 p.m. Young people will share their favorite books on MLK and other great historical leaders. Both sessions are open to the public.

Charles Carpenter, a resident of Blount County and member of the local NAACP, will have a role in this virtual discussion for educators. He wrote the resolution that was adopted by the national NAACP on hiring more diverse faculty and staff by school systems. The resolution stipulates that at least one person of color be interviewed for each hiring of teachers and administrators.

Carpenter earned his bachelor’s degree in political science from Morehouse College and his doctor of jurisprudence from the University of Tennessee at Knoxville. He taught law at UT and Vanderbilt University. He also has lectured at Maryville College.

As someone who has done mounds of research, Carpenter said Blount County can do a much better job when it comes to hiring teachers and administrators of color. He has to look no further than his own household for proof.

“I have a daughter who is 14 and gone through Blount County Schools,” he said. “She is a ninth grader and has never had a teacher of color. Not one. And in the schools where she attended, there has been only one teacher of color.”

It is Carpenter’s belief this not only hurts minority children but gives all students a false sense of the world.

“If we have students who go all the way through, from kindergarten through high school and never see a Black administrator, never have a Black teacher and there are just a handful of students who are of color, they go into the world without seeing the possibilities that people of color can be teachers and can be people who can hold positions of responsibility, that that they can be smart and excellent in anything other than sports.”

Students of color in that environment end up with a false sense of inferiority, Carpenter added. And when any students growing up in that skewed world then leave the confines and adventure out into the larger world, they are not prepared for what they see in more diverse cultures, he said.

Carpenter said the way to improve is to hire more faculty of color. He said many school systems rely on word-of-mouth or recommendations from current staff to fill vacancies. He said historically Black colleges would welcome the opportunity to work with school officials to provide viable candidates. Carpenter said he would happily be a liasion.

Katy Chiles is an associate professor in the English Department at the University of Tennessee and teaches English and Africana studies and critical race theory. She has worked with Crystal Colter and Dustin Park on this upcoming event. As a white woman with a white child, Chiles said she wants her child to know Black history in full, from enslavement and segregation to great achievements.

“These histories are difficult to teach, and we are thrilled that Facing History and Ourselves gives educators free resources that meet Common Core Standards,” she said.

A roundtable discussionKeri Prigmore, director of attendance and coordinated school health for Alcoa City Schools, has been an administrator and educator for years and has been turned down for upper-level positions within local schools. She will help moderate the roundtable discussion that will include local directors of schools.

Like Carpenter, Prigmore said her children have gone through a local school system never having a teacher of color. Prigmore, herself a graduate of Maryville High School, said she was never taught by one either, nor her brother, or mother, Marjorie Stewart.

She said Martin Luther King would look at where this nation has come with mixed feelings.

“I think Dr. King would be disappointed but still hopeful,” she said. “I sit here and think about the pastor who was just elected. He is the head pastor at Dr. King’s church.”

Prigmore said progress in race relations was made over the years but people got complacent. Today’s racial strife is a wakeup call that work isn’t done, she said.

Dustin Park has been instrumental in this MLK Celebration Forum, securing the keynote speaker, Erika Henderson. He is a video editor, vice president of the Sam Houston Elementary School PTO and co-cubmaster of Pack 81 Cub Scouts.

Over the years, he has worked with friends Crystal Colter and Katy Chiles on initiatives related to learning and talking about racial justice issues. He and Colter started a book club where parents and kids read books on diverse topics and meet for discussion.

He learned about Henderson’s organization Facing History and Ourselves more than 10 years ago when he lived in Chicago. “I had the opportunity to see the impact it had on the students who learned from the lessons Facing History provided to teachers,” he explained.

Henderson has been part of the Memphis program team at Facing History for three years.

“Over the last 20 years of her career, she has coached teachers, led schools as principal, taught students and served communities,” Park said. “She believes that a high-quality education is the next civil rights movement and it is our responsibility as educators to embrace and challenge others to always seek what is right for all students.”

Park, 40, said there are positives that can come out of the intense focus on race and racism in this country. Conversations and actions can help overcome the injustices, he said.

Crystal Colter is coordinating the children/youth portion of this presentation. A professor at Maryville College, she said it came about after she and some other parents of young children realized there were no MLK events designed for younger people.

Six or so presenters will share books that have helped them better understand the experiences of others. Teachers and websites always have been good resources to find books that explain the world, including complex issues like racism, Colter said. She said we have to look at the complexities through mirrors and windows.

“We need to see ourselves, like mirrors, in the stories we read and we need to see windows into other people’s experiences,” she said.

The Alcoa-Blount County NAACP will present its event to honor the legacy of Martin Luther King. The first session, for educators, will be held from 9:45 a.m. to 12:30 p.m. on Saturday, Jan. 16, virtually. The link to sign up is http://bit.ly/2021FacingHistory.

The second session is for children and youth, from 2 to 3 p.m., also virtually. The link to sign up is http://bit.ly/2021MLKKids. There is no cost to attend either sessions. Youth will share some of their favorite books on diversity.