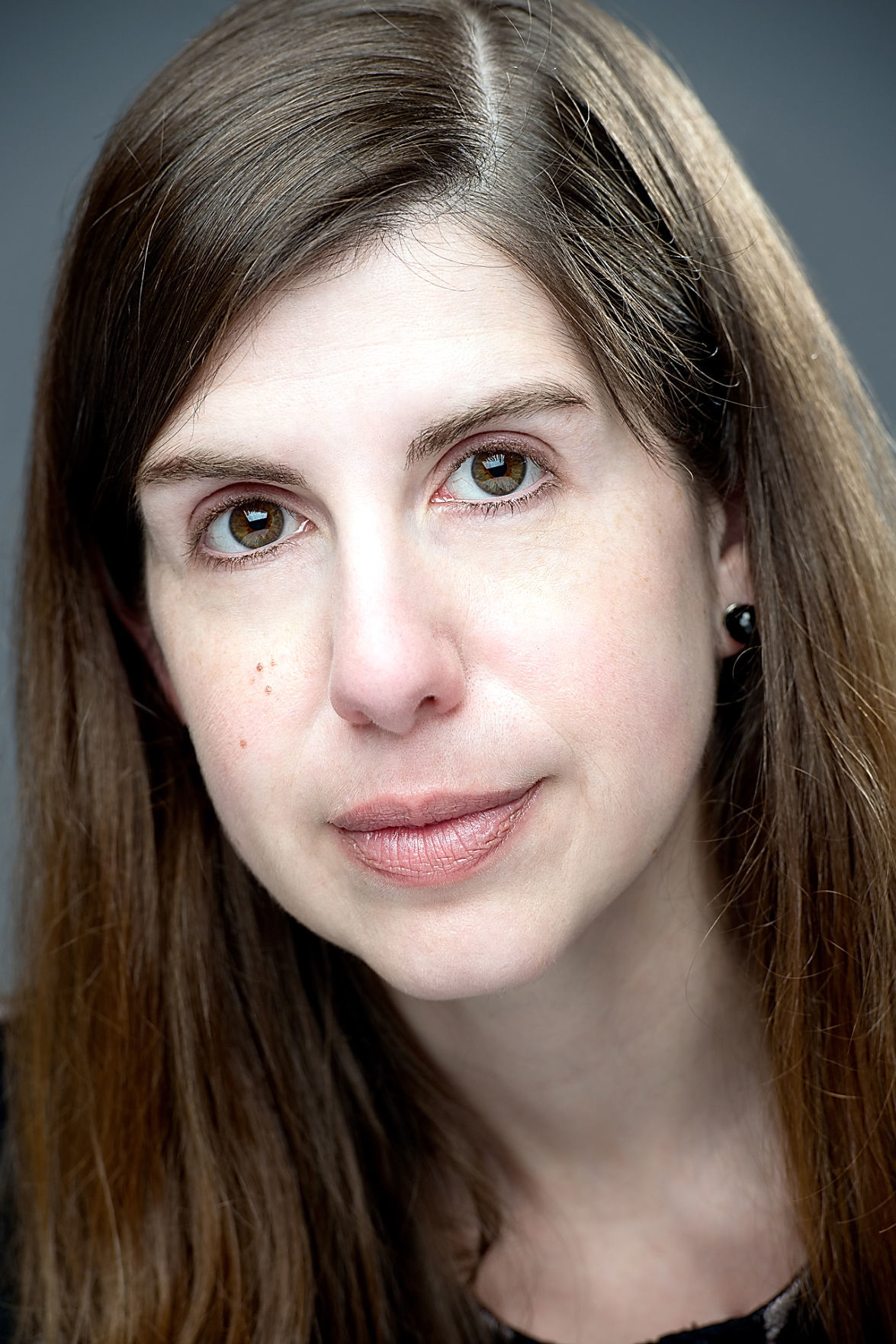 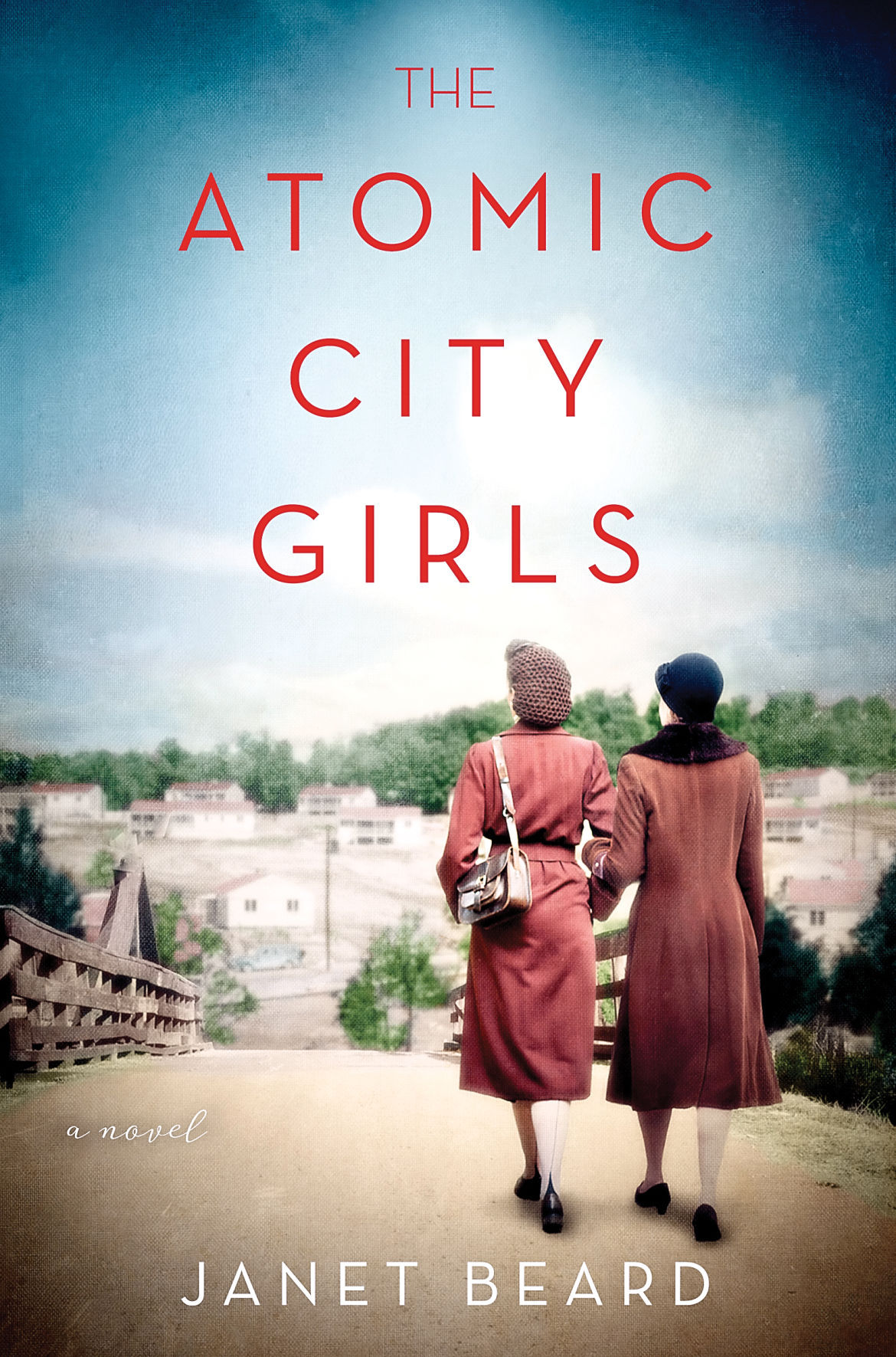 “The Atomic City Girls” is the latest book by Janet Beard. 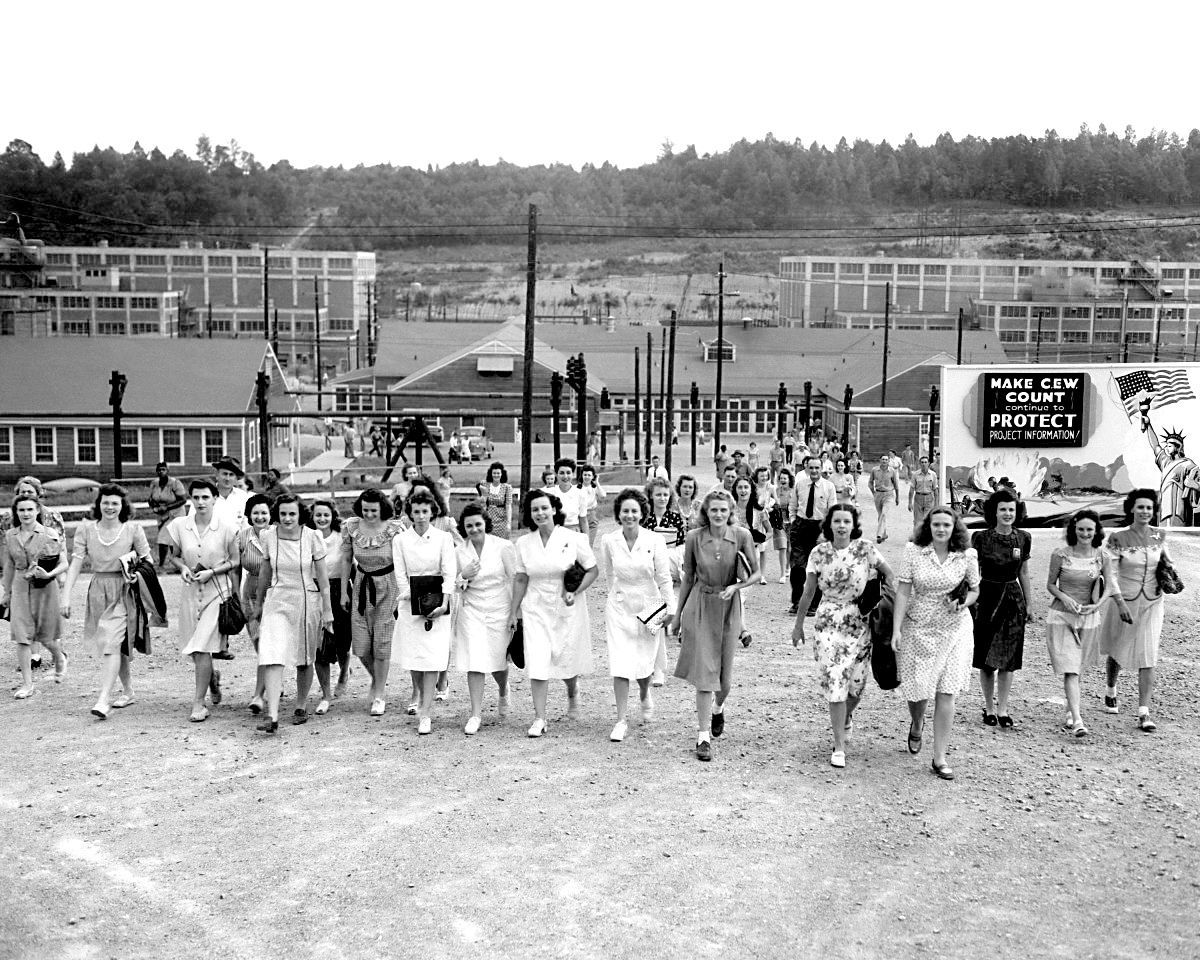 Workers change shifts at the Y-12 uranium enrichment facility in Oak Ridge in 1944. The town of Oak Ridge was established by the Army Corps of Engineers as part of the Clinton Engineer Works in 1942 on isolated farm land as part of the Manhattan Project. The site was chosen for the X-10 Graphite Reactor, used to show that plutonium can be extracted from enriched uranium. 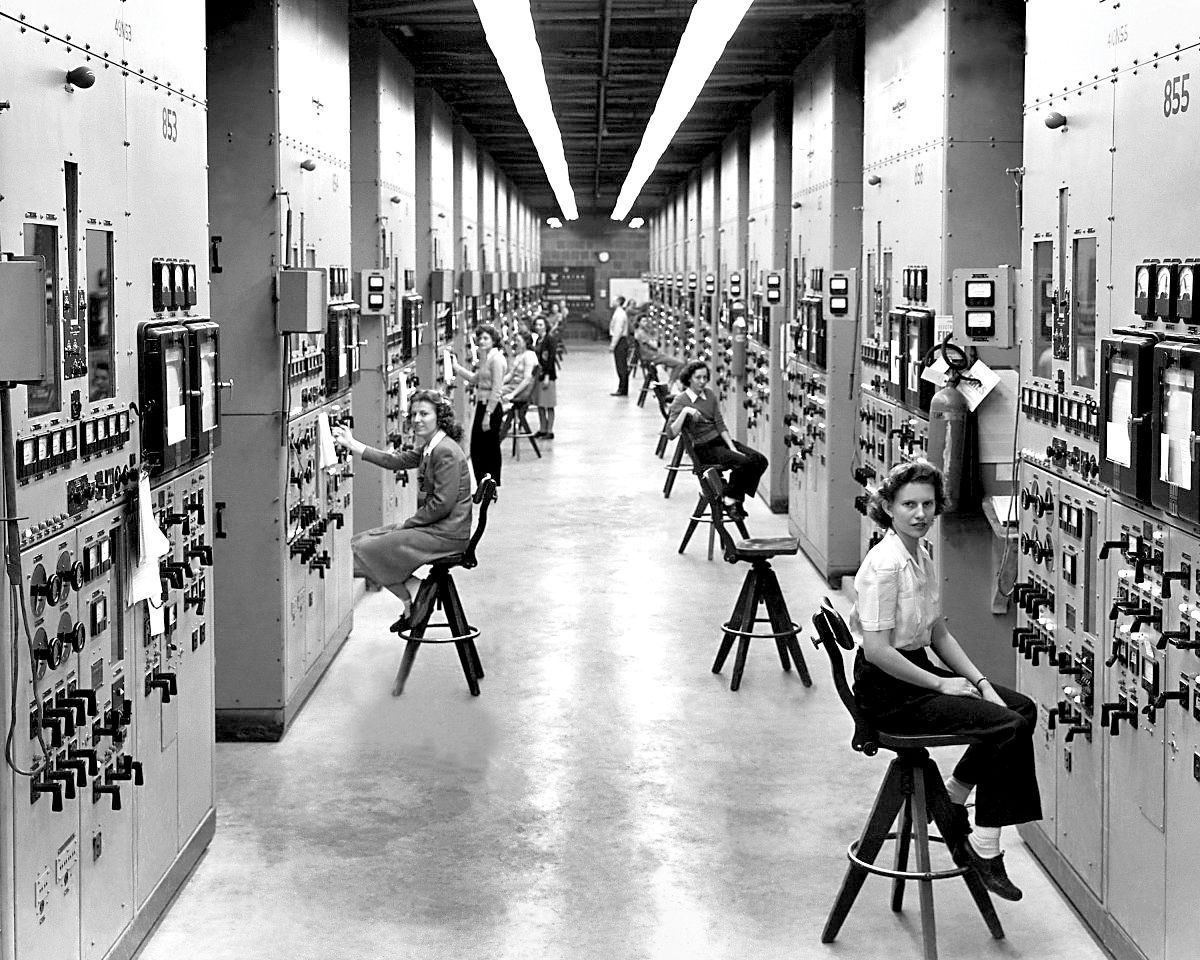 Calutron operators at their panels, in the Y-12 plant at Oak Ridge in 1944. The calutrons were used to refine uranium ore into fissile material. During the Manhattan Project effort to construct an atomic explosive, workers toiled in secrecy, with no idea to what end their labors were directed. Gladys Owens, the woman seated in the foreground, did not realize what she had been doing until seeing this photo in a public tour of the facility 50 years later.

“The Atomic City Girls” is the latest book by Janet Beard.

Workers change shifts at the Y-12 uranium enrichment facility in Oak Ridge in 1944. The town of Oak Ridge was established by the Army Corps of Engineers as part of the Clinton Engineer Works in 1942 on isolated farm land as part of the Manhattan Project. The site was chosen for the X-10 Graphite Reactor, used to show that plutonium can be extracted from enriched uranium.

Calutron operators at their panels, in the Y-12 plant at Oak Ridge in 1944. The calutrons were used to refine uranium ore into fissile material. During the Manhattan Project effort to construct an atomic explosive, workers toiled in secrecy, with no idea to what end their labors were directed. Gladys Owens, the woman seated in the foreground, did not realize what she had been doing until seeing this photo in a public tour of the facility 50 years later.

When you’re 8, the things that keep you up at night might be thoughts of what could be hiding under the bed or lurking in the closet.

Not so for Janet Beard. It was atomic bombs.

Now the mom of a 3-year-old daughter, she said she remembers her elementary school class going to a museum in Oak Ridge where she learned about the Manhattan Project and Oak Ridge’s key role in enriching uranium for the atomic bomb. That’s heavy stuff for an 8-year-old. She was living in Sevier County at the time.

“I couldn’t sleep that night,” she said. “It really freaked me out. I wasn’t aware of atomic bombs before that.”

Then, about 11 years ago, this 1997 graduate of Maryville High School who went on to earn her undergraduate degree in screenwriting at New York University was watching television when she came across a documentary on the Secret City and its workers. Now an adult, the subject was intriguing, not frightening.

The process of researching all she could about that important period in our history began soon after. She listened to oral histories from women who worked on the Manhattan Project. There were plenty of other resources out there, as well. After thorough digging and creating some characters of her own, Beard penned a historical fiction novel, “The Atomic City Girls.” It will be on store shelves in February.

Beard now calls Columbus, Ohio, home. Her husband, Declan Smithies, is an associate professor of philosophy at Ohio State University. She teaches writing part time, writes just about every day and cares for her toddler daughter.

Not even on the map

“The Atomic City Girls” begins in 1944 when 18-year-old June Walker climbs aboard an unmarked bus, headed for a city that doesn’t even exist on the map. Oak Ridge literally sprang up from the ground in a relatively short period of time. At its busiest, 75,000 people were living there. And most had no idea the role they would play in World War II.

In Beard’s book, Walker joins hundreds of other young women who are handling large equipment without even knowing its purpose. The women often spend their evenings out, at places like bowling alleys and canteens. Checking out the men assigned there is another pastime. The characters Beard creates weave the story of how this Secret City came to exist and how it affected the nation.

Her work shouldn’t be confused with the nonfiction book, “The Girls of Atomic City: The Untold Story of the Women Who Helped Win World War II.” Its author is Denise Kiernan.

This isn’t Beard’s first book. “Beneath the Pines,” was published in 2008 and tells the story of three generations of women in Virginia. The author started on “The Atomic City Girls” around the time “Beneath the Pines” made its debut.

“I was looking for a new project at the time,” Beard said. “I thought, ‘Wow, what a great story.’ It’s a women’s story and history, and I love both.”

She began her career as a screenwriter, but became a little frustrated when none of what she was writing was making it to the screen. She earned her master’s degree in creative writing at The New School in New York and took that path, instead. It was the right one.

With screenwriting, if no one makes it into a movie, it’s like the work doesn’t exist, Beard explained. Not so with stories and books. They are finished products.

Now that Beard has her second book published, she is pouring her talents into the next project, a series of stories set in East Tennessee about three generations of one woman’s family. Beard’s love of Appalachian music and murder ballads will play into this one.

“I’ve loved folklore and folk music for as long as I can remember,” Beard explained. “The ballads particularly intrigue me because of the stories they tell. So many songs are about young women being murdered, some with roots in the British Isles and others homegrown in Appalachia. I’m interested in why and how people told these particular stories and how telling them both preserves and changes them.”Beard left Maryville shortly after graduating from MHS. She was mostly known here by her family nickname, “Jenny.” She lived in New York for a few years, met her husband, and then moved to Australia with him. The couple spent three years there. The family has been in Columbus, Ohio for about 10 years. And winter has been brutal there, just like here. But Beard points out one small fact: Up there, they are used to it and ready when it strikes.

The daughter of Bill Beard and Vandy Kemp, the author is grateful for the encouragement they gave her early on and for her teachers at MHS, specifically Cynthia Freeman. Freeman taught Beard’s sophomore and senior year English classes. She was someone who let Beard know she could become a successful writer.As for who will enjoy “The Atomic City Girls,” Beard says those of us living right here in East Tennessee will find it revealing and entertaining. Women who were working in Oak Ridge at the time will surely want to pick it up. Veterans of the war and those who don’t know anything about Oak Ridge’s role in WWII will find things to love about this book.

It is published by HarperCollins. Beard’s first book had an independent publisher, Two Dollar Radio. She said the best thing to happen to her as a new writer was to find the right agent, which wasn’t easy.

“It took a very long time,” she said. “I did it the old fashioned way. I had no connections so I just sent out letters until I found the perfect person.”

That ended up being about 40 letters, Beard said. She has no regrets about how long it took or getting all of those rejection letters. That makes success all the sweeter.

About those screenplays she wrote, who knows what will happen to them. Someone might discover them one day and Beard will be famous. She said they are buried for now, collecting dust on a hard drive. Maybe her novels will be what lands her into fame and a higher tax bracket.That isn’t the real goal here. Beard hasn’t forgotten the best piece of advice she’s received: Live life to the fullest and be open to new experiences — even if that means writing slower than she would like.

Janet "Jenny" Beard will present a program about her  latest book, "The Atomic City Girls" at 11 a.m. on Saturday, Feb. 17 at the Blount County Public Library, 508 N. Cusick St., Maryville. Beard is a 1997 graduate of Maryville High School. She currenty resides in Columbus, Ohio with her husband and their 3-year-old daughter.

The book is published by HarperCollins and will be out in early February.