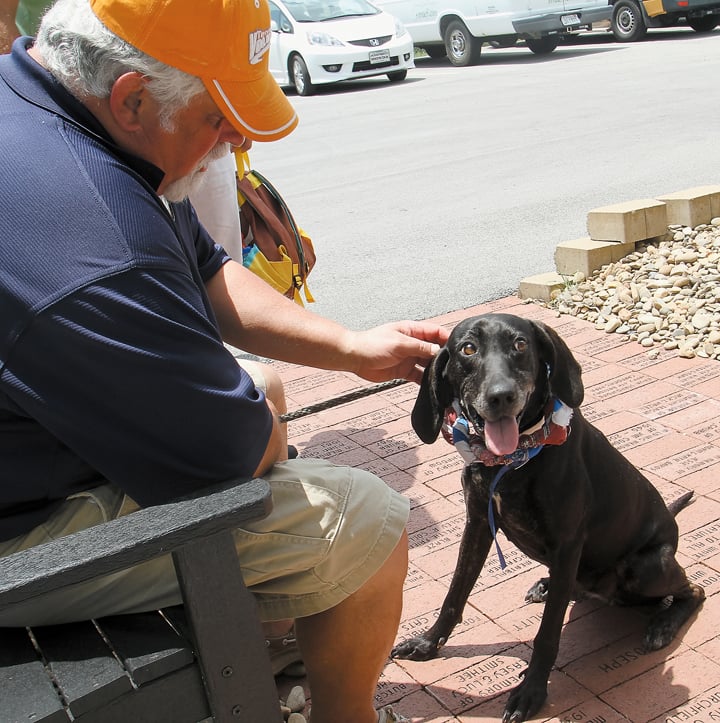 Marc Fair pets Annie, the newest member of the Fair household, adopted through the Pets for Patriots program at the Blount County Animal Center by retired Army Col. Karen Fair. This is the first Pets for Patriots adoption since the center became an approved shelter for the program. 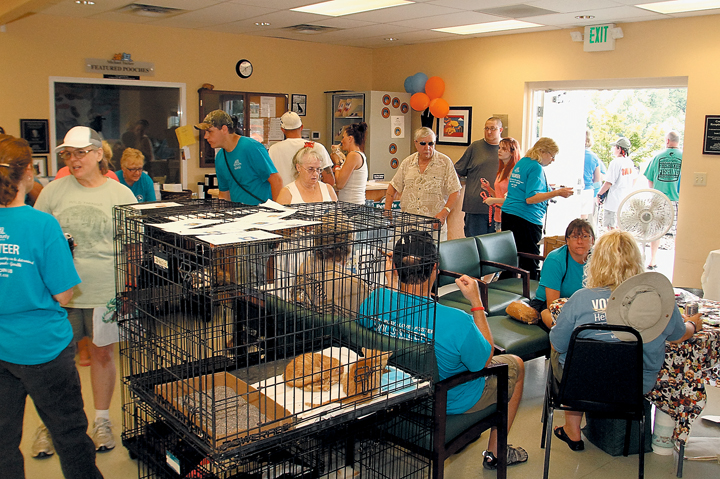 Marc Fair pets Annie, the newest member of the Fair household, adopted through the Pets for Patriots program at the Blount County Animal Center by retired Army Col. Karen Fair. This is the first Pets for Patriots adoption since the center became an approved shelter for the program.

When the Blount County Animal Center officially announced its partnership with Pets for Patriots in early July, little did retired Army Col. Karen Fair know that she would be the first to adopt a pet under the program in Blount County.

Fair, a 25-year Army veteran, hadn’t even planned on adopting another dog after the death of her beloved black Labrador retriever, Bear, in September 2011, but an unexpected trip to the center with her daughter set in motion circumstances Fair described as “an answer to prayer.”

“My daughter (Jennafer Baker) called and said ‘I’m picking you up Saturday morning,’” for a trip to the Animal Center to find a dog for Fair’s almost-2-year-old grandson, Ryan Baker, Fair said. “I had no intention of getting a dog, but when I got there, it was the most magical thing when I looked into the eyes of this baby.”

Fair didn’t know about Pets for Patriots until she talked with center volunteers and learned that she might be eligible to adopt a pet through the registered 501(c)3 charitable organization with its mission of helping U.S. military personnel find, afford and adopt hard-to-place shelter animals. Pets for Patriots allows adoptions at approved facilities for dogs or cats meeting the criteria of being more than 2 years of age, more than 40 pounds in weight or with special needs, regardless of age. The military personnel may be in any stage of their career, active duty or retired, from any branch of service.

The newest member of the Fair family is settling in nicely since arriving at her new home on July 12. Sunkist, renamed Annie, is about 6 years old. She is a Plott hound although Fair said her resemblance to Bear in looks and in mannerisms is uncanny. That’s what first drew her to Annie.

“She looks exactly like Bear, right down to the little gray on her paws,” Fair said.

Because Annie wouldn’t eat at first, Fair’s husband, Marc, scrambled eggs and put beef in it. “I want to tell you, she ate that!” Fair said. As Annie has become more comfortable, she is now eating her dog food but she is still a finicky eater. Fair said if they put certain treats in the food, Annie picks them out and lays them to the side. “She is a very intelligent dog,” Fair said. Annie is also very good with little Ryan, the main criteria the Fairs considered before adopting her.

On July 12, during an animal adoption event held at the Blount County Animal Center, this first Blount County Pets for Patriots adoption was made official. Fair said, “I felt like a rock star!” and added, “I really champion what they are doing. It’s unbelievable, so great there.”

Fair said the loss of Bear, a furry family member for 17 years, left a hole in the hearts of both her and her husband. That’s why they had been hesitant to adopt another dog — and then, Annie came into their lives.

“She is just precious,” Fair said. “It’s like God just reached down and said, ‘Here, I’m going to give you your dog back.”

Annie, like Bear had been, is much more than a loving companion. Fair has some serious health issues that leave her in chronic pain, and having Annie helps her deal with that. Fair said, “This baby is exactly what I needed. It’s good to have this dog to love and take care of — and she’s a lover. We are so blessed to have her.”

Mary Humphrey, a volunteer at the Blount County Animal Center and president of the Smoky Mountain Animal Care Foundation, which supports the center, said any military personnel interested in adopting from the center or other Pets for Patriots-approved adoption facilities in surrounding counties must first visit petsforpatriots.org and sign up. After having military service verified and several other conditions met — honorably discharged, no history of felony convictions or animal cruelty or abuse, for example — the adopting Patriot is issued a letter and directed to the nearest Pets for Patriots partner shelter or rescue. Humphrey said the center will then interview the potential adoptive pet parent and make sure the animal they choose is a good fit for their home and lifestyle. After the adoption contract is finalized, a copy is sent to Pets for Patriots and the adopting Patriot is eligible to receive a minimum, ongoing 10-percent discount on veterinary fees for the life of the adopted pet at partner veterinary officers. In addition, a one-time gift card from a major pet retailer is provided to help with initial purchases of pet food, supplies, toys and other basics. Discounts on pet-related items are also available.

At the Blount County Animal Center, Director Charles Rafford, a veteran himself, is waiving adoption fees for those approved for Pets for Patriots adoptions.

Humphrey said there has been a lot of interest since The Daily Times first announced the program on July 6. “For example, we had a gentleman come in and wanted to adopt two of our highly unadoptable dogs, and we have another one coming through. A couple of veterans have come forward who are volunteers and they really want to help. So it’s really taking off. ... But one thing we are having trouble with is that people are not understanding that they really need to register with Pets for Patriots before they come to the shelter.” Until the center receives the appropriate forms from Pets for Patriots, they cannot complete the adoption — and in the meantime, the animal requested may be adopted by anyone else who expresses an interest. “If they register online beforehand and have their verification letter from them, that will really expedite the adoption and their benefits.”

Note: Military personnel should apply to Pets for Patriots prior to visiting a partner shelter; visit petsforpatriots.org for details