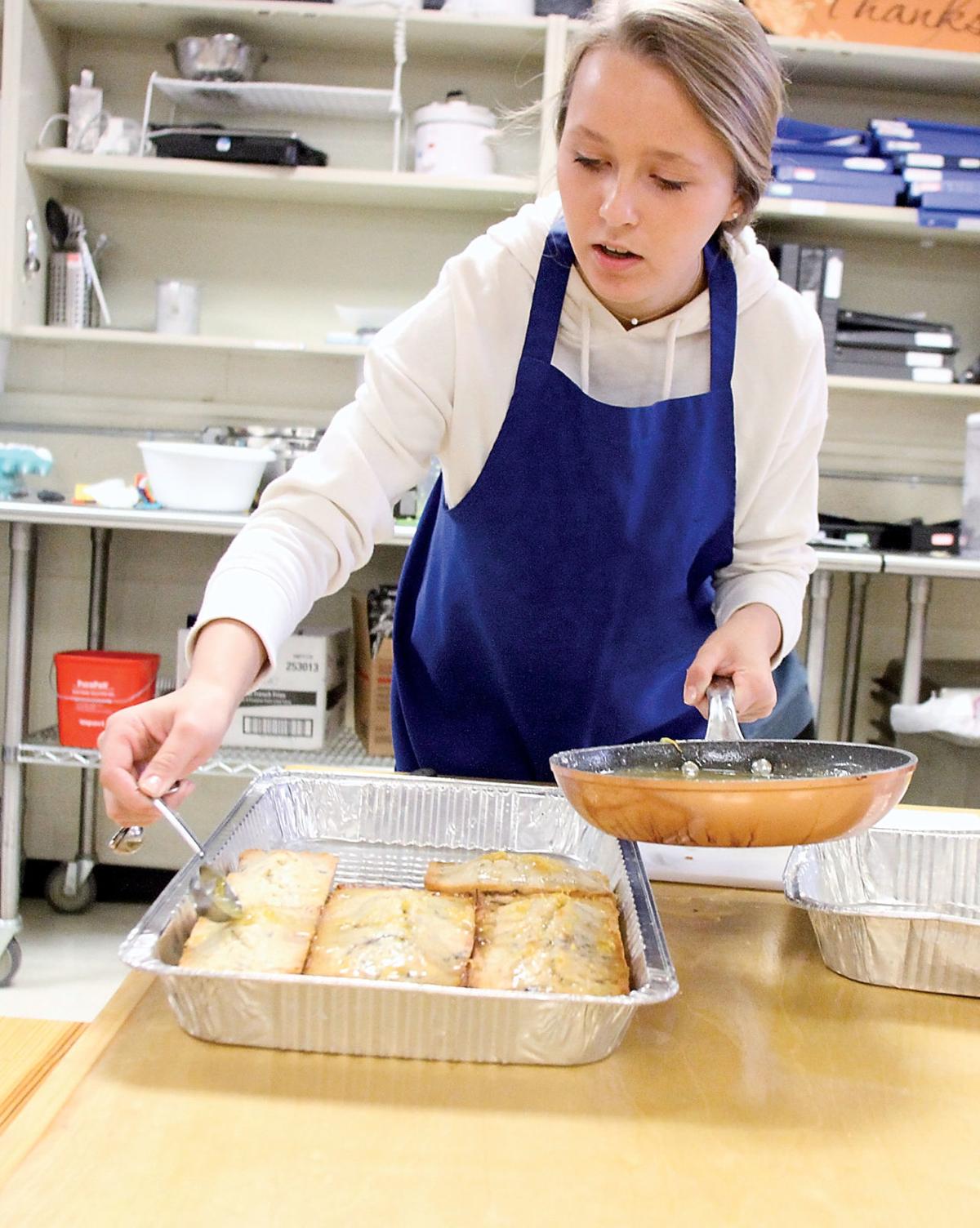 Estella Bookout applies lemon glaze to bread at the William Blount High School culinary class. The bread will be handed out to families at a local food pantry. 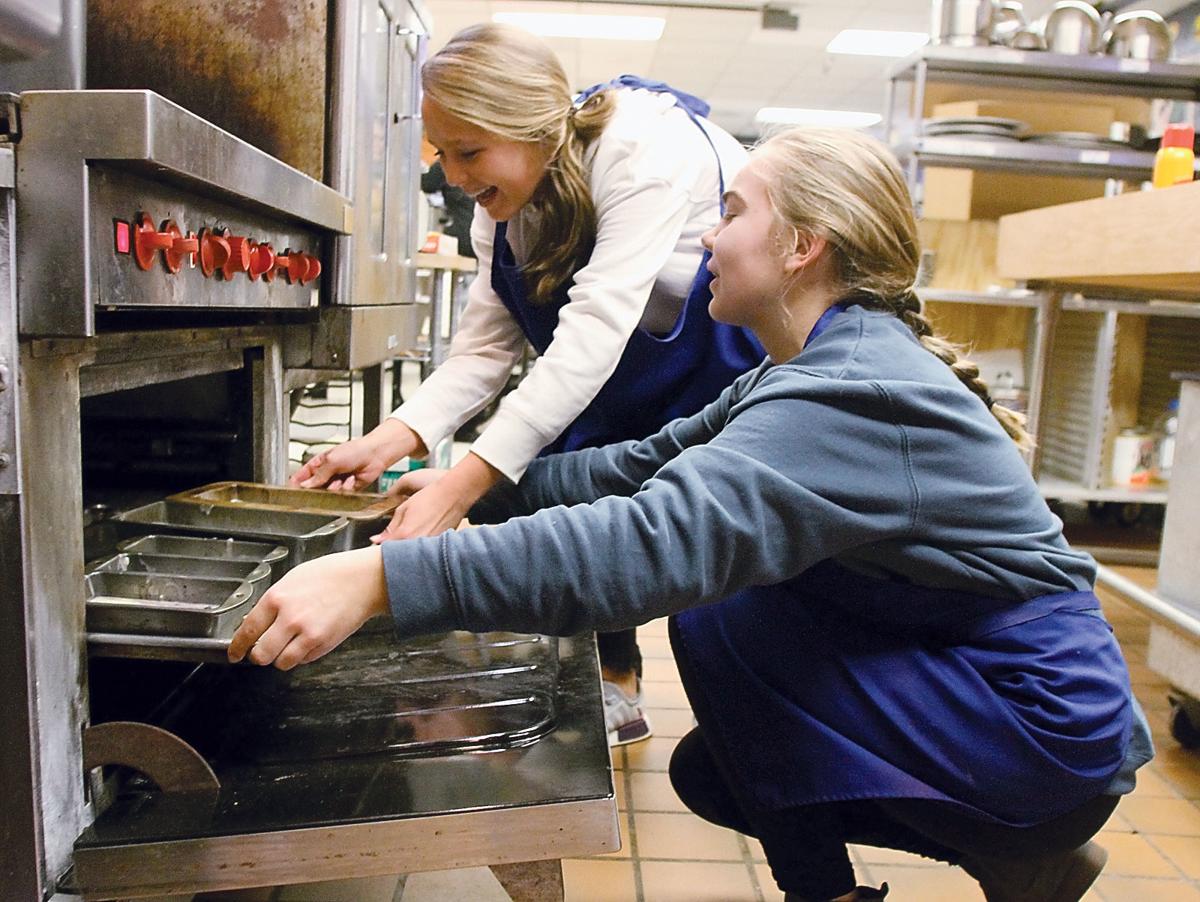 Estella Bookout (left) and Ava Webb put bread into the oven to cook at the William Blount High School culinary classroom. They showed up to help on Tuesday despite classes being called off in Blount County Schools. 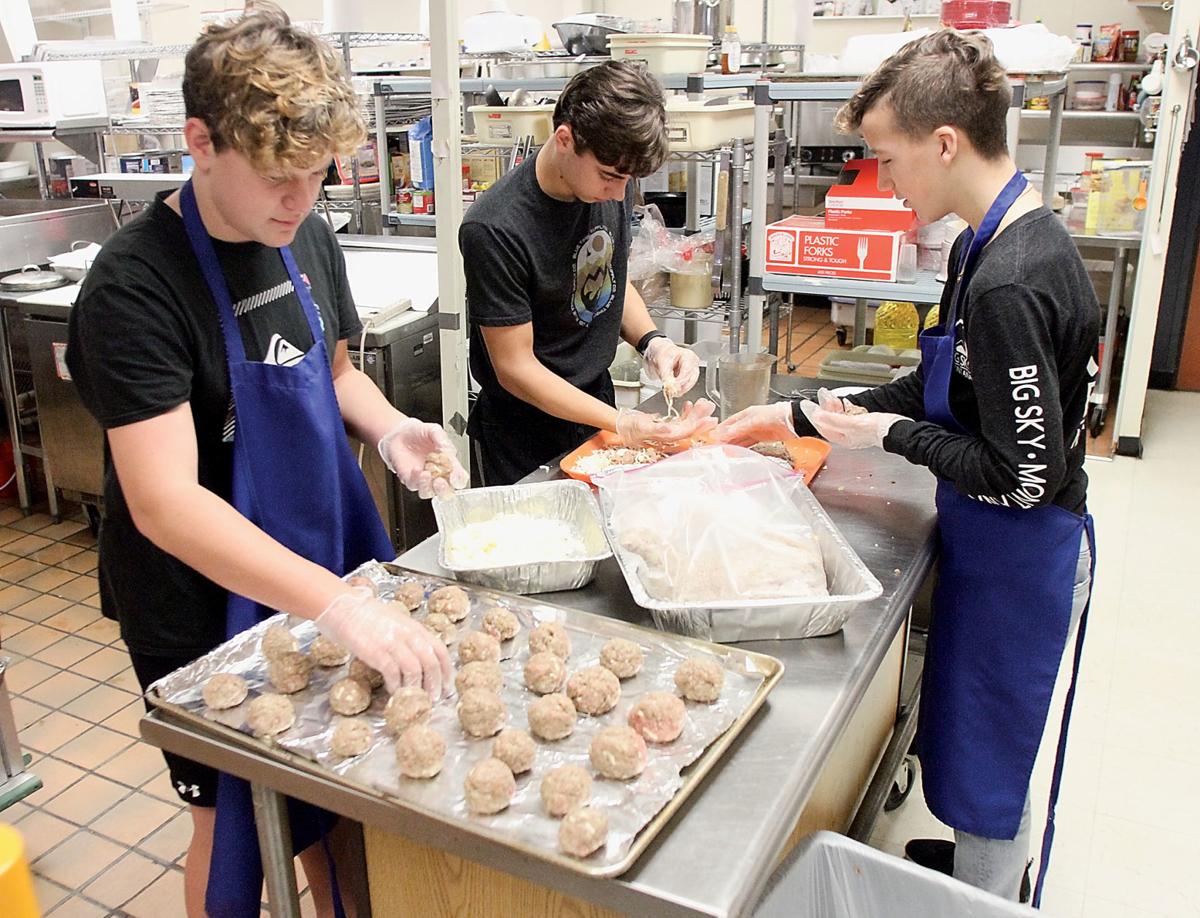 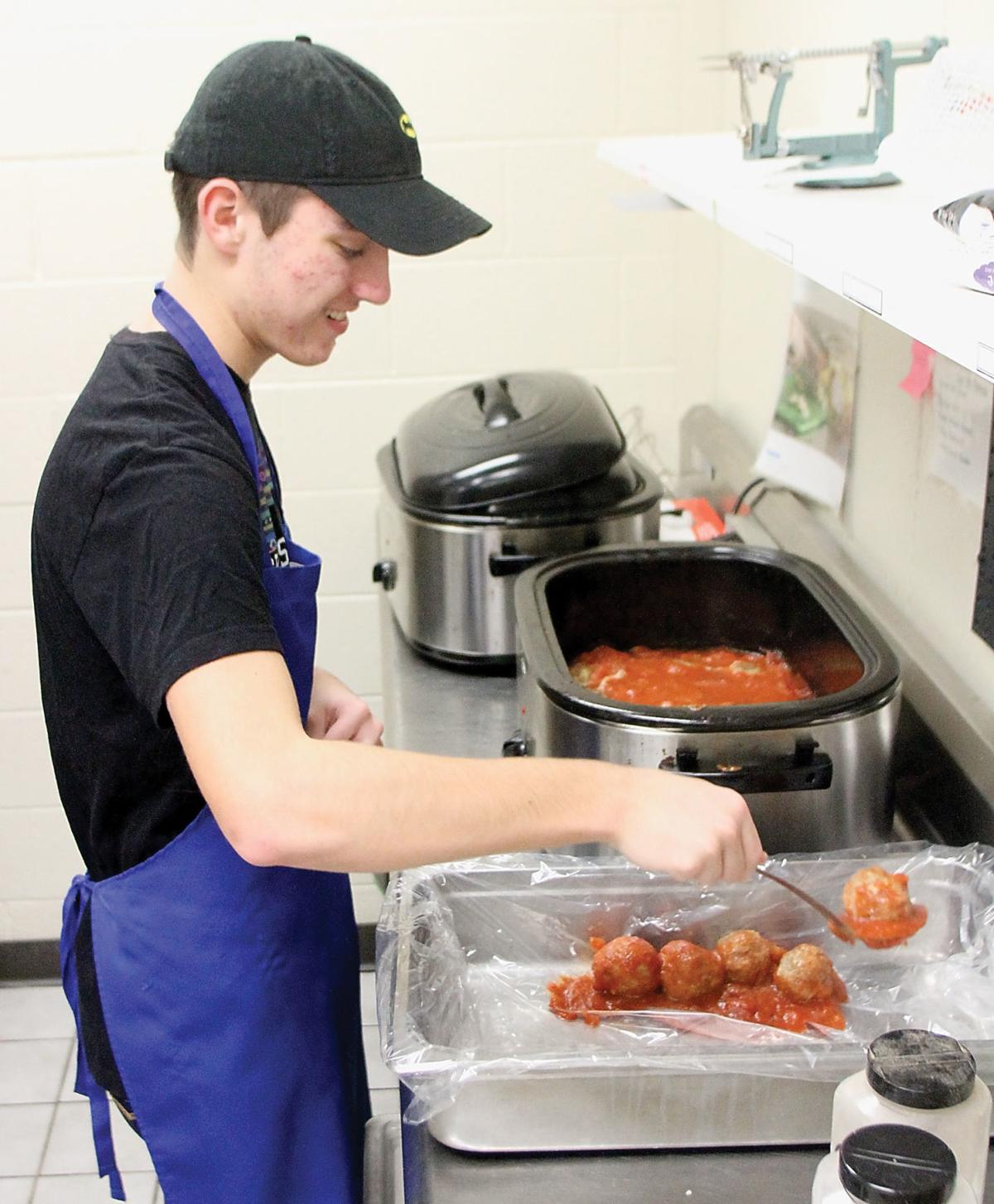 Atticus Coulter places meatball in a pan for delivery to Meals on Wheels at the William Blount High School culinary class. 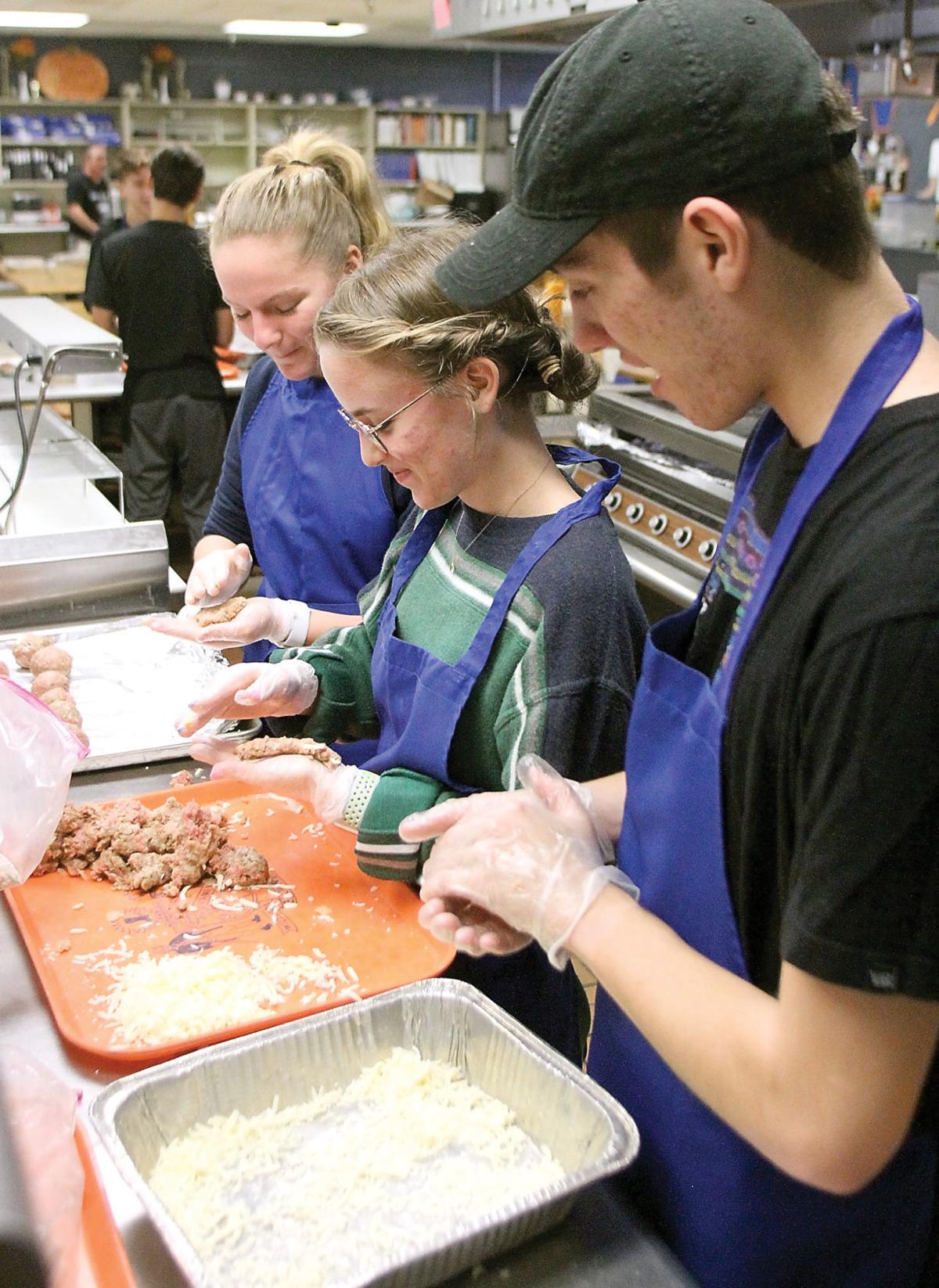 William Blount culinary students (from left) Carrie Coulter, Olivia Shipley and Atticus Coulter pat out meatballs to be provided to Meals on Wheels.

Estella Bookout applies lemon glaze to bread at the William Blount High School culinary class. The bread will be handed out to families at a local food pantry.

Estella Bookout (left) and Ava Webb put bread into the oven to cook at the William Blount High School culinary classroom. They showed up to help on Tuesday despite classes being called off in Blount County Schools.

Atticus Coulter places meatball in a pan for delivery to Meals on Wheels at the William Blount High School culinary class.

William Blount culinary students (from left) Carrie Coulter, Olivia Shipley and Atticus Coulter pat out meatballs to be provided to Meals on Wheels.

What do you do if it’s your birthday and you have the day off?

If you’re Marty Durand, you go to work and cook 14 chickens to feed members of your community.

Durand is the culinary arts teacher at William Blount High School. He and his students prepare hundreds of dinners for the Smoky Mountain Meals on Wheels program. But, students had been off since Feb. 6 due to flooding concerns. Durand said he got a delivery of whole chickens and also ground beef and pork last week. He put them in the refrigerator to thaw, expecting himself and his students to begin meal prep on Monday.

School was called off, Durand said, but the meal prep needed to move forward.

“What I did yesterday (Monday) was come in and cook all of the chicken,” he said. “And today, the students are here helping me make meatballs. Tomorrow more students will come in to make the chicken casserole.”

About eight students showed up Tuesday, despite there being no classes in session. Durand said when they heard he was there working mostly by himself on Monday, they called and gladly volunteered to come in and assist.

The pork and beef were turned into about 350 meatballs stuffed with Mozzarella cheese. The ingredients were provided by Meals on Wheels, which provides food deliveries to seniors who aren’t able to cook for themselves. The chicken Durand cooked was to be added to ingredients today to make chicken casserole, also for Smoky Mountain Meals on Wheels.

Over in another corner of the culinary arts kitchen, students were making 30 loaves of blueberry lemon zucchini bread. These loaves, Durand said, were being made for a church that has a weekly food pantry.

“They have 28 families who will be picking up groceries,” Durand said. “We wanted to provide those families with fresh loaves of bread.”

Each semester, 66 students can enroll in the culinary arts program at William Blount. In addition to learning food preparation through its partnership with Meals in Wheels, Durand and his culinary students operate the Gov Grill for students, faculty and visitors.

Opportunities are there to also host dinners for outside groups. For example, on Friday, which is Valentine’s Day, this culinary program will be cooking and serving a meal for 40 seniors onsite. This is the third year they have hosted the special occasion dinner, Durand said. They will be serving chicken breast stuffed with fresh Mozzarella over pasta, bread and a triple chocolate cake.

On Tuesday, most of the students who showed up aren’t even currently in Durand’s culinary arts program. Some were in it last semester; some are seventh and eighth graders who won’t be in his class for a couple of years.

The younger students have gotten to know Durand through other projects he has done in the community. This is his 21st year at WBHS and he also teaches tennis through Parks and Rec. Ava Webb, a seventh grader, takes tennis from Durand in the summer, as does Estella Bookout. Both were here on Tuesday, baking bread and helping with the Meals on Wheels dinners.

Webb said she first got introduced to the culinary arts when she helped Durand make Christmas cakes when she was in fifth grade. She said she loves to cook, including for her own family.

Junior Braden Arritt was busy Tuesday shaping meatballs. He said he probably won’t go into culinary arts as a profession, but the skills will prove valuable throughout his life.

Besides learning to cook his favorite – hand-tossed pizzas — Arritt said he has also learned organizational skills, too.

For Bookout, her favorite meal to prepare is cajun chicken pasta. She will enter the culinary program next year as a sophomore.

While Meals on Wheels provides the ingredients for the meals Durand and his students prepare for them, this teacher said he believes in wasting as little as possible. He gets produce from grocery stores that are almost past their shelf life, like lemons. He is then able to make a great lemon glaze for the zucchini bread and the “best lemonade you ever tasted.”

Most everything they do is from scratch, not a box or can. Durand also teaches food safety and composting to reduce waste.

These teens also learn a valuable life lesson on helping others, this teacher said. When the meals for Meals on Wheels are delivered to seniors, their meal comes with a sticker that says it was prepared by these culinary students.

“These meals should be the best we can do,” Durand said. “The seniors deserve food that is healthy and tastes good.”

At the end of the day today, all of the prep work should be completed. The Meals on Wheels food will be taken out to homes on Friday. Nothing had to be thrown out because school was out.

Three hundred people will get two meals delivered on Friday,” he said. “That is a gift from these kids.”