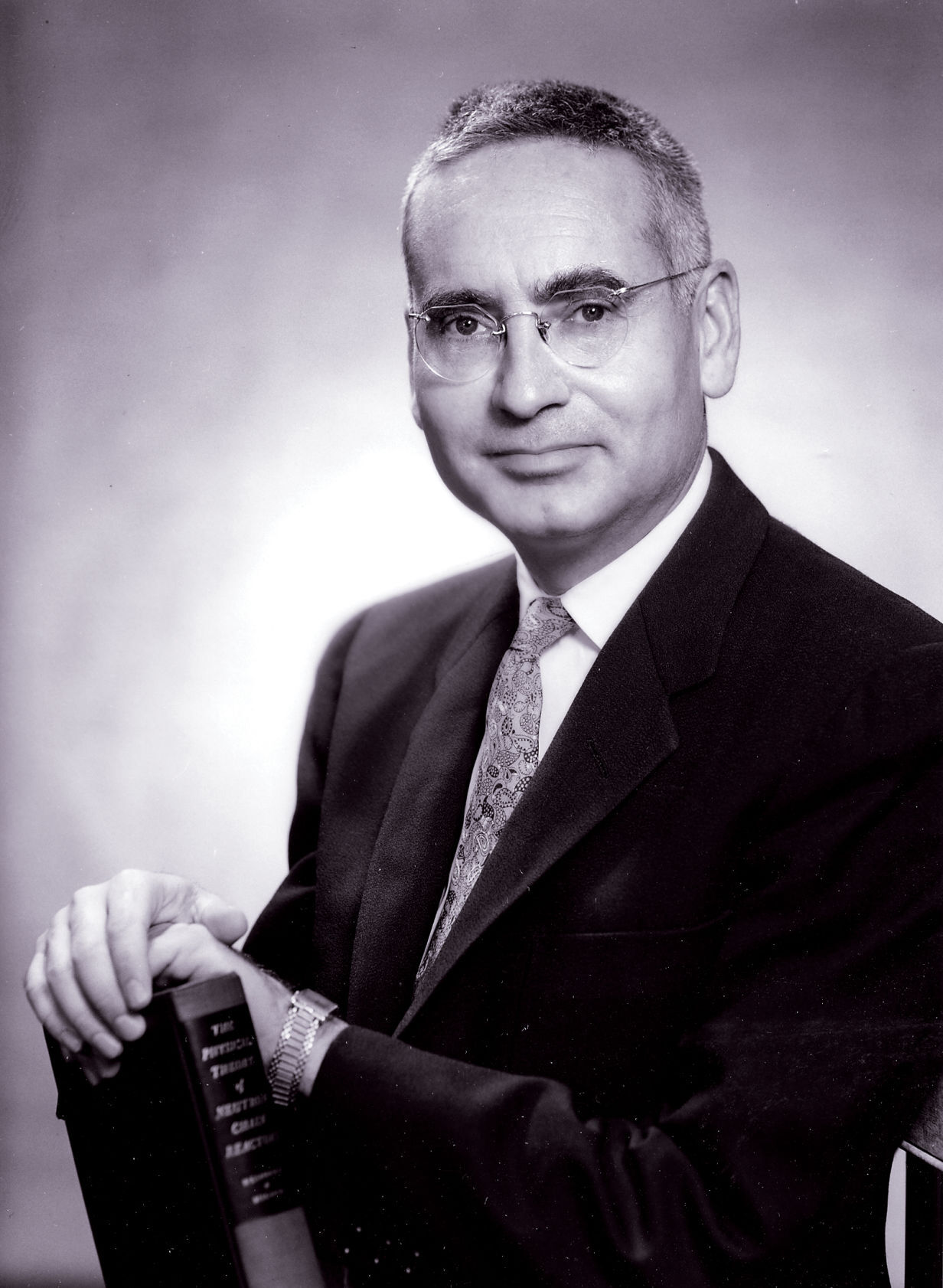 Alvin Weinberg succeeded Eugene Wigner as director for research and development at Oak Ridge National Laboratory in 1949, when this photo was taken. 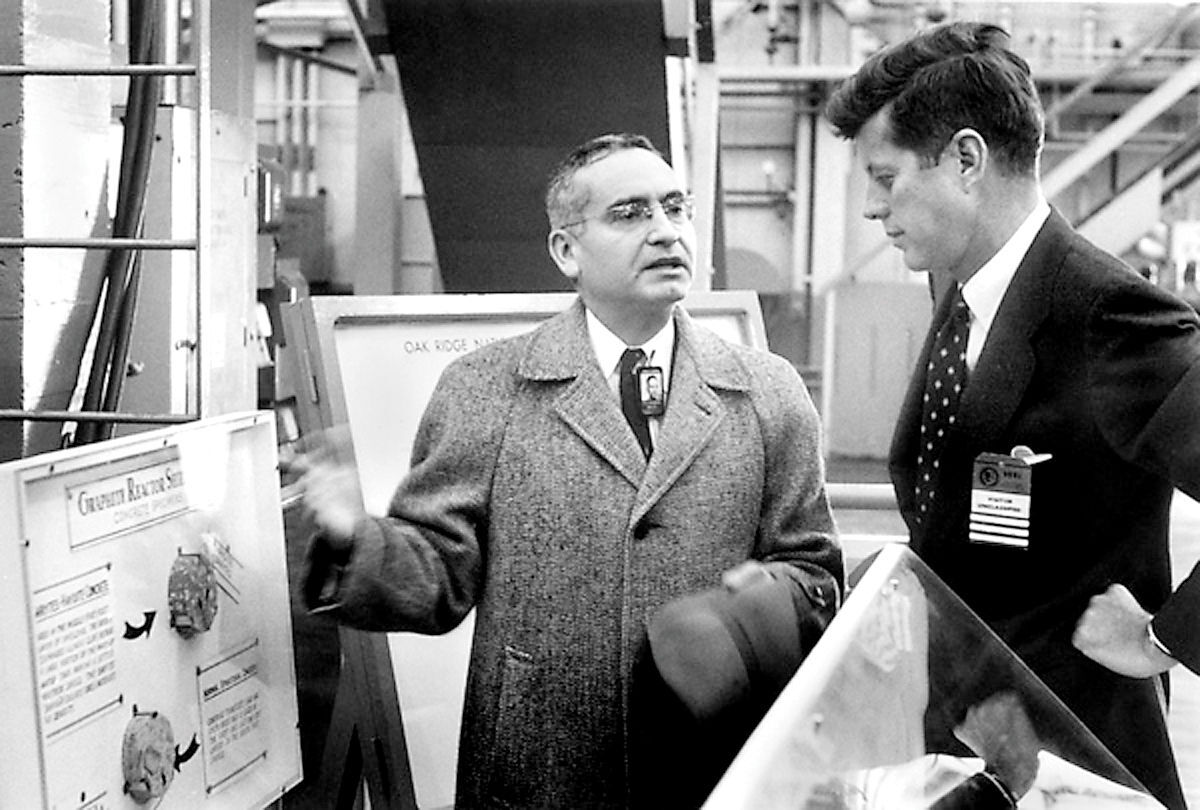 Alvin Weinberg succeeded Eugene Wigner as director for research and development at Oak Ridge National Laboratory in 1949, when this photo was taken.

A collection of papers that Alvin Weinberg gave to the Children’s Museum of Oak Ridge 35 years ago is now preserved in an online archive, giving researchers, educators and the public access to almost 50 years of personal and scientific documents of the famed Manhattan Project physicist who devoted many years to developing peaceful uses for nuclear energy.

Weinberg chose the local Children’s Museum, focused on Oak Ridge history, science, and the arts, as a unique location for the archive.

“Archives are usually maintained by long-lived organizations, typically local, regional and national governments, libraries, universities and large companies,” said Sean Johnston, Emeritus Professor of Science, Technology and Society in the College of Social Science at the University of Glasgow. He traveled from Scotland to Oak Ridge in 2016 to research Weinberg’s paper files at the Children’s Museum and at the University of Tennessee as part of a project funded by the British Academy.

“Online access is certainly the trend in archives now and makes access thorough and much less expensive,” said Johnston, who used his Weinberg research findings in conference presentations, academic papers and books, and in teaching graduate student classes. “Archives…generally try to give an unbiased, unfiltered view of primary documents of an organization, individual , or time period — the Weinberg collection is a bit of all of these.”

The link to the Alvin Weinberg Archive Collection is: https://bit.ly/

Weinberg’s friendship with Selma Shapiro, previous longtime director of the Children’s Museum, and his appreciation’s of the Museum’s focus on Manhattan Project and Oak Ridge history, influenced his decision to place his papers there, according to Beth Shea, Children’s Museum Executive Director.

“The Children’s Museum is incorporating the legacy of Alvin Weinberg into its commitment to STEAM education and to preserving the history of Oak Ridge from the perspective of the humanities, science and the arts. Weinberg’s work is highly relevant to today’s challenges,” Shea said.

Weinberg, who died in 2006 at the age of 91, was director of the Oak Ridge National Laboratory (ORNL) from 1955-1973. He first worked with his mentor and friend Eugene Wigner, winner of the Nobel Prize in Physics, in the early 1940s at the University of Chicago, with a team that created the first nuclear chain reaction. Those experiments led to the development of the first atomic bomb during the Manhattan Project, in which Oak Ridge had a key role, in World War II.

Weinberg arrived in Oak Ridge in 1945, directing the physics division and then becoming ORNL research director in 1948. He gained international recognition for contributions to nuclear reactor technology and to “Big Science,” a term he used for science designed to solve large problems. He also coined the term Johnston researched, “technological fix,” using technology to solve human problems.

Weinberg later founded the Institute for Energy Analysis, a think tank on climate and energy at Oak Ridge Associated Universities. He wrote eight books and more than 500 scientific papers, and he served on three presidential science advisory committees. He was committed to presenting scientific information clearly to both technical and non-scientific audiences, publishing in journals of broad interest beyond nuclear physics.

In 1986, Weinberg entrusted his 17 file cabinets of papers to Shapiro. In 2016, Shea, an experienced museum professional, was hired by the Children’s Museum and soon was determined to digitize the collection. She asked Ronnie Bogard, Shapiro’s daughter, to lead the project. Bogard gathered a volunteer team to plan the digitization of Weinberg’s papers, continuing her mother’s care for the collection and resulting in the online archive.

Bogard and the team raised $93,000 from individual and corporate donors for the project. She plans to raise $9,000 more to digitize the last few boxes of papers, slides and photos. Donations may be made to the project on the Children’s Museum website (http://bit.ly/weinbergdonations) or by check to the nonprofit Children’s Museum, with “Weinberg Project” in the memo line.

Among those helping were Becky Briggs Becker, Archives Assistant at University of Tennessee Libraries, and Alesha Shumar, Assistant Head UT Archivist, who created a plan for curating and moving the collection from filing cabinets to archival boxes. They helped in recruiting two graduates of the UT Library Science master’s program hired to work on the project.

Becker described the collection as huge, estimated at 210 linear feet and stored in 126 archival boxes of papers, plus more photographs and supporting materials.

“In terms of the collection itself, it is significant because it documents nearly the entire career of a famous Manhattan Project physicist,” Becker said. The archive may eventually be linked to Weinberg’s post-1989 papers archived at UT’s Baker Center for Public Policy, she said.

Besides “search” and “advanced search” options, the online archive includes search options for:

• Featured Collections, listing smaller files that have been frequently requested, including “International Science Prospects,” “Nuclear and World Peace,” “Nuclear Powered Aircraft,” “Physics for Engineers,” “Science and Government,” and many letters.

• Finding Aid, a listing of every file in the collection with descriptors.

Bogard hopes educators will seek out Weinberg’s ideas on science education and look at the way he expressed himself to other scientists in memos, letters and speeches. Becker believes researchers studying World War II history and the Manhattan Project will find the archive valuable, as well as those studying the postwar use of nuclear energy and postwar Oak Ridge history. Johnston said the archive will be of interest to historians focused on the late 20th century and American institutional history.