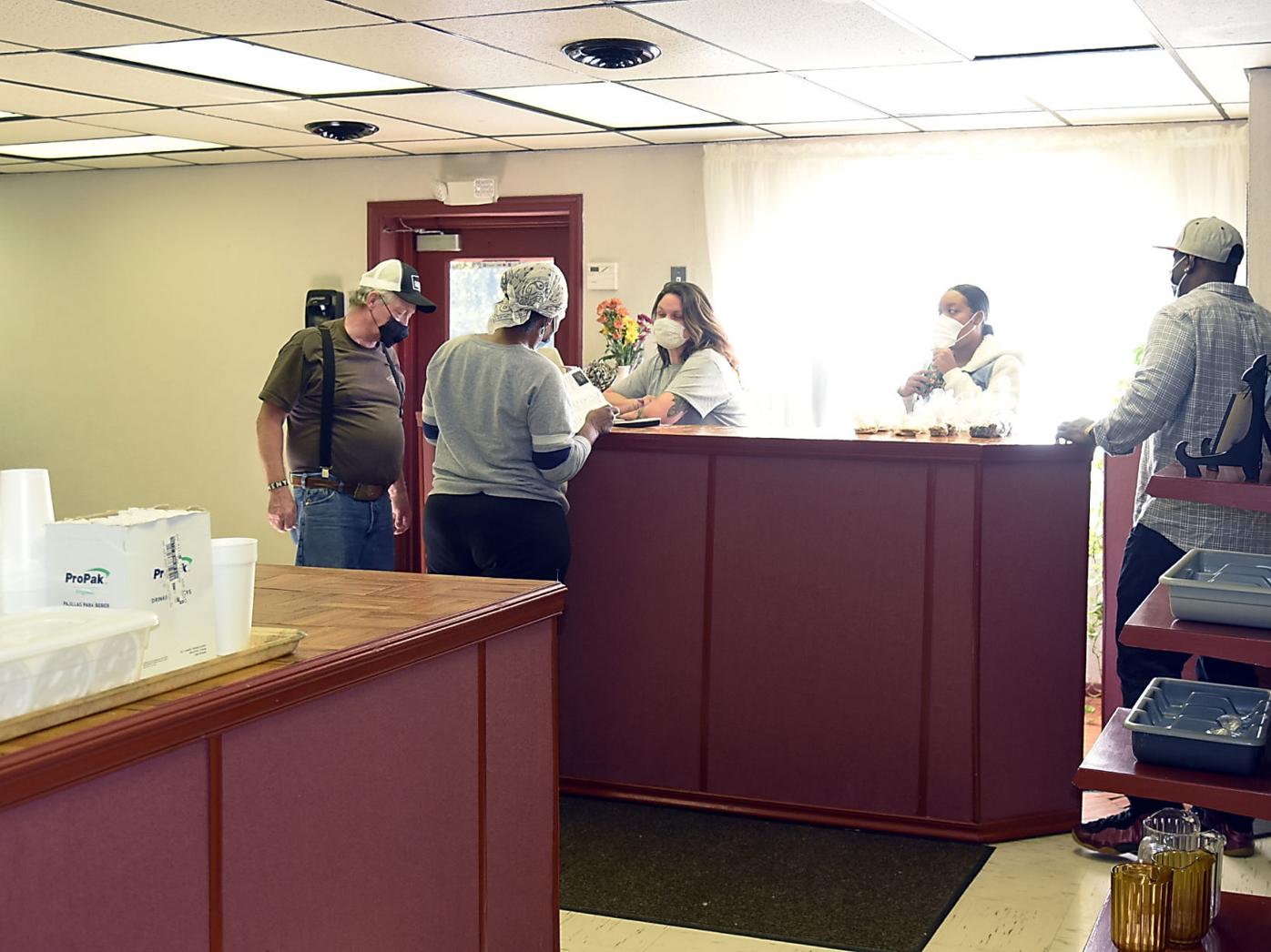 Customers are welcomed by staff to Shaun and Sherrie’s Soul Food which has recently opened at 3318 Grade Road in Rockford. Shaunetta Lowery and her brother, Mark Avery, have gone into business together. Their mom, Sherrie Avery is also part of this family restaurant. 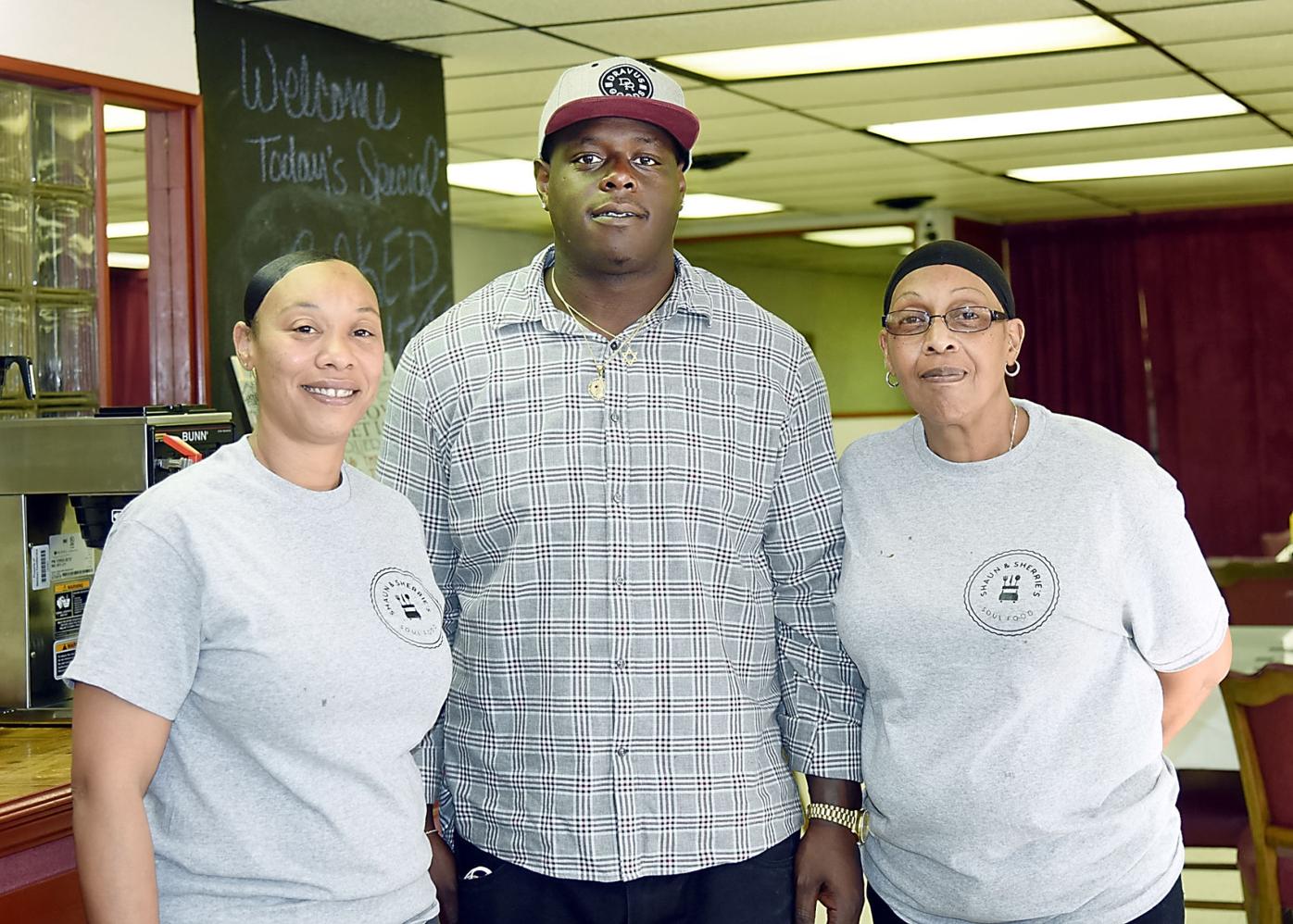 (From left) Shaunetta Lowery, her brother, Mark Avery and their mother, Sherrie Avery. They are now serving customers at Shaun and Sherrie’s Soul Food, 3318 Grade Road in Rockford. 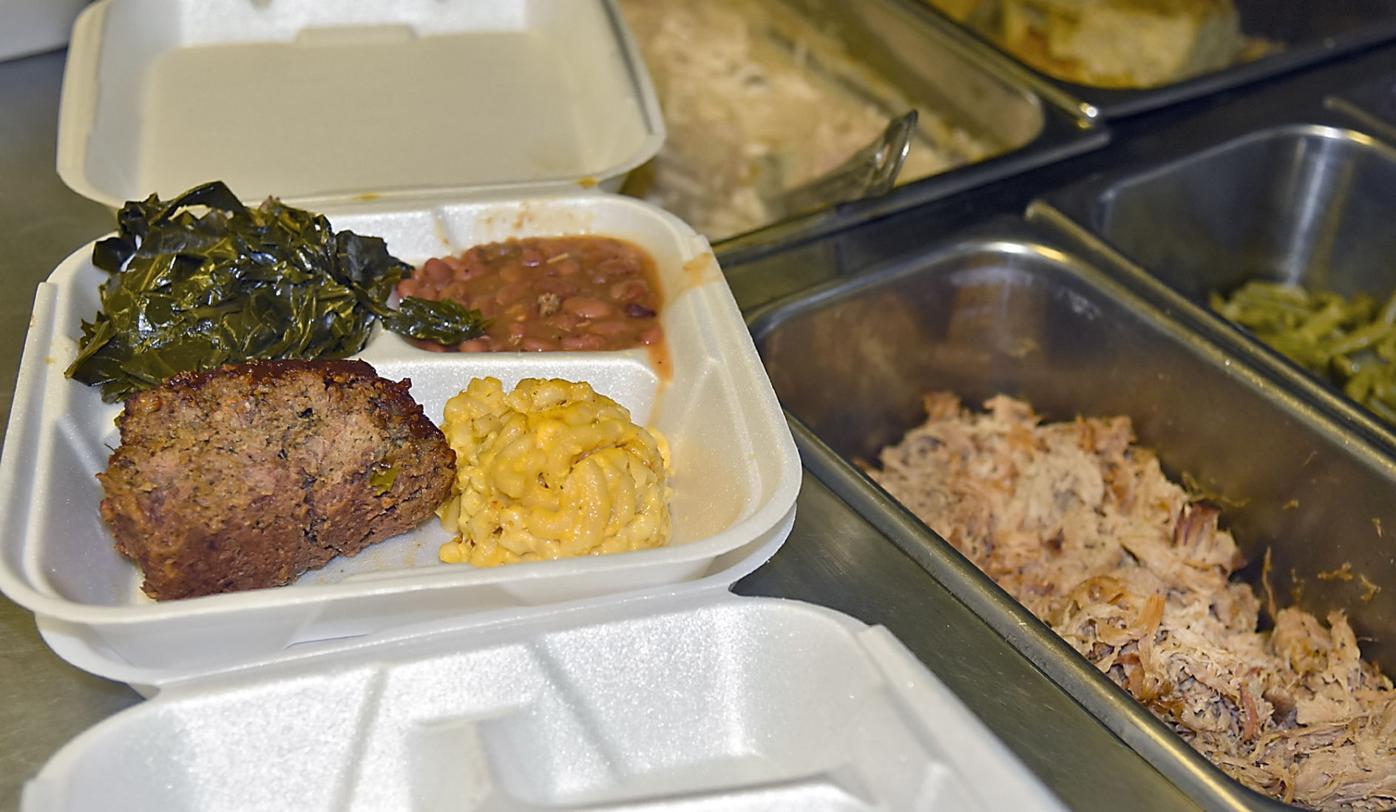 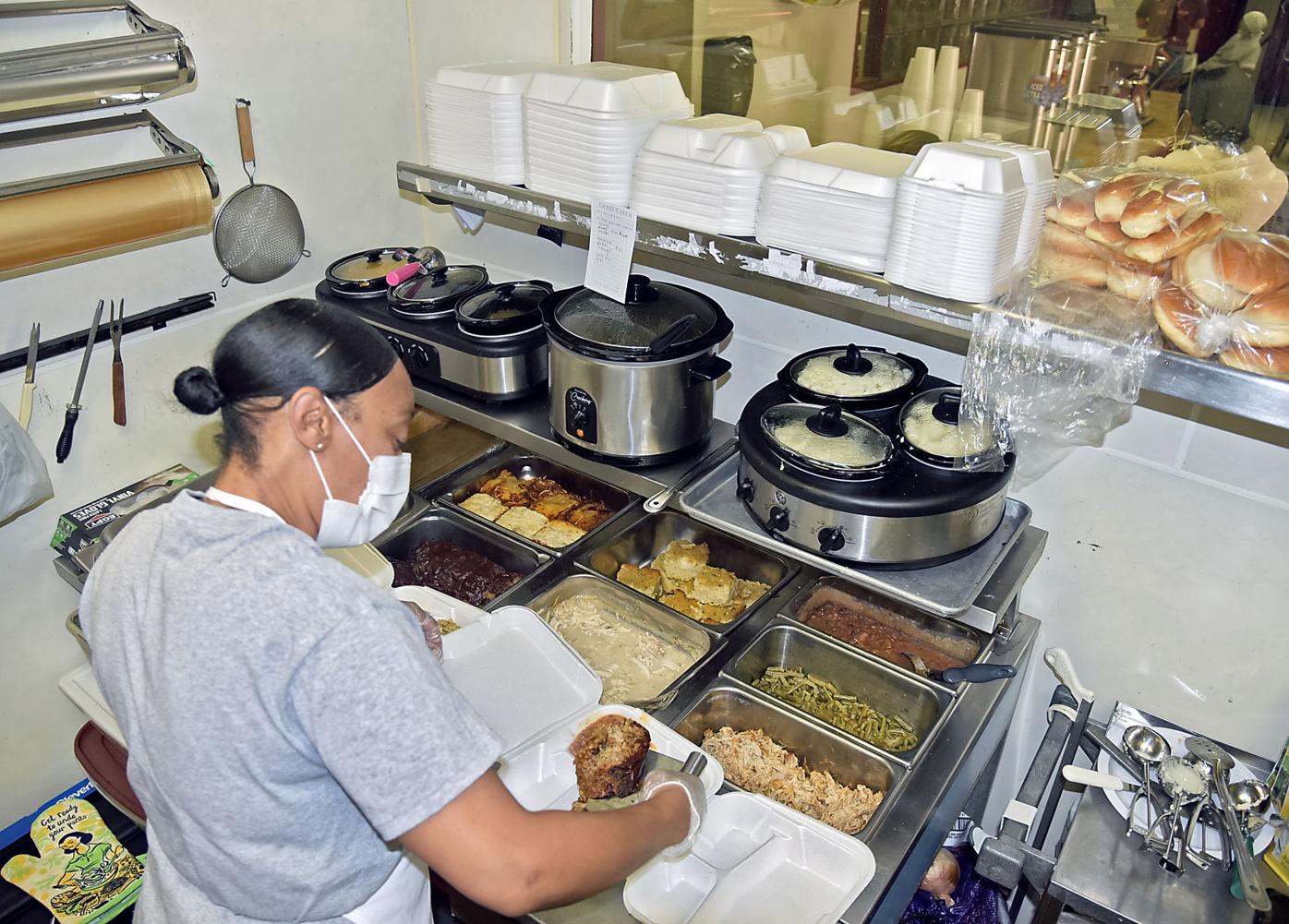 Shaunetta Lowery of Shaun and Sherrie’s Soul Food loads a plate with meatloaf and sides. 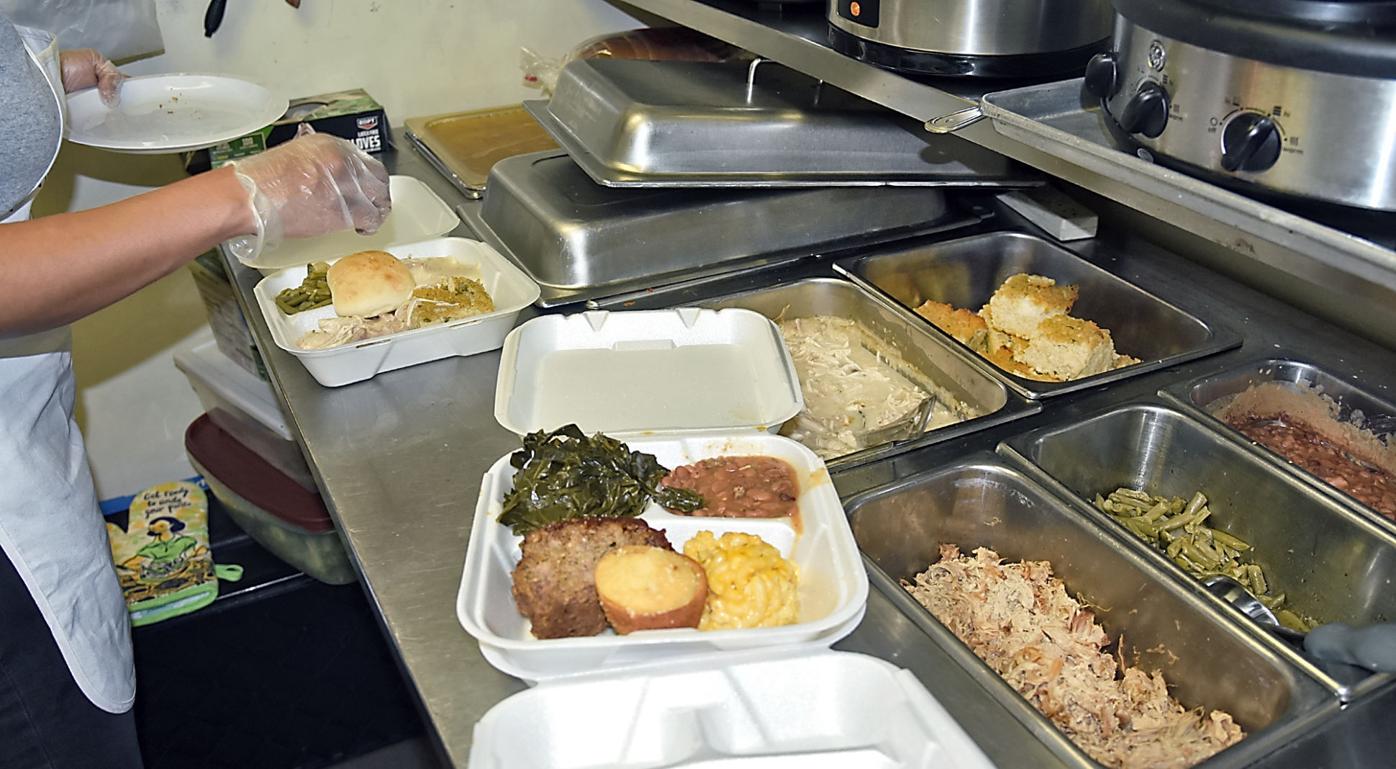 A selection of Shaun and Sherrie’s Soul Food dishes are prepared for service Friday during lunch at 3318 Grade Road in Rockford.

Customers are welcomed by staff to Shaun and Sherrie’s Soul Food which has recently opened at 3318 Grade Road in Rockford. Shaunetta Lowery and her brother, Mark Avery, have gone into business together. Their mom, Sherrie Avery is also part of this family restaurant.

(From left) Shaunetta Lowery, her brother, Mark Avery and their mother, Sherrie Avery. They are now serving customers at Shaun and Sherrie’s Soul Food, 3318 Grade Road in Rockford.

Shaunetta Lowery of Shaun and Sherrie’s Soul Food loads a plate with meatloaf and sides.

A selection of Shaun and Sherrie’s Soul Food dishes are prepared for service Friday during lunch at 3318 Grade Road in Rockford.

Cooking has been a passion for Shaunetta Lowery for most of her life, so when she got the chance to open her own restaurant in Blount County, she grabbed it.

This Alcoa resident put her faith in her abilities, quit her job at Blackberry Farm and went into business for herself, brining along her brother, Mark Avery, and her mom, Sherrie Avery. And because Lowery has been cooking up comfort food for family and friends, that part of the equation has been relatively easy.

This daughter/mother combination can be found in the kitchen Tuesday through Sunday. They have put some of their favorites on the menu at Shaun and Sherrie’s Soul Food, located on Grade Road in Rockford. That means meatloaf, pork chops, wings and turkey and dressing, along with collard greens, macaroni and cheese, mashed potatoes, pinto beans, slaw, cornbread and plenty more. Each day of the week there is a special; on a recent Friday it was baked spaghetti.

Lowery said the idea of becoming the owner of her own restaurant was planted years ago when she was cooking dinners as fundraisers for her daughter, who was a debutante.

“It went really well,” she said. “I always cook for our family dinners, like Christmas. I cook dinner every day.”

Mark Lowery came across the empty building that is now Shaun and Sherrie’s Soul Food. He was in conversation with the building’s owner, who had previously operated a restaurant there. It was called Townsend’s Restaurant and served up his famous pigburgers.

Owner John Townsend asked Avery if he knew anyone who might be interested in staring up their own restaurant. Townsend closed his restaurant a few years ago.

“I just said, ‘nobody off hand,’” Avery recalled. Then he called his sister and asked her about taking this giant leap.

Lowery came to look over the property and agreed it was what she had been wanting. Shaun and Sherrie’s Soul Food opened less than two weeks ago.

It was a giant leap, Lowery said, because of the pandemic. Many establishments with long histories have closed their doors in the last nine months. But, this excited chef didn’t have time to worry over what might happen. She got to work. And asked her mom to come alongside to do some of the cooking with her.

Sherrie, who started in food service when Shaunetta was in first grade, said she also had to quit her other job to come onboard. Like her daughter, Sherrie said she has always loved to care for others by feeding them. She added this partnership is a special one, as she gets to work with her daughter and son.

The restaurant is open Tuesday through Sunday. There are two separate menus, for lunch and dinner. Hamburgers and wings, along with chicken tenders, pulled pork are a few of the lunch items. Fries and coleslaw along with sweet tea or soft drink options make the meals just what a hungry stomach wants.

For Lowery, the collard greens are her favorite menu item, to eat and also cook. She gets lots of compliments on them, she said. Her meatloaf, which uses a mixture of peppers, onions, garlic, ketchup, eggs, breadcrumbs and meat, can change,

depending on her mood. Some Worcestershire sauce or even a dollop of cream of mushroom soup makes it into the recipe.

Mark owns his own landscaping business and also helps out at Shaun and Sherrie’s Soul Food. He said the burgers are excellent. He said he is so glad they decided to grab this opportunity, even if some restaurants are struggling right now. Business is slow at first as people hear about them, he said. But they remain optimistic a great menu will bring in the crowds.

“It is a lot of work,” Lowery said. “I am used to that. I’ve been in food service for a very long time.”

One of her employees is Erika Harris, who said her family eats here quite often. She said one of her sons loves the hot dogs and fries. Another is crazy about the coleslaw.

“And my mom said the meatloaf is the best she’s every had,” Harris said.

Lowery said she never grows tired of cooking, and her family has appreciated that over the years. “There is always something to eat when they come to my house,” she said.

Now they and everybody else have Shaun and Sherrie’s to try. Lowery said she is ready and eager to serve diners at her Rockford restaurant. Whatever you call it, soul food or comfort food, Sherrie said it might be just what we all need right now.