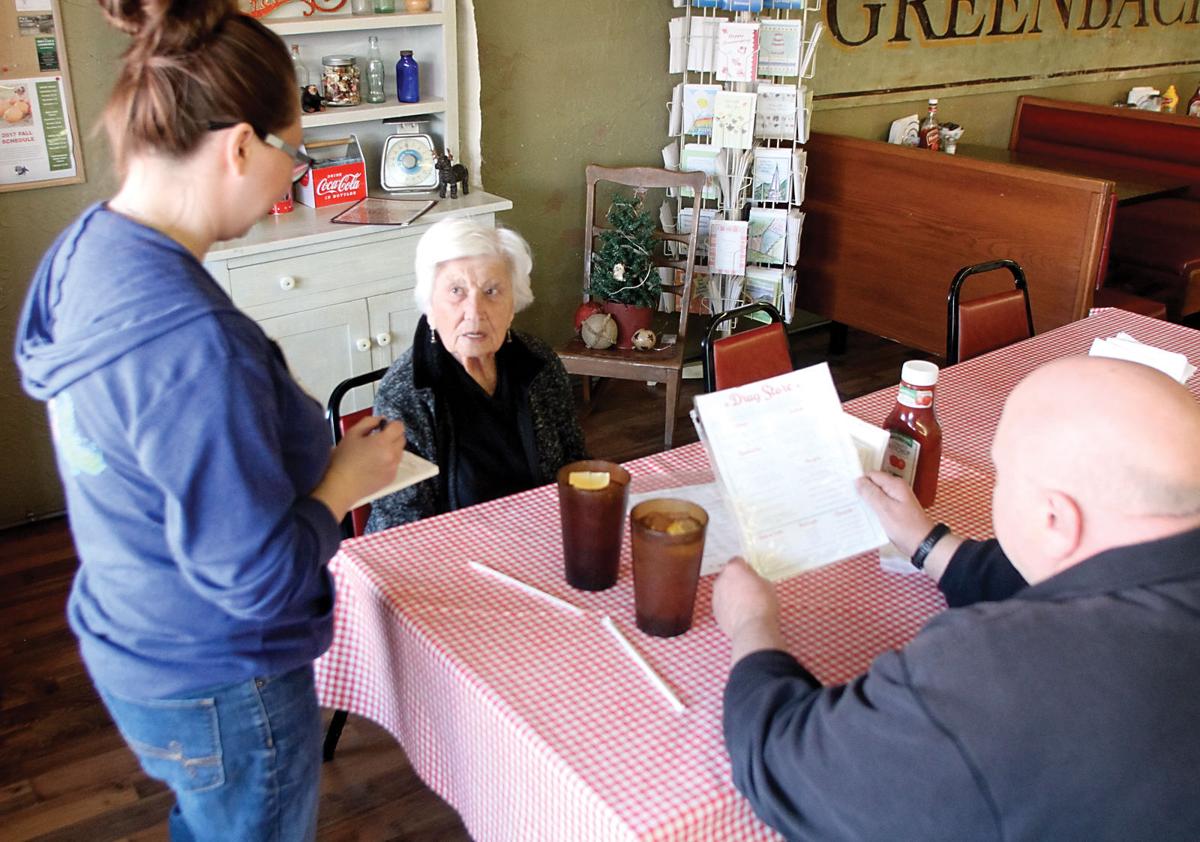 Cassie Tucker takes the food order from Jeff Tipton and Oveada Tipton at the Greenback Diner, which is under new ownership. 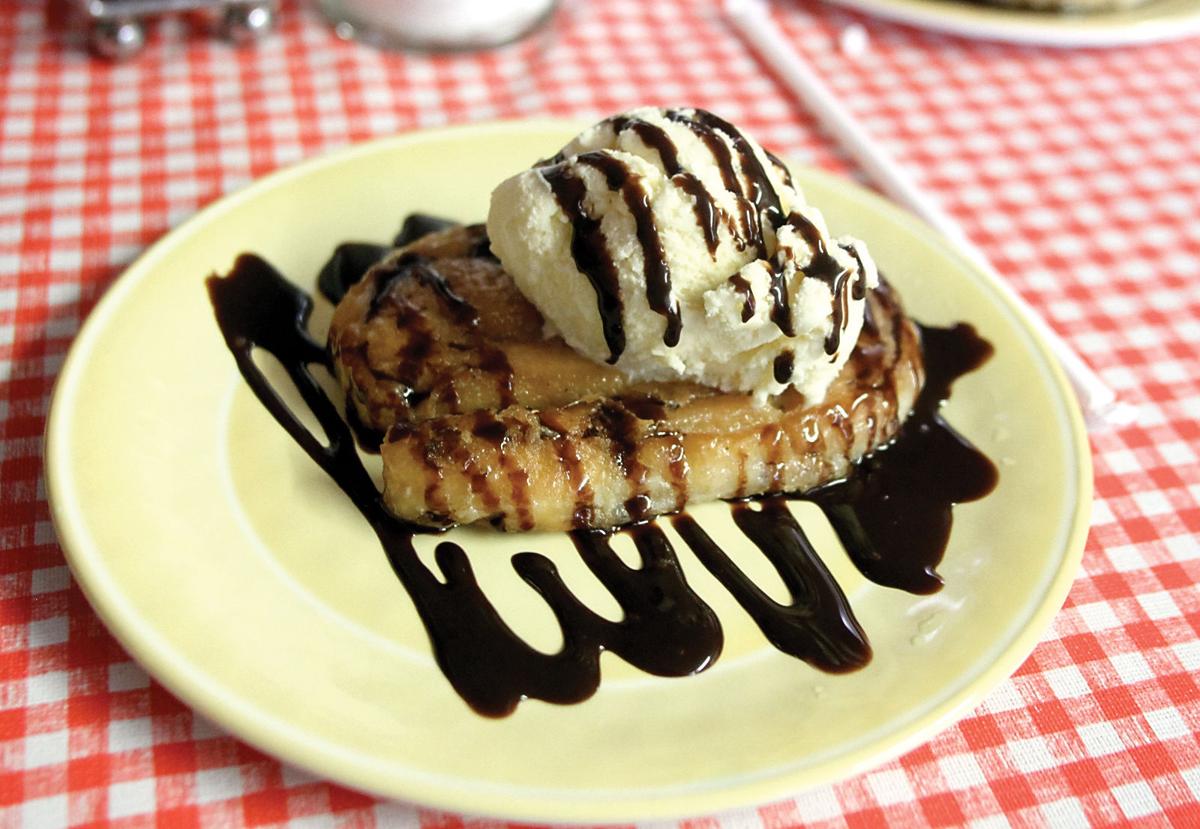 One of the Greenback Diner’s favorite desserts is the fried honeybun with ice cream. 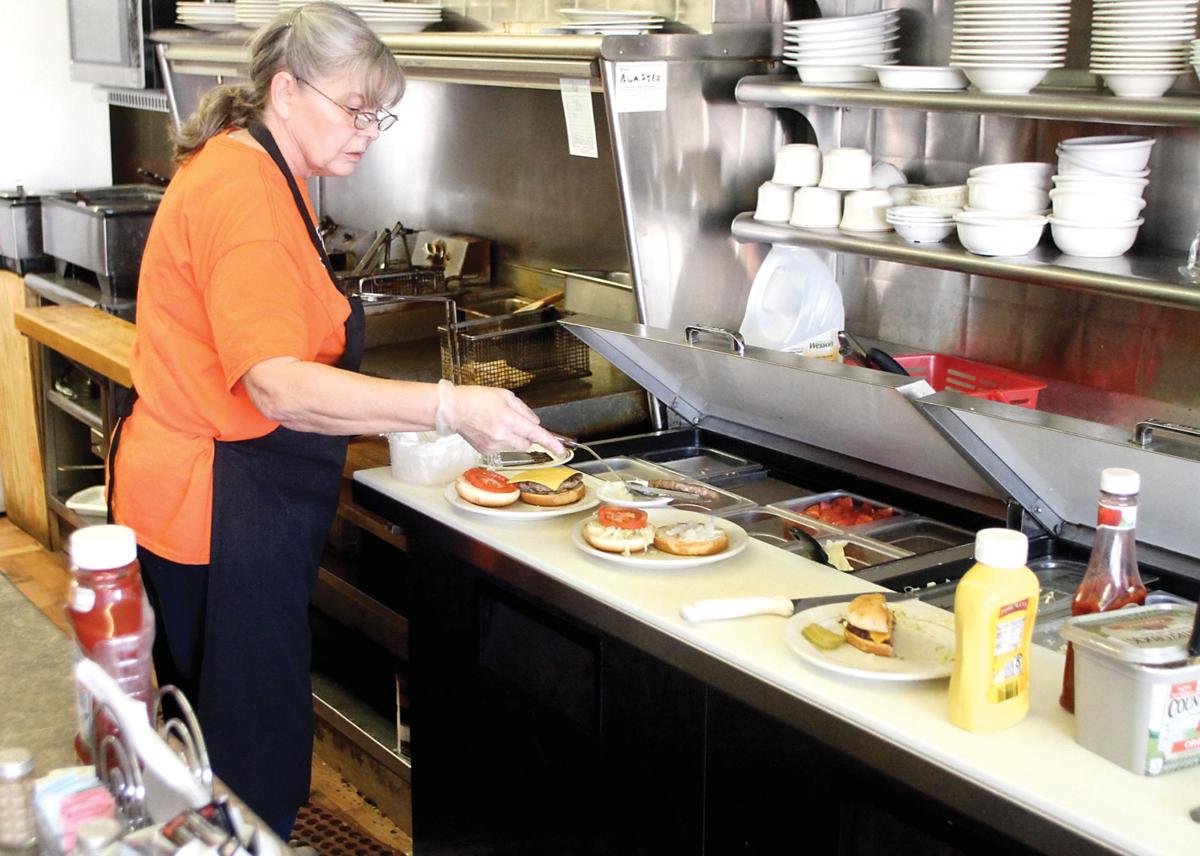 Miranda Russell prepares burgers for customers at the Greenback Diner. 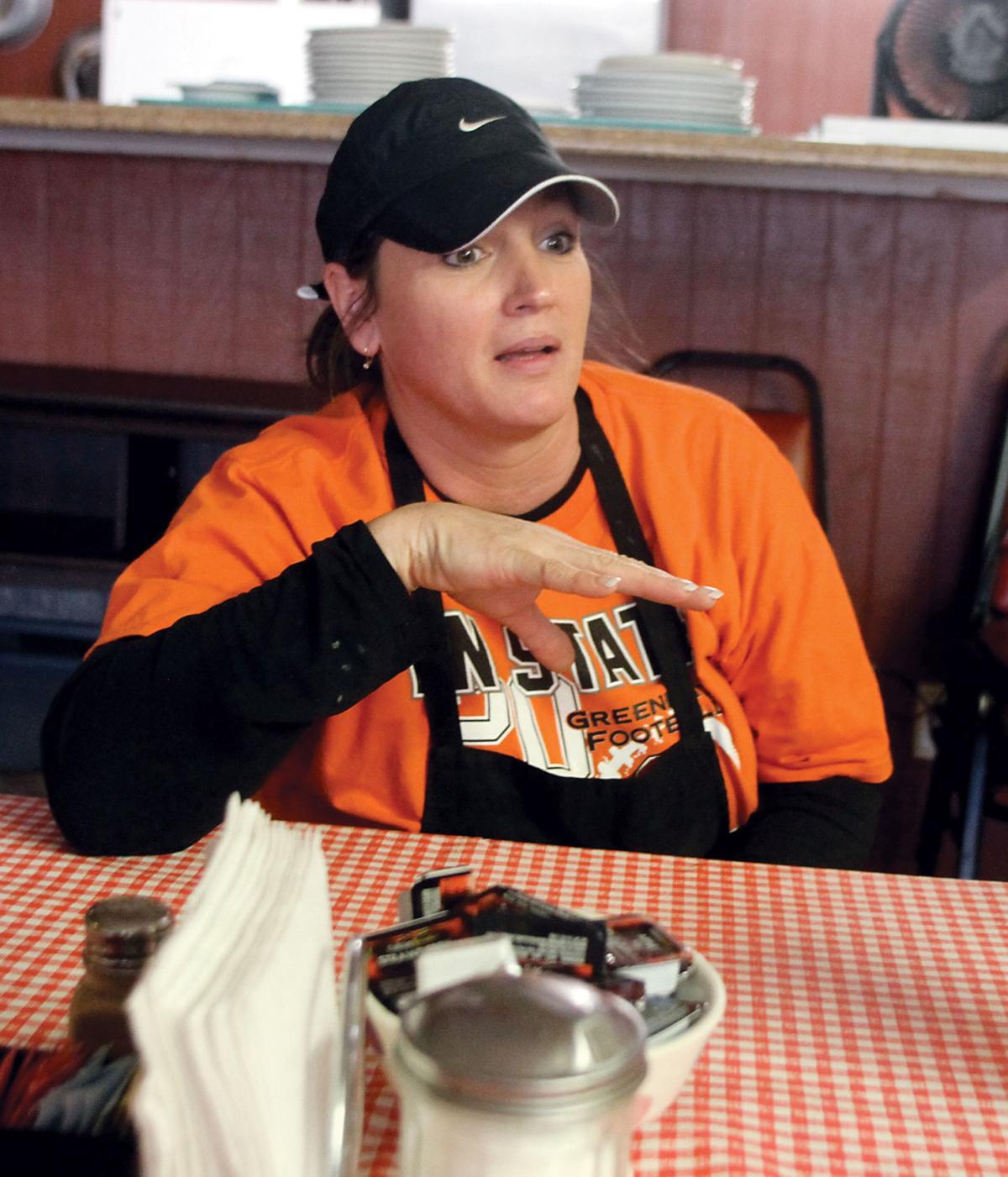 Greenback Diner’s new owner, Tammy Tallent, talks about her first month in business. She has customers who come here daily. 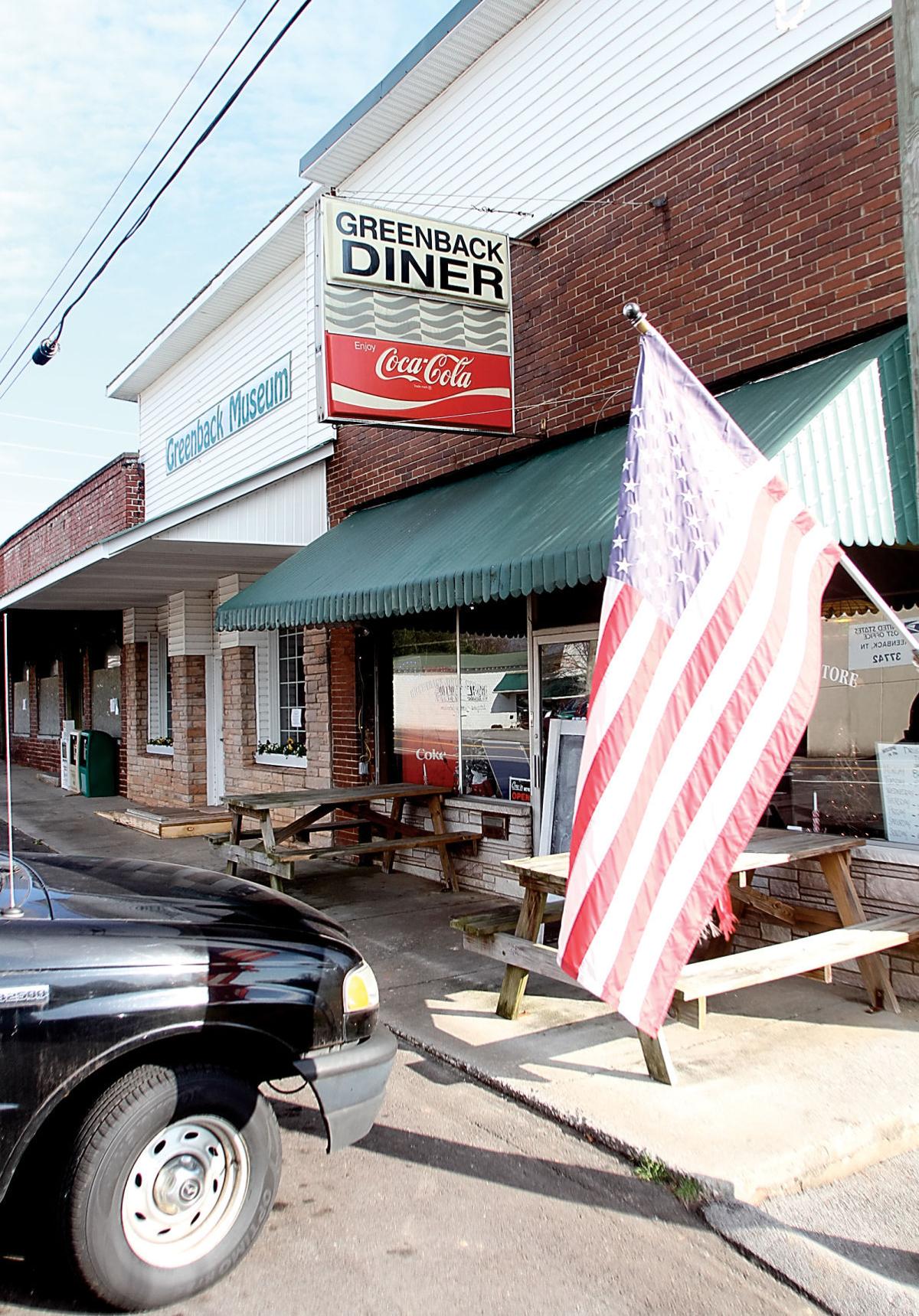 The Greenback Diner is under new ownership. Tammy Tallent purchased it less than two months ago.

Cassie Tucker takes the food order from Jeff Tipton and Oveada Tipton at the Greenback Diner, which is under new ownership.

One of the Greenback Diner’s favorite desserts is the fried honeybun with ice cream.

Miranda Russell prepares burgers for customers at the Greenback Diner.

Greenback Diner’s new owner, Tammy Tallent, talks about her first month in business. She has customers who come here daily.

The Greenback Diner is under new ownership. Tammy Tallent purchased it less than two months ago.

Omelets any way you like them for breakfast and country fried steak and gravy for lunch — at Greenback Drugstore Diner favorites like these are always on the menu, served up with some Southern hospitality.

The diner, located in the heart of Greenback and across from the U.S. post office on Morganton Road, has been in business since 1923. It’s had its share of owners. Less than two months ago, Tammy Tallent and husband Major Tallent became the newest. They bought the business from Angela Rigsby, who ran it for nine years.

Tammy Tallent is new to the restaurant business but not to Greenback Diner. She’s eaten in this Loudon County icon countless times. Her son, Brock Moore, graduated from Greenback School and spent lots of time devouring hamburgers from the grill. He was one of the first to tell his mom to buy the place.

“That was when the sign first went up that the diner was for sale,” Tallent said. A friend soon called and then another, telling her the same thing. “You should buy the diner.”

Customers grace the doors as soon as they open at 8 a.m. They remain open until 5 p.m. Monday through Friday. On Saturdays, it’s the breakfast crowd that shows up in droves. The doors close at 2 p.m. that day. The pharmacy half of the business closed years ago.

Tallent grew up just a short distance away, in the Binfield community of Blount County, and is a graduate of William Blount High School. Before taking over the diner, she worked as a caregiver for seniors.

The first order of business was getting the right staff. Tallent admits she had no idea where to start. She asked around and was told one cook, Miranda Russell, was still in the area but working somewhere else. She had been employed at the diner 20 years ago.

“She walked in the very next day and asked if I needed a cook,” Tallent said. It almost seemed too easy.

Russell’s devotion to Greenback Diner goes back even farther. She worked there when she was in high school. “She met her husband here,” Tallent said. Russell said she was only 16 at the time.

Another woman familiar with the day-to-day operation of the restaurant is Connie Colvin, who worked for Rigsby for years. She agreed to stay and work for Tallent. Add Cassie Tucker to the mix, and they are the faces of Greenback Diner. Tallent said a few Greenback students also work for her after school.

On any given day, customers who work in the Greenback area will stop in for a home-cooked meal. So too will retirees in the community. There’s no shortage of children either.

“We have people who don’t miss a day,” Tallent said. One of them is 91-year-old Charlie Helton. “He comes in every day around 10:30 a.m. He has the same thing every day, a regular hamburger.”

Jean Burnett and her nephew are also daily customers. Burnett, who is in her 80s, worked at the diner when she was a teenager.

Another loyal customer is Keith Abel. Tallent said many come in for both the food and the friendship. Some live alone, while others just enjoy getting out of the house for a short time.

Now that Tallent has gotten her business off the ground, she said she would love to see more students from Greenback School come in at the end of their day. Weeks ago when Greenback was in the football playoffs, she opened the diner at 8 p.m. and served hot meals for fans and anyone else who visited.

From a quick glance around, it seems customers love the burgers. Tallent also has daily specials. Meatloaf Monday is popular, she said. Frequent customers also love the country fried steak, chicken salad and baked spaghetti. There is even a Facebook page where you can check out what’s on the menu. Pinto beans and cornbread are the perfect cold weather fare.

While some may have tried to dissuade her from buying the diner because of the long hours, Tallent said it has been relatively easy so far, thanks to the great staff she has in place. It helps if you love what you are doing.

“I love people and making people happy,” she said.

As for her competition, there is one other eatery in Greenback, the Greenback Corner Market and Deli on U.S. Highway 411 South. Tallent said the food is good there, too.

But as the new owner of Greenback Diner, Tallent just wants to give the people what they want — a satisfying meal surrounded by friends, old and new.

“I have so many new friends now, after just one month,” Tallent said.

This is a place where people don’t get in a hurry to eat and run, the food is cooked to order and success is measured in the number of people who come back. “People have to eat. People love to eat,” Tallent said. “I just want to serve the young and old alike. It’s all the same in Greenback.”