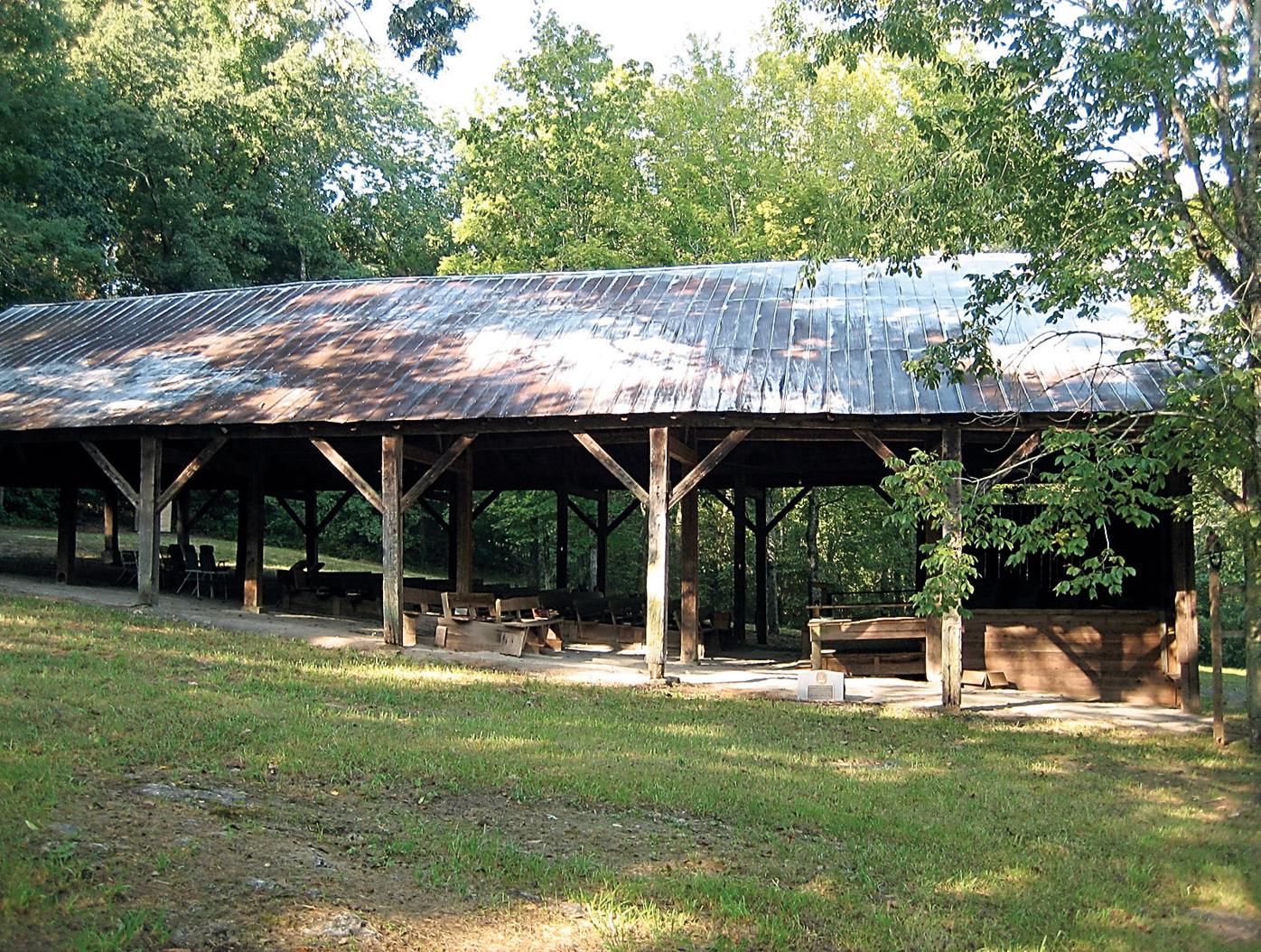 National Campground tabernacle in Greenback has been the location for an inter-denominational gathering since 1873. 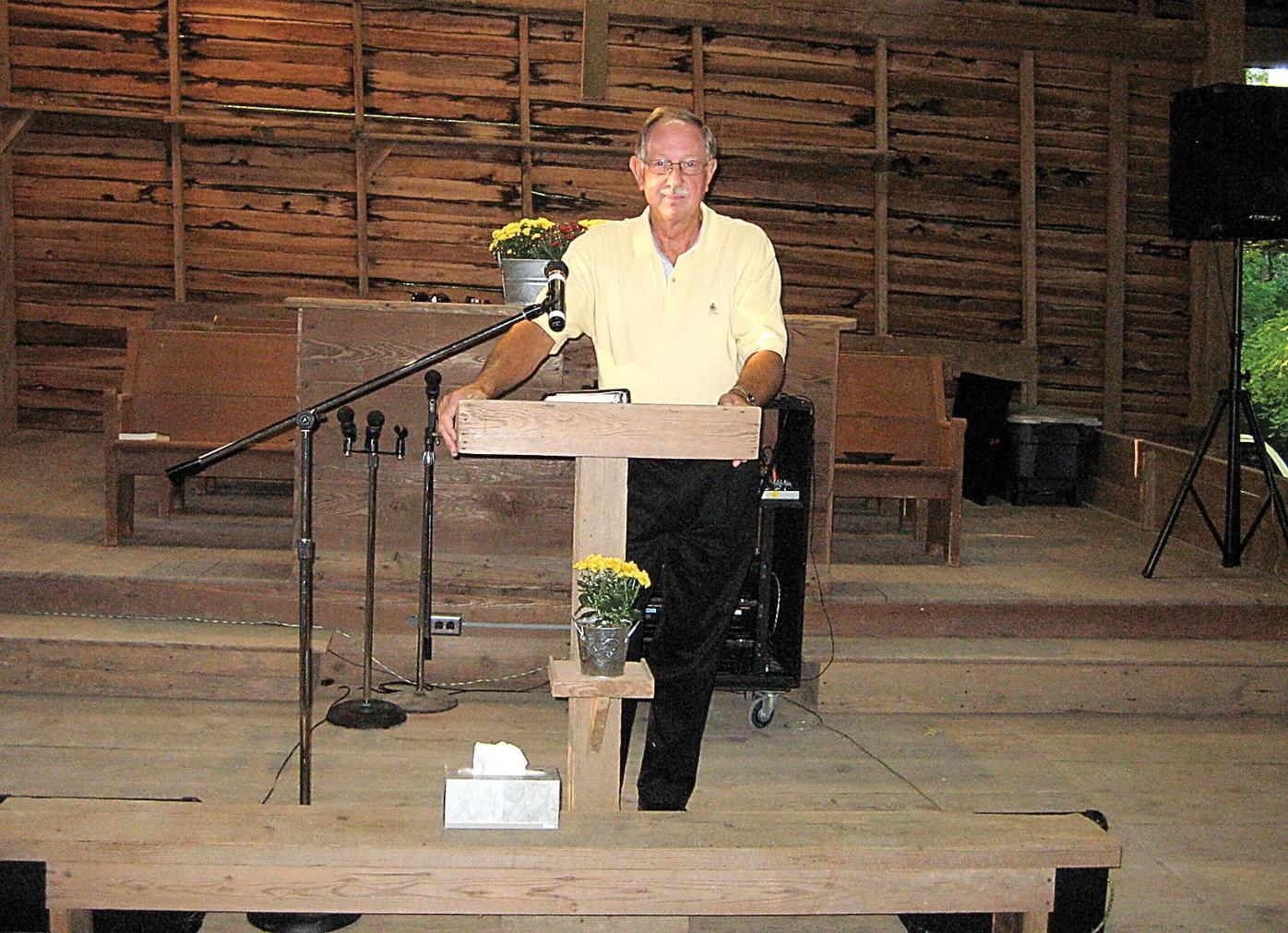 Jimmy Guider stands at the pulpit at the National Campground Meeting tabernacle in Greenback. 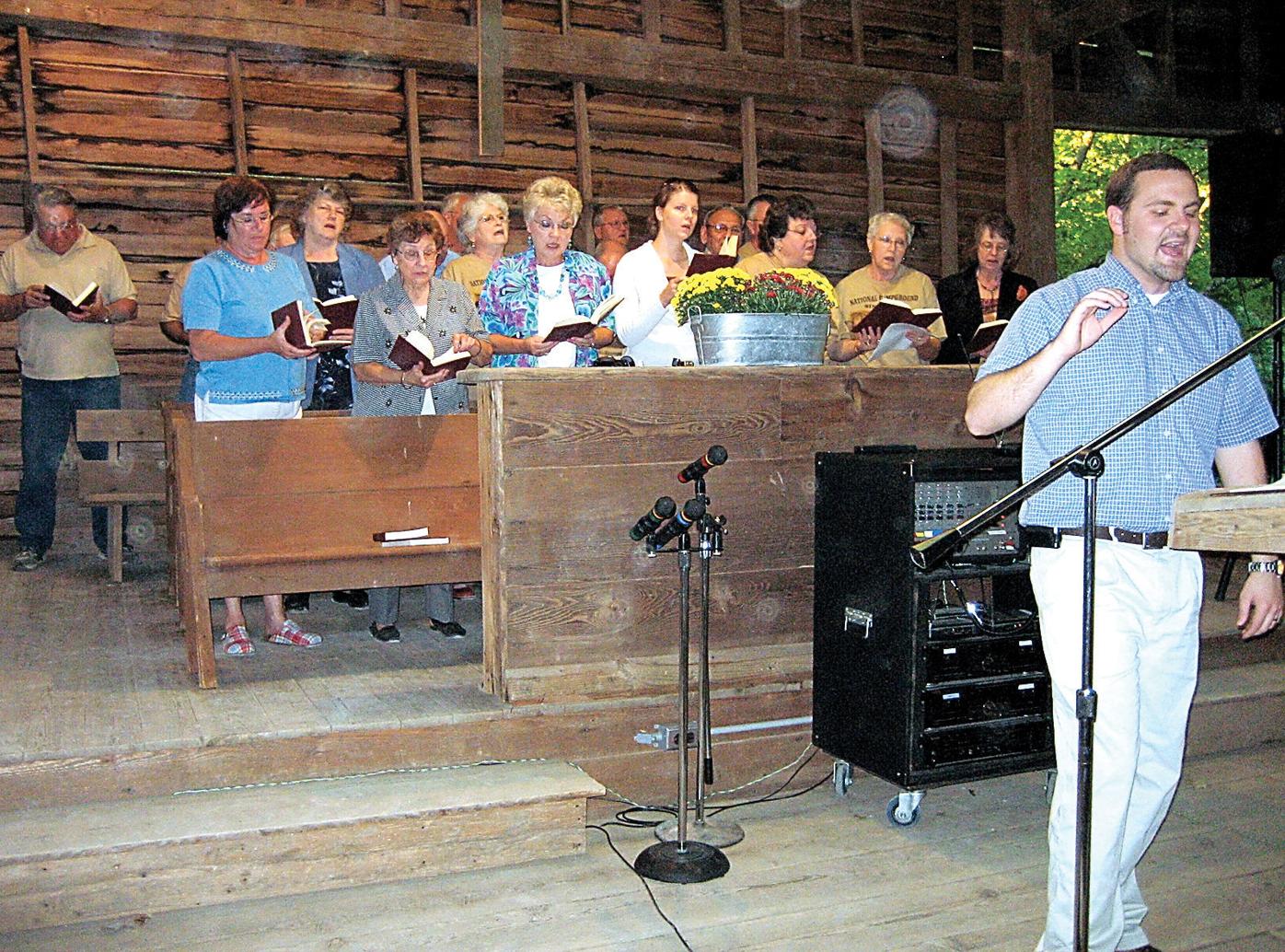 the rev. Keith Ross directs the music at a National Campground Meeting in this undated photo. 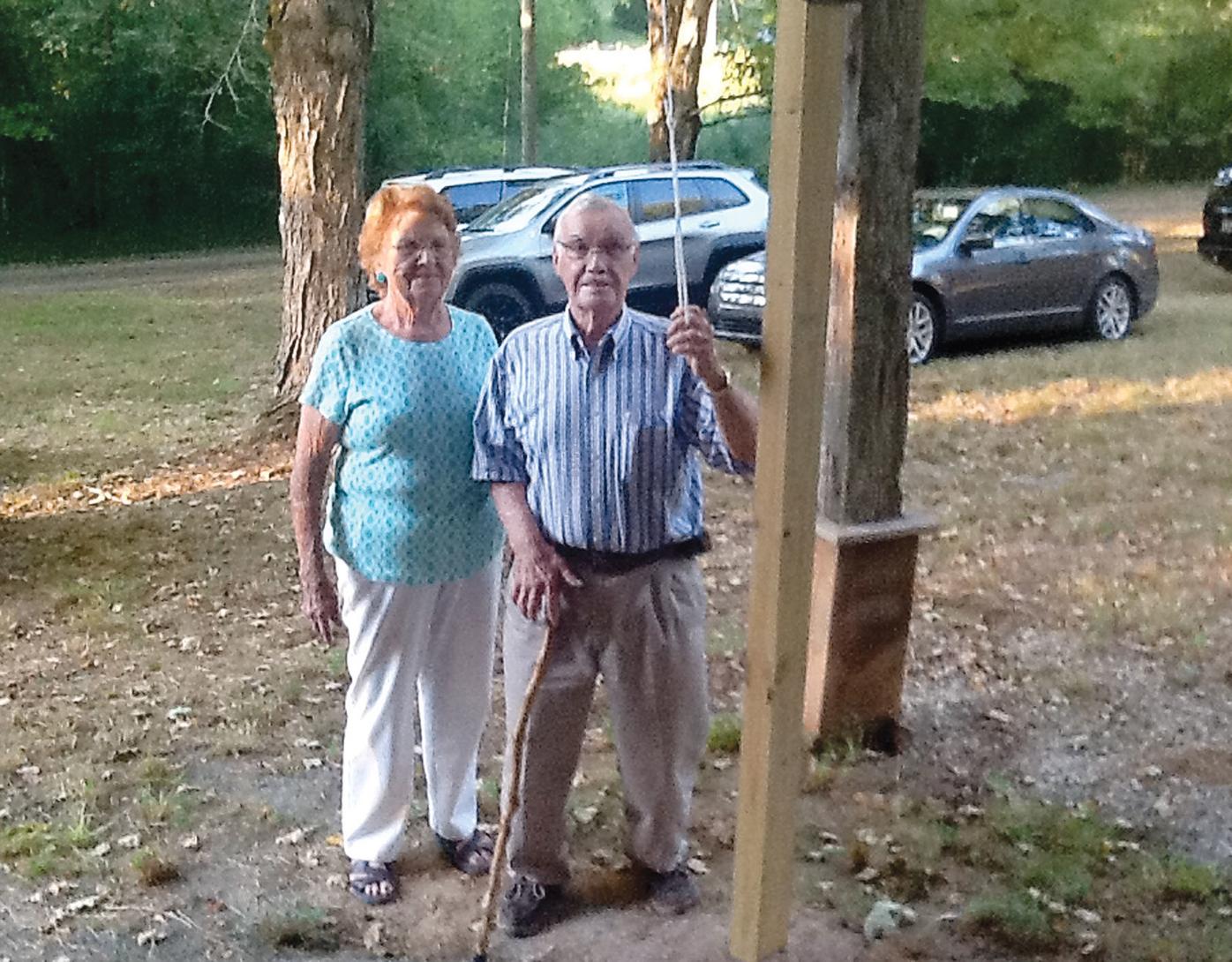 In this file photo, Bobbie Anderson rings the bell at the National Campground with his wife Aileen. 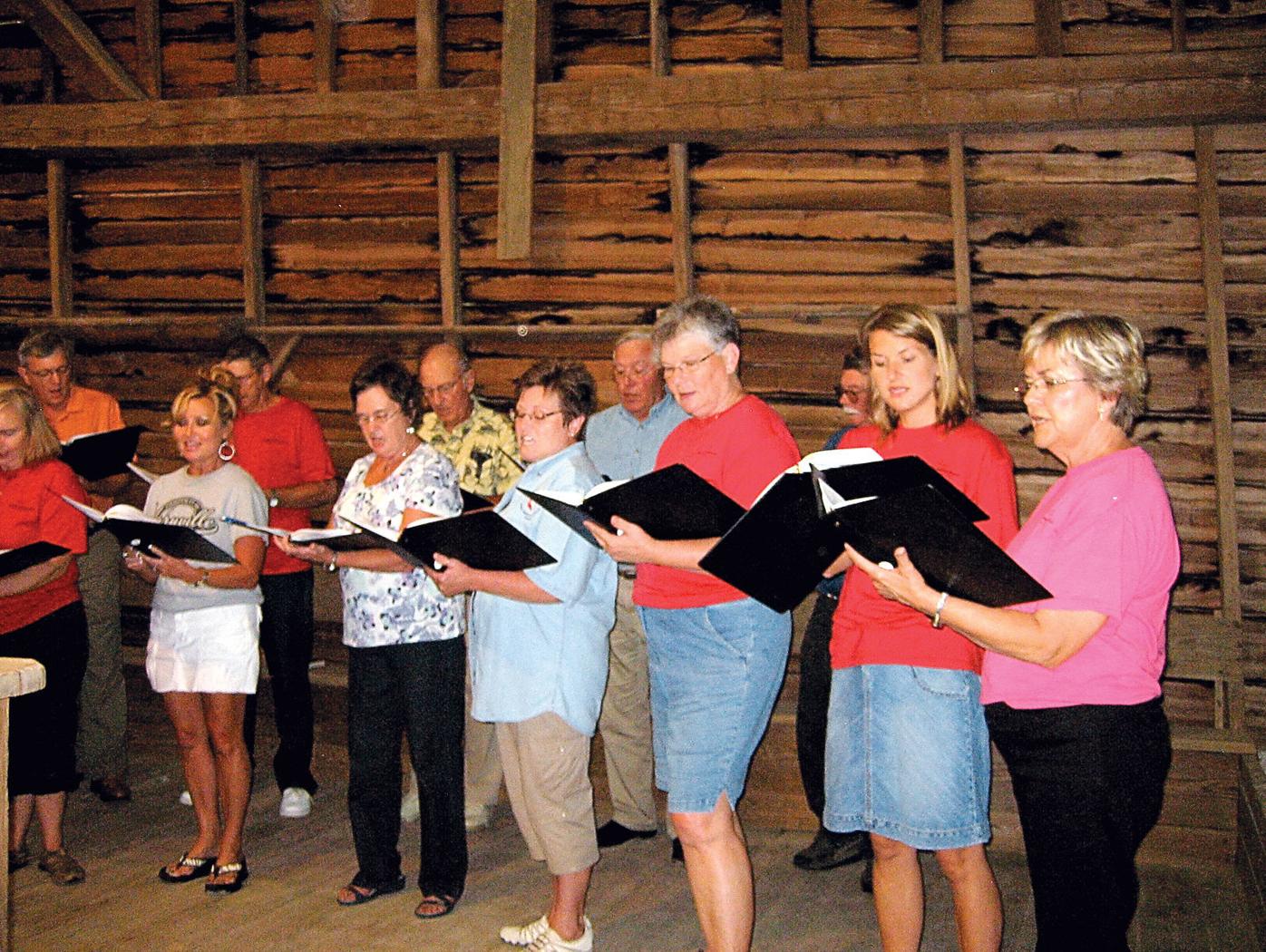 Middlesettlements choir lifts its voices in praise at a previous National Campground Meeting. 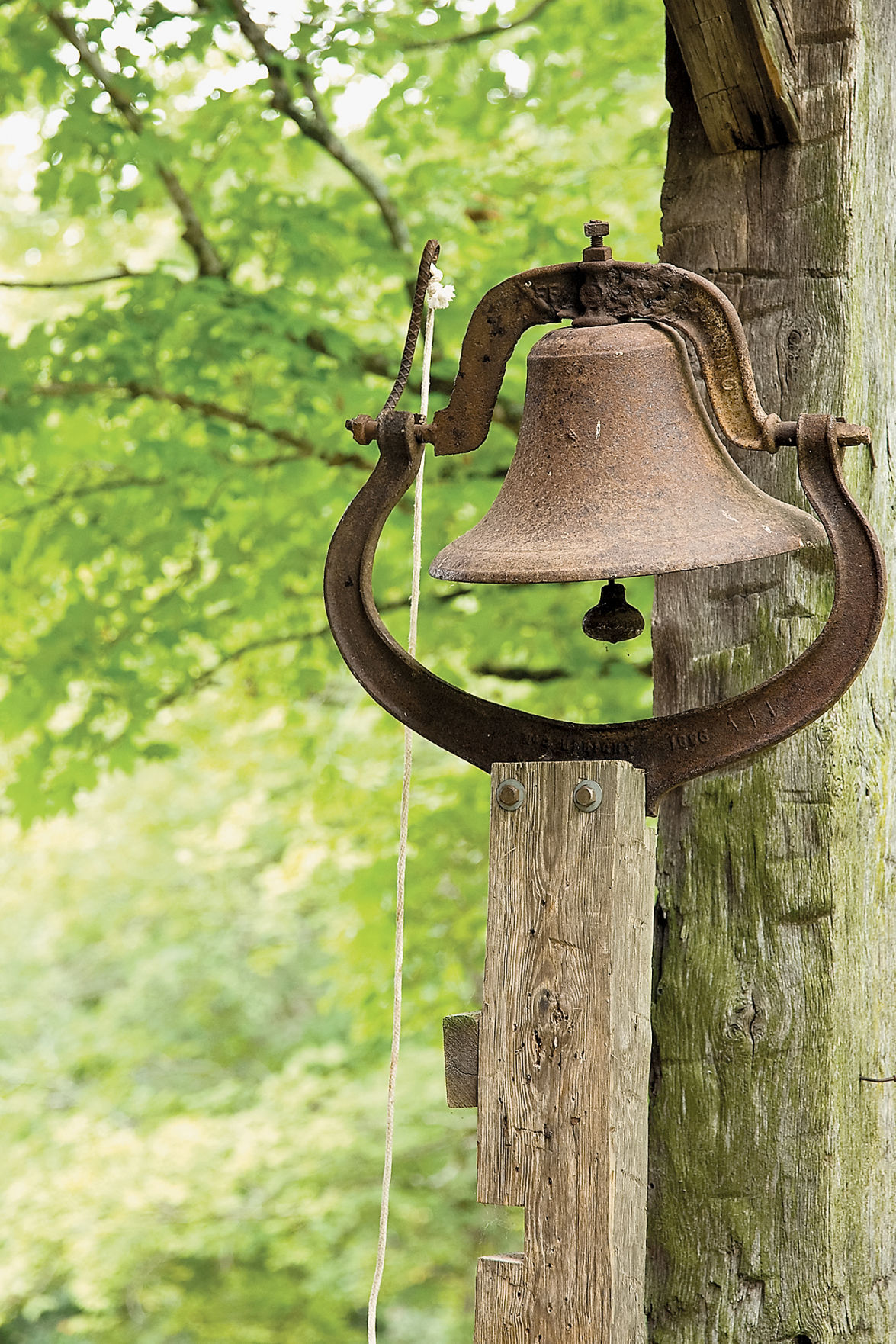 The bell at the National Campground shed is seen in Greenback. 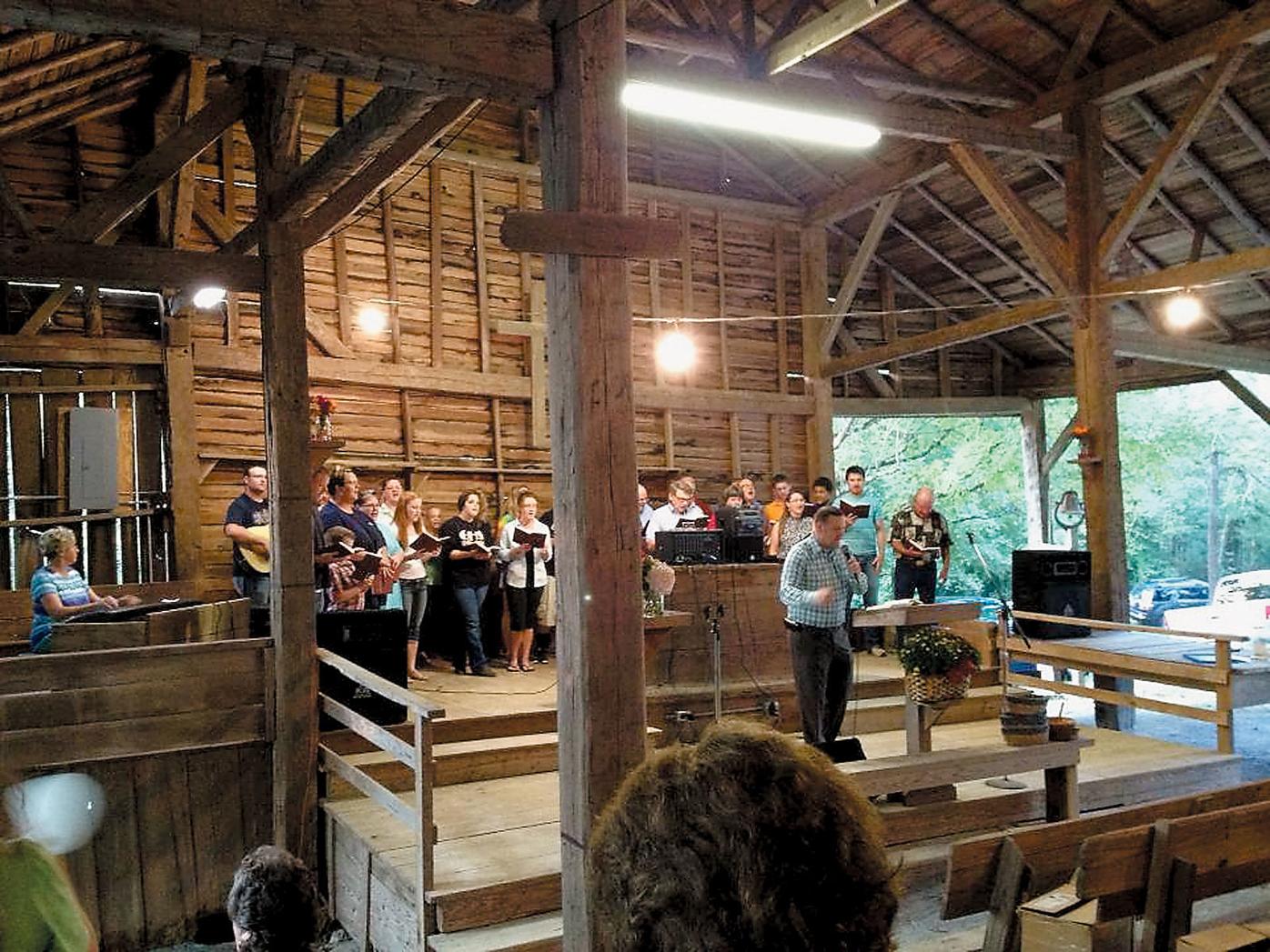 The Rev. Keith Ross leads singing at the National Campground during a recent gathering. Becky Whitehead plays piano and Jimy Stinnett is on guitar. Folks will come together Sunday to once again host this historical event.

National Campground tabernacle in Greenback has been the location for an inter-denominational gathering since 1873.

Jimmy Guider stands at the pulpit at the National Campground Meeting tabernacle in Greenback.

the rev. Keith Ross directs the music at a National Campground Meeting in this undated photo.

In this file photo, Bobbie Anderson rings the bell at the National Campground with his wife Aileen.

Middlesettlements choir lifts its voices in praise at a previous National Campground Meeting.

The bell at the National Campground shed is seen in Greenback.

The Rev. Keith Ross leads singing at the National Campground during a recent gathering. Becky Whitehead plays piano and Jimy Stinnett is on guitar. Folks will come together Sunday to once again host this historical event.

Weddings have been held here over the years as well as history tours, but the grounds that make up the historic National Campground in Greenback mostly sit idle.

That is, until early September when people gather for the annual Campground Meeting that brings together people of many denominations. They’ve been coming here to this very spot since 1873. Baptists, Methodists, Presbyterians and Quakers were the first ones that bonded together in the aftermath of the divisive Civil War. The goal of this gathering was healing a community through a uniting of faith.

The first meeting was held in 1873 in a tent, but shortly after that a permanent structure was built. There are no other continuous interdenominational camp meetings as old as this one.

The 2018 meetings will take place Sunday, Sept. 9, through Thursday, Sept. 13. Services will start each day at 7 p.m. in the outdoor, covered shed. Music will be led by Keith Ross. Anyone who wants to join in an outdoor worship experience with others of faith are welcome to join in.

The schedule includes the Rev. Mark Hester of Cumberland Presbyterian, preaching on the first night, Sept. 9. The Rev. Richard Carnes of Axley Chapel United Methodist will lead on Sept. 10. Friendsville Friends’ minister the Rev. Brian Brantley will have the Sept. 11 service, followed by the Rev. Lon Shockley of Greenback First Baptist on Sept. 12. The final service on Sept. 13 will have the Rev. Nicholas Perkins of Greenback Presbyterian as the speaker.

“We have three new ministers that have never preached before at the annual meeting,” said Jimmy Guider, chairman of the National Campground. “A Baptist, a Presbyterian and a Friends. We are excited about that.”

Regular maintenance is done to keep the grounds and structure in good shape. On a recent weekend, some gathered to give it a once-over before the shed fills with worshippers and music echoes

Tree limbs that had fallen were removed, Guider said. He said tidying up also included placing drainage tiles along an area where a ditch had washed out near the tabernacle. The final workday will be held on Saturday, Sept. 8.

Guider is serving as chairman this year, as he did in 2017. He has taken over the duties from Bobbie Anderson, who was the face of this annual trek for decades. Anderson began coming to the National Campground Meeting when he was just a toddler. He is a direct descendant of W.H. Anderson, one of the founding officers of the meeting.

Word has gone out to area churches, as Guider and other leaders hope to reach more of the congregations and invite them. It has been a challenge over the years to get more young people to participate in a worship experience reminiscent of days gone by. Attendees bring their own chairs to sit under the shed as night symphonies of crickets and frogs can be heard along with the nightly message.

The event typically draws from Blount and Loudon counties.

The site is on the National Register of Historic Places, listed there back in 1972. There is a bell that rings these services into existence every night.

Come one, come all

Attendance has ebbed and flowed over the years, with weather playing spoiler on occasion. Guider said last year at Monday’s worship, the remnants of a hurricane down South threatened to cancel the evening. It went on as planned, with about a dozen in attendance. The preacher that night spoke on love.

“There weren’t that many people there, but the spirit was there,” Guider said.

Like Anderson, Guider began coming to the National Campground Meeting as a small boy. He said he had a neighbor, Kathleen Long, who would stop and pick him up. He has attended many times over the years and started coming each year beginning in 1992.

There is nothing like hearing the word of God delivered outdoors under the stars, he said.

“It is a more peaceful type of experience,” Guider said. “There isn’t a lot of noise, just the sounds of the night, the crickets and whatnot. It’s more peaceful, and you have people coming there with a purpose of worship.”

And while there are many like Guider who have been coming here for years, they know survival of this camp meeting that has stretched across 145 years depends on future generations embracing it. Guider said he makes it a point to greet each newcomer to express his gratitude for their participation. Most come away changed by the experience.

“They are in awe about the tabernacle itself and all of those meetings that came before,” he said. “They come away having been blessed and revived by joining in.”

The benches that served worshippers at the shed are mostly gone now, but the shed that has seen generations of worshippers stands firm. Guilder said it can be overwhelming to realize the task at hand: to make sure these continuous, joyful praises still ring for decades to come.

“It is a humbling thought, to think it is our responsibility to keep it going for the next generations,” Guilder said. “It’s been part of our lives. It makes good memories.”

The annual National Campground Meeting will take place Sunday, Sept. 9 through Thursday, Sept. 13 at the historic site located at 1849 King Road in Greenback. All denominations welcome.