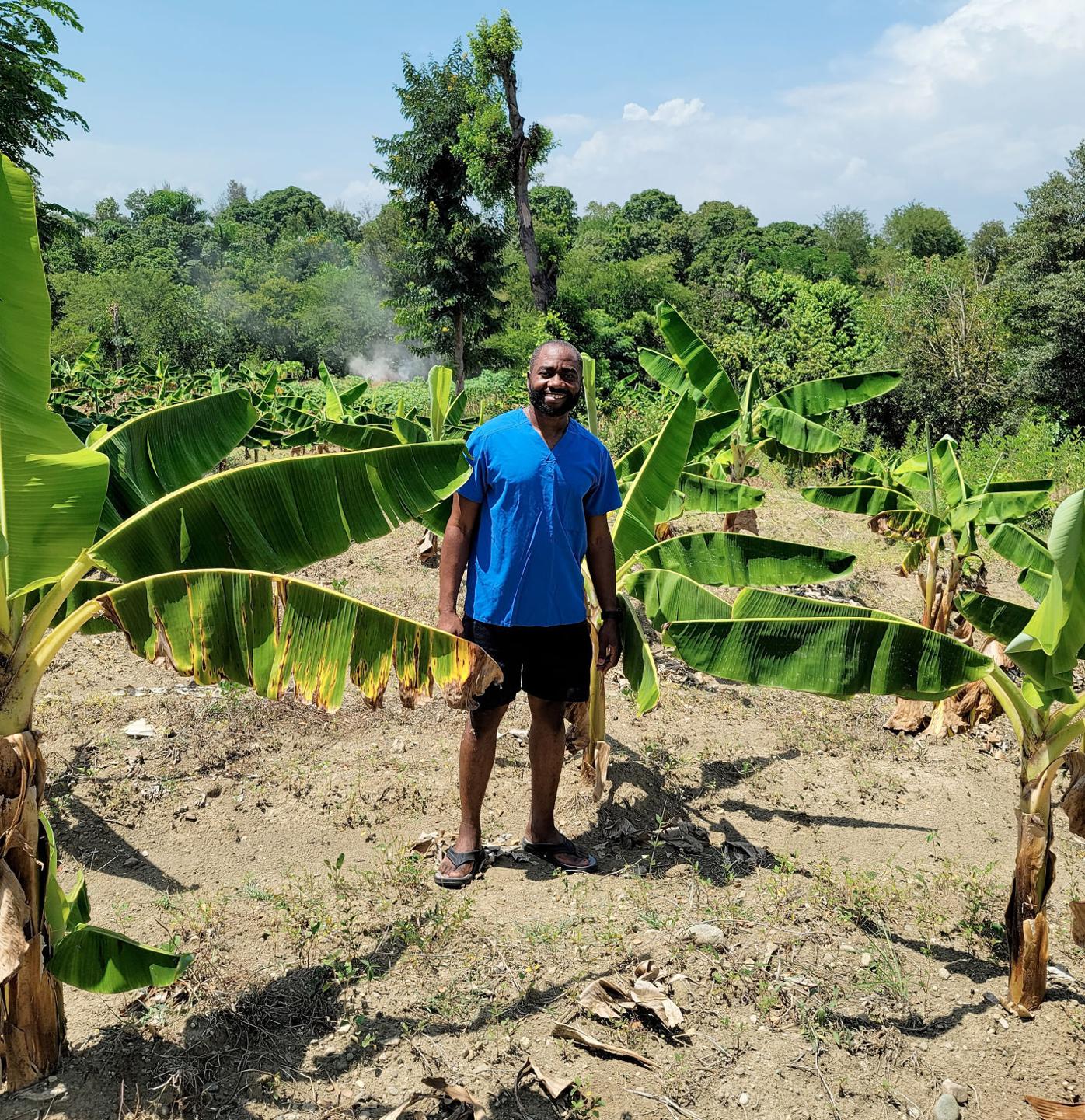 Jemps Maignan near some plantain trees in Haiti. He hopes to start planting crops soon that will support the school he founded in Haiti. 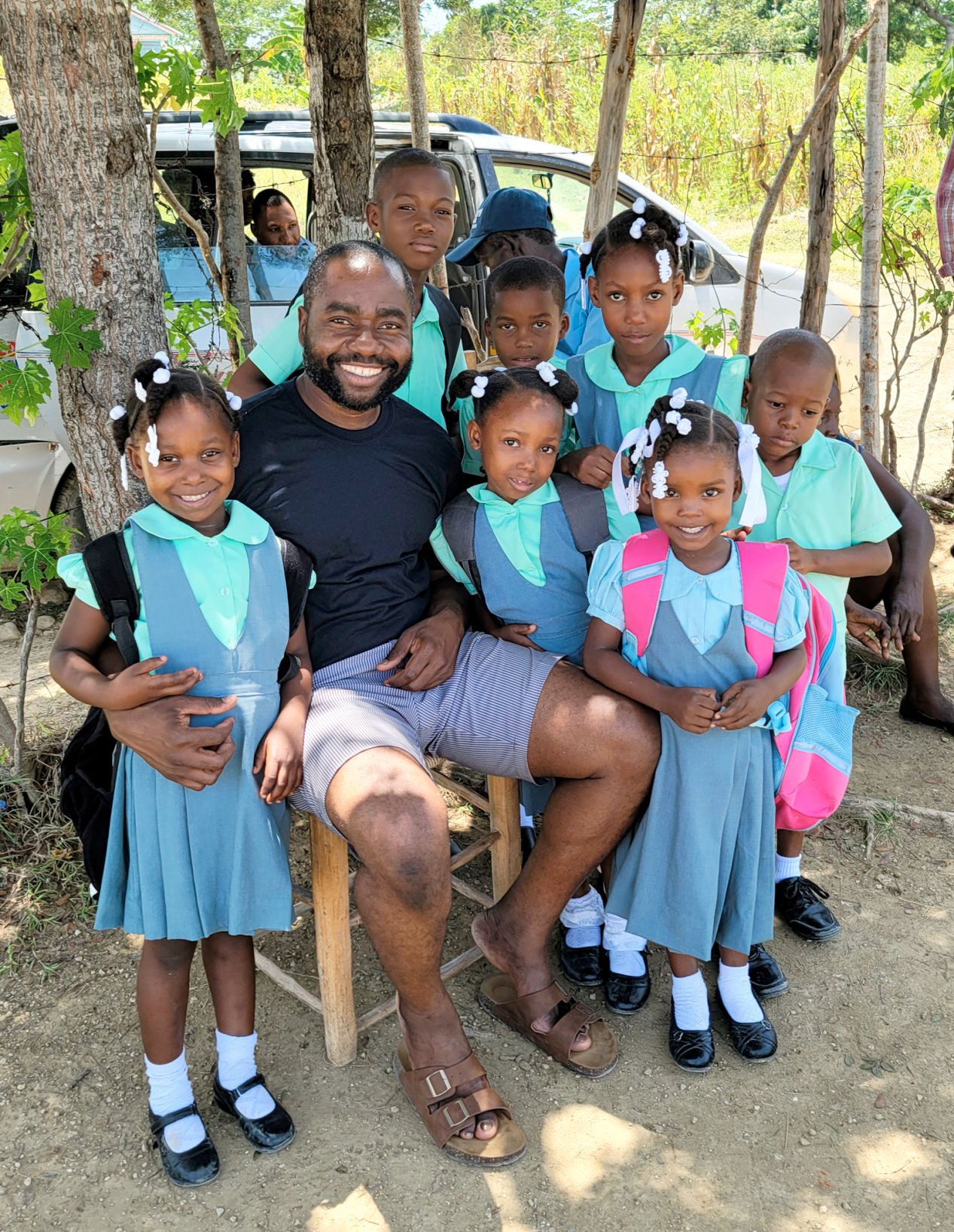 God’s Planet for Haiti Founder Jemps Maignan made a recent visit back to Haiti to attend the opening of the school and make repairs. 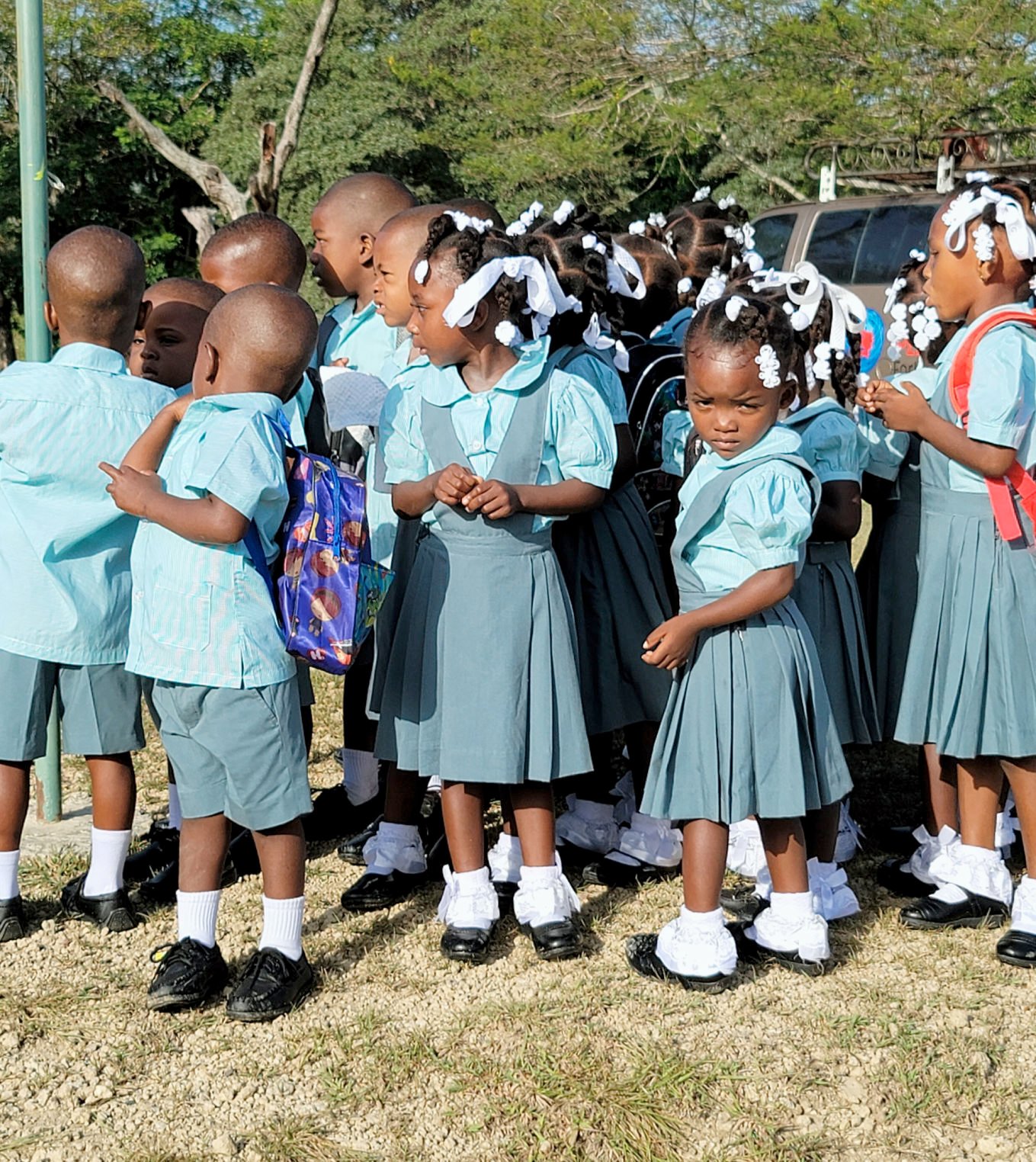 Students at God’s Planet for Haiti Christian School attend the opening of their school recently. 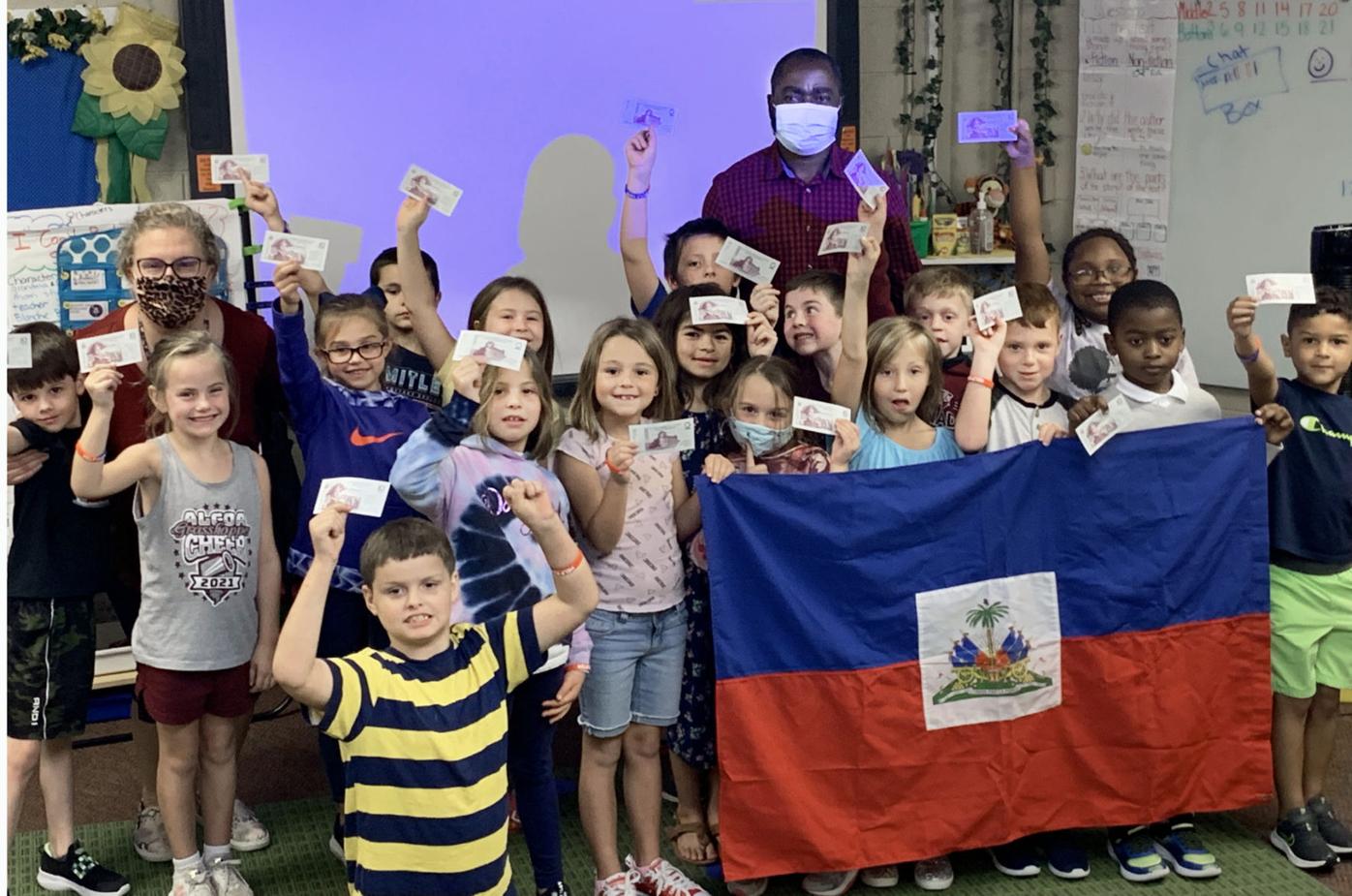 Jemps Maignan visits his son’s class at Alcoa Elementary and gives a lesson on Haiti. 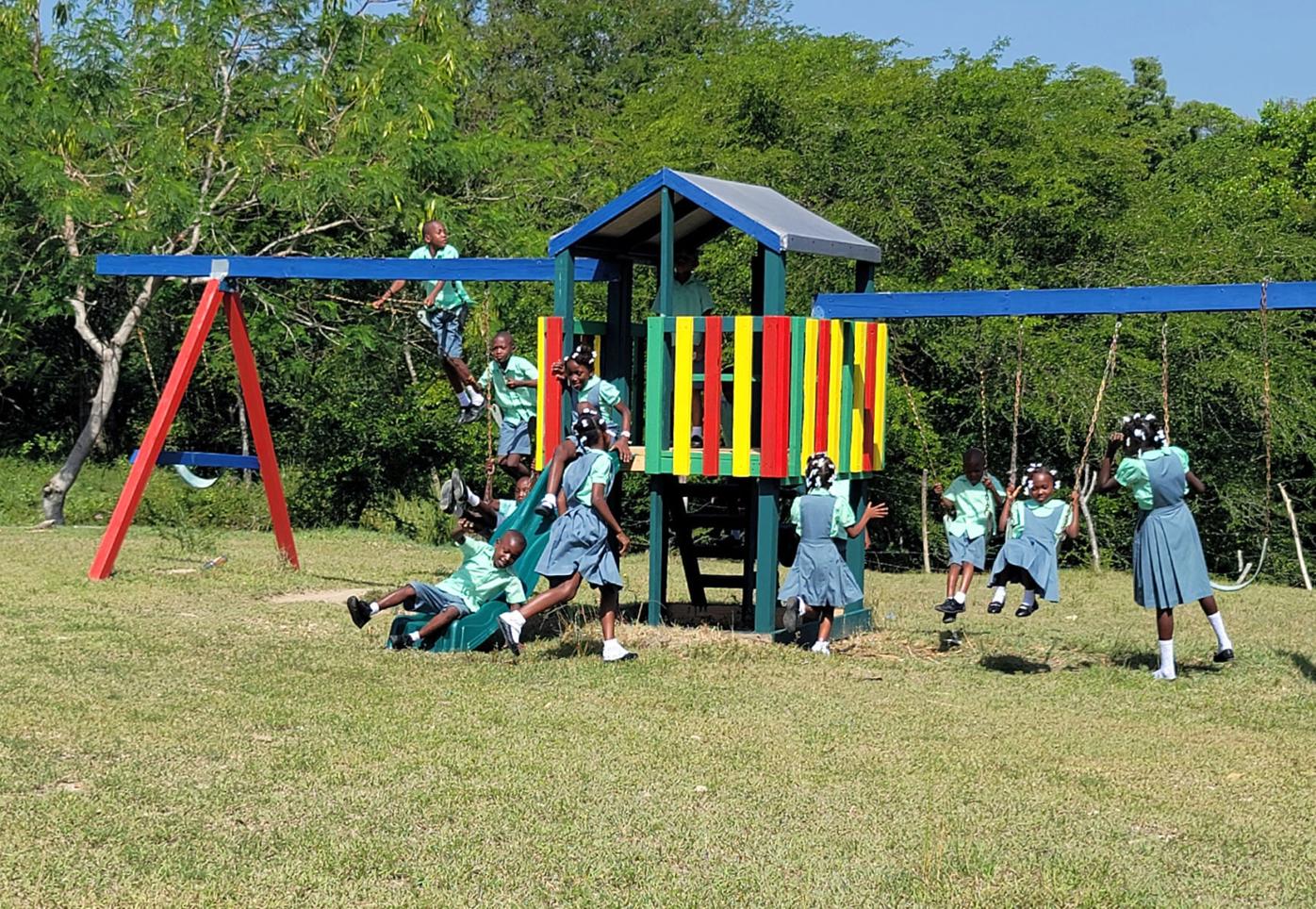 The playground at God’s Planet for Haiti Christian School in Haiti.

Jemps Maignan near some plantain trees in Haiti. He hopes to start planting crops soon that will support the school he founded in Haiti.

God’s Planet for Haiti Founder Jemps Maignan made a recent visit back to Haiti to attend the opening of the school and make repairs.

Students at God’s Planet for Haiti Christian School attend the opening of their school recently.

Jemps Maignan visits his son’s class at Alcoa Elementary and gives a lesson on Haiti.

The playground at God’s Planet for Haiti Christian School in Haiti.

When Jemps Maignan says he is thankful for East Tennesseans who have helped him turn a dream into a reality in his native Haiti, he points to people like Marie Hrom and her family from Maryville.

Hrom has witnessed the building of God’s Planet for Haiti Christian School in a village in Hinche, Haiti, 60 miles outside Port-au-Prince. She said she met Maignan, the founder, years ago as they both attended a Bible study at a church in Townsend. They soon became great friends.

“I was at the opening of the school,” she said. “It was the most amazing thing I have ever experienced. The families are so eager to get their children into school.”

Hrom said when she first visited the site, the school had a dirt floor and a few walls up. It now serves 87 children. There are six classrooms, office, storage area, kitchen, cafeteria, restrooms and multi-purpose building along with playground. Students range in age from 3 to 13.

The property totals 7 acres and is owned by this nonprofit.

“I got to go back and see the extended school, a church auditorium. It is so good to see the growth and the vision that Jemps has had for all of these years. He has never given up.”

Schools like this are needed because the Haitian government cannot adequately provide enough schools, so private ones fill in that gap.

Hrom’s husband, James, is a nurse and has also made trips to Haiti and provided a health clinic for God’s Plant for Haiti families. This Blount County family jumps in each Christmas to provide shoeboxes full of gifts for the students in this school for elementary-age kids.

In addition, their daughter, Libby Merickel, and her husband, Raymond, and their two daughters, Abbigail and Addison, are always a huge help when it comes to getting shoeboxes to the Haitian children. A meal is always served for the entire community when the boxes are delivered to Haiti.

Those shoeboxes will be needed soon, Maignan, 42, said after returning from a short trip to Haiti. He arrived back here in Blount County after going to the Haitian school he founded to see it start one more year. This is the school’s 10th anniversary.

On this trip, Maignan was able to paint the school and cafeteria and also repair some bookshelves and benches. He said a generous donation from some nurses he met through Remote Area Medical allowed him to get lots of the tasks completed. The three also donated school supplies. Maignan’s church, Shepherd’s Glory, is a supporter too.

While in Haiti for this most recent visit, Maignan held a meeting with parents. They are planning a 10th anniversary celebration on Oct. 31 at the school. Maignan said there will be a service with all students attending, including former ones.

The biggest plans discussed are for the school’s agriculture project to launch. Thanks to Don Smith, funds were obtained to purchase a water pump to irrigate the crops.

“By the end of the month, we hope to plant 400 plaintain trees,” Maignan said. “We are also going to plant green peppers and hot peppers. We are giving this a big try this year.”

The tropical climate of Haiti means crops can grown and harvested year-round, Maignan said. This ministry will need help with getting the necessary equipment.

The hope is to sell some of the harvest to provide support for the Christian school. It takes $3,000 per month to feed and educate students and pay staff, Maignan said.

There are also plans to raise bees and sell honey, Maignan said.

Building the school in blocks is also on the list of projects. That will make it more durable, the founder said.

The most urgent need at this point is to collect items for shoeboxes for the students, Maignan said. That includes things like underwear, T-shirts, socks, toothpaste and toothbrushes.

Maignan’s trips to his homeland are shorter now that his son, JJ, is in school. The first grader attends Alcoa Elementary School. Maignan said he went there on a recent Friday at the request of a teacher to teach the kids about Haiti.

“They had so many questions,” he said. “They want me to come back every Friday and teach them some French.”

It was 13 years ago that Maignan first came to the United States. He gained his citizenship a few years ago.

It is Maignan’s hope that one day God’s Planet for Haiti Christian School will be able to add a high school. That will only happen, he said, with more support. He is grateful every day, he said, for this journey.