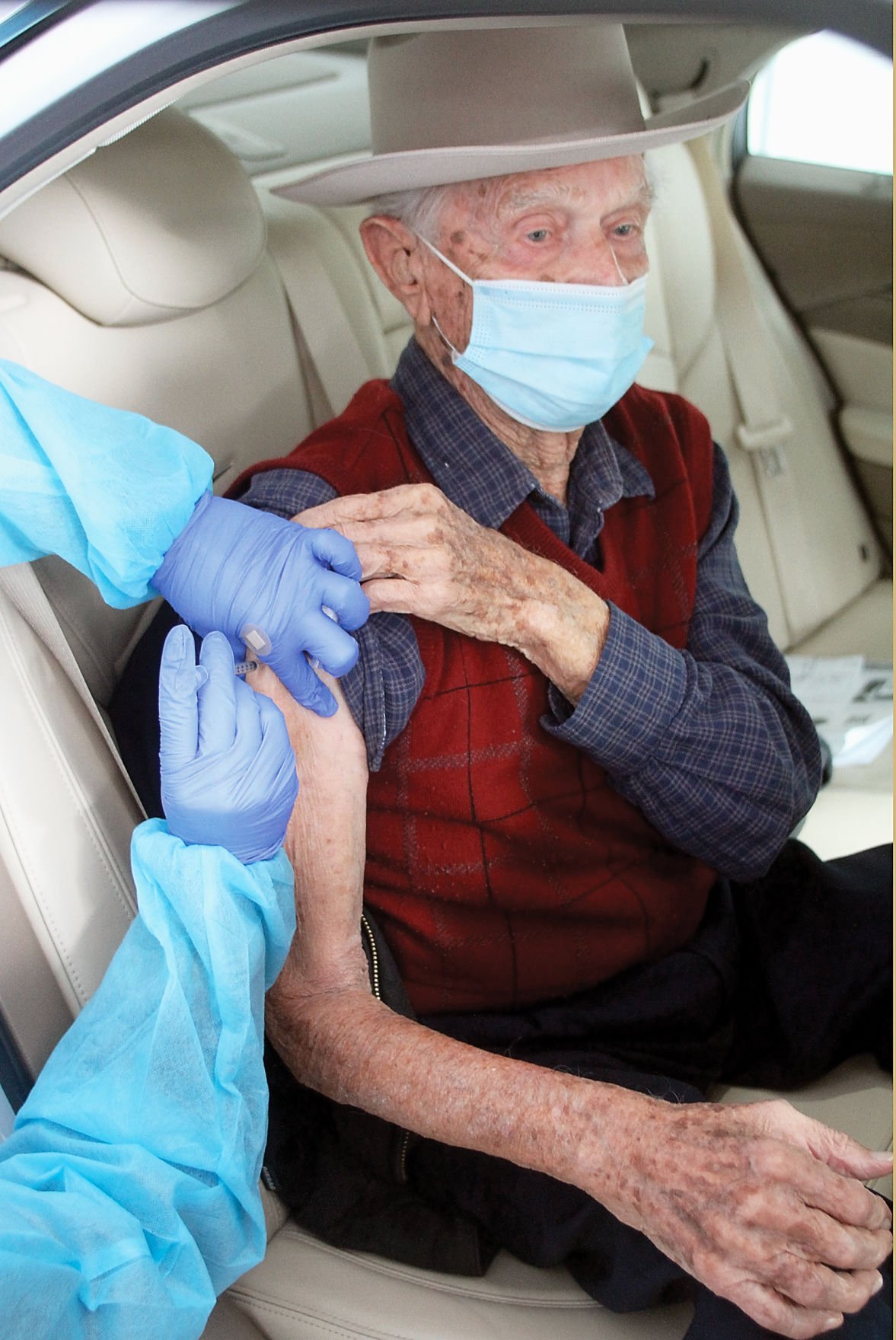 Sterling Hearon rolls up his sleeve Friday morning to get his second dose of the COVID-19 vaccine at the Blount County Health Department. This was also his 98th birthday. 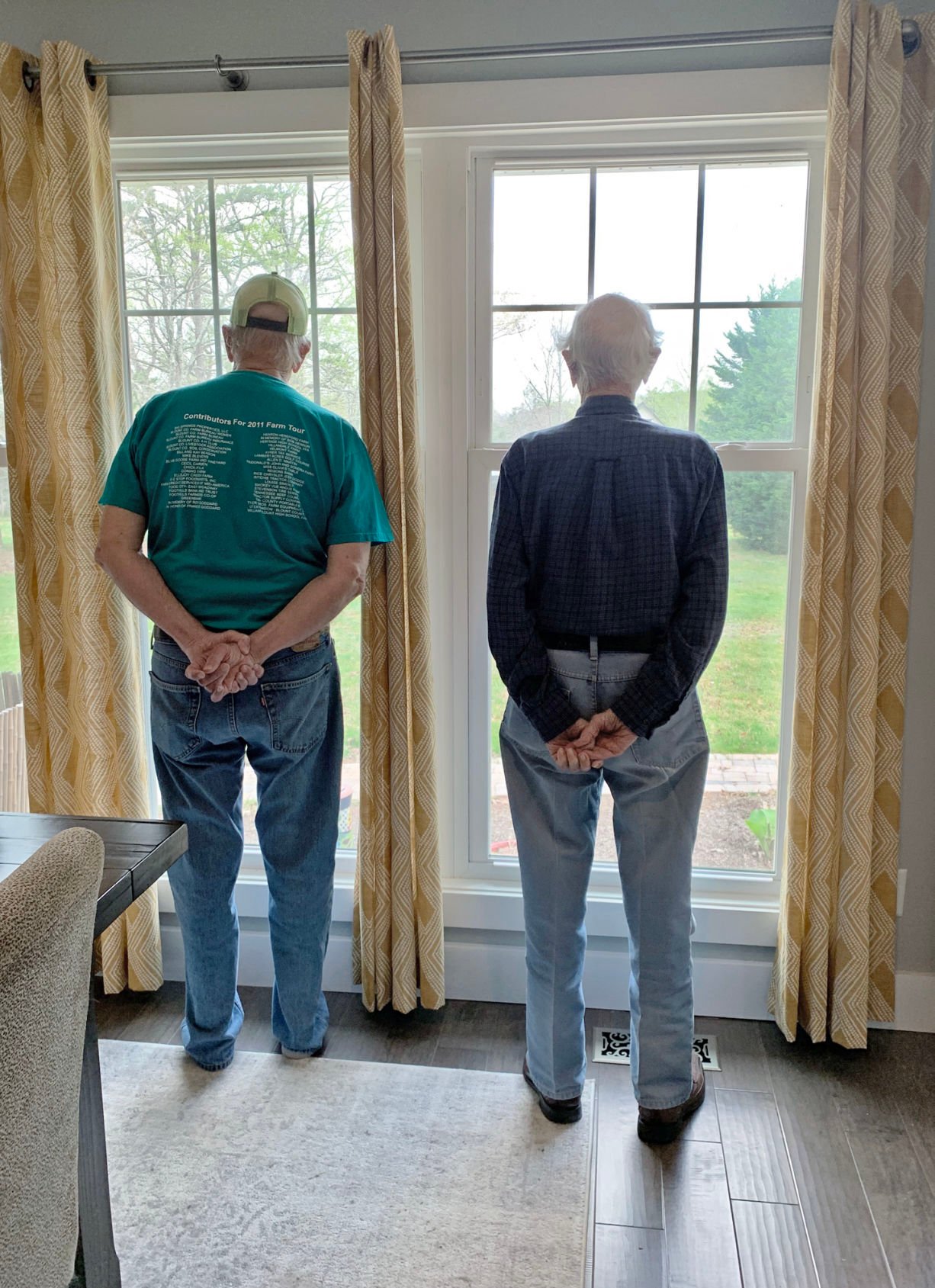 Sterling Hearon (right) looks out on his cattle with son, Dennis. 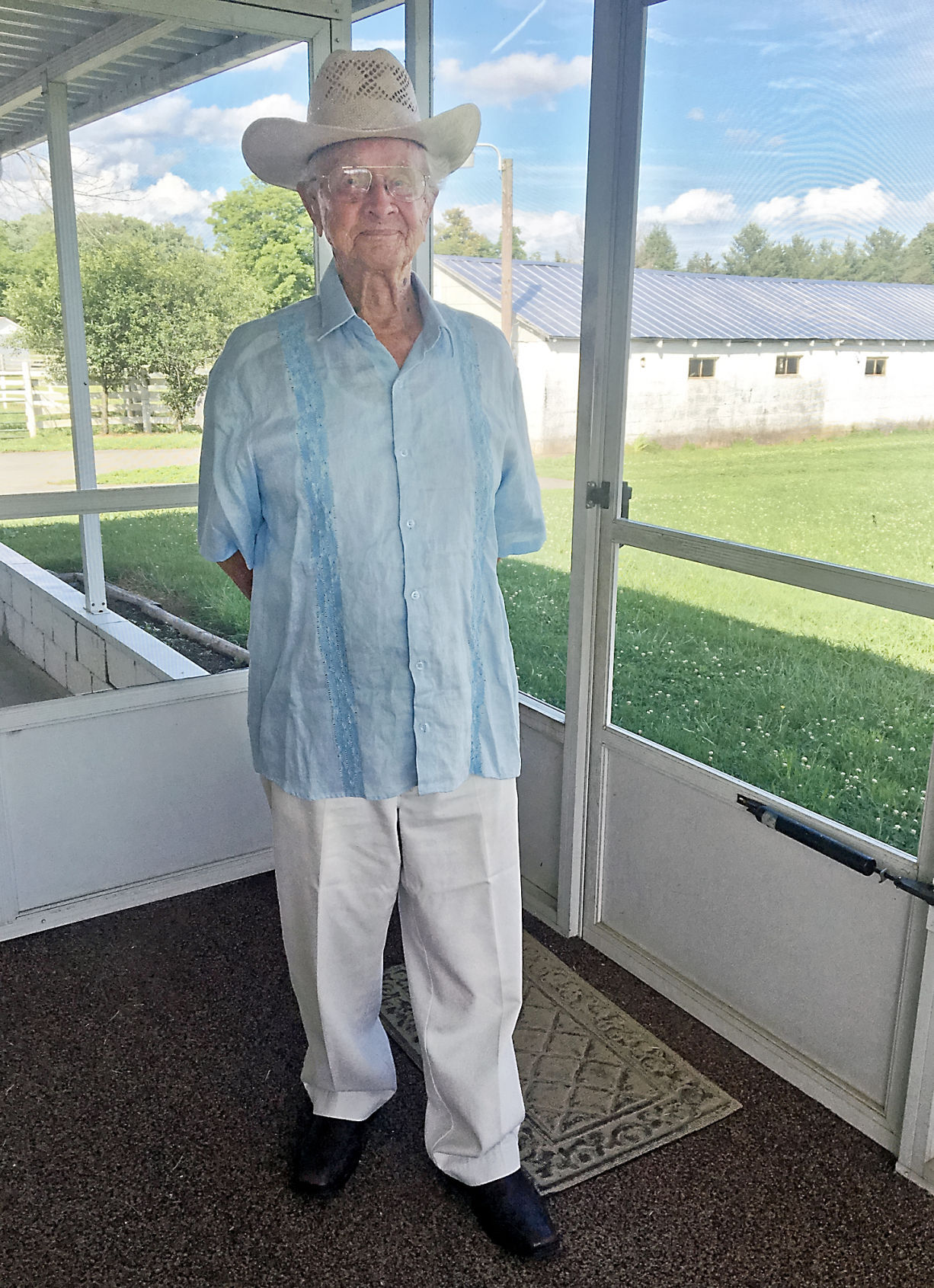 Sterling Hearon doesn't go too many places without his hat. He still works on his farm at 98 years old. 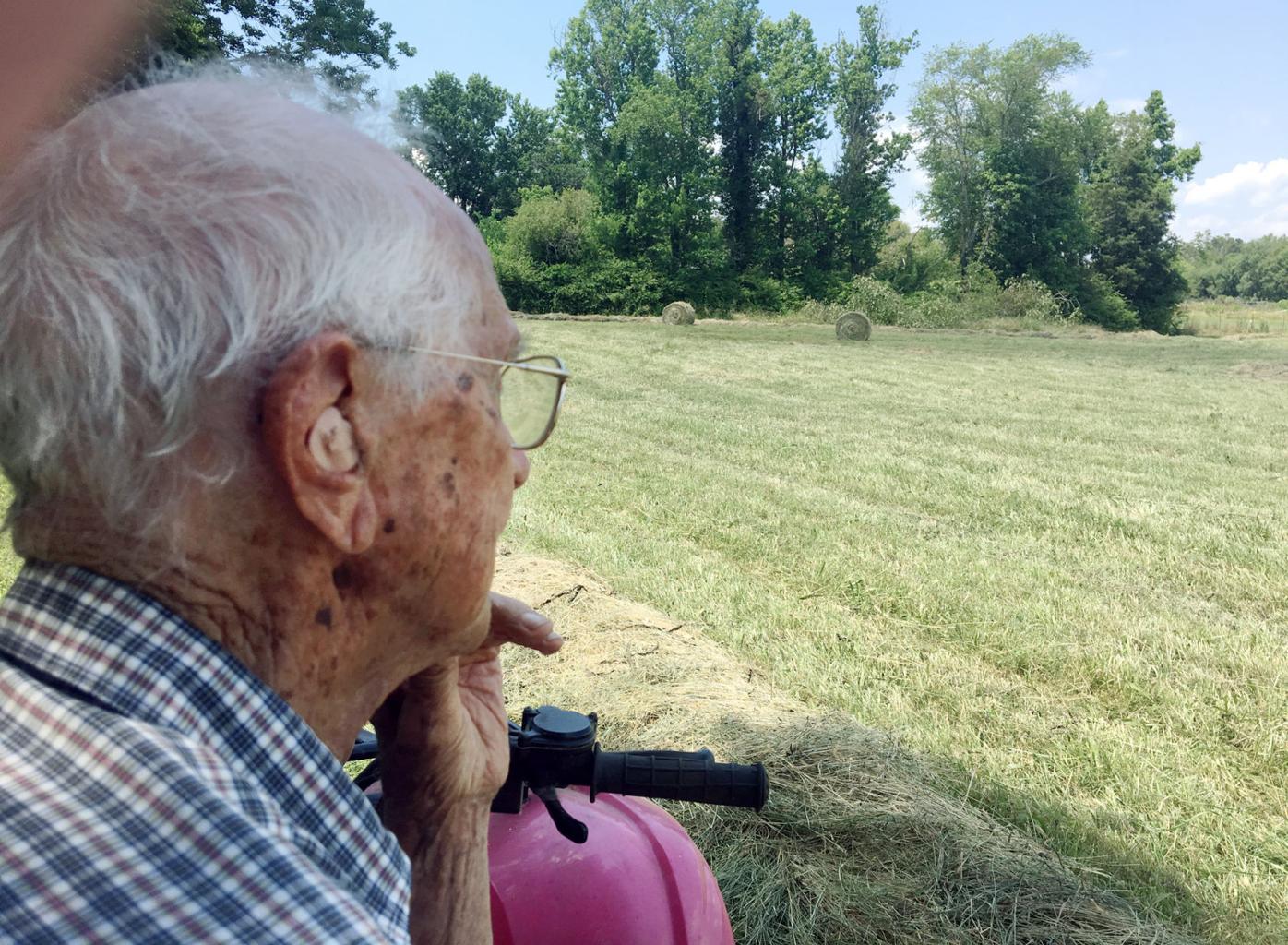 Sterling Hearon watches his son, Dennis, get some work done at the farm. 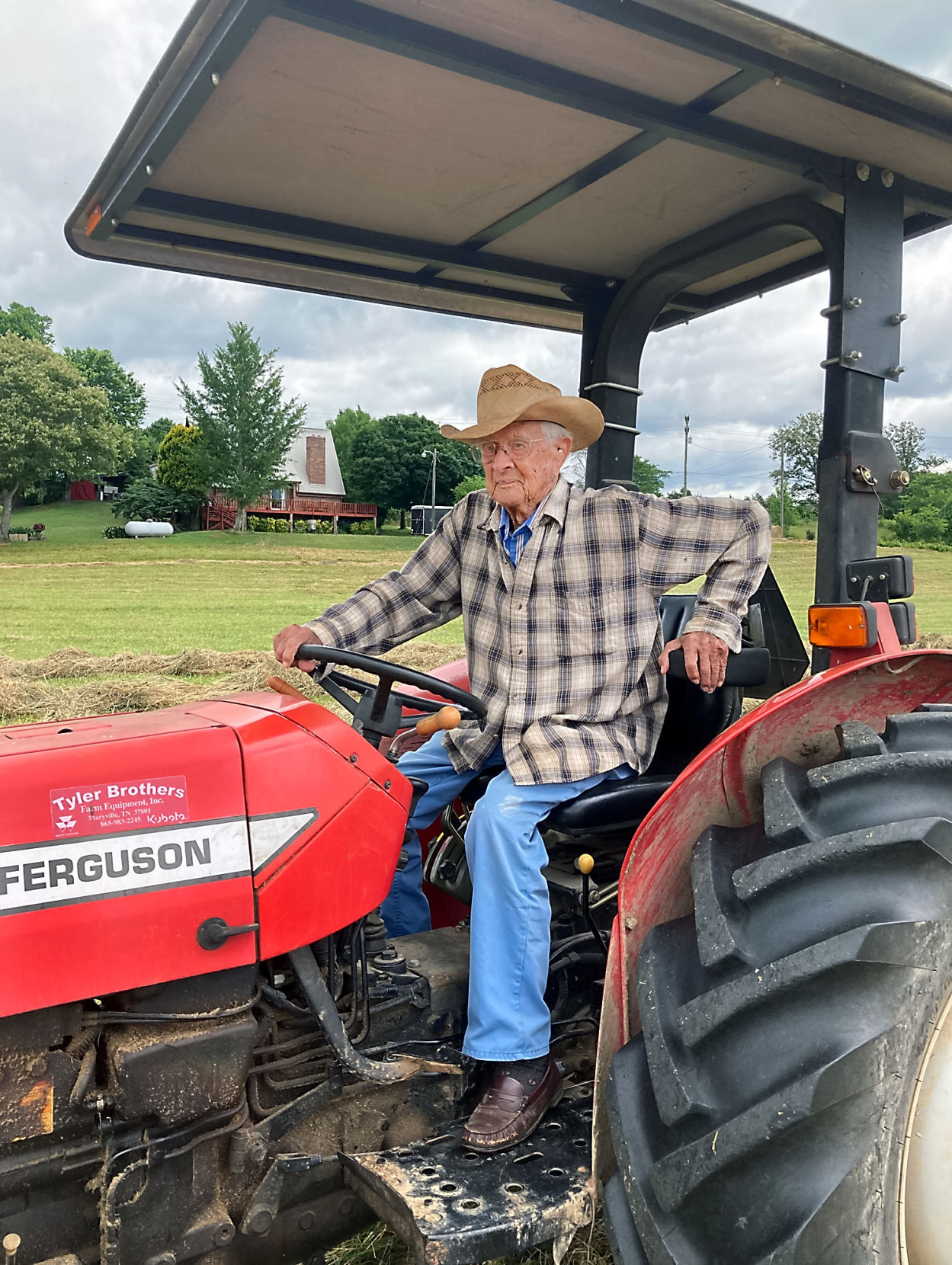 Sterling Hearon aboard his tractor at his farm in Maryville.

Sterling Hearon rolls up his sleeve Friday morning to get his second dose of the COVID-19 vaccine at the Blount County Health Department. This was also his 98th birthday.

Sterling Hearon (right) looks out on his cattle with son, Dennis.

Sterling Hearon doesn't go too many places without his hat. He still works on his farm at 98 years old.

Sterling Hearon watches his son, Dennis, get some work done at the farm.

Sterling Hearon aboard his tractor at his farm in Maryville.

When Sterling W. Hearon rolled up to the drive-thru tent Friday morning for his COVID-19 vaccine, he had two reasons to celebrate.

The Maryville native was getting the second dose of the lifesaver at the Blount County Health Department.

And he turned 98 that day as well.

In the car with him were his son, Dennis, and granddaughter, Shanna. Sterling was the first in his car to roll up his sleeve for the vaccination; Dennis also had an appointment and did the same.

Neither of the two shots hurt, the father and son reported. Both said they are fortunate to have been able to get their appointments with so many on waiting lists all over the country. Sterling added he can’t wait to get back to living life the way it was meant to be.

Sterling was born on Feb. 5, 1923, in Happy Valley in Blount County. His parents are the late Albert Gilmore Hearon and Tenia Carpenter Hearon. Sterling has eight brothers and two sisters; he is the last living sibling.

Well-known in the community

On Friday, this pillar of the community was wearing his cowboy hat and explained he rarely goes anywhere without it. He and his wife, the late Jean Wilson Hearon, purchased their first parcel of farmland in 1948 and grew their family farm to more than 100 acres. Jean died in 2013, but Sterling continues to raise cattle with Dennis’ help.

Before that, Hearon honorably served his country. This World War II veteran spent time aboard the USS Pelias, a maintenance and repair ship for submarines in the South Pacific. He came home to work in a hardware store in downtown Maryville and eventually earned a bachelor’s degree from the University of Tennessee.

Hearon then went on to teach in Blount County Schools, first at Townsend. When Everett High School closed as a high school, he became the principal there for the special education program.

His time in education totaled 28 years and ended with his 1985 retirement. His wife also taught school for many years.

As members of the National Guard directed traffic at the vaccination site Friday, Dennis and Shanna pointed out this was Sterling’s 98th birthday. Many passed on their well-wishes. One of them got emotional as she recalled Jean Hearon as her teacher in elementary school. She gave Serling a heartfelt congratulations on this monumental day.

This 98-year-old has lived his entire life in Blount County with the exception of his time in the Navy. His community service includes many organizations. In 2001, he was awarded the Distinguished Service Award by the Tennessee Farm Bureau Federation, honoring him for his service to the Blount County Farm Bureau and his commitment to Tennessee agriculture and Tennessee farmers.

These two are quite often seen about town, with COVID-19 altering their activities somewhat. Dennis said neither of them cooks so they frequent local restaurants that include Cracker Barrel, IHOP and TC’s Grill. Sterling said his favorite meals are steak and fish.

As he sat in the back seat of Dennis’ car for the 15-minute precautionary wait following his vaccine, Sterling said he wants others to be encouraged by his story and get the vaccine. It’s the only way for things to get back to normal and protect everyone, he said.

His health has remained good over the years, but macular degeneration has left him with little vision. Dennis is there by his side to help him navigate.

Shanna and Dennis said they are making chili to celebrate Sterling’s birthday and will come together on Sunday for the Super Bowl. Sterling had no predictions or preference of teams.

For him, it will be another good day to enjoy his family. In addition to his son, Dennis, Sterling has three grandchildren and one great-grandson.