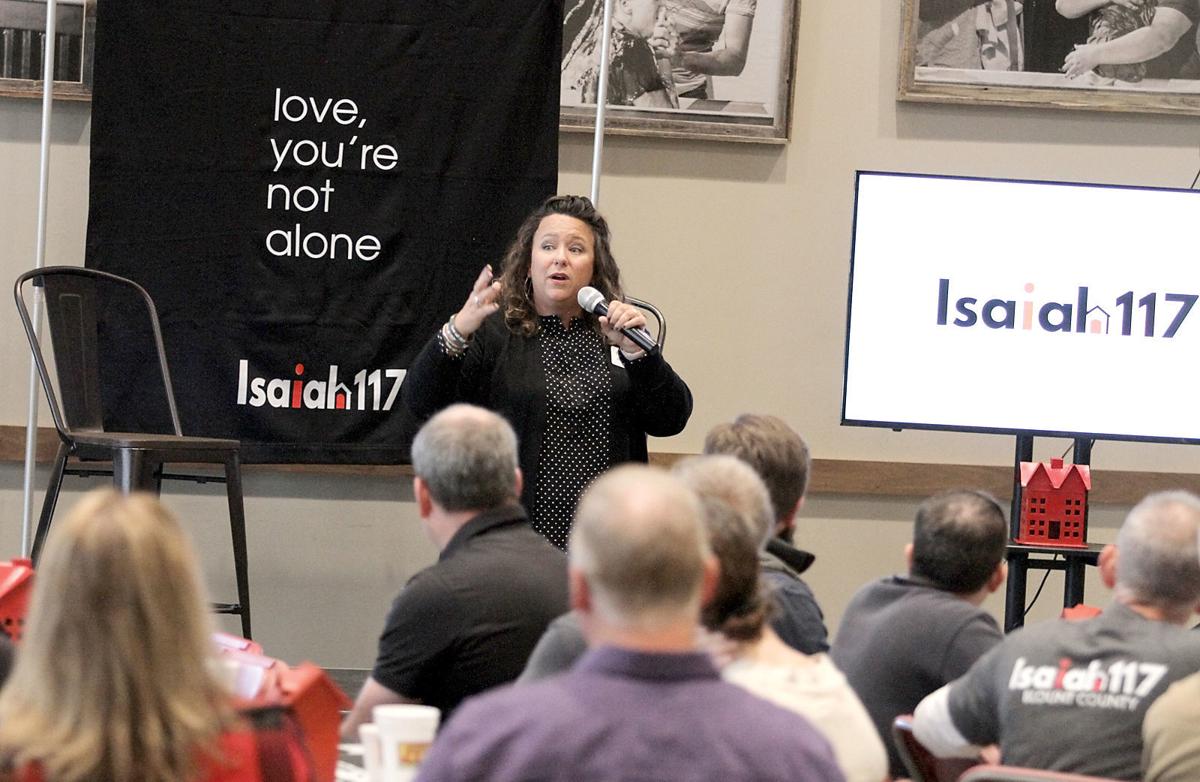 Founder Ronda Paulson speaks to pastors and visitors at Blount County Community Church about Isaiah 117 House. Fundraising efforts are getting underway here to start a house that will provide a temporary, safe place for children to go after being taken into state custody, before being placed in foster care. 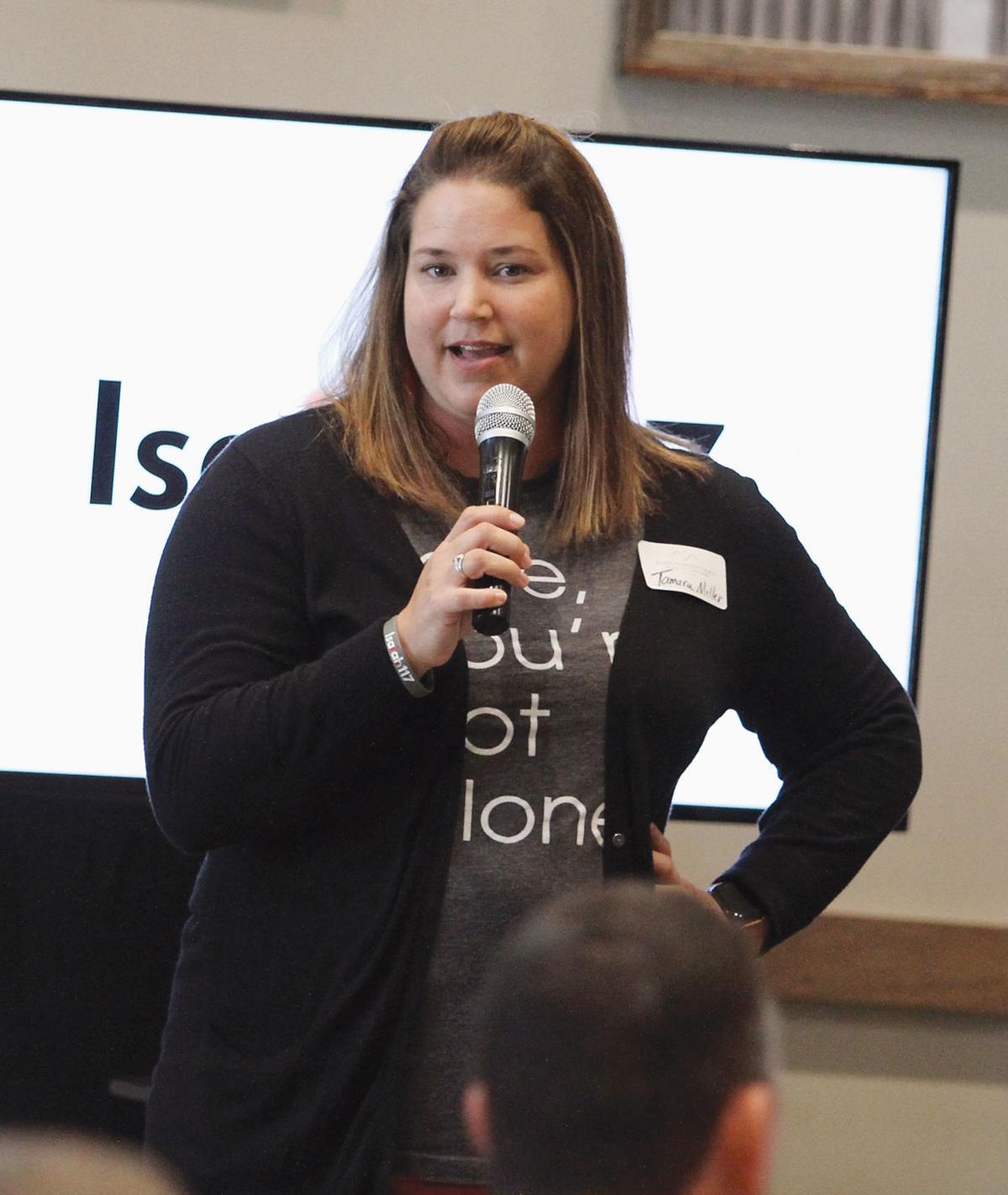 Tamara Miller talks about Isaiah 117 House. She is the expansion coordinator for Blount County. A kickoff luncheon is set for Dec. 5 in Maryville for this nonprofit’s local effort.

Founder Ronda Paulson speaks to pastors and visitors at Blount County Community Church about Isaiah 117 House. Fundraising efforts are getting underway here to start a house that will provide a temporary, safe place for children to go after being taken into state custody, before being placed in foster care.

Tamara Miller talks about Isaiah 117 House. She is the expansion coordinator for Blount County. A kickoff luncheon is set for Dec. 5 in Maryville for this nonprofit’s local effort.

When a child is removed from a home by the state Department of Children’s Services to await placement in foster care, where does he or she go?

Oftentimes it’s the DCS office, where they can wait for hours or days, sometimes sleeping on the floor of a small, windowless conference room.

Carter County resident Ronda Paulson admits she didn’t know. But now that she does, she is changing what can be a child’s worst day into one that demonstrates love and compassion.

Paulson is the founder of Isaiah 117 House, a nonprofit that is seeking to provide a home in several Tennessee counties that will serve as a safe place for children in state custody to wait, where their basic needs are met and where they can receive the care they need, such as bathing and a full meal.

This mother of four spoke to a crowd of local ministers Tuesday at Blount Community Church and announced her organization is now raising funds and seeking volunteers for an Isaiah 117 house here in this community.

“We are not asking you for anything today,” Paulson said. “We want to give you some lunch and tell you a story.”

For Paulson, the journey started back in 2014 when she was homesick and happened to be watching the national news. She saw hundreds of families in New York City with the children they had adopted. It was National Adoption Day.

Paulson admitted she had always felt like she would adopt one day; her husband, Corey, wasn’t convinced. But as she watched that broadcast she learned that 75% of those adoptions were made through the foster care system.

“I knew nothing about foster care,” Paulson said. “I didn’t know where the DCS office is located or what DCS stood for. I didn’t have any friends who had walked that journey.”

She decided to do some research and discovered parents wanting to adopt had to take PATH (Parents as Tender Healers) classes. And some were getting started right in her community.

“I did the only thing a God-loving, God-following patient woman could do,” Paulson told the crowd. “I called my husband at work and asked him if he would like to go on a date Thursday night. He said ‘I would love to.’”

The weekly classes were held on eight consecutive Thursday nights in Carter County. In the seventh week, it was held at the local DCS office.

“Those offices are all the same,” she said. “There is a lobby and you get buzzed back. There are cubicles and outdated conference rooms. We were in one of those conference rooms, no windows and state-issued furniture with phones that still plug into the wall. The gentleman leading the class said, ‘When a child is removed from a home, they come here.’”

Paulson said she looked around the room and thought he was kidding. She asked him to explain.

“He said a little girl slept in this room last night.”

It was in that moment that Paulson said God spoke to her: “These are my children, what are you going to do?”

That was in 2014. On Nov. 5, 2015, the Paulson family got a call from DCS about a baby boy who needed placement. Paulson and her husband met DCS officials at the back door of their office and there they met a red-headed baby boy. He was dirty and needed a bath; his only possession was a diaper bag that Paulson was told to leave outside her house for 24 hours “to let the roaches crawl out.”

“This was my introduction to foster care,” this mom said.

This family already had two children of their own and began the process of blending a family. Paulson said the baby’s name is Isaiah, so she began reading the book in the Bible. Her heart bonded with Isaiah 1:17:

Learn to do right; seek justice. Defend the oppressed. Take up the cause of the fatherless; plead the case of the widow.

Now that Paulson was walking the foster care path, she saw the needs. She started working on creating a nonprofit that could come alongside DCS and create an environment where a child didn’t feel like he had done something wrong and felt alone, and where case workers would get an extra set of hands. Isaiah 117 was the name Paulson chose. Her first board meeting was on Feb. 26, 2017.

What she envisioned was a house, not a cubicle, stocked with personal care supplies, fluffy towels and blankets, toys and books, food and snacks. These children leave behind their personal belongings, Paulson pointed out.

In many cases, siblings are separated and don’t return to the school they once attended or see their friends.

Before Paulson started on this plan, she met with DCS officials to make sure they would support her effort. They said yes and fundraising began.

In those months leading up, children put up lemonade stands and raised $7,000.

She had a friend who designed a T-shirt for herself and board members. Paulson posted a photo on social media and 100 orders came in for a shirt that was initially only for these 12 people.

They bought a house in Carter County and then had to basically gut it and deal with foundation issues. A local company did the work for free.

Today, there have been 142 children who have walked through that door.

“They come so tired and so dirty and so lonely,” Paulson said. “We want to provide them with simple acts of kindness on their worst day.”

From there, expansion has taken off. Other counties have expressed a desire for an Isaiah 117 house. Those communities include Washington, Greene County and Sullivan counties. Blount, Knox and Sevier counties are next.

There has been $20,000 already raised here, Paulson said. On Dec. 5, a kickoff luncheon will be held at Maryville First Baptist Church. Anyone who wants to learn more, help with fundraising or become a volunteer is invited to attend the free luncheon.

Volunteers must be finger printed, go through a background check and attend training.

Paulson’s foster care journey didn’t end with Isaiah. She got a call from DCS in March 2017, telling her Isaiah had a 6-week-old brother, Eli. They immediately took him into their home and on Nov. 17, 2019, they officially became members of the Paulson family, joining Ronda, Corey, Sophie and Mac.

“If you would have told me in 2014 that this is what I would be doing, I would have laughed because God is funny,” Paulson told the crowd at the start of her presentation. She was a dance and cheer coach and adjunct professor at Milligan College.

“We learned so much about a broken system,” she said. “Every part of me wanted to walk away, but once you know, you can’t not know.”

The T-shirts for Isaiah 117 say “love, you are not alone.” That’s the message and why Paulson said Isaiah 117 House was created. It’s time to get started in Blount County, she said.

Isaiah 117 will host a kickoff luncheon at noon Thursday, Dec. 5, at Maryville First Baptist Church, 202 W. Lamar Alexander Parkway, across from the Blount County Courthouse. Ronda Paulson, founder, will speak. The public is invited. Plans are to start an Isaiah 117 house in Blount County. Funds are being raised.