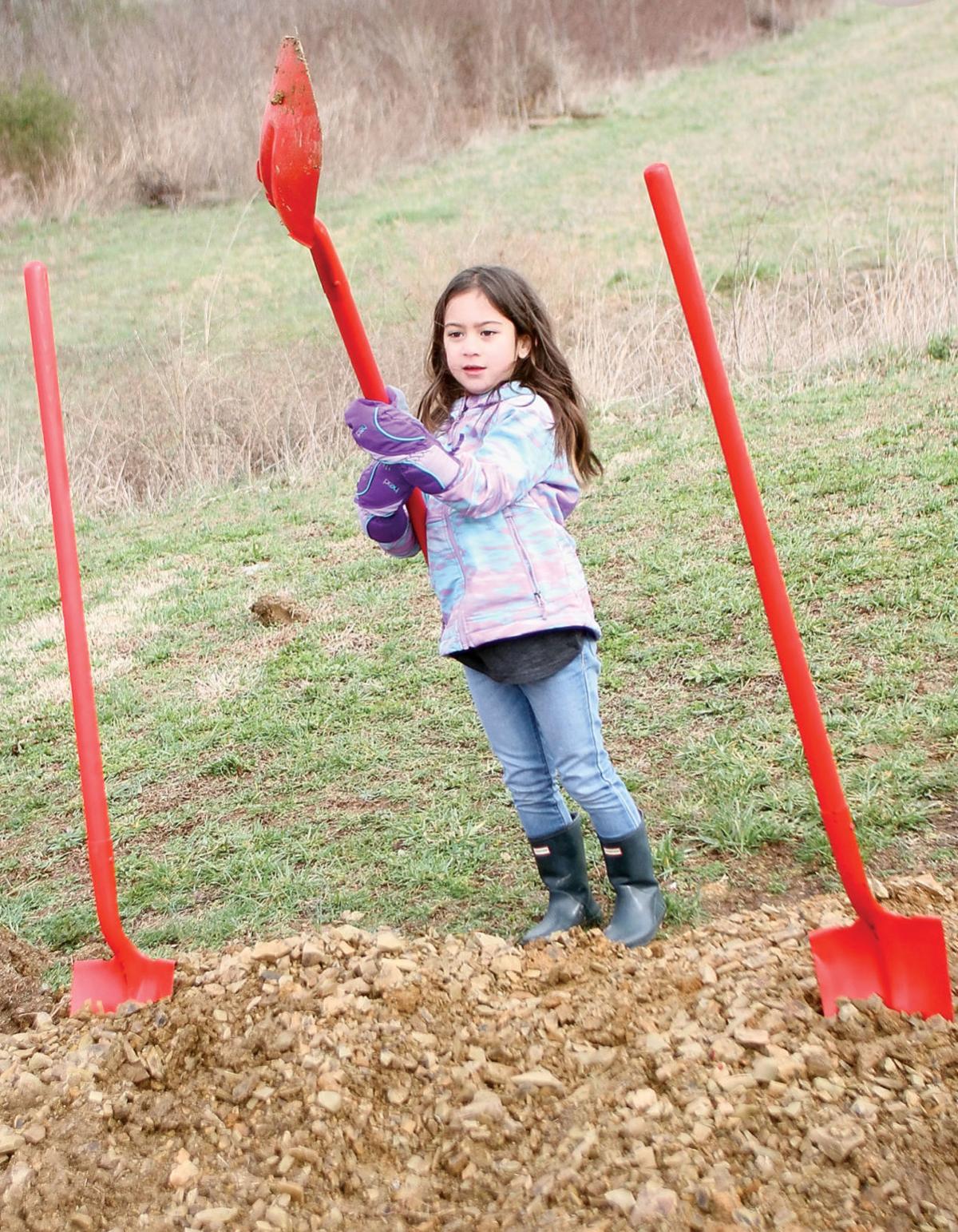 Tatum Richmond, 6, helps with the groundbreaking ceremony for the Isaiah 117 House to be built in Blount County. The Prospect Elementary student donated money from her birthday party for the house. 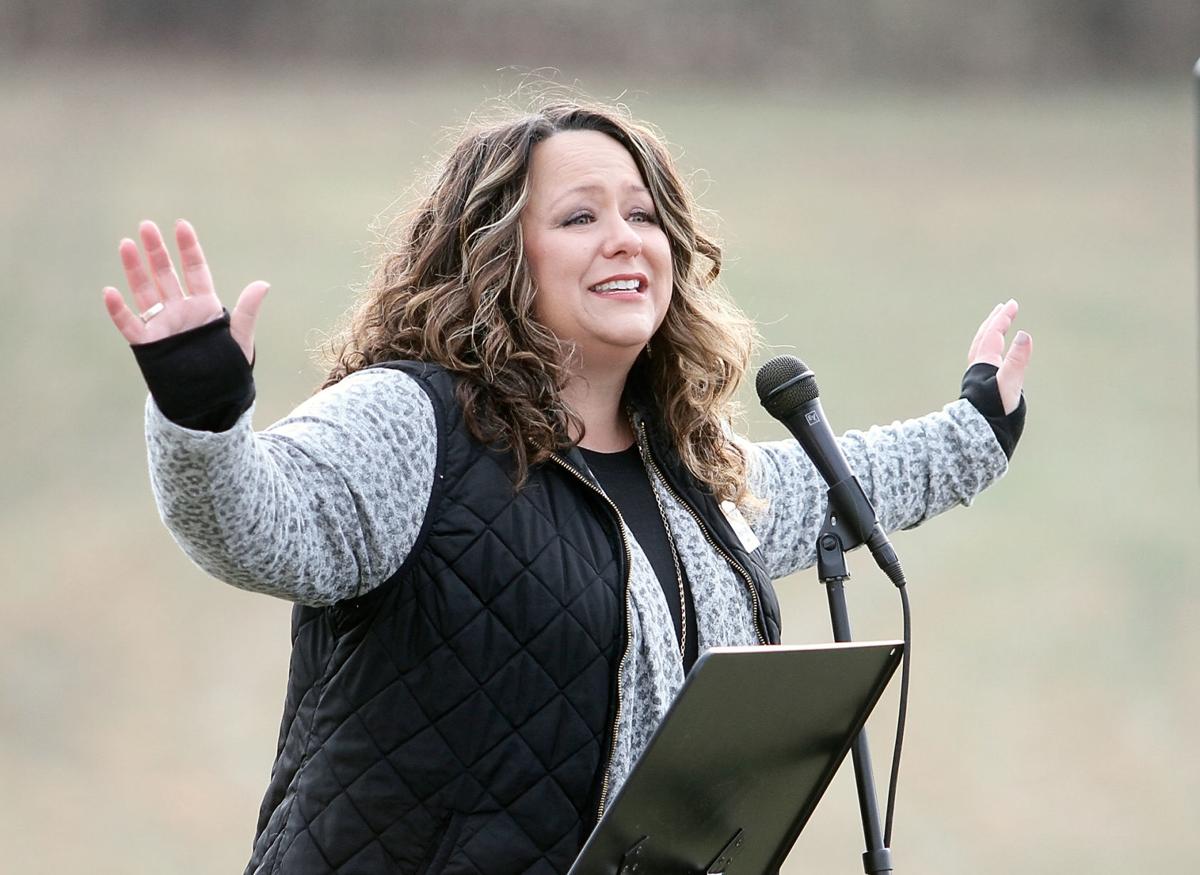 Isaiah 117 founder Ronda Paulson celebrates as she speaks during the groundbreaking for the new Isaiah 117 house to be built on land donated by Blount Community Church. 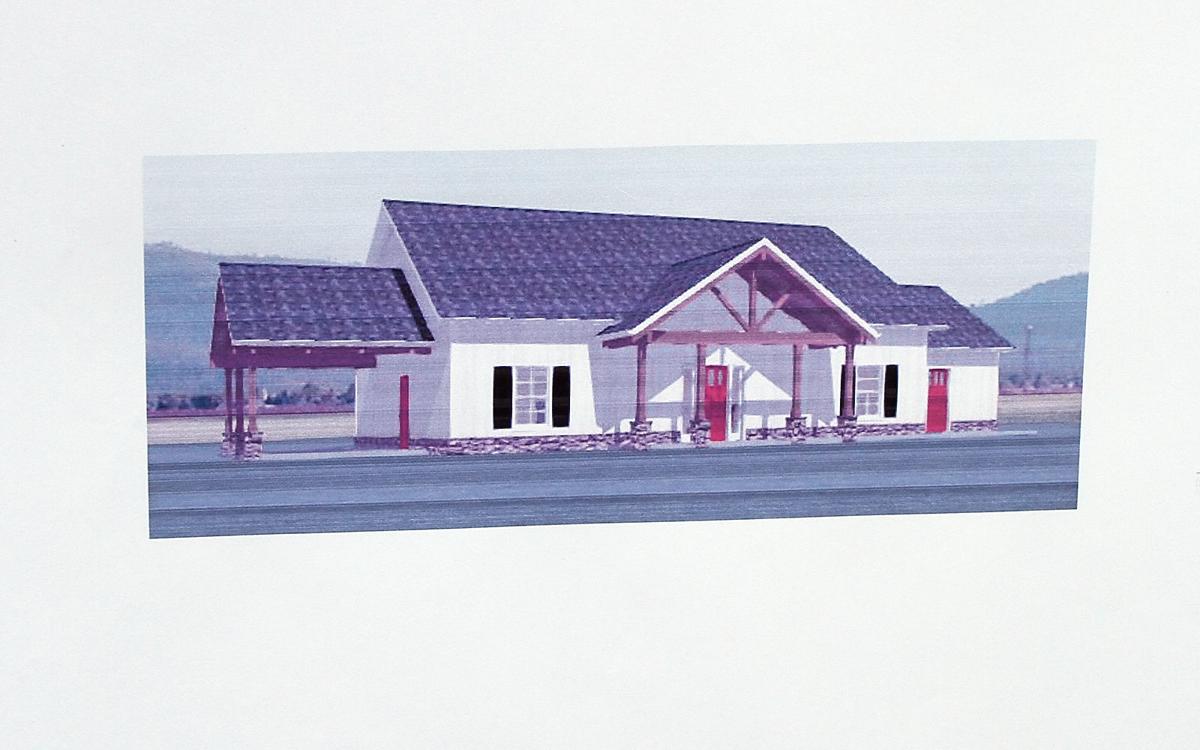 A rendering of the new Isaiah 117 house in Maryville was on display at the groundbreaking for the new house Friday. 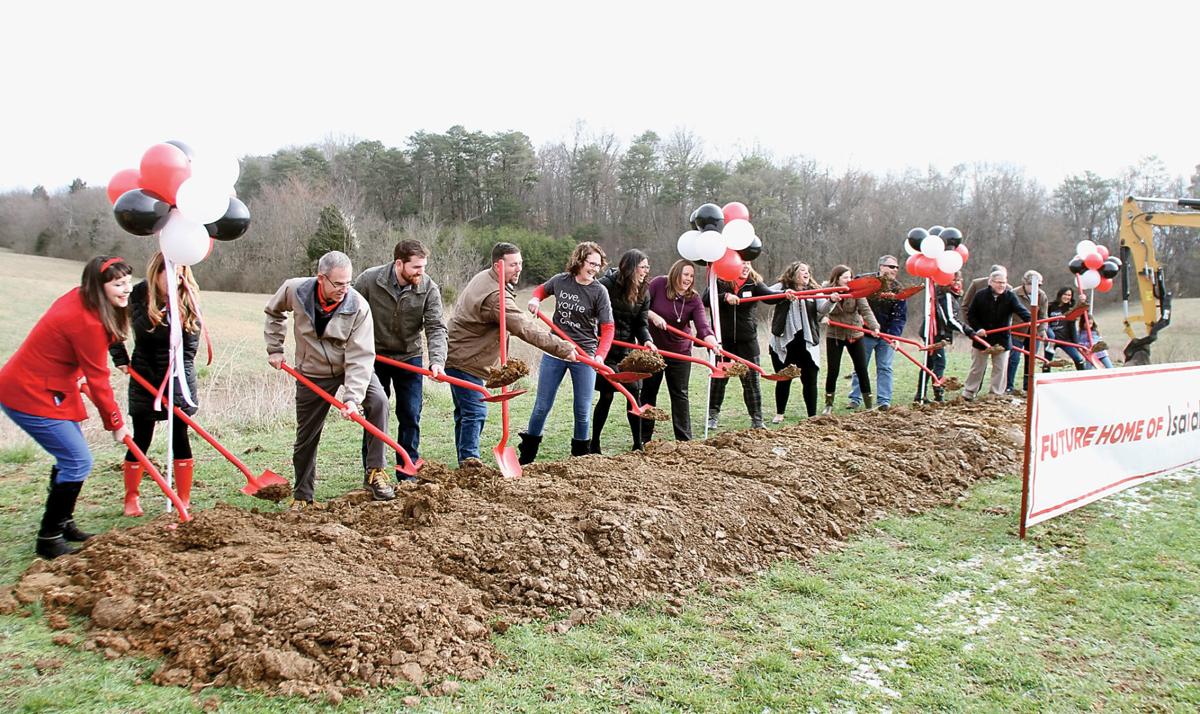 The Isaiah 117 house in Maryville holds its groundbreaking Friday on land donated by Blount Community Church. 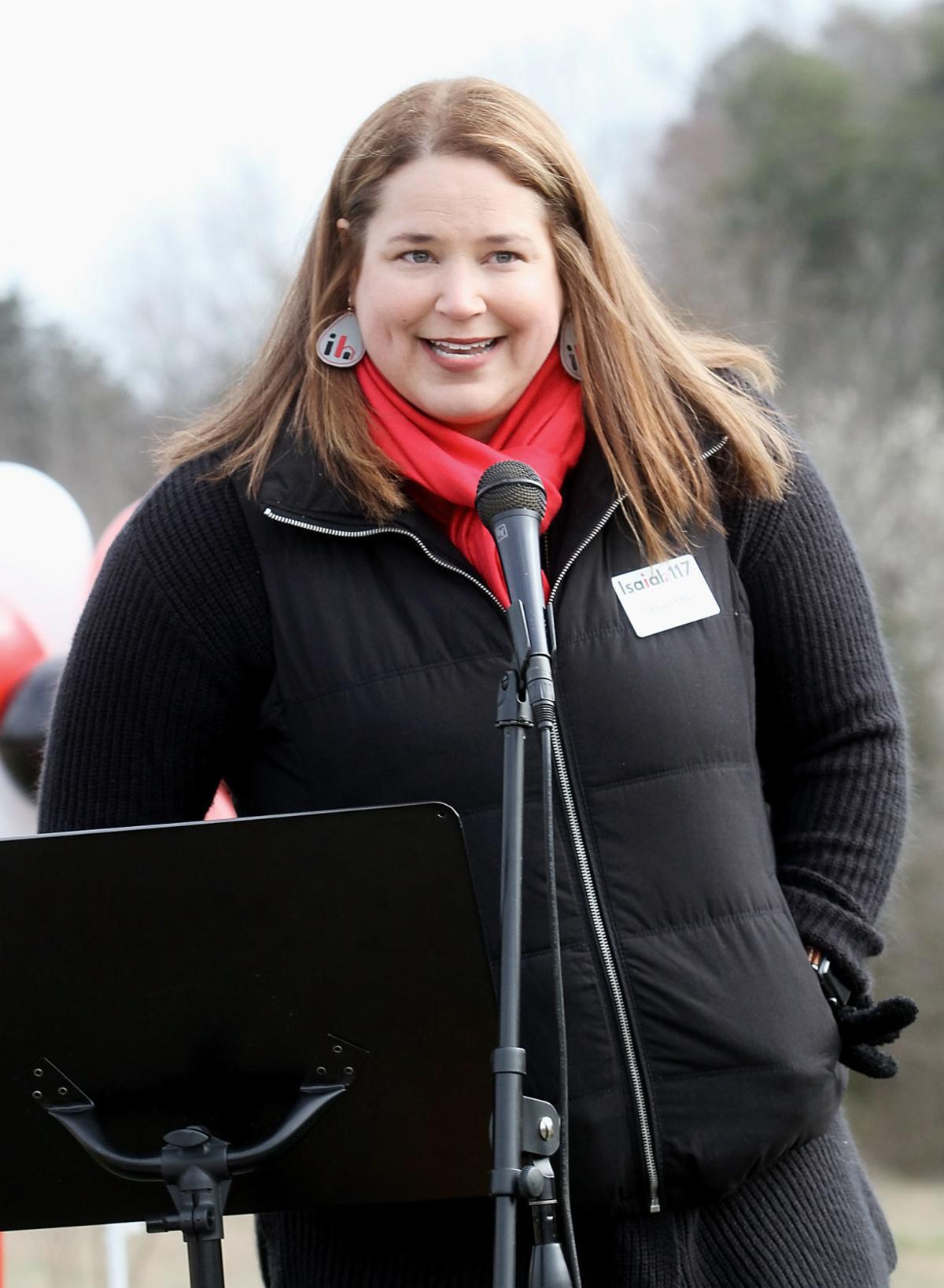 Tamara Miller speaks before the groundbreaking for the new Isaiah 117 house. She is coordinator for Blount County. 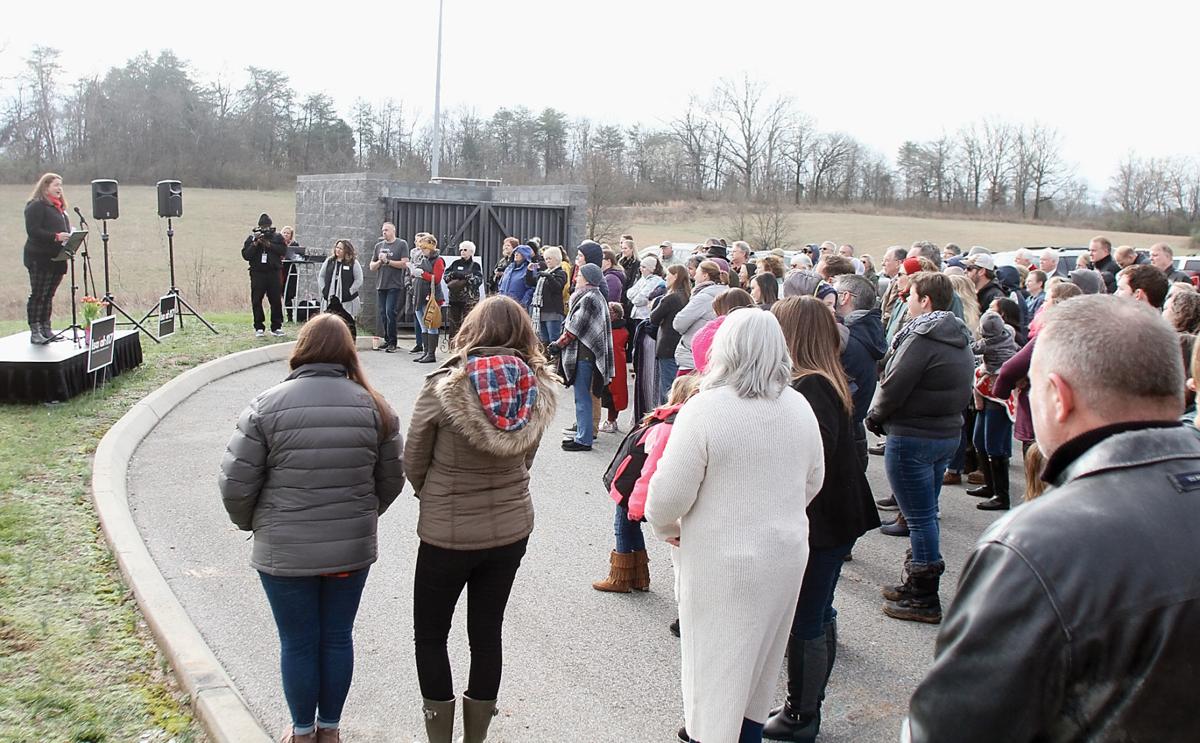 A crowd gathers in the cold weather Friday morning for the groundbreaking of the new Isaiah 117 house.

Tatum Richmond, 6, helps with the groundbreaking ceremony for the Isaiah 117 House to be built in Blount County. The Prospect Elementary student donated money from her birthday party for the house.

Isaiah 117 founder Ronda Paulson celebrates as she speaks during the groundbreaking for the new Isaiah 117 house to be built on land donated by Blount Community Church.

A rendering of the new Isaiah 117 house in Maryville was on display at the groundbreaking for the new house Friday.

The Isaiah 117 house in Maryville holds its groundbreaking Friday on land donated by Blount Community Church.

Tamara Miller speaks before the groundbreaking for the new Isaiah 117 house. She is coordinator for Blount County.

A crowd gathers in the cold weather Friday morning for the groundbreaking of the new Isaiah 117 house.

The house will serve as a safe place to land for children taken into state custody who are waiting for placement with a foster family. Instead of waiting for hours in an office space with Department of Children’s Services, the children will have a place to go where they can enjoy a hot meal, warm shower and comfortable surroundings.

Isaiah 117 is the idea of founder Ronda Paulson, who started on her own adoption journey with the foster care system back in 2015. By 2017, she had the vision for Isaiah 117 and now five communities in East Tennessee have houses that are either already open or will be soon.

“On a day like this, my heart is so overwhelmed with gratitude,” Paulson said to the crowd gathered Friday. She said volunteers have stepped up, businesses have donated supplies and expertise.

“This ministry is truly built on the belief that if God’s people know there is a need, they will step up,” she said. “This is what we do. We go into a community and say, ‘Did you know about this day in a child’s life?’ This is what happens when God’s people find out about a need. That’s why we are here.”

Also on hand for the ceremony was Maryville Mayor Tom Taylor. He said the city is thrilled that Isaiah 117 is in this community.

“I come from a family and culture of social workers,” he said. “My mother-in-law was a social worker and my wife in the early years of our marriage was a social worker. I’ve had many friends with DHS and DCS. I know in the years they have seen children pass through the program, they have realized we have a gap we needed to fill. Until Ronda Paulson did something about it in 2015, nothing really happened.”

Wendy Forster, regional administrator for Smoky Mountain DCS stood before the crowd and expressed her appreciation for this program and what it will do for the children coming into state custody. She said the compassion shown here in Blount County has been phenomenal.

“Nelson Mandela said there is no keener revelation about a society’s soul than in the way it treats its children,” she said. “It has been a joy to watch the journey to get us to this point to break ground.”

Paulson is from Carter County and that is where the first Isaiah 117 house was open. Others are now in Greene, Washington, Sullivan and Bradley counties. Knox County is also in the planning stages.

An expansion committee first began meeting here in June 2019. Paulson made her first communitywide presentation to Blount County in early November 2019 to introduce faith leaders to the organization. She formed the nonprofit after beginning the process of adopting a child from the foster care program back in 2015 in Carter County. She learned that children removed from their homes often have to wait hours in the Department of Children’s Services office for placement with a family. They have no place to even take a shower.

The comforts of home

The idea for Isaiah 117 was created out of that need. Paulson has been initiating fundraising in many East Tennessee counties to build Isaiah 117 Houses as temporary respite for the foster children. The houses are equipped with kitchens, bathrooms with showers and are stocked with essentials like comfortable furniture, towels, blankets, toys, personal care products, food and clothes. Each house will also have an office for a case worker from DCS.

The name Isaiah 117 comes from the verse in the Bible, Isaiah 1:17 which says “Learn to do right; seek justice. Defend the oppressed. Take up the cause of the fatherless; plead the case of the widow.”

Blount County came together after that major announcement in November about seeking an Isaiah 117 site here. Blount Community Church stepped forward to offer a piece of ground.

Later, in December, a meeting open to the community was held at Maryville First Baptist. When the day was over, $64,000 had been raised, according to Tamara Miller, expansion coordinator in Blount County.

Money has come from students like Madison Cox, a senior at Maryville High School, who raised more than $8,000. Isaiah 117 has also sold T-shirts.

It was in January 2017 that Paulson began the steps to create the nonprofit. The board had its first meeting in February 2017. Isaiah 117 Houses have been completed in Carter, Greene County and Washington County. Others are in the construction phase in Sullivan County and now Blount. Houses are also being fundraised for in Cocke, Monroe, Bradley, Rutherford and Coffee-Franklin-Grundy counties.

The contractor for the Isaiah 117 House in Blount County is Lamon & McDaniel Builders. Close to three-fourths of the funding has already been donated.

Tamara Miller serves as the expansion coordinator for Blount County. She said Feb. 14 seemed like the perfect day to hold a groundbreaking.

Stepping out on faith

Miller and Paulson have been friends for many years, attending college together. It was Miller who approached her friend and told Paulson she felt led to start an Isaiah 117 House in Blount County.

Paulson told her, “Let’s do this” and they have been working side by side ever since.

“We started meeting in June,” Miller said. “In that amount of time, we have attended approximately 11 festivals and craft fairs, shared with eight churches and small groups. We have spoken to four civic groiups and held three lunches. Our biggest was over 350 people and we raised $64,000.”

Jeff Fuchs, pastor of Blount Community Church, stepped up to the podium to bless the land and offer prayers for this community and the work that lies ahead.

He said Isaiah 117 is about living out God’s command to his people, to love one another. “To love those who are marginalized and can’t help themselves,” the pastor said.

Actual groundbreaking will get underway in a few weeks, Miller said.

Paulson admitted she had no idea how this program to provide care for children in foster care would look like initially.

“I felt like we would buy an old house and put lipstick on a pig,” she said. “That is what I thought we would do. God was like, love her. Bless her heart. I need to send her some contractors. And he has.”