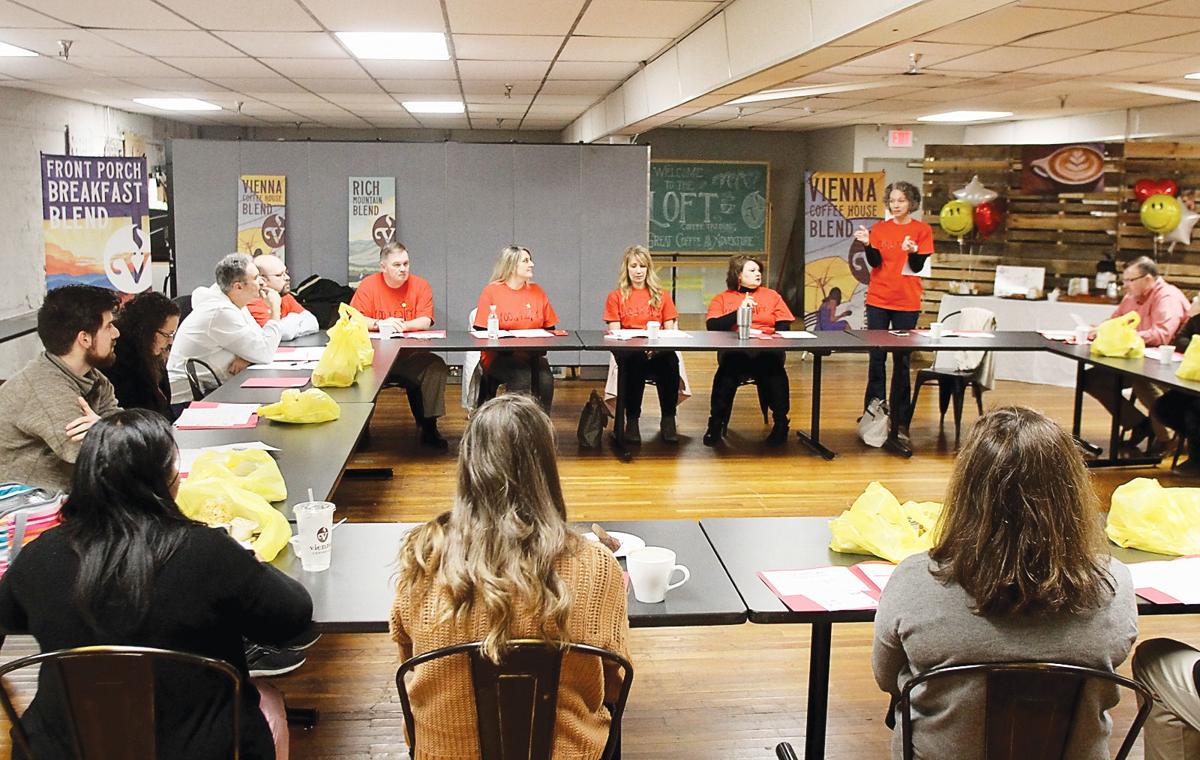 Christine Clanton, along with other members of the Leadership Blount class of 2020, explain the Food Fairy program. It will provide food for students in need of meals during the summer when school is out. Six schools have been selected as pilot locations. 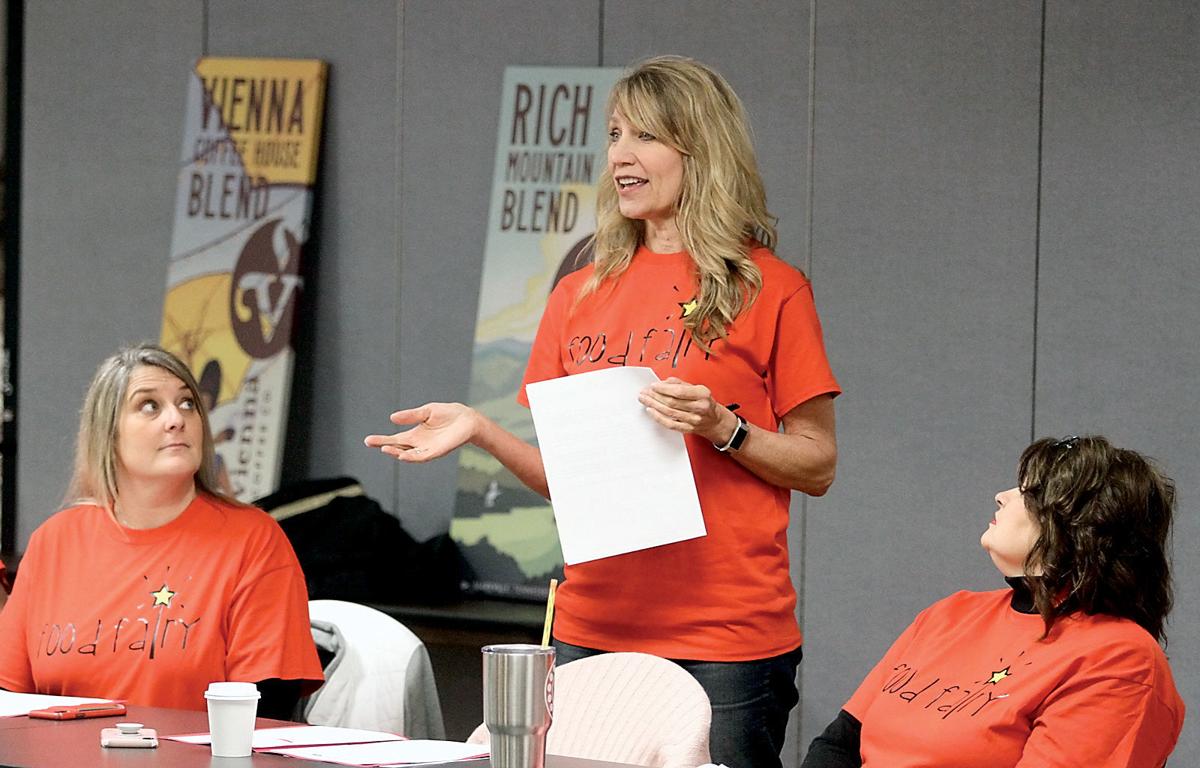 Denise Johns explains the Food Fairy program as Donna Russell (left) and Missy Johnson listen during a meeting to kick off the program by part of this year’s Leadership Blount class. 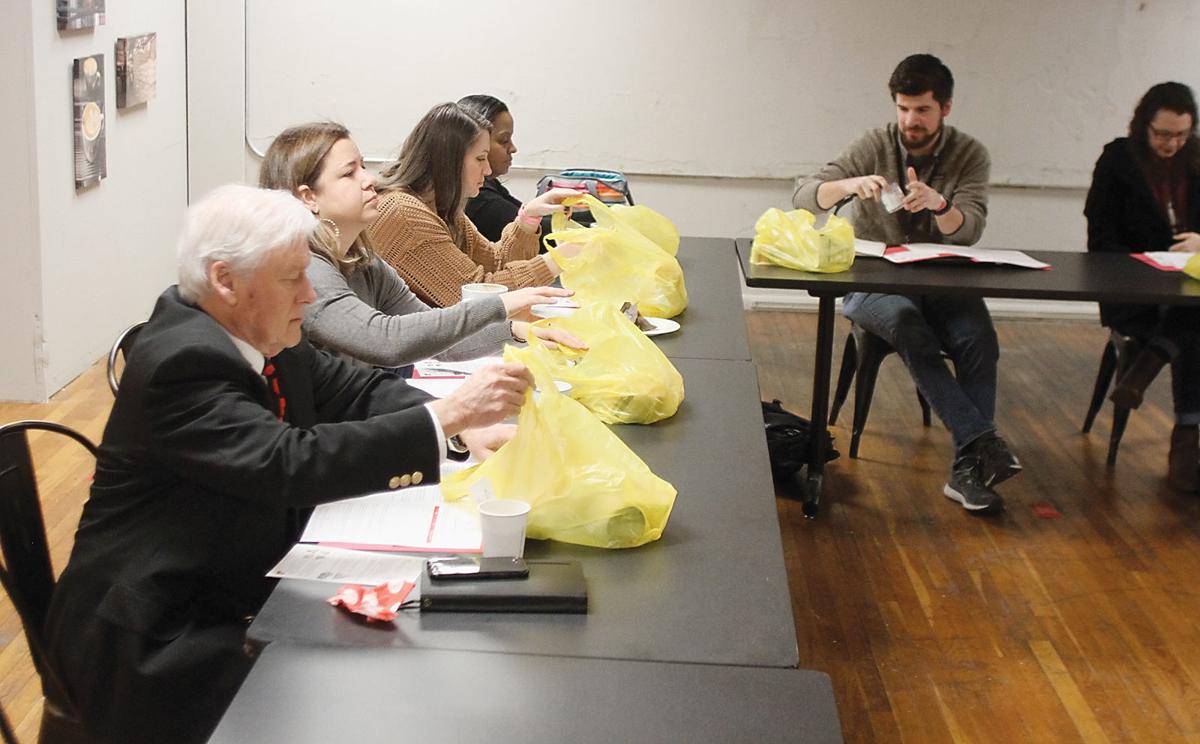 Representatives from churches and schools check a sample of food items to be delivered to students in the summer by the Food Fairy. 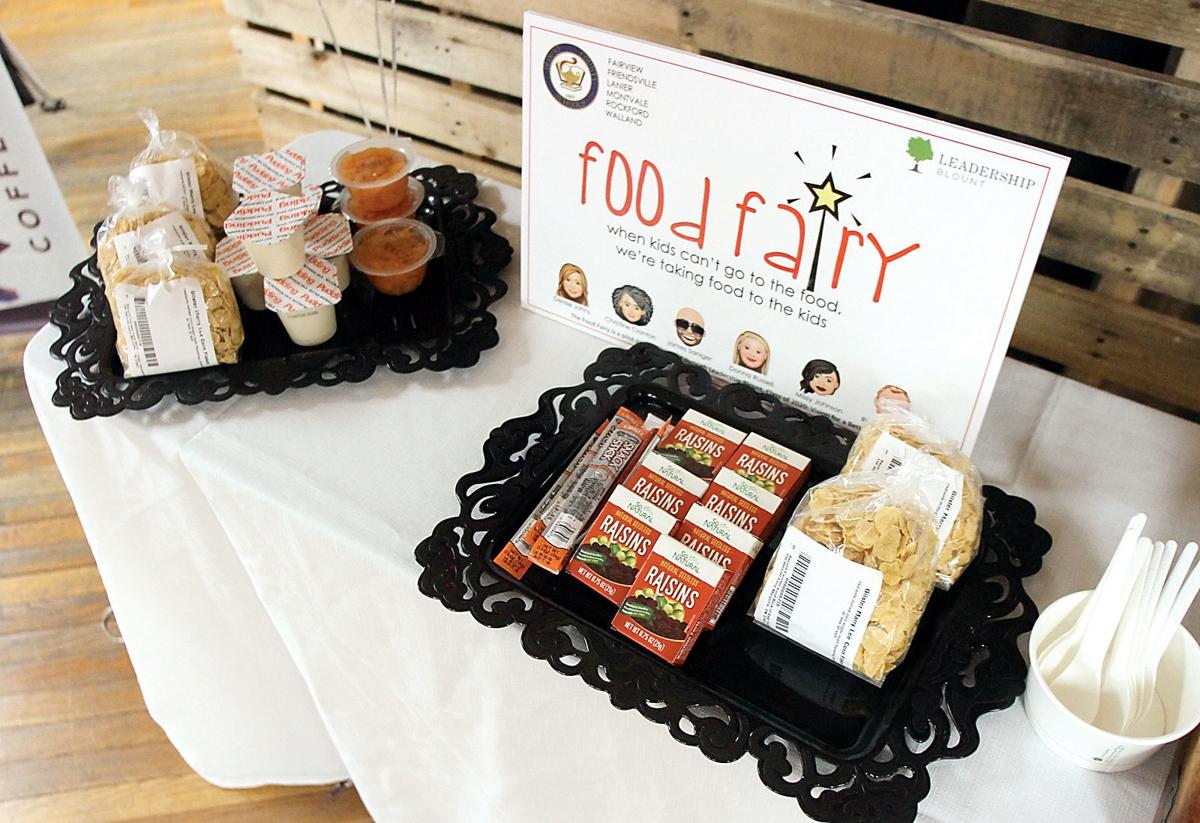 A sample of the food that would be delivered to students by the Food Fairy program during summer months when school is out of session. The food will be provided by Second Harvest Food Bank.

Christine Clanton, along with other members of the Leadership Blount class of 2020, explain the Food Fairy program. It will provide food for students in need of meals during the summer when school is out. Six schools have been selected as pilot locations.

Denise Johns explains the Food Fairy program as Donna Russell (left) and Missy Johnson listen during a meeting to kick off the program by part of this year’s Leadership Blount class.

Representatives from churches and schools check a sample of food items to be delivered to students in the summer by the Food Fairy.

A sample of the food that would be delivered to students by the Food Fairy program during summer months when school is out of session. The food will be provided by Second Harvest Food Bank.

It wasn’t hard for members of Leadership Blount Class of 2020 to come up with a name for its pilot program to feed Blount County’s hungry children.

As Donna Russell explained it, she had an encounter with a student at Montvale Elementary, where she serves as principal. The little girl came to school one day for a summer reading program and couldn’t wait to share an amazing story with Russell.

“You won’t believe this,” Russell said the student told her. “The food fairies came to my house last night.”

Russell asked the student what she was talking about. The girl said someone had left food on her porch the previous day. “They came like the tooth fairy and we had fresh fruit.”

Russell knew what had happened. A local church, Maryville First United Methodist, had partnered with Montvale Elementary to provide a bag of food to the little girl each week during the summer. Second Harvest Food Bank provided the food and the church made the deliveries. Several other families were also enrolled.

Russell and her LB class were interested in using that model for their own summer feeding program to include more schools. “I told them I have the perfect name,” Russell said.

Russell, along with fellow LB members like Missy Johnson, Denise Johns and Christine Clanton, made a presentation Friday morning for schools and churches who could partner in this Food Fairy program. They are targeting six Blount County schools to begin this summer — Fairview, Friendsville, Lanier, Walland, Rockford and Montvale elementary schools.

Johns is a member of Maryville First United Methodist. Her church has been a past participant of a summer feeding program when they and Broadway United Methodist began assisting Carpenters Campground UMC. About four years ago, Carpenters started delivering food to families in the Carpenters Elementary family. As the two other churches came on board to help, Porter and Montvale schools were added.

Johns, Johnson, Clanton and the others in this LB class decided their small project could take that idea and expand on it, as well as give it a name.

Second Harvest will make the food deliveries to the churches, Johnson said. It is then up to the churches to pack it into bags and get it delivered. Each church can decide how many children it will be able to help. Once permission slips are signed and returned to the schools by the families who are interested, the summer plan will get underway.

The LB class will graduate in May, even before the program has lift-off, but Johnson said everything will be put into place to ensure its longeviy.

After this year, the goal will be to add more schools, she said. “We wanted to create a model that will outlive us as our class of Leadership Blount moves on,” she said.

They are giving the necessary bags with stickers that say “Food Fairy” on them. Contacts at each school will be established to make the flow easier from year to year.

Members of the faith community like Scott Kidd of First Baptist Friendsville and Chris Cupp of Central Point Baptist, were in attendance Friday to hear the presentation. They asked questions related to storing the food and if church materials could be placed inside the food bags.

The pallets take up little space, Clanton pointed out. They are delivered twice during the summer and must be kept off the ground.

Information pertaining to Bible schools and other related church information can be placed with the food, these organizers said.

Blount County Schools does administer a summer feeding program through East Tennessee Human Resources Agency, said Karen Helton, BCS nutrition coordinator. It is held at a couple of sites during the weeks school is out for the summer. Mary Blount, Eagleton and Heritage High have been former locations.

With that program, students must come to the sites to receive a meal. Helton said it will be a few more weeks before locations will be chosen.

She did provide the percentages of families at the six Food Fairy sites who qualify for free or reduced lunch. At Fairview, it’s 51%, and at Friendsville, that number is 50%. Walland’s is higher, at 59%, and at Montvale, 56%.

Two of the schools, Lanier and Rockford, are under the Community Eligibility Program, which means all students can eat both breakfast and lunch at no cost.

Food Fairy deliveries are to start the week of May 25 and conclude July 26. The eight items to be provided by Second Harvest will include two dairy, two proteins, two grains and two fruits. None requires refrigeration. Second Harvest does this free of charge to the schools and churches. For a small fee, the food bank will also provide fresh fruit.

All ages can play a role

Johns highly suggested that churches who get involved make sure to include their kids. They can help pack and make deliveries.

“The smiles our kids get to see by helping out are indescribable,” Johns said. “To know you can make a difference for those kids. There is a huge need. If we can’t provide food for kids, I don’t know what we can do.”

Kidd said he will go back to his church and present the idea of teaming up with Friendsville Elementary.

“We are right next door to them,” he said. “We have a great relationship.”

Attendees were given a timeline to follow so they will be on track to launch in May. Clanton said talks can continue between churches who want to sign on and the schools they seek to help.

“We obviously have a passion for this and we want it to be successful and to continue past just one summer,” she said. “Getting more of the community involved is what it’s going to take to make this succeed. The school and the churches who partner get to decide how this looks. It can be a small project or a giant one. You get to determine that.”