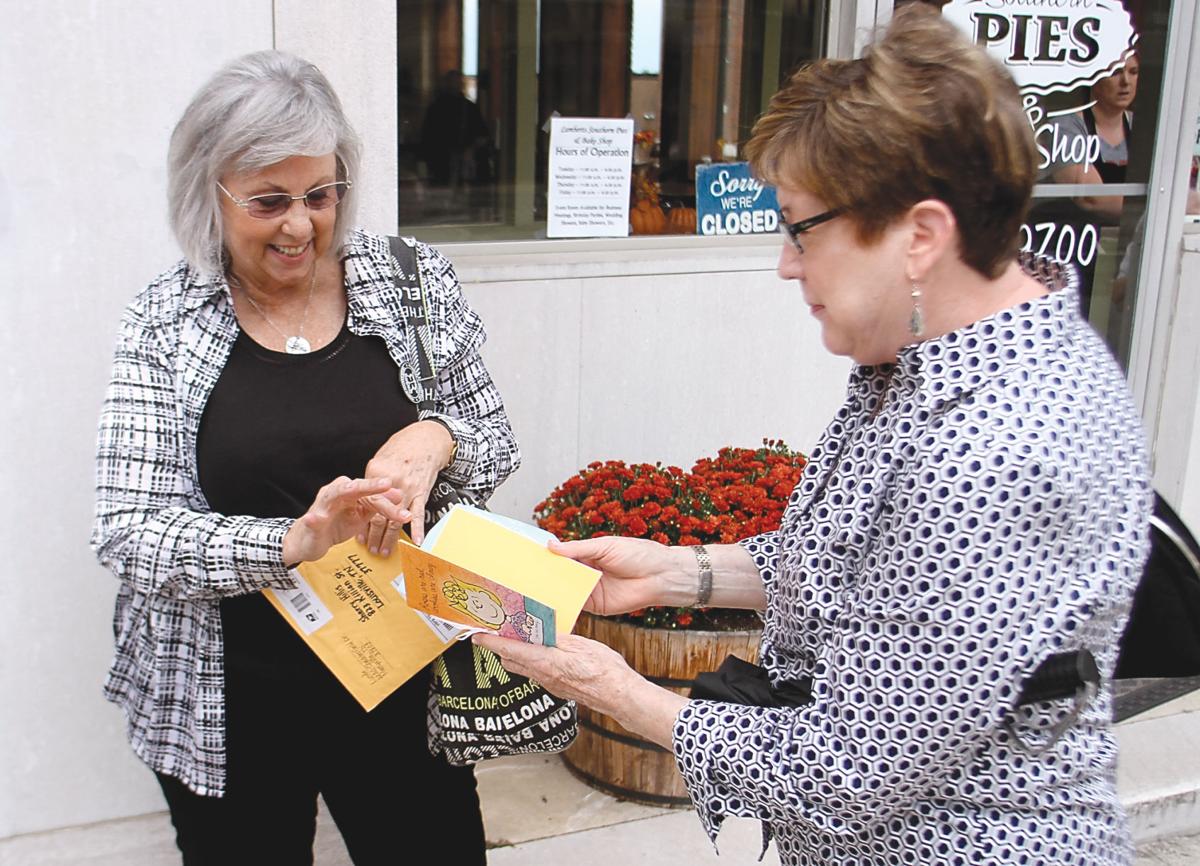 Sherry Hillis gives Patsy Lunde the birthday card the two have been exchanging for 20 years. Lunde added pages to the card so that each time the card is exchanged each can write a message to the other. 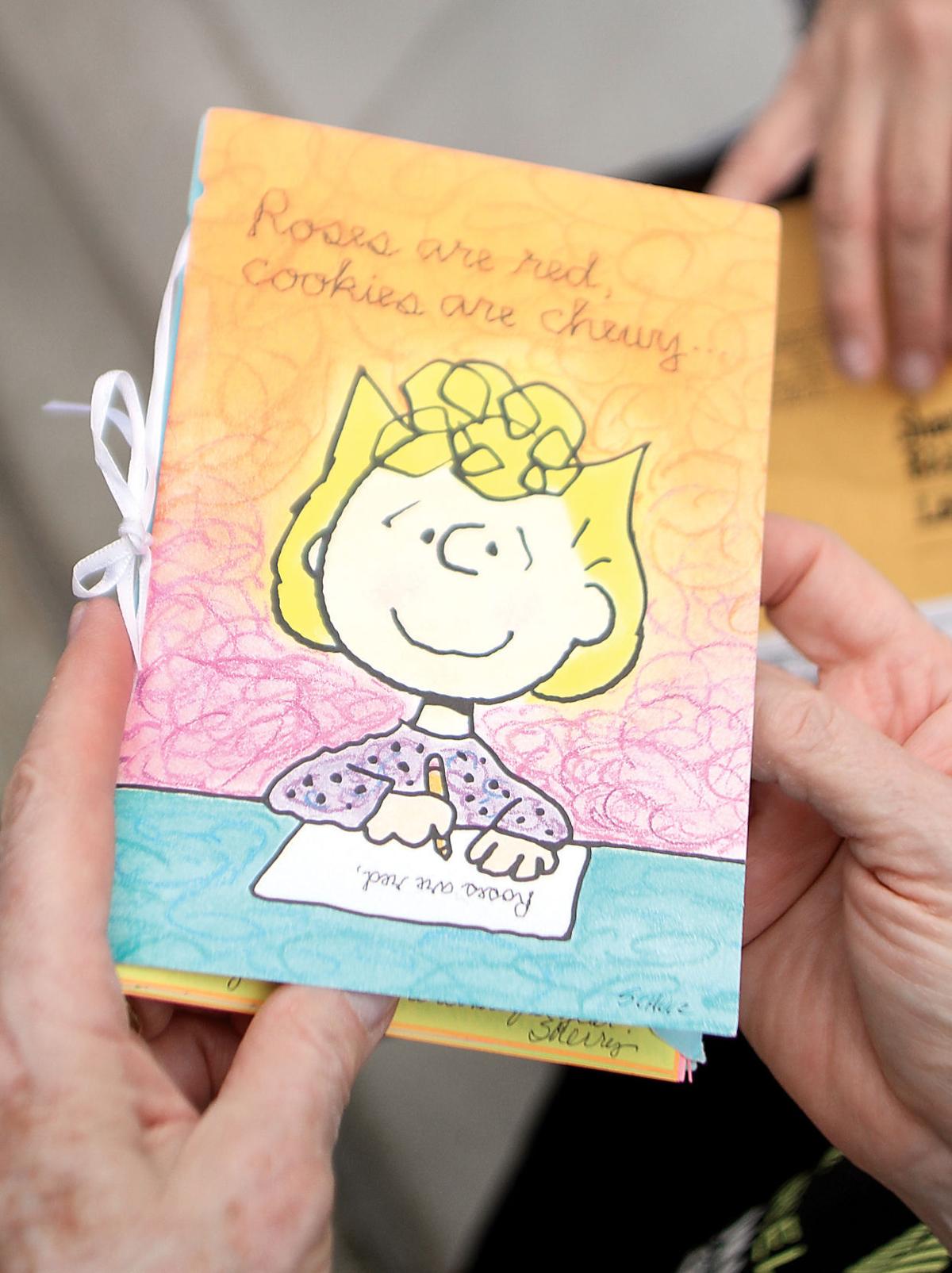 Patsy Lunde holds the birthday card she and Sherry Hillis have been exchanging for 20 years. It has held up very well. 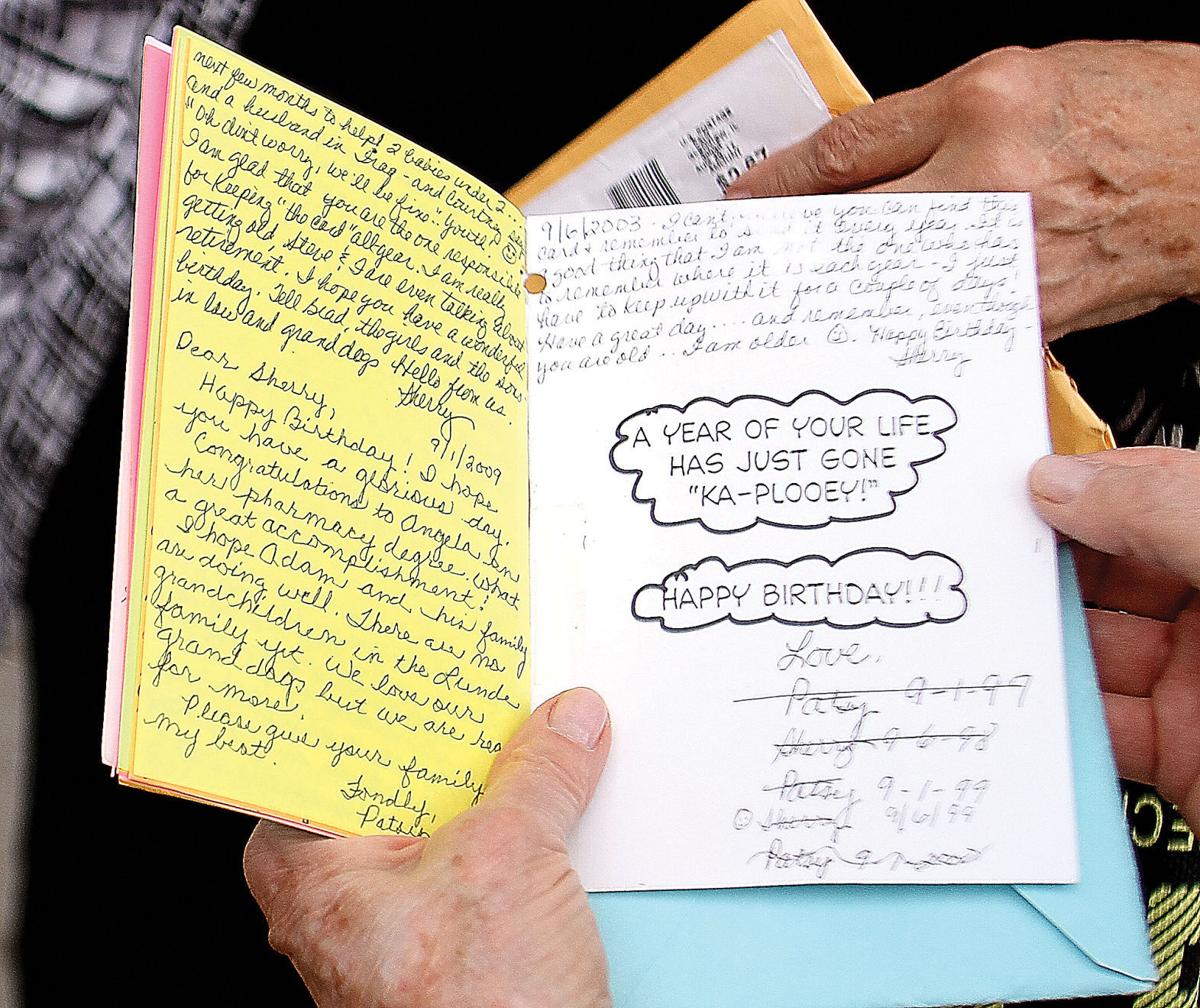 Patsy Lunde looks at the birthday card she and Sherry Hillis have been exchanging for 20 years. There are lots of memories recorded here.

Sherry Hillis gives Patsy Lunde the birthday card the two have been exchanging for 20 years. Lunde added pages to the card so that each time the card is exchanged each can write a message to the other.

Patsy Lunde holds the birthday card she and Sherry Hillis have been exchanging for 20 years. It has held up very well.

Patsy Lunde looks at the birthday card she and Sherry Hillis have been exchanging for 20 years. There are lots of memories recorded here.

It’s Sally of cartoon Peanuts fame on front of the card with her curly blonde hair, writing out a birthday wish.

“Roses are red, cookies are chewy” it says underneath her picture. On the inside, “A Year of Your Life has just gone Ka-Plooey! Happy Birthday!!”

The cute card with the comical words has become a favorite of friends Sherry Hillis and Patsy Lunde. Not really because of whose photo is on the front or the catchy rhyme. It’s more about where this card’s been and what’s been written inside.

Twenty years ago, Lunde picked out this card to send to Hillis on her birthday, Sept. 1. A few days later, Hillis marked through her name and sent it back to Lunde for hers, Sept. 6.

And for the next 20 years, that same card has been in the mail, back and forth every September. They write birthday wishes, catch up on family matters and keep the card safe the other 11 months of the year. Hillis keeps it in her old roll-top desk for the few days she has it. Lunde has a card organizer so she doesn’t ever forget to retrieve it.

“Hallmark is losing money on us,” Lunde said.

These two were employed by Blount Memorial Hospital for years. Hillis worked in infection control and Lunde, in the lab. But, Hillis left in 2010 to take a job in Dalton, Ga. Lunde likewise moved on, working for Molecular Pathology in Maryville. She was also a member of the Maryville City Schools Board of Education.

This friendship, however, goes back much further than that. Hillis has a son and daughter while Lunde has two daughters. The girls swam in high school.

The birthday card chronicles the lives of these two families. How, one might wonder, do two women write in the same card for 20 years without running out of space?

That’s easy. They add pages. That’s what Lunde did so they could carry on.

This was birthday week for the pair. Because they decided to meet for lunch in Maryville, Hillis hand-delivered the card to Lunde. She’s done that more than once. Usually because she waits till the last minute, she confessed.

On some birthdays past, one or the other was out of town or out of the country. Hillis was in Barcelona, Spain last year, while Lunde was in Chicago.

No excuse not to pass on the card. Lunde said she took the card with her to Chicago so she could send it out at the exact right time. The friends’ husbands have even gotten involved, reminding them when the birthdays are near.

“We just started out signing our names,” Lunde said. But when she left BMH in 2001, they didn’t see each other as often so more catching up was done in the card.

“She is the one who has really done all the work,” Hillis said. Lunde has added the necessary extra pages and is the one who keeps it the longest — from her own birthday on Sept. 6 until Hillis’ rolls around again on Sept. 1 the next year.

These two are now grandmothers. Both have three grandchildren. Both are also retired, but Hillis does some work for Vanderbilt Medical Center on antibiotic resistance. She travels to the Tri-Cities for her work. Her daughter lives close by so it works out nicely.

There is no anticipation about the card’s cover or its goofy saying as they open it each year. But there are words of encouragement during a tough time, a funny joke they share or an update on family that makes them want to open it immediately. They both go back and read the entries that really do serve as a chronicle of their lives.

It’s just one card, so it doesn’t fill up boxes or get stored under the bed. And because of its history, there is no threat of it getting thrown out.

“I just have to remember to send it,” Lunde said. “It is getting a little scary because we are getting older.”

Laughter, tears, old jokes and new discoveries are all part of this journey that began when one friend reached out to another.