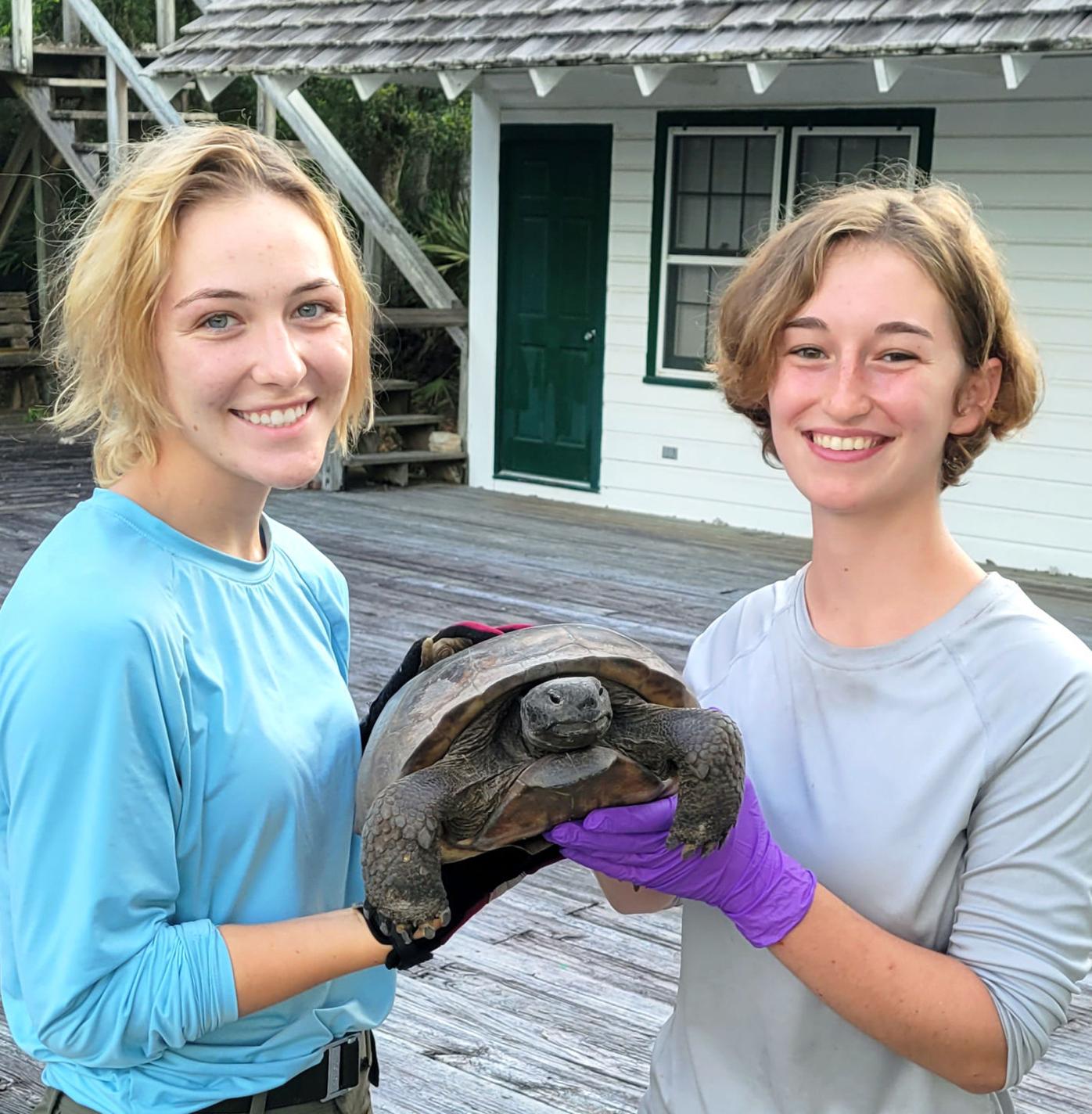 Rebecca Roberson (left) and Samantha Stacey hold a successfully captured gopher tortoise in preparation for measurements and the attachment of a GPS (global positioning system) transmitter. 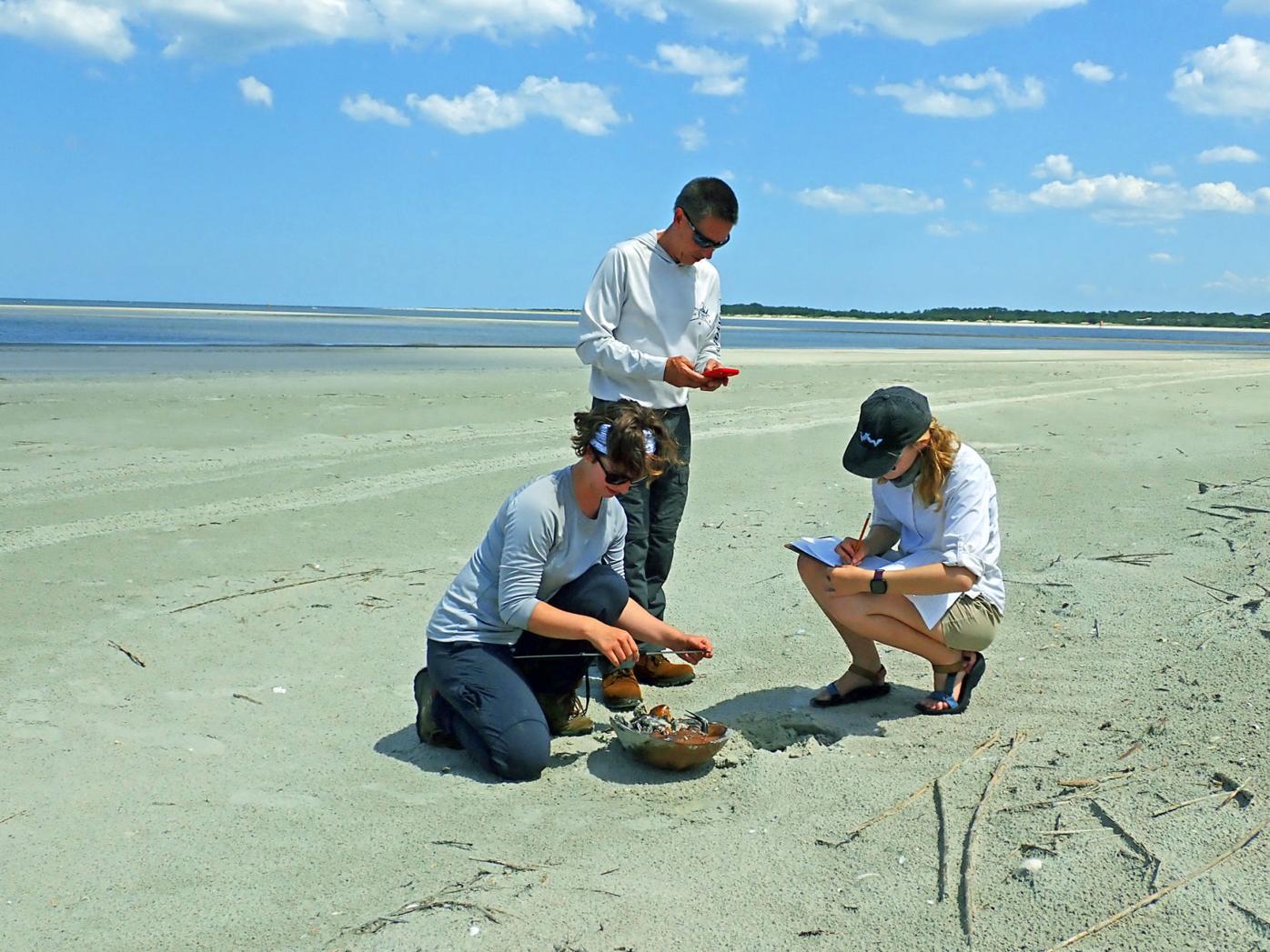 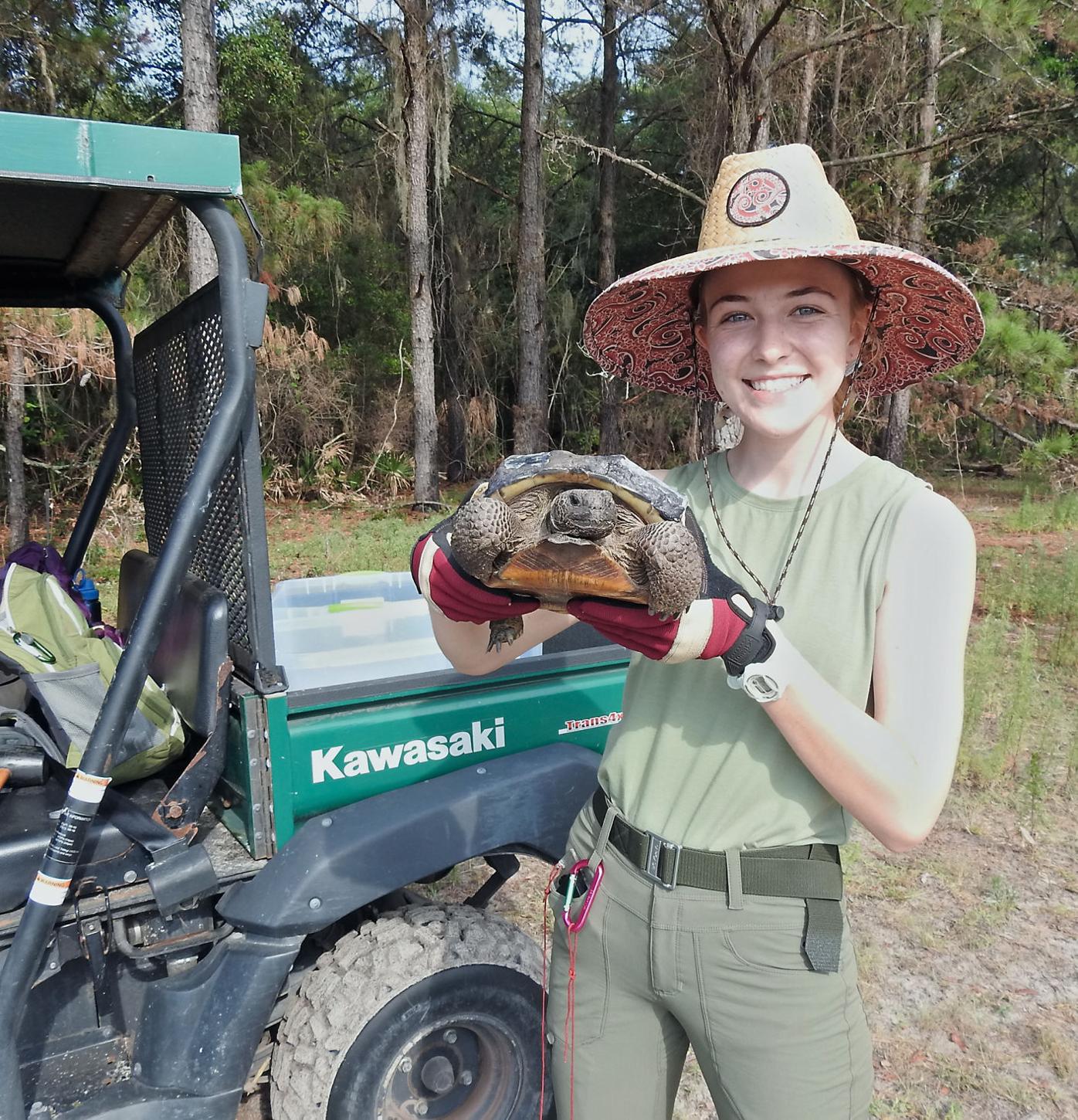 Rebecca Roberson holds her first successfully captured gopher tortoise on Cumberland Island National Seashore. The tortoise was measured, sexed, weighed and fitted with a GPS (global positioning system) transmitter to monitor its movements in its habitat. 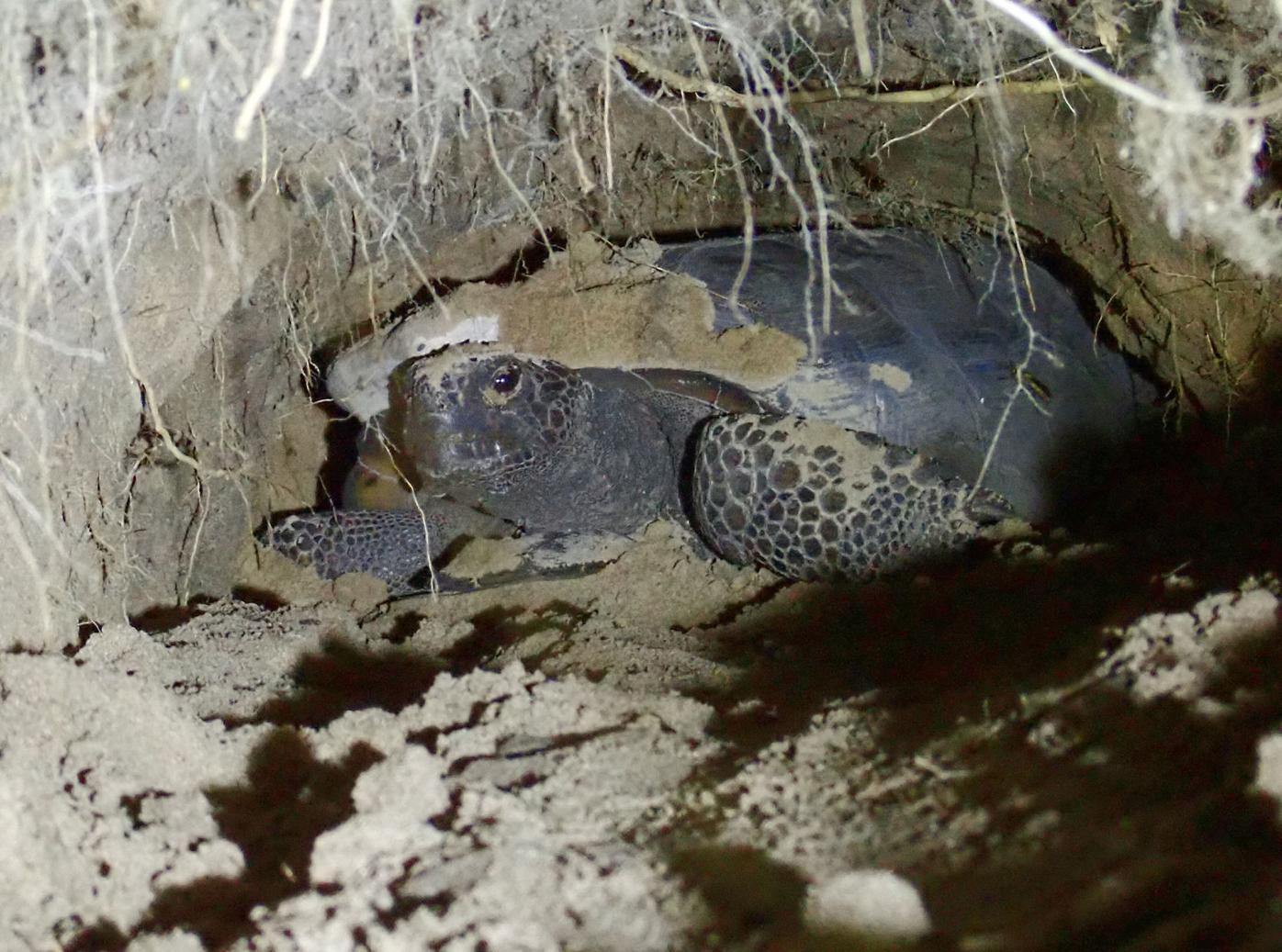 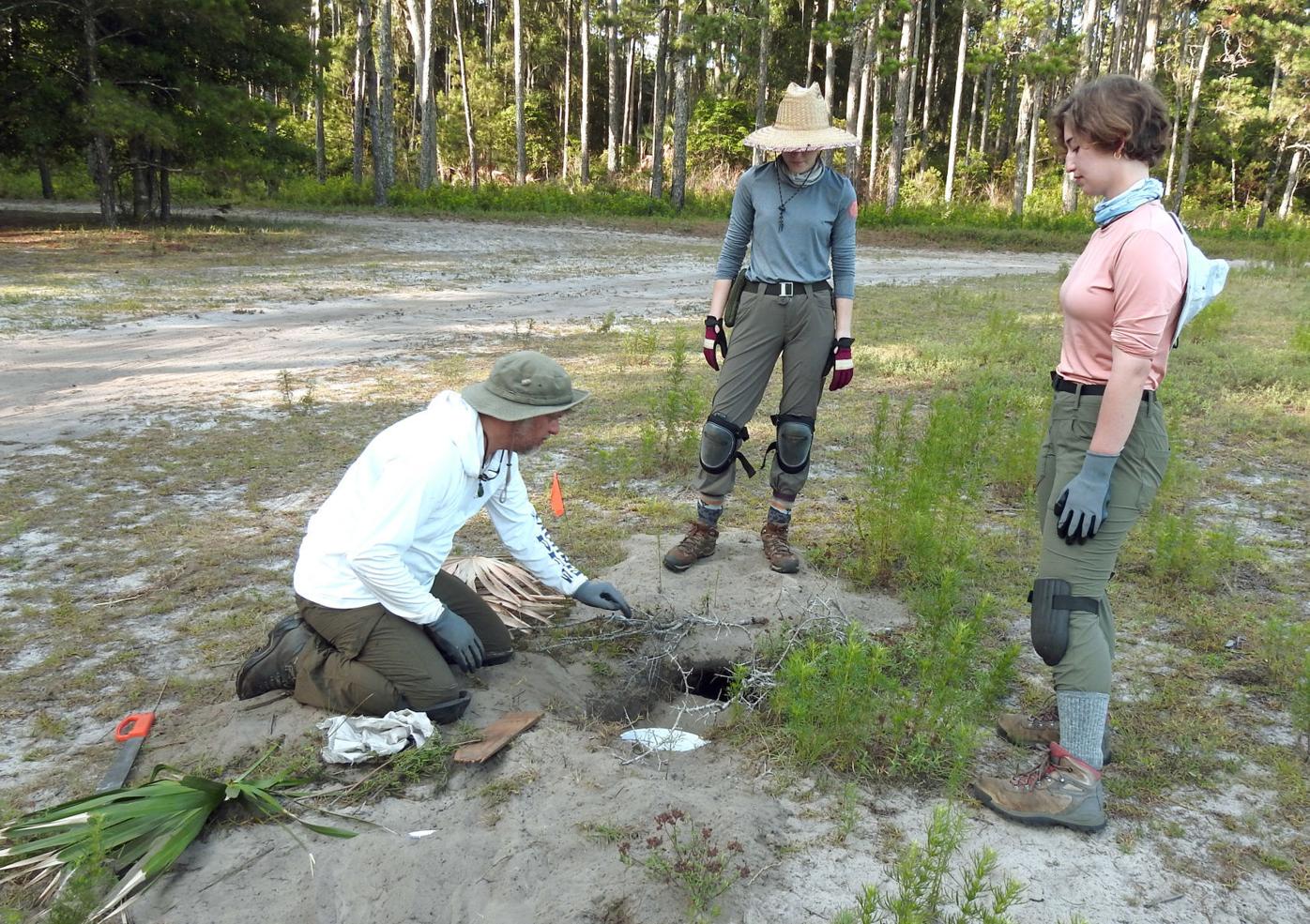 Dr. David Unger (left) shows Samantha Stacey (right) and Rebecca Roberson (center) how to properly dig and set up a trap designed to catch a gopher tortoise as it exits its burrow.

Rebecca Roberson (left) and Samantha Stacey hold a successfully captured gopher tortoise in preparation for measurements and the attachment of a GPS (global positioning system) transmitter.

Rebecca Roberson holds her first successfully captured gopher tortoise on Cumberland Island National Seashore. The tortoise was measured, sexed, weighed and fitted with a GPS (global positioning system) transmitter to monitor its movements in its habitat.

Dr. David Unger (left) shows Samantha Stacey (right) and Rebecca Roberson (center) how to properly dig and set up a trap designed to catch a gopher tortoise as it exits its burrow.

Many students dream of a summer spent on an island with miles of pristine beaches and diverse wildlife. This summer, two Maryville College students did just that as field technicians for two research projects on the Cumberland Island National Seashore.

Samantha Stacey, class of 2023 and Rebecca Roberson, Class of 2022, accompanied Maryville College Associate Professor of Biology Dave Unger to one of the only undeveloped barrier islands on the Eastern Seaboard. Here, they spent their summer researching two important wildlife species: the gopher tortoise and the Atlantic horseshoe crab.

Since 2015, Unger has been studying the gopher tortoise population on the Cumberland Island National Seashore with his co-principal investigator from Jacksonville University, Dr. John Enz. He was initially interested in the project out of curiosity — the tortoise was quite different from the large carnivores like wolves and bears that he’d worked with in the past.

“Tortoises are an ancient species that have survived a very long time, so I wanted to know what made them ‘tick,’ if you will,” Unger said.

One objective of the gopher tortoise study is to determine population dynamics and burrow preferences. This involved catching and releasing tortoises to determine their sex, weight and size. Around 10 tortoises were also fitted with GPS devices that were removed at the end of the summer.

The other objective was a commensal survey to determine which other species use the gopher tortoise burrows. Roberson, a biology major from Trinity, Florida, led the research for the commensal survey, since this will be the focus of her Senior Study at Maryville College. The team used motion sensor cameras and fiber optic cable cameras to monitor organisms entering or already inside the burrows.

“Gopher tortoises are considered ‘keystone species,’ because without their burrows, the ecology of the system would likely collapse,” Unger said.

In this case, location is everything. The lack of development on the protected island has spared its population of gopher tortoises from genetic alterations that occur when species are relocated, Unger said, adding that the population on Cumberland Island National Seashore could have been living there undisturbed for as long as 5,000 years.

Elsewhere, humans have greatly impacted existing gopher tortoise populations. Researching the healthy population that exists on the island is critical in order to help these threatened populations.

“This is yet another situation where an animal that is in no way harmful or threatening to humans is losing the battle of existence, because humans refuse to provide enough room for other organisms,” Unger said. “As we continue to chew up habitat, destroy green space and expand into what little undeveloped wild areas that are left, we are going to continue to impact these and other organisms that make up an important part of the fabric of life.”

Over the summer, the team also began a new study to determine the population dynamics, spawning behavior and distribution of Atlantic horseshoe crabs on the island. Unger describes the horseshoe crab as a “living fossil” and notes that they have existed for more than 480 million years.

Unger and Enz became involved with the study when the National Park Service reached out to see if they would be interested, given their history of research work on Cumberland Island National Seashore.

Horseshoe crabs are extremely important to the ecosystem, since their eggs provide food for birds migrating up and down the Eastern seashore, Unger said. However, the crabs have also proven to be beneficial to humans. Their blood can be used to check for endotoxin contamination in solutions like vaccines. This has led to overexploitation and often death for horseshoe crabs, particularly during the ongoing pandemic.

“As a result, in recent decades a decline in the number of crabs coming to shore to spawn has been noted,” said Unger. “This decline has led to less food for coastal migratory birds and thus a drop in their populations.”

Stacey, a biology major from Springfield, Tenn., plans to focus her Senior Study on the island’s horseshoe crab population, so she took the lead on the research. This meant documenting the size, sex and location of horseshoe crabs that had washed ashore, but her favorite memory was witnessing the horseshoe crab spawning at the beginning of the summer.

“We were able to go out on the beaches at night, during the supermoon of May 2021, and witnessed hundreds of horseshoe crabs along the survey area,” Stacey said. “To me, it was just amazing to see something like this that most people would never witness.”

The summer was filled with many more great memories for the students. Roberson fondly recalls sunsets spent on the beach and her first time holding a gopher tortoise.

“Having a gopher tortoise in my hands really cemented the fact that I am a wildlife biologist and living out the dream I always had as a kid,” Roberson said.

The students also gained invaluable field research experience. It’s a rare opportunity for most undergraduate students — but experiential, hands-on learning is something that Maryville College has always aimed to facilitate and encourage.

The students are confident that the experience they gained on this trip will be an important tool as they continue their education and pursue careers heavily reliant on research.

“Being able to do real biological research as an undergrad was incredibly valuable to me and allowed me to understand the sort of processes and work environment I’ll experience post-graduation as a wildlife biologist,” said Roberson.

Since the summer, Stacey’s career focus has shifted away from wildlife biology, but she knows the skills she learned will be useful in any science field.

“Collecting sound data, creating a solid methodology, and creating a strong work ethic to finish the project are all skills that I have been able to develop further and will be very beneficial to me in the future,” said Stacey.

While wildlife documentaries might paint a pretty picture of research in the field, Unger believes it’s vital for students to experience the hard work firsthand to determine whether it’s the right path for them.

“Yes, there are some amazing days filled with beautiful sunrises, perfect weather, the successful capture of an awesome organism, or a great new discovery,” the professor said. “Most days, however, are just hot, humid, sandy, sweaty, hard work that may or may not result in the successful acquisition of good data. If students can experience those days and still want to be a field biologist, then they know it for sure.”