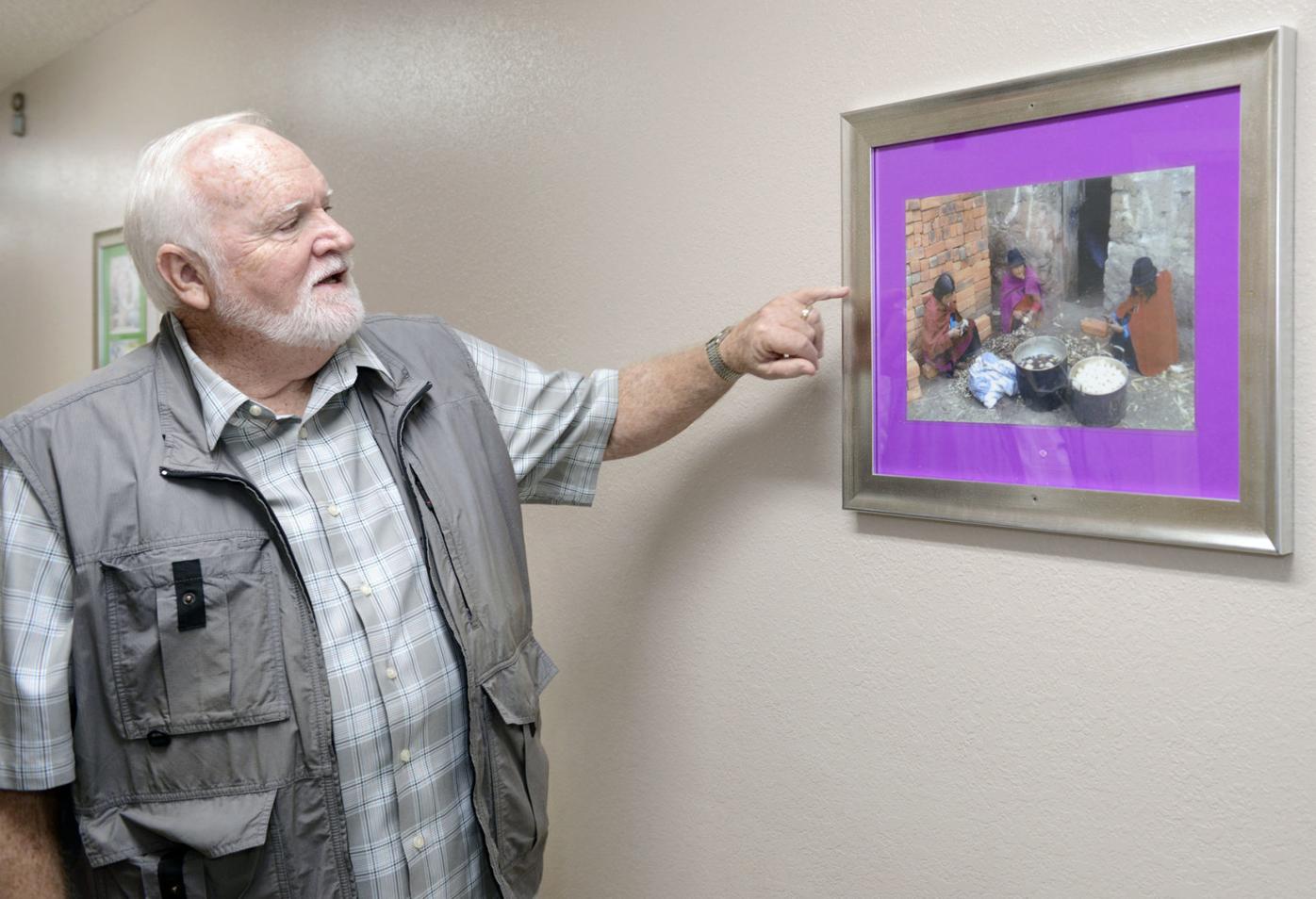 Pastor Ron Reagan shares the story connected with a photograph hanging in the hallway at The Meadow Church of God. He has spent a great deal of time in Ecuador, helping build churches and converting people to Christianity. 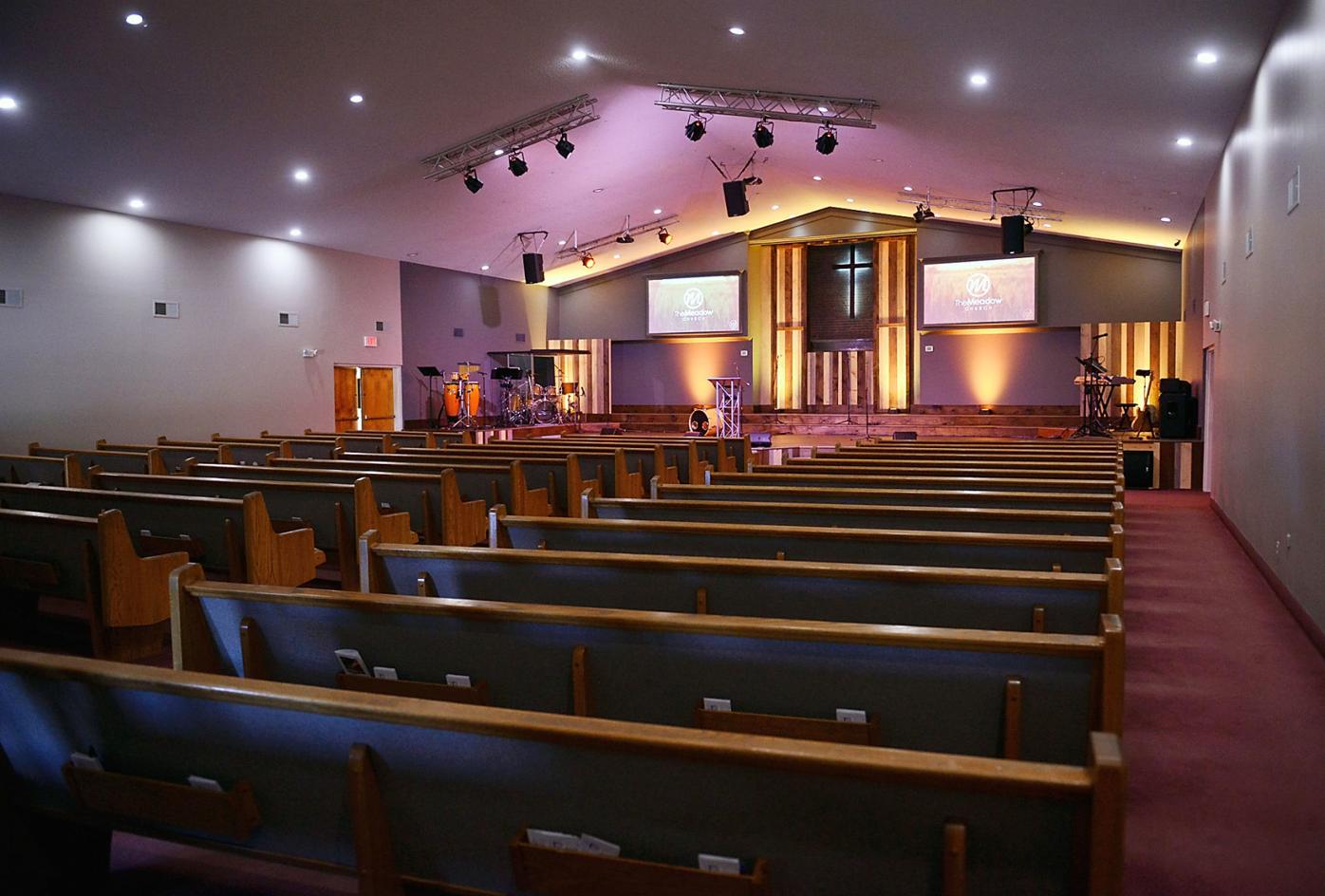 Plans for The Meadow Church of God include improvements to the worship hall. A new sound system and stage have been added. Next will be carpet and chairs. It seats about 300. 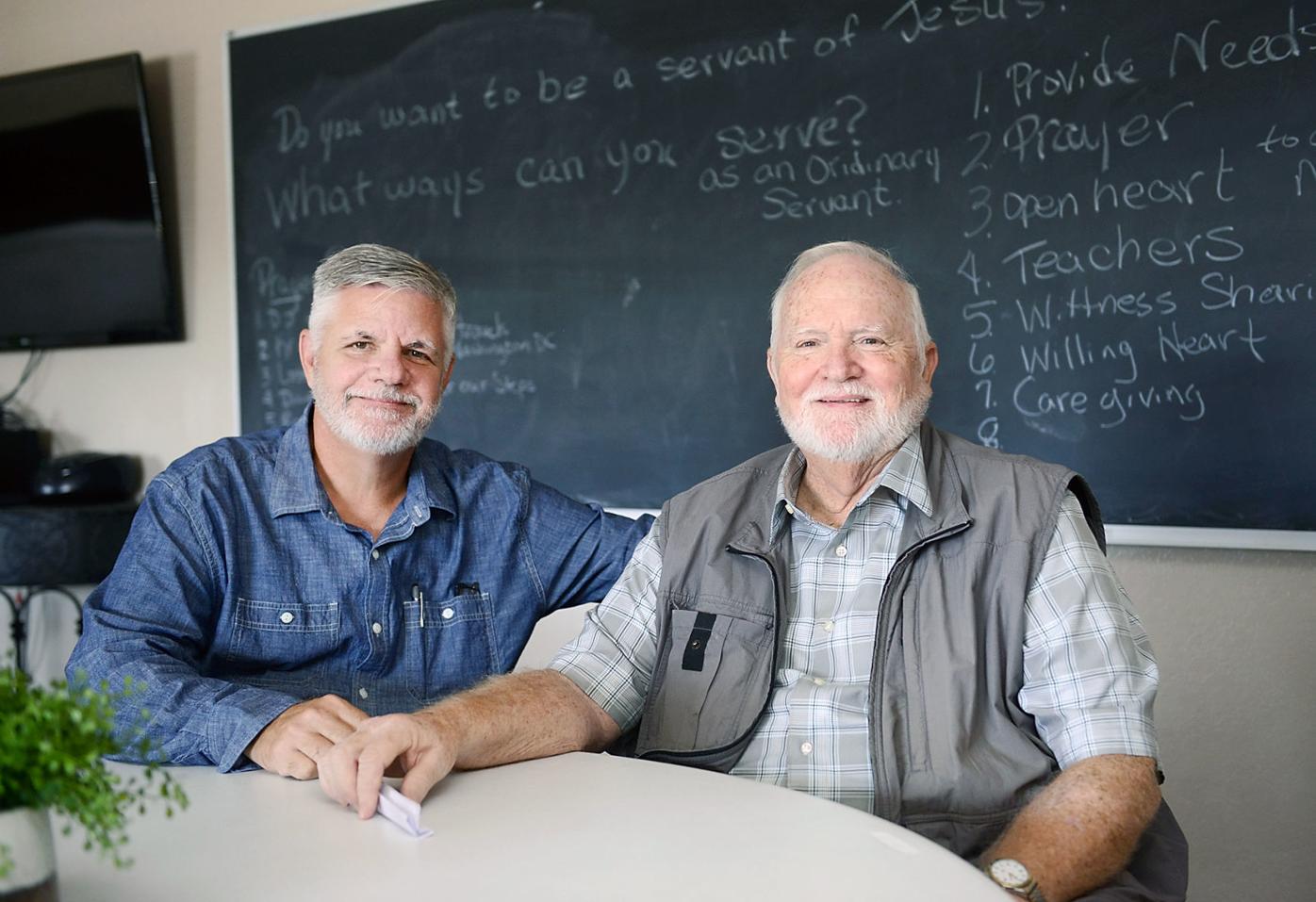 Pastor Ron Reagan shares the story connected with a photograph hanging in the hallway at The Meadow Church of God. He has spent a great deal of time in Ecuador, helping build churches and converting people to Christianity.

Plans for The Meadow Church of God include improvements to the worship hall. A new sound system and stage have been added. Next will be carpet and chairs. It seats about 300.

A traveler of 6 million miles can tell you a lot about the human condition, especially after visiting 21 countries.

Ronald Reagan, who retired as pastor of The Meadow Church of God in Maryville back in May 2018, has logged those miles on every continent with the exception of Australia. He said his heart for missions came to life in 1975. That was after a life wrought with drugs and crime. He almost died in a car accident and was nearly killed during a fight when he was a young man.

“When I was saved, I was a heathen,” Reagan said as he sat in the pastor’s office at The Meadow, now occupied by Chris Reneau, a longtime friend and missionary, too. “I was a no-count dirty dog. It took a miraculous experience to get my attention.”

That experience happened as Reagan was in an ambulance on his way to the hospital after a fight in which he suffered a severed artery from an attack with a bottle. Reagan said he saw a glimpse of hell and people screaming at him to turn back. Flames engulfed them.

God, he said in his new book, had pulled back the curtain of time. Reagan said he even recognized the faces of people he had known in life who had made bad decisions. He said in the book he felt like God had spared him one final time.

The vision, he said, led him to accept Jesus as his savior and put inside him an unquenching desire to become a minister and missionary.

Reagan wrote about his growing-up days with an abusive, alcoholic father and his conversion in a book he wrote back in 2000, called “The Lowest Hell ... the Highest Call.” He now has penned a second one, this time a journal of his footsteps along the trail to reach others for Christ. It’s titled “Driven by the Spirit: A Great Commission Quest.”

Reagan will preach Sunday, Oct. 27, at The Meadow Church of God and then sign copies of his book, which are $15. All of the proceeds will go into the church’s building fund.

“I carry a journal everywhere I go,” this missionary said. “Beginning in 1975. I write about events, whether I am in Africa or India or the Philipppines or the south of wherever. I always have a journal with me.”

The only exceptions are in places like Communist countries where freedoms are restricted, he pointed out.

In this latest book, there are entries he made on a 1979 trip to the Bahamas, India in 1981, Africa in 1997, Honduras in 1999 and Ireland in 2001 and 2002. This evangelist has been to Ukraine, Czech Republic, Cameroon and also Kenya. In 2011 he evangelized on the Navajo Indian Reservation in New Mexico.

Reagan’s most recent trip was to Ecuador, where he has helped build churches alongside the indigenous people. Roads are dug with primitive tools and concrete is mixed on the ground using sand sifted through metal screens.

It was just days before a riot took place in that country over the government increasing gas prices 300%. Having seen how hard it is for these families to survive, Reagan said his heart and prayers went out to them.

“They have a certain way of life,” Reagan said. “They have nothing. If their way of life is shaken, they starve or die. There is no fall-back plan.”

In the end, the fuel price increase was rescinded but not before some blood was shed in the capitol of Quito.

In another part of Ecuador, Manta, Reagan helped build a church and also rebuild after an earthquake destroyed the downtown.

“We went there several times to help,” Reagan said. “People were living in boxes with tarps, on the ground. There were children who had missing limbs. One lady who owned a small motel lost it and all five of her children.”

A walk through time

There is a hallway in The Meadow Church of God that has been dubbed the Hall of Missions. Along the walls are photographs of the people eeking out an existence in the high mountains of Ecuador; children tag along as women build the roads all the while taking abuse from their husbands.

“In the mountains, the women work like animals,” Reagan said. “Their hands are like getting a hold of a piece of wood. Fifteen women can take picks and shovels and build a road in 24 hours. They are treated bad by the men.”

In addition to bringing the news of Jesus Christ, Reagan and others on these missions also teach the tribes about birth control and hygiene. Crusades also call out the men for their behavior, telling them kindness and compassion, not cruelty, are the way to behave.

Reagan and his wife, Elaine, have been married for 55 years; she was only 15 and he, 17. She has been on many of the trips around the world.

Over his 43 years on the road, Reagan has come into dangerous situations. He and a group that included Reneau were on a plane that had just left Amsterdam when it was suddenly rerouted from its destination to Vienna, Austria. They learned after they landed there had been a bomb threat. This was the same day Israel Prime Minister Yitzhak Rabin was assassinated, Nov. 4, 1995, in Israel. That was the plan’s original destination.

They did arrive in Jerusalem, hours late. And when the group went to the Wailing Wall, they were again quarantined off. A suspicious bag had been left at the wall.

Reagan said he will never forget what an Israeli solider told him that day, after apologizing for the interruption of their visit.

Israel has been a destination for Reagan 38 times. He also has been to Syria and Turkey.

Preaching to the masses

He has preached to small groups and crowds of 10,000 and more. Reagan said he has helped more than a million people come to God. And he isn’t done.

He invites people to come hear him preach Sunday and attend his book signing. He will have copies available for $15. It also will be available on Amazon.

The church is at the former home of First Apostolic Church of Maryville, which built a new facility down the road along William Blount Drive. The sanctuary has been remodeled with a new sound system and lighting. New carpet and seating are coming soon. Nurseries have been updated and lots of painting has taken place. All of the work is being done on a cash basis.

He’s now called pastor emeritus, and Reagan says that stand for “Papaw.” He is very active in the congregation and said he has been able to accomplish so much because of the support of his church and community.

“We have done so much ministry here,” he said. “We have a heart for the community. Blount County has helped me reach the world. This has been my home and base for many, many years.”

Ronald Reagan will sign copies of his new book, "Driven by the Spirit: A Great Commission Quest," from 1 to 3 p.m. on Sunday, Oct. 27 at The Meadow Church of God, located at 1723 William Blount Drive, Maryville. Books will be av available for $15. All proceeds will go to the church's building fund.