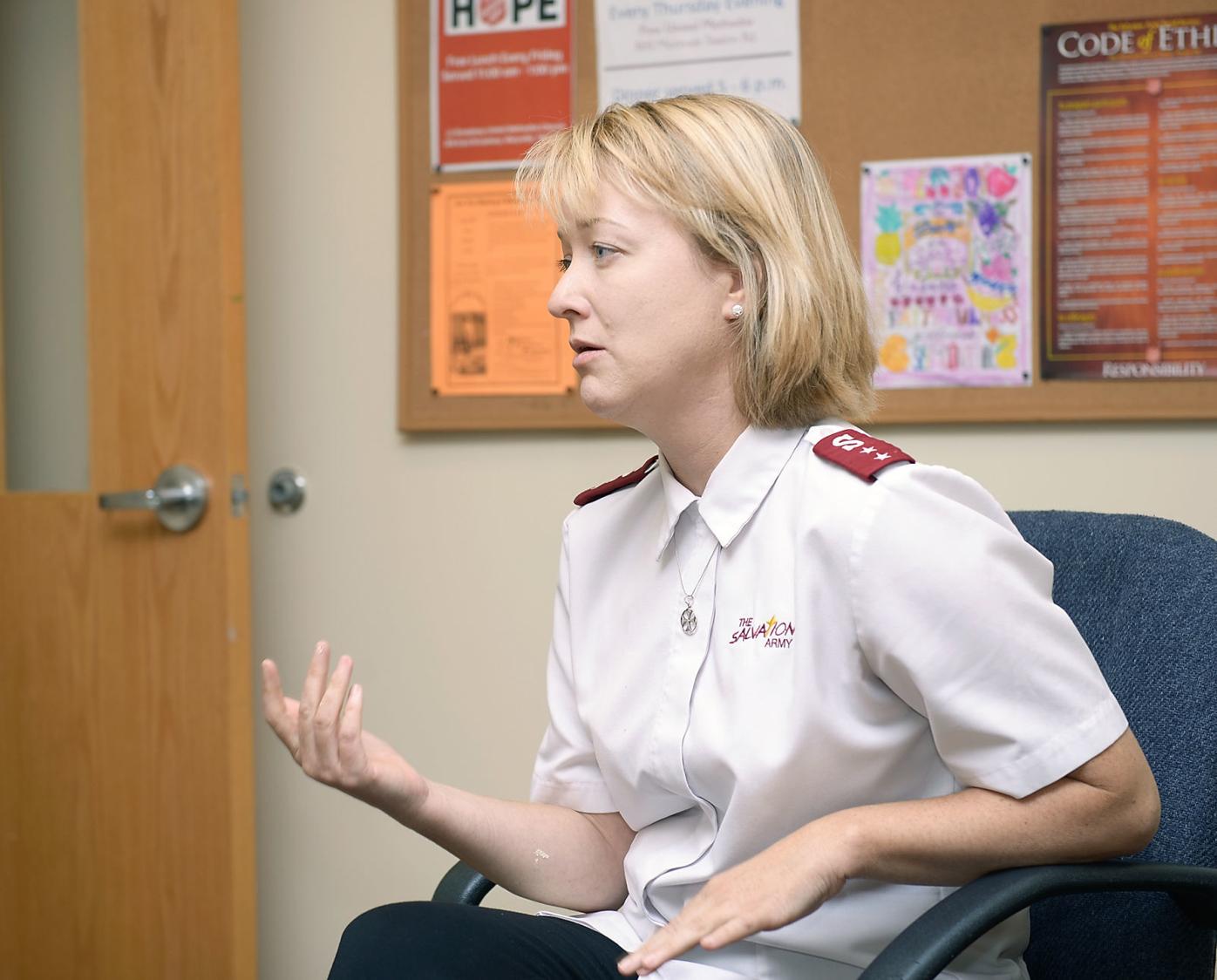 The Salvation Army’s Capt. Maureen Diffley talks about the organization’s move to their new location at St. Andrew’s Episcopal Church in Maryville. 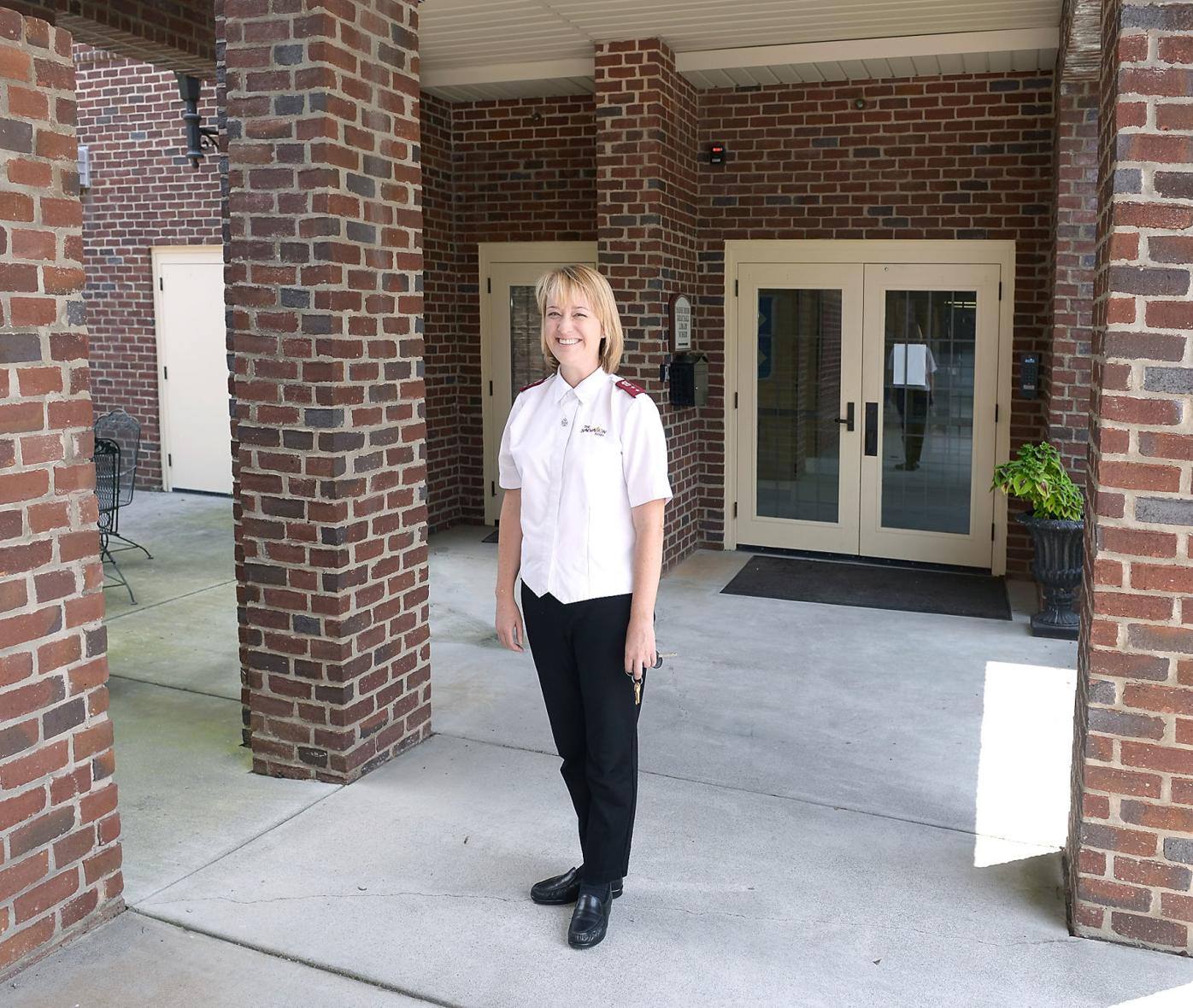 The Salvation Army’s Capt. Maureen Diffley outside her new office at St. Andrew’s Episcopal Church. Another organization, Good Neighbors, is also housed on this church campus. 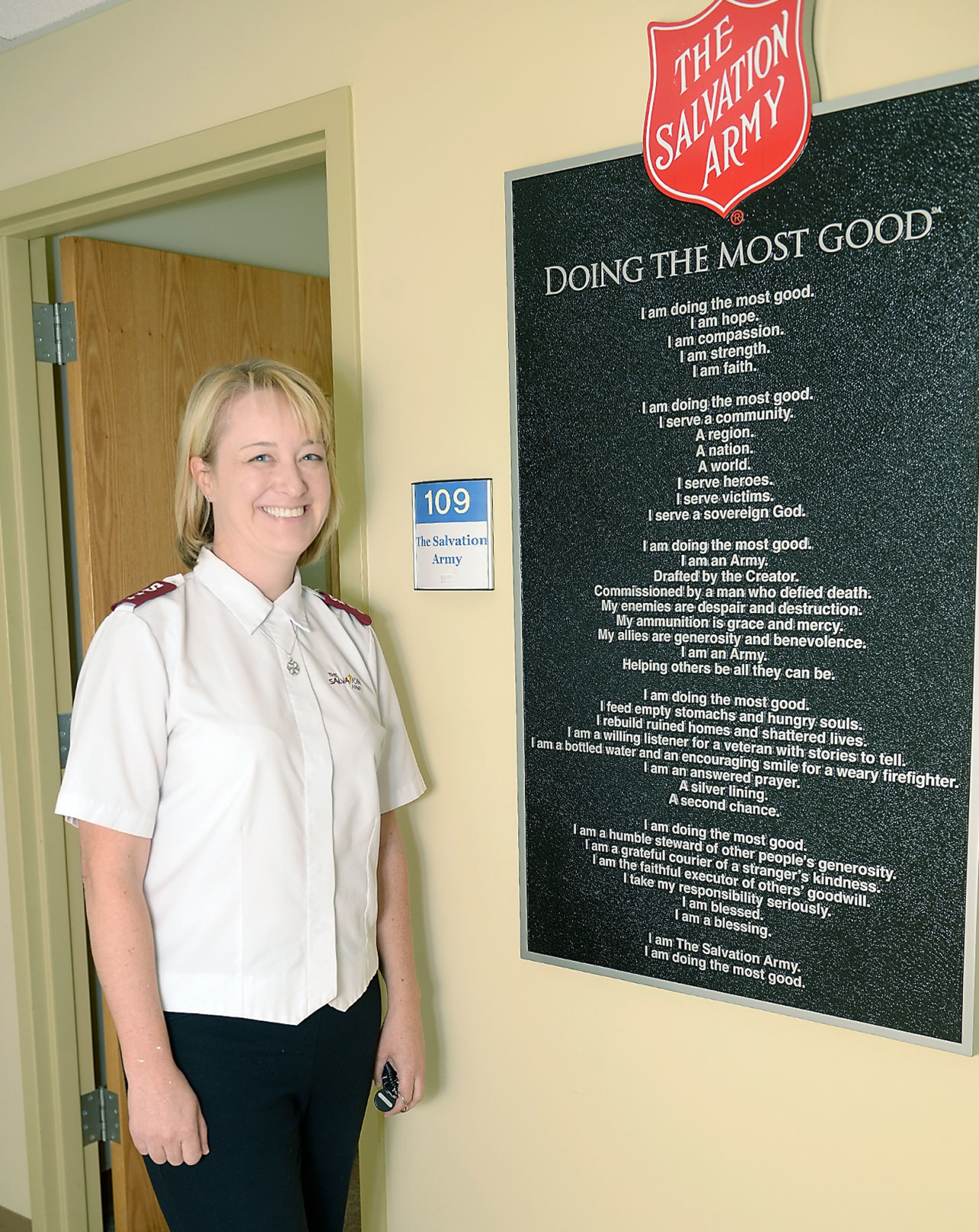 The Salvation Army moved to its new location in May. Capt. Maureen Diffley stands outside her new office at St. Andrew’s Episcopal Church. 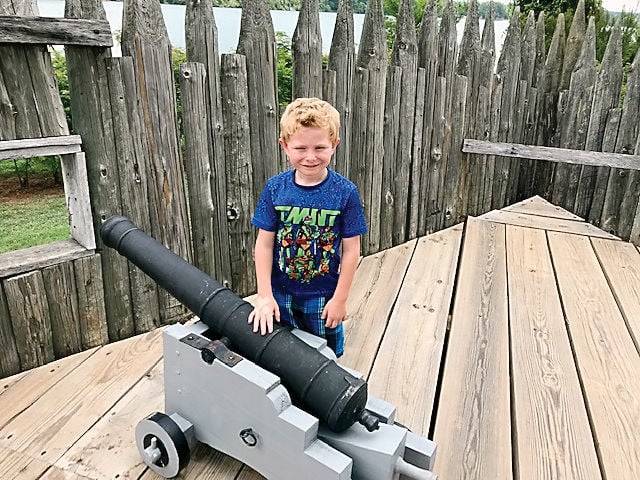 Jackson Singleton with a cannon at Ft. Loudoun during a recent outing with the Relatives Raising Kids program of Salvation Army. 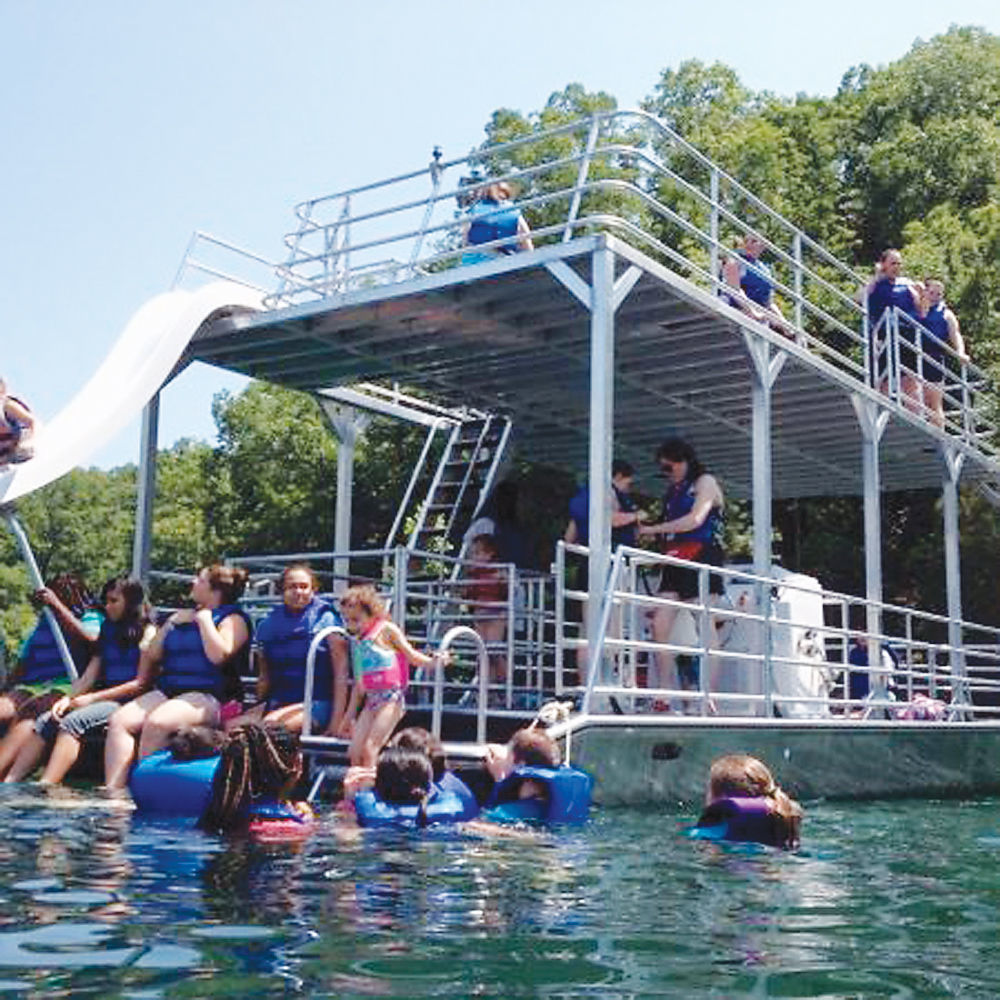 The Salvation Army’s Capt. Maureen Diffley talks about the organization’s move to their new location at St. Andrew’s Episcopal Church in Maryville.

The Salvation Army’s Capt. Maureen Diffley outside her new office at St. Andrew’s Episcopal Church. Another organization, Good Neighbors, is also housed on this church campus.

The Salvation Army moved to its new location in May. Capt. Maureen Diffley stands outside her new office at St. Andrew’s Episcopal Church.

Jackson Singleton with a cannon at Ft. Loudoun during a recent outing with the Relatives Raising Kids program of Salvation Army.

It’s been a busy summer for Blount County’s Salvation Army with moving it its office and the kickoff of its new program, Relatives Raising Kids, but there’s no slowing down, Capt. Maureen Diffley said.

It’s already August, which means the holiday season and Angel Tree are on the horizon.

Diffley, who took over leadership of the local SA in June 2018, said the move from the previous location to the campus of St. Andrew’s Episcopal Church in downtown Maryville was mostly completed in May. The move from its previous Sevierville Road location gives the nonprofit more visibility and convenience for customers and volunteers, Diffley said.

Now instead of one large meeting space, the Salvation Army chapter has two separate spaces in St. Andrew’s Great Hall during the week and the use of other rooms upstairs for Sunday evening services.

Diffley said she had been searching for a while for an arrangement like this.

“In Eastern Europe, there is a lot of church sharing,” she explained. “It’s very common to share space.”

Diffley is a New Jersey native. She has spent her Salvation Army career in places like Russia, Ukraine, the Republic of Georgia and stateside in places like Atlanta. She speaks Russian and took her SA training there.

Relatives Raising Kids began in March, a program that provides monthly field trips or activities for children ages 6 to 12 who are being raised by a relative other than a parent. So far, the participants in the program have gone to visit Historic Ramsey House in Knoxville and Sequoyah Birthplace Museum in Vonore. A future trip is planned to do some whitewater rafting.

Hiking will be on the calendar for fall.

“The program has done really well,” Diffley said. “We have had new families each time we take a trip.”

Something else that made summer a whole lot more fun for a few kids was getting to attend summer camp at Camp Paradise in Kentucky.

Diffley said five of the children in their programs attended last month.

“None of them had been to camp before,” Diffley said. “They did really well. Two of our kids won awards, which was really nice.”

The extra room at SA’s new home is used for its gas cards program that provides $25 gift cards for clients who are in need. Because the economy is good, Diffley said most of those in the program now have found jobs.

They just need gas to get to work until that first paycheck arrives.

The only thing missing at this new locale is warehouse space to store items for the annual Angel Tree. Diffley said she is looking for donated space.

The Angel Tree program serves children from families with low incomes or who have experienced a recent financial challenge. In 2018, 238 children received help.

Additionally, SA has a Silver Bells outreach for senior adults.

More and more people in this community are realizing what SA is all about with the Friday Free Food and Fellowship, Diffley said.

This ministry is a partnership with Broadway United Methodist Church, in downtown Maryville.

Seniors who live in public housing enjoy the social aspect of the gathering, Diffley said.

There are homeless people in the community who take part, too.

Diffley is able to oversee all of the programs with help from many volunteers, from those who serve the free Friday lunches to adults who serve as chaperones for the Relatives Raising Kids to Angel Tree gift distribution.

Last year, she said the final total for the annual Red Kettle Campaign was down, due in part to not having enough paid people. They stand in front of retail outlets and seek donations in big red kettles. All of the money collected locally stays here.

“We had great volunteers, but we had a hard time getting people to ring for pay,” Diffley said. “We don’t pay much and it’s outside and it’s cold.”

As the school year gets underway, Diffley said she knows the next few weeks will fly by and the holidays will be upon us. There are plenty of ways to get involved. For instance, the week of Sept. 10-14 will be when SA registers families for Angel Tree.

Volunteers are needed. And in December, people are needed for collection of gifts and sorting. Relatives Raising Kids could use some extra adults.

They must complete a Safe from Harm orientation and pass a background check. Field trips are taken on Saturdays. The Red Kettle Campaign gears up in November. Bellringers serve at local Walmart and Kroger locations as well as Hobby Lobby, Rural King and Foothills Mall.

The move is complete and volunteers are being recruited, Diffley said.

With so many different opportunities, there is a way to plug in that will suit anyone looking to serve, Diffley said.

Salvation Army of Blount County has moved to 314 W. Broadway, Maryville, Room 109, which is on the campus of St. Andrew's Episcopal Church. Contact them at 865-983-7135. Capt. Maureen Diffley can also be reached at maureen.diffley@uss.salvationarmy.org. Volunteers are needed for various programs.