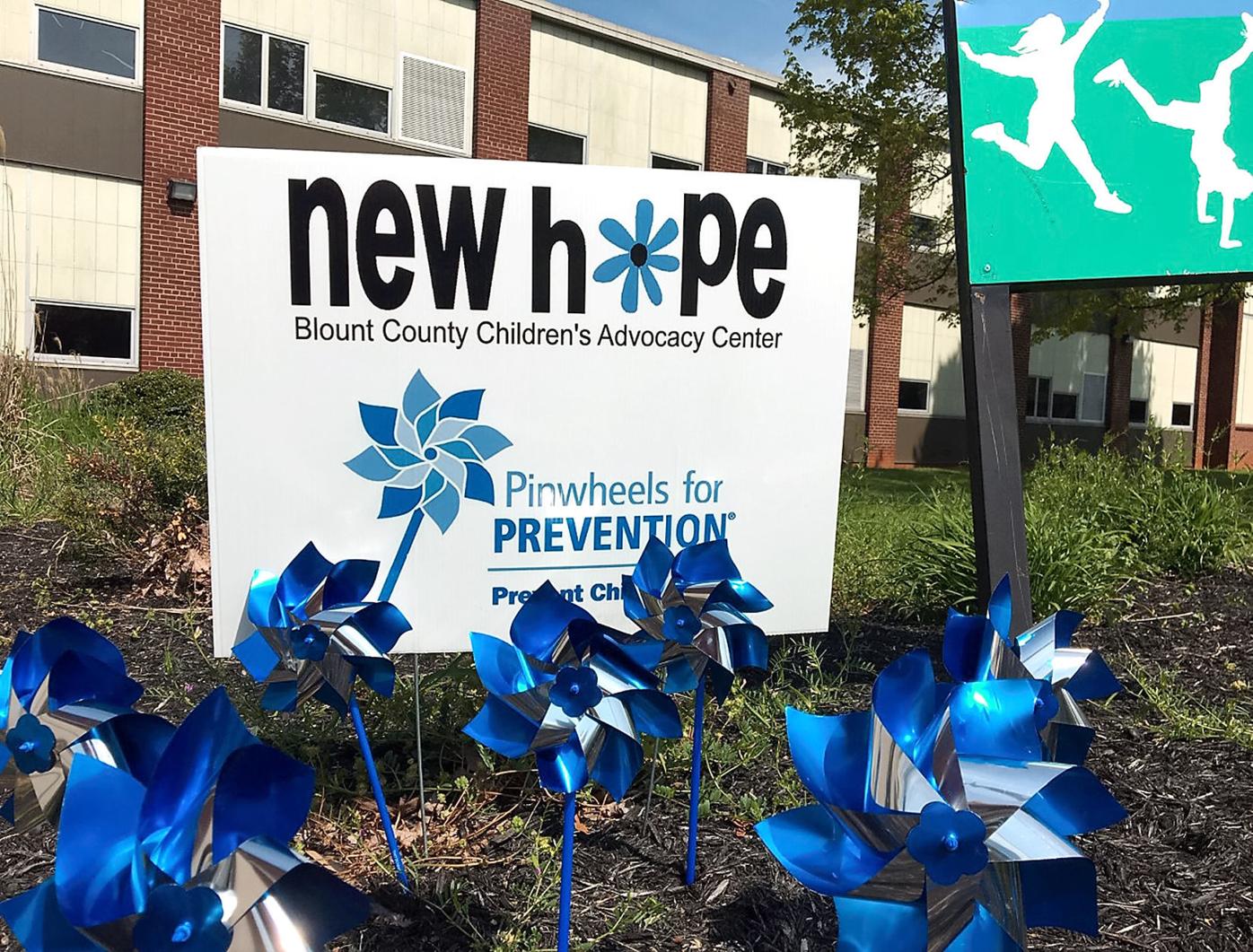 Businesses and others have dotted their landscapes with pinwheels in support of New Hope Blount County Children’s Advocacy Center and Child Abuse Prevention Month. 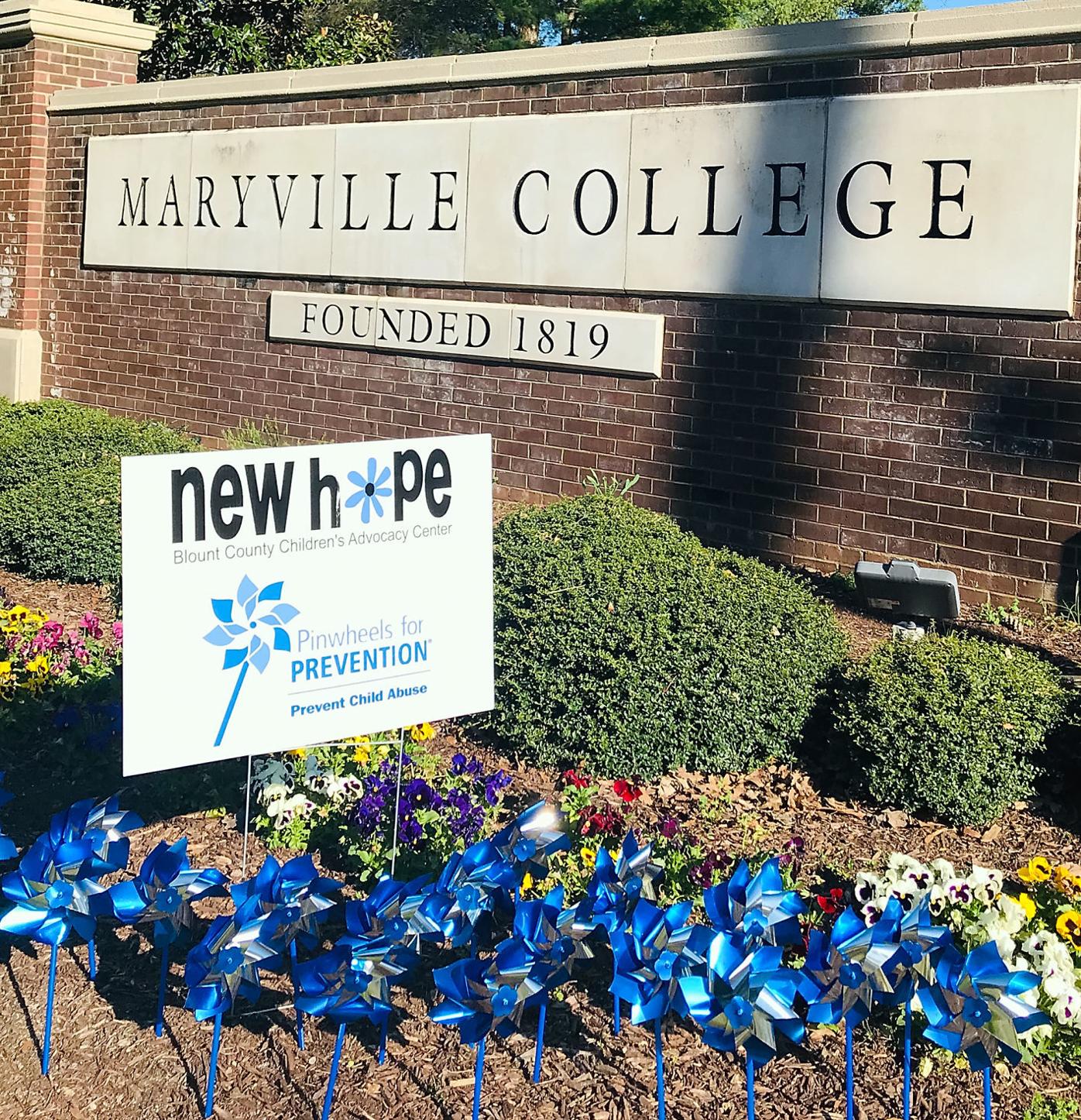 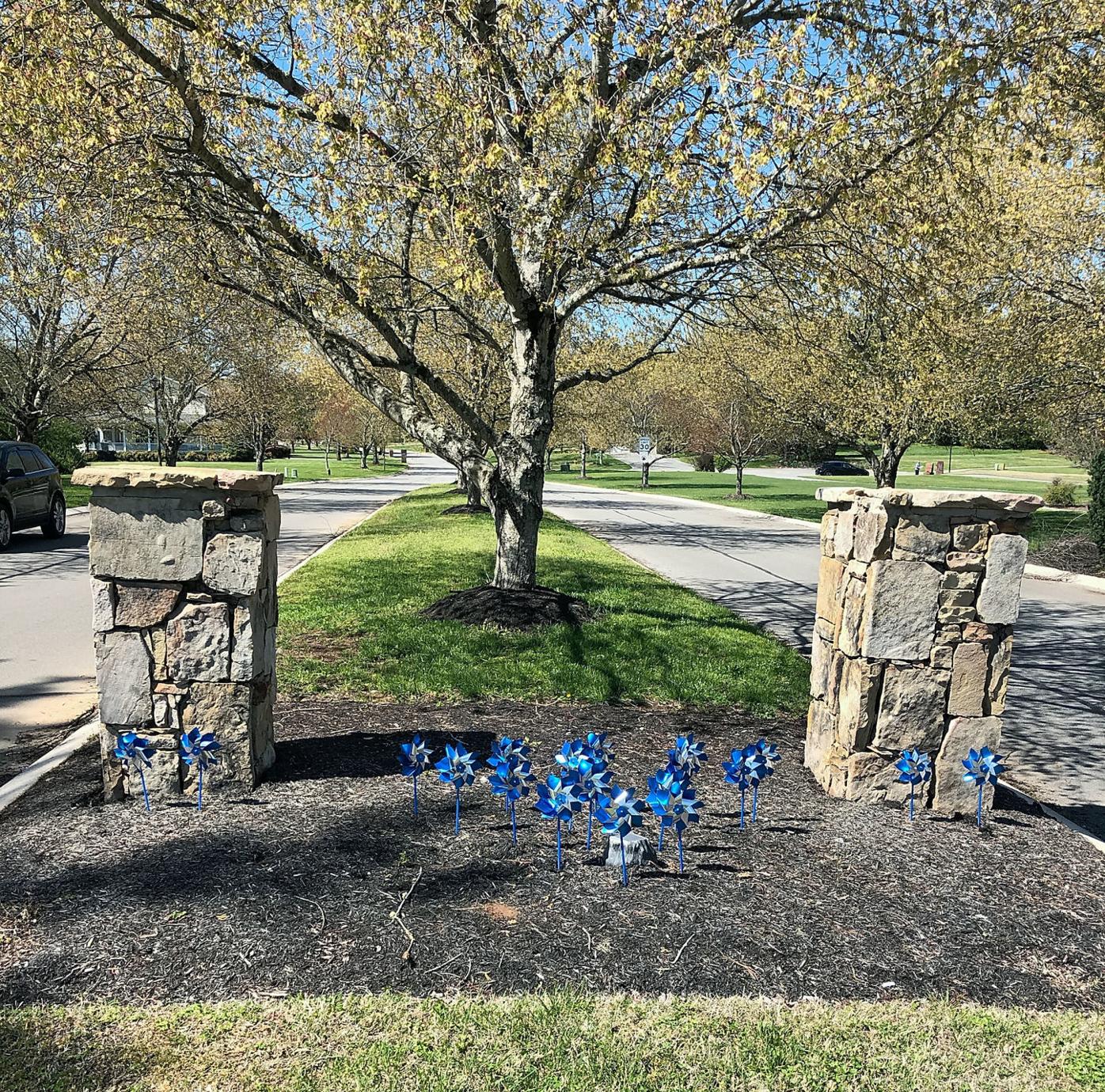 Pinwheels are a symbol of childhood. Many are being displayed around the community in observance of Child Abuse Prevention Month. 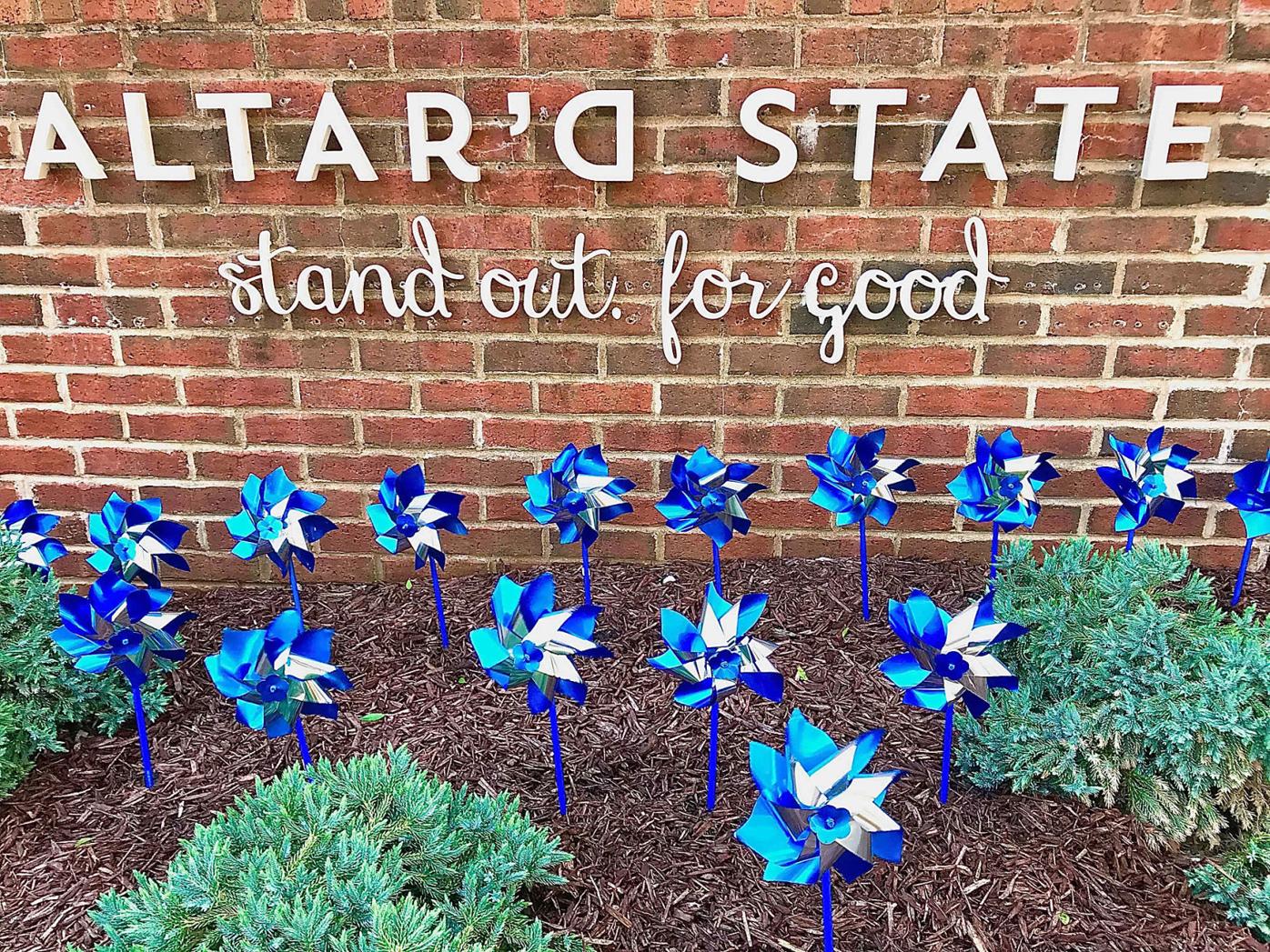 Altar'd State is one business in Maryville where pinwheels are being displayed for Child Abuse Prevention Month. 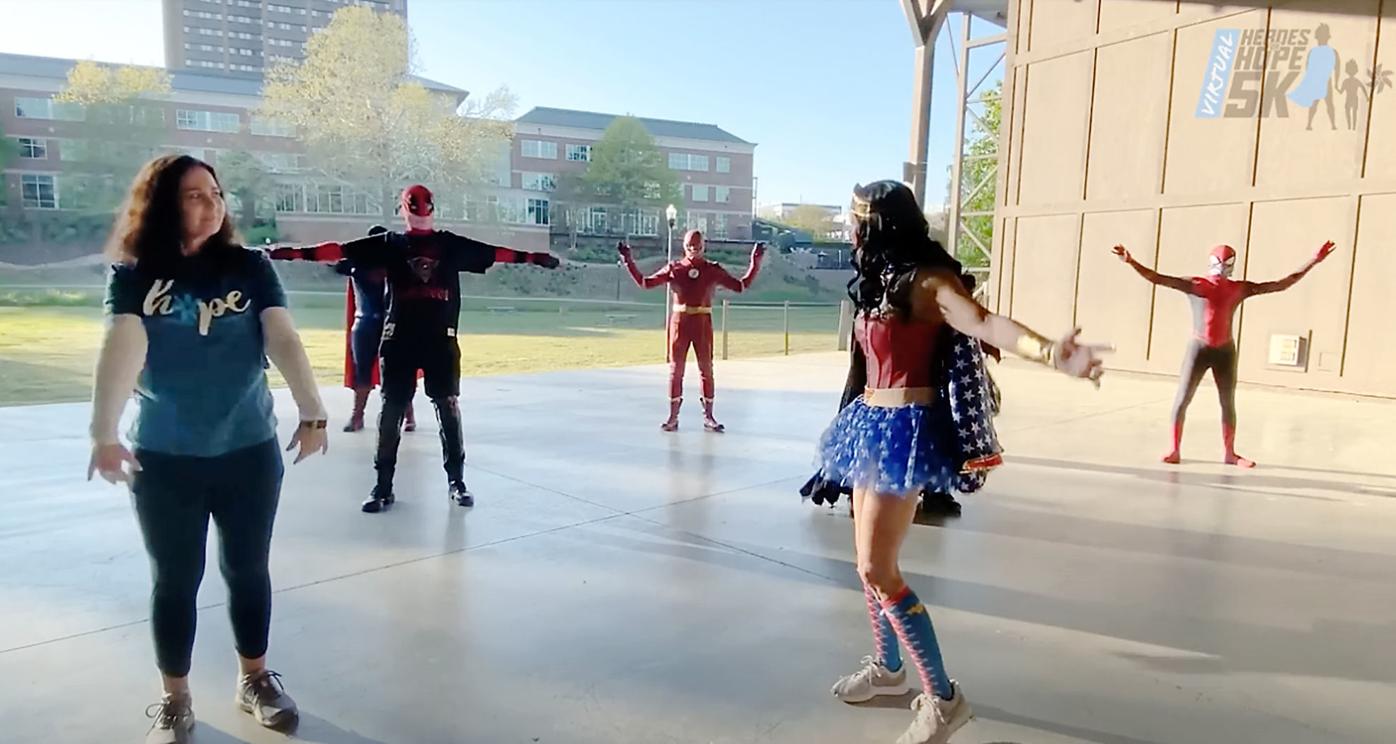 Angie Luckie leads some superheroes in a workout for New Hope Blount County Children’s Advocacy Center’s Heroes for Hope Virtual 5K that was held April 18 through use of videos.

Businesses and others have dotted their landscapes with pinwheels in support of New Hope Blount County Children’s Advocacy Center and Child Abuse Prevention Month.

Pinwheels are a symbol of childhood. Many are being displayed around the community in observance of Child Abuse Prevention Month.

Altar'd State is one business in Maryville where pinwheels are being displayed for Child Abuse Prevention Month.

Angie Luckie leads some superheroes in a workout for New Hope Blount County Children’s Advocacy Center’s Heroes for Hope Virtual 5K that was held April 18 through use of videos.

Pinwheel gardens have been popping up in yards and at businesses in Blount County all throughout April, the month designated to increase awareness of child abuse and prevention across the nation.

Locally, New Hope Blount County Children’s Advocacy Center has been spearheading the effort. Becky Rials, prevention coordinator, said 1,100 pinwheels are displayed at places like Altar’d State, the Barn Event Center in Townsend, Maryville College, Blount County Chamber, United Way, Blount County Courthouse, flowerpots along Hall Road in Alcoa and other locales. There would have been more, Rials said, but the coronavirus pandemic forced the closure of many businesses and schools.

Pinwheels for Prevention is a nationwide project and New Hope has been a participant for years. In addition to the pinwheel gardens, New Hope has two billboards in the area — one on Alcoa Highway near Green Acres Flea Market and the other on Calderwood Street in Alcoa.

The Capitol Theater in downtown Maryville erected a sign on their marquee in observance of the special month, and First Baptist in Maryville used its digital sign to also give awareness.

“All children deserve a happy, healthy childhood,” Rials said. “This event promotes that. The pinwheel is a symbol of childhood.”

April is National Child Abuse Awareness Month. New Hope is the center where child victims of sexual and physical abuse are brought under one roof so multiple agencies and professional can coordinate and deliver services in one place. And so the victims only have to tell their stories one time.

The center works with the office of the district attorney general’s 5th Judicial District, local law enforcement, the state Department of Children’s Services and medical professionals, forming the Blount County Child Protective Investigative Team. New Hope was formed as a result of the 1985 Tennessee Sexual Abuse Law, which mandated that agencies work together in intervention, investigation and prosecution of child abuse cases.

Tamron Damron, New Hope’s executive director, said her agency served 588 children in 2018 and 612 in 2019. She said the pandemic has affected not only businesses and schools. Department of Children’s Services has reported that from March 1-April 18, child abuse reports are down 30% from the same time last year. That doesn’t mean there is less abuse happening, however, Damron said.

“Because children are not in school or interacting with people outside of their homes to disclose abuse, we would like to ask and encourage people in Blount County to report any suspicions of abuse,” Damron said. “This is not the time to turn a blind eye. Children are counting on the adults in our community to keep them safe.”

An estimated one in 10 children will be sexually abused before age 18. In 90% or more of the sexual abuse cases, the child is abused by someone he or she knows and trusts. An estimated nine out of 10 cases of child sexual abuse are never reported.

Rials also stressed the importance of all Blount Countians being the eyes in our community.

“We know, unfortunately, that all children aren’t safer at home,” she said. “Some of these kids may be living with their abusers 24/7 and don’t have that trusted adult they had when they were either going to school, going to church, going to an activity. It is really important to get the word out that we all are mandatory reporters in our state.”

Rials said special emphasis on child abuse and prevention is done this time every year. There is even a Blue Sunday Day of Prayer held on the last Sunday of April. The event was started in 1994. Rials said New Hope staff members have been wearing blue every Friday in support of Child Abuse Prevention Month.

“Blue Sunday began with 20 churches in 1994 and has grown to include 7.4 million participants on five continents,” Rials said. She said churches around the world are asked to pray for victims of child abuse, their rescuers and caregivers.

But child abuse doesn’t just happen in April, Rials said she and everyone else is aware. New Hope has education programs in place all year long. One, called Stewards of Children Training, is a free program that trains adults how to prevent, recognize and react responsibly to child sexual abuse. It is geared toward day care workers and teachers and anyone with the desire to help prevent children from being victims.

The goal of New Hope was to train 5% of the Blount County population, Rials said. They have since passed that mark. Just in the first three months of this year, 395 adults took the training. The total for 2019 was more than 1,000.

“Our goal was to train over 5,000,” she said. “We hit that last year, with over 5,400 adults trained. We are now going for 7%. I am really hoping we can catch up once we can have training again. Child abuse doesn’t stop.”

Several of the Stewards of Training sessions had to be canceled due to the pandemic. A fundraiser for New Hope featuring the Young Fables also had to be canceled. But, the Heroes for Hope 5K did take place, as a virtual race to raise funds and awareness.

Tori Thomas, events and marketing coordinator for New Hope, helped create the event using the center’s Facebook page. There was a video introduction at 9 a.m. April 18, including superhero warmups, performances from local artists and more. Participants were encouraged to walk or run while practicing social distancing. Co-chairs for the event were Angie Luckie and Penny McIntosh.

Other awareness campaigns initiated by New Hope include a three-minute video accessible on YouTube. It’s called Blount County Ripples of Change and provides testimonies of participants in Stewards of Training. Thomas and her husband put the video together.

All of these efforts are meant to help identify abuse and get child victims the help they need. Rials said the people of Blount County have always come together to help with this important mission.

“These children have no voice,” she said. “We are helping them have a voice.”

To report suspected cases, call the Department of Children's services 24-hour hotline at 877-237-0004. All calls are confidential.