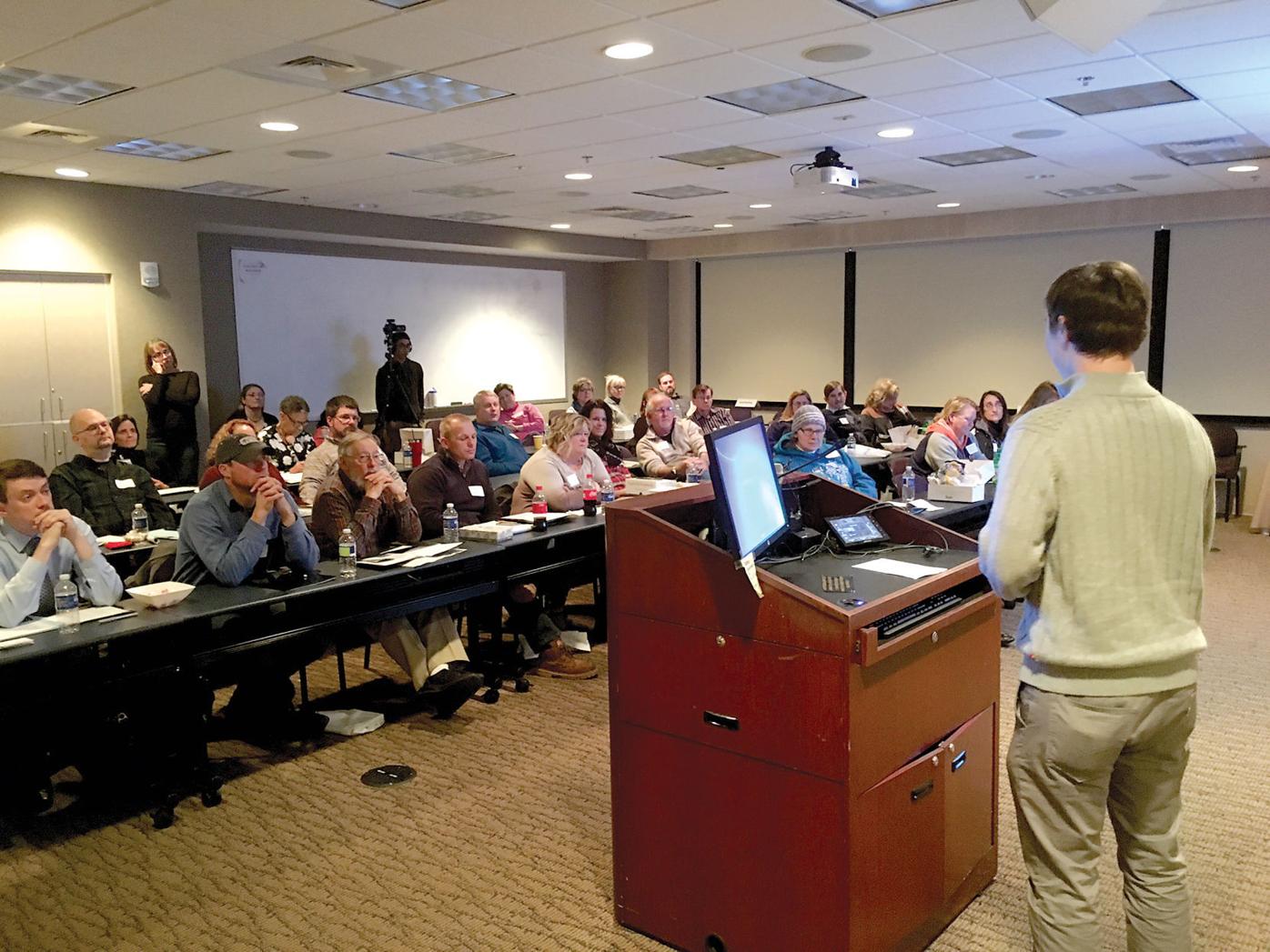 Nathan Porter, 16, is pictured as he presents a program at a recent AMENSupport Multiple Endocrine Neoplasia (MEN) Seminar at Vanderbilt University in Nashville. In 2010, the young man was diagnosed with MEN 2B, a rare disease which leads to thyroid cancer. 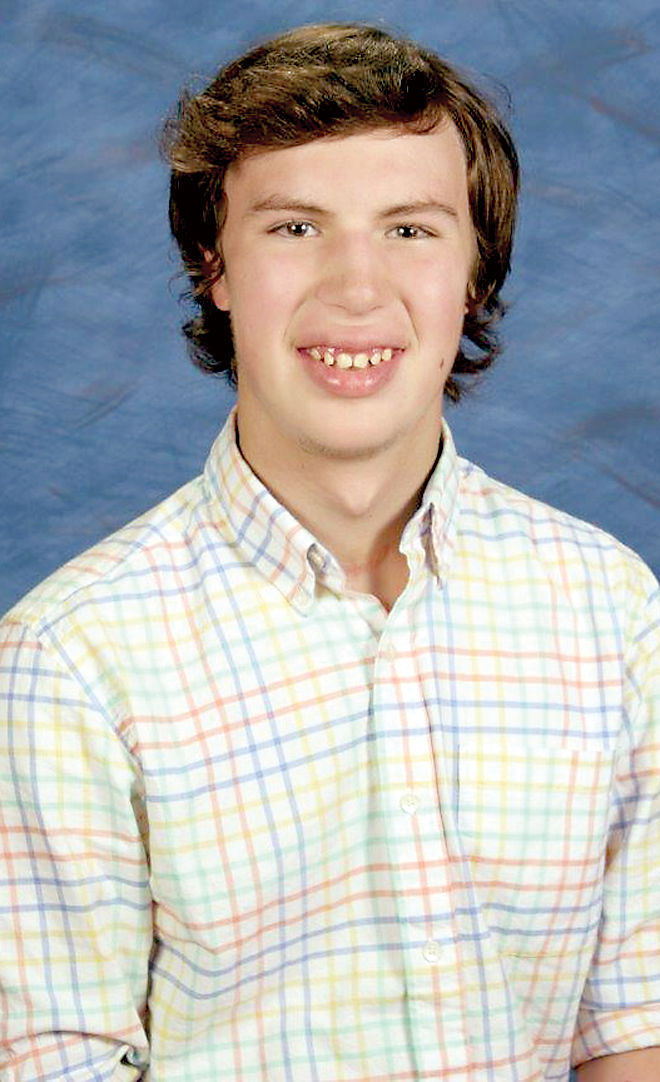 Nathan Porter, 16, speaks out about multiple endocrine neoplasia 2B, a rare disease with which he was diagnosed in 2010.

Nathan Porter, 16, is pictured as he presents a program at a recent AMENSupport Multiple Endocrine Neoplasia (MEN) Seminar at Vanderbilt University in Nashville. In 2010, the young man was diagnosed with MEN 2B, a rare disease which leads to thyroid cancer.

Nathan Porter, 16, speaks out about multiple endocrine neoplasia 2B, a rare disease with which he was diagnosed in 2010.

Rare Disease Day is Tuesday, Feb. 28, with activities scheduled worldwide to raise awareness among policymakers and the public about rare diseases and their impact on patients’ lives. This year’s global theme is “Research,” and the slogan is “Research brings hope to people living with a rare disease.”

Nathan Porter, a 16-year-old student at Oak Ridge High School, can definitely speak on a rare disease called multiple endocrine neoplasia and how it has affected him and his family. The teen was diagnosed with MEN type 2B when he was 10 years old — the most common sign of MEN 2B is a form of thyroid cancer called medullary thyroid carcinoma.

“It was in August 2010,” Porter recalled. “It was right after I had some mouth surgery. I had some tissue removed from my cheeks, and they sent that in for protocol. It came back positive for this really, really rare disease — it was a shock to my family and I. I was 10, I didn’t have too much comprehension of what it meant. Because of that, the only thing that got through to me was ‘cancer.’ It really shocked me and led me to thinking ‘Why me?’

“I had to have my thyroid removed,” he said. “So my parents went into extensive research for the best places that had oncology-type things. They found the best in the world, and that was at Yale University. So, I went to Yale in September or October (2010), and I had the first of two surgeries. In that one, my thyroid was removed. I went back in February or March (2011) and had a second surgery. In my second one, I had a bunch of lymph nodes removed in my neck because they had the disease also. I had a much longer recovery period after that second one.”

Porter said he and his family had support from many sources. His stepmother’s employer provided his private jet to fly them to Yale for the surgeries. “We’re still very grateful for that,” he said.

“While I was up there the first time, I was in fifth grade,” he added. “My fifth-grade teacher got my entire class to write little notes, personal notes, to me.”

Porter described how he felt returning to class after recovering from the surgeries. “When I came back, it was one of the scariest moments of my life,” he recalled. “I remember my parents walked me to my classroom, and I was just holding onto them — I didn’t want to go back in. After my surgeries, I felt extremely isolated. It was one of the worst moments. I remember it vividly, standing outside my classroom, crying, not wanting to go in. But I did go in. ... But those note cards really got me through that first month or so of getting back into a regular life. Obviously I would have a regular life again, but the notes meant so much to me. I still have them.

“The first couple of years of middle school were really bad,” he said. “Everyone was asking me what exactly happened because I had a massive scar on my neck.” During this time, Porter had routine checkups, blood work, etc. Because he has no thyroid, Porter takes a thyroid supplement every day.

When he was in the eighth grade, his parents were approached by the National Institutes of Health in Maryland about him participating in a research study.

“At first I said, ‘What the heck! No! I don’t want to participate in that!’” he said. “But then I ended up doing it. ... They told me when I went up there the first time that it didn’t matter what my parents said, it was up to me whether I wanted to be in it. All I said was, I was willing to be in it but I wanted as normal a life as I possibly can. So they accommodated me.

“I was actually the first one in that entire research study. ... I flew up there every week for about a month, and then it turned into every two weeks, then every three weeks, then once a month. Right now, for the past three years, it’s been every three months.”

Participating in the study has been a tremendous opportunity for the young man. “Dealing with nurses and doctors of this degree really led me to my passion in the sciences and psychology and genetics, which is what I want to go into with my life,” Porter said. “After I originally started that study, I was asked to be on another study with a drug trial for cabozantinib. It’s called a kinase inhibitor. The protein that my cancer is located is called the ret protein, and the region of the protein my cancer is in, the MEN 2B, is called the kinase region. The ret protein mutates and starts spouting out excessive amounts of all these things the cell needs to grow. That’s why it grows and goes through mitosis and makes more cells that are cancerous. What the drug does is, it stops that protein from spouting out excessive amounts. It doesn’t get rid of the cancer, it keeps it from growing. I’ve had amazing results so far on the drug.”

Porter looked back at what he’s experienced and said, “I think that I’ve turned a bad thing into a good thing. What I’ve been doing the past few times I’ve gone up there (NIH in Maryland), I asked the people up there to set up these meetings with scientists, psychologists, geneticists, and I get to go to their labs sometimes, meet them and see what they do. It’s all extremely interesting to me. I sort of get hands-on experience by doing this.

“My main passion is genetics, and what I would like to do is look at genetic cancers, go in there and see what exactly causes them to be passed down and look at how they get turned on,” he said. Strangely enough, Porter said that while MEN 2B is genetic, family members who have been tested do not have the gene. “It started with me,” he said.

Porter has applied for an internship with NIH for the summer. Aside from that, he’s very involved in Young Life, a Christian ministry that reaches out to middle school, high school and college-aged kids. He plans to go to college and study psychology and genetics.

Porter has some advice for other youth who are facing the same situation he did. “I would say, it seems like the end of the world, a punch in the face, but it’s not. I have friends now who don’t even know I have cancer. It’s how you look at it. You know — punch cancer back in the face! I’m healthy and I’m going to stay that way, hopefully.”

According to the National Institutes of Health website at www.nih.gov, multiple endocrine neoplasia is a group of disorders that affect the body’s network of hormone-producing glands (the endocrine system). Hormones are chemical messengers that travel through the bloodstream and regulate the function of cells and tissues throughout the body. Multiple endocrine neoplasia typically involves tumors (neoplasia) in at least two endocrine glands; tumors can also develop in other organs and tissues. These growths can be noncancerous (benign) or cancerous (malignant). If the tumors become cancerous, the condition can be life-threatening.

The major forms of multiple endocrine neoplasia are called type 1, type 2 and type 4. These types are distinguished by the genes involved, the types of hormones made, and the characteristic signs and symptoms.

MEN is one of 7,000 rare diseases and disorders that combined affect 1 in 10 Americans — 30 million individuals — more than half of whom are children. People with rare diseases have tremendous unmet needs, including misdiagnosis, a long time to finally receive a correct diagnosis, and when they do, 95 percent of these conditions have no treatment with zero cures. Any disease, disorder, illness or condition affecting fewer than 200,000 people in the United States is considered rare.

What: Multiple Endocrine Neoplasia Type 2B