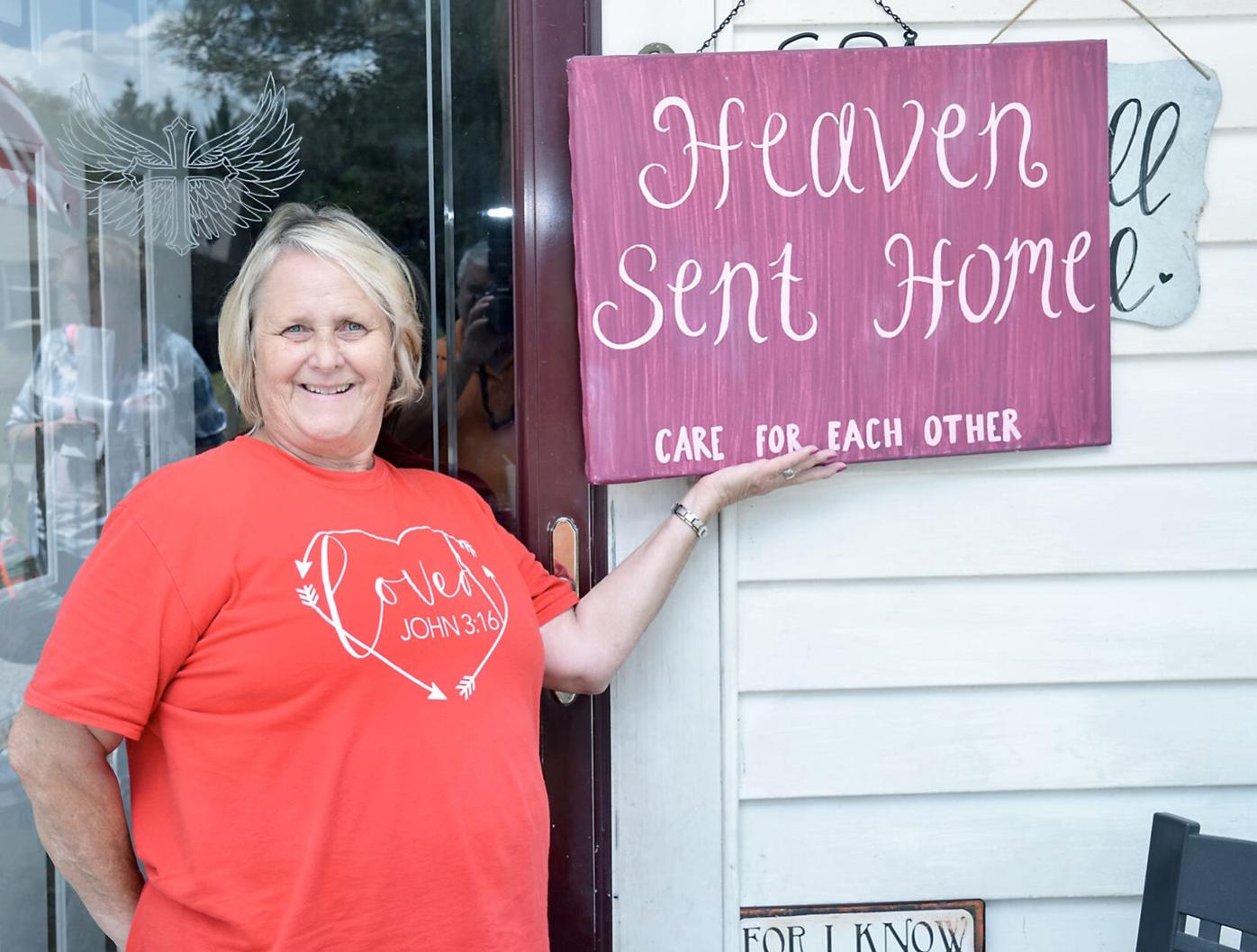 Cathy Potter stands at the front door of her home, where she operates a women's shelter. She is currently preparing for an auction to raise funds for the shelter. 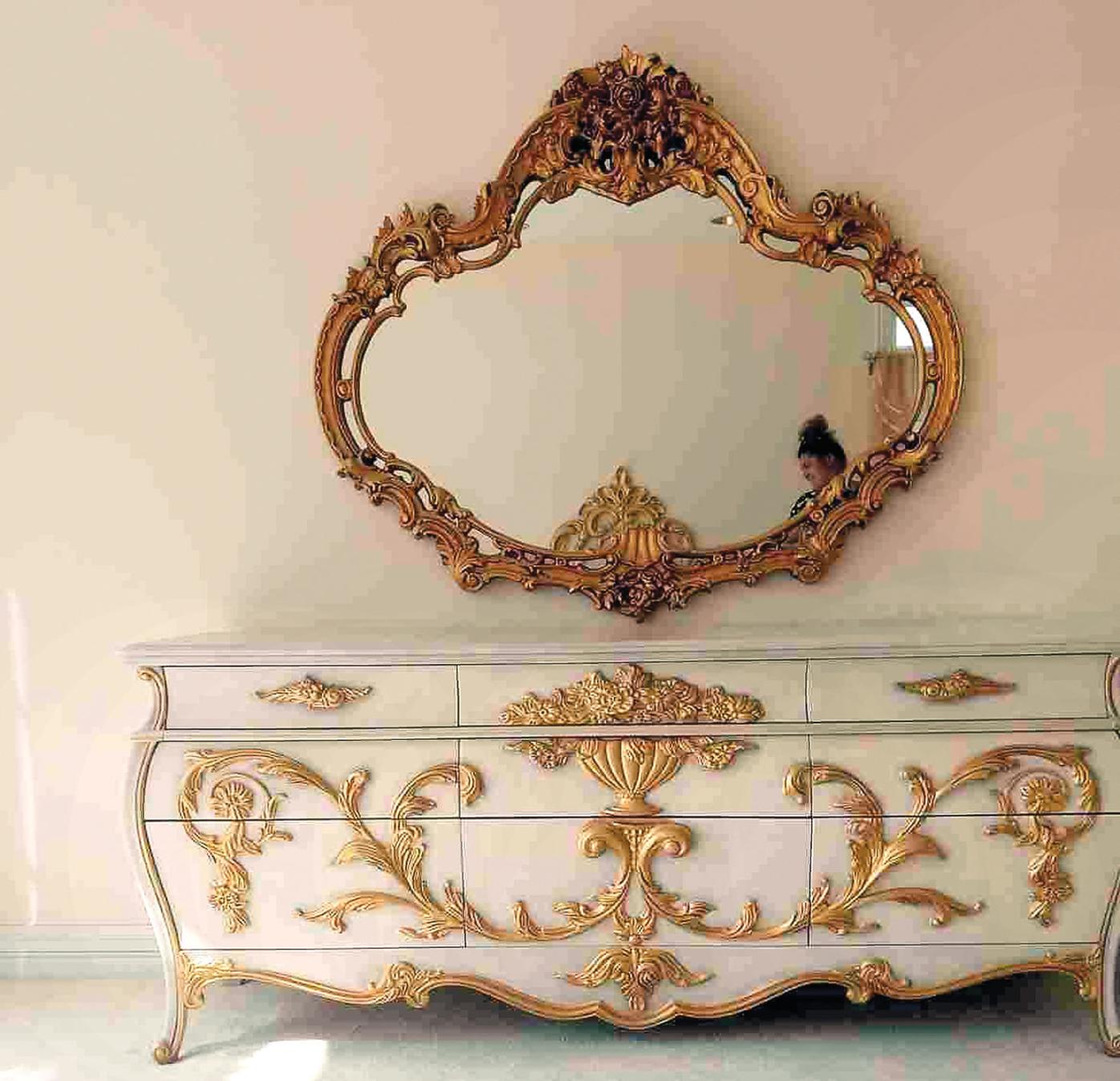 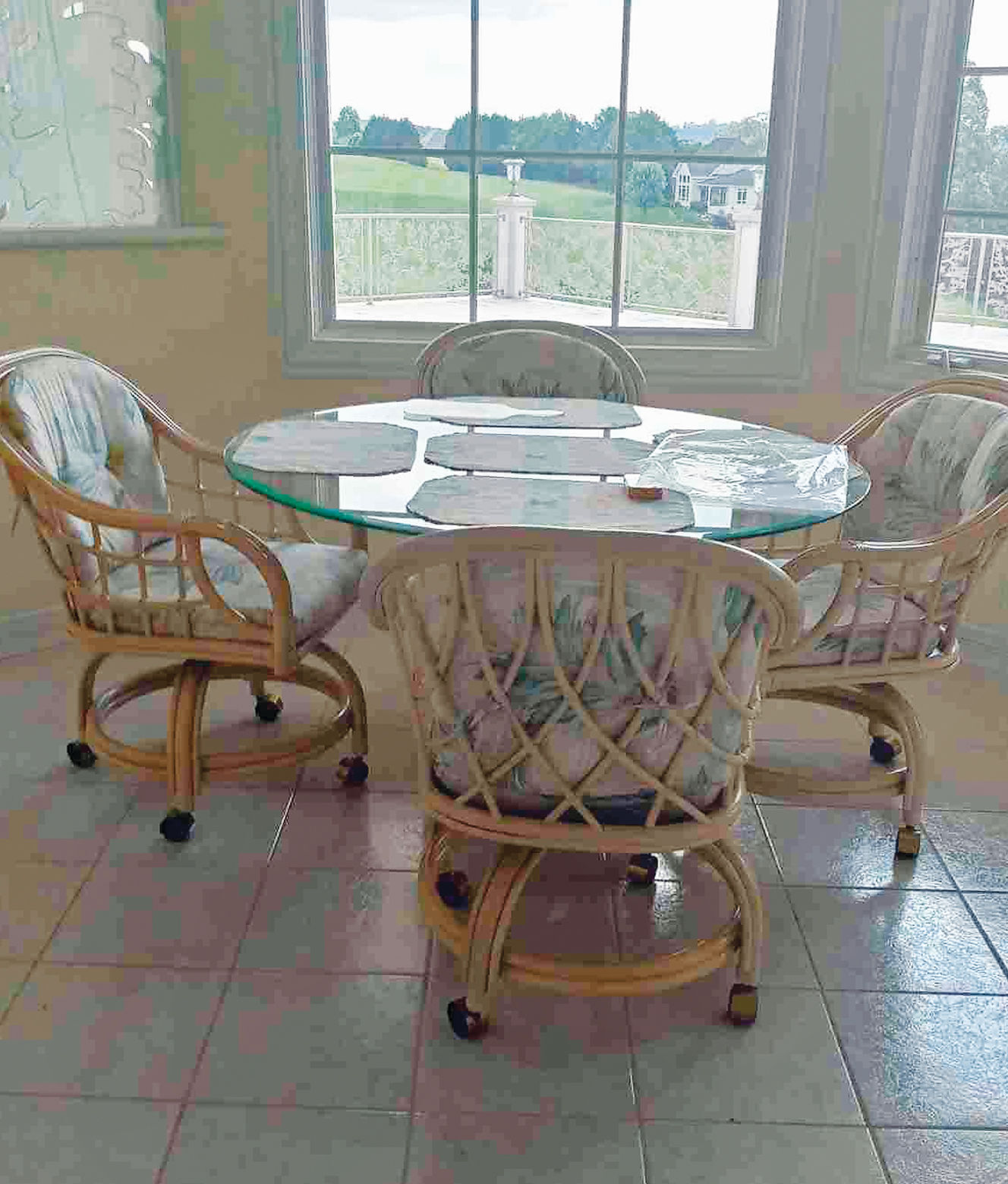 A glass table and chairs are among the items to be auctioned off Aug. 6 in Maryville to benefit Heaven Sent Home, a women's shelter in Maryville. 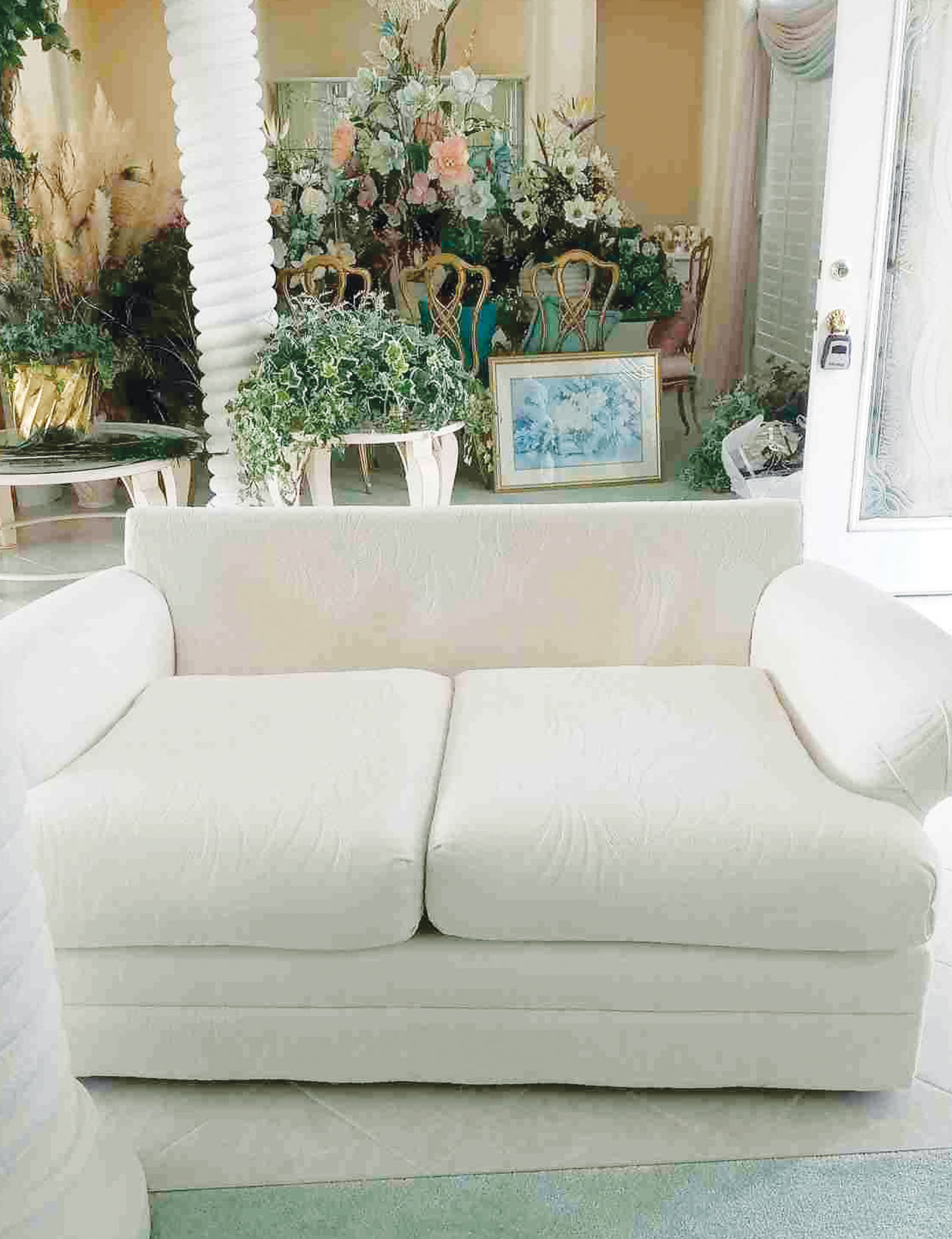 A white couch and loveseat will go home with the highest bidders in the Aug. 6 auction. 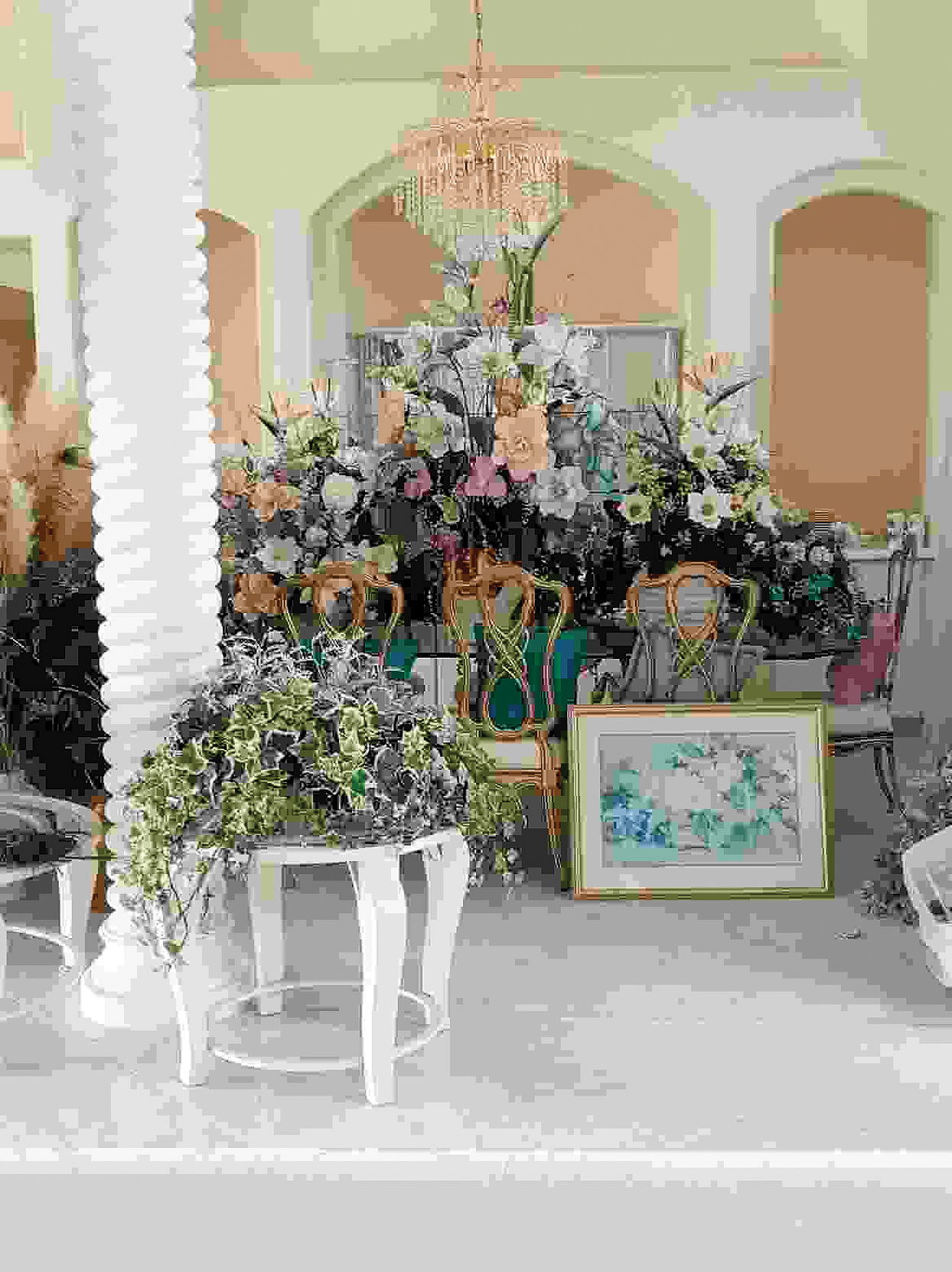 The estate of Joseph and Krystyna Lubecki included these floral arrangements, which will be auctioned off. Their daughter Eve Lee donate the items for auction to benefit Heaven Sent Home. 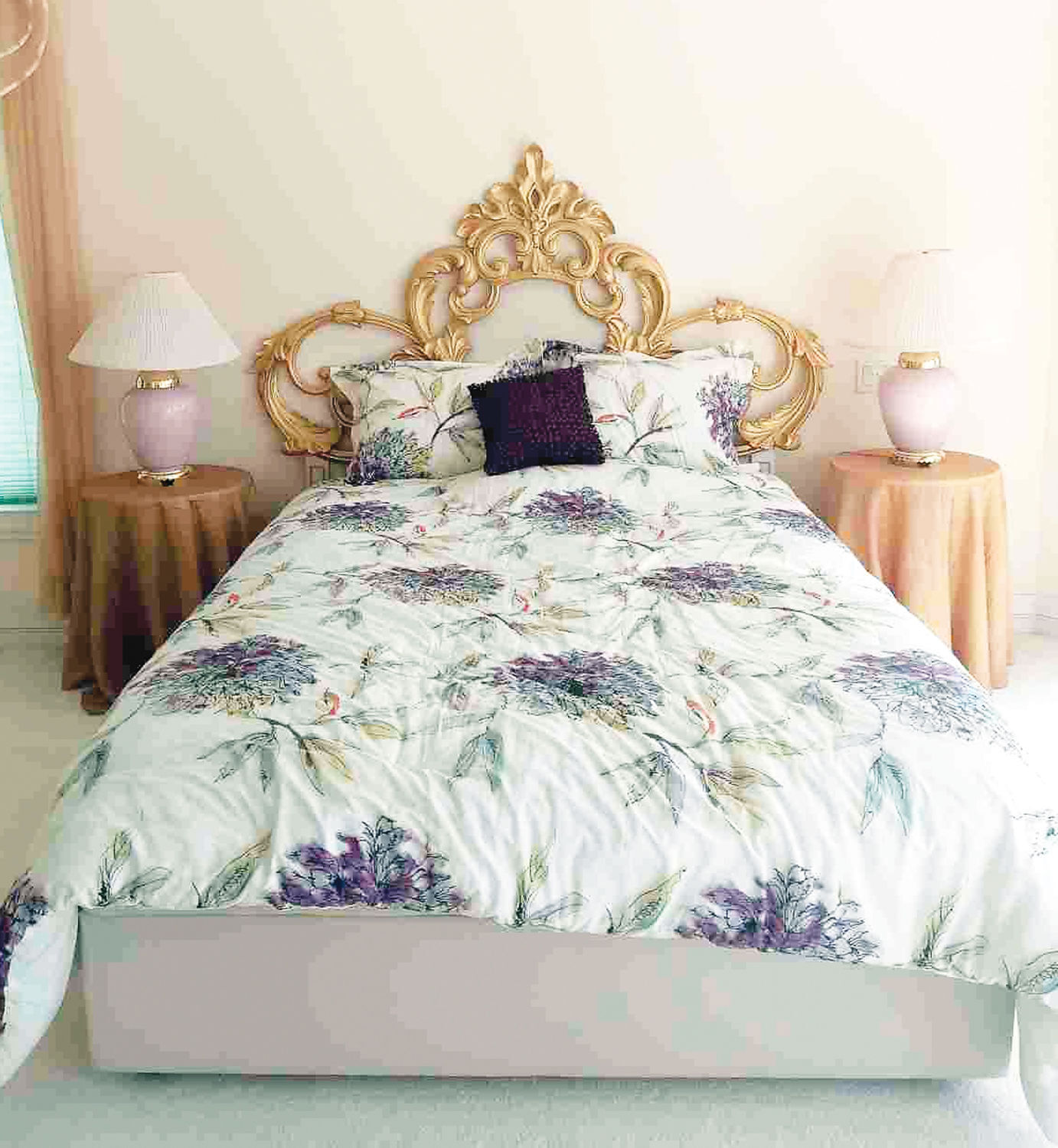 There are three bedroom suites that will be auctioned off on Aug. 6 to benefit Heaven Sent Home.

Cathy Potter stands at the front door of her home, where she operates a women's shelter. She is currently preparing for an auction to raise funds for the shelter.

A glass table and chairs are among the items to be auctioned off Aug. 6 in Maryville to benefit Heaven Sent Home, a women's shelter in Maryville.

A white couch and loveseat will go home with the highest bidders in the Aug. 6 auction.

The estate of Joseph and Krystyna Lubecki included these floral arrangements, which will be auctioned off. Their daughter Eve Lee donate the items for auction to benefit Heaven Sent Home.

There are three bedroom suites that will be auctioned off on Aug. 6 to benefit Heaven Sent Home.

It's been more than 20 years since Blount County resident Cathy Potter made the decision to do more than take notice of homelessness that's all around her.

Potter, back in 1999, started a homeless feeding program on the streets of Knoxville, cooking the food at her Maryville restaurant, Potter's Country Kitchen, and then taking it to those doing without.

"Used to be, when I was feeding on the streets, I knew the homeless people," she said. "Every week it was pretty much the same people. Now when I go once per month, we see a new crowd, people who rotate around from place to place. They are payday-to-payday people who can't make it. I go at the end of the month because I know they will be hungry. Money has run out."

She also handed out clothing to those living on the streets. They were served a hot meal and given a sacked one to take with them.

It's been a continuous ministry for Potter, who later opened Heaven Sent Home, an emergency women's shelter in Maryville. She took in her first female resident on Jan. 8, 2003. Today, there are 13 such temporary guests in residence, each with a different story of how they ended up here.

For some, a stint in jail rendered them without family support or anywhere to go upon release. Others battled drug and/or alcohol abuse and ended up penniless. Still others relied on two wage earners to pay the bills and then lost that partner, leaving them unable to rise above the monthly bills.

"God laid it on my heart to open the shelter for women while I was running the restaurant," Potter said. "I said, 'no, no, no, I can't do that. I am feeding and clothing people on the streets and have the restaurant.'"

That excuse didn't work, Potter said. She owned a home in Maryville so she got the renters out and renovated. Less than three months later, that first resident was housed in safety.

Hundreds have been helped through this ministry. Potter said she can have up to 16 residents at one time, but prefers no more than a dozen. Some of the women who end up here have children, and they are welcome, too.

For instance, Potter has a box truck that now sits idle because it needs mechanical work. She said it might end up costing $2,000, which this ministry doesn't have.

But as she tells it, situations like this get solved through faith. She said just recently, a woman from Knoxville donated rooms full of furniture to Heaven Sent Home from her parents' estate. Potter asked if she could auction it off to help pay for the box truck repairs and updates at the shelter. Eve Lee, the donator, said yes.

That auction is set to take place Friday, Aug. 6, at 2438 E. Broadway Ave., a vacant lot near Stevenson Tire. The auction begins at 7 p.m. and will be outdoors under a tent.

The items up for auction will include a bedroom suite made in Italy and shipped here. There is a glass dining room table that measures 16 feet in length. Floral arrangements, curio cabinets, couch and love seat, outdoor furniture and other bedroom furniture is part of this huge event. There's even a tanning bed.

The event will be led by Sheila Hall and Jim Allen.

This is the biggest estate that has ever been donated to Heaven Sent Home, Potter said. She is hoping to make enough money for the truck repairs and some work on the house.

She is quick to point out that even the box truck she has was donated, by a local pastor. When Sandy's Lingerie closed recently, the owner gave Potter some storage building materials.

"That is how God works," she said. "In the last two years, God has poured it out. He just pours it out."

Potter said she is fortunate for the many partnerships she has formed over the years, including one with Helen Ross McNabb Center here in Maryville. The agency provides intake for the women coming into Heaven Sent Home. Helen Ross McNabb makes an assessment and assigns each shelter resident with a case manager who individualizes a treatment plan to get them successfully re-entered back into society.

That can include things like affordable housing through the Rapid Rehousing program, said Shannon Dow, director of Helen Ross McNabb here in Blount County. That program is funded by grants from HUD (U.S. Housing and Urban Development) and also THDA (Tennessee Housing Development Agency).

She said this partnership with Heaven Sent Home was created more than four years ago. Teaming up has allowed Heaven Sent Home clients to get help with transportation and finding stable employment, Dow explained. Potter has definitely worked hard to make it all successful, she added.

"She is very much an asset to our community," Dow said of Potter. "Her passion for helping those living in homelessness shines through."

In addition to running the shelter, Potter works for Maryville City Schools, serving in the cafeteria at Coulter Grove Intermediate. She's retired twice, she said, adding this will be her last year.

There are times when Potter said she gets frustrated, tired and doubtful of making the impact she strives for. Reassurance isn't far behind.

"When that happens, God sends me someone from the past," Potter said. "They will just show up and tell me how much they appreciate what's been done for them. I always tell them, 'God did this. I didn't do anything.' He gives them an opportunity. What they do with it is up to them."

The estate sale will feature lots of furniture. It will be cash or check only. Heaven Sent Home is an emergency women's shelter in Maryville operated by Cathy Potter. It opened in 2003. Proceeds will be used to repair a box truck and for shelter upkeep.