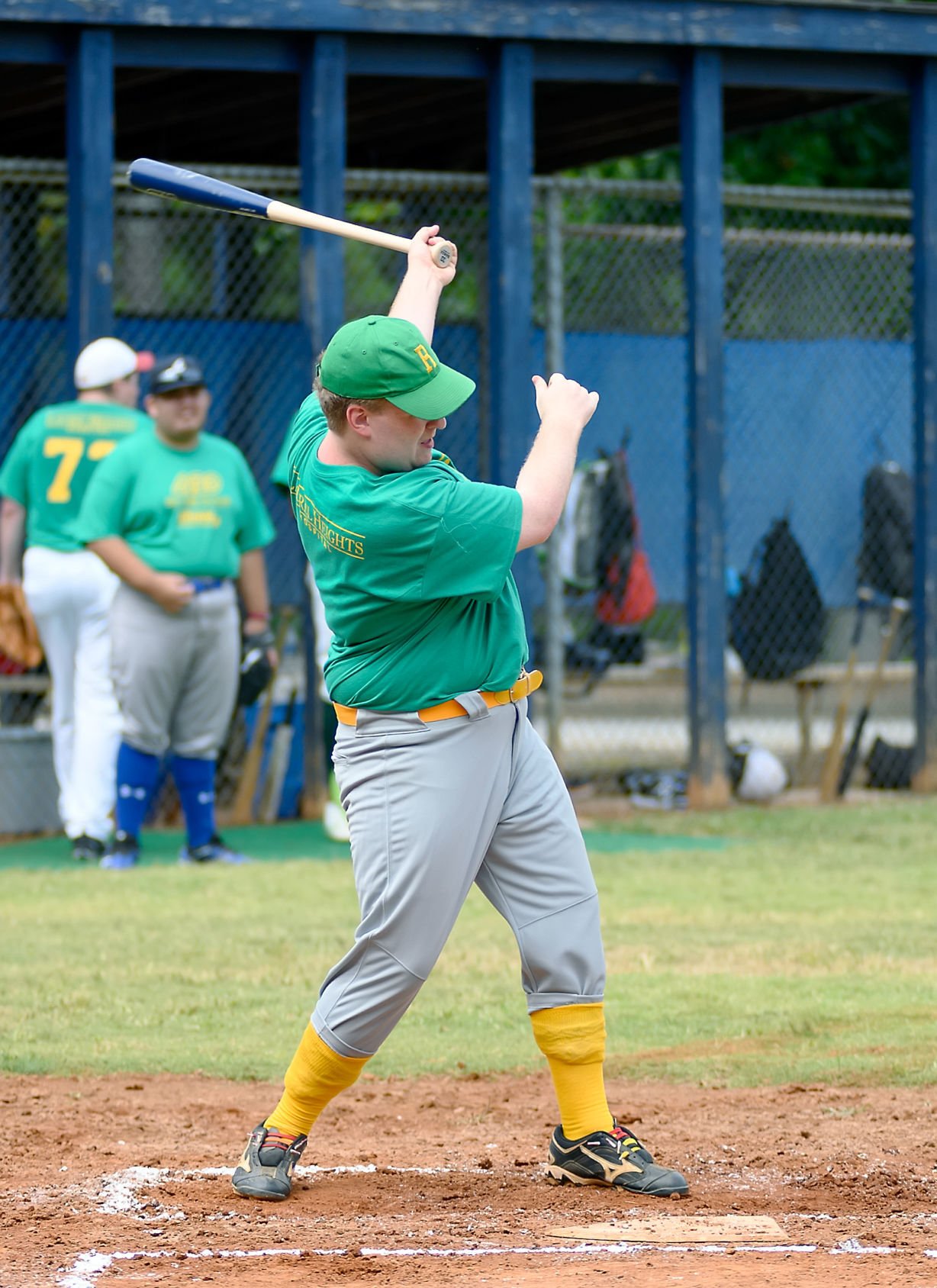 A player with Alternative Baseball Organization takes a swing during a game back in 2019. Duncan Taylor, the director of ABO, wants to bring the league here to Blount County to serve those with autism and other disabilities. 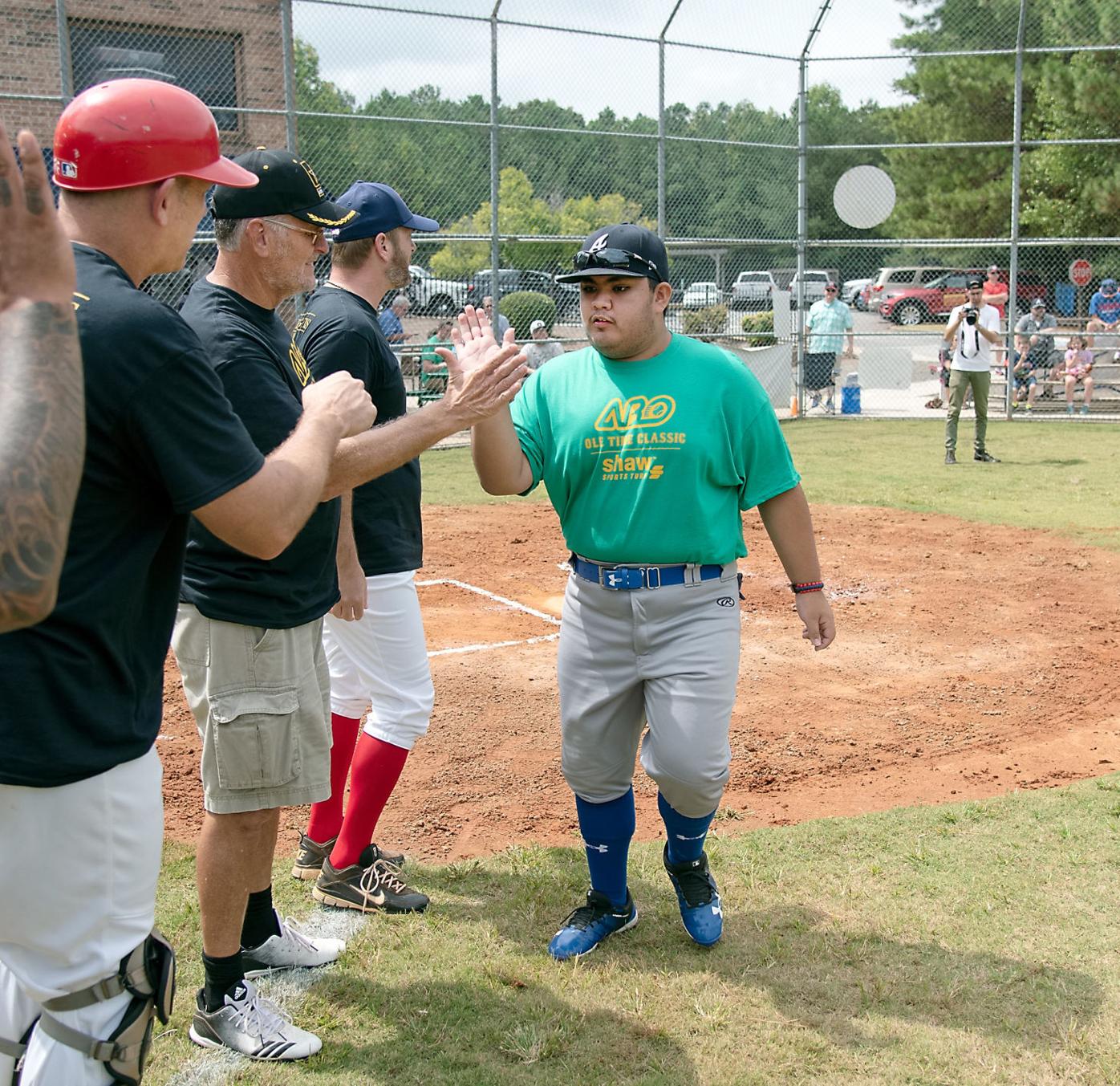 A player with Alternative Baseball Organization gives a high-five after scoring a run in a game played back in 2019 against former members of Major League Baseball. ABO’s mission is to provide the experience of team sports and success for those with autism and other disabilities. 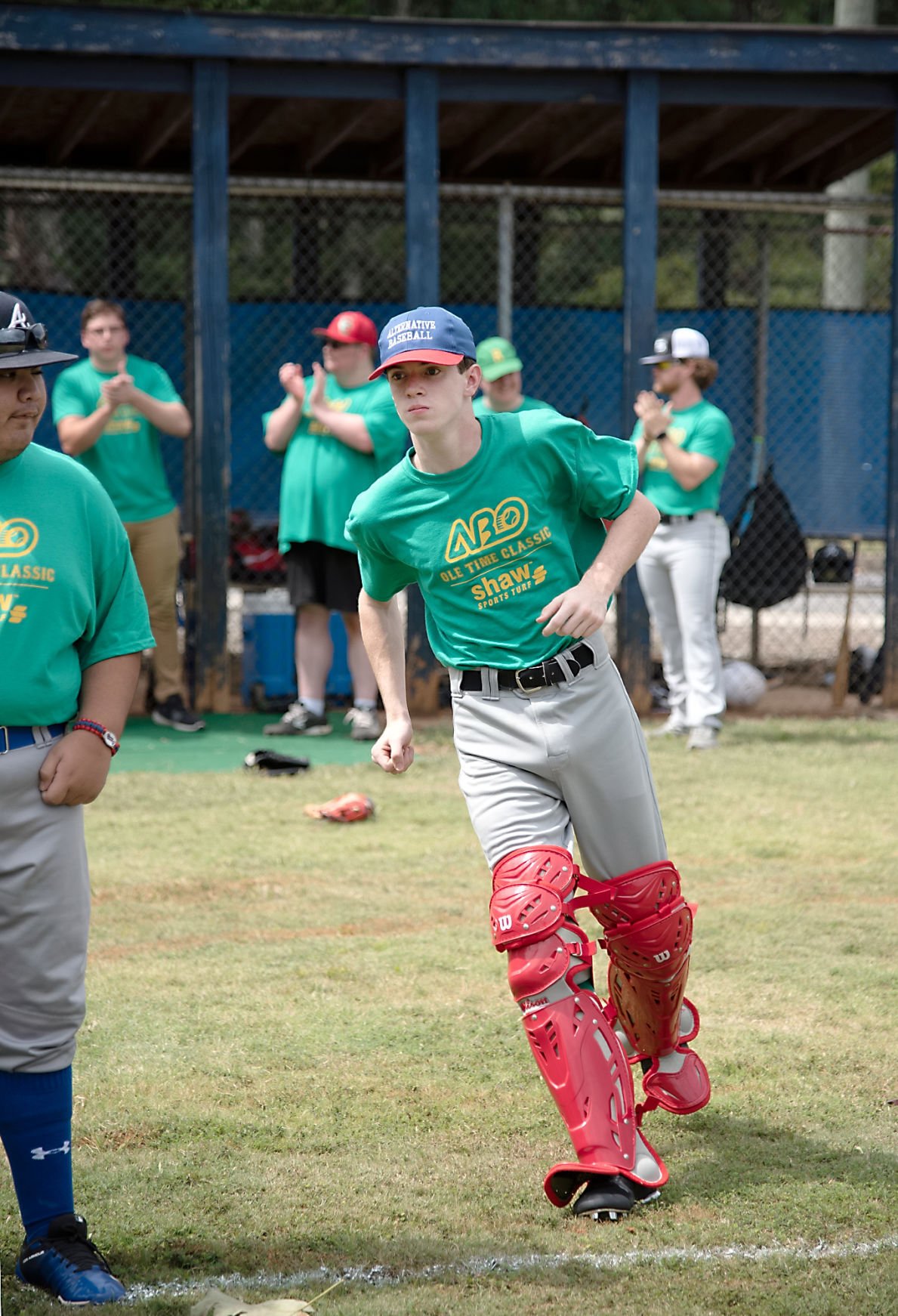 Players with the Alternative Baseball Organization get the opportunity to compete, something many of them have not had the chance to do because of their disabilities. 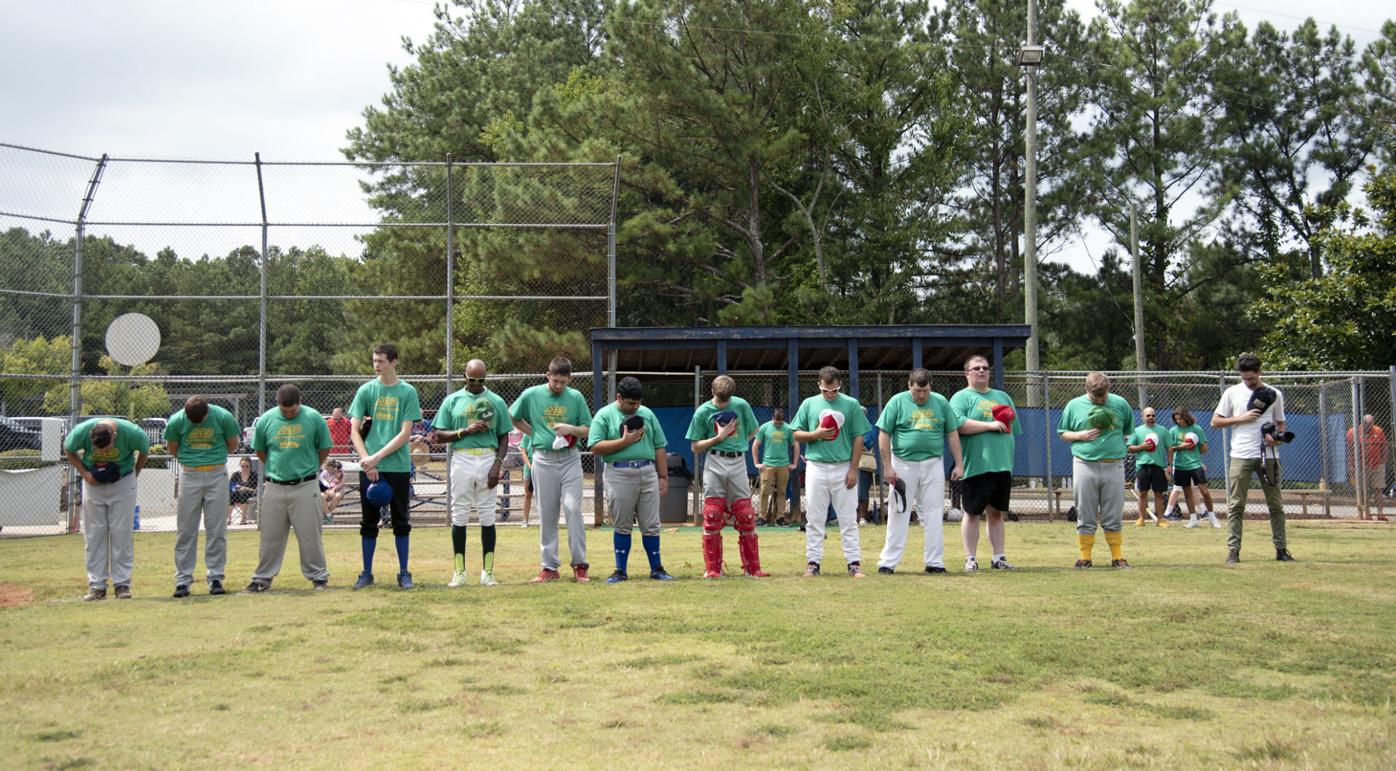 Players line up before a game. The Alternative Baseball Organization started in Georgia and its founder wants to bring the action here. Volunteer coaches, managers and players are needed.

A player with Alternative Baseball Organization takes a swing during a game back in 2019. Duncan Taylor, the director of ABO, wants to bring the league here to Blount County to serve those with autism and other disabilities.

A player with Alternative Baseball Organization gives a high-five after scoring a run in a game played back in 2019 against former members of Major League Baseball. ABO’s mission is to provide the experience of team sports and success for those with autism and other disabilities.

Players with the Alternative Baseball Organization get the opportunity to compete, something many of them have not had the chance to do because of their disabilities.

Players line up before a game. The Alternative Baseball Organization started in Georgia and its founder wants to bring the action here. Volunteer coaches, managers and players are needed.

A 25-year-old Dallas, Georgia, man who absolutely loves the game of baseball may be coming to our town soon and bringing his passion for the game, along with his newly formed league.

Taylor Duncan has been on a mission to spread the word about his Alternative Baseball Organization, which has gotten lots of attention from the national media, including from ESPN, CNN and NBC. He started out with five people and himself and has teams now in more than 30 states.

Now, he’s spreading his wings further across the United States in hopes of gaining coaches, players and other volunteers to form a team or teams right here in Blount County. Currently, the closest teams are in Chattanooga and Atlanta.

“I am going to contact every newspaper in the United States,” Duncan said during a recent telephone interview. He said he is conducting as many as 14 interviews in a single day via Zoom and other platforms.

This isn’t a baseball organization like any other. Duncan was diagnosed with autism when he was just 4 and never got the opportunity to play the game. His league is open to those ages 15 and older who have an autism diagnosis, along with those with other disabilities. Male and female players can join.

“I have always been a big fan of the game,” Duncan said. “But I was often denied the chance to play traditional baseball growing up because of the developmental delays when I was younger or because of the negative perceptions I faced as I got older.”

This commissioner and director for Alternative Baseball Organization overcame many of his obstacles with help from his mom, teachers and coaches. He said he wants to be able to provide what many of these kids and adults missed out on.

And while ABO hasn’t been able to play any games since 2019, word continues to get out about this nonprofit sports league. Duncan said while many sports were shut down due to the pandemic, sports reporters were looking for stories to write. Many found Duncan and his mission to provide a competitive sports atmosphere to those diagnosed with autism or other disabilities.

Growth doesn’t stop in a pandemic

When the pandemic forced the temporary shutdown of the program, Duncan began focusing on the 2021 season. He said there may be as many as 70 teams when things resume in spring or summer, depending on how the pandemic and the vaccines progress.

Duncan traveled extensively pre-COVID but the breaks have been put on for months. But he presses on, doing as many interviews as he can on the internet and phone.

“I have done 14 Zoom interviews in one day,” he said. “I was on a call with a television station in Honolulu, Hawaii, one hour and the next I was with a station in Atlanta. It is almost like traveling in your own house.”

Growing up about an hour from Atlanta, Duncan has been a fan of the Atlanta Braves for years. He loves to cheer on the minor league Chattanooga Lookouts, a Double-A affiliate of the Cincinnati Reds. In fact, Duncan’s interest in the sport breaches national boundaries. He follows teams in Japan and also Korea.

He was given a tour of the Knoxville Smokies stadium and wants to return for a game some day.

For the love of the game

All of the managers, coaches, players and others involved in ABO are volunteers and receive no financial compensation. There is no upper age limit for participants. Teams will have the opportunity to travel. Each community team comes up with its own unique name.

The majority of the funding for the programs comes in the way of donations and sponsorships, this director said.

The drive to make this dream a reality stems from Duncan’s own personal experience of being left on the sidelines. He said when students like him aged out of high school, there were not many places for them to go. Isolation is a huge issue, he said.

“Whether you live in a small place, somewhere like Maryville or in large areas like the Bronx or L.A., it is pretty much a universal issue,” Duncan explained. “Once you graduate from high school, the state no longer has to provide services. A lot of these individuals end up being sequestered because there is nothing out there for them where they live.”

Duncan has made great strides in getting the word out. He said he is determined to reach as many communities as possible.

“We want to make sure we are in as many areas as possible to provide this opportunity for others just like myself,” he said. “We all deserve the opportunity to be encouraged to be the best we possible can and be accepted for who we are.”

ABO isn’t just about swinging the bat and outfield catches. Duncan said he has seen players learn the game, but also skills that take them further in life.

The confidence the players gain is then directed in other areas. Duncan said for some of them, that might mean getting a job or learning to drive. They now know with the right encouragement they can be successful, Duncan said.

For Duncan, he’s started college toward a bachelor’s degree in nonprofit business administration at Toccoa Falls College, with a minor in sports management and theology. He completed his first semester with a 4.0 grade-point average.

Because they don’t require modified fields, ABO participants play on high school fields or other locales with Major League dimensions. They also adhere to the same Major League rules of play.

Back in September 2019, members of ABO even got the chance to play a team consisting of former Major Leaguers. Duncan made it clear to them he didn’t want them to hand his players a win. He wanted as real an experience as possible. In the end, Duncan’s team lost 14-1. Lessons learned were taken back to other team members.

When Duncan makes it to Maryville, it will be his first visit, but he said he’s looking forward to meeting members of the community.

“When everything is signed, we’ll celebrate at the nearby Cracker Barrel,” he said.

Alternative Baseball Organization is currently looking for volunteer managers, coaches and players in Blount County to organize teams here. To sign up or for more information, go to alternativebaseball.org.