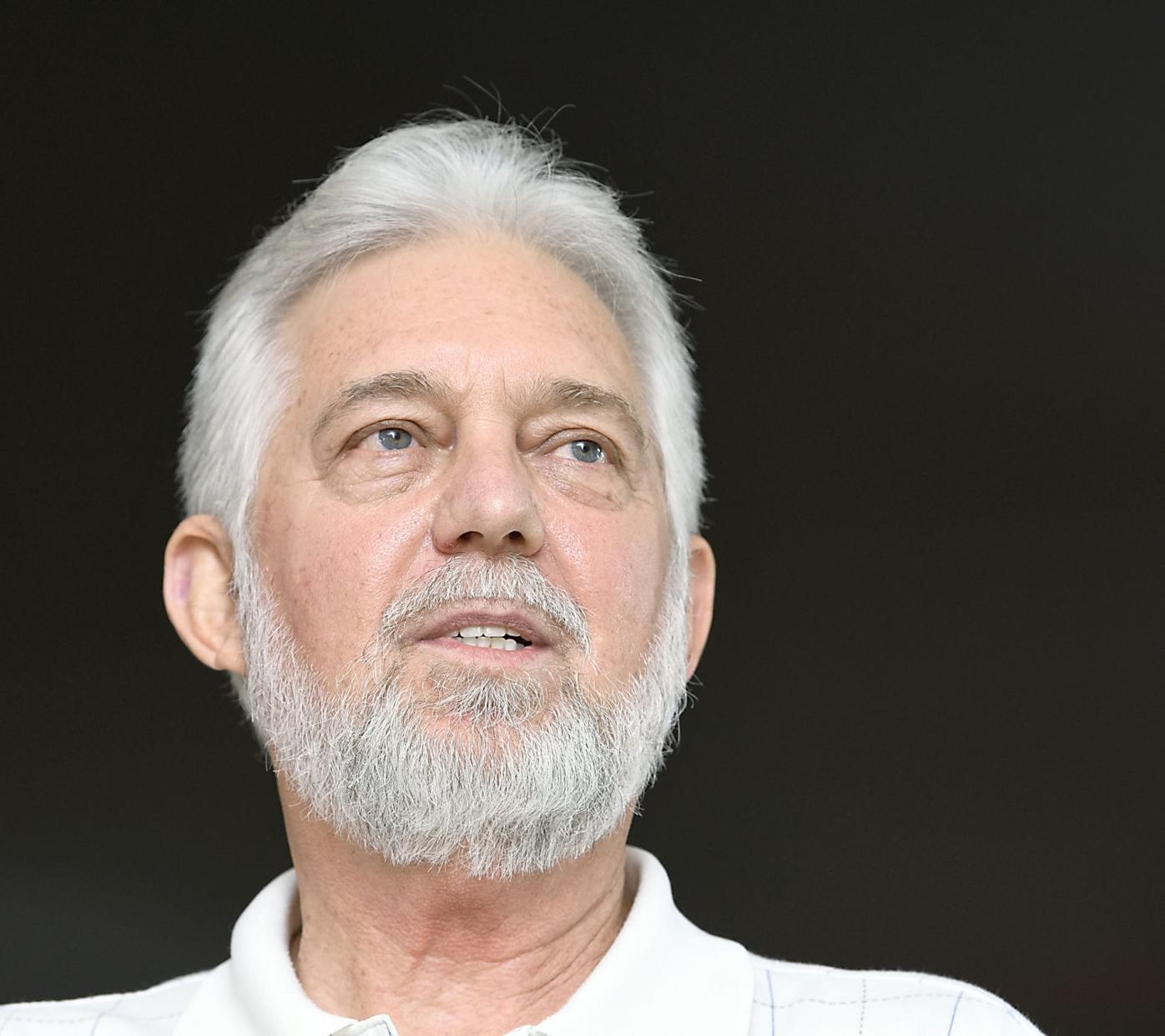 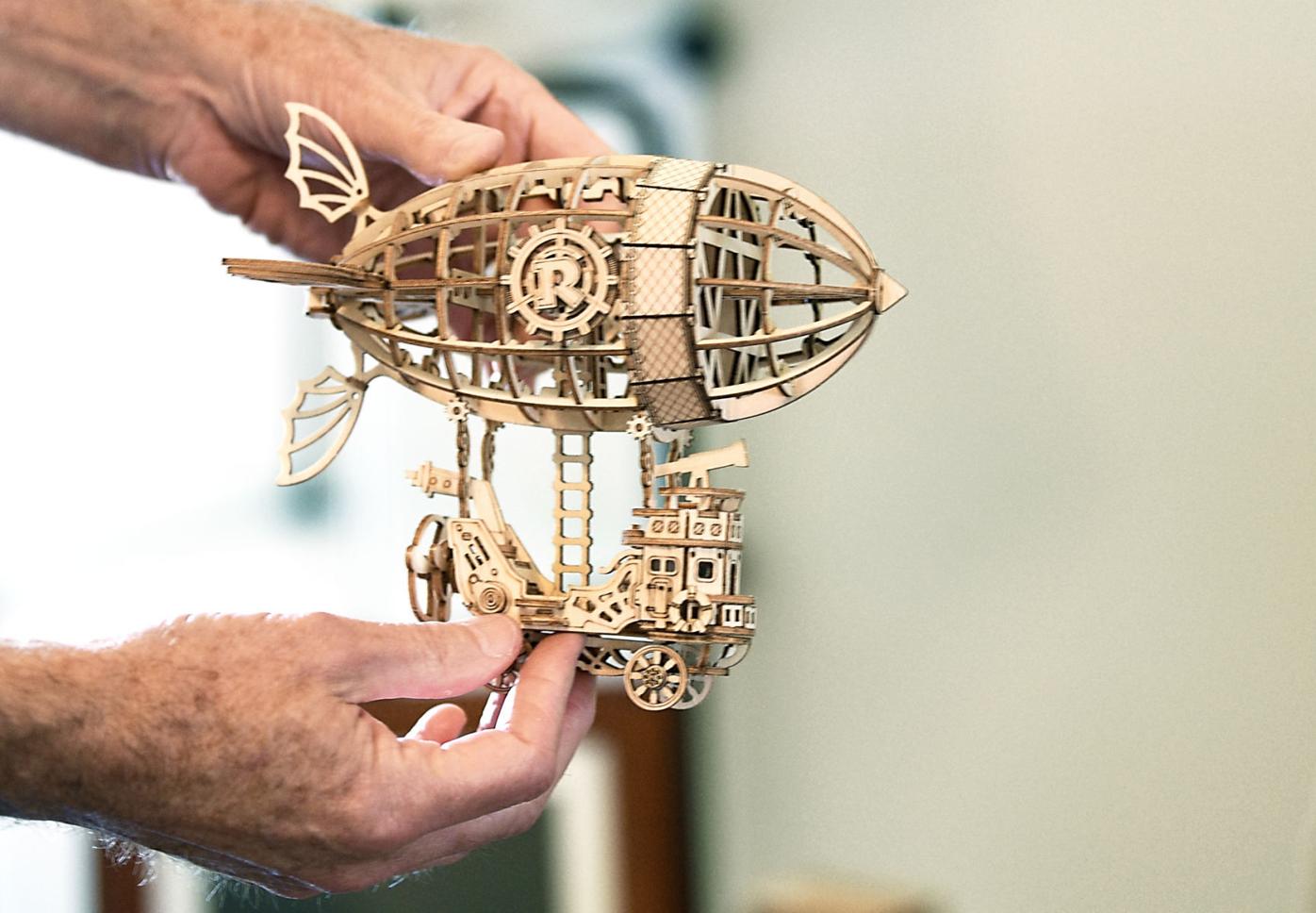 Stanley Swartzel shows an airship, one of many models he built during his time at home during the COVID pandemic. 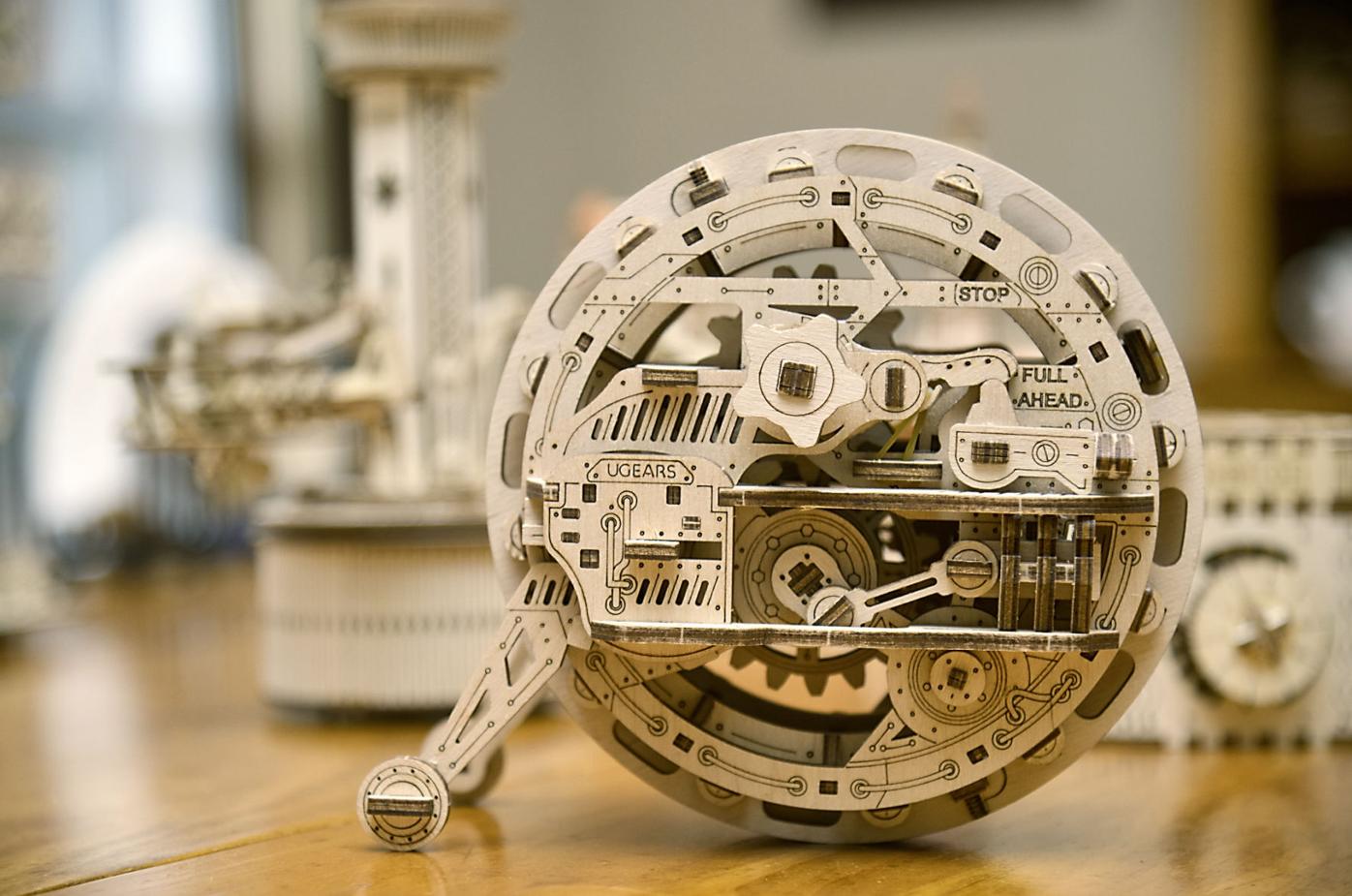 This model built by Stanley Swartzel can be wound up and then released to roll across a flat surface driven by the energy stored in rubber bands. 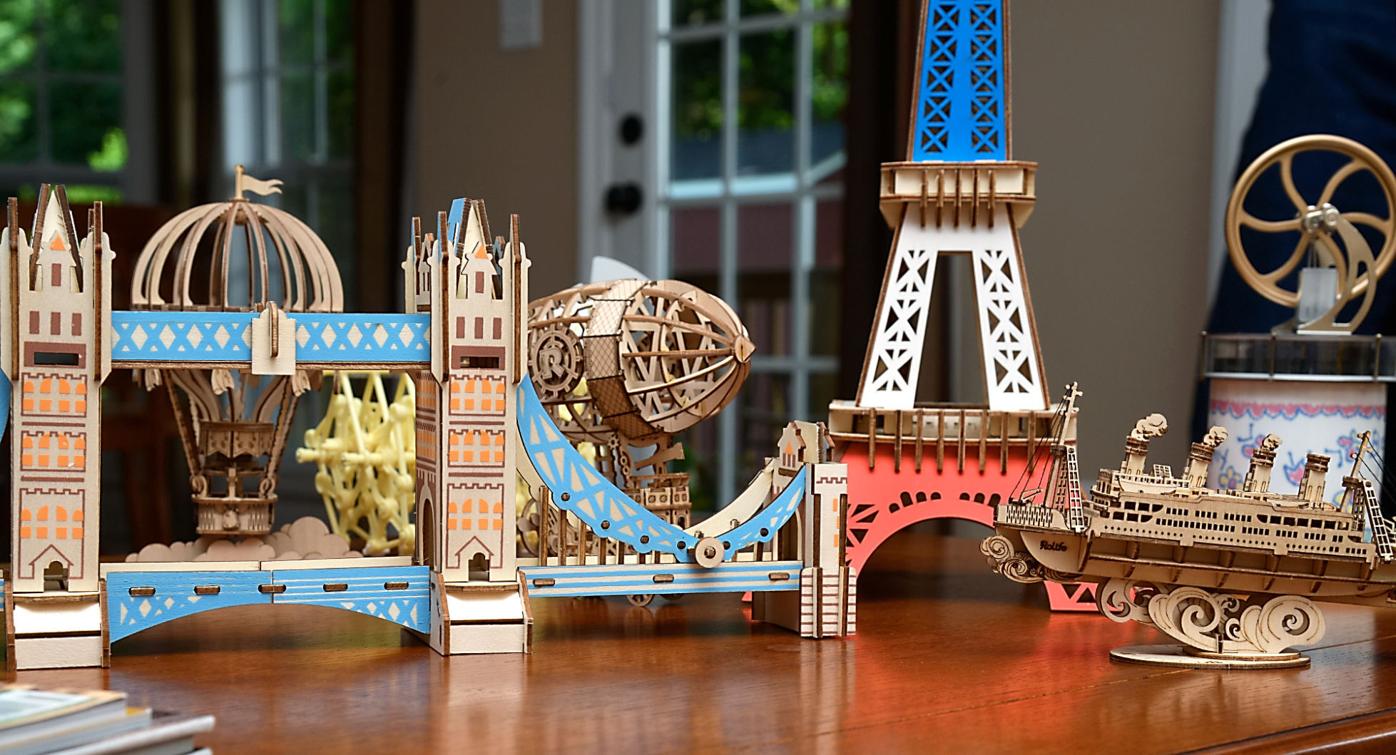 A few of the models Stanley Swartzel built to help occupy his time while at home during the COVID pandemic. 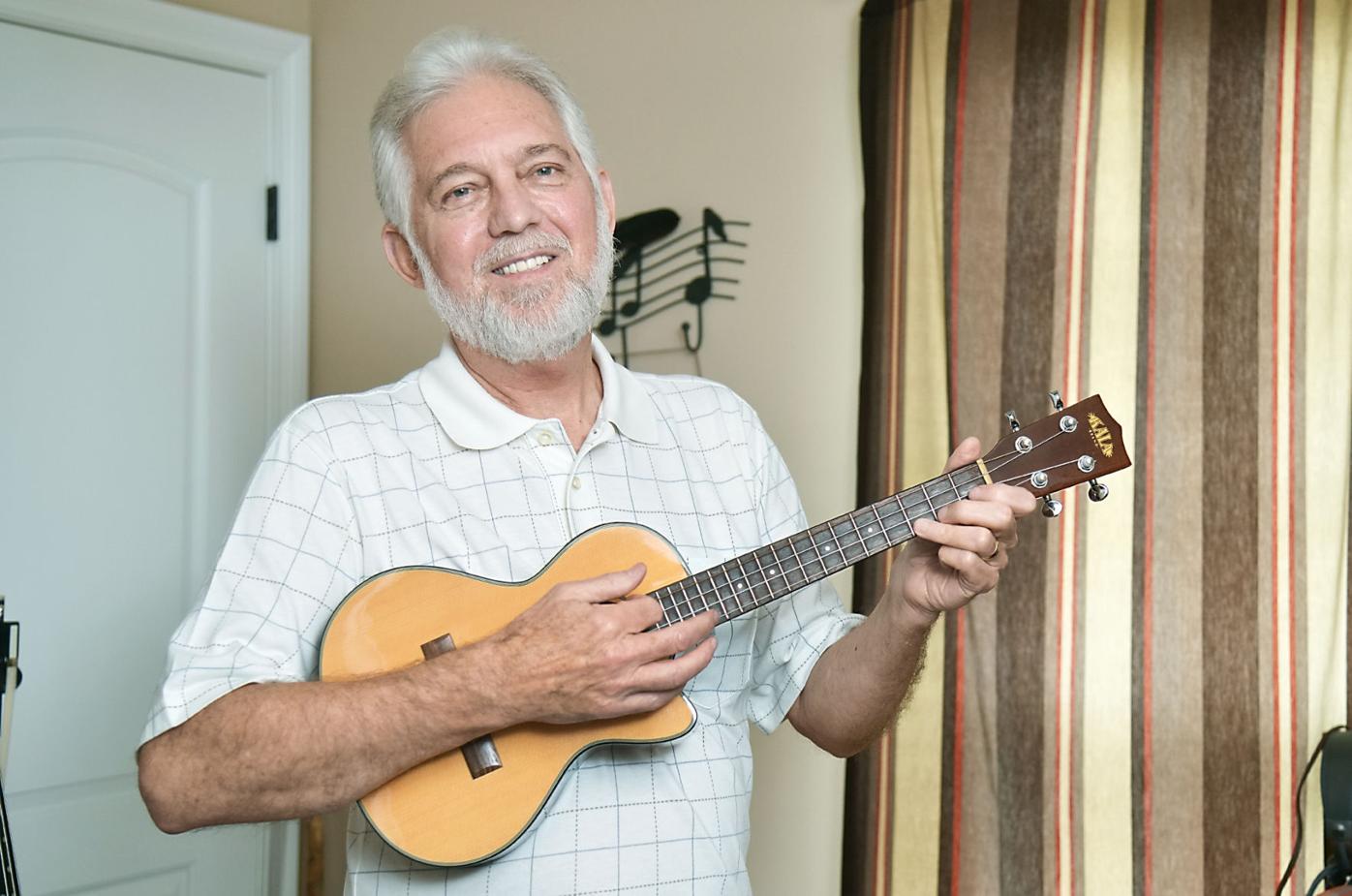 Stanley Swartzel demonstrates the ukulele in his den at his Greenback home.

Members of the Ohana Ukuleleans perform a concert pre-pandemic. 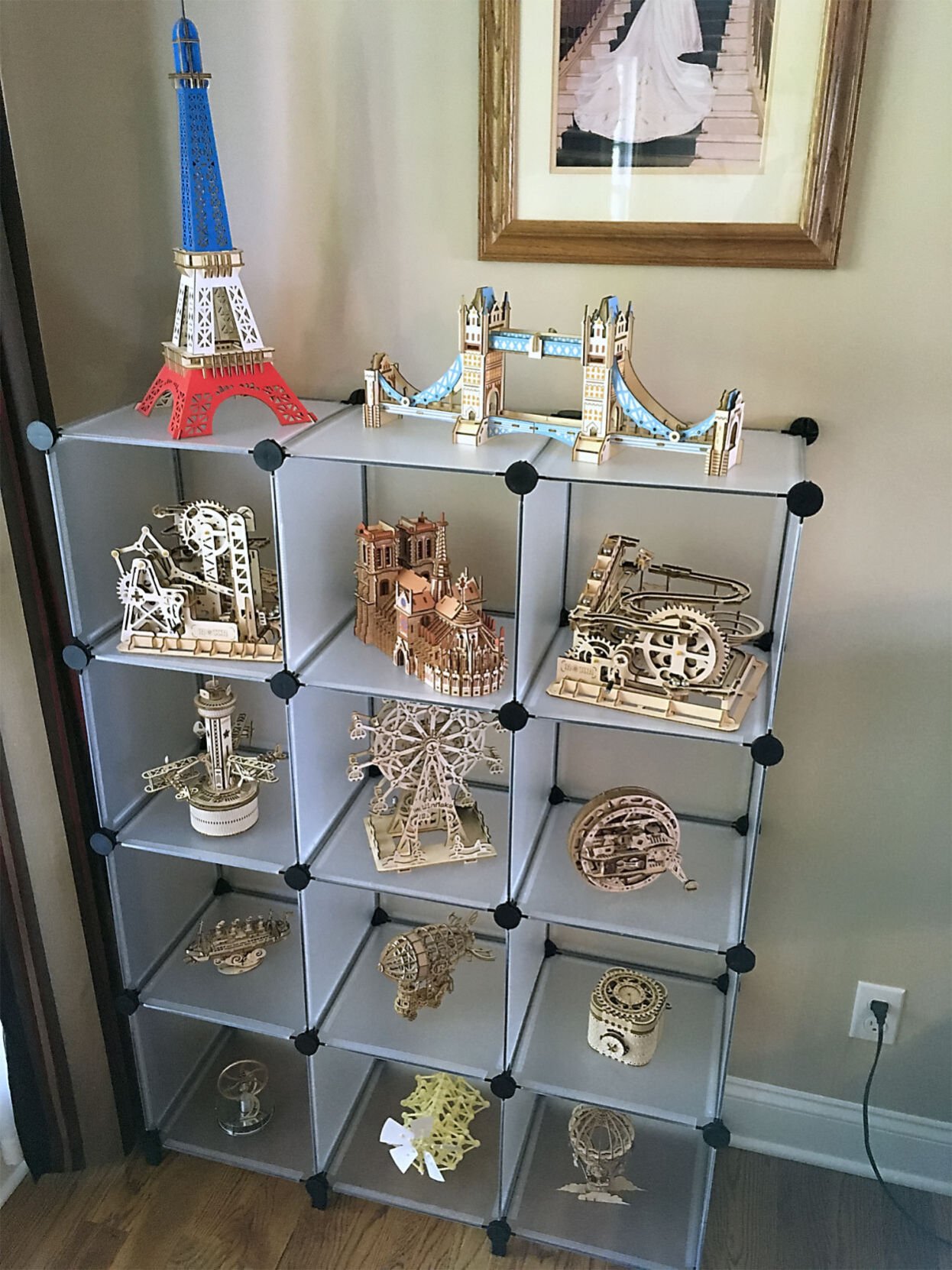 A display of Stanley Swartzel’s wooden puzzles in his home.

Stanley Swartzel shows an airship, one of many models he built during his time at home during the COVID pandemic.

This model built by Stanley Swartzel can be wound up and then released to roll across a flat surface driven by the energy stored in rubber bands.

A few of the models Stanley Swartzel built to help occupy his time while at home during the COVID pandemic.

Stanley Swartzel demonstrates the ukulele in his den at his Greenback home.

Members of the Ohana Ukuleleans perform a concert pre-pandemic.

A display of Stanley Swartzel’s wooden puzzles in his home.

Retirement is the best job ever, said Greenback’s Stanley Swartzel, a man who spent his career as a geologist for both the private sector and the federal government.

He loved to go spelunking as a teen, he recalled, and wife Juanita said she grew up in the Ozarks, a great place to go cave exploring. Stanley would come to see her often as they were dating.

“I am from a large family of 13 kids,” she said. “I always told him, ‘You didn’t come over here to see me, you came to go caving.’ He went through my brothers. Several of them wouldn’t go back with him so he would try the others. I have eight brothers.”

Stanley still has a rock collection; the couple lived in many different places while he worked in California, New Mexico, Oklahoma, Missouri, South Carolina and Mississippi.

He even drove a bus for Greyhound before becoming a geologist. The bus company would lay him off every summer, so he decided to go back to school and get his degree, taking advantage of the GI bill since he served in the Army.

His Army experience would have been much different had he not had one more love — music.

Caving was a definite passion from his youthful days, and so was music. He can thank his dad for that.

“My dad used to go to pawn shops and buy musical instruments and bring them home to me,” he said. “I think the first one I ever got was a harmonica. I just went out into the woods and spent hours learning to play.”

Stanley then moved on to the ukulele. When he was in junior high, this young musician took up the trumpet and alto horn. Then it was on to the French horn and trombone.

It was while he was in high school that Stanley started on the tuba because his band director said he was in need of a player. That turned out to be the best decision he could have made. This was during the Vietnam War and Stanley’s number was about to be called.

Instead of waiting, the North Carolina native decided to enlist, but not before exploring his options. In the end, he joined the Army and auditioned for one of the Army bands. He was selected for the 282nd Army Band in Fort Jackson, South Carolina.

It was a three-year commitment, Stanley said, and he could have been shipped out at any time to fight the enemy. Thankfully, he wasn’t and got an early discharge.

“The best part of my Army experience was getting to go to the U.S. Navy School of Music,” he said. He was allowed to train there for six months.

It was years later that Stanley would earn his degree in geology from the University of South Carolina.

Keeping busy in a pandemic

A man with many interests is sure to get bored during a pandemic, and that is what happened to Stanley. He took up building wooden puzzles — the kind that are made from thin pieces of wood and connect without the use of glue. He started ordering them online and found an amazing assortment.

One has a music box inside; one is actually a box with a combination needed in order to be opened. There are some that have lots of working parts as gears, cranks, marbles and rubber bands help them move across the floor on their own. Some are solar powered.

Each has up to 300 pieces, many almost unmanageable for those with little patience and large hands. The completed ones are now displayed in his living room.

“I just thought they were cool,” Stanley said. “It blows my mind how people can come up with ideas for them.”

Juanita said she helped him on the first one, but Stanley has since taken over the building all by himself. He’s learned a few things about himself in the process.

“I am a patient person with people but not inanimate objects,” he said.

But his interests don’t stop there. Stanley and Juanita attend a weekly meeting of The Breakfast Club at T.C.’s Grill in Maryville. A couple from Maryville Church of Christ, where the Swartzels also attend, first invited them.

On a good day, there might be 50 or more people who show up; attendance is building back up since vaccinations against COVID have increased. Stanley said he has invited new people from his neighborhood. The weekly sessions have only grown over the years.

But perhaps the most gratifying use of his time is as a music instructor, teaching all ages to play the ukulele. That also started at his church, but has expanded to include others.

The musicians go to nursing homes and other places to bring joy and an opportunity to sing along.

The group now can play close to 100 songs and they practice each Thursday. When they couldn’t meet due to COVID, Stanley sent them songs to learn at home.

“Anybody can learn to play the ukulele,” he said. “Most of those in the group have never played an instrument.”

They call themselves Ohana Ukuleleans, a Hawaiian word meaning “family.”

On the wall where Stanley keeps his instruments is a newspaper article from a decade ago about his talent. One of his favorite instruments, a washtub bass, sits in the corner. He’s played it at weddings and funerals.

The banjo is also one of Stanley’s favorite stringed instruments, his wife said. “But the one he has loved the most is the washtub bass.”

It seems an insatiable curiosity and a determination to succeed have served this retired geologist well over the years.

“I wanted to play the cello during COVID, so I did that,” he said. “Then I got an electric guitar.”

Now that the pandemic has subsided, Stanley said he isn’t sure how many more wooden puzzles he will get completed now. Musical engagements are coming back and ukulele rehearsals are getting back on track.

There are still musical instruments out there he hasn’t learned to play, yet.