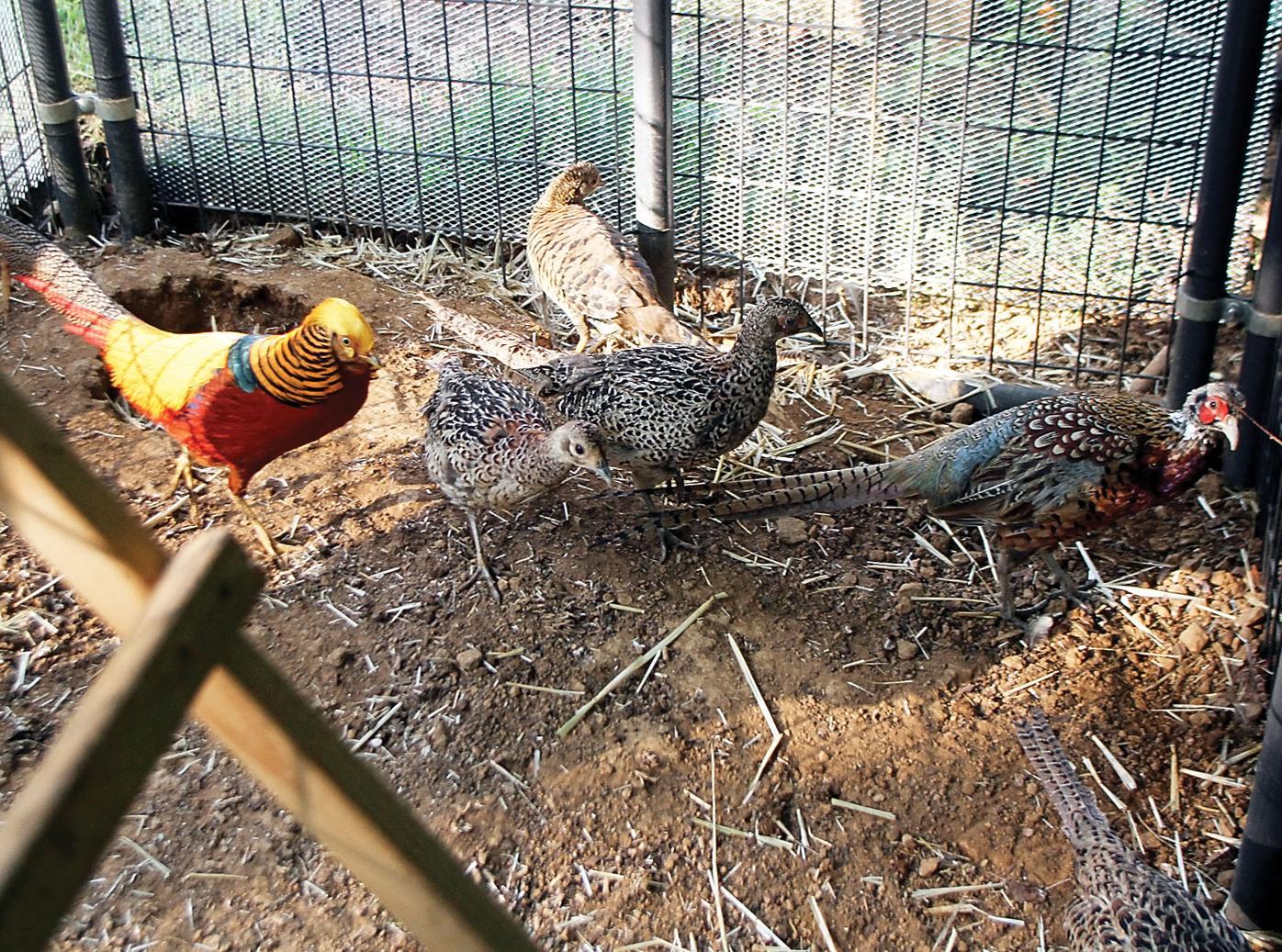 Dusken Sledge and wife, Jessi, own Wake Robin Homestead in Seymour. They raise fruits, vegetables, herbs and also chickens, quails and pheasants. The couple sells their crops to local restaurants. 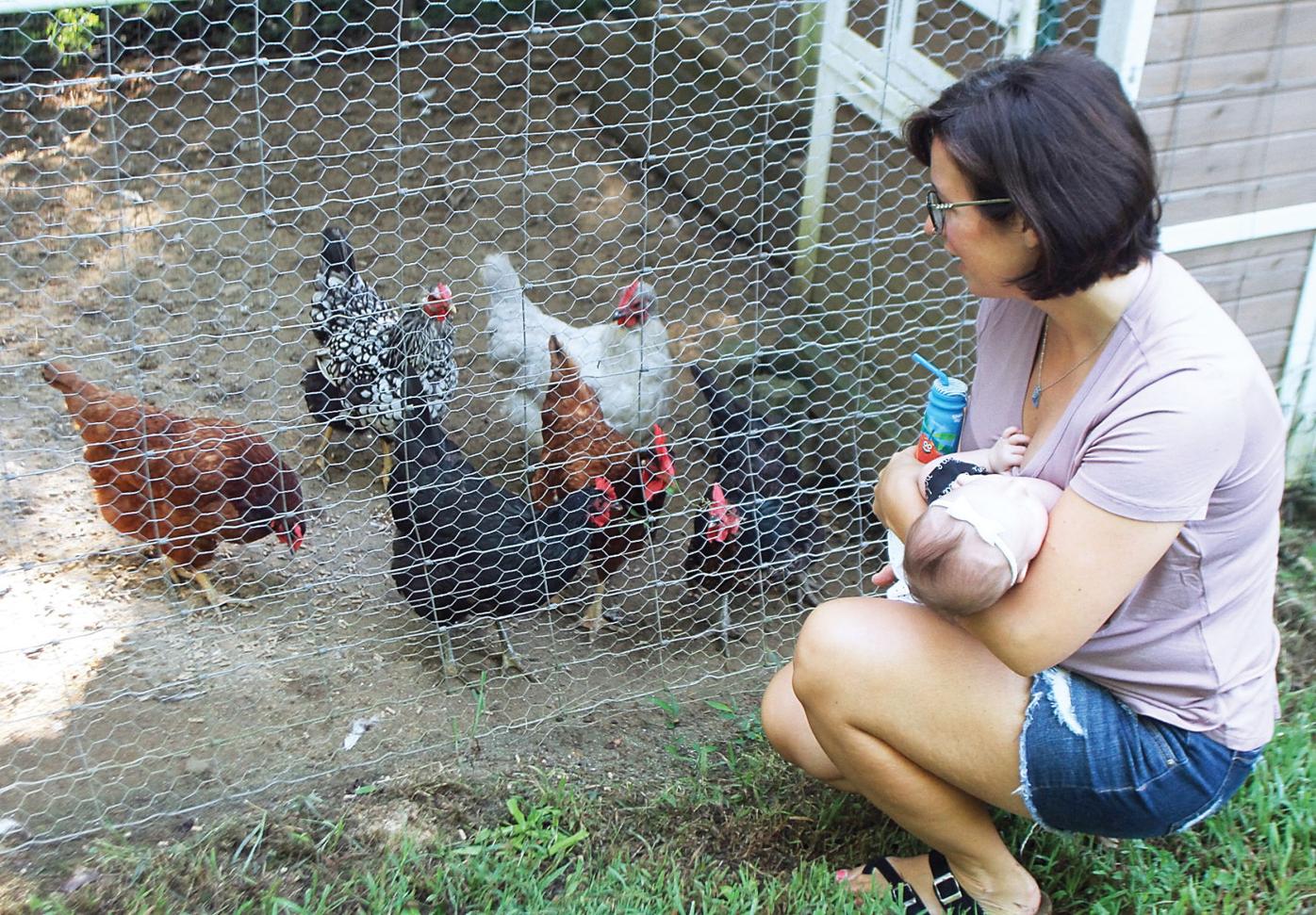 Jessi Sledge checks on her chickens at the family farm, with daughter Adalee in tow. 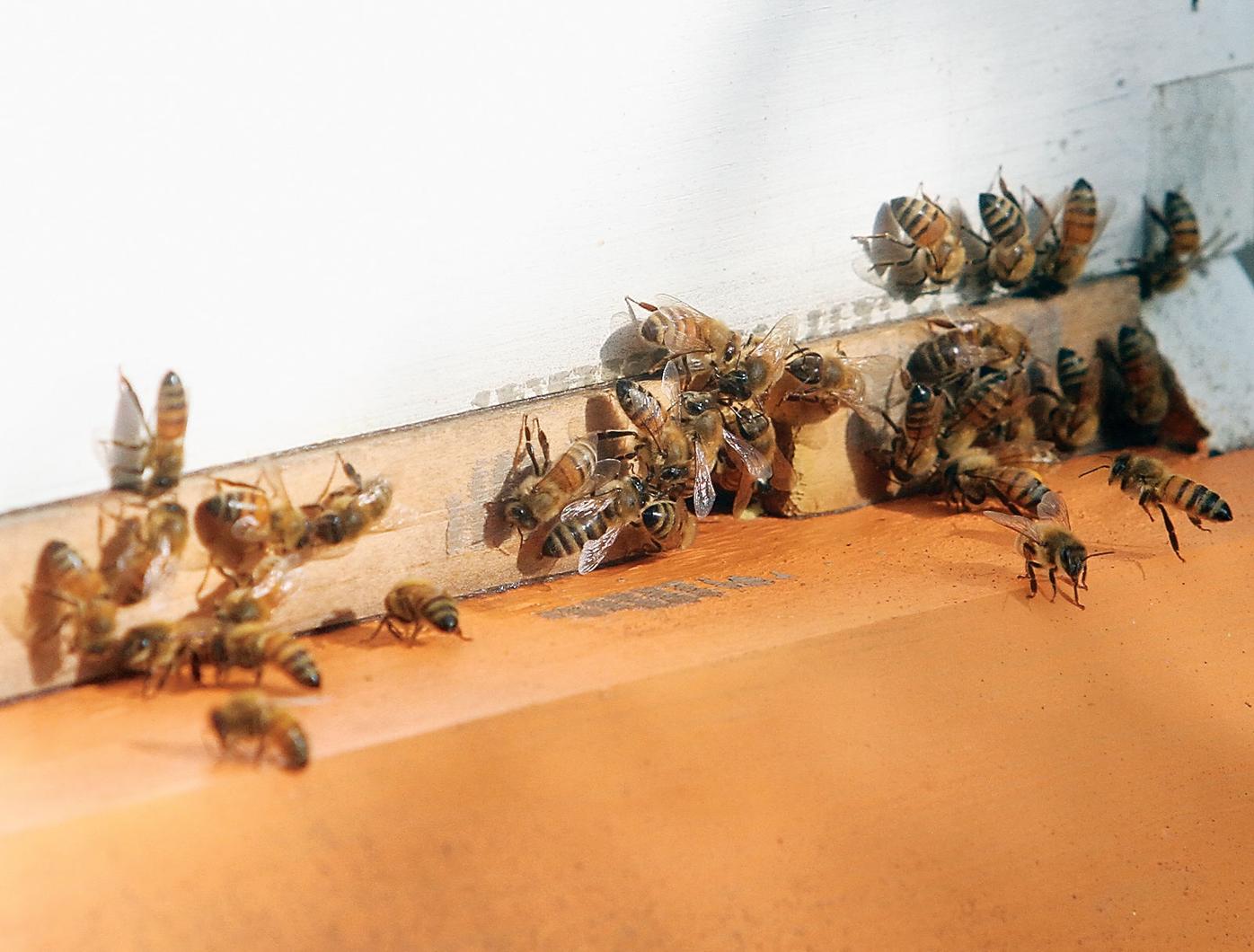 Dusken and Jessi Sledge raise honeybees at Wake Robin Homestead. They sell to the public and also to local restaurants. 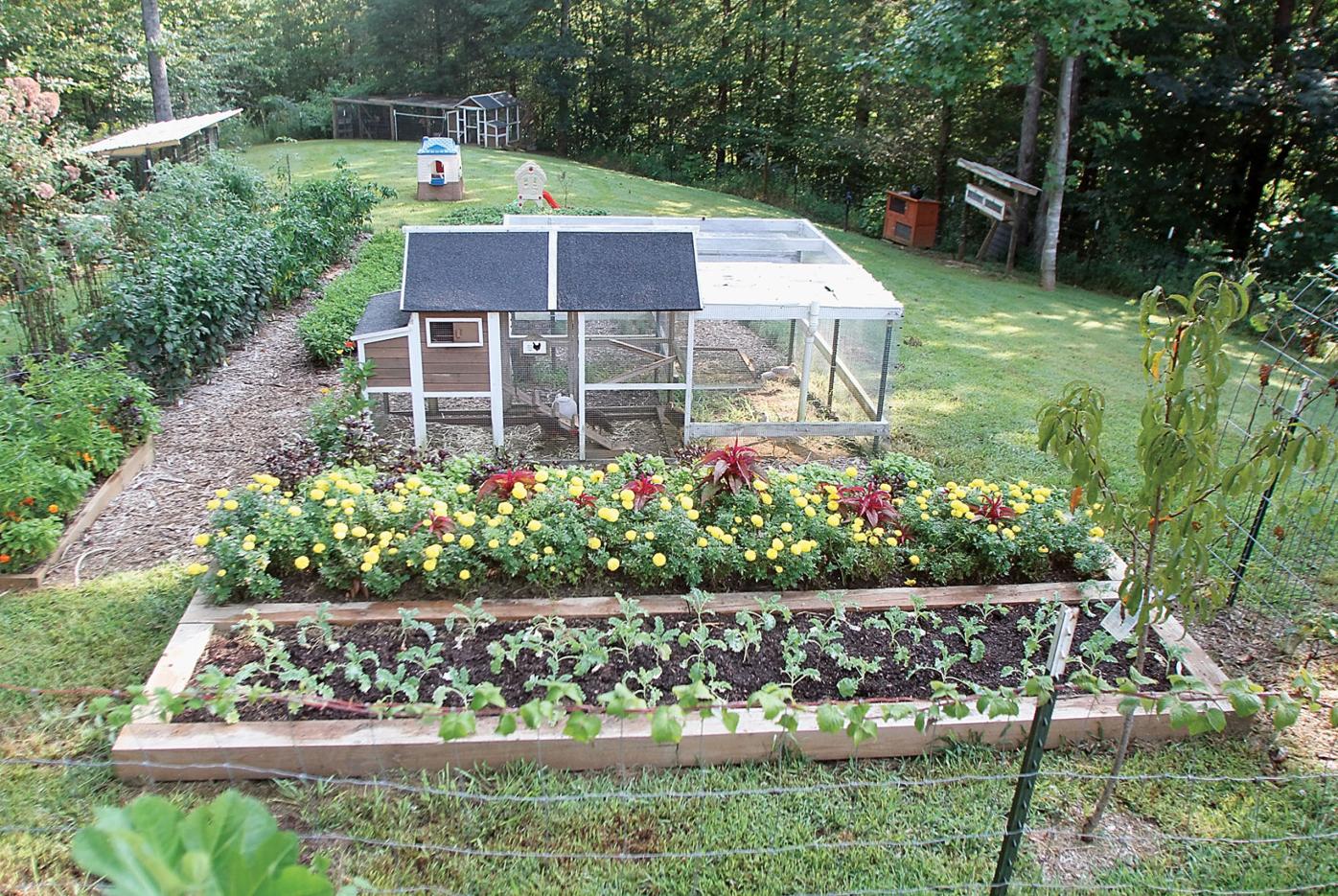 An overview of some of the crops that are grown by Dusken and Jessi Sledge at their Blount County farm. The two left city life two years ago. 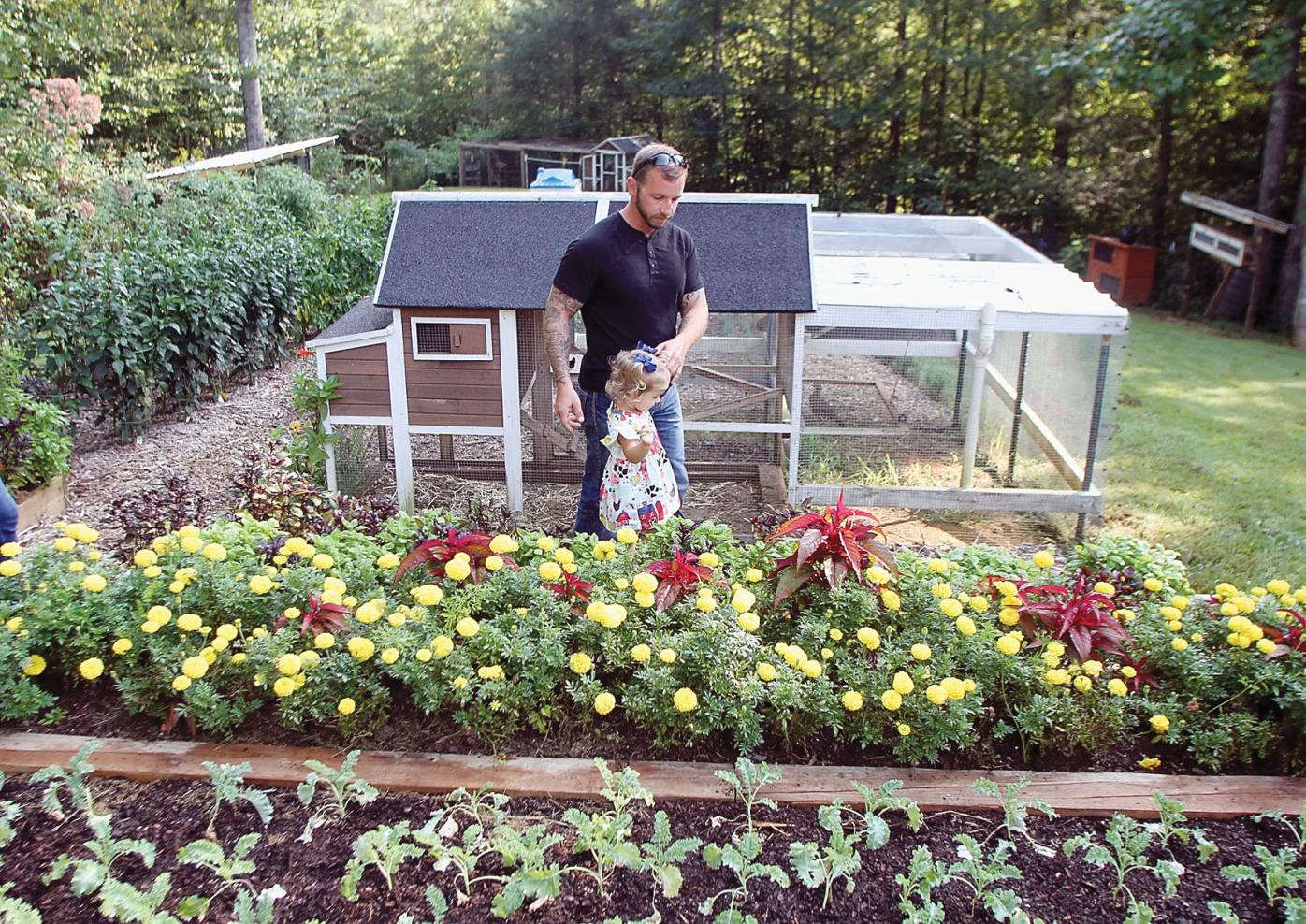 Dusken Sledge walks with his daughter, Everly, along a garden bed at the family farm. He wants his children to experience the outdoors and learn what it takes to be successful homesteaders. 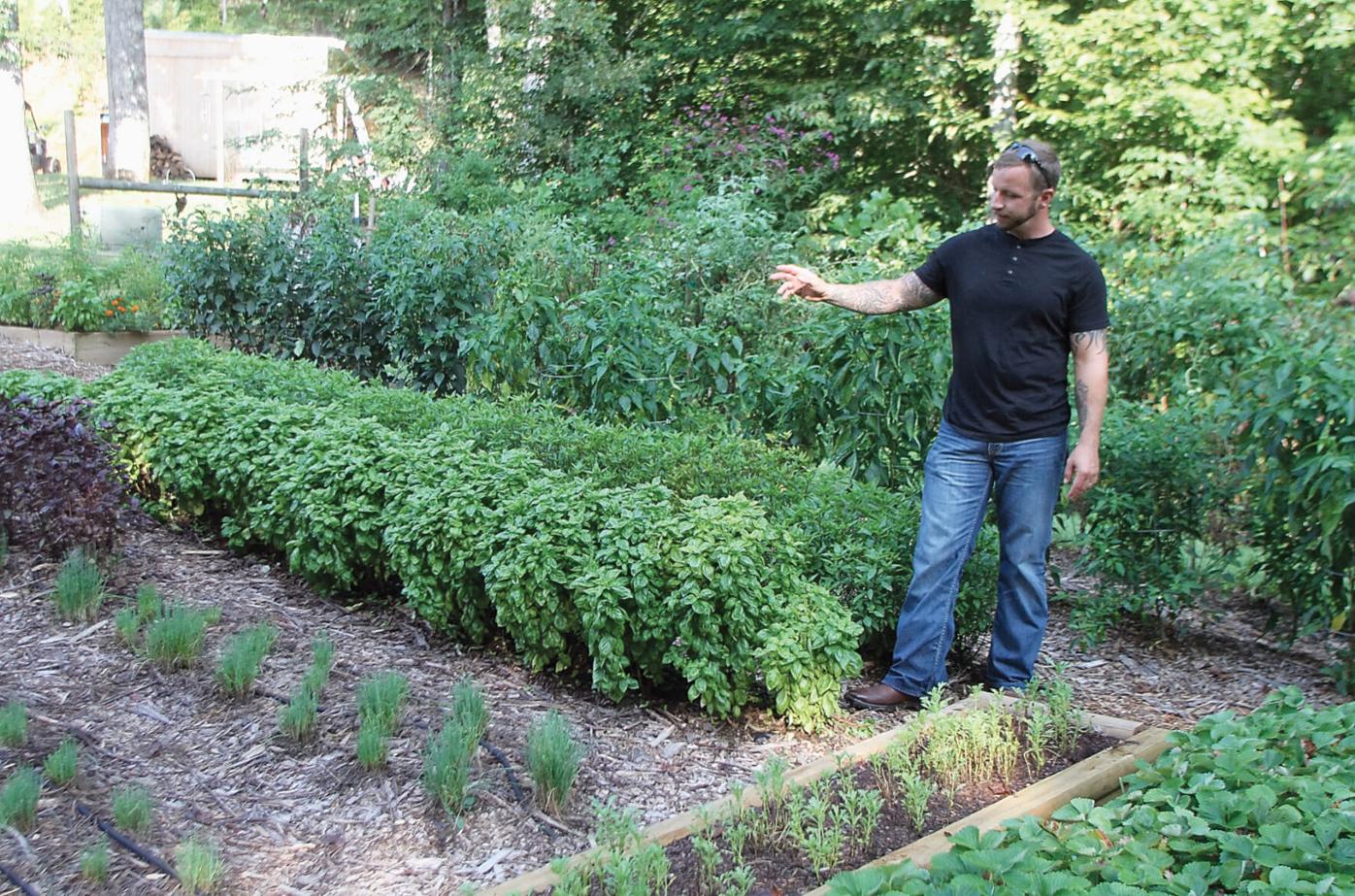 Dusken Sledge gives a look around his farm, Wake Robin Homestead. He grows a lot of herbs for local restaurants.

Dusken Sledge and wife, Jessi, own Wake Robin Homestead in Seymour. They raise fruits, vegetables, herbs and also chickens, quails and pheasants. The couple sells their crops to local restaurants.

Jessi Sledge checks on her chickens at the family farm, with daughter Adalee in tow.

Dusken and Jessi Sledge raise honeybees at Wake Robin Homestead. They sell to the public and also to local restaurants.

An overview of some of the crops that are grown by Dusken and Jessi Sledge at their Blount County farm. The two left city life two years ago.

Dusken Sledge walks with his daughter, Everly, along a garden bed at the family farm. He wants his children to experience the outdoors and learn what it takes to be successful homesteaders.

Dusken Sledge gives a look around his farm, Wake Robin Homestead. He grows a lot of herbs for local restaurants.

Away from the noise, cramped cul-de-sacs and traffic that is city living, Dusken Sledge and his wife Jessi have chosen a much different path.

This young couple sold their home on the edge of Maryville’s city limits back in 2018, and with their then 6-month-old daughter Everly, found breathing room and so much more in a remote Seymour location, nestled against the Chilhowee Mountain range.

Dusken is an Army veteran, having served deployments to Iraq and Afghanistan. He pays the bills with a job working underground utilities; Jessi has stepped away from the grind of a 40-hour office job to raise their two daughters. Everly is now 2½, and baby Adalee is 6 weeks old.

The young couple are now the proud owners of Wake Robin Homestead, named for a variety of trillium that grows in abundance on their 6 acres. It is their dream to become self-sustaining by growing and selling a wide variety of fruits, vegetables and herbs, along with raising livestock including chickens, pheasants, quail and eventually goats.

An early partnership with a restaurant has forged the way to independence. This family sells the fruits of their labor in abundance to three restaurants now.

According to the national Census of Agriculture, Tennessee has more than 14,000 farmers with military service.

The start of it all

“A chef from a restaurant overheard me one day talking about eating natural and living off the land,” Dusken recalled. “He said ‘I might want you to do some stuff for me.’ I really didn’t pay that much attention until a couple of months later when he contacted me and and I said sure. They gave me a list and we started growing and that was that.”

Jessi educated herself on everything from medicinal and culinary herbs to how to protect her chickens from raccoons and other predators. It all began for her, she said, after Everly’s birth and her desire for more natural products. Her first was a bug repellent made from lemongrass and citronella.

“We have learned the hard way when dealing with predators,” she said. “We had two chicks and then we didn’t. Between raccoons and possums, coyotes and bobcats and bears. Now we know what wire to use and what kind of roofing to put on and how to build the coops to make them as secure as possible.”

As these two gave a look around, they pointed out the first crop they started growing for a restaurant — it was chrysanthemum, used mainly for a garnish. It tastes like a minty kale, Dusken said.

Some of their crops are being raised as no-till. Dusken accomplished that with lots of mushroom compost and straw. He plans to expand on it next year. He’s been looking around this month and already envisions what 2025 could bring.

“From a business perspective, we really just don’t say no,” this homesteader said. If a restaurant or new client wants them to grow a particular crop, they will give it a try. Jessi and Dusken said they like staggered harvesting of various crops so they can create a continuous income.

The one word that describes how they tackle this huge endeavor is perseverance, Jessi said.

“It hasn’t been done by the seat of our pants,” she said.

What’s not to love?

The Sledges settled on Blount County because Dusken has spent years hiking the mountains and experiencing the thrill of The Dragon on his motorcycle. He is originally from Athens. Jessi was born in Texas and has lived in numerous places, but her parents are from Tennessee.

“I have always been a fan of here,” Dusken said.

Their piece of heaven, though, needed lots of work, they will tell you. Dusken had to bring in 500 tons of dirt to shore up the mountainside property around the home. Getting the steep driveway into shape is a project for another day.

Things were off to a great start this year, Jessi said. The gardens had been planted with requests from the restaurants.

“Then the pandemic hit,” she said. “You can’t really sell to restaurants that aren’t open. Then around May, they started opening back up at 50% and now things are mostly back to normal. We have really been able to make up some ground when we first thought we weren’t going to be able to.”

Dusken agreed, saying 2020 has been good to them. He said they may cover their mortgage payments this year with the sales of their garden bounties.

The chickens are raised for eggs, as well as the pheasants and quails. These are sold to restaurants, too. Dusken hunts on a 100-acre plot of land he leases. Jessi said they haven’t had to buy red meat since settling on Wake Robin. The two have also raised meat chickens.

Up the slope from their home are several bee hives. Despite being new at it, the Sledges have been successful in this endeavor as well. So much so they sell 2-gallon buckets of the sweet stuff to their client restaurants.

Pedal to the metal

Looking back on their decision in 2018 to pack up and move to start their own homestead, Dusken and Jessi said they know they made the right call. They sold many of their possessions and paid down their debt to increase their chances of success.

The husband and wife sometimes have to laugh at themselves as they jumped off the ledge of city life into becoming tillers of the land.

“Jessi was scared to death of chickens when I met her,” Dusken said. “Now she is out there catching them and she has named them. Some days she’s scolding them when they are doing something wrong.”

Everly has a favorite chicken she has named Dolly, who lays green eggs. She picks berries on the property and roams the property with mom, dad and their dog in tow.

“We wanted a place for our kids to run and play and grow up,” Dusken said. “To be outdoors.”

When they began this journey, the Sledges were a team of two. They have now met other homesteaders who eagerly share their secrets to success. Dusken and Jessi said they have worked hard to achieve this level of independence. He hopes to be able to walk away from the underground utilities job at some point and do this as their sole business.

They have the confidence and work ethic to make that a reality.

To learn more about Wake Robin Homestead, visit the website at wakerobinhomestead.com. Owners are Dusken and Jessi Sledge.