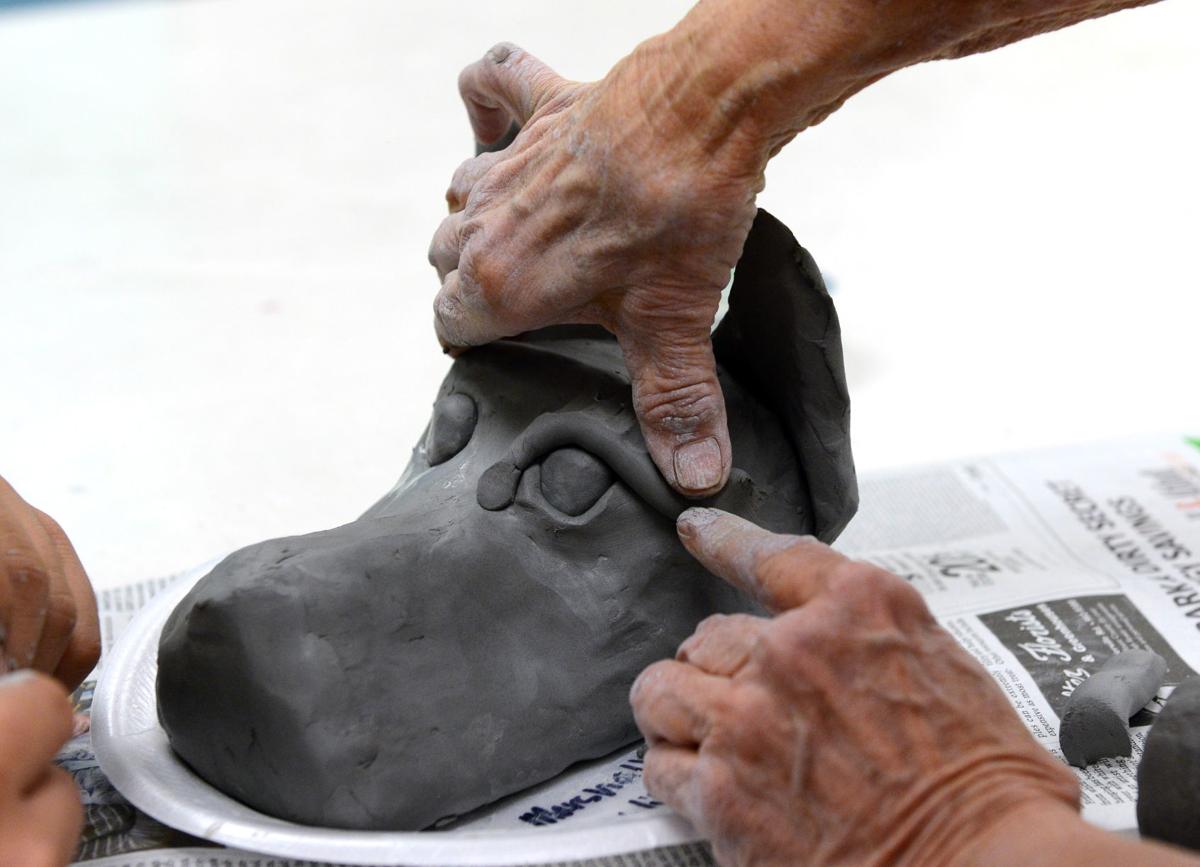 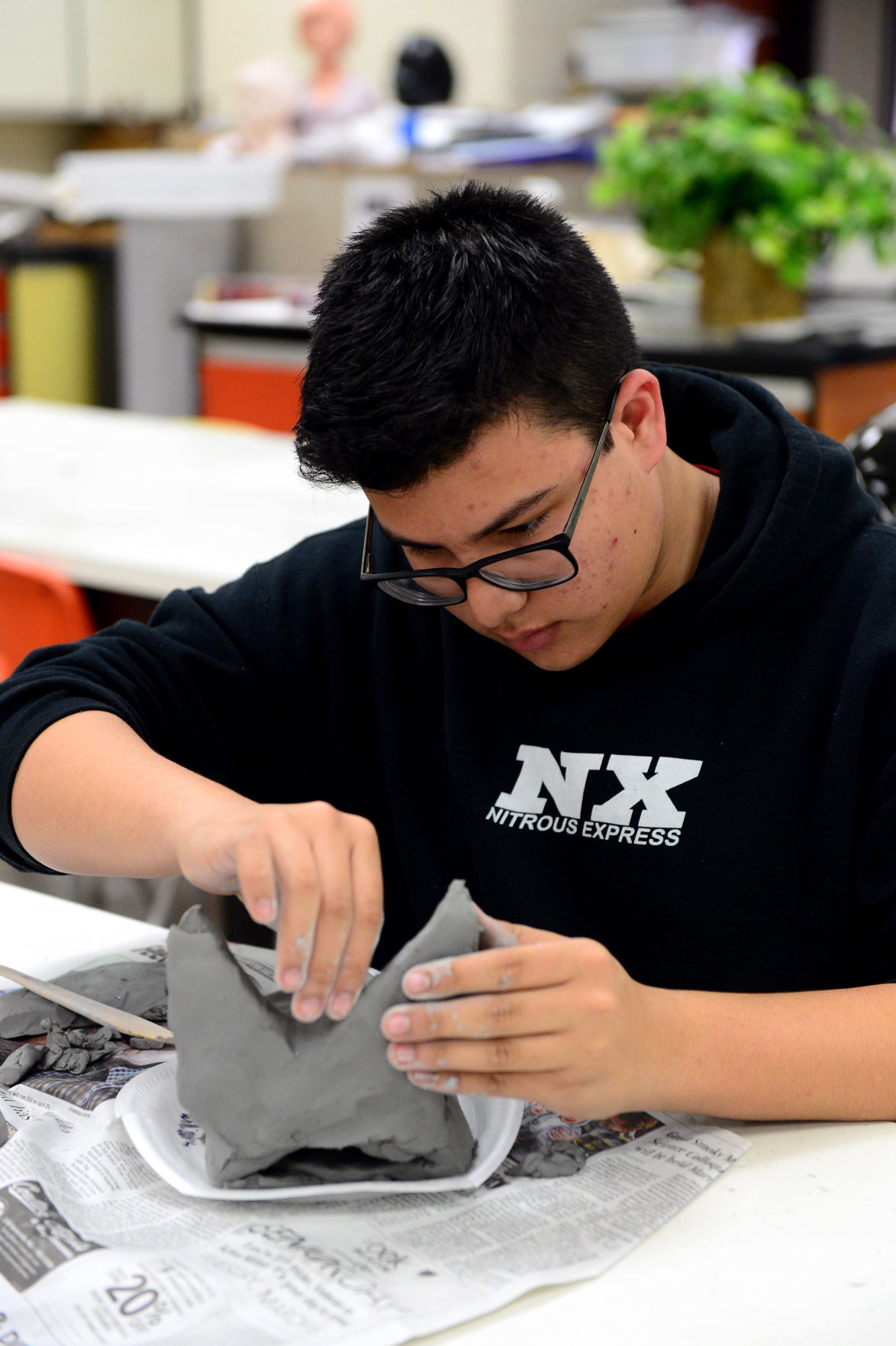 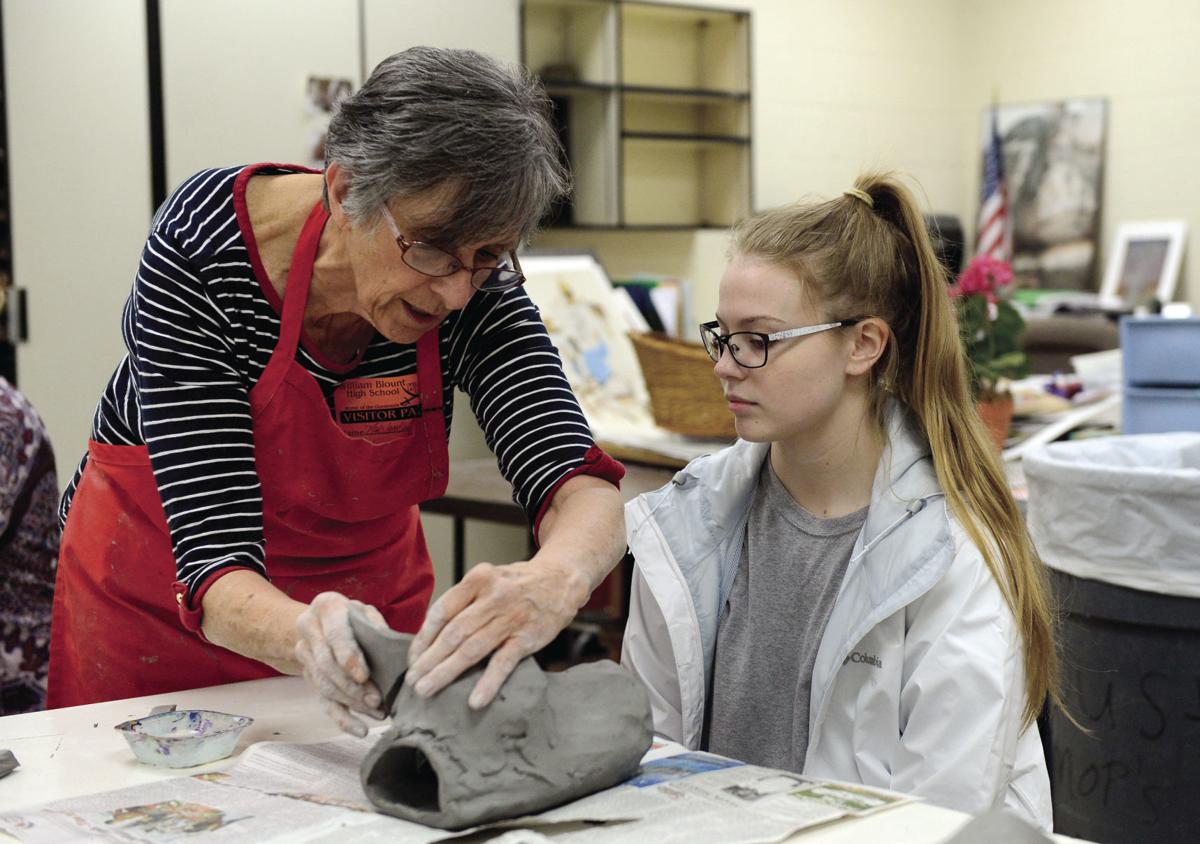 William Blount High School art teacher Doris Poppelreiter had an interesting discussion Monday with her students about the intelligence of dogs as guest sculptor Nan Jacobsohn stood by.

It was fascinating, but it seemed off-subject if creating a piece of art was the objective.

But Jacobsohn, as it turns out, was helping the sophomores and juniors sculpt their own family pets from clay, mostly dogs and one cat. There was at least one member of the class who opted for an alligator.

While they learned how to shape and place dog ears and the proper technique for hollowing out their clay figures, Poppelreiter told them a story about dogs that can detect cancer and even one that was taught CPR.

She believes teaching only art in art class is cheating students out of the education they deserve.

“I am a big believer in incorporating art into everything,” she said. “Subjects shouldn’t be broken up, but instead should be brought and taught together. It makes more sense.”

The educator has had lots of time in the classroom to test her theory. She is completing her 40th year, 19 of those years teaching art at WBHS and Mary Blount Elementary. Before that, she was a classroom teacher at Alnwick and Binfield, two schools no longer in existence, and a stint at Lanier Elementary.

Jacobsohn visited WBHS last week thanks to a grant from the Tennessee Arts Commission. She will finish up the week as students put the finishing touches on their creations and fire them in the kiln.

Jacobsohn is a professional sculptor who resides in Nashville and has a studio, Midsouth Ceramics. Before that, she was a public school teacher for 10 years and also has worked for museums.

Art has been her life, she said.

Talent from an early age

“My mom said I brought home some pretty cool stuff from kindergarten,” Jacobsohn said. From there, her passion for art grew and grew.

When her children were grown, she took a leap of faith, quitting her full-time job and stepping out on her own as an artist.

“My children were off to college, so I felt like I could afford to freeze to death in the dark,” she said with a big smile. The starving artist life, however, didn’t materialize. Instead, Jacobsohn is in her 22nd year as professional ceramics artist.

Most art teachers are great artists, Jacobsohn said, but they have to be generalists, meaning they have to teach a little about a lot. When she comes into a class, Jacobsohn can take students much further into her medium.

There also is a different approach and viewpoint coming from professional artists, she said.

It is important, Poppelreiter said, to introduce examples like Jacobsohn to students so they can see it is possible to create a comfortable life doing what you love. Even if they aren’t going to be painters or sculptors, this instruction can go a long way in other careers, too.

“Think about an orthopedic surgeon,” the art teacher said. “He will be sculpting your bones. Clay is a medium that involves everything. There is chemistry with the changing of properties from wet to dry. There are math skills because you are doing something with different dimensions. I love clay. It is one of my favorite mediums.”

Anna Crabtree, a senior. was in class Monday morning. She said she has been in enough advanced placement classes over her high school career and just wanted something more enjoyable and fun. She found it with this project. Her task was sculpting her dog Libby. It has been her favorite project, she said.

Where art can take you

Sophomore Marshall Williams was busy on his creation.

He admitted he started out trying to sculpt his dog Sam, a Huskey, but then it became another dog entirely. He worked in clay in middle school but not this in-depth.

The experience, he said, will surely help the high-schooler in his selected profession of one day designing cars. “I thought if I took art it would help,” he said. “I like anything related to cars.”

Kelsey Walter was working a lone cat sculpture, using her cat Pixie as the model, or at least a photo of her.

When Jacobsohn visits high school classrooms like this one, she gets asked the same question over and over. “Are you rich?”

To which she replies, “Yes, absolutely.”

Maybe not in terms of dollars, she points out. She said experiences and friends are her gauge of success.

But success doesn’t come minus hard work and determination. Jacobsohn said there is research that suggests it takes 10,000 hours of practice before anyone can get accomplished in their field. Having one or two really great teachers helps, as well.

The successful artist said for her, it was a junior high school teacher. Jacobsohn grew up in upstate New York in the projects. She said while in college, she ran out of money. Her junior high teacher paid for her tuition.

That’s why she works so hard today — to pay back the good that was given to her. “We owe so much to the people who came before us,” she said.

Money for the arts has certainly waned in recent years. Poppelreiter has been grateful for grants from the Tennessee Arts Commission and others over the years. One grant from the Blount Education Foundation bought the kiln in her classroom. She said she’s received grants of $8,000. After she is gone, she hopes her replacement will seek them out as she did.

As Poppelreiter looks at only a few more weeks as an art teacher at William Blount, she is excited to move on, but also a little apprehensive about what that means. Retirement is the chance to do what you want when you want. The art teacher said she is going to start back with her own art. She had her own studio before teaching at the high school.

“It doesn’t feel like 40 years,” Poppelreiter said. “I enjoy working with students and I love what I do. The thought of getting up in the morning and not going to school is scary.”

But, there will be all that freedom, she said.