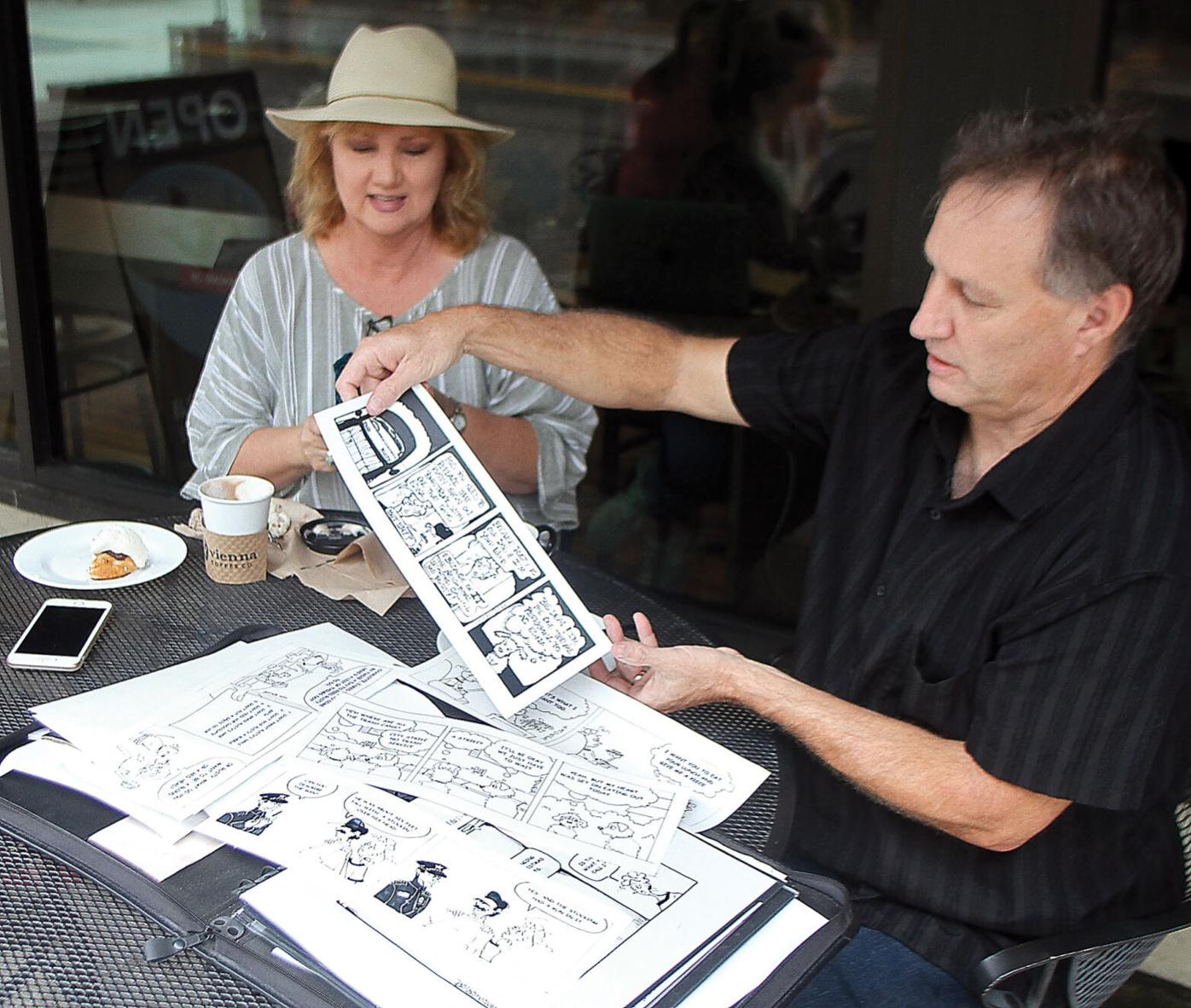 David and Doreen Dotson talk about the comic series they draw. The couple moved here from Temecula, California, a little more than a month ago. Their comic strip is called “Outzkirts.” It is published by smalltown newspapers, mostly in Texas. 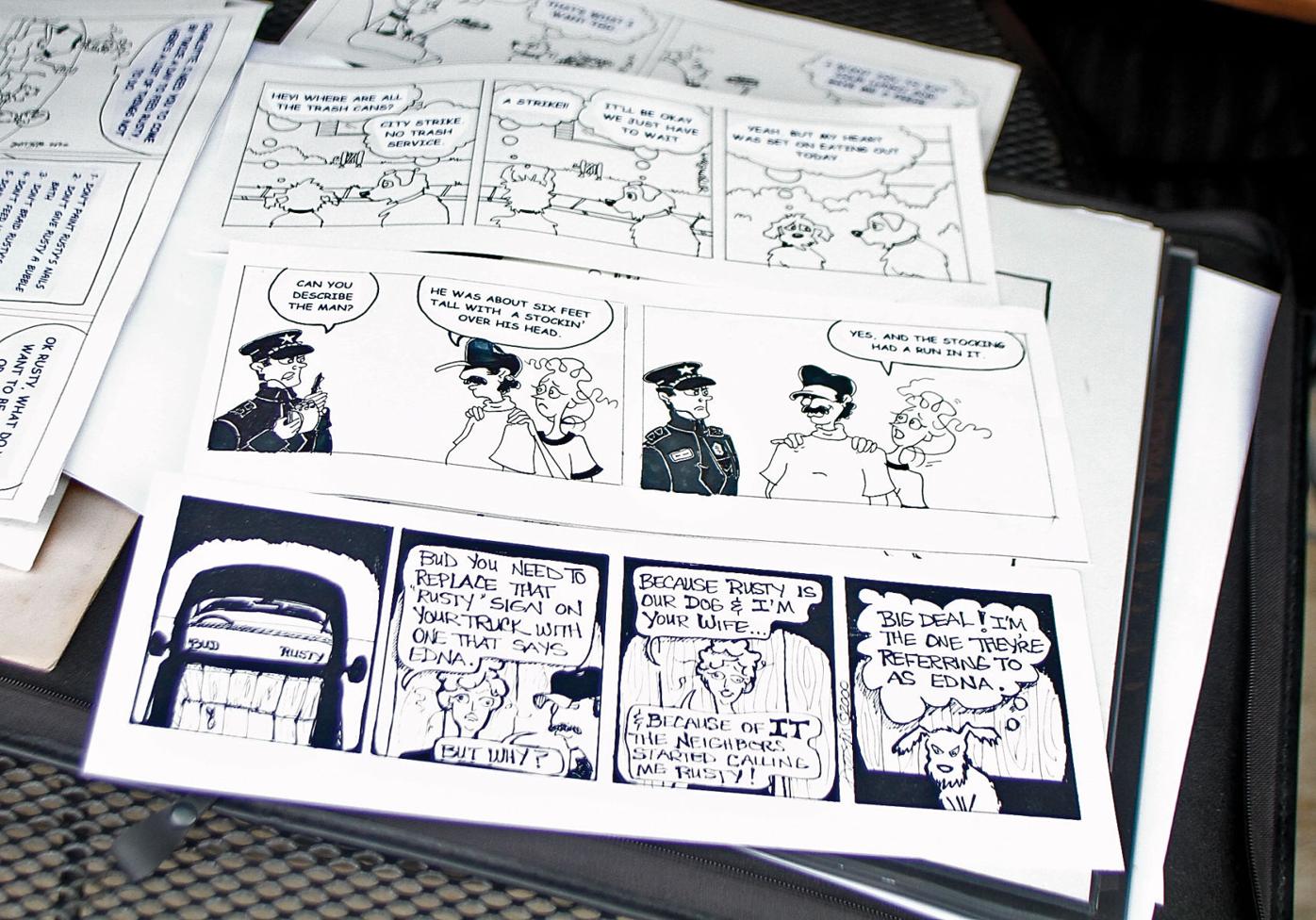 Some examples of the comics that husband and wife David and Doreen Dotson draw for publication in small-town newspapers. The couple moved to Maryville recently and are committed to gaining more visibility. 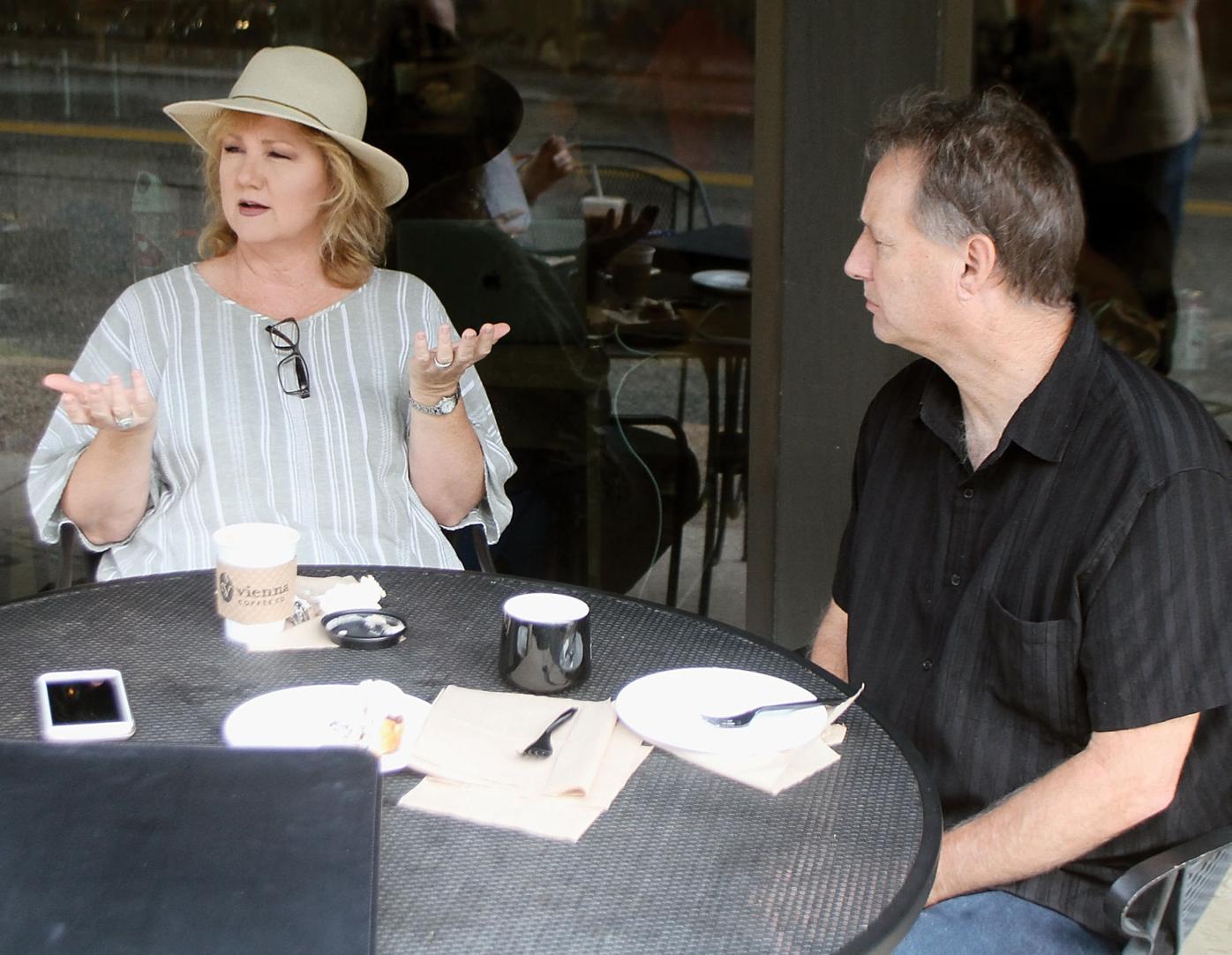 David and Doreen Dotson talk about how they began drawing comic strips. Their first one was sports themed and called "Sport Barbs."  Today, they create "Outzkirts."

David and Doreen Dotson talk about the comic series they draw. The couple moved here from Temecula, California, a little more than a month ago. Their comic strip is called “Outzkirts.” It is published by smalltown newspapers, mostly in Texas.

Some examples of the comics that husband and wife David and Doreen Dotson draw for publication in small-town newspapers. The couple moved to Maryville recently and are committed to gaining more visibility.

David and Doreen Dotson talk about how they began drawing comic strips. Their first one was sports themed and called "Sport Barbs."  Today, they create "Outzkirts."

It's not like Doreen and David Dotson needed a knock over the head for them to realize what they now see as God's plan for their lives. Or did they?

It would take decades before they would leave their California home, move to Maryville sight unseen, and give fresh eyes to the passion they had at creating their own comic strip. The signs, they said, were everywhere. Sometimes, though, you just ignore them or doubt the nudges were really for you, they said.

The couple met in 1987 in church and married in 1990. In Southern California, they soon were busy doing life and later getting frustrated at where things seemed headed. Dave owned his own mobile auto detailing business, which meant he often traveled great distances for clients. And every spring, he dreaded the upcoming desert heat and working in it day after day.

For Doreen, her look into the future was cloudy, too. She loved to draw from the time she was a small child and took graphic arts classes in college. But after she met David in 1987 and married in 1990, she concentrated on raising their family, which includes two daughters and a son.

In the early '90s, however, David got an idea that he would write a comic strip with sports as its focus, and he got Doreen to illustrate it. He named it "Sport Barbs." It was based on his love for the Los Angeles Rams and his dislike of the owner of the team at the time.

The two main characters were Ross and Gail — the couple's middle names. Doreen's sister made an appearance in the comic strip as well.

"It was raw, really, really raw," David explained. "We didn't have a clue as to what we were doing."

The Dotsons even sent off their work in hopes of getting syndicated. While that didn't happen, they did receive some good advice from two syndicators who wrote back. "That was really cool," David said.

They were able to get that first comic strip into a few papers, mainly in Texas. But as parents of three children, they shelved the idea of taking it any further.

"Days turned into months and months into years," David said.

As Doreen explained it, she needed a sign to move forward, either with the comic strip or something else.

"The disciples had Jesus right there to ask for direction," Doreen said. "I was struggling. I needed confirmation. I prayed that God would just hear me and tell me to do it and I would."

The "it" was the comic strip.

Meanwhile, on that same day, David was having breakfast with a friend and lamenting life's toils. David told his friend he wanted to get back to the comic strip but needed someone to convince Doreen.

The friend then told him, "'You tell Doreen that Hayden said to do the comic strip.' It was bizarre. It was almost like it wasn't him."

So, David went home and gave Doreen that message, that sign she needed.

"I got a chill," Doreen recalled. "I had been praying about the comic strip. And like the obedient Christians we are, we didn't do anything."

That happened in 1996. The Dotsons kept going without any progress on a comic strip.

The next sign would come when the couple attended Shadow Mountain Church in California and heard Pastor David Jeremiah's message that Sunday on Jonah and his refusal to obey God.

"Doreen said, 'I am Jonah,'" David remembers. "She said she felt like God was telling her to do the comic and she wasn't listening."

What Doreen remembers from the message was the pastor telling them that whenever God sends you one way, Satan will send a shiny boat to take you in another direction.

"I wanted to (sell) Mary Kay and that's the shiny ship," Doreen said she realized at the time. So she boarded that shiny ship.

It wasn't until the couple got correspondence from the wife of Johnny Hart, the creator of the comic strip "B.C.," that Doreen started to surrender to what she felt was God's will. She looked at the card that was sent and then the address on the envelope. It was sent from Nineveh, New York. Nineveh is the place God was sending Jonah.

"So we started moving ahead with the comic," David said.

As they tried marketing "Sport Barbs," Doreen and David discovered a comic strip based on sports wasn't sellable. They needed a new idea. One day as Dave was driving cross country for his business, he scratched it all out in his head.

The main characters would be Bud and his wife, Edna, and their dog, Rusty. Then it came time to find a name.

Outskirts of town was what he came up with, spelled Outzkirts for the actual comic strip. He chronicles the adventures of Bud, Edna and Rusty, and Doreen brings them to life on the page.

The two credit people like Johnny Hart, Greg Evans and Paul Gringle with nurturing their talent and encouraging them. Evans and newspaper comics artist Gringle were part of the Southern California Cartoonist Society. Lee Holley, the creator of the syndicated cartoon "Ponytail,"  was a special mentor.

"We are starting to market again after many years," David explained. "So hopefully, we will start picking up new papers again. We hope to get into papers here in Tennessee."

Tennessee because it's where they now live, specifically here in Blount County. The journey that led them here from California is a faith journey, too, the couple said. David was tired of high taxes and wanted a new place to start over; he initially chose Tennessee because his grandmother was from Chattanooga. Doreen was eyeing Texas.

But after another set of signs that included them both discovering Maryville individually and having a friend from North Carolina who came here to scout out the area, they made the leap, selling their home and moving here sight unseen. When they were on the road in Amarillo, Texas, and happened upon a pastor from Arkansas, they started sharing their story of the move.

Turns out, that man, a complete stranger, has a friend in Maryville. David and Doreen sought him out after arriving here.

In addition to "Outzkirts," the Dotsons also briefly did another comic strip they called "Jonah's Journey," a way to share their Christian faith in a lighthearted way. They place a whale in each "Outzkirts" comic to remind themselves of God's presence in their lives.

They even have written a book called "Get Psalm Kicks in the Sticks." Each of their comics is paired with a relevant passage from Psalms.

"We are part of God showing us that he is long-suffering and patient," Doreen said. "He shows himself to be real even when we are unfaithful."

Ask them and they will both say that why they were led to Maryville is still a mystery to them. Doreen is now working as a full-time freelance artist and cartoonist, while David is retired from auto detailing and looking for a full-time job to go along with cartooning.

"In his time, God will reveal more of the plan for us and we can't wait to find out," David said.

Dave and Doreen Dotson hide a whale in each of their comics. The first person to locate one in the accompanying comics and who contacts them at their website, www.outzkirts.com, will win an autographed copy of their book, "Get Psalm Kicks in the Sticks."