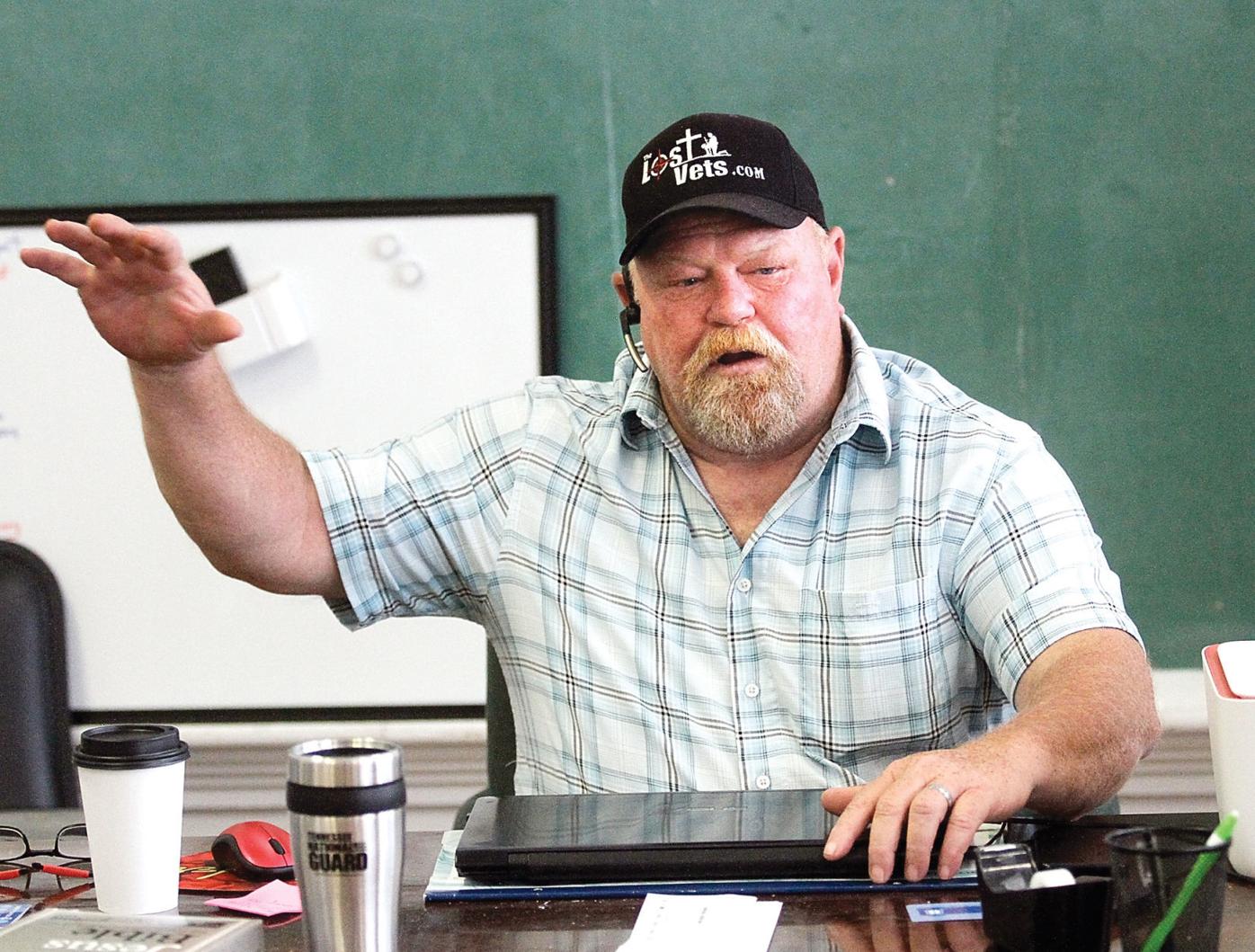 Willie Franklin talks about The Lost Vets Rescue in the Alnwick Community Center. He founded the nonprofit that serves veterans. 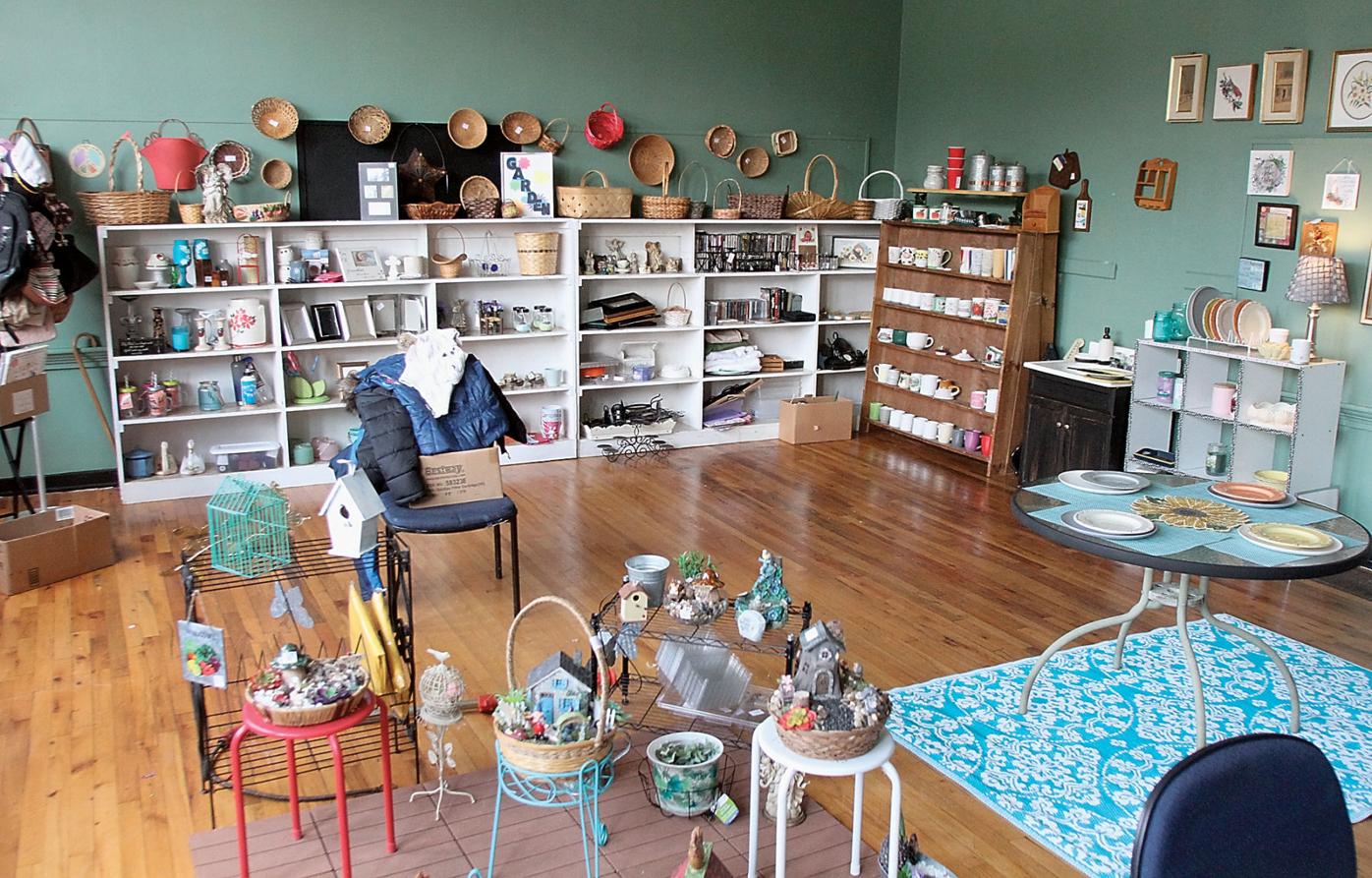 The Alnwick Community Center will have a thrift store, called My Thrifty Venture, with all proceeds going to The Lost Vets Rescue. Sharon Neumann will oversee the store. 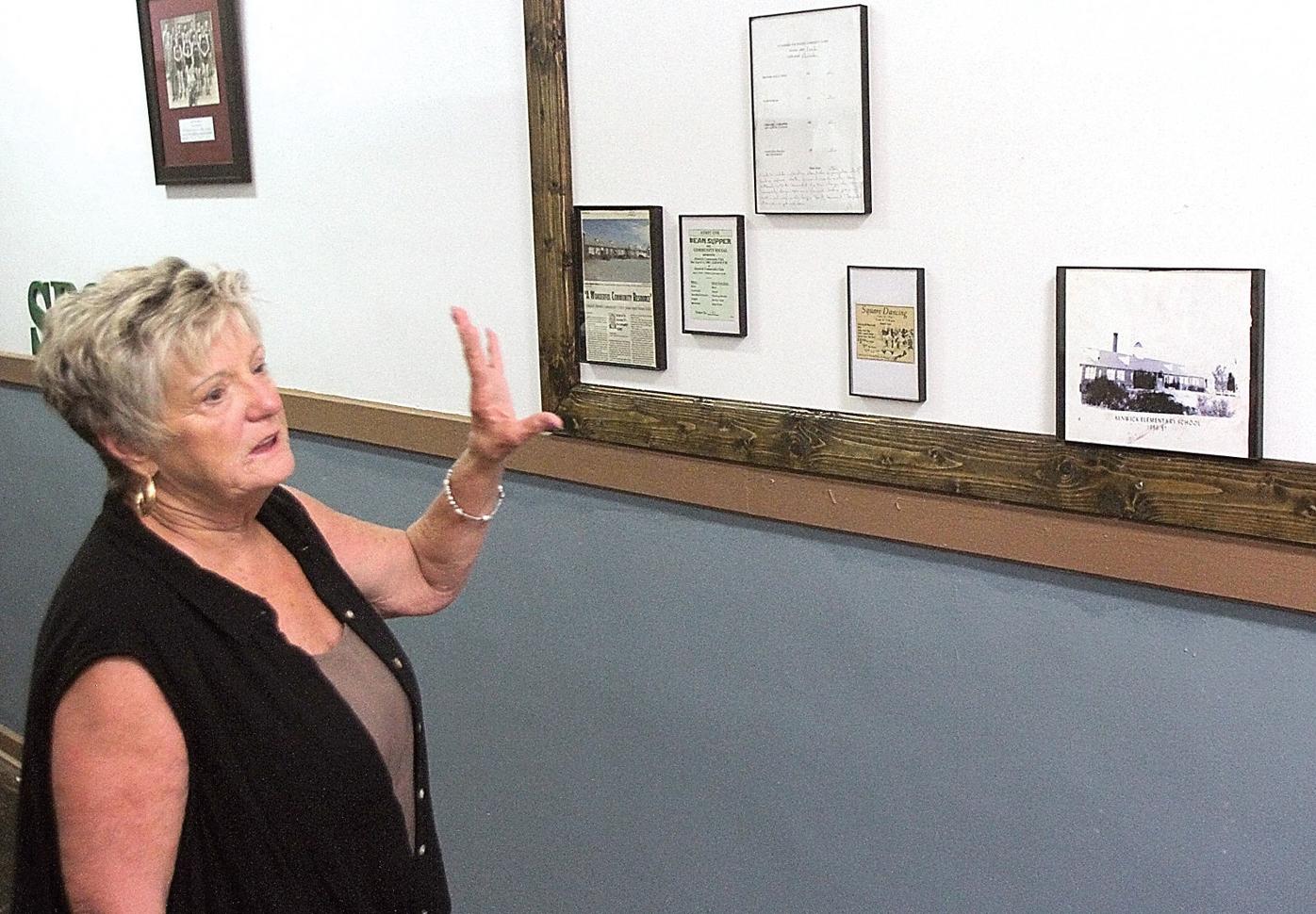 Sharon Neumann talks about her vision for the Alnwick Community Center. On the hallway wall are old photos and other memorabilia. The building was once a school. 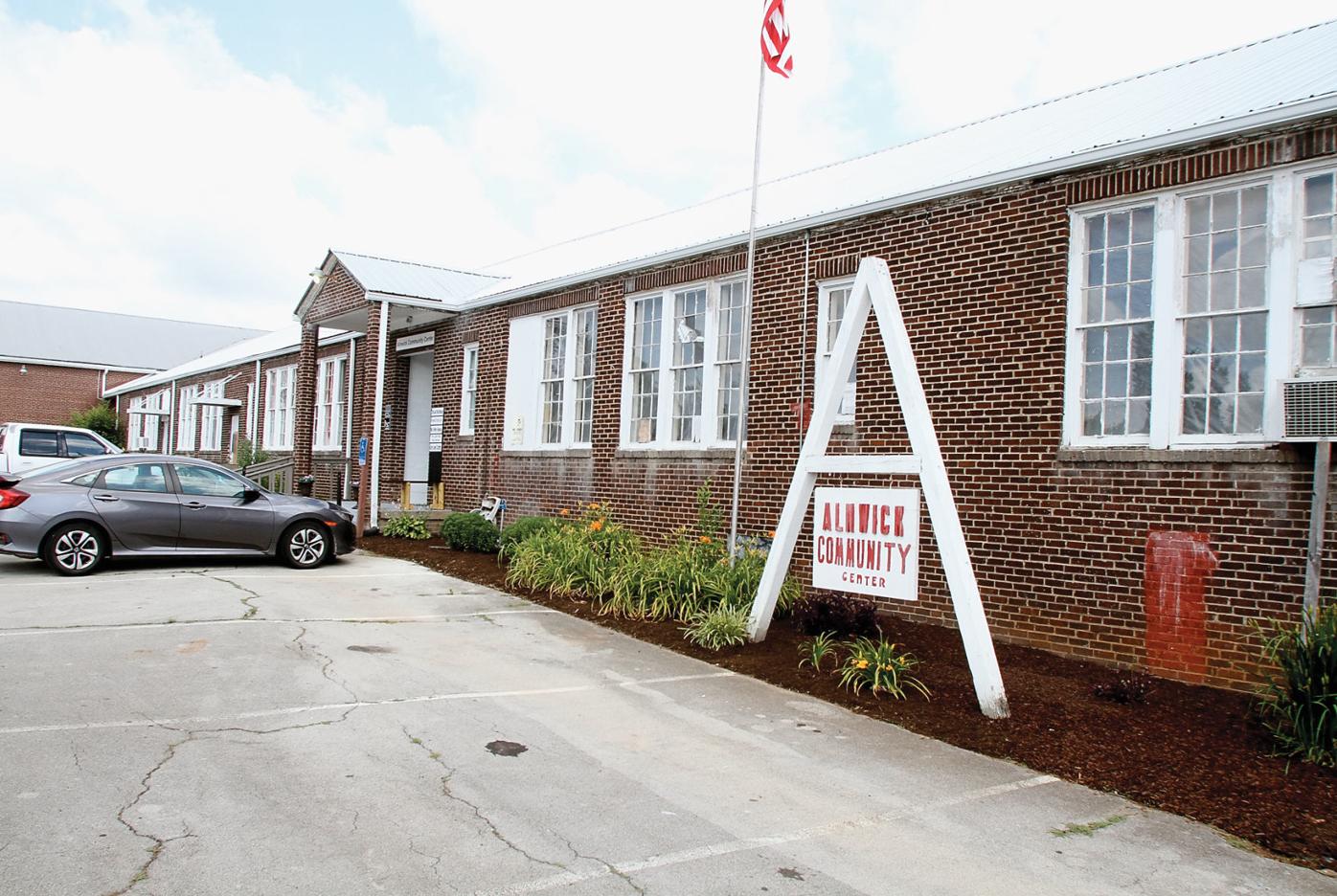 Alnwick Community Center is shown as it stands on Tuesday with a new roof, which was added recently. The parking lot will be repaved and new organizations are moving in.

Willie Franklin talks about The Lost Vets Rescue in the Alnwick Community Center. He founded the nonprofit that serves veterans.

The Alnwick Community Center will have a thrift store, called My Thrifty Venture, with all proceeds going to The Lost Vets Rescue. Sharon Neumann will oversee the store.

Sharon Neumann talks about her vision for the Alnwick Community Center. On the hallway wall are old photos and other memorabilia. The building was once a school.

Alnwick Community Center is shown as it stands on Tuesday with a new roof, which was added recently. The parking lot will be repaved and new organizations are moving in.

As drivers along Big Springs Road make their way into town or a nearby destination, they might catch a glimpse of a building that once served hundreds of this community’s families — or simply pass on by without a glimpse or thought of what it was or could become.

The decades-old structure that was Alnwick School stands today and, over the years, has been home to a food pantry, flea market, church and gathering place for music, basketball and other entertainment. The original building was constructed in 1918 but was replaced after a 1948 fire. It ceased to be a school in the early 1980s as Blount County decided to consolidate small, community schools in favor of much larger ones. Alnwick Community Center was formed in 1985.

To say it’s seen better days is unmistakable, but the 25,000-square-foot schoolhouse definitely has good bones and already has seen great improvements in recent years. An old fence was taken down and new roof added along with other projects. Over the past few weeks, interior paint has covered worn walls. Restrooms have been updated. Landscaping out front is inviting. It is a work in progress.

On Saturday, June 27, the public is invited to enter and view the new Alnwick Community Center and its inhabitants. The grand reopening will take place from 10 a.m. to 3 p.m. and will include live music, antique cars, food court and ribbon-cutting with Blount County Mayor Ed Mitchell, at 11 a.m. The address is 2146 Big Springs Road. The reopening has been made possible through a partnership between Alnwick Community Center and The Lost Vets Rescue, which has its office there.

Many of the rooms are no longer vacant. It’s now home to Alnwick Food Court, My Thrifty Venture, The Lost Vets Flea Market and an arts and crafts store in addition to The Lost Vets Rescue and its founder, Willie Franklin. A store that sells unused furniture will open its doors.

Franklin started The Lost Vets four years ago out of his home after the death of a friend and Air Force veteran. Franklin traveled for many years as a touring musician and the death of that man, fellow musician Kent Bilbrey, left Franklin empty and searching for a calling. That’s when Franklin said he felt led by God to start his organization.

He remembers when Bilbrey got sick and went to a Veterans Administration hospital. Bilbrey was told he could get an appointment in 318 days, Franklin said. That was an eye-opener for Franklin and the catalyst for what he would do for the rest of his life.

Franklin earns his living by playing music and relies on the kindness of others to donate to The Lost Vets. He said he might get a call at 5 a.m. from a veteran who has broken down on the side of the road and doesn’t have money for repairs. His organization has helped a veteran provide Christmas for his children or found him temporary lodging.

“In the last four years, we have helped more than 100 veterans get on their feet and off the streets,” Franklin said. “I have worn out three vehicles since I started this.”

It is his dream to be able to provide a tiny house village where veterans can stay, find jobs and get help with issues related to their service. He knows it will take lots of money; in the meantime, he said he will do whatever he can for those who have made sacrifices in service to the country.

Some young men and women join the military to get out of desperate situations at home, Franklin explained. They are trained “to do bad stuff” and then released to go back to their old lives again.

“They need a place to land and stay until they get right,” he said. “Then they can move on and start life again.”

Other ways to help

Franklin’s had his office at Alnwick for a year. Previously, the office was on Ellis Avenue. His wife, Nancy Hall, assists him with the nonprofit along with Sharon Neumann, who has come alongside Franklin and Alnwick Community Center to breathe new life inside.

Neumann is opening the thrift store, called My Thrifty Venture, on Saturday. All of the proceeds will go to The Lost Vets, she said. The same thing goes for the store, which will sell unused furniture.

Perhaps some have attended a flea market at the former school.

The community center has been revamped by Neumann, with the intent of helping Franklin. The flea market will be open Fridays and Saturdays and anyone who wants to set up their handmade wares and other products may do so free of charge. The only requirement is that each table have a tip jar with donations slated for The Lost Vets.

It is the hope of Franklin, Neumann and the Alnwick board that the community will embrace this new endeavor, come to the grand reopening and partner up. There was a spaghetti luncheon this past week to let business and other leaders know what’s in store here. New partnerships have been formed with the National Guard Armory, AmVets Lodge 22 and Lowe’s. The National Guard Armory will recruit out of Alnwick. Music will continue on weekends. Franklin said he will perform in different festivals, all right here, where he feels at home.

Out in the hallway of the large former school are reminders of its history — photos of sporting events and of families who once attended classes here. Neumann has put together a school timeline, from its beginning in 1918. The facility includes a gymnasium.

Despite having no personal connection to Alnwick, Neumann felt a strong pull to try and make the reopening a success. She said she met Franklin a year ago and believes in his cause.

Because she serves as treasurer/secretary to The Lost Vets, Neumann said every penny goes to help the veterans in need.

Future goals include being able to purchase a van so The Lost Vets can help transport men and women to medical appointments, etc. The organization also helps bury veterans with no surviving family members. Neumann will offer free modeling classes to children and teens. After the eight-week course, they will hold a fashion show, she said. She previously owned a modeling school.

Brenda Gibbs is president of the Alnwick board. She is in charge of the food court and can do catering. A banquet room at Alnwick can be rented out for parties, reunions, showers and even business meetings, Neumann said.

New windows are needed. It will cost $60,000 for the ones in front. Some businesses might want to sponsor a window, Neumann said. Spreading out the costs among friends is the goal, she explained.

While the work continues, there are new signs out front, beckoning visitors inside.

“It was just a shame this building was just sitting here,” she said. “This is all about bringing the community back together. I can’t wait to get it open.”

Alnwick Community Center, 2146 Big Springs Road, Maryville, will hold its grand reopening from 10 a.m. to 3 p.m. on Saturday, June 27. The event will include a public ribbon-cutting with Blount County Mayor Ed Mitchell, at 11 a.m. There will be antique cars, bands, arts and crafts vendors, face painting, food court and more. There is no cost to attend.