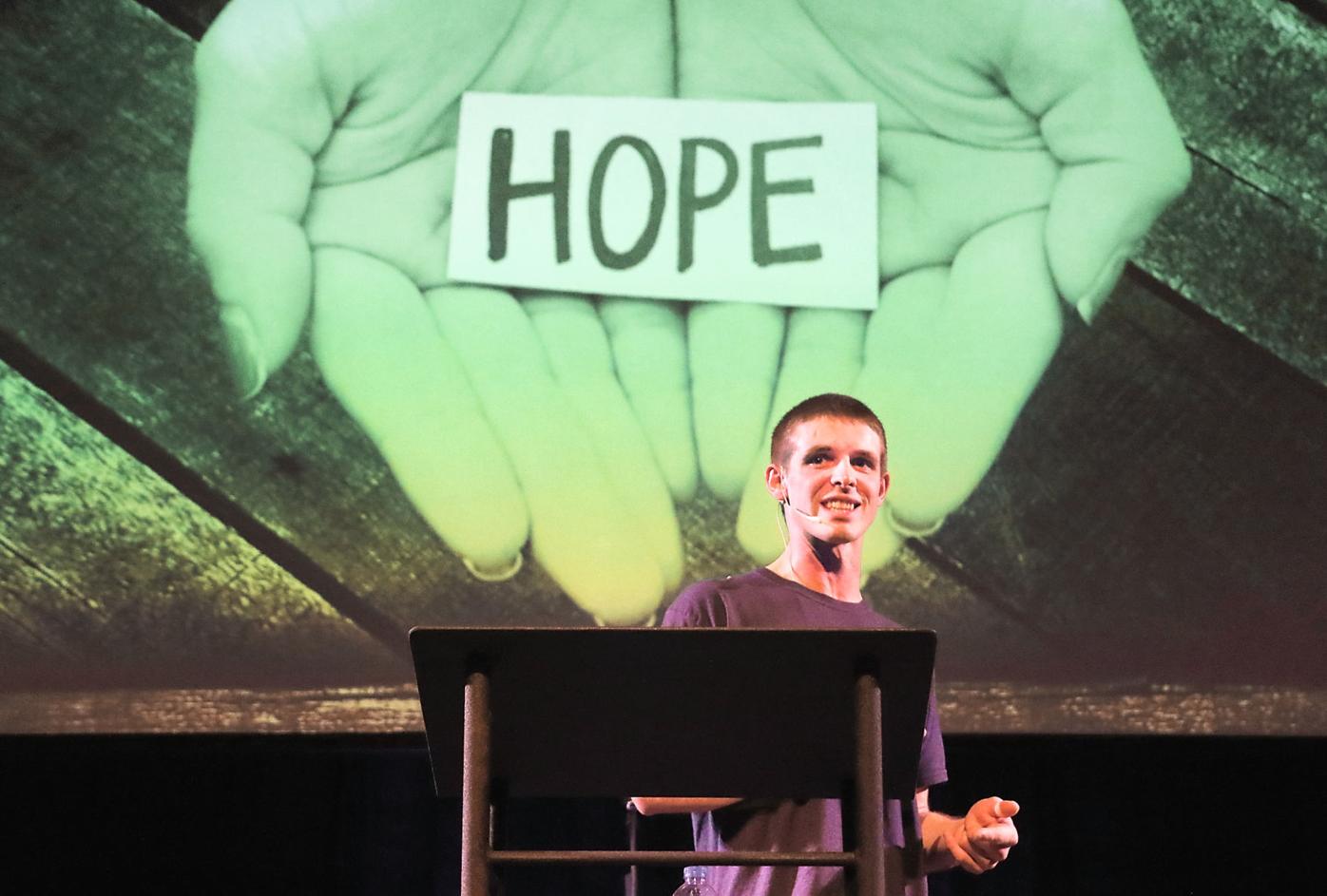 Matt Hall, 26, talks about his experience as a recovering addict at a Celebrate Recovery service at Maryville First United Methodist Church. 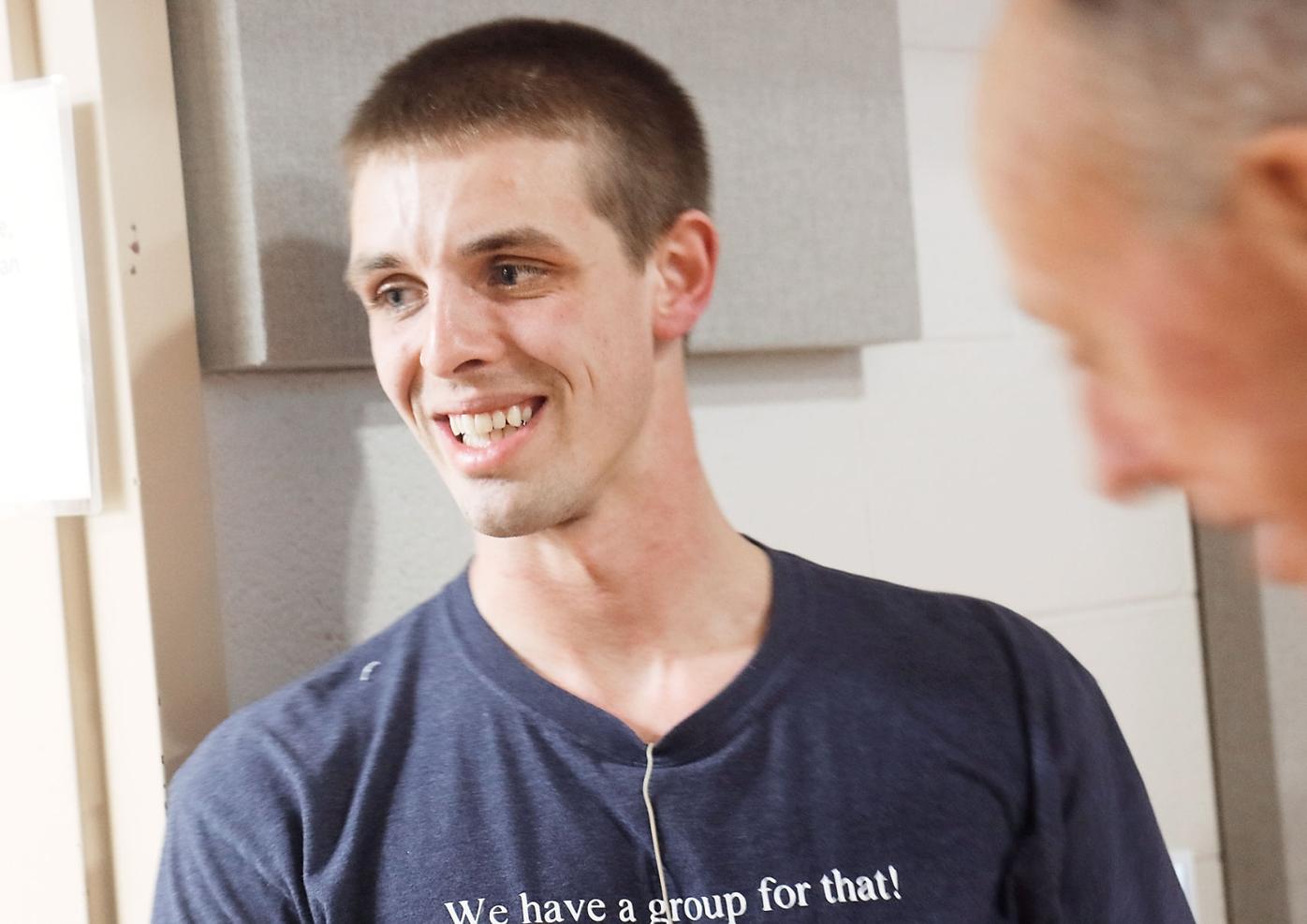 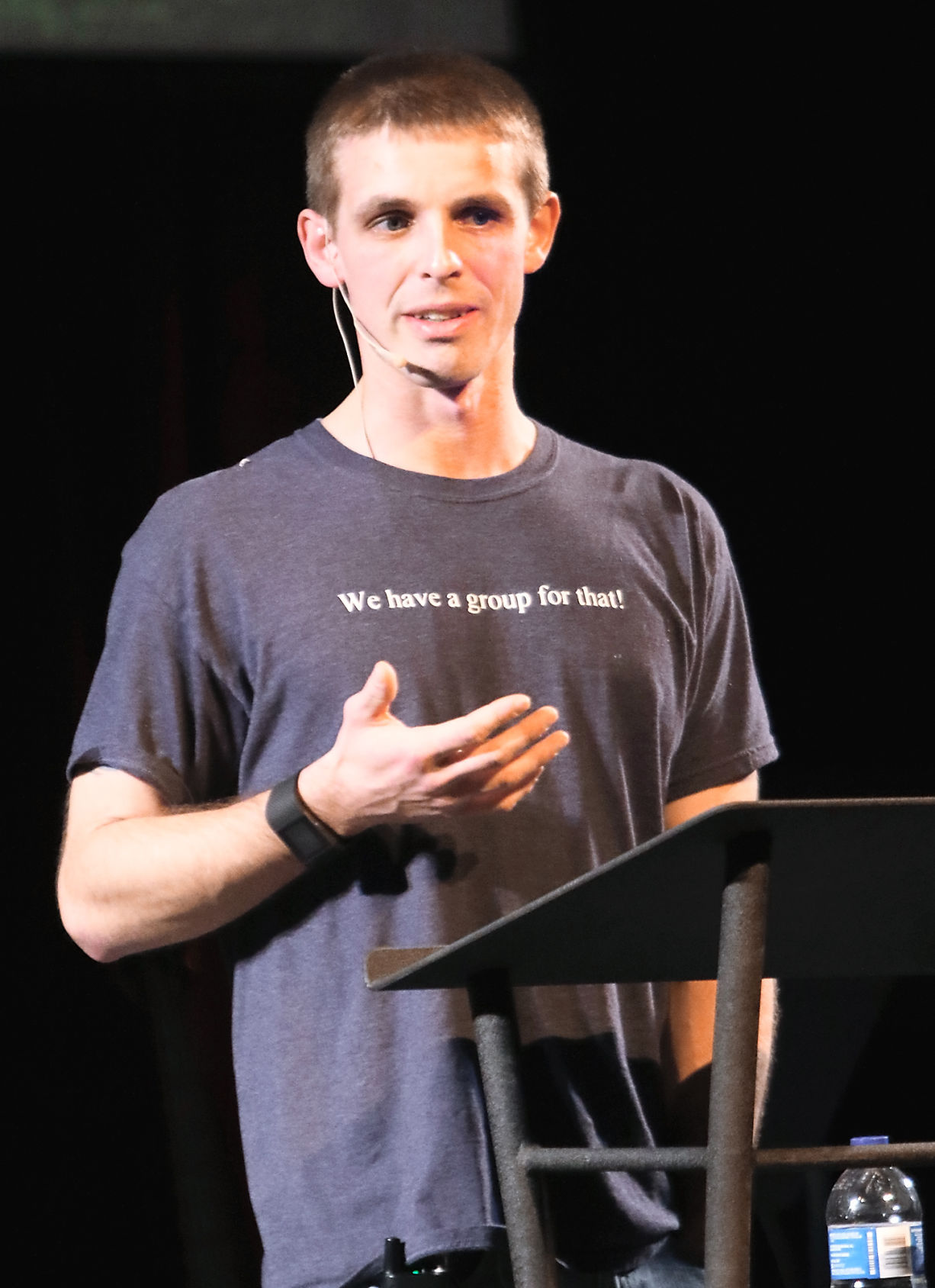 Matt Hall serves as guest speaker at Celebrate Recovery. He has been selected as the 2017 Appalachian Trail Chaplain for Holston Conference of United Methodist Church. 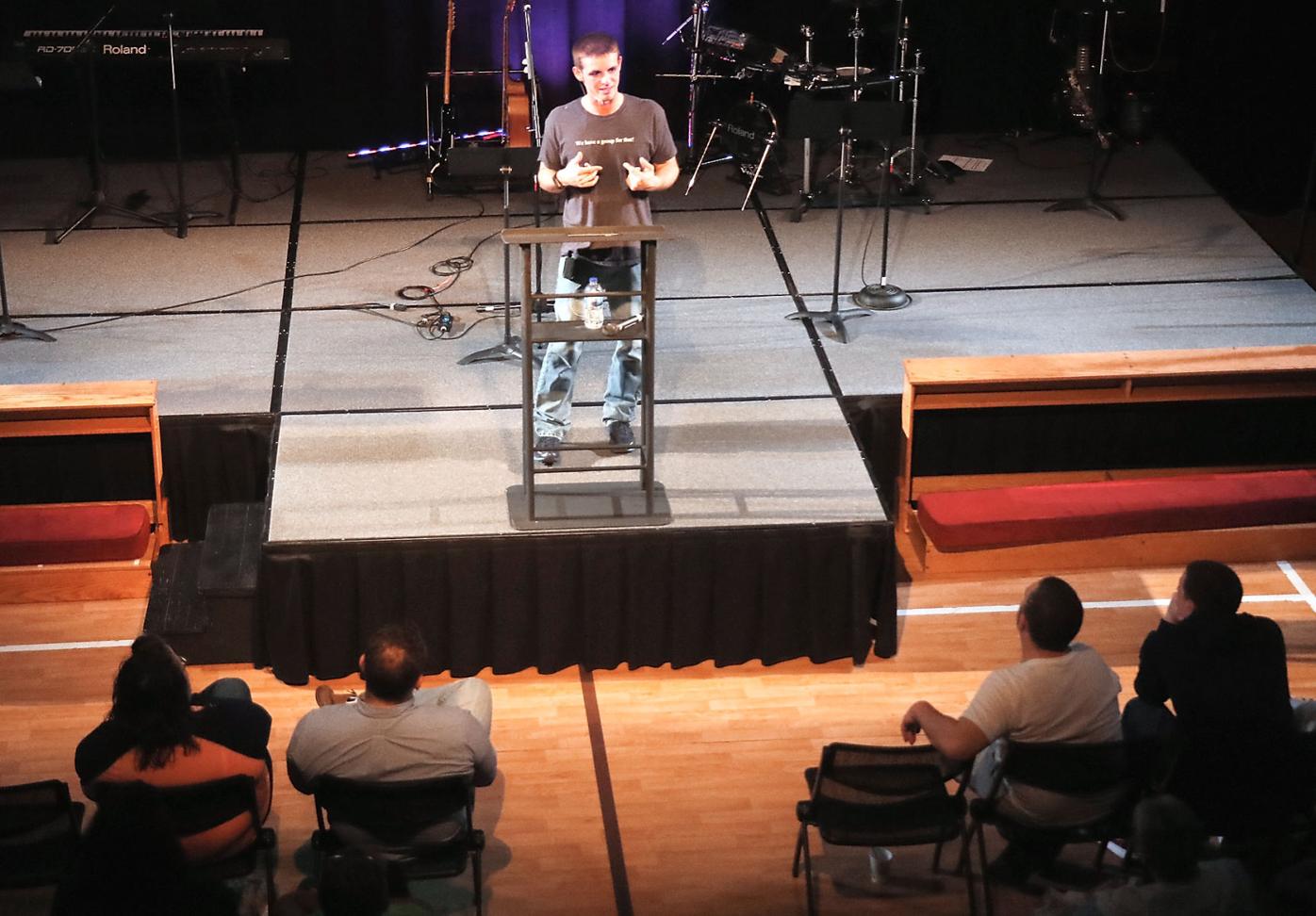 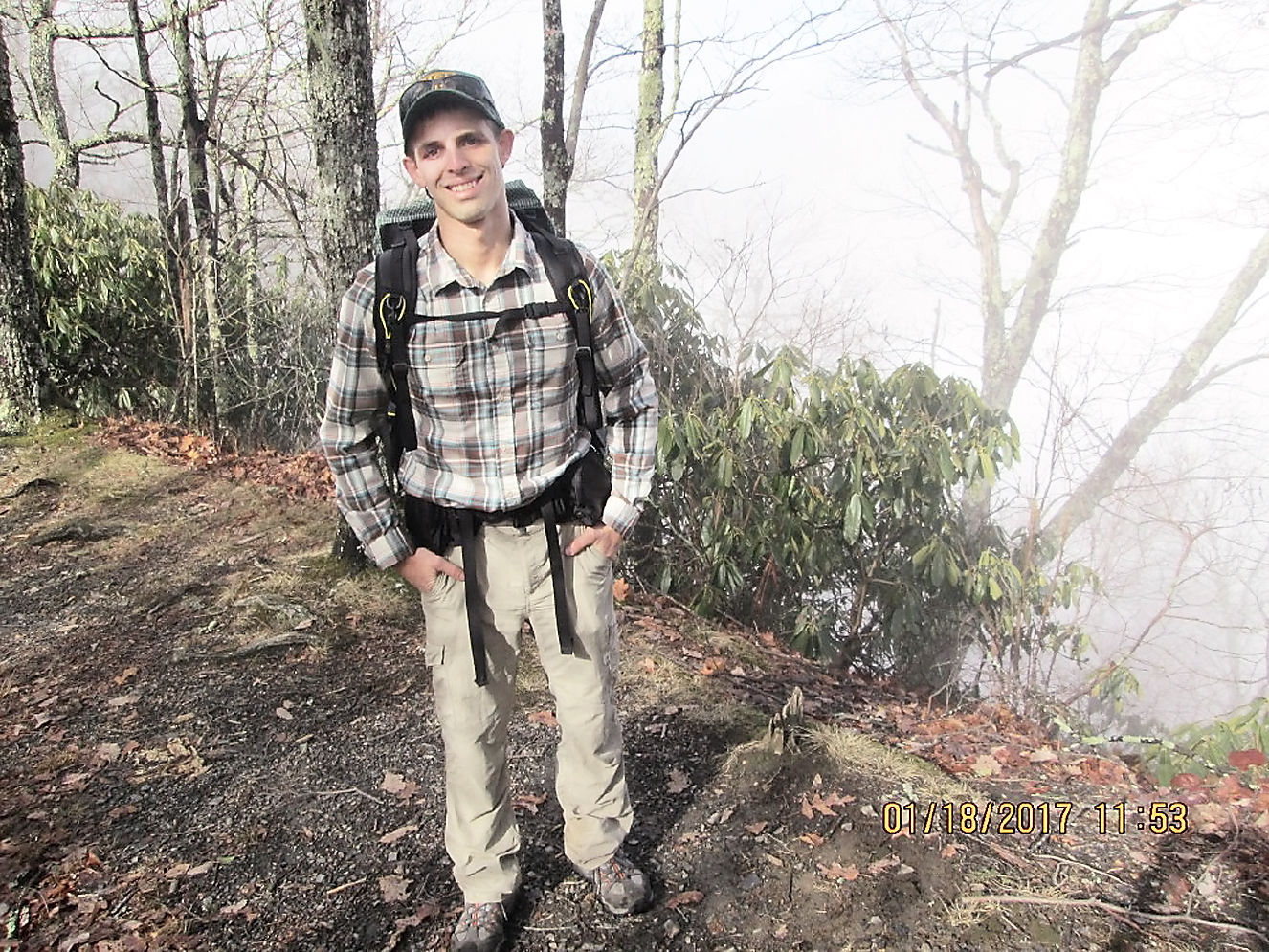 Matt Hall takes a hike in the Great Smoky Mountains during his visit to Blount County.

Matt Hall, 26, talks about his experience as a recovering addict at a Celebrate Recovery service at Maryville First United Methodist Church.

Matt Hall serves as guest speaker at Celebrate Recovery. He has been selected as the 2017 Appalachian Trail Chaplain for Holston Conference of United Methodist Church.

Matt Hall takes a hike in the Great Smoky Mountains during his visit to Blount County.

“And now these three remain: faith, hope and love. But the greatest of these is love.” 1 Corinthians 13:13

Call him crazy, but 26-year-old Matt Hall will be strapping on a backpack and hiking boots to embark on his six-month journey into the woods known as the Appalachian Trail. It will be his first as a thru-hiker and as the 2017 Appalachian Trail Chaplain for the Holston Conference of the United Methodist Church.

Hall was the guest speaker at the Celebrate Recovery meeting Wednesday night at Maryville First United Methodist Church. This resident of Virginia and a leader in his church, Out of the Box Worship Center, shared what his life in addiction looked like and what he hopes to accomplish out on the trail.

“It was a vicious cycle that only people like me understand,” he said. Hall was sitting in a rehab center in Roanoke, Va. after spending three weeks in jail for distribution of methamphetamine. His downward spiral started with alcohol and then pain pills after he broke his neck.

“I am sitting in a rehab thinking my world has ended,” Hall told the audience. “Then somebody gave me the AA (Alcoholics Anonymous) Big Book.”

He was in active addiction for six years before choosing to get clean. His goal as a Christian is now to help others remove the obstacles in their lives that prevent them from seeing and knowing Christ.

It was no easy journey, from addiction to this new life of hope, Hall told the crowd. He said he grew to resent other people in his life and even himself. “Resentment is nothing more than recycled anger that I had decided to hang onto,” he said.

Learning from those who know

Then he got a great piece of advice from the Big Book and started praying for those people he resented. Not that their brakes would fail as they drove down a steep hill. Prayers for them like the prayers for himself.

It worked, Hall said, although it took some time.

“Then I kind of resented that I didn’t have resentments,” he joked.

There were days when his only prayer was that he make it through one more day. He wanted to get through 24 hours without thinking about using.

With the help of the 12 steps and his faith, Hall has been sober for almost four years. He started a recovery program at Out of the Box Worship Center in Hillsville, Va. two years ago. He is now working to establish a recovery ministry in prison.

Hall had to apply for this job as 2017 Appalachian Trail Chaplain. He is a runner and keeps in shape. He’s been doing some hiking in the Smokies and went out on an overnight hike while here in Blount County.

Getting the right fit

The selection process involves answering questions on why the applicant wants to hike the AT, their physical condition and how they will react to encounters with others who don’t share their faith, said Bob Hayes. He is one of the members of the board who decides who is chosen to serve as chaplain.

“We just want the chaplain to share the love of Christ with people on the trail,” Hayes said. “Maybe lend a listening ear. If somebody wants the chaplain to tell his faith story, he will do that.”

Pushy, aggressive and combative — these are not the traits they are looking for. Hayes said the Holston Conference has found the right guy in Hall. He isn’t an experienced hiker, but being a runner puts him in the physical shape he will need to be in.

Hall is also a people person, Hayes said. He is approachable, nonjudgmental, enthusiastic, likable and has a sense of humor.

One foot in front of the other

The 2,000 mile trek for Hall will start in June, in Maine and he will walk the 14 states that make up the AT. He has plans to become a United Methodist minister and has started the ordination process.

Hall said when he was in the throes of addiction, he had to learn how to dream again and to love himself in order to love others. The people in his recovery programs helped with that.

“They loved me until I could figure out how to love myself and that took longer than I thought it should,” Hall said.

This AT adventure is one of Hall’s dreams. He is motivated by others who tell him he’s crazy for considering such a challenge. He rode a bull once to celebrate five years without a broken neck.

“I like doing things that are a little adventurous,” he said. “It’s a great conversation starter. I can go into a Western store and talk about riding a bull now.”

Some look at the journey as six months in the woods with your lunch in a sack, your home in a bag, he said. For Hall, he expects there’s a whole lot more to it.

“Really what it’s about is finding people where they are and loving them and figuring out the best way to be of service to them,” Hall said. “That is kind of what Jesus did.”

Being out in nature is just one giant plus, this chaplain said. He’s not an experienced hiker but he feels up to the challenge. “I’m ready to take it all in.”