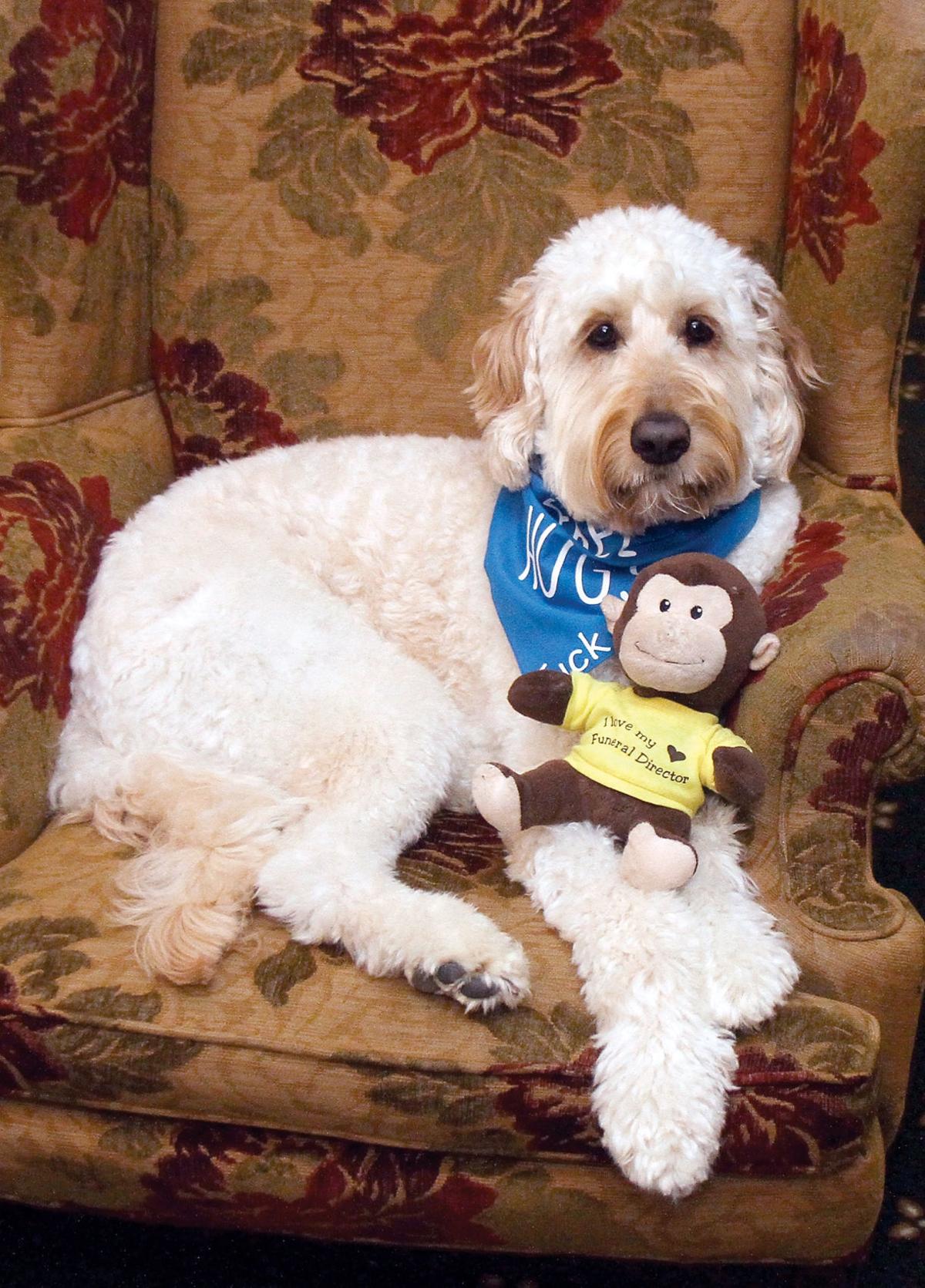 Tuck has a favorite chair near the door of Smith Funeral and Cremation Services where he likes to sit and greet visitors. 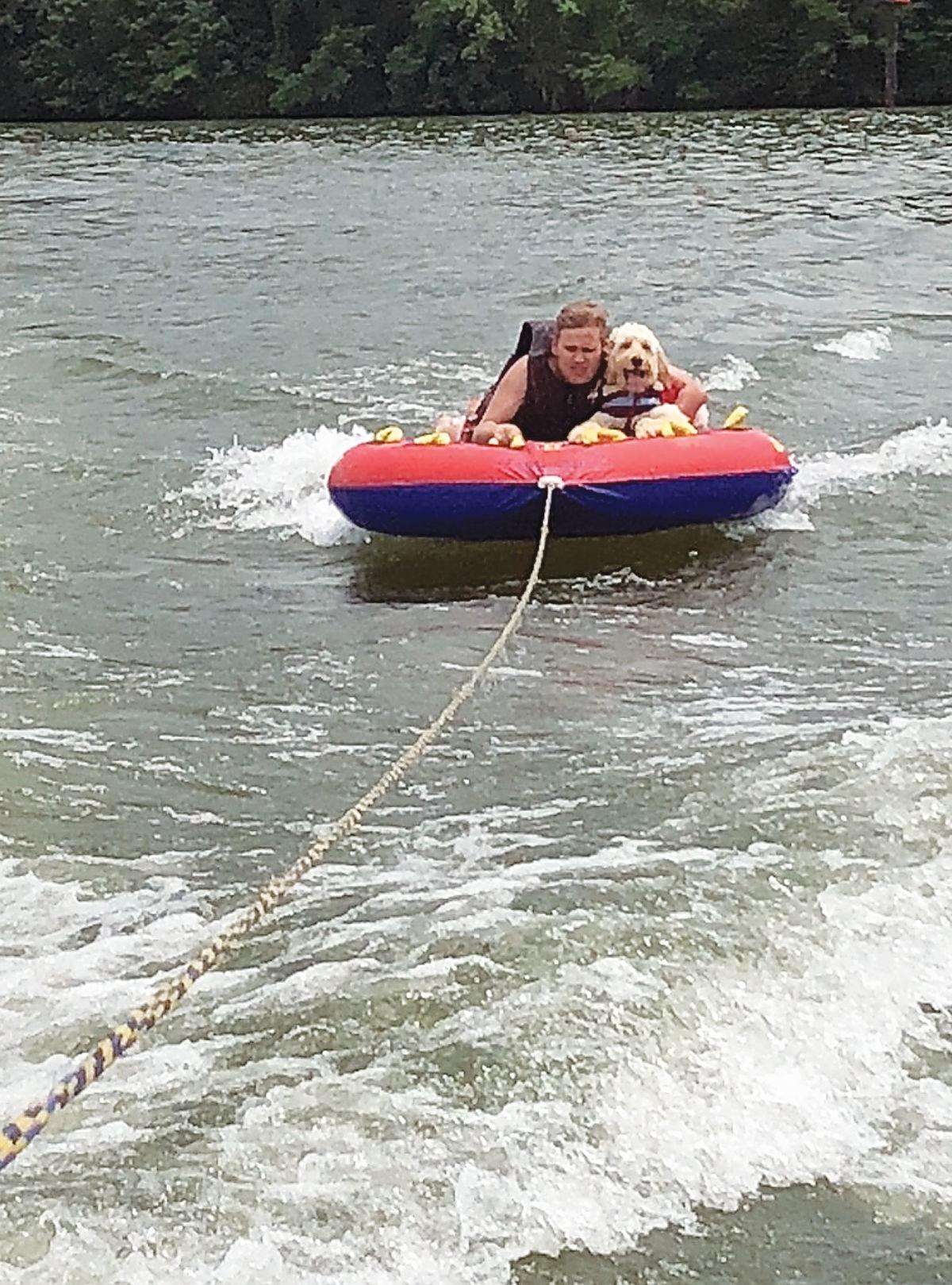 Tuck the comfort dog tubing on the lake. He has been part of the Smith Funeral and Cremation Services staff for two years. He provides calm to those who are grieving. 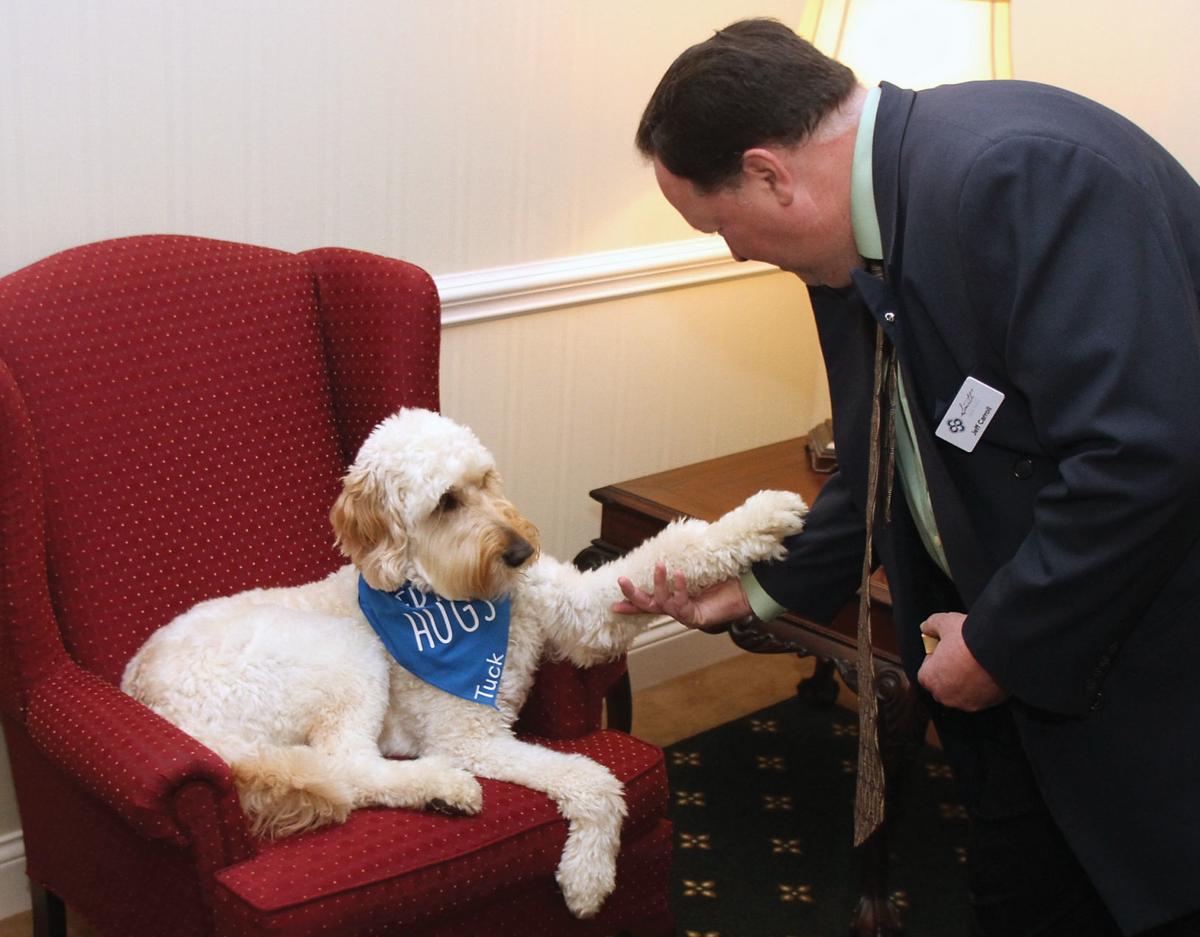 Jeff Carroll gets a handshake from Tuck, the comfort dog, at Smith Funeral and Cremation Services. 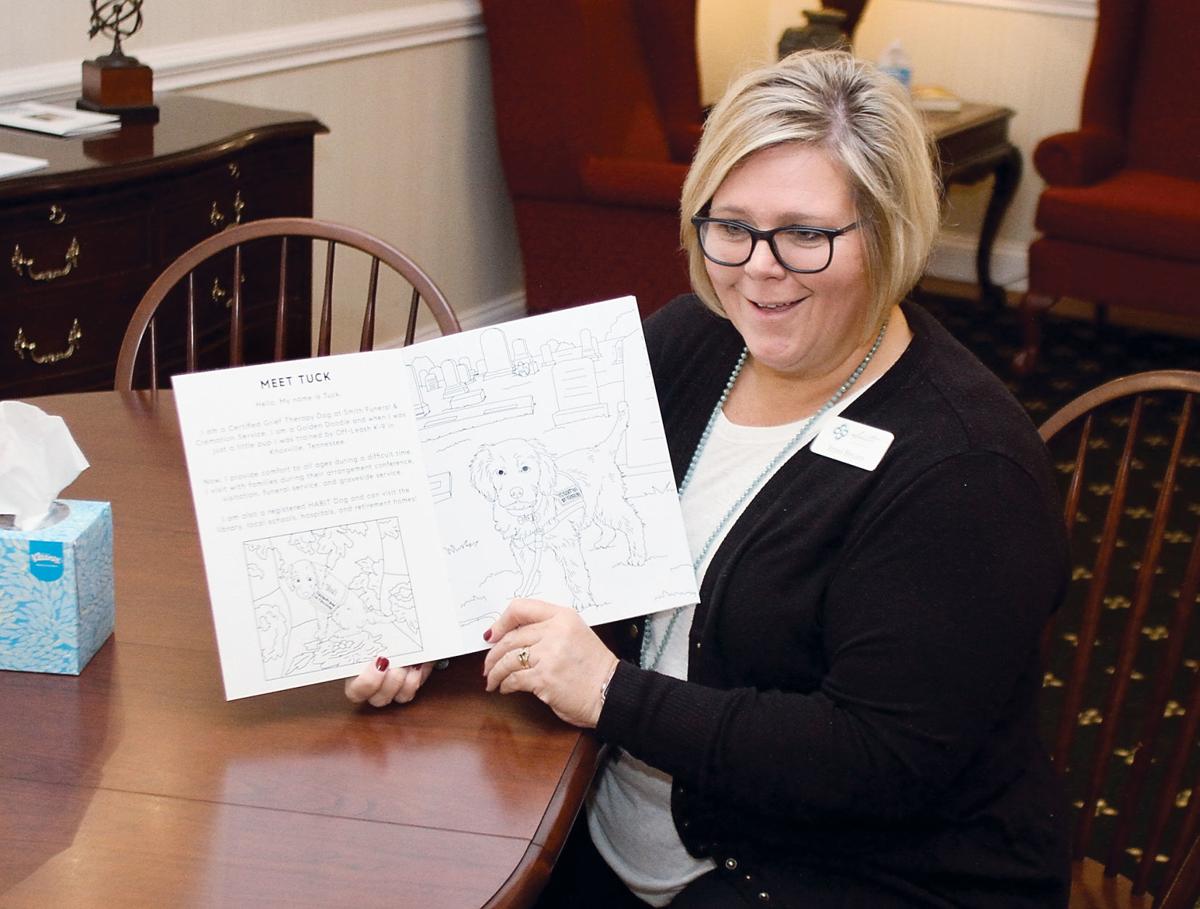 Jenni Bryant shows the coloring book about Tuck at Smith Funeral and Cremation Services in Maryville. Kids love to interact with the comfort dog. 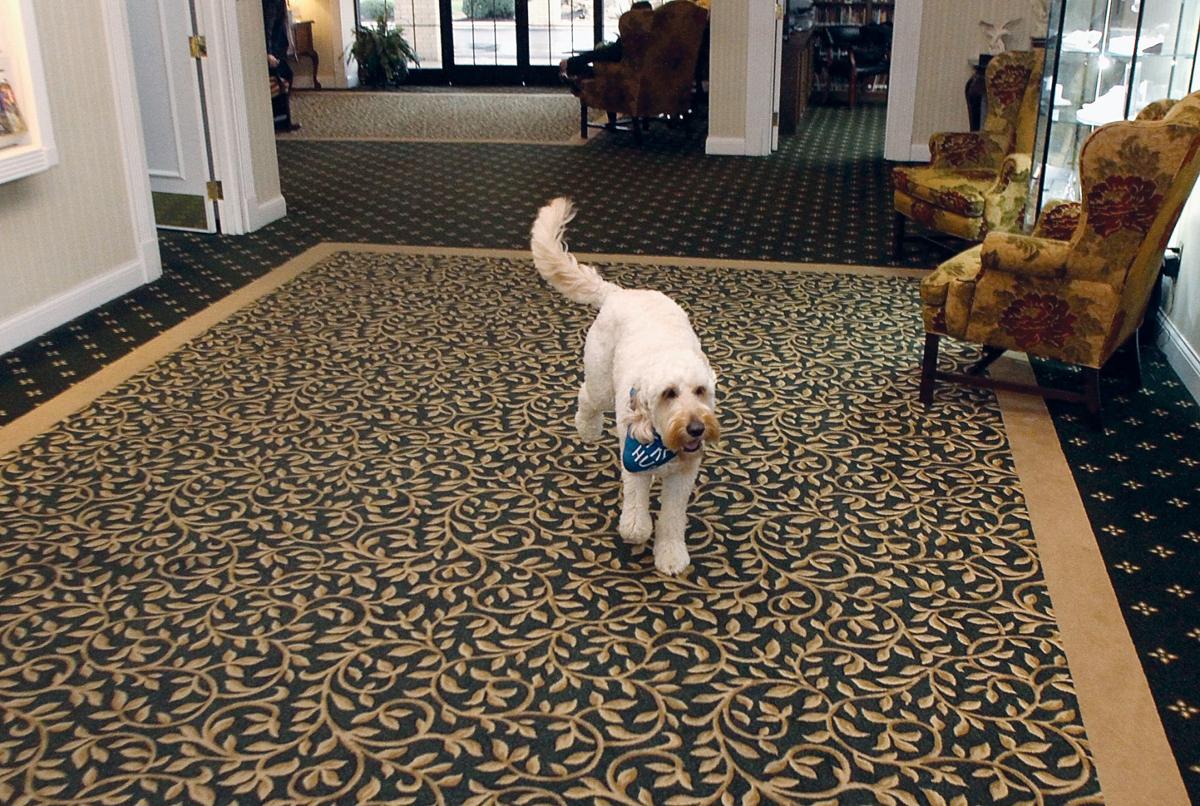 Tuck walks through the lobby at Smith Funeral and Cremation Services. He has his own office, complete with bed and snacks.

Tuck has a favorite chair near the door of Smith Funeral and Cremation Services where he likes to sit and greet visitors.

Tuck the comfort dog tubing on the lake. He has been part of the Smith Funeral and Cremation Services staff for two years. He provides calm to those who are grieving.

Jeff Carroll gets a handshake from Tuck, the comfort dog, at Smith Funeral and Cremation Services.

Jenni Bryant shows the coloring book about Tuck at Smith Funeral and Cremation Services in Maryville. Kids love to interact with the comfort dog.

Tuck walks through the lobby at Smith Funeral and Cremation Services. He has his own office, complete with bed and snacks.

He doesn’t shed, isn’t too picky about his treats and can turn a sad face happy at least for a little while.

His name is Tuck, a Goldendoodle who’s been “hired” on as grief therapy dog at Smith Funeral and Cremation Services in Maryville. Tuck bas been on the job for two years, the idea of Funeral Director and embalmer Jenni Bryant. The male dog arrived when he was just 7 weeks old and spent two weeks in training at Off Leash Canine Training in Knoxville.

This employee’s pay comes in the form of treats and hugs.

He has made a place and name for himself there at the front door of Smith’s. His chair is situated to be one of the first things people will see. Most often Tuck will be there with his favorite toy, napping, but when the door opens, he’s ready to greet visitors and bring smiles at a most difficult time.

But, when most people see the cuddly, furry, pooch and experience his calm demeanor, something good happens. It doesn’t matter it the person is 2 or 92.

“For just a minute, it takes the edge off,” Bryant explained. “It is not going to heal anything or cure anything but it does provide comfort. Animals just have a special way about them.”

Smith’s had started thinking about getting a grief therapy dog two years before they started the process. When Bryant started inquiring, she found only two funeral homes that offered the service — one in New York and one in Missouri. She did her homework to learn which breed would best suit the needs of the funeral home.

The right dog for the job

Goldendoodles are hypoallergenic, which means they don’t shed. That’s important to people coming in who wear dark clothing, Bryant said. Large dogs seem to be more comforting than smaller ones, Smith’s discovered. As for color, they read research that said people who are afraid of dogs are more afraid of dark-colored ones.

They ended up getting Tuck from a breeder in Walland; he was one of 11 in the litter. Bryant said she knew they wanted a male. She chose the most laid back puppy who seemed not to be phased by the chaos around him.

Tuck is white and just the right size for those needing a snuggle. Bryant said he is the most laid back dog who is content to just chill with whoever’s in the room. They chose the name Tuck because the funeral home is located on Tuckaleechee Drive.

Smith’s was the first funeral home to equip itself with a comfort dog in Tennessee. There are now others.

“They just waited on us,” Bryant said. “They have called us and asked where we got him and what we did.”

While Tuck does belong to the funeral home, he lives with Bryant and works on her schedule. That means he is there in the evening for visitations. He can go into the chapel if a family requests it. Tuck also goes to the cemetery, providing comfort to families there, too.

Being in places where quiet is a must, Tuck is perfectly contest to sit on a pew and lay his head down or spend time with children away from the service in the waiting area just outside. The only time he barks is when he needs to go outside, his caretaker said.

He even has his own coloring book, filled with pages of himself, from puppy days on up. Children who find it hard to keep quiet in the services can sit with Tuck and draw.

The dog who has become so popular in the community is classified as a mutt, Bryant pointed out, since American Kennel Club doesn’t recognize the breed. A Goldendoodle is a Golden retriever/poodle mix. No one at Smith’s seems to mind the exclusion from AKC.

“There is just something about a Goldendoodle,” Bryant said.

Some coming to grieve bring animals with them. When someone dies, their pets just know, Bryant said. Tuck is also here for them.

“Tuck loves friends,” she said. “He comforts the dogs that come in, too.”

Even after families have laid their loved ones to rest, they sometimes return to Smith’s to visit Tuck. He gets Christmas presents and birthday treats. People show up with treats in their pockets and purses.

If someone does come into the funeral home and prefers not to be around dogs, Tuck has his own office where he can take a nap or play with his toys.

It’s not just members of the community and their grief that Tuck seeks to lessen. Bryant said the staff at Smith’s has tough days in this business. Tragic deaths including those of young people can take a toll. Tuck helps the staff as much as other people.

And because he is good at what he does, Tuck is also certified as a Human Animal Bonding in Tennessee dog. Animals in that program make visits to hospital, cancer centers and nursing homes.

Just like humans, this furry employee needs and enjoys his down time. He loves to swim, Bryant said. He also can’t wait for warm weather so he can go tubing behind his family’s boat.

Those who are now totally intrigued by his antics can follow him on Instagram at Tuck Comfort Dog.

Before Tuck, Bryant had a toy poodle. She said being the caretaker of Tuck is like being his mom.

“He goes everywhere I go,” she said. “Everywhere. But he doesn’t pitch a fit for a toy at the grocery store.”