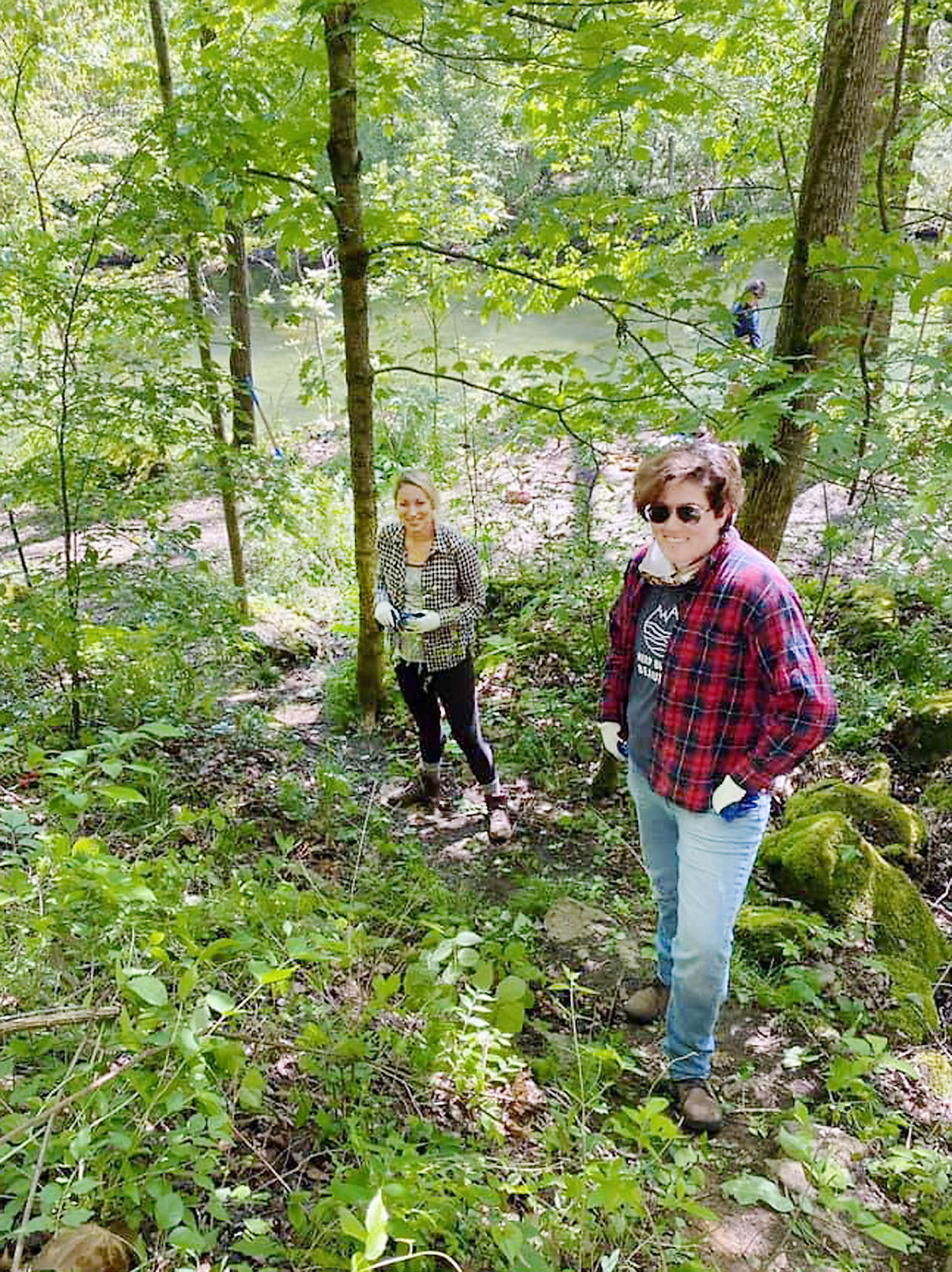 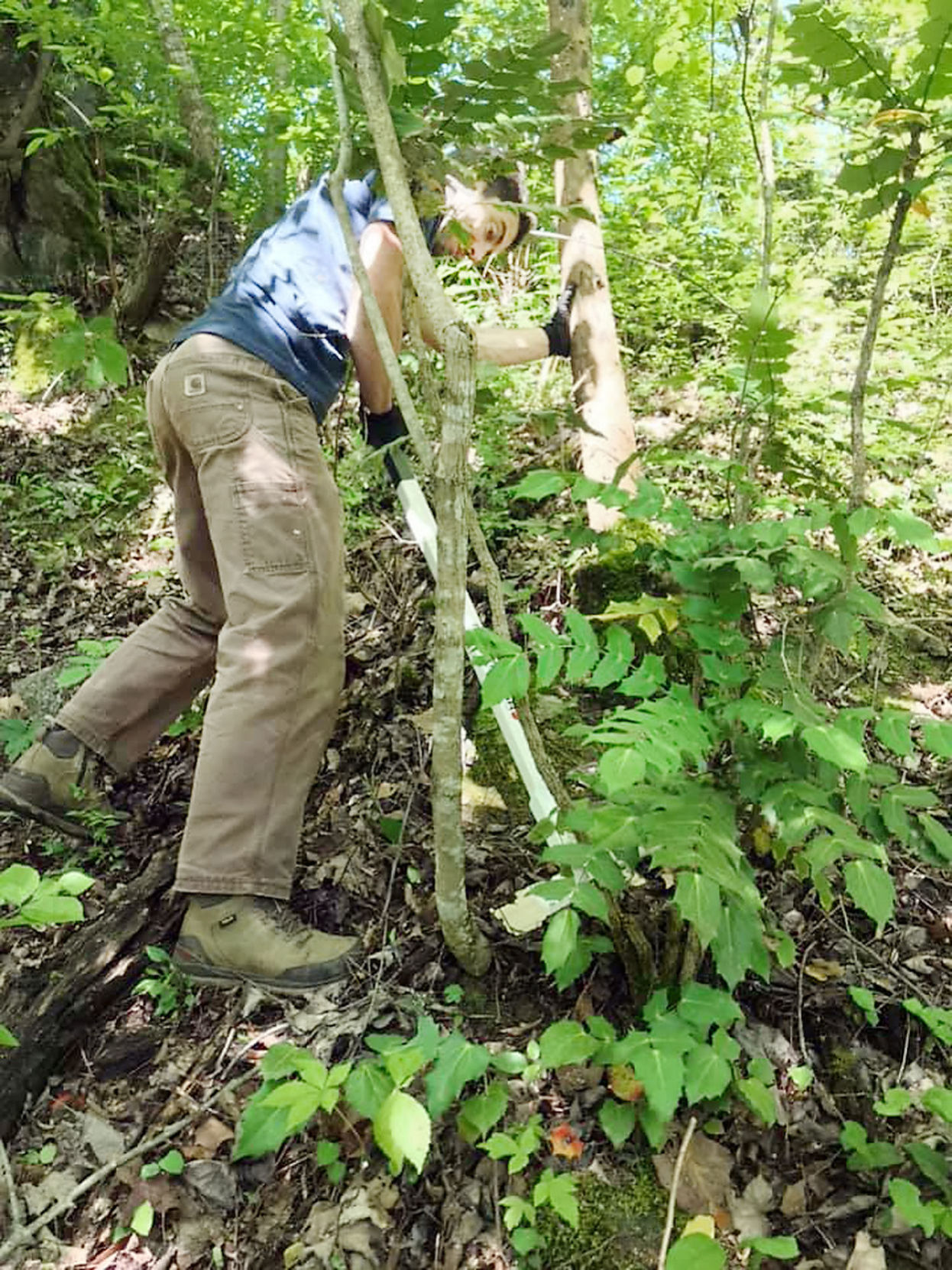 A volunteer helps clean invasive plants from Townsend River Walk on May 9. It is a never-ending job to control the fast-growing plants that are not native to our area, officials said. 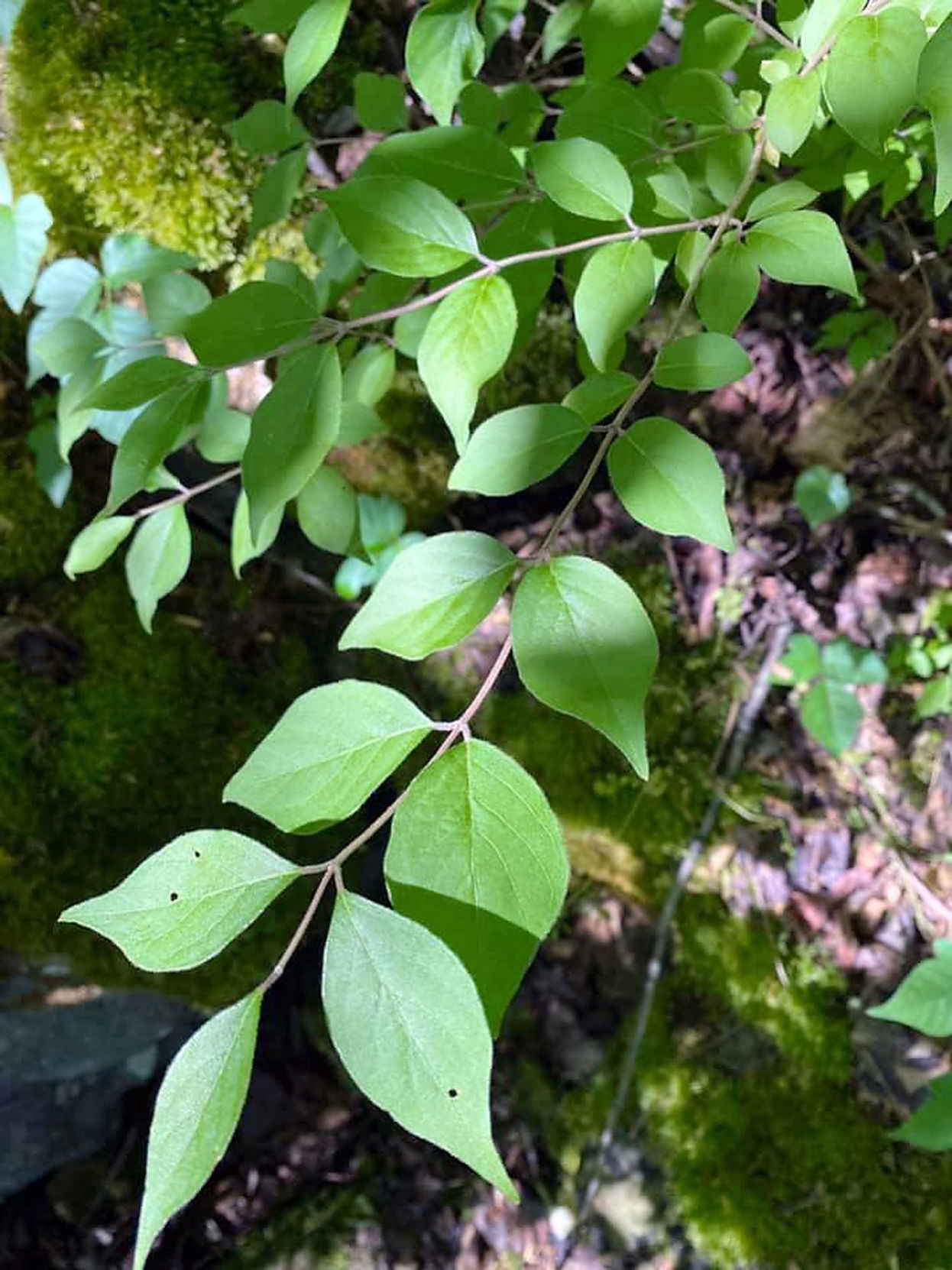 Some of the vegetation along Townsend River Walk. 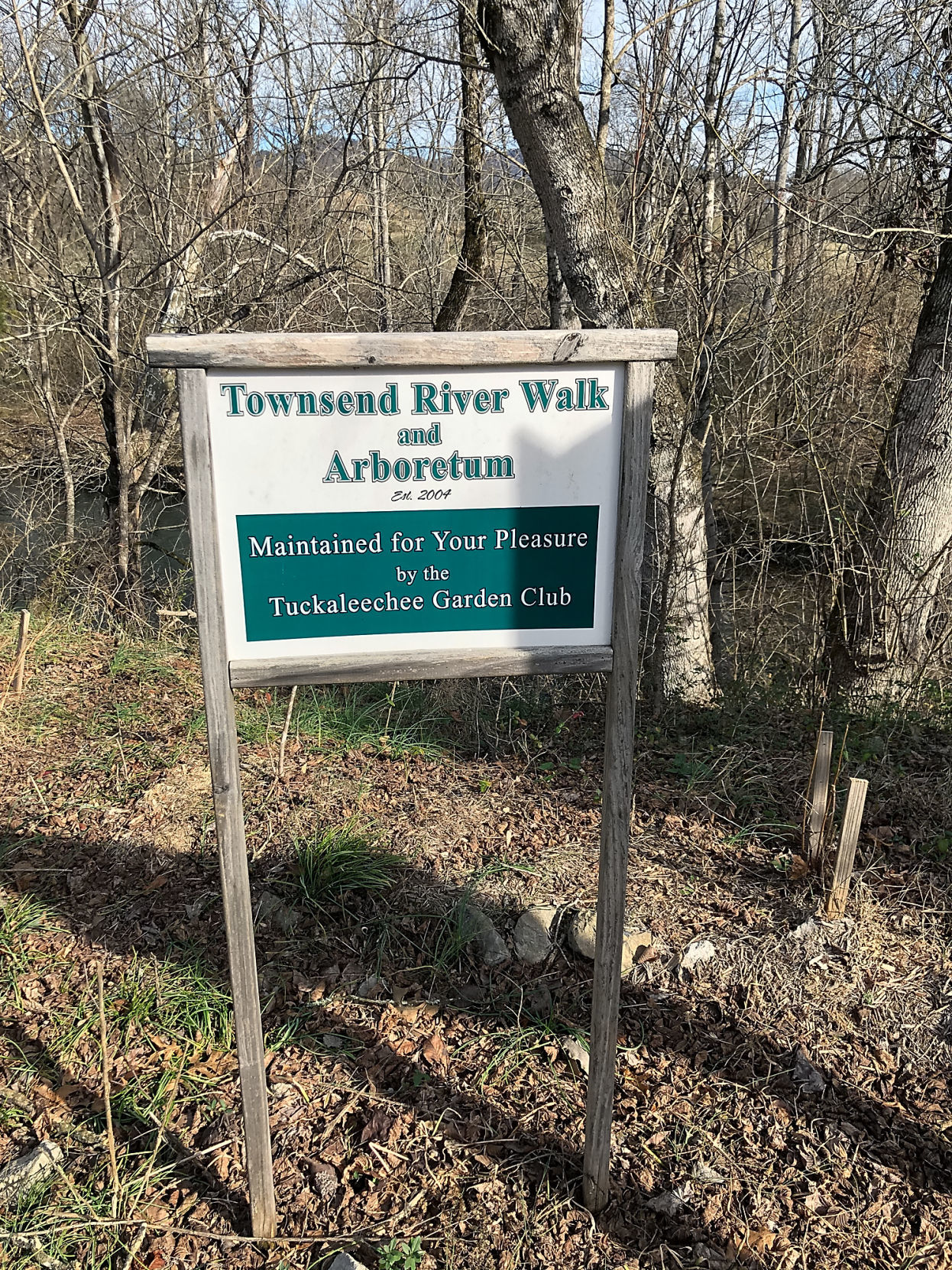 ThIS sign IS posted at the entrance to Townsend River Walk. 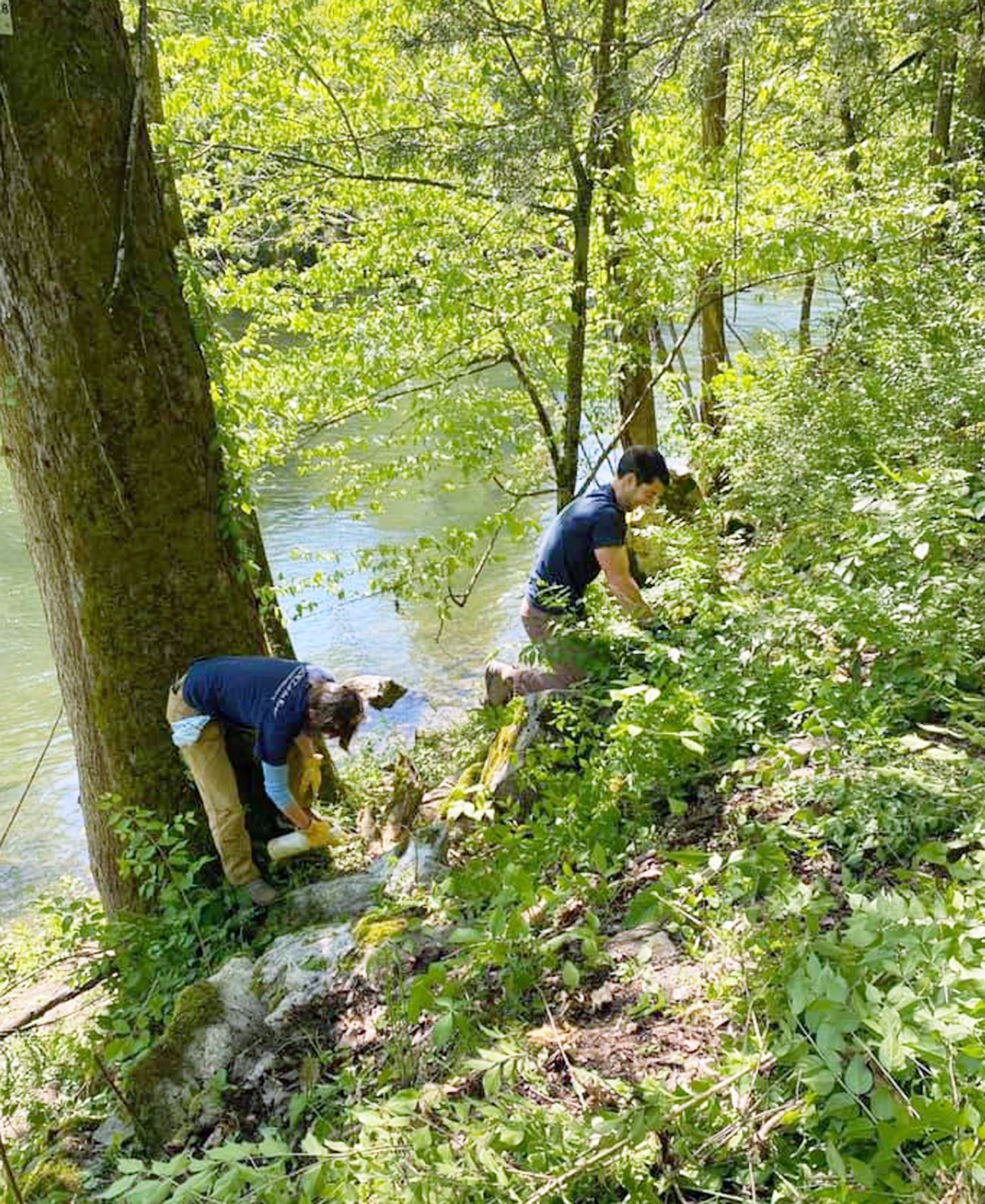 it was a nice Saturday when workers arrived at Townsend River Walk to get rid of non-native plants to make room for those that are native.

A volunteer helps clean invasive plants from Townsend River Walk on May 9. It is a never-ending job to control the fast-growing plants that are not native to our area, officials said.

Some of the vegetation along Townsend River Walk.

ThIS sign IS posted at the entrance to Townsend River Walk.

it was a nice Saturday when workers arrived at Townsend River Walk to get rid of non-native plants to make room for those that are native.

It was the task at hand for the two organizations, along with Little River Watershed Association, on May 9 as they gathered at a beautiful Townsend locale. LRWA members who participated included program coordinator Lydia Turpin along with board members Andrea Ludwig and Ryan O’Conner.

Three hours later, native plants were breathing a sigh of relief as they now had more room to grow.

Mark Seder is a member of Tuckaleechee Garden Club and was in attendance with Whipple and the others. He said the partnership between the three entities started in May 2019.

Since then, the job at the Townsend River Walk has been the same — to remove things which don’t belong there to give the things that do a fighting chance at survival.

He described a Japanese princess tree they have been fighting on the property. It looks like a pretty tree, he said.

“They had been there for at least 30 years,” Seder said. “They grow 20 feet in one year. They look pretty with their pink and purple flowers but they destroy everything.”

They have been dealt with, as well as some English ivy and other plants not native to the area. Whipple said the job is non-stop. An area might be cleared on one invasive plant and then another might take root in its place.

She said while they were working on May 9, the workers had the opportunity to clear invasives from the mouth of a cave.

“The cave was in front of the arboretum,” she said. “We spent a good deal of time cleaning our the invasive plants in front of that natural cave. You can really see it now.”

The trail was developed after the widening of Highway 321 from two lanes to four, which was also when the biking and walking paths were added. Tuckaleechee Garden Club, a member of the Tennessee Foundation of Garden Clubs, has taken responsibility for the trail’s maintenance. Keep Blount Beautiful also participates in efforts to keep the trail free from debris.

It is open to the public at all times and is handicapped accessible. It follows what was the Highway 73 route in Townsend.

Eradication of invasive species is an ongoing project for Tuckaleechee Garden Club, LRWA and KBB.

Invasive plants have been removed, including Ligustrum vulgare, the common privet, Lonicera speciels, the bush honeysuckle, Albinia julibrissin, the mimosa and Rosa multifora.

As the plants were being removed, the planting of native ferns and wildflowers began. Coneflowers and sunflowers were planted around the entry signs. Some of what was planted even came from the yards of garden club members.

Some of what visitors will see now along the route include columbine, purple asters, alumroot, native violets, ironweed, black-eyed susans, butterfly milkweed, coneflowers and irises.

The Blount County Master Gardeners Association has assisted in plant identification and research into invasive tree and shrub removal. Members spend more than 500 hours a year working on the trail.

A walk along the trail provides an education with its tree identification system along the way. The arboretum has 35 signed trees. Each species is marked with a sign that gives specific information, including a QR code that can be scanned with a mobile device to obtain more information. Each tree is also tagged.

Some of the trees which will seen along the way include pecan, big leaf magnolia, black oak, black cherry, winged elm, American sycamore, northern red oak, boxelder, American holly, sweetgum, sugar maple, pawpaw, black walnut, tulip poplar, bald cypress and green ash. Work on the arboretum began in 2008. After three years of dedication from garden club members, the Townsend River Walk was certified as a Tennessee Arboretum by the Tennessee Urban Forestry Council in 2001 and then re-certified in 2016.

Seder created the Townsend River Walk website (townsendriverwalk.com) and keeps it updated with photos and future projects. There are maps and lots of information about what is planted there. He and his wife moved to Walland five years ago and became master gardeners.

He said he loves working with Tuckaleechee Garden Club because of its knowledge base and dedication to the beautification of Townsend with the river walk.

Lots of progress has been made, he said. A pollinator garden is in the works.

“At one time, three or four years ago, you couldn’t even see the river because of so much privet and honeysuckle,” this gardener said. “It’s been gotten out of there. Now in spring, the wildflowers have just come back and made it their home. It looks more wild now.”