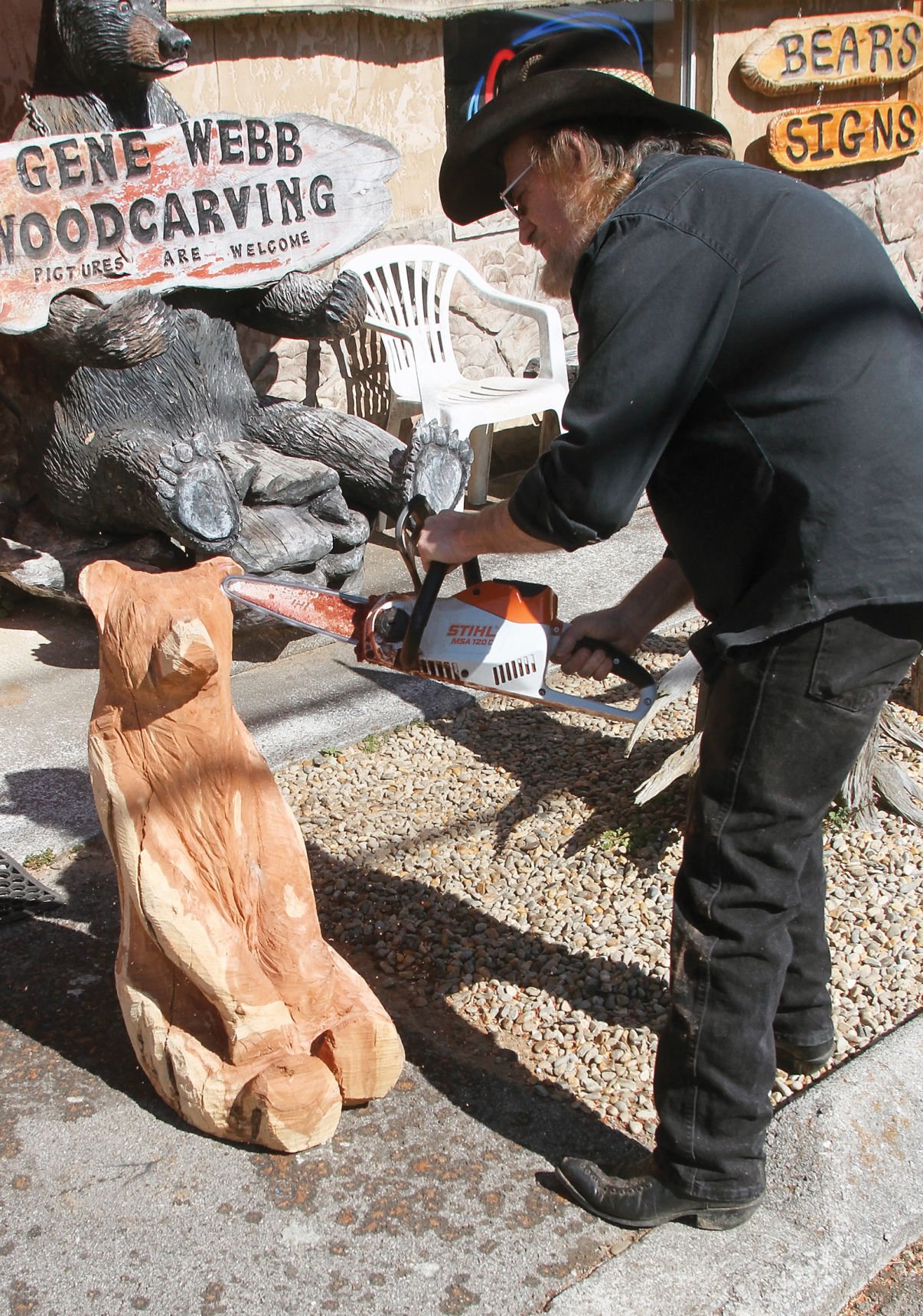 Gene Webb carves bears along with other animals. 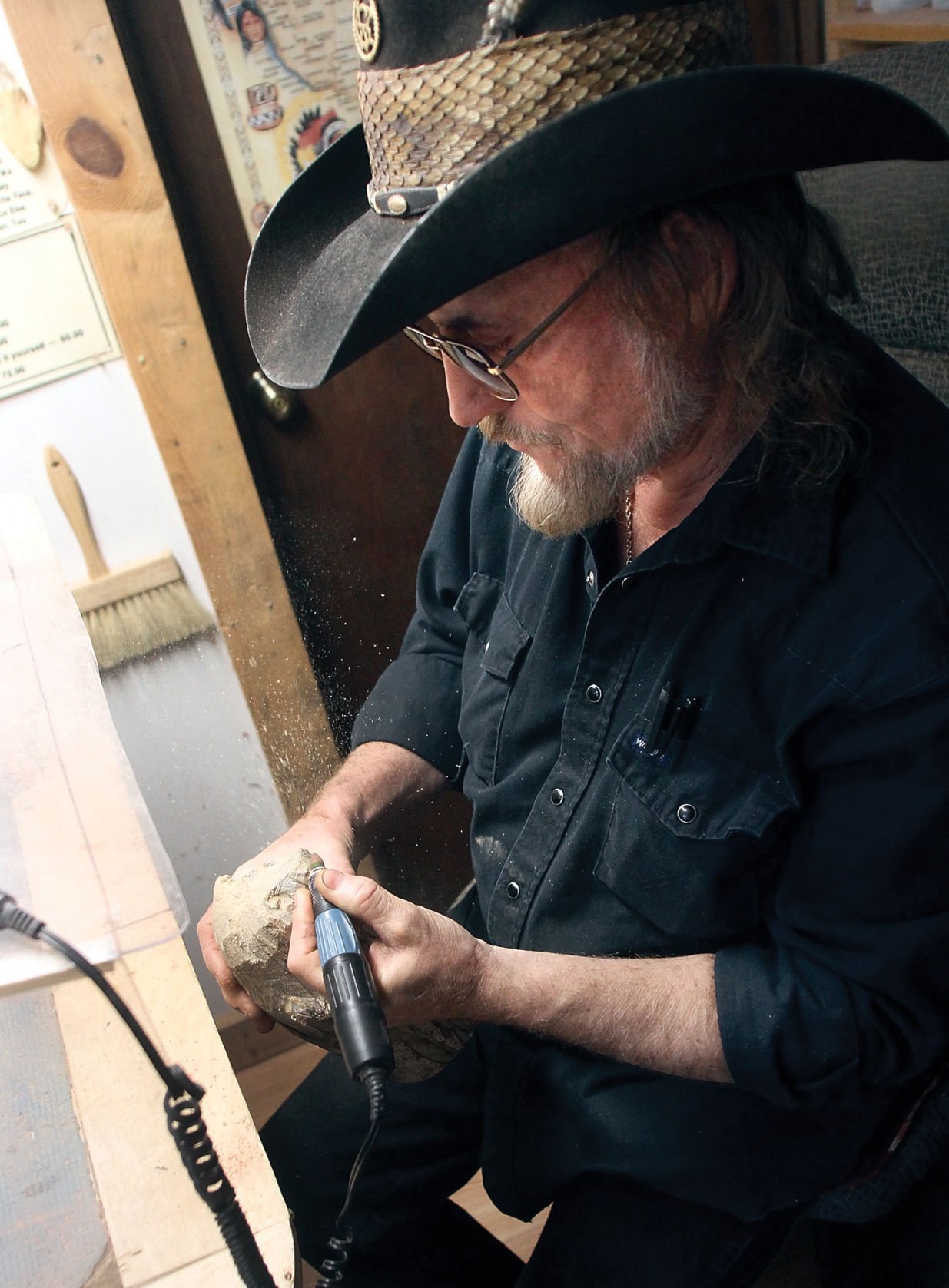 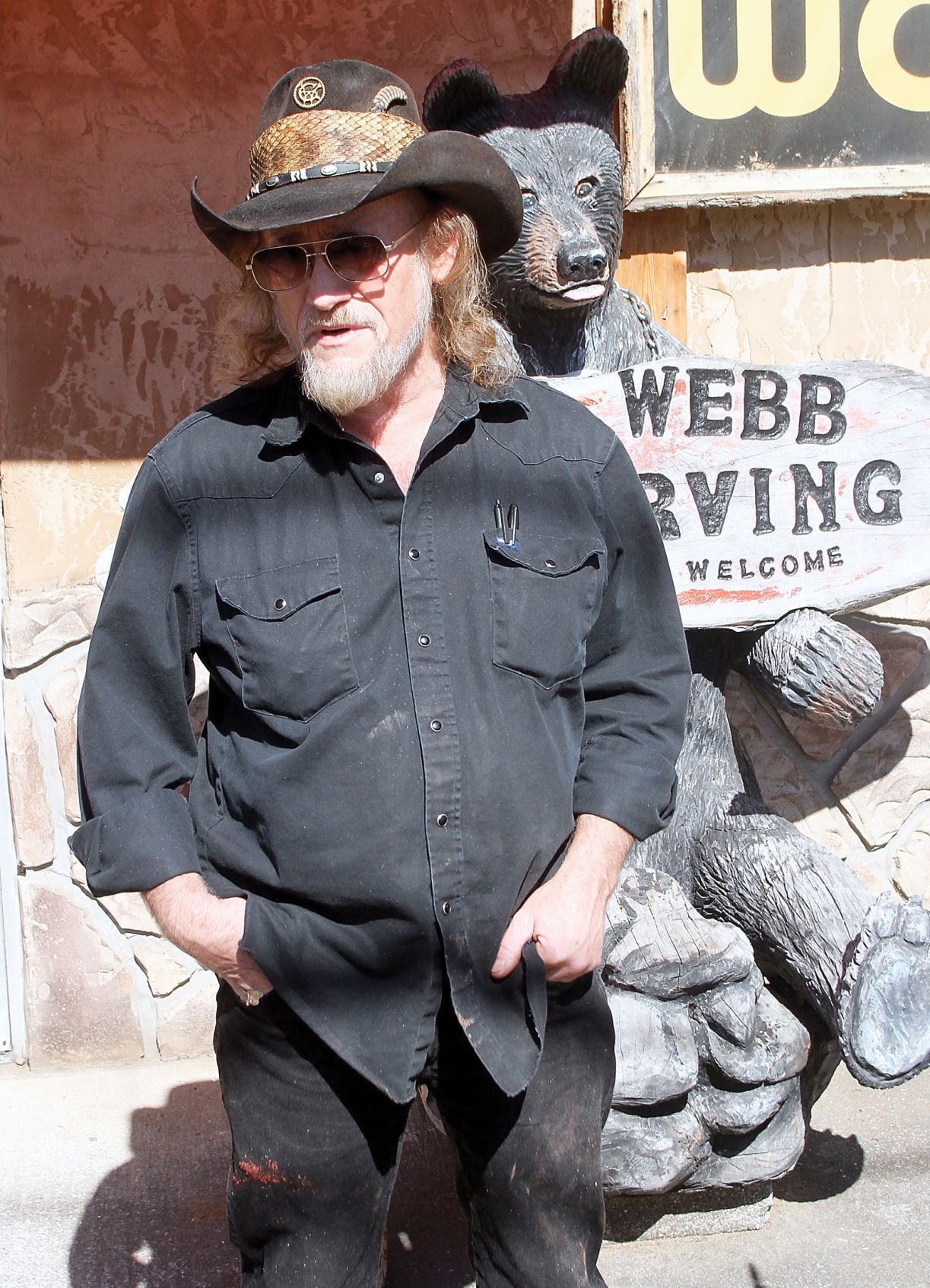 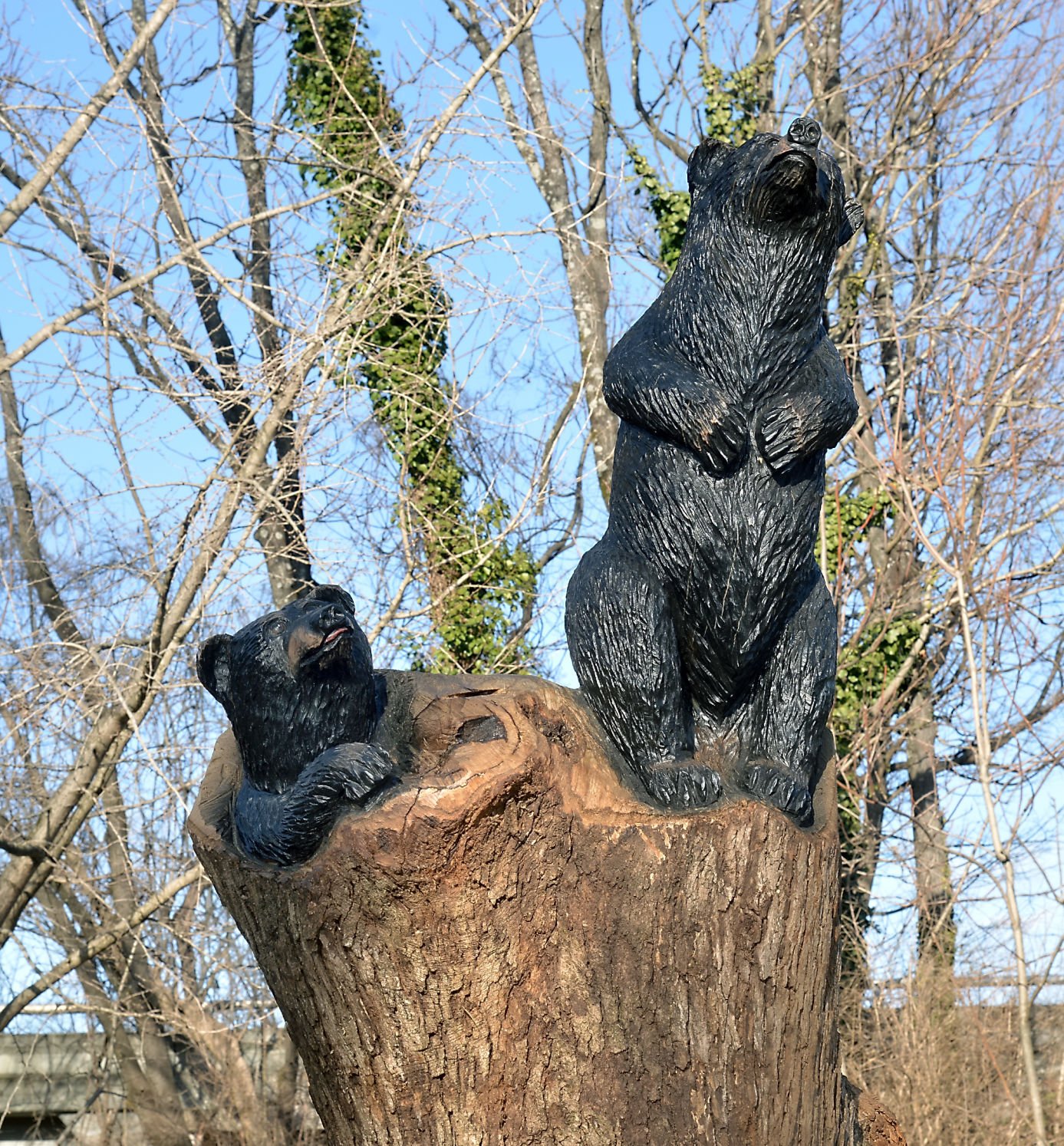 Townsend chainsaw sculptor Gene Webb’s work is on display on the Greenbelt between Court and College streets. 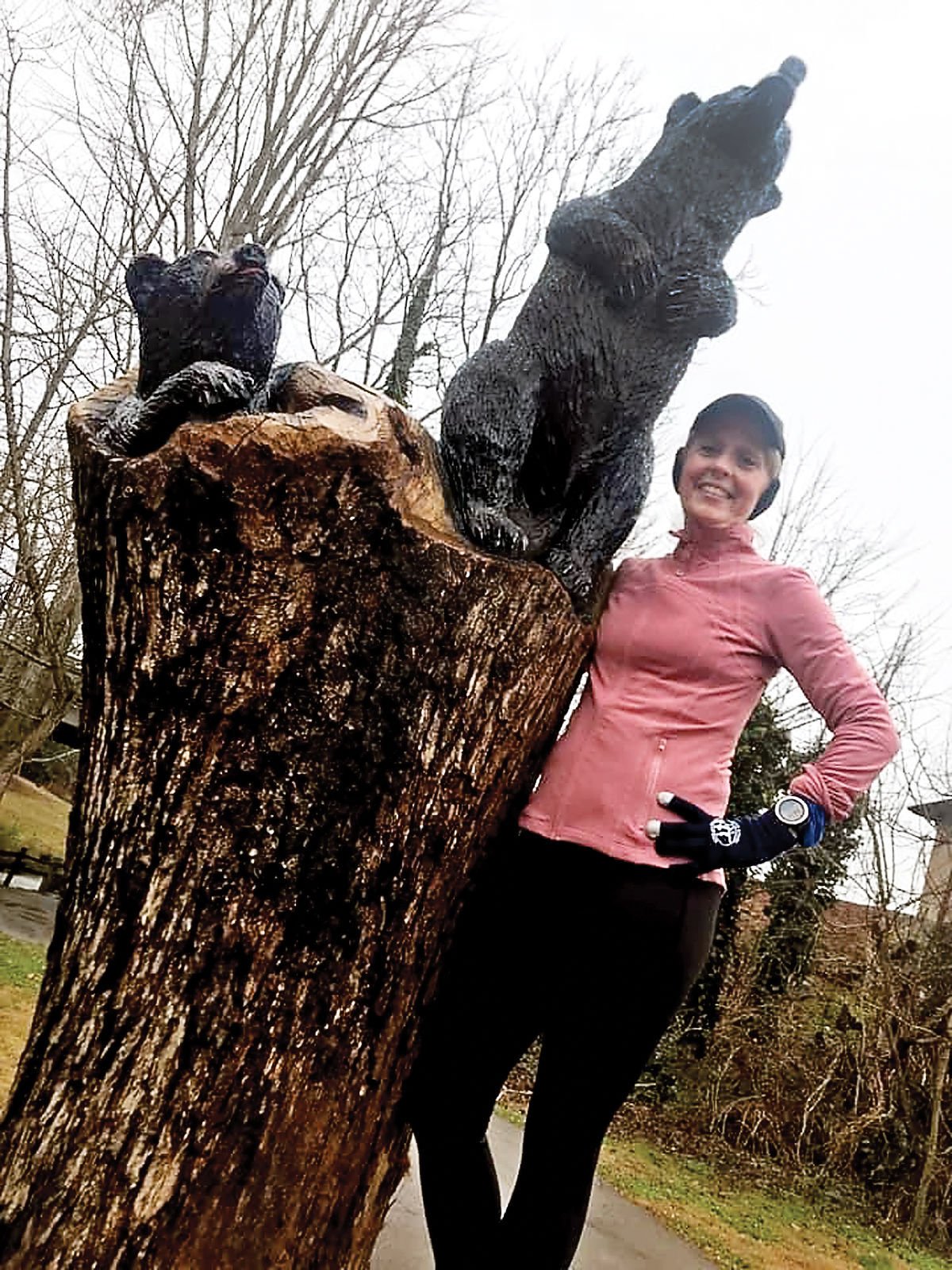 Jennifer Moore stands next to the sculpture that Gene Webb did using an old stump on the Maryville greenway.

Gene Webb carves bears along with other animals.

Townsend chainsaw sculptor Gene Webb’s work is on display on the Greenbelt between Court and College streets.

Jennifer Moore stands next to the sculpture that Gene Webb did using an old stump on the Maryville greenway.

As a woodcarver who’s carved thousands of pieces, from chickens to owls, Native Americans, religious icons and even the bust of Waylon Jennings, Townsend resident Gene Webb has come to know what Smoky Mountain tourists want to take back home.

They want bears. Bears cuddling their cubs, bears dressed in overalls and bears sleeping in logs. Not the real ones of course, but sculptures that are the next best thing.

He’s obliged, using a chainsaw to carve thousands that have ended up in all 50 states and across the world. The Townsend native who started out creating works of art from pine knots and cedar logs, is now 56 and still giving the people what they want.

A few months ago, then, when he was approached by Buzz Thomas to sculpt a set of bears using an old stump on city of Maryville property, Webb said yes. The former tree, said Maryville City Manager Greg McClain, was dying and had to be cut. It was located at the greenbelt trail between North Court and College streets behind Razberries.

“Buzz said he was out walking his dog one day and saw that hollow stump that was left and he thought it would be really neat if we could have it carved,” McClain said. “He said he would pay for the carving and we said yes. That’s when he reached out to Gene.”

The Public Works Department, overseen by Brian Boone, had left the tall stump there; Webb asked them to cut it and bring it to his location in Townsend. He spent the next several days sculpting two bears to add to the stump. Public Works then installed it at the trail location.

Walkers, runners and passersby noticed the piece of artwork immediately and photos began popping up on social media. Mitch and Jennifer Moore were going for a run when they stopped to snap some photos.

Thomas said he was extremely pleased with the finished work of art. “”I love what Gene did with our oversized stump,” he said via an email message. “It’s a great illustration of Appalachian artistry and a fun, whimsical addition to the greenbelt. I couldn’t be happier.”

Kelly Thomas and Andy Morton also had a hand in getting the work commissioned.

Webb’s woodcarving business/workshop, at 7625 E. Lamar Alexander Parkway in Townsend, is full of his artistry and that of a few others. On the wall are newspaper articles that span decades and several blue ribbons Webb won in woodcarving competitions. He said he started carving from old scrap wood when he was just 10. His first subjects were farm animals. His passion also has been these Smoky Mountains and what they contain.

Perhaps his favorite competition piece is that of a bobcat. It won worldwide attention. But there are others that hold special memories for him, such as Christ on the cross that he carved for a now-deceased uncle. Those are ones he will never part with.

Over the decades, Webb has taught hundreds of others his skills. He has some 20 videos. He previously worked for Smoky Mountain Woodcarvers and taught classes there. That building is now a bike rental place, Webb said.

While visiting Gatlinburg, visitors might spot some of his work in souvenir shops. His talents were used to create pieces that ended up in “Christy: the Movie,” which was filmed here.

Winter is the time when Webb takes walks in the woods in search of fallen pine trees that contain knots. He carves what he calls spirit faces into them. He is gearing up for his busiest time of year — summer and the arrival of visitors to the national park.

These days, Webb spends a lot of those summer months out in front of his business, examples of his work highly visible and a chainsaw in his hand. A tent will be erected soon in the parking lot to attract those casually driving by. Chainsaw art has become very popular, and this woodcarver can deliver. He points to a pile of logs over near his parking lot. The bear sculpture in the Maryville park was done this way.

White pine and cedar are favorite types of wood, but this artist said he isn’t picky. People frequently ask him what kind of wood he carves.

“Free” is his answer. People drop off piles on a regular basis.

With his remarkable talent, Webb likely could have chosen to live anywhere, but he never left his childhood stomping grounds. Staying here made perfect sense.

“I think it’s kind of neat to be in the Smoky Mountains with being an artist. There are a lot of artists here.”