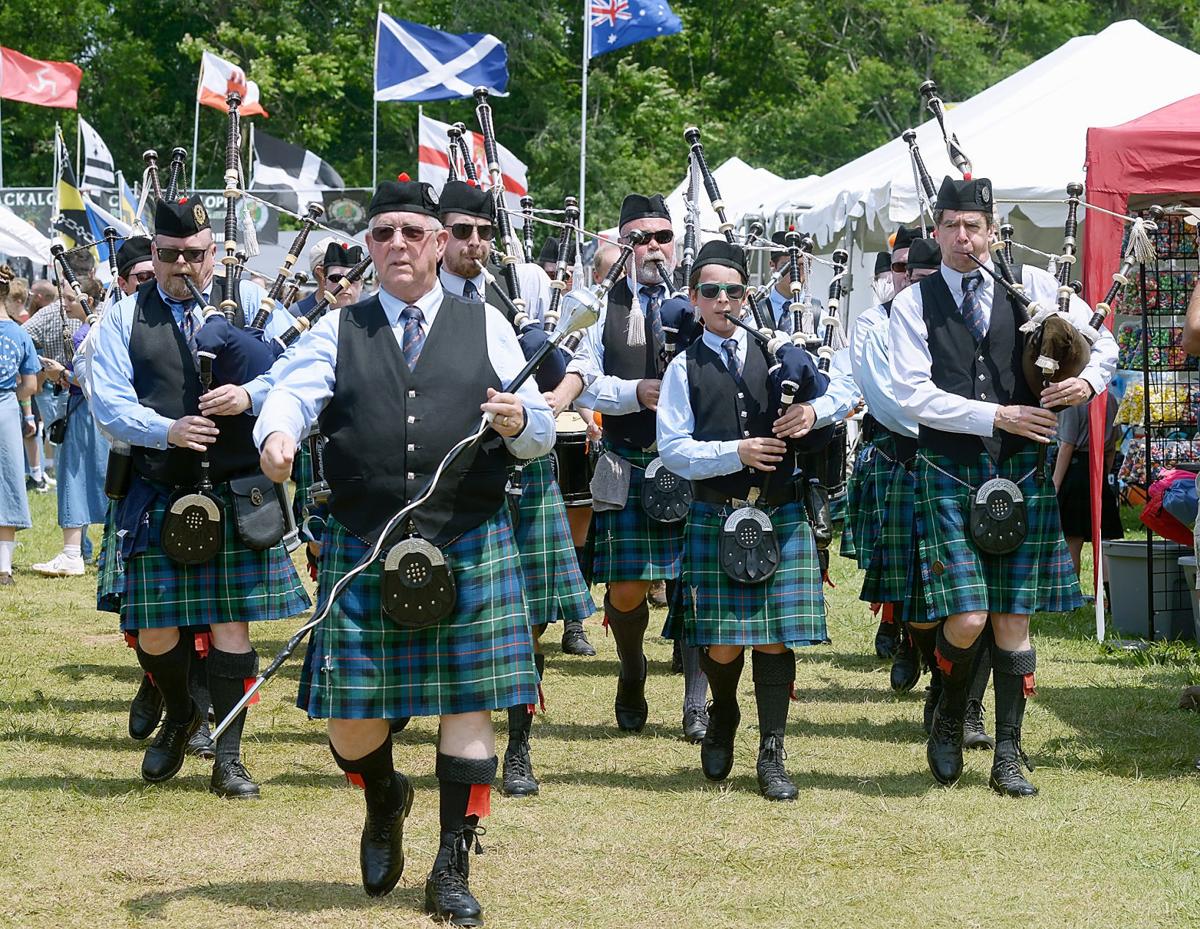 Pipers and drummers parade through the Maryville College grounds of the Smoky Mountain Scottish Festival and Games in 2019. Because of the ongoing coronavirus pandemic, the 2020 festival, originally scheduled for May 16 and 17, has been canceled for this year. 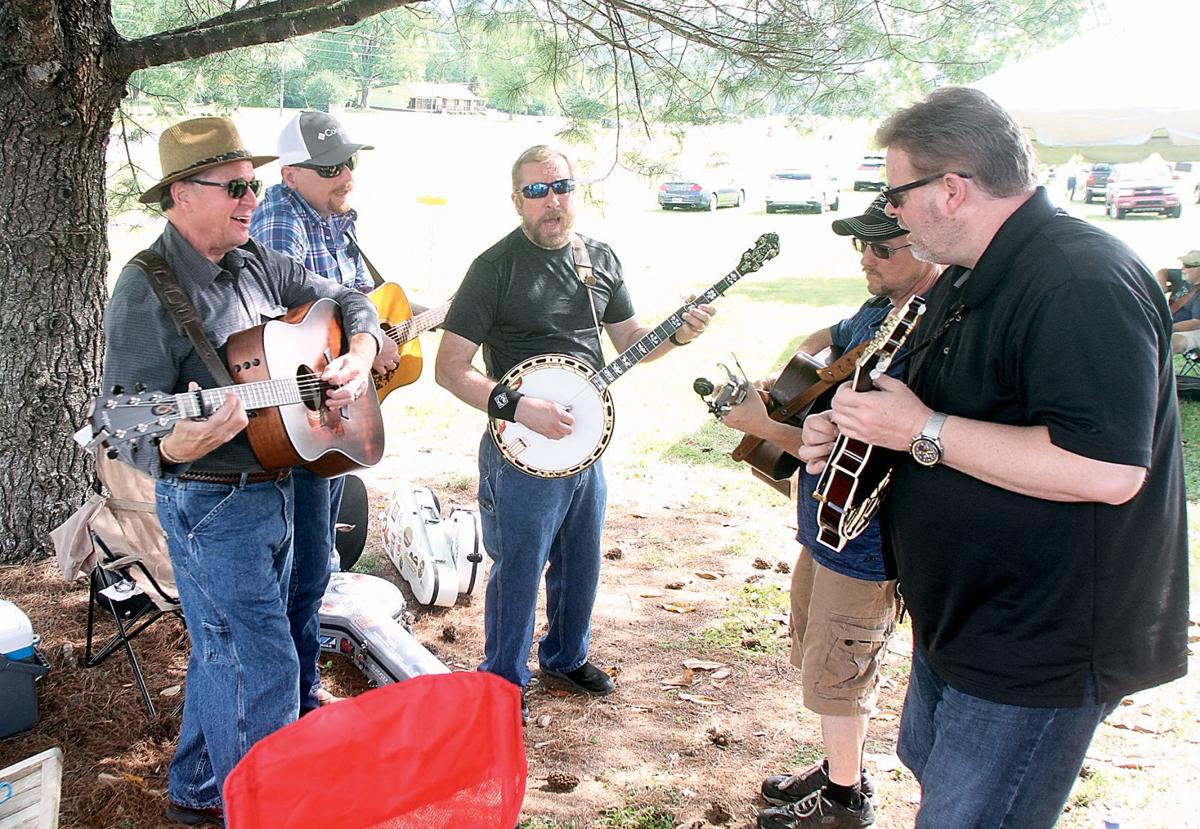 Members of the High Point Quartet — Glenn Hayes (from left), Kyle Tibbetts and Mark Ferguson — play with John Orr and Shawn Drey outside the Townsend Visitors Center at the 2019 Townsend Spring Festival. Because of the ongoing COVID-19 pandemic, this year’s spring festival has been canceled. The event will return for the Fall Festival on Sept. 25 and 26.

Pipers and drummers parade through the Maryville College grounds of the Smoky Mountain Scottish Festival and Games in 2019. Because of the ongoing coronavirus pandemic, the 2020 festival, originally scheduled for May 16 and 17, has been canceled for this year.

Members of the High Point Quartet — Glenn Hayes (from left), Kyle Tibbetts and Mark Ferguson — play with John Orr and Shawn Drey outside the Townsend Visitors Center at the 2019 Townsend Spring Festival. Because of the ongoing COVID-19 pandemic, this year’s spring festival has been canceled. The event will return for the Fall Festival on Sept. 25 and 26.

As the numbers of coronavirus infections in Tennessee climbs, the dates of leisure activities in Blount County continue to topple like dominoes.

Over the past week, officials announced that the Townsend Spring Festival, originally scheduled for May 1-2, and the Smoky Mountain Scottish Festival and Games, which was to have taken place May 16-17 on the Maryville College campus, have been canceled for 2020. The celebration of Appalachian crafts, culture and music will return in autumn with the annual Fall Festival, but the Scottish festival, board President Bill Kilgore told The Daily Times, won’t return until May 15-16, 2021.

“We’re a member of the Association of Scottish Festivals and Games, and that association has 65 to 75 members, and every state has at least one set of Scottish games,” Kilgore said. “Here in Tennessee, we have three — one in West Tennessee, one in Nashville and ours — but then there are other smaller events. Dandridge does a one-day Scottish festival, for example. All of the festivals, in Tennessee and other states, take place throughout the year, and we can’t reschedule without interfering with one of the other events.

“Our thing is the third weekend in May, period. We try real hard to make sure that’s our weekend and make it work, so it would be extremely difficult to postpone. You’ve got to look at how many of our athletes come (from out of town), how many bagpipe bands come and perform, how many dancers come and perform — and most of them are already scheduled to be at these other games. That, along with how we would even find another weekend in Maryville College’s schedule, makes for too many variables to even think about (rescheduling) for this year.”

In the town of Louisville, the inaugural country music festival known as Wolfstock — originally scheduled for May 22 and 23 and featuring headline performances by country stars Justin Moore and Chris Janson — will take place this year, but not until September. Louisville Mayor Tom Bickers told The Daily Times that as federal calls for limitations on public events would extend into May, Wolfstock planners felt the wisest course of action was to delay the event.

“When it became clear that we needed to do the right thing and promote safety and tell people to really pay attention and follow government protocols, we all said, ‘Let’s do what we can and get the same lineup back,’” Bickers said. “We’re delayed, and we’re disappointed, but I’m hoping that this is going to be a time in September when all of this area is going to be ready to put this virus behind us and get out and celebrate life again. And fortunately, everybody scheduled to perform has recommitted and will be there in September.

“Obviously, we were trying to make the wisest decision we could, and the first projects were that we would see the peak of the (infection) curve in mid- to late April, which kind of put us out of the window. Now, they’re pushing that back, and so the right thing to do was to go ahead and get this rescheduled and get our talent recommitted, because the longer we wait, the harder it was going to be to get them back, too.”

Across Blount County, event planners are being forced to reckon with the reality of event planning in the time of COVID-19. Although Wolfstock, the Smoky Mountain Scottish Festival and the Townsend Spring Festival all were scheduled for May, planning for each already was underway, and rather than continue to do so when there’s no clear end to the crisis in sight, it makes for a better use of resources to pull the plug, said Blount Partnership Communications Director Jeff Muir.

“It’s wild times,” said Muir, whose organization is responsible for planning the twice-yearly Townsend celebrations. “It’s tough, because everybody’s going at their own pace and trying to figure it out as it comes along. We began planning for the (Spring Festival) back in January, when we start taking applications for craft and food vendors, and then we go through a jurying process for the craft vendors to make sure they’re all handmade with East Tennessee, Appalachian mountain flavor and flair.

“Then we have to make sure that our facility is set up for the requirements that the food vendors need when it comes to water and power and making sure everybody has WiFi access to take credit card payments. Jay Tipton (the event’s music director) works to fill the music slots, and we have to have time for publicity, so there’s definitely a lot of behind-the-scenes work that goes into these things. It’s not just something that happens. We’ve been doing it for 25 years, so we’re pretty good at it, but it’s still a process you have to go through, and it’s not something you can just throw together.”

Although there have been unexpected mid-event cancellations due to inclement weather — Muir recalls a windstorm that wreaked havoc on the festival grounds a couple of years ago that led to calling off the Saturday portion of the two-day event — there has not, to his recollection, been a time in the quarter-century the festival has taken place that potential peril has necessitated an abrogation in advance. Then again, Bickers pointed out, no matter how thorough area event planners examined potential contingencies, a possible pandemic was never under consideration.

“I spoke to a group at the (Blount County) Chamber (of Commerce) last week, and I said, ‘When we were doing our due diligence and looking at all the potential contingencies, I probably had a dozen or more — but a viral pandemic wasn’t one of them,” he said. “And I don’t think we were alone in that.”

“You plan for the things you know are going to be more likely to crop up — how do we prepare for bad weather, how do we work around road closures,” Muir added. “Sometimes you have rock slides in Townsend that bottle things up for one lane, so you have to plan for that and how to get the word out. But this is a new one.”

And it’s caught nearly everyone by surprise, from festival planners to venue managers to those who book entertainment for bigger venues like The Shed and the Clayton Center for the Arts. Over at the Clayton Center, the remainder of the 2019-20 season has been upended, according to a press release: “The Choir of Man performance scheduled for April 3 has been postponed, and the Center’s management is working to reschedule to a future date. Tickets for the April 3 show will be honored for the re-scheduled show. We will provide additional information once a new date is determined. The Southern Circuit Tour film ‘Little Miss Westie’ scheduled for April 22 has been cancelled. The Box Office Staff will contact all ticket holders for Clayton Center and community events regarding options including refunds or ticket donations.”

The art galleries are dark, and the next show on the books is a June 13 performance by the Americana ensemble The Wailin’ Jennys. Whether that show will go on depends on how long the COVID-19 crisis lasts.

“This was not a decision made easily or lightly, as it has enormous impact on the center, and many others including our various community partners, rental and event clients,” General Manager Blake Smith said in a statement. “However, the safety and well-being of staff, volunteers, performers, patrons and visitors is of paramount importance and is always a significant factor in our decision making process.”

While postponement of certain events is still no guarantee they’ll take place given the unpredictable nature of the current pandemic, Kilgore feels confident that pushing the next Scottish Festival out to 2021, at least, is a safe move.

“We should be good to go — at least, that’s what we’re hoping for,” he said. “The prep work that goes into it is enormous, even from the Maryville College standpoint. They’ve got to keep the field mowed where the festival takes place, but they’ve shut down. They don’t have people there. A lot of things just can’t happen right now, and we felt like canceling was the socially responsible thing for us to do.”

In Louisville, Wolfstock organizers are determined to use the September soiree as a celebration of sorts — with the understanding that all tickets to the original May dates will be honored, or refunded if those who purchased them in advance can’t make it on the new dates. For now, Bickers added, it’s important to heed government protocols in order to limit exposure and shorten the duration of the epidemic.

“As the mayor, I’m telling people that it’s important we just follow the guidelines and protocols, because the more we do that, and the more we sacrifice doing what we may want to do for a short period of time, should mean this passes quicker,” he said. “For us, it just means we’ll have a little more time to make sure we’ve got all the T’s crossed and the I’s dotted. Because come September, everybody’s going to be ready to get out and say, ‘Let’s go celebrate and enjoy some good music and enjoy community again.’”

COME ONE, COME ALL!