Carmen McClain (left) and Jasmine Martinez sit on the newly painted bridge on Farraday Street in Alcoa after painting the bridge a second time in two days with the help and support of friends. They painted the bridge first on Tuesday night when they were confronted by a woman who berated them for their art.

Abi (left) and Becky Lucas helped out at Wednesday’s bridge painting. Among other things, they took passed out bottled water to make sure everyone stayed hydrated.

Jasmine Martinez (left) and Carmen McClain take a break from painting for a few photos as friends continue the work through a brief rain shower Wednesday.

Supporters turned out for Wednesday's painting of the bridge on Farraday Street and remained there through a brief rain shower.

Jacob Tatham (right) sprays purple paint on Carmen McClain’s hands so she can add hand prints to the sidewalk on the Farraday Street bridge.

Jacob Tatham makes hand prints on the sidewalk at the Farraday Street bridge. Hand prints of all the colors of the rainbow were made at the pride event.

By 6 p.m., less than five hours after being painted, the bridge painting was partially obscured by a drive by painter with silver paint. The bridge on Farraday Street in Alcoa has been the scene of graffiti for many years.

Video taken Tuesday night shows a woman berating two local high school students, swearing at them, using alleged homophobic and xenophobic language and condemning them for painting LGBTQ+ flags on a popular Alcoa bridge where graffiti is allowed at the intersection of Vose Road and Darwin and Faraday streets.

“She had driven by and told us to stop and told us that we were doing terrible things to the bridge,” Martinez said.

The woman then returned on foot, Martinez said, at which point Martinez began recording the incident on her cellphone.

In that recording — later posted to Facebook, Instagram and TikTok and now shared on national news — the woman told the teens she was “coming over here to paint over yours,” and proceeded to spray white paint over the flags, much to Martinez and McClain’s protests.

In the video, the woman also said “Y’all aren’t even different anymore. Y’all are trying to stand out. I could give less about what you want and what you think you might want to be. ... You’re not going to do it. You don’t pay taxes. You’re probably an immigrant here.”

Martinez said her family is Hispanic and McClain said she is Italian and Native American.

In another video documenting the confrontation, the woman said “Do ya’ll like each other? Are you confused?”

Martinez and McClain said they are girlfriends who recently came out as gay to their families and were painting LGBTQ+ flags because it was Pride Month.

In yet another video, the woman can be heard saying “I’m going to put an American flag here because that’s what we stand for,” while spraying white paint. Martinez points out she had the wrong colors and the woman then scolds her for being “disrespectful.”

Martinez and McClain said the woman was not the only one to speak out against the painting Tuesday, but said others also honked in support.

Eventually, when the woman said she would call the police, Martinez said they decided to “cut our losses” and left. They said they were afraid the woman would lie and the police would “take her side.”

Alcoa Police Chief David Carswell said no reports had been filed regarding the incident.

That night, both students said they were troubled and “bummed out” by the event.

“It made me feel so devastated that in our community people act like that,” McClain said. “We were just trying to spread positivity with those flags we painted.”

She added the reason they decided to paint the bridge was to support fellow students.

“It’s near school, so seeing kids drive by and see that, if they come from a not-so-supportive home, they can see (the painting) and see that they are loved and that there are people like them out there.”

Wednesday, Martinez and McClain returned to repaint the bridge, this time accompanied by a crowd of supporters who stood in the rain as high schoolers painted new depictions of the eight-color inclusive Pride, transgender, bisexual and pansexual flags.

As students and others painted, local educators, parents, church members and other supporters stood by.

One of them was Roman Lay, an Alcoa High School English and drama teacher who said some of his students were painting Wednesday. He spoke as an individual and not as a school representative when he said he believed the Tuesday incident was “indicative of a larger problem.”

He said he was there to love and support the kids.

Maryville College Education professor Becky Lucas also was present. She is involved in local LGBTQ+ activism, including starting the local chapter of Parents, Families, and Friends of Lesbians and Gays (PFLAG).

“I’m here to support my kids and my community,” she said, noting she has two LGBTQ+ children. “They have the courage to be who they are in a society where adults that are supposed to protect them ... have not done that, historically.”

She later added by phone that research shows when teachers and parents, legislators, members of the faith community and other “respected adults support our diverse youth, students like Carmen and Jasmine, that their school performance, attendance and mental health improves.”

The woman in the nationally shared video was not identified, though many on social media are claiming it was someone who worked at Blount Memorial Hospital Wellness Center.

The Daily Times asked Blount Memorial Hospital if this was true.

“Blount Memorial does not comment on requests to confirm employment status,” Hospital spokeswoman Jennie Bounds responded. “We have received numerous communications about an incident that occurred in one of our communities. While we can’t speak to the incident or the individuals allegedly involved, these actions do not reflect the opinions of Blount Memorial.”

The Daily Times attempted to contact the individual mentioned on social media but did not receive any responses by presstime.

Though the bridge was repainted by 2:30 p.m. Wednesday, witnesses at the bridge said around 6 p.m. that people had come by and painted through the words “love is love” with silver paint.

Carswell around 3 p.m. said the event had been peaceful. He confirmed it is not illegal to paint the bridge, providing the art was not “vulgar.”

Video of the incident is attached to the web version of this article at thedailytimes.com.

VIEWER DISCRETION ADVISED: The videos of this incident contain profanities and other offensive terms.

VIEWER DISCRETION ADVISED: The videos of this incident contain profanities and other offensive terms. 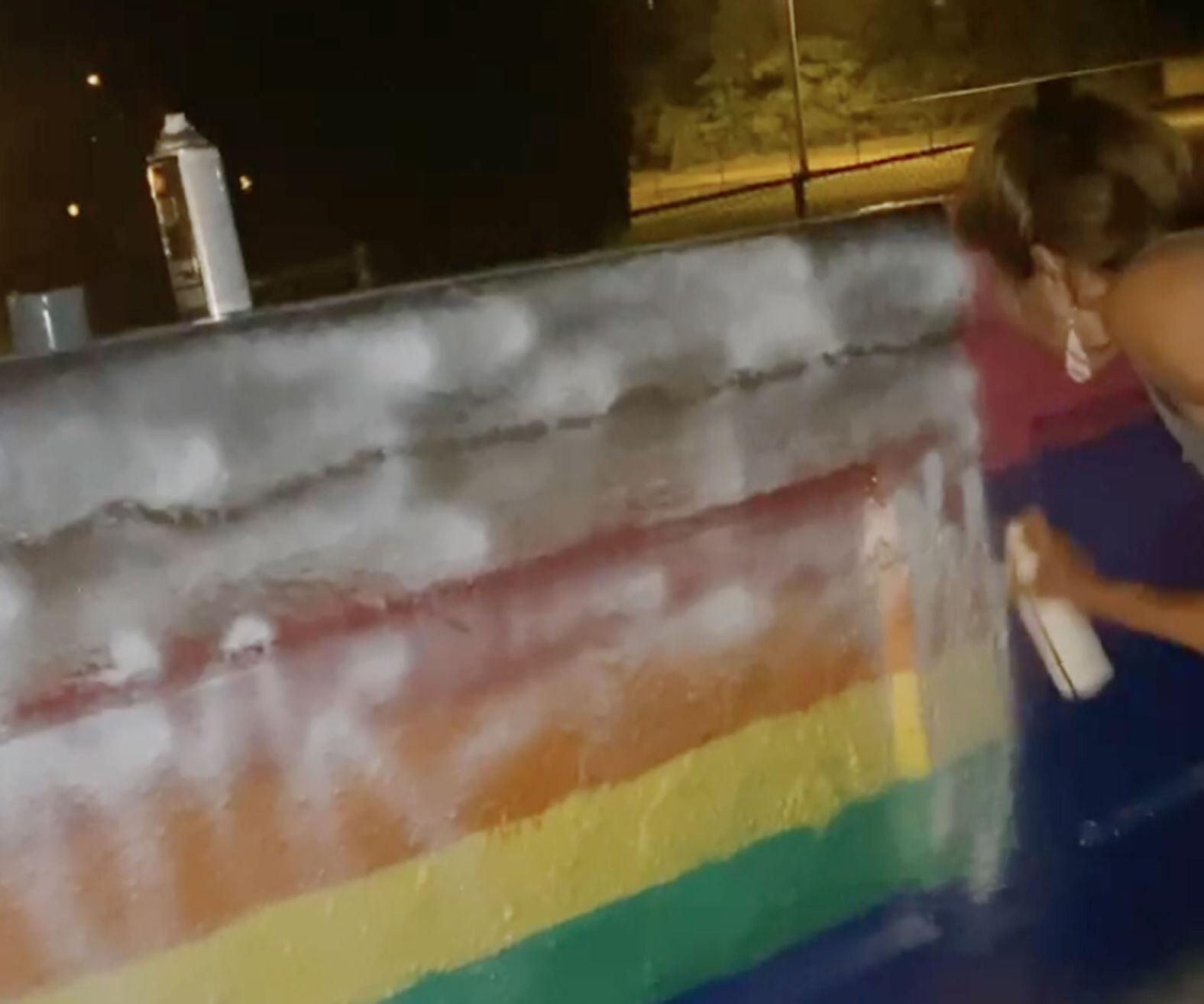 A woman paints over a pride symbol on a popular Alcoa bridge June 8 night in this screenshot from a video recording made by witnesses.

A Maryville man was booked into the Blount County jail on Tuesday after he allegedly raped a woman.

Silver bonded out the same day he was arrested, according to BCSO Public Information Officer Marian O’Briant.

The victim was an acquaintance of Silver’s and met him at a dog park, Maryville Police Chief Tony Crisp told The Daily Times.

“They knew each other, obviously, and they had a conversation,” Crisp said.

The woman went with Silver to his residence, she fell asleep during the night and Silver allegedly raped her, Crisp said.

The woman reported the alleged rape, and police began investigating it, Crisp said.

The Maryville Police Department obtained a warrant for Silver’s arrest, and BCSO served the warrant.

BSCO arrested Antonio Javar Williams, 35, of York, South Carolina, on May 2 and charged him with rape after a woman said he climbed into bed with her at a Tallassee address and they began to have sex, but she thought he was her fiancé, an incident report states.

BCSO arrested Dustin Leon Hawkins, 36, Brick Mill Road, Maryville, on Dec. 29 and charged him with two counts of statutory rape by an authority figure and two counts of incest after a 14-year-old girl said he sexually assaulted her multiple times, an incident report states.

Site plans for a Publix store in the Foothills Mall footprint have been submitted to Maryville’s planning department for review, indicating the long-awaited grocery outlet may actually happen, even after nearly a year of legal wrangling.

Though the site plans do not blatantly say “Publix” on them, they do show a grocery store planned for Foothills Mall, part of it where the former Sears building stands today.

That’s exactly where Knoxville-based developer CHM proposed it would build a Publix in 2020.

CHM — specifically CHM Foothills 7 — is still the company proposed to develop the store and is listed on the first page of the site plans.

“(CHM) is putting itself in a position so that if and when everything is finalized we will be able to move quickly,” firm principal Jim Harrison said through a spokesman June 9 when asked about the site plans.

“We look forward to bringing our premier customer service and quality to Maryville and are delighted to soon be a neighbor in this wonderful community,” Glover emailed.

City of Maryville planning officials did not want to comment on the site plan’s connection to Publix, if any.

“There is no name associated with the grocery store,” Public Works Director Angie Luckie emailed June 9.

Neither CHM nor Publix are listed on the June 21 agenda for the Maryville Municipal Planning Commission meeting.

Since July 2020, when CHM announced it would build near the east end of Foothills Mall, the developer and Publix became involved in a lawsuit that stopped the project in its tracks, with mall landowners Brooklyn, New York-based Time Equities and others accusing CHM of essentially jumping the gun.

Then and in documents since the suit was first filed in August 2020, CHM, Publix and Time Equities’ legal representation have exchanged disagreements in the Blount County Circuit Court.

These included but were not limited to disputes over whether or not legal documents allowed CHM to tear down the old Sears building to make way for the new Publix.

However, individuals close to the project say those parties may be nearing an agreement.

The recently submitted site plans show a 48,387-square-foot grocery store separated by a small lot from the main mall building.

They also show new parking lots and trees going in the acreage surrounding the proposed building.

It would be just north of the roundabout on Mall Road.