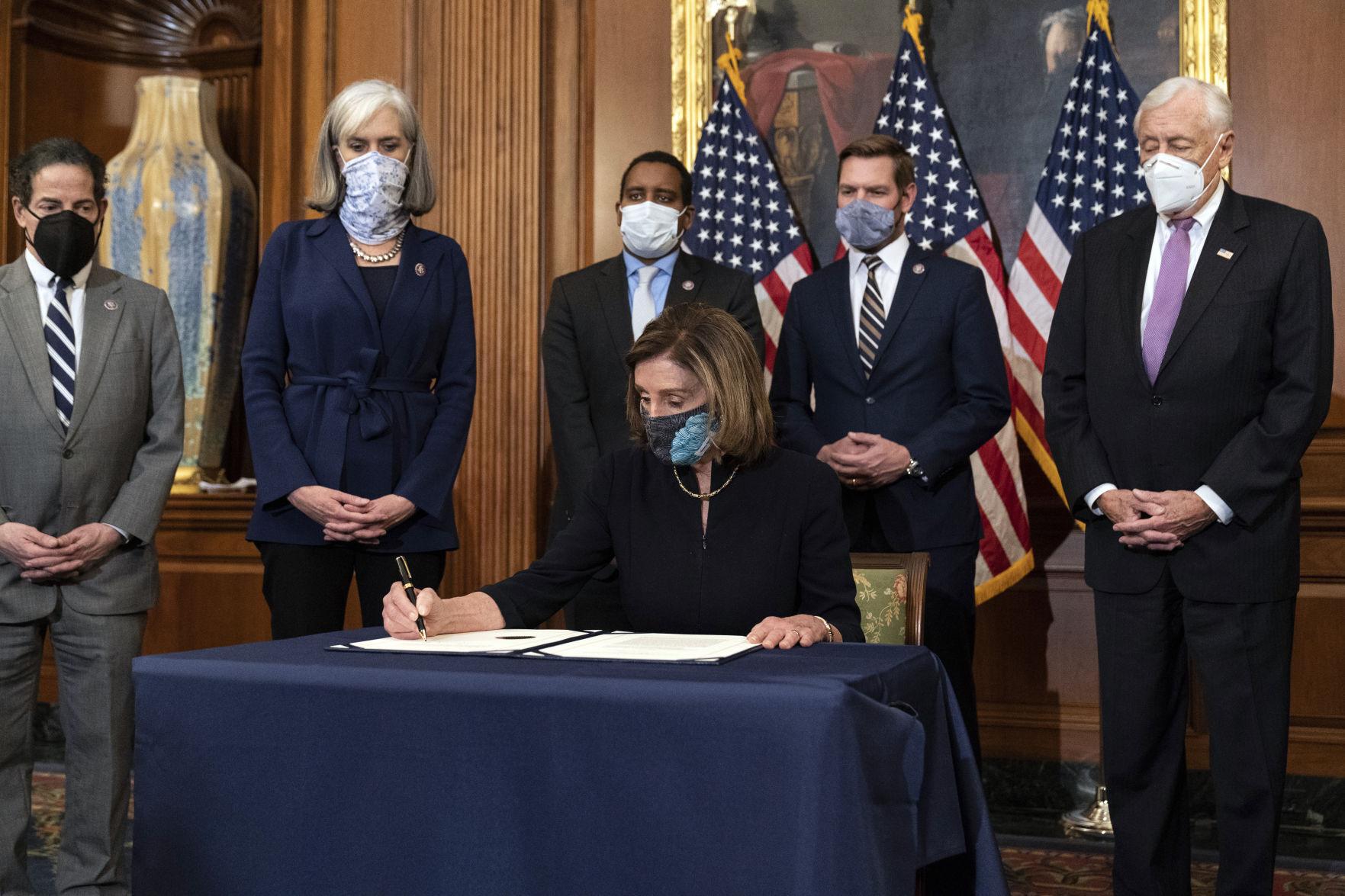 House Speaker Nancy Pelosi of California, signs the article of impeachment on Wednesday against President Donald Trump in an engrossment ceremony before transmission to the Senate for trial on Capitol Hill in Washington.

Holly Thompson, now a News4 Nashville anchor, knew when she was a student at William Blount High School that she wanted a career in broadcasting. In a video posted by Blount County Schools as part of its alumni recognition this month, she talks about the school experiences that shaped her life.

Aaron Clark and Jeff Clark discuss their Blount County Schools experiences in a video honoring them and promoting the school district. Aaron is co-owner of Blount Discount Pharmacy, and Jeff is a deputy chief in the Blount County Sheriff’s Office.

A 2002 graduate of Heritage High School, Principal Jed West has been honored by the school district as part of a new quarterly alumni recognition.

“We want our kids and our community to know we have good things going on in Blount County,” said Mike Brewer, BCS special education coordinator.

The school district is honoring the alumni through quarterly presentations at its school board meetings and short videos posted to social media.

In the videos, the honorees talk about their Blount County Schools experiences and offer to current students such advice as working hard, following their passions and building positive relationships.

At January’s Board of Education meeting, the honorees were Holly Thompson, co-anchor on News4 in Nashville and graduate of William Blount High School; and from Heritage High School, brothers Aaron Clark, co-owner of Blount Discount Pharmacy, and Jeff Clark, deputy chief of patrol and public safety with the Blount County Sheriff’s Office.

Thompson, who was a WBHS valedictorian in 1990, has been with the NBC affiliate for 23 years, earning nine Emmys and multiple Associated Press awards.

Jeff Clark, a 1988 graduate, and Aaron, a 1991 graduate, spoke in their video not only about their own experiences but also classmates who have gone on to become lawyers, judges, doctors, authors, accountants and actors.

BCS in November recognized U.S. Air Force Capt. Ben Farr, from the WBHS Class of 2006, when he was in the band program and Junior ROTC. He studied engineering at the University of Tennessee, earned a master’s degree and served as drum major of the Pride of the Southland Band for two years before being commissioned in the Air Force and learning to pilot the KC-135 Stratotanker.

In his video, Farr explained that he has flown thousands of hours across the globe in support of the United States and its allies, and he now trains pilots at a base in Oklahoma.

“We want our kids to see and hear we have wonderful, successful graduates doing successful things throughout the world,” Brewer said.

From HHS, the district honored 2002 graduate Jed West, who became principal of his alma mater this school year. In his video, West named several educators and coaches who had an impact on him, including then-coach Robbie Bennett, now a member of West’s staff as athletic director at the high school.

Whether the honoree is able to attend the meeting or not, the district shows the video, which sometimes BCS students have helped create.

The district also donates $100 in the person’s name to the Blount County school he or she chooses.

Utility work continues at the intersection of East Harper Avenue and North Cusick Street on Tuesday afternoon, where Atmos Energy-contracted crews are replacing a gas main.

An Atmos Energy project to replace a gas main in downtown Maryville may see work extend through April, according to company representatives. City-contracted crews also may be repaving the intersection of East Harper Avenue and North Cusick Street come summer.

Gas-line replacement in downtown Maryville will see crews ripping up East and West Harper Avenue through early spring, according to a city official and Dallas-based Atmos Energy representatives.

Work that started at the end of November 2020 won’t wrap until some time in April, according to Atmos Maryville Operations Supervisor Travis Greenwood.

The project runs along East and West Harper Avenue from Cates Street to Everett Avenue.

Though Greenwood characterized the project as “single phase,” work on various sections will see Maryville-contracted crews following close behind with repaving efforts.

“The good thing about this is, you know, it’s a mess, but we’ve been planning on resurfacing all of Harper Avenue ... basically down from Everett Avenue to Cates Street,” City Engineer Kevin Stoltenberg told The Daily Times by phone Wednesday. “We wanted them to do this work beforehand.”

Stoltenberg explained that once Atmos-contracted crews finish tearing trenches in the road and installing new line, city crews will follow behind to install things like sidewalks ramps.

“Then, hopefully this summer, we’re going to come in and have a contractor mill and repave the asphalt roadway,” he added. “So it will be a whole new driving surface.

Atmos corporate representative Kay Coomes emailed Wednesday that safety is the company’s top priority. “We consider the safety and reliability of our system as paramount to our customers and the communities we serve,” she wrote.

She also thanked the city for its “patience” and said though the company doesn’t currently expect it will have to close any roads between January and April, it “will work with local officials should something change as the project progresses.”

The gas main project follows on the heels of major repaving efforts at the intersection of Harper Avenue and North Cusick Street in late 2020, when traffic was redirected for weeks.