Log In Register
You have permission to edit this page.
Edit

Community members urging elected officials to ensure Lanier Elementary remains open used cups to create the eagle mascot and spell out "Lanier Matters" on the fence Wednesday, May 27. A rally is planned across from the school Saturday morning, May 30.

Shirts were sold until midnight May 28, for a rally across from Lanier Elementary on May 30.

Over the past 100 years, many small schools were merged into Lanier, and now community members are rallying against a suggestion that Blount County close their school.

Remarks by Blount County Mayor Ed Mitchell during a May 14 budget meeting led to a grassroots effort to show “Lanier Matters.”

Jen Robasser started a Facebook page with that name the evening of May 22, and within five days it had more than 1,600 members — not only parents of current students and alumni but also people from across Blount County and neighboring areas who support community schools.

Cristal Mizell posted a petition on Change.org to ensure funding to replace the school’s sewer plant; it has received more than 2,600 signatures.

And Saturday, May 30, the community is planning a pep rally in a field across from the school. Organizer Angie Valpatic said, “We really want it to be civil, positive and upbeat.”

Of numerous elected officials invited, only one had confirmed by Wednesday, May 27, that he planned to attend: school board member Jim Compton.

The county Budget Committee this month objected to plans by the Blount County Board of Education to use about $3.1 million in previously undesignated funds to shore up the 2020-21 budget, which included a plan to spend $877,5000 to replace the sewer system at Lanier Elementary.

At that meeting, Mitchell said, “When we talk about putting millions and millions of dollars into buildings that have less than 60% occupancy, I think we have an opportunity here, during this time, to take that money and reinvest it in the kids and the teachers instead of in bricks and mortar and failing sewer systems and things such as that.”

Last week on Facebook, a lengthy post on the Blount County Mayor’s page noted efforts to improve the financial health of the county and described the action taken at the committee meeting.

He also wrote, “I encourage everyone to get involved in your government by attending school board meetings, filling school board positions, and attending other government meetings. Social media provides a means of sharing your opinion, but it is in no way a replacement for becoming an active participant in the way your tax dollars are being spent on education and throughout the rest of your County, all year long.”

The possibility of closing one or more of the 21 Blount County Schools facilities didn’t originate after the coronavirus pandemic hit the economy.

Blount County Commission members serving on its Education Committee asked for building capacity and enrollment figures more than a year ago. School board member Robbie Kirkland also has raised the issue at several meetings this year.

In a November 2019 meeting of the Education Committee, BCS Director Rob Britt presented the figures showing five of the schools had enrollments below 60% of their capacity, including Lanier.

When questioned about adjusting attendance zones, Britt said the district would want to give families plenty of notice about any such change and the earliest something like that might happen would be the 2021-22 school year.

When Kirkland raised the idea of closing Lanier during a May 4 school board meeting, Britt noted that would be an extreme logistical challenge, particularly given the uncertainties raised by the pandemic and the fact schools are scheduled to resume in late July.

On May 22 the BCS Facebook page said, in part, “Our leadership committee is reviewing options related to continuing to serve students and families using the Lanier school building in the fall of 2020.”

The school board is scheduled to discuss the budget again during a work session Thursday, June 4.

Replacing the Lanier sewer was among the BCS budget priorities in the current fiscal year for Fund 177, a portion of county property tax revenues that aren’t split with the two city school districts and that must be spent on capital projects.

However, the cost of replacing the roof on the career and technical education building at William Blount High School was about $341,000 more than anticipated, according to Troy Logan, the school district’s fiscal administrator.

Logan said he met several times with officials from the Tennessee Department of Environment and Conservation and others to figure out an option for the Lanier sewer plant, which school officials have described as on its last legs. “We’ve successfully gotten through this school year without it dying,” Logan said.

“I did not have enough money in 177 even if I could get the project going,” Logan said of the current fiscal year.

“We continue to work on it, and our intent is to fix that sewer,” he said. “That’s why we put it in the budget again for next year.”

Priorities for Fund 177 in the 2020-21 budget include finishing heating, ventilation and air-conditioning work at WBHS and renovating its science labs, as well as some HVAC work at Heritage High School and/or installing a fire suppression system, which the school does not have because it was built before that requirement.

Fund 177 is expected to provide about $5.4 million, and $3.9 million must be used for high school renovations. But Logan explained that he can’t budget partial projects to stay within that amount. “It’s impossible to take $4 million and make projects fit exactly,” he said.

“I’m trying to get big things done with the monies we’ve got,” he said. “I can’t do William Blount science labs and just do three of them. You can’t do pieces of things.”

He also noted that needs may shift during the budget year, such as if an HVAC repair or replacement is needed at another school.

“We’re exploring all other options,” Logan said of funding the sewer work at Lanier. School board Chair Debbie Sudhoff has raised the possibility of applying for a grant that could provide half the money, but even if BCS receives it, that grant likely wouldn’t be awarded until January.

Jen Robasser said seeing the mayor’s Facebook page “lit a fire in me,” leading her to create the Lanier Matters page.

Her son just completed fifth grade at Lanier, and her other children will be entering first and third grade in the next school year.

“It’s literally like a big family,” she said of the elementary school and staff. “It’s not just a job to them. They go above and beyond.”

Talking with her rising third grader, Robasser used the “DNA” format the school has used with students. Her daughter’s “Dream” was “that my school stay open.”

When she asked about the girl’s “Needs,” she replied, “I need my friends with me.”

When the mom asked about her “Abilities,” the child said, “I’m going to make clay figures and I’m going to sell them to get that septic system.”

The first Blount County school named Lanier opened in 1922, replacing two log schools. Over the years at least 10 other schools were merged into Lanier, which is now housed in a building constructed in 1968 and serves about 300 students.

What: Pep rally to show support for Lanier Elementary School

More information: Under the Lanier Matters page on Facebook. T-shirts and other items for the rally are being sold online at https://laniermatters.itemorder.com. 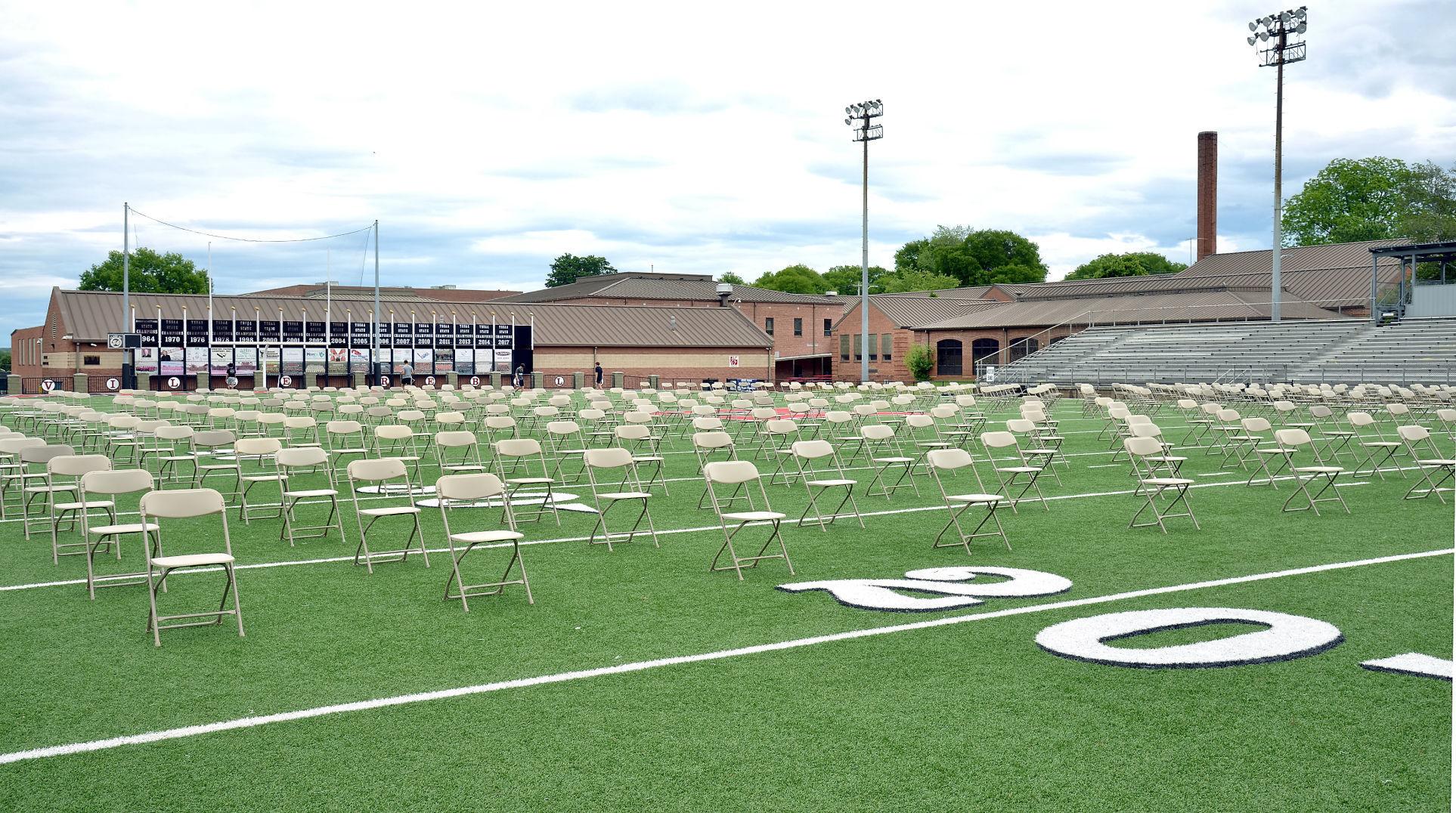 Maryville High School is preparing for the graduation ceremony for the Class of 2020 to be held at 7:30 p.m. Friday, on the school’s football field. Currently 360 seniors are signed up to participate in the ceremony. Each student will be given four tickets for family members, while additional family and friends will be able to watch the ceremony streamed online.

Most of the complaints, according to state health department Assistant Planning Coordinator Corie Gouge, have been about improper use of personal protective equipment.

According to the guidelines, employees are advised to wear face masks, and restaurants are required to place booths, tables or counter seats 6 feet apart. All employees and customers also are encouraged to be screened, the TN Pledge Restaurant Guidelines state.

But some businesses haven’t been abiding by these rules, Gouge said, and of those who do, some aren’t covering their noses with their masks.

“Environmental staff have had numerous calls mostly about improper use of PPE,” she said. “They are currently consulting with restaurant owners and managers to encourage compliance with the governor’s recommendations for preventing and mitigating further spread of COVID-19.”

After receiving a complaint, health department staff members conduct consultation visits. These visits, Gouge said, are not scored but serve only to assist businesses with reopening safely.

“We ensure they have the information on the guidelines, consult with them and encourage their compliance,” she said.

While health departments do not have the authority to force businesses to comply with the recommendations, environmental health staff members still are encouraged to report businesses that show no intention of complying with the governor’s guidelines.

Gouge said the visits from health department workers in addition to Lee’s statements about the virus could be enough to keep people complying with the guidelines.

“We believe this is in alignment with Gov. Lee’s statement that the guidance will be self-enforced,” she said. “Employers have the right and the responsibility to ensure compliance with the recommendations.”

Gouge added that restaurants are not the only businesses required to adhere to the governor’s recommendation.

“It is important to note that restaurants are just one type of employer, and all businesses and employers are included in the general reopening guidance,” she said. “It is also important to note COVID-19 is not spread through food.”

Nearly all services and events in the state have been given the go-ahead to reopen.

On May 5, Lee signed Executive Order 33, which allowed close-contact service providers such as barbershops and salons to reopen.

Retail establishments and places of worship also have been given the green light to open while adhering to guidelines.

The latest executive order, signed May 22, encouraged Tennesseans to wear face masks when in public, limit activity, not gather in groups of more than 50 people and maintain a distance of 6 feet from other people.