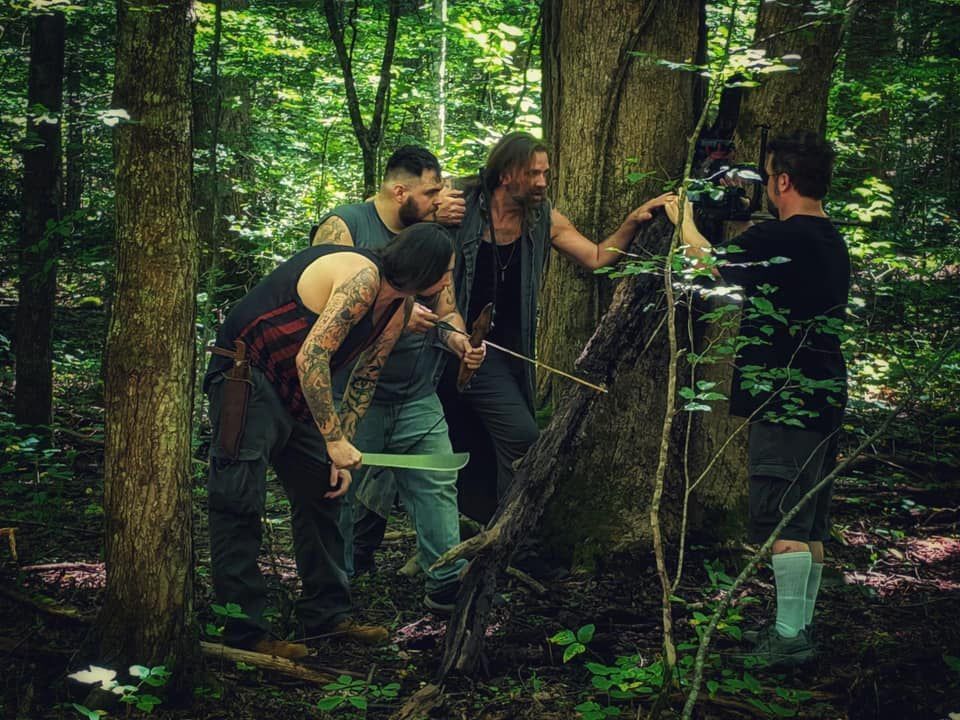 Vinnie “Funkmaster V” Vineyard (right) films “The Strangers” for a scene in “The Hike.” 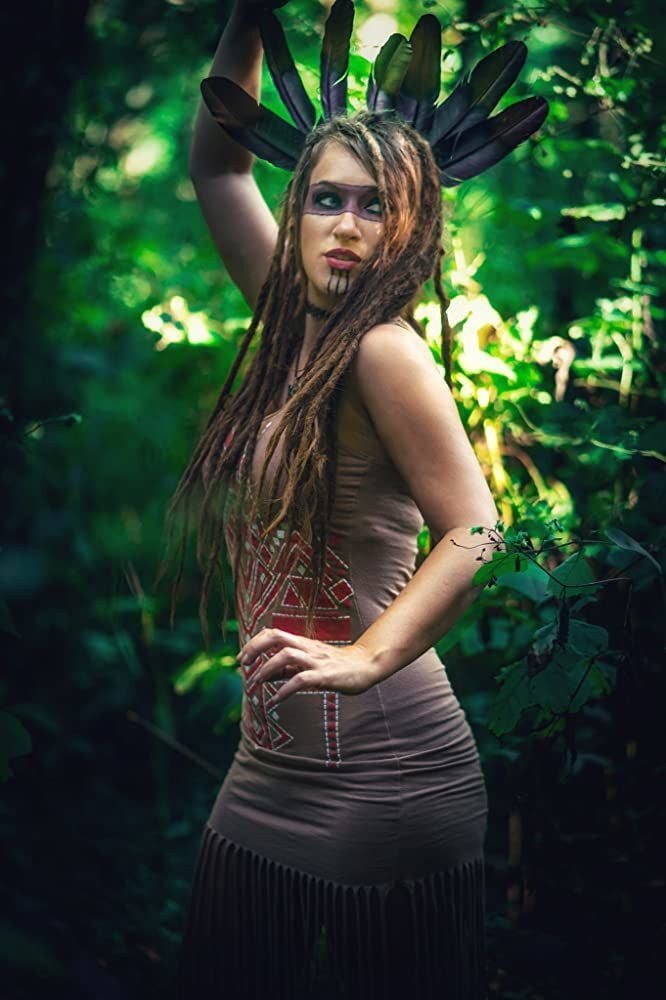 Kandi Thompson stars in “The Hike.”

Vinnie Vineyard (left) and Kandi Thompson go over the script during filming of “The Hike.”

Vinnie “Funkmaster V” Vineyard (right) films “The Strangers” for a scene in “The Hike.”

Kandi Thompson stars in “The Hike.”

Vinnie Vineyard (left) and Kandi Thompson go over the script during filming of “The Hike.”

So the dude known as “Funkmaster V” is a movie star now, after playing in local bands as a musician, getting in the ring as a professional wrestler, running for governor as a Libertarian candidate and establishing a Sevier County-based cab company that, among other things ferried Gatlinburg residents to safety on the night the city almost burned … well, what else was there left to do?

Vinnie Vineyard, a.k.a. “Funkmaster V,” and his partner, “Big” Luke Walker — through their production company, Big N Funky Productions — is one of the stars of “The Hike,” an independent horror thriller that gets its big screen debut on Friday night at Halls Cinema 7 in Knoxville, and like most things the entrepreneur and his crew do, it’s a public event with a twist.

“We shot multiple endings, so the people who go on Friday will get to decide which ending is better — one or two,” Vineyard told The Daily Times recently. “The audience gets to choose which one wins that night, and that’s the one we’ll go with. That’s the version we’ll give to the distributor. So in a way, the audience has a chance to help make movie history.”

If it sounds grandiose, that’s only because Vineyard has always thought big and lived large. He graduated in 1993 from Gibbs High School, and his first experiences performing in front of an audience were at church. He and a friend from Blount County, Maryville High School graduate Brian Smith, started the Christian band Big Fish, but while his peers channeled the John Denver gentility of the acoustic guitar, Vineyard found himself drawn to the bass. Big Fish went through a number of incarnations over the years, from Big Fish to Big Fish Funk Revival to Flipside Runner to Pimpin’ Ain’t Easy and back to Flipside Runner.

The genres changed, and the band — regardless of the name — found success as a high-energy cover band that thrived on audience participation, slick dancing, on-stage comedy and more. Vineyard eventually grew bored, however, and turned to his childhood love of professional wrestling, where he and Walker formed a dynamic duo and the found that their chemistry in the ring extended beyond it as well.

“Big N Funky Productions is this kind of ever-changing production company that has been around since 2015, and it was kind of born out of making a really bad wrestling show for Fox television,” Vineyard said. “We got fired after six months because everybody hated it, but we loved it and had fun, so me and Big Luke started making wrestling promos. We would do these ‘Game of Thrones’-style wrestling promos, or promos where we pretended we were buying a business, and eventually that led to these elaborate little movies or four-minute dance montages or whatever.

“And that led to our paranormal TV show, ‘Wrestling With Ghosts,’ which we star in, produce and do everything else in. That got picked up by ASY TV (an independent streaming television network), and eventually we started doing two other ghost shows, a comedy show, commercials for people, music videos … we just kept rocking and rolling.”

The company was basically a learn-as-they-go process for Vineyard and Walker, who brought in friends from the music, wrestling and paranormal communities to contribute in various ways. They bought better equipment, got better at their craft and even signed to a Netflix development deal last December. The more they got involved in the nurturing of a potential Netflix project, the more they understood just what an opportunity they had to be the captains of their own ship. After Vineyard sounded off on social media about President Trump in June, however, he and Walker lost their development partner, and the Netflix deal, he said, seems dead.

No matter. “Funkmaster V” is not a man to be kept down or kept silent — although he only garnered little more than 1,000 votes in his 2018 run for governor on the Libertarian ticket, he made a lot of connections, some of whom have come in handy as they pivoted from a professional development to a do-it-yourself one.

“What we found out from that deal was that 85% of all production in Hollywood and the entertainment industry was shut down because of COVID-19,” he said. “At the time, Luke and I were sitting on this idea of making a movie together, but what kept us back for a long time was uncertainty. This seemed like the green light, because I’ve always been a day late and a dollar short.

“I was in a great rock ‘n’ roll band when rock ‘n’ roll died. I got into pro wrestling after I got too old, and then we got into television, started signing contracts and getting breaks, and then that died. This feels like the first time we were ahead of the curve. We were on the inside enough to realize that nothing was being produced in Hollywood, so we were like, ‘Let’s make a movie and see what we can do.’”

And so “The Hike” came to fruition. It is, in a sense, an homage to the original “Evil Dead” in terms of development and panache. Even though the story is different, it’s a runaway train full of storylines, creepy characters, humor, action and a whole lot more, Vineyard said.

“It was pretty wild, combining all of these stories together into this kind of Big N Funky type of horror movie,” he said. “It’s part horror, part comedy, part romantic comedy, part action — we’ve got the longest 7-minute, four-person fight scene in history. It’s got suspense, paranormal stuff and creepy type of stuff, too, so it’s also kind of a psychological thriller.

“I’m worried we’re going to have a problem like a Kevin Smith movie, where it’s too sweet, too gross, too funny and too creepy. I don’t know what the market is, but I can tell you, the last 15 minutes of this movie are nail-biting. I’ve watched it several times, and I’m still pretty impressed by how it turned out.”

The plot has tendrils in six different real-life stories, Vineyard added, including one experienced by his brother who went hiking in the Great Smoky Mountains, found Polaroids of half-naked individuals scattered along the trail, ran afoul of “these nefarious-looking ‘Deliverance’ dudes who talked like they were from a Tarantino movie” at an overnight shelter and wound up fleeing through the darkness in order to get away. Another storyline is lifted from a “Wrestling With Ghosts” episode in which the guys were on a North Carolina trail seeking Spearfinger, a Cherokee legend that beckons travelers to their deaths and has an obsidian claw on one digit.

It’s been a low-budget affair, to be sure, but the Big N Funky crew, Vineyard said, are wizards at making magic on a shoestring budget.

“You’ve got to use a lot of imagination, because none of us are CGI wizards, but the one thing we do have is that everybody in our group is someone who makes television shows, who are funny, who can fight on screen because they’re pro wrestlers, or who is a musician, so we can score it,” Vineyard said. “Travis (Graves) is a professional axe thrower and professional archer, so we use those things in the movie. Everybody who has a unique attribute, we use them, because it’s really a community. It’s been a family gathering, and we’ve reached out to everyone, from the drag queen community for costumes to a bunch of furries out of Virginia for a scene.”

“This movie is also the story of Big N Funky in a way. People helped out from the era of when I was doing Pimpin’ Ain’t Easy and Flipside … people helped out from ghost hunting, from my political run … we’ve just amassed a unique group of talented people over the years who are great to work with and really good at what they do. It’s a motley crew for sure, a real cavalcade of weirdos.”

And, as it turns out, “The Hike” may not be a one-and-done production. Walker and Vineyard will be shopping the film around to various film festivals and drive-in theaters next year, hoping to place it on a streaming service or through a video-on-demand outlet, but their new distribution partner, Vineyard said, is interested in additional Big N Funky works.

“He’s wanting us to make four or five movies for him a year,” Vineyard said. “He likes the group that we’ve got, because we’ve got great energy and some really good talent.”