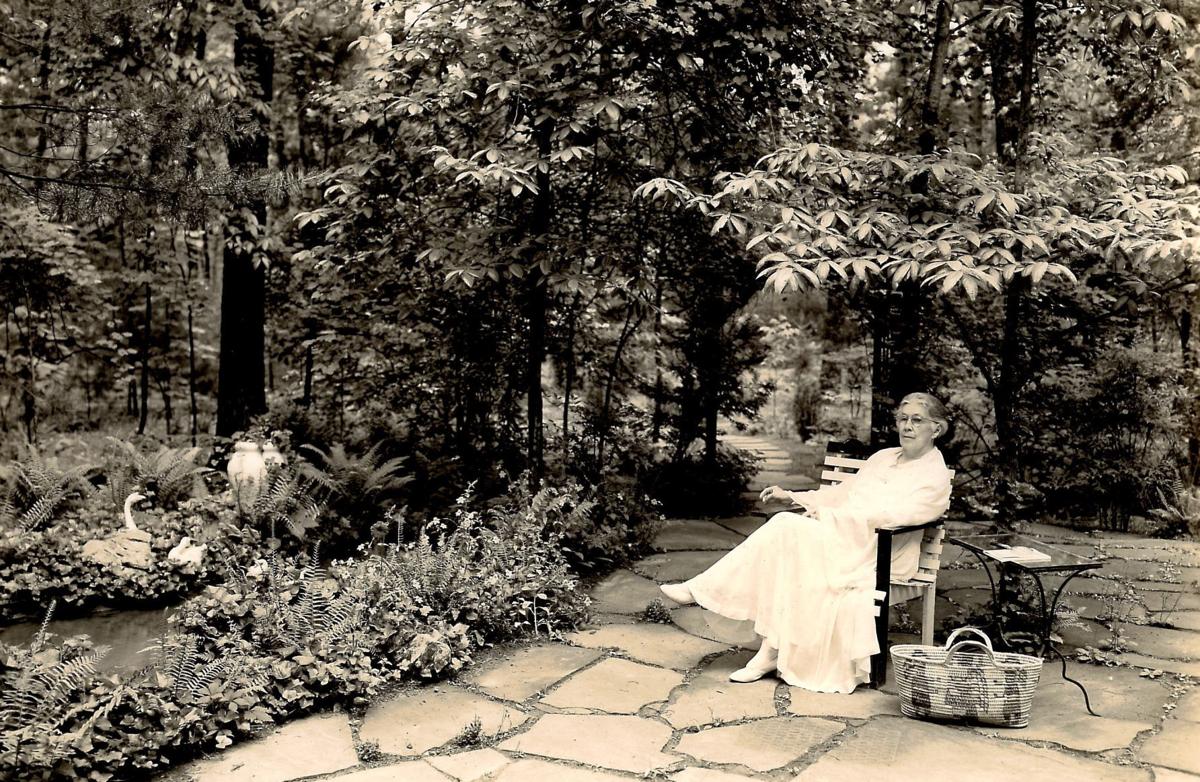 Susan Wiley Walker sits on the grounds of “Morningside,” the 26-room estate that became RT Lodge. 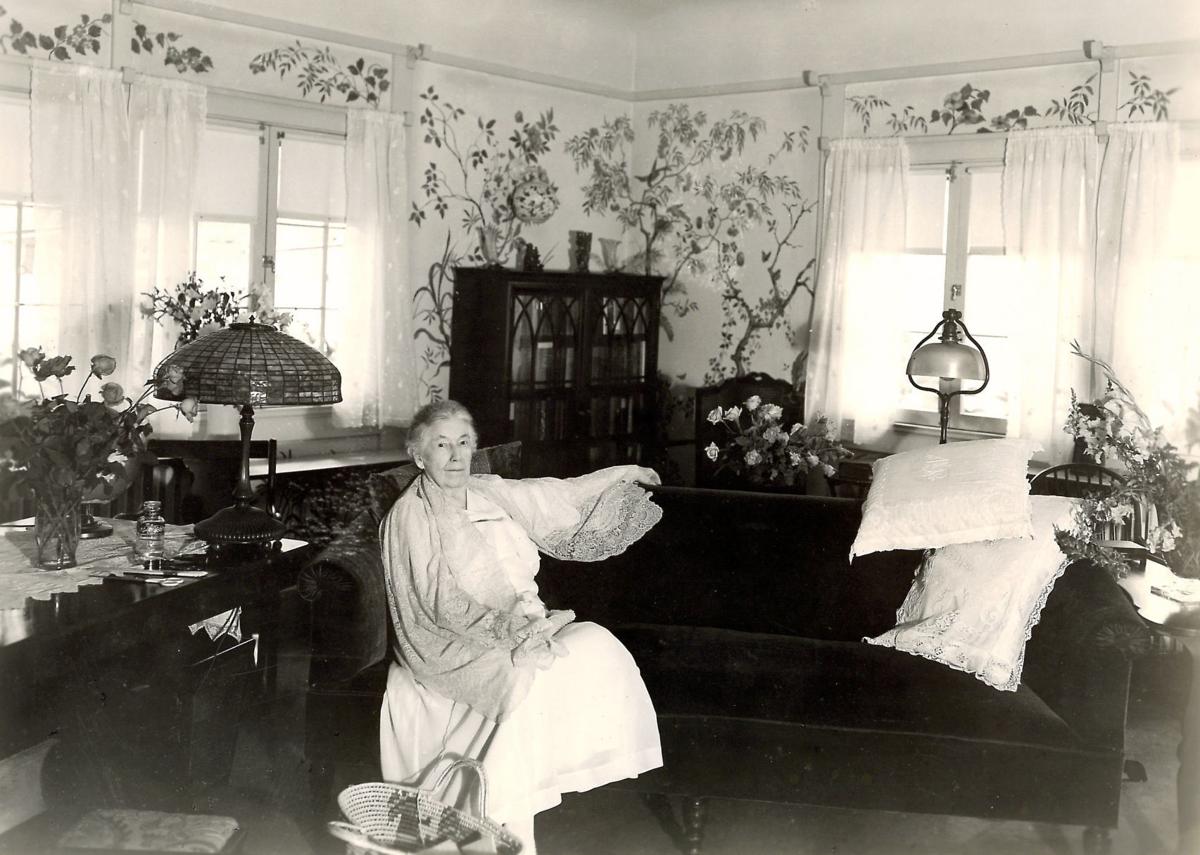 Susan Wiley Walker at “Morningside,” the estate she built in 1932 in the Maryville College Woods. Located on Wilkinson Pike, it became the hotel and restaurant known today as RT Lodge.

Susan Wiley Walker sits on the grounds of “Morningside,” the 26-room estate that became RT Lodge.

Susan Wiley Walker at “Morningside,” the estate she built in 1932 in the Maryville College Woods. Located on Wilkinson Pike, it became the hotel and restaurant known today as RT Lodge.

She may not walk those woods in a long black veil, but the ghost of Susan Wiley Walker still looms large over RT Lodge.

This weekend, Walker’s ghost also will inhabit a play about her life and her contributions to Maryville College. “To Know You” is an original work by playwright Mary Donnet Johnson, whose discovery of the story behind the hotel and restaurant — located in the Maryville College Woods off Wilkinson Pike — led her to an appreciation of Walker’s role in an architectural and historical gem of Blount County.

“I was originally going to write a show for myself — I thought, ‘OK, I can play an old lady, so we’ll do this’ — but I really discovered how rich the history was when I met Martha Hess,” Johnson told The Daily Times recently. (Hess served as registrar at Maryville College from 1974 until her retirement in 2009 and now volunteers in the college’s Archives.)

“I was entranced by how fine (Martha’s) mind is and how keen her memory is, and after I spent an hour with her doing research, I immediately knew it was a much bigger story,” Johnson added. “So I said, ‘Would you like to play with me?’ And I gave her an assignment: ‘Give me five or six stories from your vast knowledge of this woman, and I’ll put together some vignettes, and we’ll see what we have.’

“So I put them together and came back to her, and we read all of the parts, and her eyes lit up. I think she thought to herself, ‘This will be a fun bicentennial thing,’ and that’s when the wheels started turning.”

“This woman,” as Johnson refers to her, is Walker, who first came to this area in 1932 to live closer to her sister, whose husband, William Patton Stevenson, was the chaplain of Maryville College in the 1920s and ’30s. Walker’s late husband had been a business partner of Andrew Carnegie, a steel tycoon who at one time was one of the richest men in American history; as his partner, her husband was quite wealthy himself, and after his death, Walker inherited it.

In Blount County, she fell in love with the far reaches of the college’s campus and arranged with the university’s trust to build a home in the Maryville College Woods, near her sister and brother-in-law. The 26-room home became known as Morningside, and Walker supervised both its construction and the landscaping of the lawns and woods around it.

Her meticulous eye for natural beauty helped preserve much of the wooded area that surrounds the building today, which became a home for Maryville College presidents and is now operated by the Maryville-based restaurant chain Ruby Tuesday.

Over the years, the Lodge has become an intimate conference center, a rustic bed-and-breakfast-style retreat for visitors and a fine dining restaurant that uses locally sourced produce and ingredients. Its origins, however, have remained something of a local secret, with guests often overlooking or ignoring the sepia-toned photographs of Walker that hang on the walls of the lodge.

Johnson, however, felt them calling to her when she visited the property in January 2018. A resident of Nashville who came to Tennessee from Vermont, Johnson’s husband used to work for Ruby Tuesday, having retired in 2008. The general manager of RT Lodge, Gary Doyle, is an old friend the couple has known for 30 years, Johnson said, and the two often stayed at RT Lodge on their visits to East Tennessee for both business and pleasure.

“I was probably over here doing some work; I really don’t remember,” she said. “I just remember going for a walk, and I think what struck me was that the woods seemed so very well cared for, so vibrant and alive, like somebody had really paid attention to the experience someone would have in those woods. Then I saw the pictures on the wall of her, and I asked, ‘Who is that?’

“That’s when I found out she is the person who built that building as her home, and I later found out she had taken a great interest in the woods. She planned the paths, she planted a botanical garden near the amphitheater, and I just found myself thinking, ‘Oh my goodness, if we don’t reclaim this life, it will grow over, too!’”

And so “To Know You” was conceived, and on Friday night, it will be birthed on the stage of the Lambert Recital Hall of the college’s Clayton Center for the Arts. The story, according to a press release from the college: “The play is set just a few weeks before Maryville College’s Bicentennial, when a young archivist is racing to find more information about an almost forgotten figure in the College’s history: Walker. Just as the archivist makes an important discovery, the benevolent ghost of Mrs. Walker appears and conjures a series of entertaining characters from her era who emerge from the dusty files to bring their stories to life. As this mystical journey unfolds, we are taught important lessons about the value of connection and the wisdom of preserving our precious past.”

It’s a message that’s resonated with Johnson from the beginning, and as her world progressed, serendipitous turns of events reassured her that she was on the right track, she said.

“The doors have flown open for me, as though this benevolent force of nature has been walking ahead of me, just throwing them open,” she said. “When we started, we had nothing — no budget, no idea what it was going to look like, no actors in mind, and we didn’t know how we were going to do the physical performance itself or where it might be. Now, here we are at the Clayton Center with fantastic student actors and professional actors from two states. A few people showed up anonymously and contributed to the project, and we have no idea who they are, but they’ve allowed me to pay the professional actors.

“We have antique dolls that Ms. Walker gave to Peggy (Cummings Campbell, MC class of 1950), who is 91 and was 10 years old when she knew Ms. Walker, who had a piano delivered to her door. She still has that in her family, and she had two antique dolls that Ms. Walker gave to her and her sister that will be featured on stage during the play. People’s participation has been so touching, which is just like Ms. Walker herself: Honestly, most people don’t know about her, because she didn’t ever put her name on anything, so to have these anonymous donors come through is very much in the spirit.”

That spirit continues to affect other areas of Johnson’s life: Her next work is a play called “Power,” which is about three women in a Vermont nursing home visited by a 14-year-old eagle huntress from Mongolia. It springs from Johnson’s imagination but was inspired by a New York Times story about Mongolian eagle hunters, and during its conceptual stage, Johnson was visiting RT Lodge when she discovered that her server was an exchange student … from the eagle hunting region of Mongolia. They struck up a conversation, the server wrote down her name and number for Johnson to stay in touch and back in her room, she pulled the piece of paper from her pocket.

The young exchange student’s name, it turned out, is also the name Johnson had chosen for the eagle huntress in “Power.”

“I just feel like Ms. Walker is not only helping me with this project, but pushing me toward the next one as well,” she said.

And in so doing, imparting lessons that carry through the story of “To Know You.” As a professional writer and actress who put her career on hold for two decades in order to care for a son with severe autism, she’s struggled with doubt since she resumed writing and acting again. Could it be, she wondered, that opportunity had passed her by?

And then, she added, she remembered Susan Wiley Walker — who was 80 years old in 1932 and built a manor house that became a grand old lodge that’s now being celebrated as part of Maryville College’s Bicentennial.

“For a person of 80 years old to finally find themselves free to be exactly who they wanted to be and do exactly what they wanted to do in the world, that’s so appealing to me,” Johnson said. “My own mother started composing music at age 70. Susan took up painting at age 70. A lot of folks turn the corner and really relish the final chapter of their lives around the age of 70.

“It’s a comfort to myself, and it helps me to think that I didn’t lose all of those years and didn’t get behind. I look at Ms. Walker and say, ‘Your best years may be yet to come.’ I think any of us who have lost time in one way or another can take great comfort in saying, ‘I’m going to start right now, today,’ and then decide that this is going to be your best decade.”

WHERE: Lambert Recital Hall of the Clayton Center for the Arts, 502 E. Lamar Alexander Parkway, on the Maryville College campus

HOW MUCH: Free (but printed tickets are required)