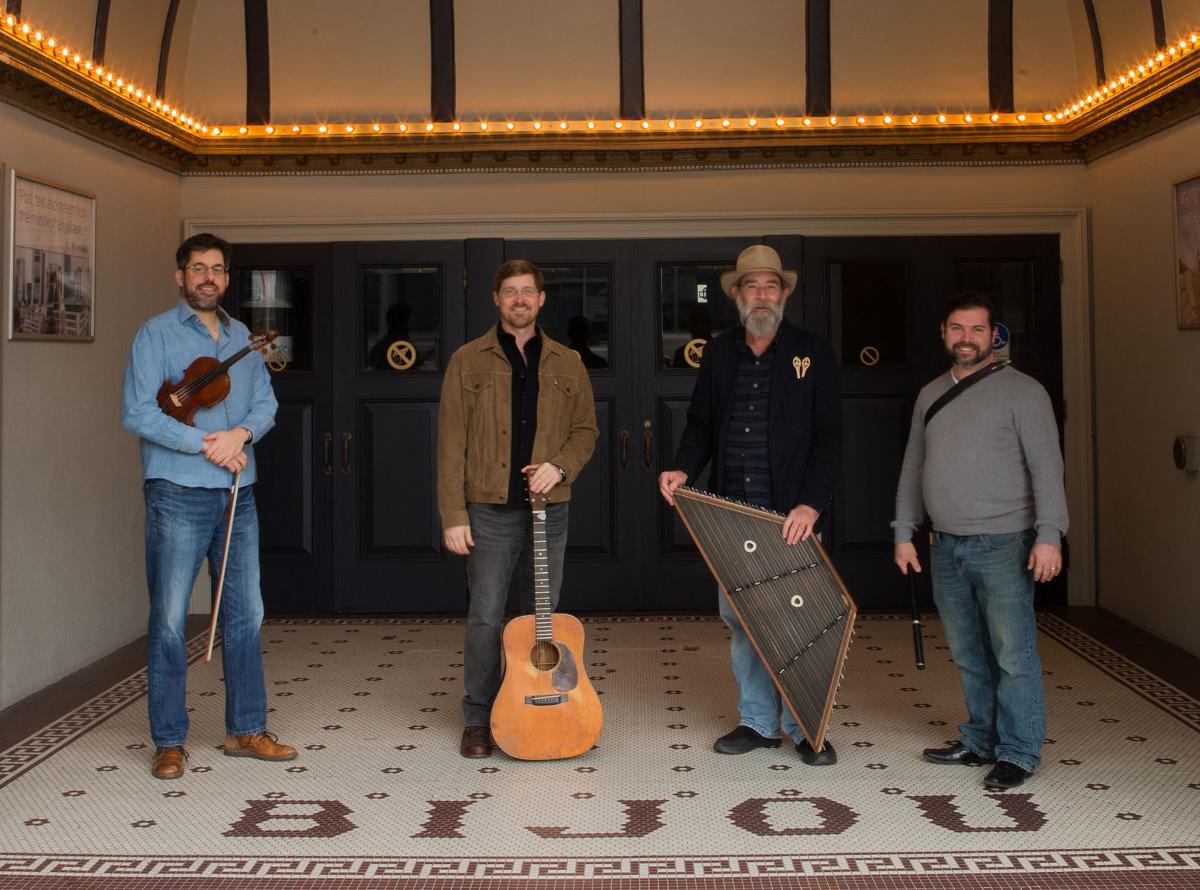 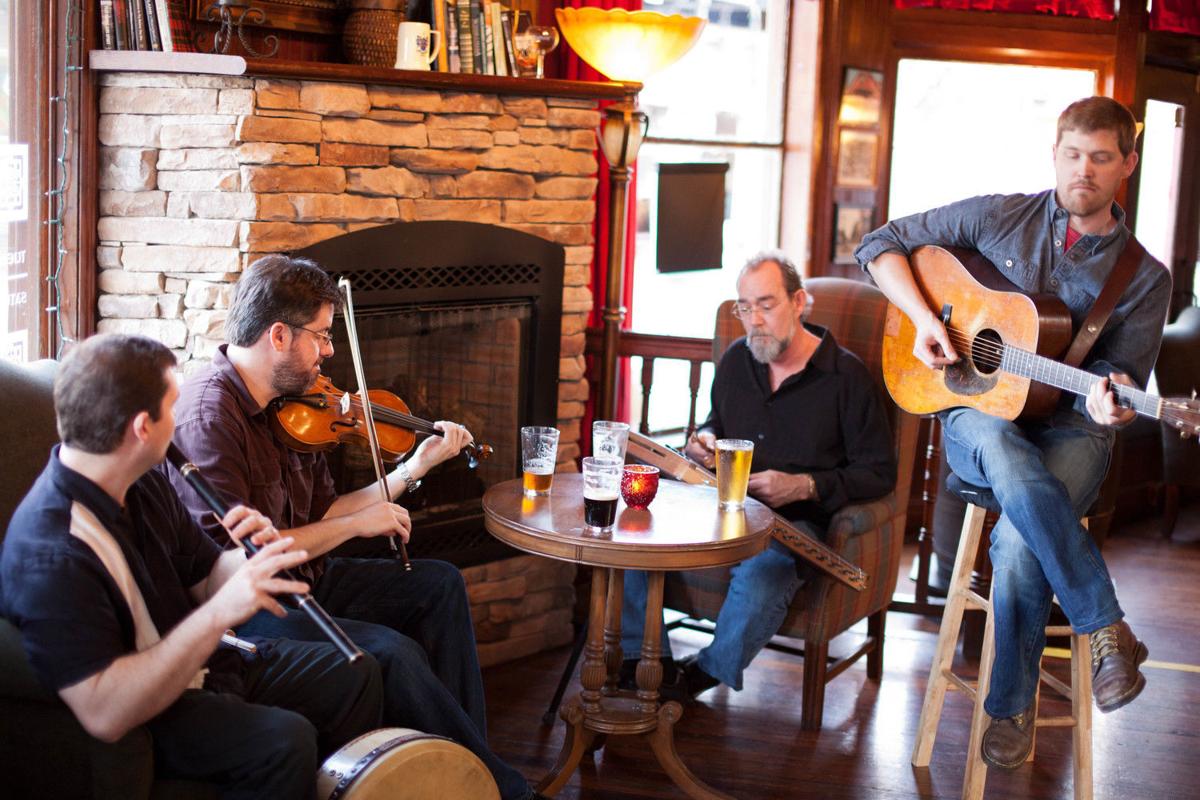 Can’t make it to downtown Knoxville for St. Patrick’s Day? Four Leaf Peat — Jason Herrera (from left), Chad Beauchaine, Rick Hall and Gil Draper — also will perform in May on the Maryville College campus for the Smoky Mountain Scottish Festival.

Can’t make it to downtown Knoxville for St. Patrick’s Day? Four Leaf Peat — Jason Herrera (from left), Chad Beauchaine, Rick Hall and Gil Draper — also will perform in May on the Maryville College campus for the Smoky Mountain Scottish Festival.

At the time, Draper — who plays guitar, mandolin and bouzouki for Four Leaf Peat, East Tennessee’s premier Celtic music ensemble — was a bluegrass man. In the early 2000s, he was the mandolin player for Walden’s Way Ramblers, a group that played often around East Tennessee, but on a particular night out by himself, he wandered into the Old City, headed to Patrick Sullivan’s.

In the window, he remembers, he saw his people: Musicians, sitting around casually, picking and playing. Inside, the sounds of traditional Irish music greeted him, and while he had probably heard it before, in that moment, the warmth and richness of those sounds seized him immediately, he told The Daily Times recently.

“I thought, ‘What is this? This is great!’ And I fell in love with it,” Draper said. “I was really into Bill Monroe’s traditional tunes, and what I didn’t know at the time was that they were really influenced by traditional Irish music, and I thought, ‘Wow — this is the music I’ve been waiting for.’ Just the feel of the music grabbed me, and I really liked the communal nature of it — people getting together and sitting in a circle and playing, where everybody just plays the melody and kind of grooves to the music.

“Pretty much right then, I decided I was going to pursue Irish traditional music full time. I gave up bluegrass and quit the band, and that’s when I met the other guys and joined their band, Four Leaf Peat.”

And now, Draper’s time in Four Leaf Peat has come to an end. There are still a few gigs left with his three old friends, including Tuesday’s annual St. Patrick’s Day bash at The Bijou Theatre in downtown Knoxville. But when Draper hits his final notes in May — at the Smoky Mountain Scottish Festival, on the campus of Maryville College, no less — he’ll step away from Four Leaf Peat for the foreseeable future, he said.

“It’s really just a personal decision,” said Draper, who describes himself as “the quiet one” among the foursome that’s made its bones everywhere from the Laurel Theater to Boyd’s Jig and Reel to Market Square. “I guess in my personal life, I just decided I needed a little bit of a break from the day-to-day grind of work. I’ve been working for the past 18 years with hardly more than a couple of weeks’ break at a time, and at this point, because I’m single with no kids, I just felt like I needed to take a little sabbatical.

“I’m just going to take a little break and do some traveling, to enjoy life and get out of the daily grind of working all the time and just enjoy life while I have this opportunity. I don’t know exactly where I’ll land or how long I’ll be gone, but there are lots of places I just want to travel and go see, and then I’ll just kind of take it day by day.”

Four Leaf Peat will go on, but Draper’s departure is a milestone: It’s the first lineup change in more than a decade, and only the second in the band’s 15-year career. The band got its start when fiddler Chad Beauchaine, hammered dulcimer/bodhran/Uilleann pipes player Rick Hall and bodhran/flute/whistle player Jason Herrera start performing together at McGee’s Irish Pub on the Cumberland Avenue “Strip” in Knoxville before moving to Patrick Sullivan’s. When Draper joined the fold, his bluegrass background quickly got him ahead of the learning curve, he said.

“I was mostly playing mandolin at the session when I first got started, but I realized it would be a better fit if I focused on more of an accompaniment instrument, so I decided to focus on bouzouki accompaniment and guitar, and pretty much stuck with that,” he said.

Together, Draper and his bandmates — Beauchaine is a classically trained concert violinist, Hall’s background in the Old Time scene made him a fixture among the Laurel Theater crowd and Herrera came from Knoxville’s diverse and talented jazz world — began to craft a culture around the music they played. It would have been easy to thrash through Irish drinking songs, but their professionalism demanded something more, and as a result, they’ve combined the emotional history and traditions of the British Isles with other Old World sounds: from Gypsy flourishes to French-Celtic music to the North African rhythms to Spanish-Celtic songs.

The seeds of all those styles were carried over by immigrants who moved into Southern Appalachia in the late 18th century, and that’s the stock from which the members of Four Leaf Peat come. As their talents began to mesh, they began to grow beyond the boundaries of those Patrick Sullivan’s jams, and St. Patrick’s Day became a staple of their concert calendar. Once they maxed out the capacity of The Square Room in Knoxville, they moved up to the Bijou, where they recorded a live album a few years ago and continue to return every March 17.

Those Bijou shows, Draper added, are a particular feather in his personal cap.

“I totally wouldn’t have expected, when we first started playing in this band, that we’d be playing at the Bijou and having such an awesome turnout,” he said. “Playing on such a big, beautiful stage — probably one of the greatest I’ve been to for listening to music, although the quality on stage is incredible, too — is just amazing. Also, we do quite a bit of gigs traveling around all over the Southeast and getting to go to various festivals. I’ve met all kinds of people who have become really good friends over the years.”

None closer than the three men whose fondness for traditional Irish music deepened thanks to the bond they share. Passion and dedication, Draper added, have been the linchpins that held the band together, because those qualities made every show an experience.

“We all have a genuine love and passion for the music, but I also consider these guys some of my best friends,” he said. “Even without the band, I’ll keep in touch with them no matter what. We get along great, and we’re good friends, and we all kind of delegate our different tasks for the band, because it’s not just about playing music. It’s a lot of work, because it’s also a business, and you have to deal with booking gigs and ordering merchandise and traveling. But we really just enjoy it.”

When he broke the news to his three comrades, they were understandably disappointed but encouraging as well. After all, between his trade as a luthier and his time with Four Leaf Peat, music has consumed Draper’s life for years now, and a much-needed break is definitely in order. He plans to head to Glacier National Park first, where he spent time in college, and do some hiking elsewhere in the Pacific Northwest. There’s even a trip to Ireland in his future, he feels confident, and he doesn’t rule out a return to the Four Leaf Peat fold as a guest of the band, at some point in the undetermined future.

“They’re my good friends, and that camaraderie — getting together for band practice, cutting up and having a good time and joking around with each other — I’ll miss that,” he said. “The gigs are fun, but for me personally, it’s mostly just hanging out with my buddies that I’ll miss.”