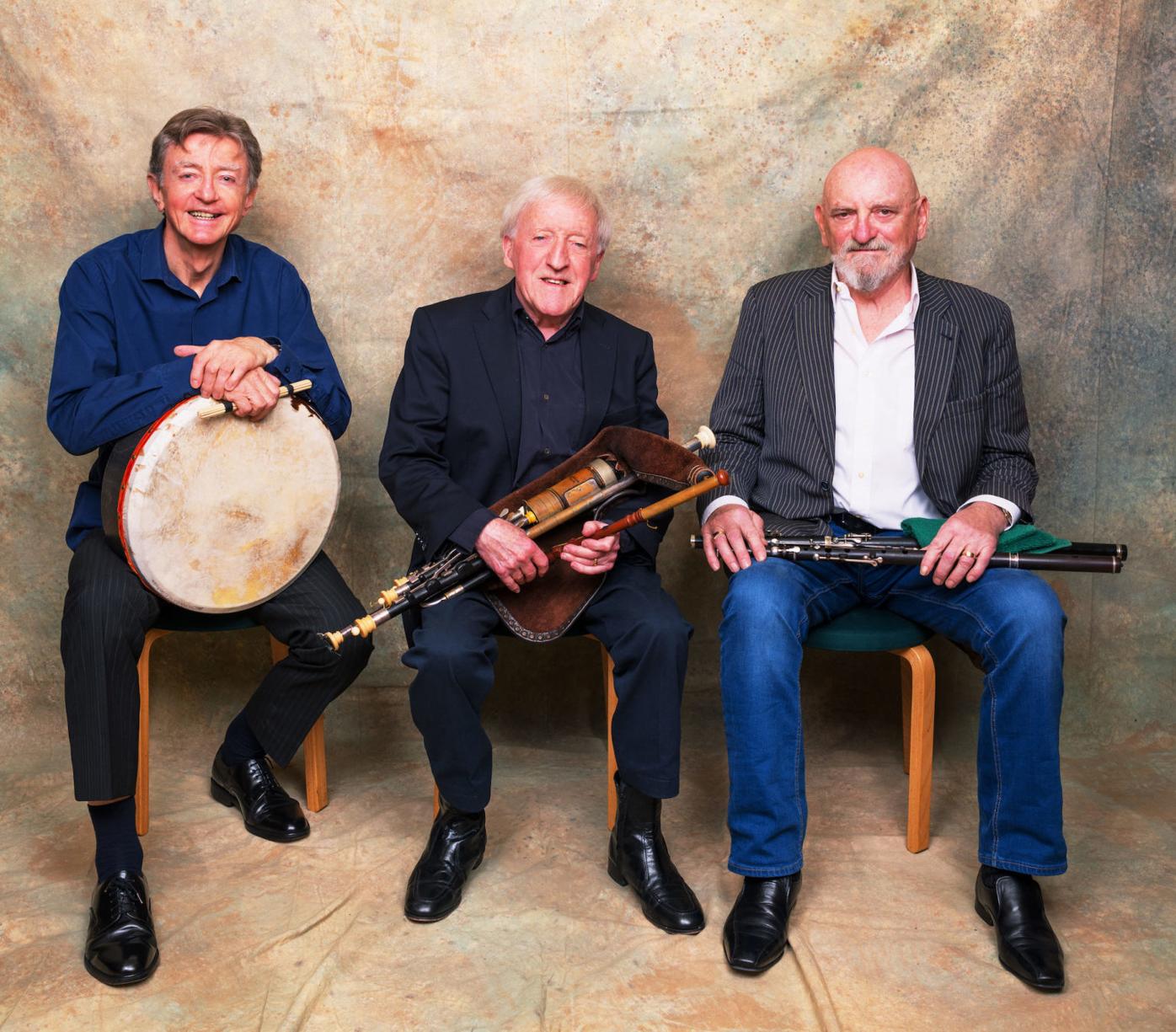 The Chieftains — Kevin Conneff (from left), Paddy Moloney and Matt Molloy — will bring their “Irish Goodbye” tour to the Clayton Center for the Arts on Friday. 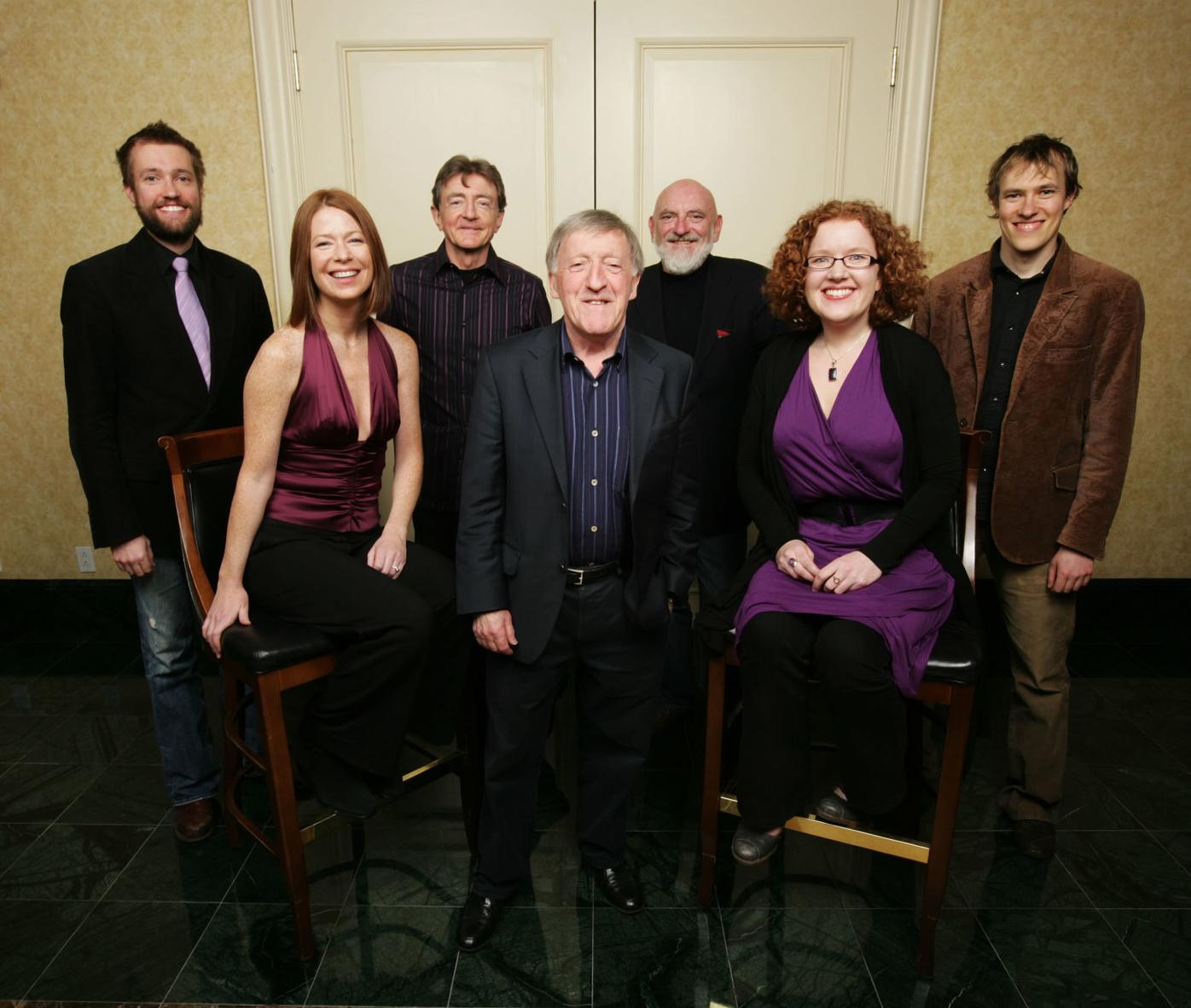 Paddy Moloney (center) will bring his two long-time bandmates and a cast of auxiliary musicians to Blount County on Friday for a performance by The Chieftains.

The Chieftains — Kevin Conneff (from left), Paddy Moloney and Matt Molloy — will bring their “Irish Goodbye” tour to the Clayton Center for the Arts on Friday.

Paddy Moloney (center) will bring his two long-time bandmates and a cast of auxiliary musicians to Blount County on Friday for a performance by The Chieftains.

It’s 10 a.m. on Jan. 22 in East Tennessee, but on the other side of the Atlantic, Paddy Moloney is marveling at the very un-Irish weather that’s blessed him on this particular day.

“I have to tell you, it’s a very mild day and quite beautiful,” Moloney says, speaking by phone to The Daily Times, his brogue untamed by the occasional crack and hiss of an international connection. “There’s a bit of sunshine and that sort of stuff, which is very unusual for Ireland.”

This week, however, Moloney will leave the familiar environs of the Emerald Isle, a place he’s lived his entire life when not on tour, and bring his acclaimed Celtic band, The Chieftains, to America for a U.S. tour that will keep them on the road through March 19. And the first stop: Friday night at the Clayton Center for the Arts, on the Maryville College campus.

“We’re looking forward very much to the concert, and it’ll be a big show,” says Moloney, 81. “Everybody should do a bit of a solo, so we’ve got that, and then we’ll start off the show with a montage of photographs of people we’ve met and played with and recorded with over the years, folks like Tom Jones and Sting and the like.”

He pauses, the band’s longevity still clearly a marvel, even to the man who founded The Chieftains in 1962.

“58 years now, would you believe?” he says, chuckling. “Total madness.”

Although Irish music seems fairly common in the United States these days, that wasn’t always the case. And even in areas blessed with an abundance of Celtic musicians and groups — Four Leaf Peat, Tuatha Dea, the Good Thymes Ceilidh Band and even the Celtic punk-pirates in Cutthroat Shamrock — many, if not all, of them attribute at least some of their inspiration to The Chieftains. Moloney is grateful for the nod, he said, but the way he sees it, Irish music is timeless. At least, it certainly existed long before he founded The Chieftains.

“From the time I was 8 or 9 years of age, I was playing traditional music on the pipes, with various groups during my teens,” he says. “But there were others who did such a great job, like The Clancy Brothers, who made popular the Irish ballads and songs just as we did. I had my own feeling for it and how to put it together, and we did it, and eventually everything started to fall into place.”

The band first formed in 1962, and throughout the rest of that decade, they toiled throughout Ireland, eventually earning enough money to make a record. A self-titled effort was released in 1964, and because the band was, during that period, a part-time effort, it wasn’t until 1969 that The Chieftains went into the studio to make a second record. Although that was one of the band’s first brushes with musical legend, it certainly wasn’t the last.

“In 1969, The Beatles were doing ‘Abbey Road,’ and they very kindly gave me a half a day (in the studio) for my ‘Chieftains 2’ album,” Moloney says. “To see John Lennon and Paul McCartney and say hello and this and that and whatever, it was a great honor. As far as they were concerned, it was our music that shined, and they loved it and how we did it.”

That sort of respect led dozens of artists, from unknowns to world famous musicians, to seek out The Chieftains for collaboration. Van Morrison revitalized his career in 1988 with “Irish Heartbeat,” an album recorded with The Chieftains, and the band’s 1995 release, “The Long Black Veil,” included songs recorded with Sting, Sinead O’Connor, Mark Knopfler and the Rolling Stones. Working with the Stones, Moloney says, was an experience in and of itself.

“They were going to come into the studio in Dublin, and getting them there was some doing,” he says. “They were supposed to come at 2 p.m., and for hours, nobody appeared from their entourage or anything. I was saying to myself, ‘That’s it. They’re gone. It’s not going to happen.’ But about 7 o’clock in the evening, they turned up, and we had a tremendous session. They showed us tremendous respect and didn’t smoke in the studio, because they knew I was allergic!”

The day before, Moloney and his two long-time bandmates — Kevin Conneff, who joined in 1976, and Matt Molloy, who became a Chieftain in 1979; along with founding member Martin Fay, who left the group in 2002 and died a decade later — had cut the title track with Stones frontman Mick Jagger, but getting the whole band together was a musical adventure. Drummer Charlie Watts had never played in 9/8 rhythm before, Moloney said, and the collected ensemble tinkered in the studio until Moloney ran out of gas.

“About 1 a.m., I had brushed the bottom, and I said, ‘Lads, if you don’t mind, let’s put it on tape,’” he says. “And so we recorded ‘The Rocky Road to Dublin,’ and at 3 in the morning, a good friend of mine owned a pub around the corner, so we went around for pints to finish off the night.”

Those are the stories that are part of the band’s legacy, along with the moments that still strike him dumb, he adds: Last year, during a performance in Canada, he walked out to the audience giving The Chieftains a standing ovation, something that never fails to give him chills.

“People love us, and they want to hear us, and we’re going to give it to them,” he says. “We’ve got a tremendous variety of various kinds of music, all based on good old Irish traditional music. We’ve gotten tremendous honors for it over the years — six Grammys, being named the honorary chairman of the Japanese Uilleann Pipers Association, a gold medal last year from the King of Spain, the Oscar for ‘Barry Lyndon’ in ’76, six Grammys — and they were all little added, great things that boosted us in ways and boosted the music.”

While he’s grateful for the recognition, he never loses sight of why he began playing Irish music in the first place: out of love. It’s the sound of history, of culture, of a wild and wonderful untamed land that’s beloved by people who have never been but feel a kinship to it nevertheless. There’s a reason, after all, that The Chieftains are synonymous with the Emerald Isle, and why every performance is an opportunity to serve as ambassadors, he adds.

“We’re reminiscing a bit on this tour, doing some older pieces that will be included in the program, along with some great young musicians and singers who will be with us,” he says. “There’s just tremendous variety all the way through, and we always have special guests appearing. We never know who will show up, but on the night of, they just come, so we’ll see what happens.”

The tour’s title — “The Irish Goodbye” — shouldn’t serve as a portent of finality for The Chieftains, he adds. Although admittedly, he points out, he’s “not getting any younger in the tooth,” there are plans in the works for a 60-year anniversary concert in 2021 in Brittany, in the Celtic region of Northwest France, and fans keep asking when the band will return to Japan. There’s a documentary in the works, and recording-wise, Moloney says, he’s been asked about doing two additional albums.

Asked about retirement, he laughs: There is too much magic between himself and the other lads to walk away.

“Every day, I just get up, and something has to be done,” he says. “For this particular tour, I thought we were going to go (to America) and maybe do two weeks, but now it’s up to five weeks, and it’s terribly hard to not accept it. Yes, there’s the travel and all the hassle of getting there, but once we hit the boards, it’s all there.

“I remember one particular concert with an orchestra in Pittsburgh, and there were 150 people on stage, and when we did this outro at the end, the audience got up and did this snake dance all around the hall. I remember doing it in Carnegie Hall one time, and they went berserk, because of insurance! This is what we rogues of Irish musicians are up to — we create this thing and people love it.”

WGBH Music: The Chieftains - The Frost is All Over (Live)

The Chieftains: "The Irish Goodbye"

HOW MUCH: Sold out