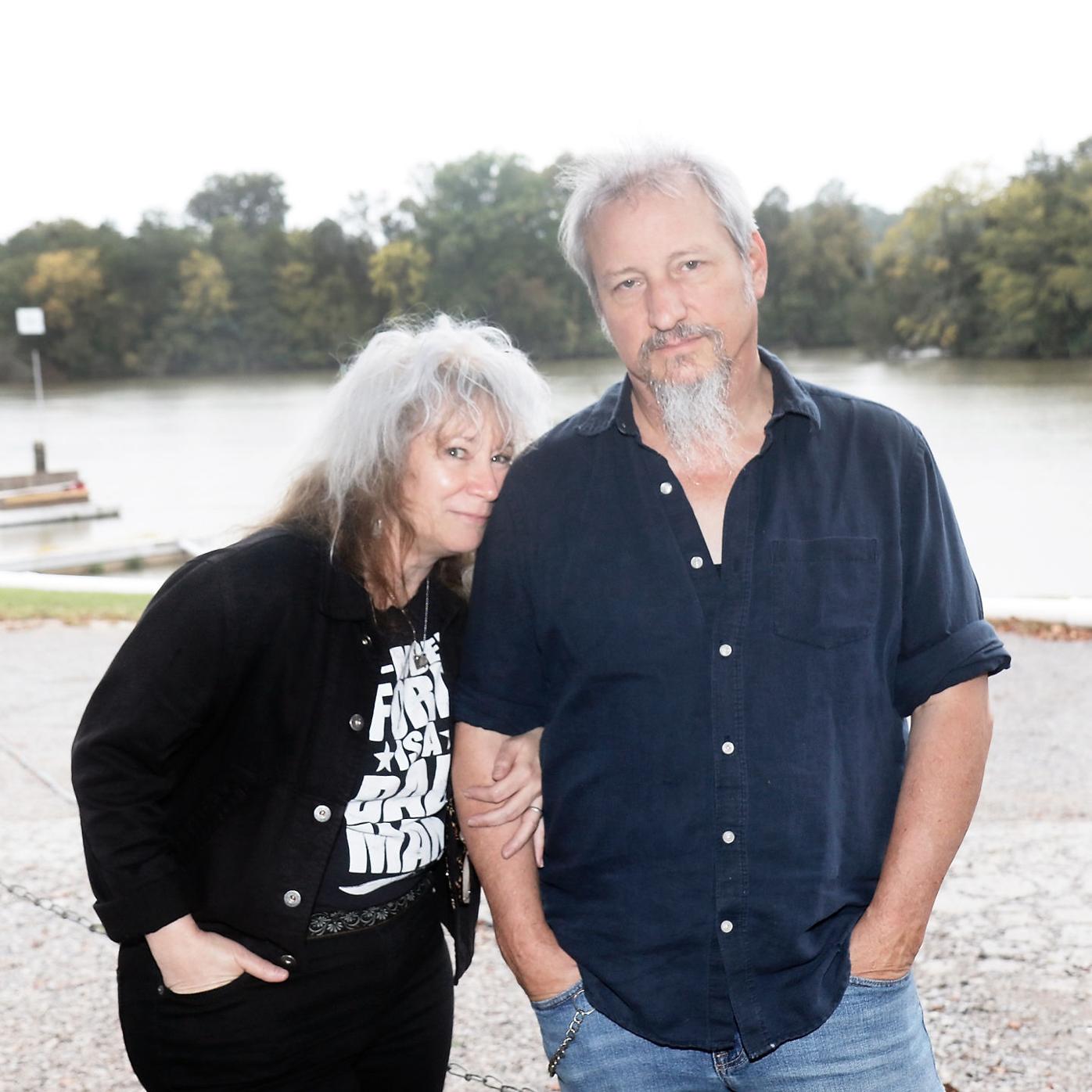 Susan (left) and Tim Lee will release “Year of the Dog,” a new album by their duo Bark, on Friday at The Pilot Light. 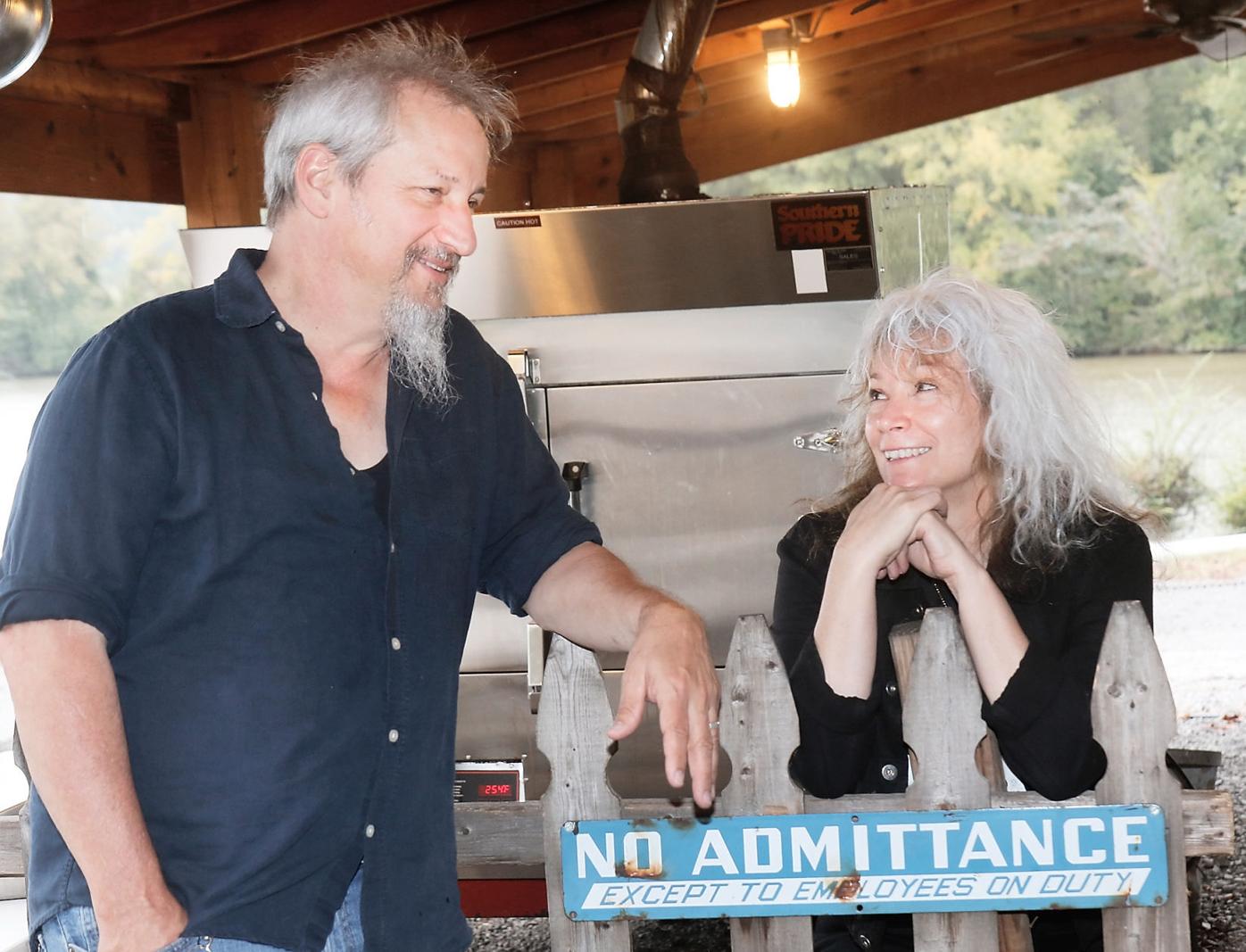 Tim (left) and Susan Lee, outside Sweet P’s BBQ during a recent “Songwriters in the Soul House” performance, which they host and open monthly. 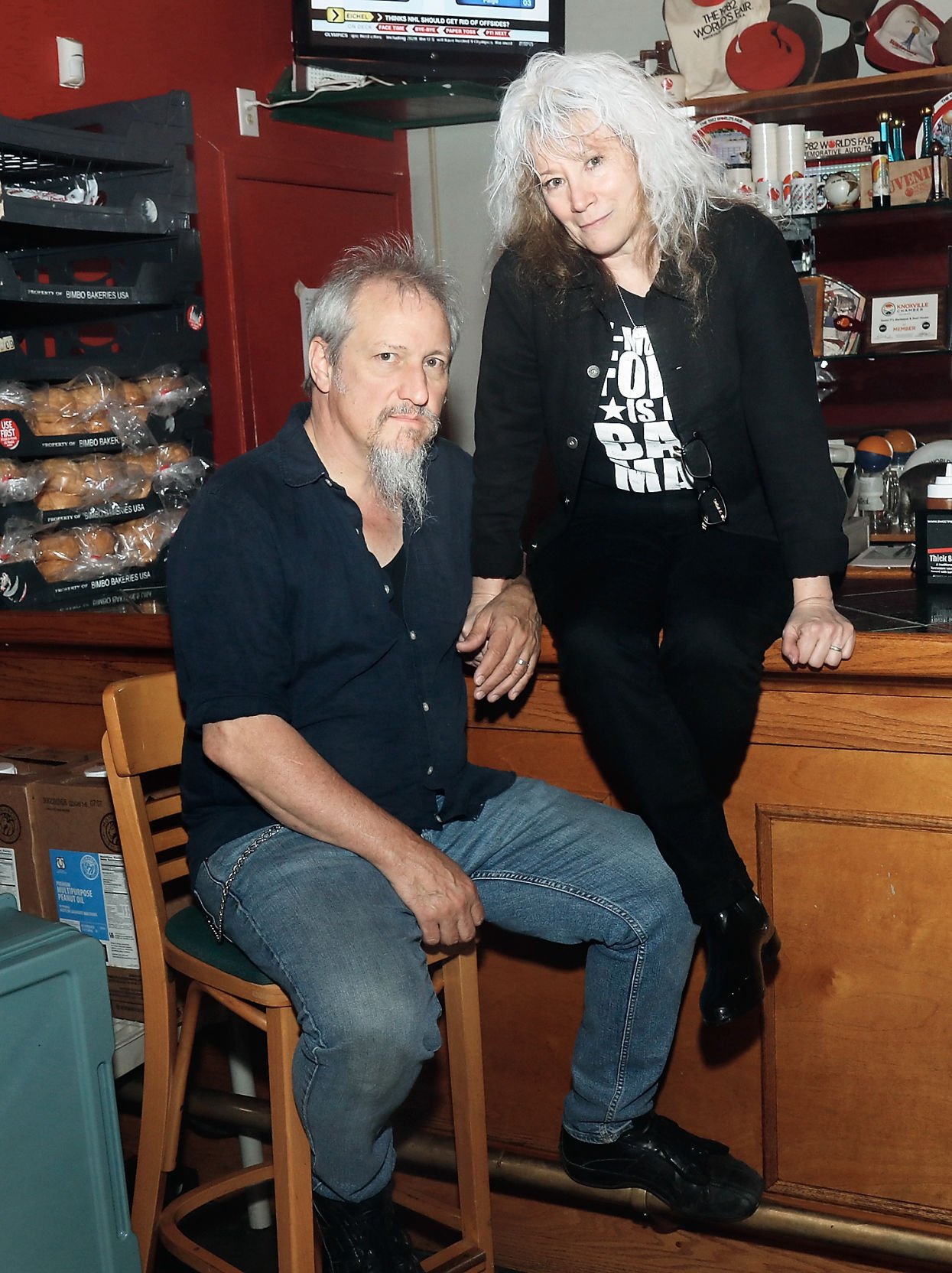 Tim (left) and Susan Lee perform as the blues-rock duo Bark, and they’ll release a new album Friday at The Pilot Light in Knoxville. 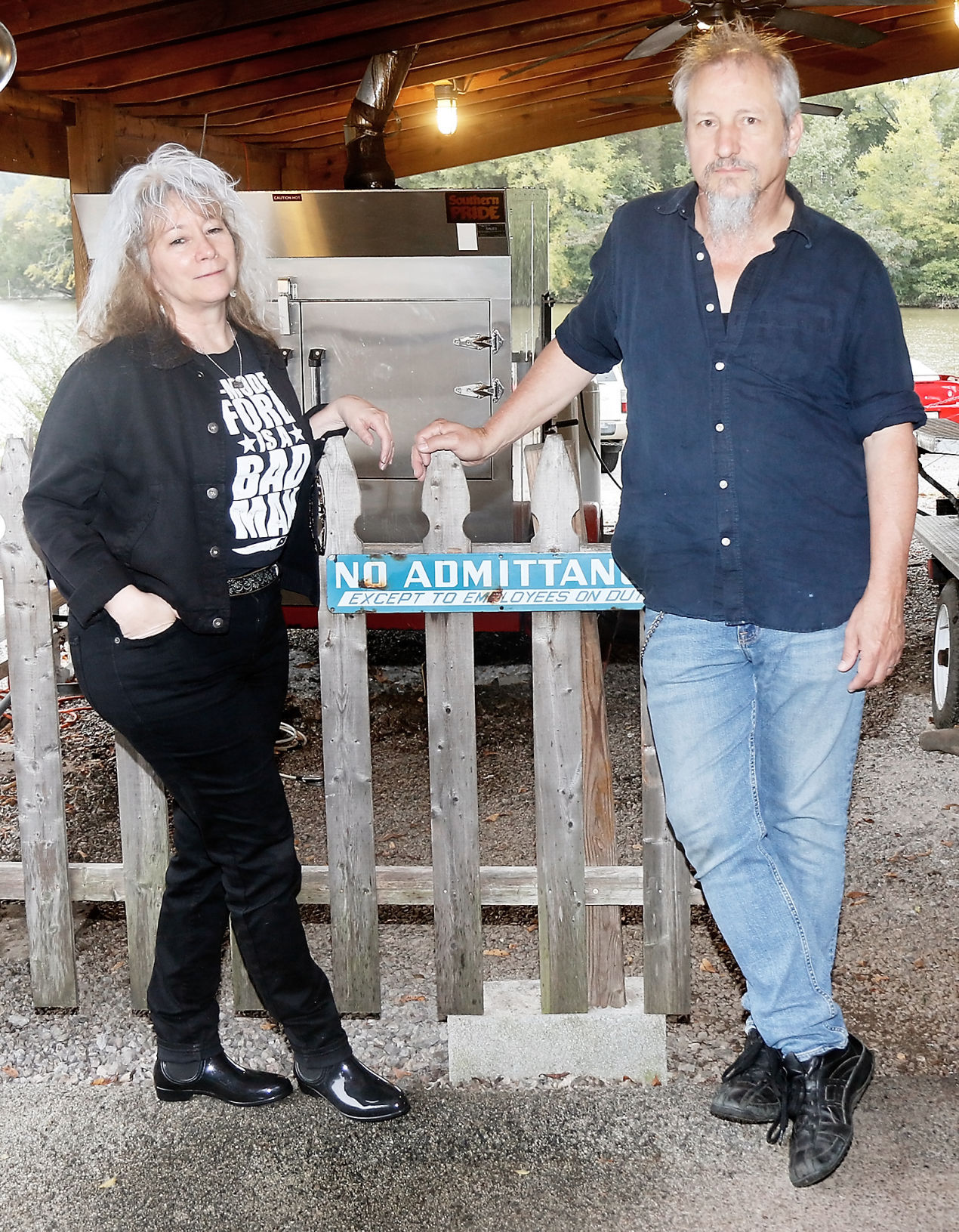 Susan (left) and Tim Lee will play Knoxville on Friday at The Pilot Light.

Susan (left) and Tim Lee will release “Year of the Dog,” a new album by their duo Bark, on Friday at The Pilot Light.

Tim (left) and Susan Lee, outside Sweet P’s BBQ during a recent “Songwriters in the Soul House” performance, which they host and open monthly.

Tim (left) and Susan Lee perform as the blues-rock duo Bark, and they’ll release a new album Friday at The Pilot Light in Knoxville.

Susan (left) and Tim Lee will play Knoxville on Friday at The Pilot Light.

It was a surreal experience for Tim and Susan Lee, being on the receiving end of an outpouring of love and musical support.

The husband-and-wife team, formerly of the Tim Lee 3 who are now focusing exclusively on their blues-rock duo Bark, has long been the crutch upon which various East Tennessee rock ‘n’ roll benefits have relied. From the annual Waynestock festival to charitable fundraisers for individuals like the late environmentalist Rikki Hall to Otterfest to regular early-start showcases at The Pilot Light in Knoxville’s Old City, the Lees are the first ones to raise their hands whenever a need arises. And so, after Susan’s father died following a lingering illness last month and Tim’s mother passed unexpectedly within the same week, their friends and musical peers stepped up to turn the tables.

For an entire Sunday afternoon last month, band after band took to the porch stage at Lost and Found Records in Knoxville. Friends brought covered dish offerings. And dozens of folks lined up to hug the Lees and offer condolences and solidarity. It was, needless to say, a little overwhelming for both of them, they told The Daily Times recently.

“It was unbelievable that people cared that much to put that much effort into something like that,” Tim said. “You just don’t know how to feel, but ultimately you have to be grateful. For me, it was like my favorite ‘holiday,’ Record Store Day, except without the special releases and deals.”

“Oh my God, it was so humbling,” Susan added. “I was just floored. When you’ve spent years doing that sort of thing for other people, and then somebody wants to do it for you, you don’t know what to think. ‘For me? Really? Me?’ It was just amazing.”

Much of the credit for the deluge of love goes to just how embedded the Lees are in the East Tennessee music scene, but an equal amount should be attributed to their prodigious musical talent. Few guitarists are as flexible as Tim, who’s able to slide into just about any musical setting with a six-string and make anyone he plays with sound better, from the garage skronk of Pilot Light regular Will Fist to the cerebral lit-rock of Knoxville poet laureate R.B. Morris to the exploratory soundscapes of New York jazz-fusion transplant Mike Baggetta. And few musicians are as determined as Susan, who woke up one morning several years ago determined to play bass and, in the not-too-distant past, did the same thing with the drums.

With Bark — a natural choice for a band name, given their well-known love of dogs, in particular Basset hounds — they’ve stripped down what they do to its bare essentials. It’s a bare-bones approach to what they’ve done for years as the Tim Lee 3 and, before that, Tim’s tenure in the power-pop band The Windbreakers. And while it might seem like a natural thing to incorporate the juke-joint blues that proliferates backwoods dives in their native Mississippi, their embrace of it has been a relatively later-in-life development, Susan said.

“Tim grew up listening to the rock ‘n’ roll stuff like Thin Lizzy, and my very first concert was The Monkees,” she said with a laugh. “I was steeped in that bubblegum stuff in the early ’70s, and then we found the punk and the New Wave and the power pop and the Paisley underground in the early ’80s. The blues stuff wasn’t really part of our growing up, but when we lived in North Mississippi, that’s where we heard that stuff. In the ’90s, I was working for Living Blues magazine, and quite honestly, it took a long time for that stuff to seep in. It’s probably only recently that we’ve fully processed what we actually heard while we were living there, and it naturally started coming out in Bark. Bark is the perfect outlet for that influence.”

Tim, of course, is a sonic explorer who’s been dabbling in various genres for almost four decades. The Windbreakers were part of a pantheon of indie rock bands during the 1980s that struggled for commercial acceptance while cultivating underground followings and critical acclaim. Lee’s solo works, Windbreakers albums and various side projects have been lauded by Rolling Stone, Creem, Matter, The New York Times, L.A. Reader and other periodicals. During their heyday, The Windbreakers released six albums and EPs but could never break through in the way their Athens, Ga., peers R.E.M. did.

After a couple of solo records, Lee set music aside during the 1990s; after that, the couple moved to Knoxville in 2001, where the local scene readily accepted him. Susan learned to play bass, and the Tim Lee 3 established itself as one of the area’s finest guitar-driven rock bands, drawing equally on Neil Young and Crazy Horse, Television and Lynyrd Skynyrd. Bark — which celebrates the release of its debut full-length album, “Year of the Dog,” on Friday night at The Pilot Light — shares similarities with their old band, which they “put up on blocks” a year ago, but the framework is almost a more versatile one, despite the absence of extraneous personnel.

“It felt totally natural; we really just sort of fell into this groove that sort of surprised us both, and we were like, ‘Wow! This is a thing! We’ve never had a thing before that was completely our own!’” Susan said. “It was kind of shocking to us, but it felt totally natural. I was practicing downstairs to Creedence — that felt like the first natural thing I could play along with, because it’s just a good, strong, not-fancy drumming style. And when Tim came down and started playing along with me, and we started writing songs again, we knew it was a thing.”

To make up the low-end difference, Tim plays a Fender Bass VI, which is an octave lower than a standard six-string electric. They started pulling out scraps of song ideas that were never fully fleshed out for the Tim Lee 3 and working them up, and it became apparent from the outset that if the Tim Lee 3 is a shiny vintage Camaro IROC-Z, painted bright and buffed out, then Bark is a ’71 Plymouth Hemi ’Cuda, painted matte black with a few Bondo spots on the bumper but with a completely restored engine growling beneath the hood. “Year of the Dog” kicks off with the righteous swagger of “Miss Me,” the two instruments rattling off of one another with a syncopated orneriness that’s the sound of a snarl set to rock ‘n’ roll; a couple of songs later, they’re crawling along the side of the highway like an overheated copperhead on Mississippi blacktop, a steady-and-deadly meander toward an uncertain fate.

As good as the record is, however, hearing it — and seeing it — performed live is an entirely different experience. Few musicians are as attuned to one another as the Lees, who have been married for 35 years; as cool as it is to watch Susan’s white hair fling from side-to-side while she pounds the skins or witness Tim approach a guitar fill — few and far between, mind you, because they don’t believe in frills — with the studious expertise of a surgeon opening up a patient, it’s downright charming when they share a laugh or exchange a smile in the middle of a song. These are songs built on love — for one another and for the music, and that love has kept them going, even through recent hard times.

“We didn’t get to play all summer, because Susan was gone so much (to Mississippi, to help her mother), so it was really good to get this back in the saddle and get it going again,” Tim said. “With everything that went on, I kind of fell behind on the booking aspect, but that seems to be falling into place; and we fell behind on working on new material, but that’s OK, because we tend to work ahead anyway. When she got back, we hadn’t even played together in six or seven weeks, so we had to really hunker down and work at it, but it’s like riding a bike.”

For Susan, getting back behind the drums was therapy. When she left to help care for her father, she didn’t realize the stay would stretch out for six weeks, and so getting back home — and more importantly, getting on the road for a Bark tour that’s taken them to the Northeast this week — was exactly what she needed to center herself, she said.

“It was really hard not to be able to play; you’re doing what you’ve got to do for your family, and that’s important, and you try to keep that in front of your brain,” she said. “Tim started working on this tour months ago, back in the early spring, and it’s really funny how everything happened from the time he started working in it until we hit the road. You wouldn’t think of this trip as being therapy, but it is. It felt really good to get back on (the drums).”

And it’ll feel even better to do so back home on Friday night. They played an opening set before leaving town, but this is their show, and the bands on the bill are close friends. The audience will be full of familiar faces, and the music will rattle the beer behind the bar and the trinkets adorning the walls, the way rock ‘n’ roll is supposed to.

“I constantly get asked what kind of guitar I’m playing; that, and Susan being pretty striking behind the drums — no pun intended — all combines to draw people in,” Tim said. “We always try to approach people in a joyful way, because music is a joyful thing, and that’s the way it should be approached. I’m not gonna get up there and scowl at them and dare them to listen to me, because I did plenty of that as a kid.”

"Revolution #None," by Bark

LISTEN: Find this story online at www.thedailytimes.com/entertainment to listen to a song from the new Bark album