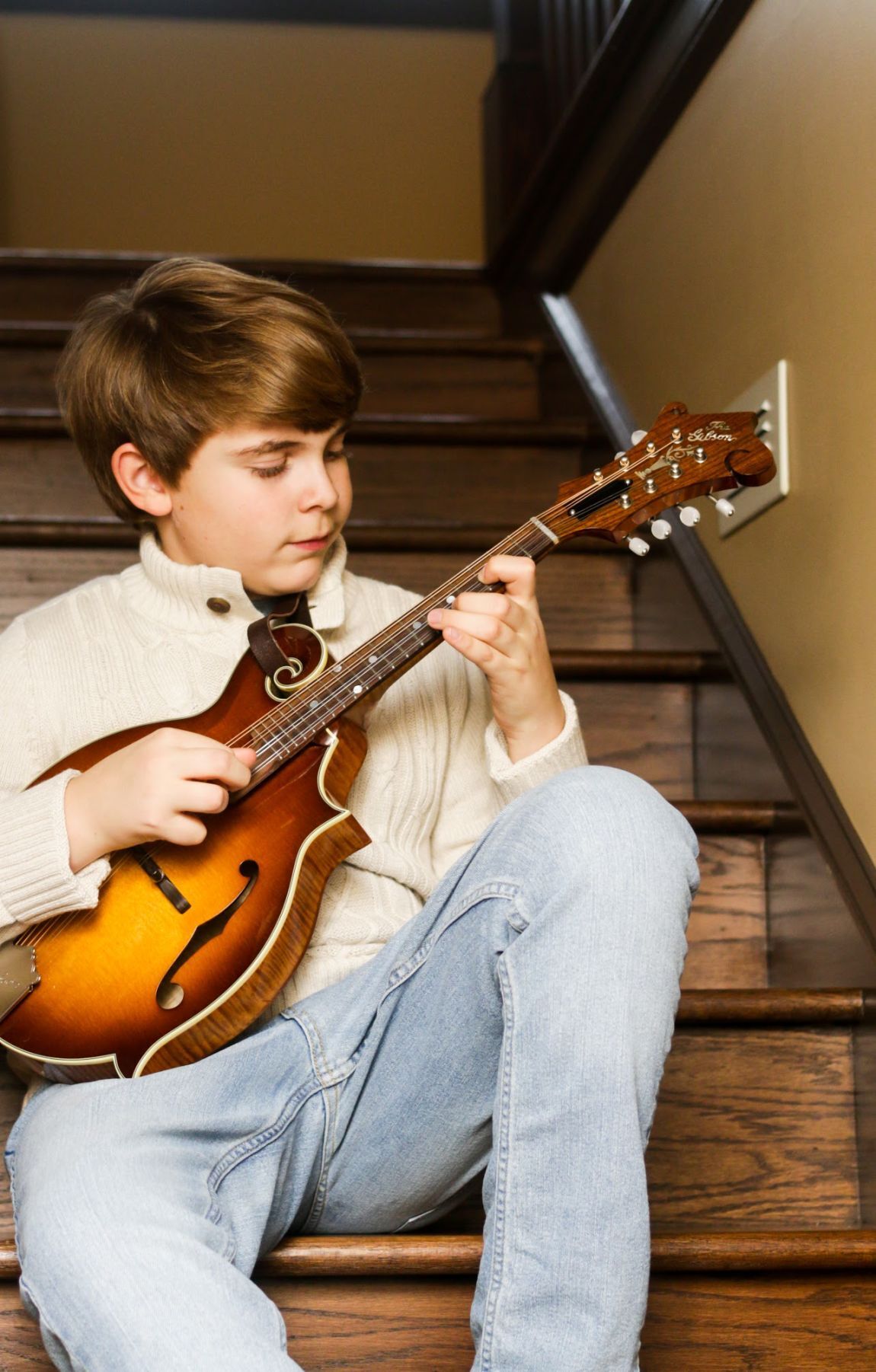 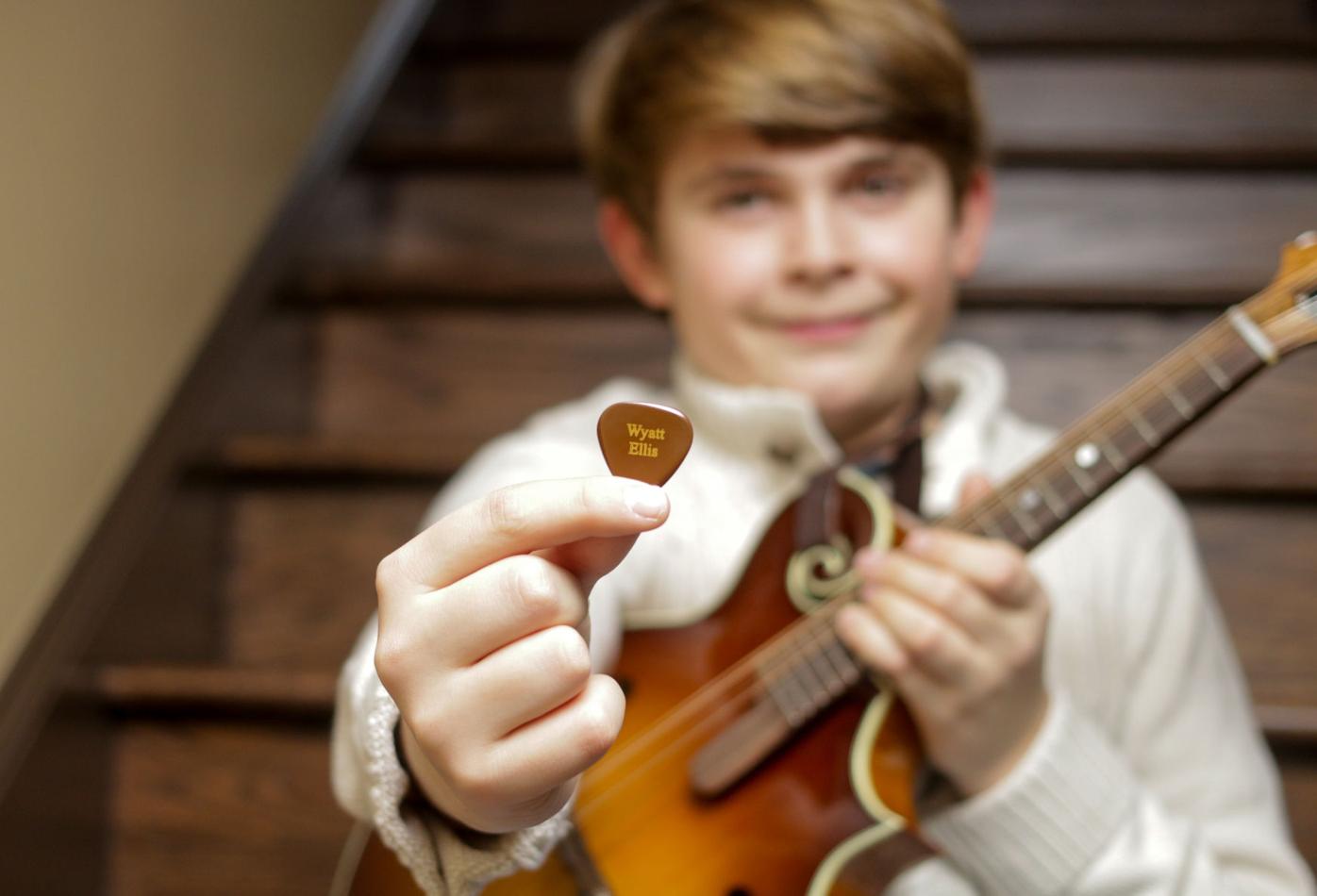 Wyatt Ellis holds a pick with his name engraved on it. 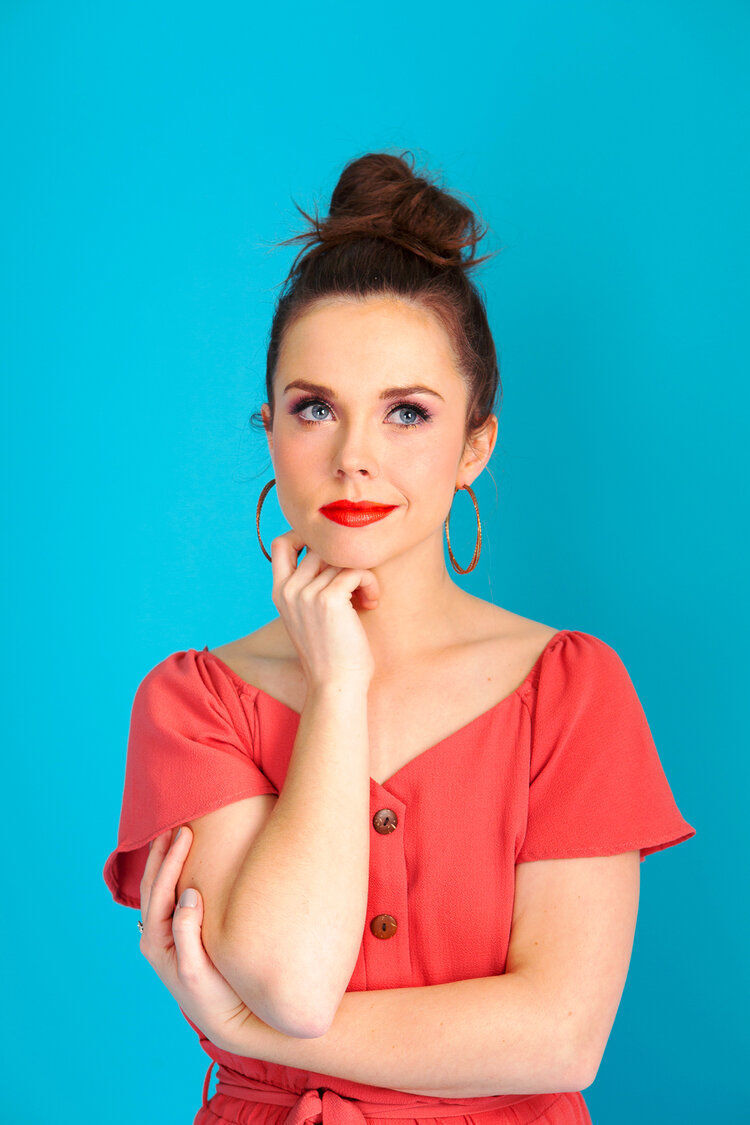 Wyatt Ellis holds a pick with his name engraved on it.

It’s a glass-half-full way of looking at the COVID-19 pandemic, but both 29-year-old bluegrass standout Sierra Hull and 11-year-old Blount County boy Wyatt Ellis agree: If it wasn’t for the virus, they probably would have never found one another.

They met once, right before everything started to shut down in Tennessee: Hull — who was taken under the wing of bluegrass maven Alison Krauss when she was about Wyatt’s age and went on to record for the prestigious Rounder label while winning Mandolin Player of the Year by the International Bluegrass Music Association for three years in a row — was playing in Crossville.

That was back in February, a gig she enjoyed, she told The Daily Times this week, because of its relative proximity to her hometown, Byrdstown, Tennessee. Wyatt, a budding musician who had gotten his start under the tutelage of Blount County multi-instrumentalist Roscoe Morgan, happened to be in attendance with his mother, Teresa.

“I had heard of her plenty, and she was one of my favorites,” Wyatt told The Daily Times this week. “When I got to see her, I was actually able to meet her backstage, and I told her I loved her music.”

By that point, Wyatt already had surpassed the cute-kid-playing-“Mary-Had-a-Little-Lamb”-for-a-video phase that doting parents share to anyone whose attention they can commandeer. It started out that way, certainly: Wyatt was raised on bluegrass; his mother, Teresa — a dentist with a practice in Knoxville — always had an affinity for the mandolin, and Wyatt was curious about what it might sound like.

His folks (his father, David, works in Oak Ridge) bought him a used Loar model, and at first, he might as well have been trying to play a boat anchor. But then, something clicked. The notes came easier, the strings felt more natural and the sounds he coaxed from it quickly eclipsed the clunky beginner songs that every picker starts out on.

“In the very beginning, I didn’t know anything about players like Sierra or Chris Thile. I just tried to accept all styles,” Wyatt said. “Of course, I had my teacher, Roscoe, and he introduced me to the Bill Monroe style. And basically, it just clicked with me after six months of playing.”

“Roscoe taught him a lot of really cool licks,” Teresa added. “Once he went there, and Roscoe showed him the licks he knew, there was no stopping him. He can mimic anybody, and now that he’s had time during the pandemic to do more and learn more, he’s found all of these wonderful players beyond Bill Monroe.”

He was helped along the way by local pickers like Morgan, and Mike and Connie Clemmer at Wood-n-Strings Dulcimer Shop in Townsend, where he went last summer for the final few “Pickin’ Porch” sessions along the Little River. The Clemmers pointed him back down East Lamar Alexander Parkway to the Rocky Branch Community Club, a rural outpost and roots music bastion that’s earned a musical reputation over the years that stretched beyond American shores.

The men and women who gather every weekend at Rocky Branch didn’t see a kid when the Ellises pulled up one Friday evening: They saw a mandolin player, Teresa said.

“Ben Cooper (president of the community club), he plays mandolin, and we ran into him in the parking lot,” she said. “We told him we had never been there before, and asked if there was somewhere this little guy could go in and play mandolin, and Ben — he calls himself the ‘Mayor of Rocky Branch’ — he plays every weekend with his band, the Mountain Gap Band, and he put Wyatt right up there front and center with his group.

“That was the biggest thing that inspired Wyatt. After that night, he was hooked. If Ben had said, ‘I don’t have time for this kid,’ or, ‘He can sit in the back row,’ that could have changed everything for Wyatt. But there were so many people who just welcomed him.”

For the next six months, Wyatt was a regular, and he developed fast friendships with a lot of the musicians at the community club. But then COVID-19 drove the Ellises to the socially distanced safety of their farm, and as encouraging but musically bereft parents, Teresa and Davis were at a loss about how to maintain their son’s engagement.

Meanwhile, in Nashville, Hull was enjoying the time off from a busy career. Ever since she released her first Rounder album — “Secrets,” when she was 17 — she’s been collaborating, touring and performing for the majority of each year, and COVID-19, she told The Daily Times, gave her a welcomed break. However, it also opened up her calendar, and when Bradley Hanson, director of folklife for the Tennessee Arts Commission called her up about a project, she had both the inclination and the time.

“They have people every year who do these apprenticeships, and the idea is to pass down this knowledge, and they asked if I would be interested in passing down the tradition of playing mandolin,” Hull said. “I loved the idea, and funny enough, Wyatt popped in my head, but I didn’t know his name at the time. I remember him from that show in Crossville, and I remember he was really excited to be there and that he was learning to play. But I didn’t know anything about him.”

Student selection was up to her, and so she started asking around — a friend involved with the “Kids on Bluegrass” program sponsored by the International Bluegrass Music Association, who in turn asked Danny Roberts, a five-time IBMA Mandolin Player of the Year who picks for the Grascals. Roberts had heard of Wyatt, and even taught him in a digital workshop his parents had signed him up for. Hull looked him up online, but then Hanson called and said he had a recommendation of his own: a kid from Maryville named Wyatt Ellis.

“That’s when I thought, ‘OK, I think this thing is meant to be,’” Hull said with a laugh.

Hanson rang up the Ellis farm to deliver the invitation: Would Wyatt be interested in having Sierra Hull as a mandolin mentor?

“I really freaked out when my mom told me that,” Wyatt said. “I went crazy.”

“He didn’t put his mandolin down for three days,” Teresa added. “And then he really started learning a lot of her stuff.”

The pair collaborates over Skype every other week, and Hull sends her young protégé regular five- to 10-minute instructionals over platforms like Dropbox. Those serve as prep work, and the next time they’re on Skype, he’ll recreate what she’s teaching or recommending. That he does it all by ear is impressive by any standard, especially to Hull.

“He’s young, so he’s just really at the beginning of his musical journey, but he’s already come so far in such a short period of time,” Hull said. “It’s been a really cool opportunity for him to learn from not just me, but from the virtual opportunities that have arrived as a result of the pandemic. A couple of days ago, he told me that he did a workshop with David Grisman.”

And it’s an opportunity Wyatt certainly appreciates — although one he’ll be glad to say so long to once the pandemic eases. After all, he’s to the point now where he’s got places to go, things to do and people to play for.

“My goal, when this is all done, is to get out and play at bluegrass festivals and meet other musicians,” he said.

After all, his mother added: “Since the pandemic, he’s learned about 200 songs. Before, he just knew hot licks and could improvise, but this time at home has really focused him.”

And while moms are obviously biased, Teresa isn’t the only one who sees it.

Bluegrass Friends are the Best Friends