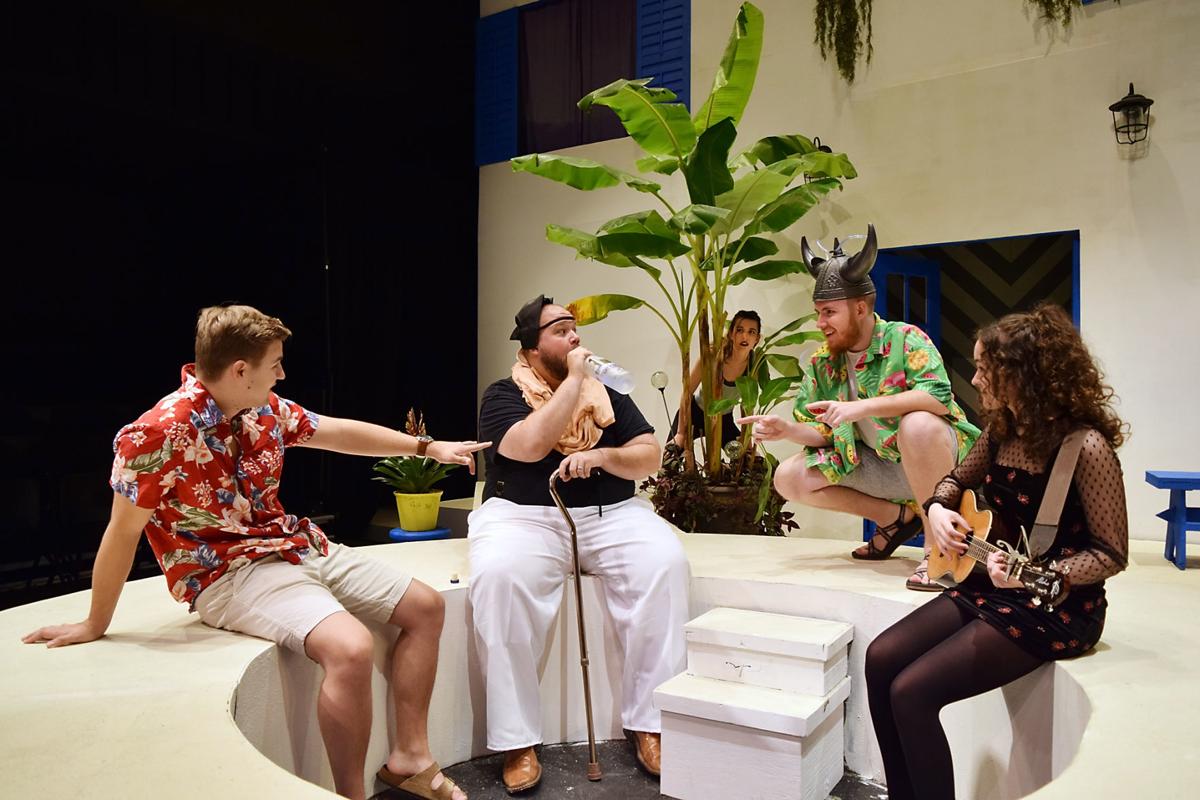 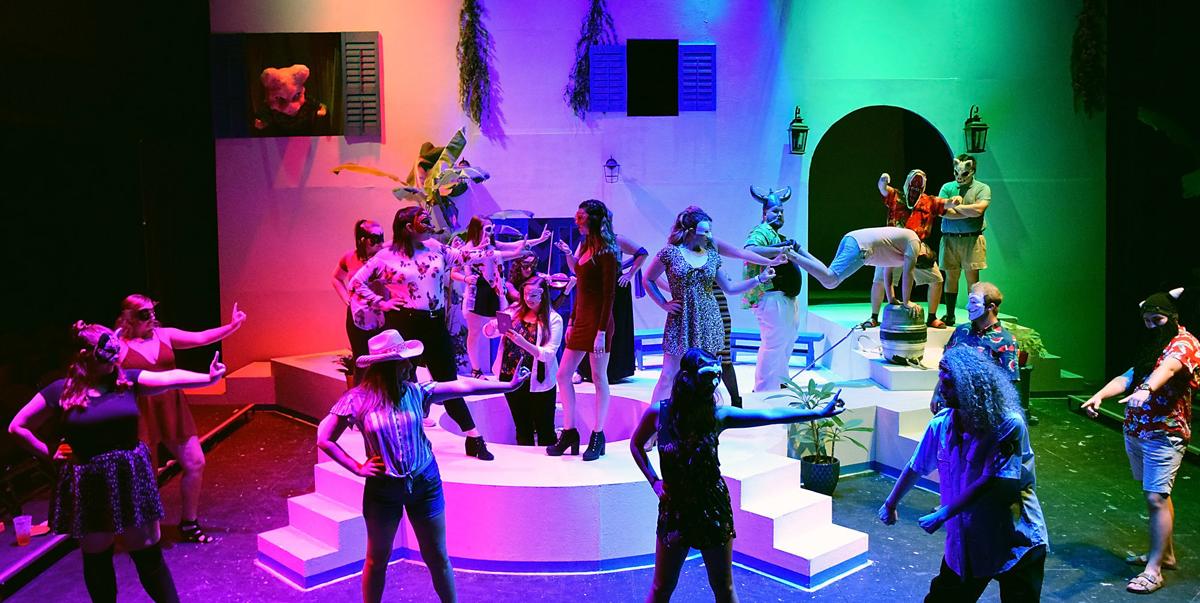 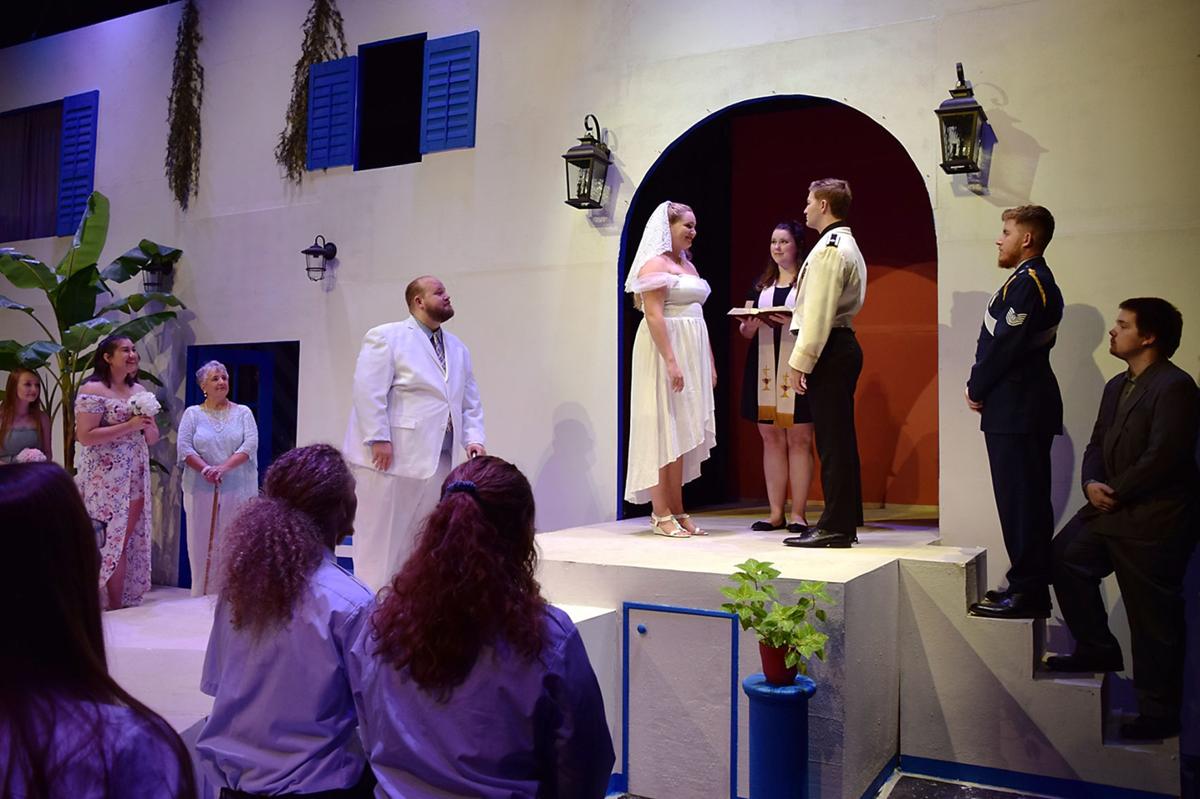 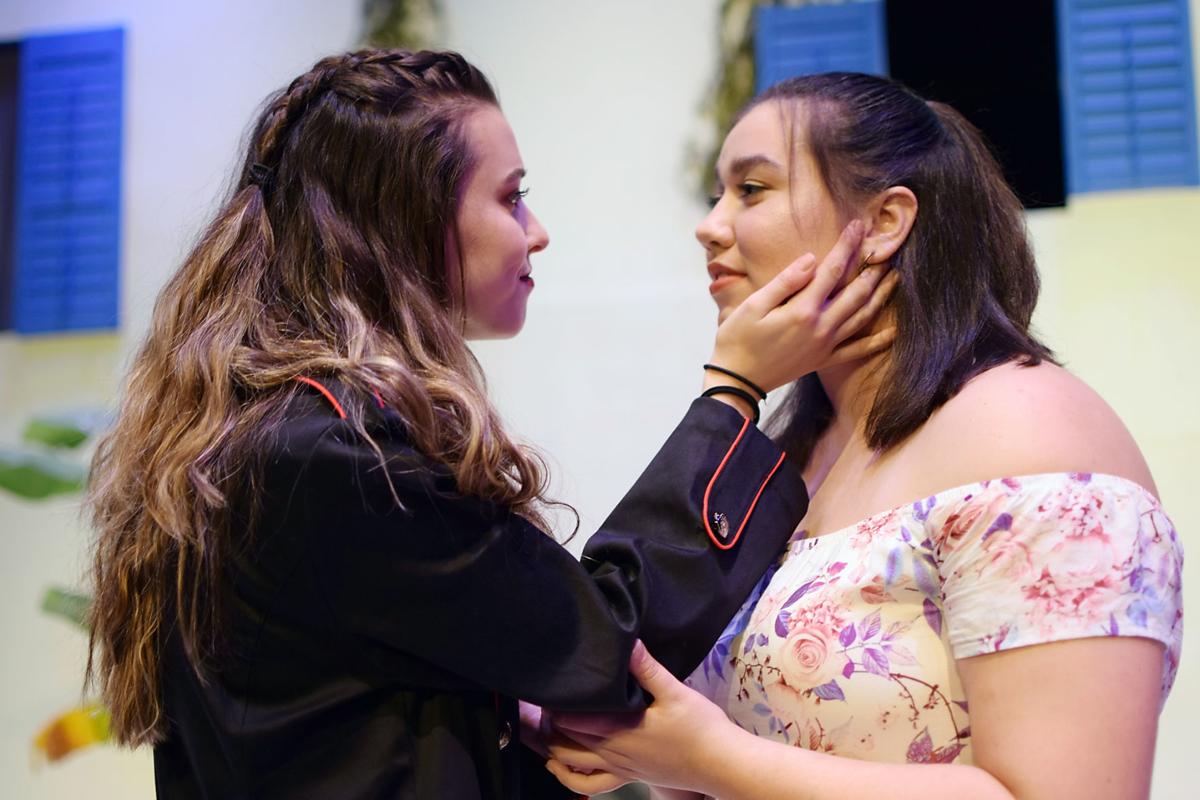 Hudson Perrine (left) and Allison Parton rehearse their roles in the play “Much Ado About Nothing” on Monday at Maryville College. 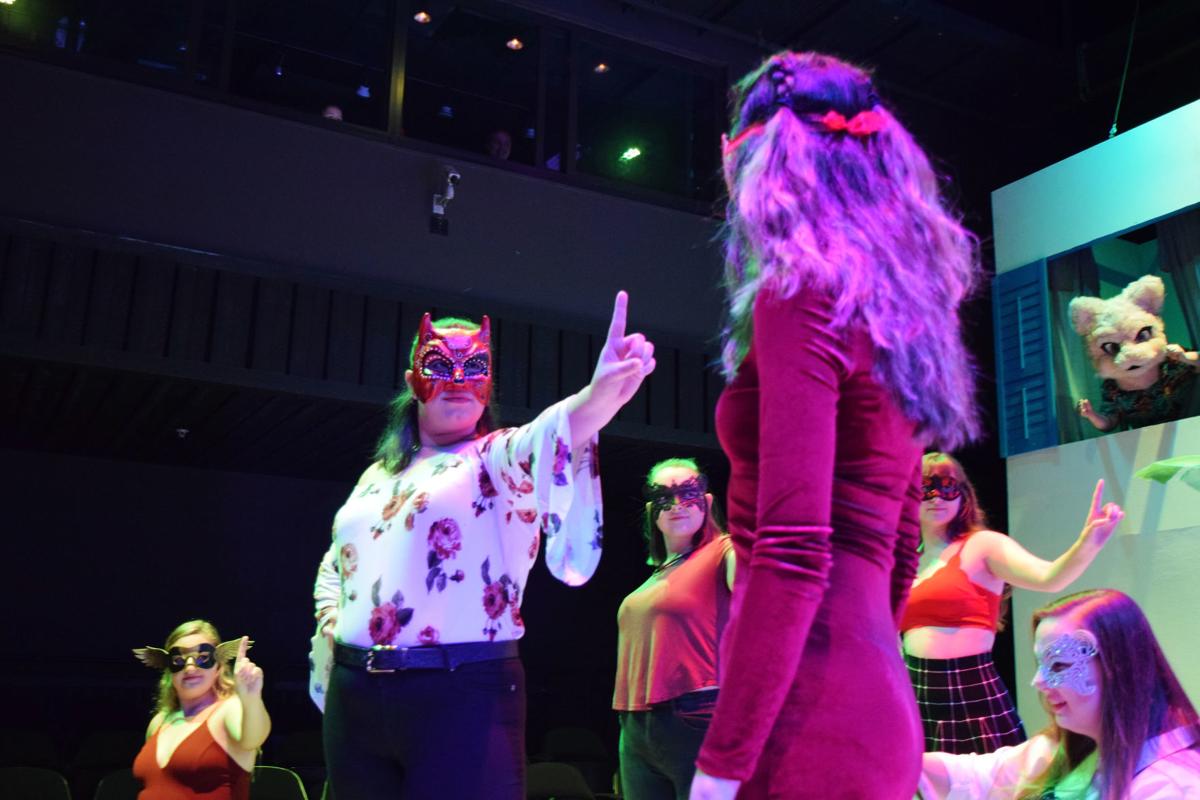 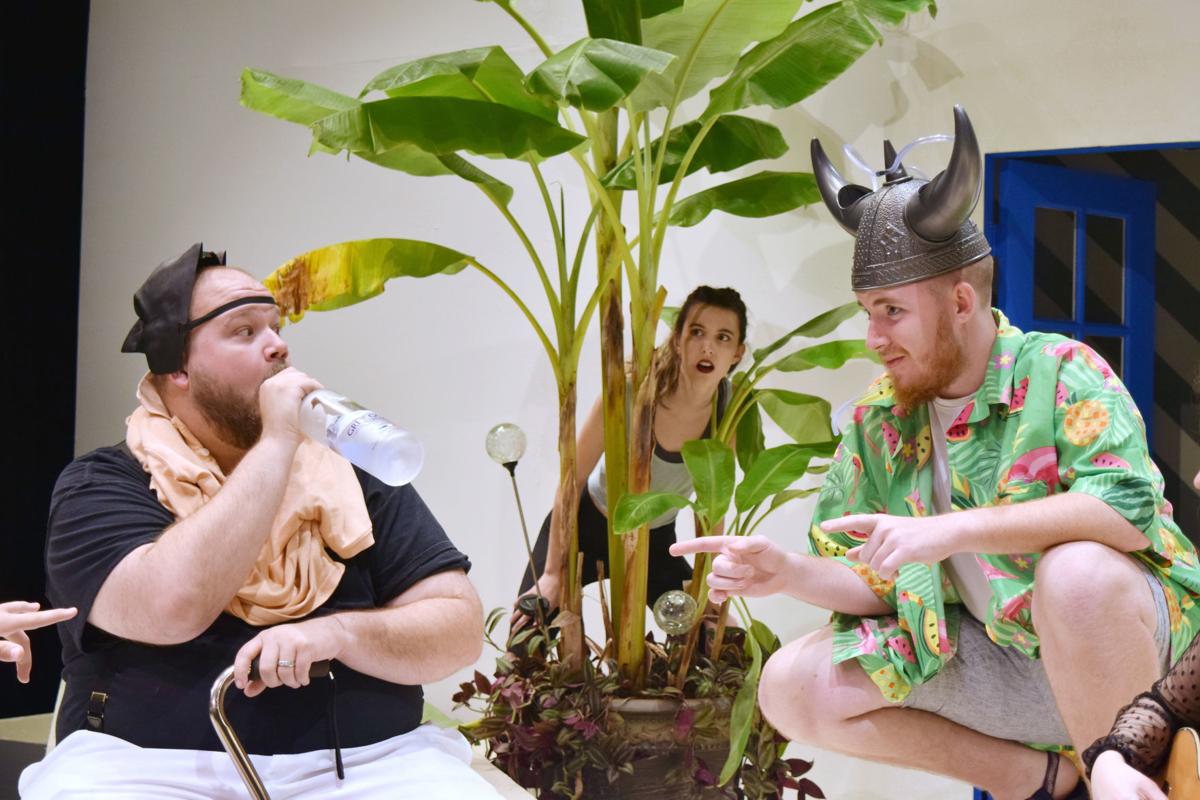 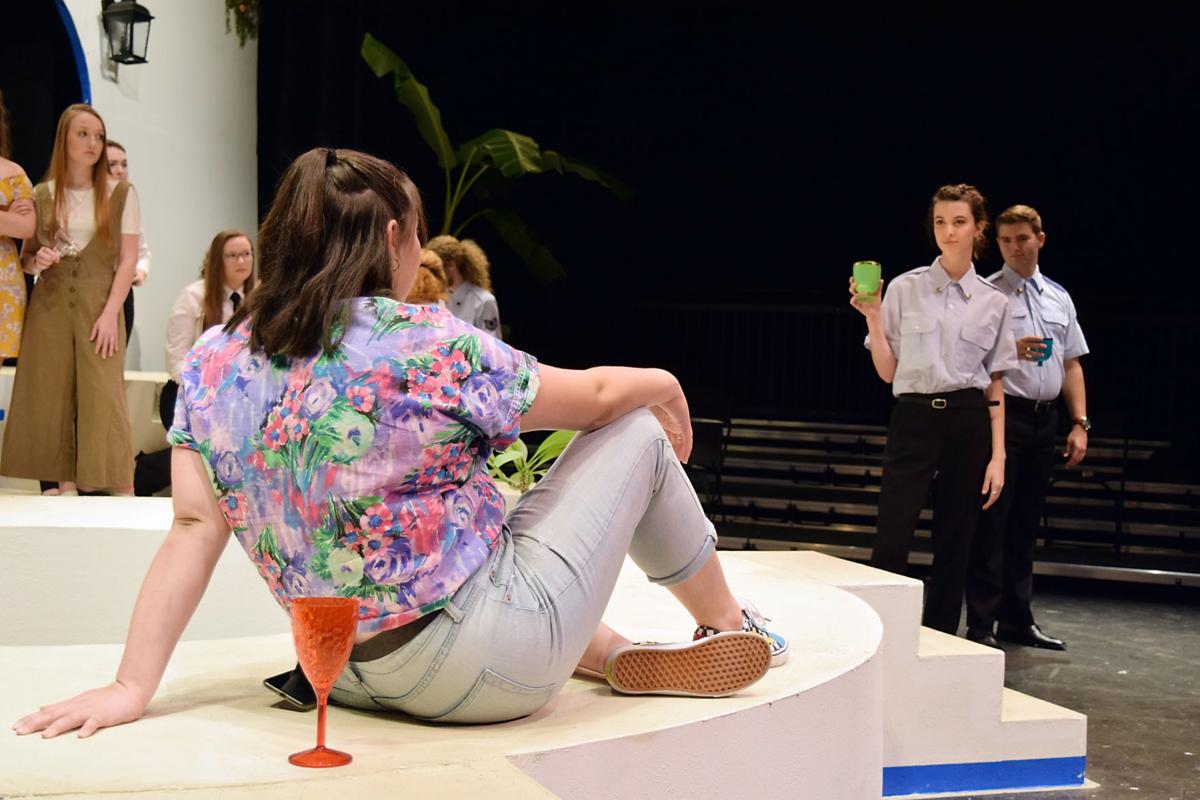 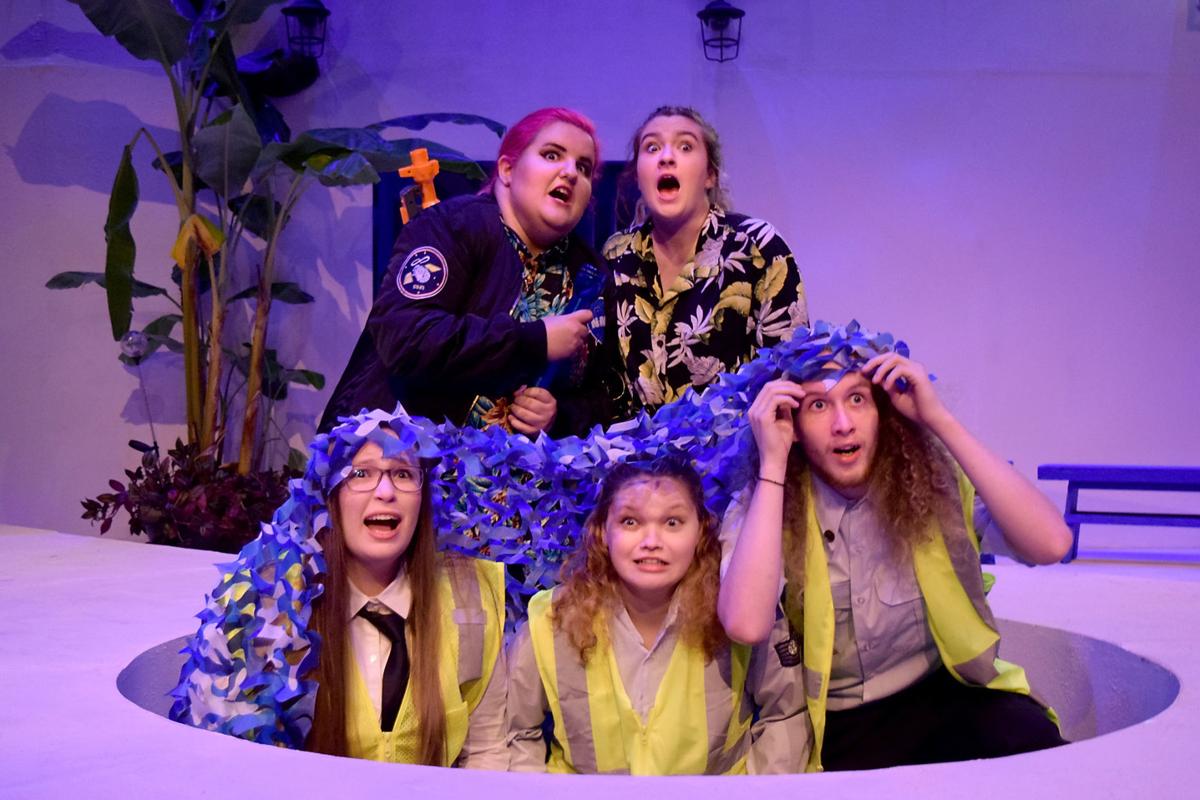 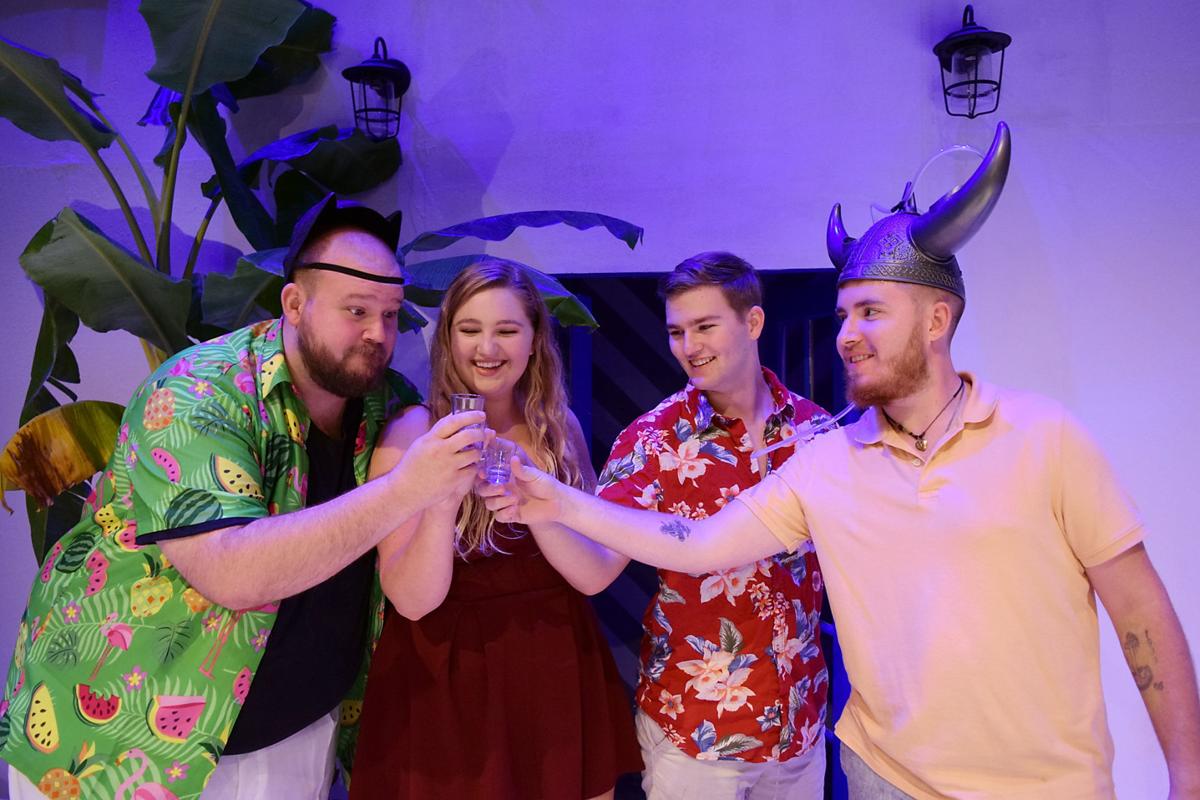 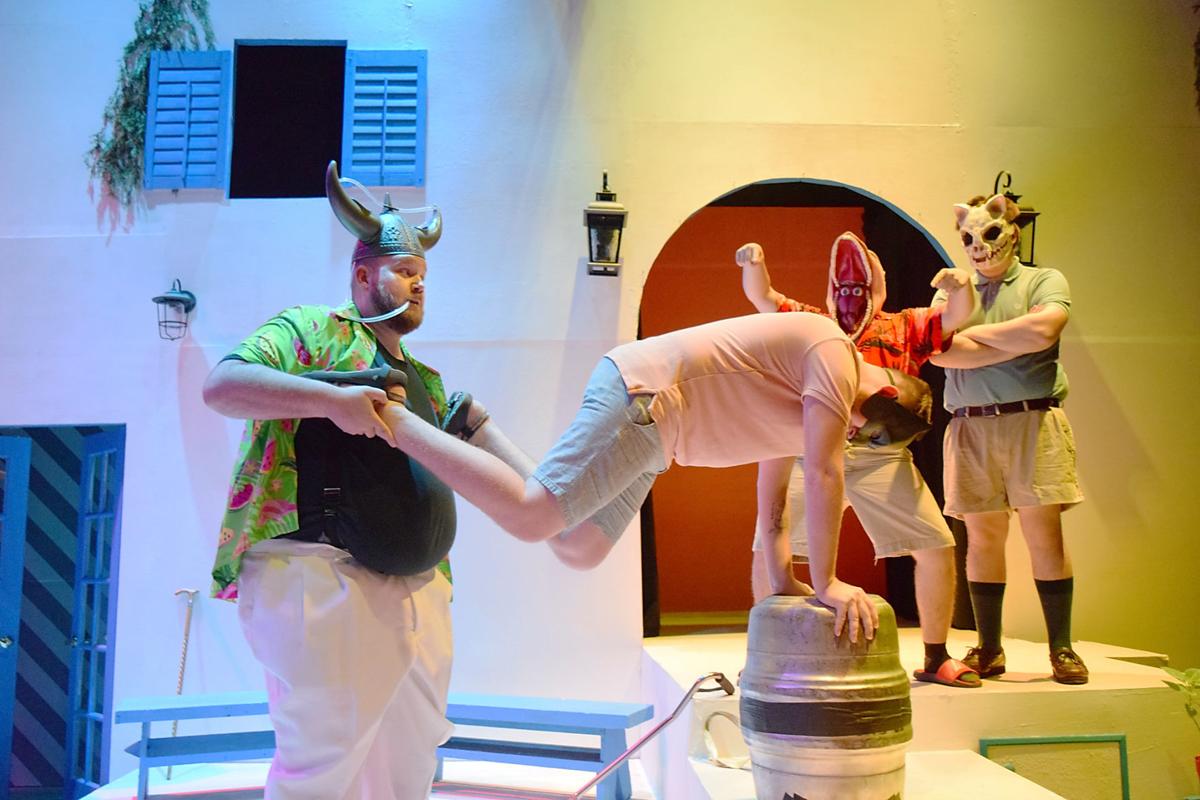 Doug James and Christopher Rodriguez rehearse their roles in the play "Much Ado About Nothing" on Monday, October 7, 2019 at Maryville College. 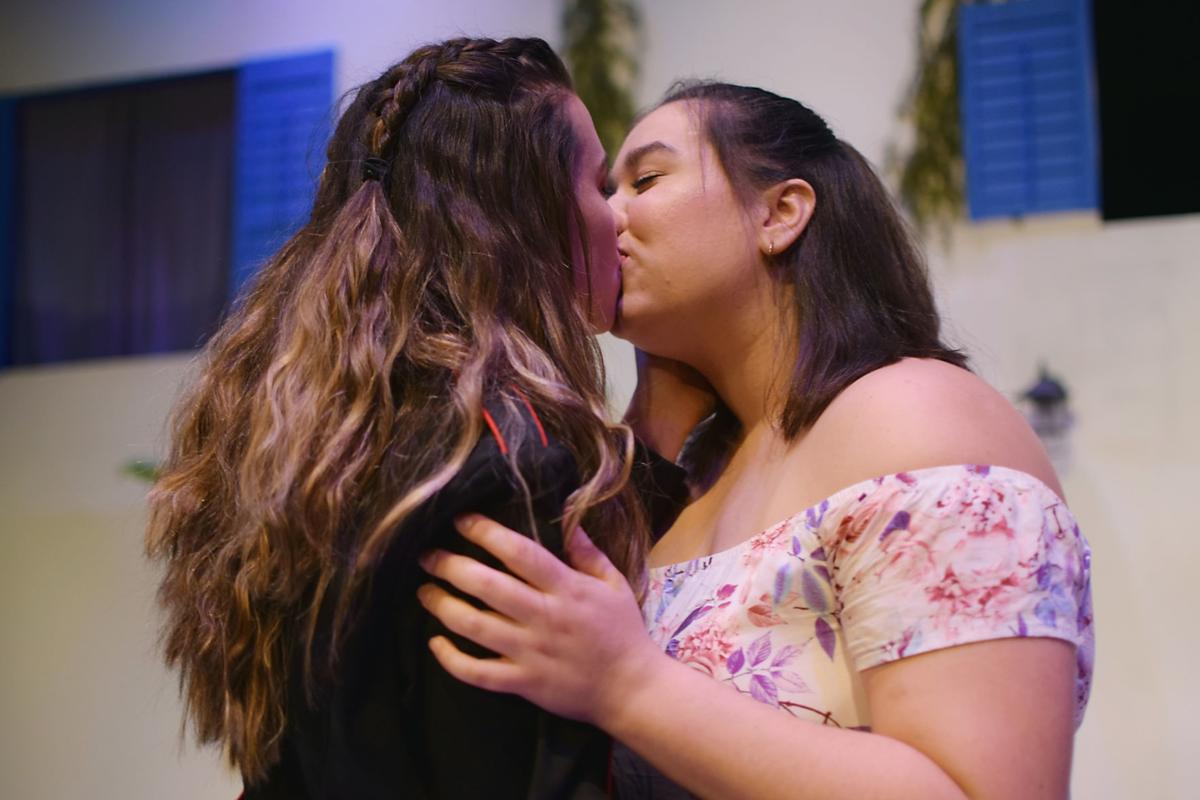 Hudson Perrine (left) and Allison Parton rehearse their roles in the play "Much Ado About Nothing" on Monday, October 7, 2019 at Maryville College.

Hudson Perrine (left) and Allison Parton rehearse their roles in the play “Much Ado About Nothing” on Monday at Maryville College.

Doug James and Christopher Rodriguez rehearse their roles in the play "Much Ado About Nothing" on Monday, October 7, 2019 at Maryville College.

Hudson Perrine (left) and Allison Parton rehearse their roles in the play "Much Ado About Nothing" on Monday, October 7, 2019 at Maryville College.

Walker Harrison counts himself fortunate in that his exposure to the works of William Shakespeare was a vibrant one.

A 2013 graduate of Maryville College, Harrison has returned to Blount County to direct “Much Ado About Nothing,” the inaugural production of the Maryville College Theatre Department’s 2019-20 season. In assembling his cast, he told The Daily Times recently, he came to realize just how much of a difference exposure to the works of The Bard can be in how they’re perceived, even among actors charged with bringing those works to life on stage.

“I think that unless you’re an academic who already has a massive understanding of the English language, Shakespeare can be boring to read, because it’s meant to be heard and performed,” Harrison said. “It’s so amazing to me, this fear that some people have of it. Even some members of my cast didn’t want to audition, because they said, ‘Shakespeare scares me.’ There’s this concept that we have to translate it, but we don’t have to do that! Someone once pointed out that 95% of the words Shakespeare uses are words we recognize in our day-to-day lives, it’s just that the order can be different or the meaning can be construed differently.

“The fear, I think, is in, ‘What am I saying, how am I saying it, and what’s going on?’ Once they get past that, they’re easy plots to follow. They‘re familiar plots that we see on daily sitcoms or on shows like ‘Game of Thrones.’ I mean, all of ‘Game of Thrones’ is very Shakespearean — take his dramas, throw in some dragons, and you’ve got ‘Game of Thrones!’ The betrayal, the plotting, the scheming — they’re the reasons we keep coming back to this stuff.”

Written in the final years of the 1500s and set in Messina, Sicily, the MC production of “Much Ado” — which debuts tonight (Oct. 10) in the Flex Theatre of the college’s Clayton Center for the Arts — is one of Shakespeare’s most popular comedies. According to Harrison, the play centers around two couples: “the quarrelsome and witty Benedick and Beatrice, and the instantly smitten Claudio and Hero. However, with villain Don Jon aiming to thwart any chance of happiness, what ensues is a classic Shakespearean tale of jealousy, betrayal, love and mischief.”

Despite his own familiarity with various Shakespearean works, however, it’s one of the few to which Harrison has no previous exposure, he added. When Heather McMahon, associate professor of theater at Maryville College, recruited him to return to campus and serve as guest director, he originally petitioned to direct “As You Like It.” “Much Ado About Nothing,” however, has been performed throughout the history of the college, and as part of the institution’s 200-year celebration, it made for a nice historical placemarker.

“It was done in the 1960s, and before that in the 1800s, but it hasn’t been staged in many years, so that’s how it came about,” he said. “Last spring, I started watching and looking at different versions, and it’s been a good learning process for me. Now, if I go back to New York City and get an audition call, I’ll be ready.”

Harrison’s theatrical journey goes back to his days at Baylor, a Chattanooga-area boarding school that the Loudon native attended for four years. There, he said, he received tutelage in Shakespearean works that gave him an appreciation for them as more than Elizabethan words in an old textbook.

“I was fortunate enough to be part of two Shakespeare productions before I got to college, so it was kind of fortuitous,” he said. “I understood early on that there was clearly a disconnect between the text and how to perform it, and it was only later on that I came to understand that most people might read the classics, but they don’t ever see or perform them.”

Harrison attended Maryville College on a theater scholarship, dividing his time between the stage and the university’s soccer team until his senior year, when he concentrated solely on theater. After leaving East Tennessee, he pursued and obtained his master’s degree at the Savannah College of Art and Design before moving to New York to find his place in that city’s bustling arts and entertainment scene. Last year, he ran into McMahon at the wedding of a mutual friend and offered to return to his alma mater to speak to her classes.

“A few months later, she said, ‘Do you want to come direct a play and maybe teach a condensed class?’ And I loved the idea, actually,” he said. “When I first came to Maryville College, I didn’t know what I wanted to study, but Dr. McMahon saw something in me, and I got a lot from her and from others who were a part of the program. Those people kept telling me I was good and to keep running with it, and here I am. Coming back, it’s a good break from the city, and it’s been good for me to teach some as well.”

Part of that dispensation of knowledge involves helping young actors discover the timeless qualities of Shakespeare that have allowed his plays to endure for more than four centuries. The misconception, he pointed out, is that because the language is sometimes viewed as archaic, the stories themselves have no relevance to contemporary times. Nothing, he added, could be further from the truth.

“Shakespeare writes with such beautiful emotion,” he said. “What’s great about Shakespeare is that once you know what he’s doing and how he’s doing it, it’s the easiest stuff in the world. For actors trying to find their intentions and motivations and tactics, he’s literally written them in for you.”

As a director, Harrison has taken it upon himself to modernize some of the play’s trappings. It’s set in modern-day Greece, and there are current socio-political touchstones that play out in the background, he said.

“The conflict that happens in the beginning is very much a civil war, and we’re talking about what happens during major civil wars in the Mediterranean and the accompanying refugee crisis and issues with migrants and immigrants,” he said. “I’m 28, so I think by my very nature, the jokes and songs and cultural references I’ve chosen reflect that.”

In addition, his work with a version of “Romeo and Juliet” last year gave him an appreciation for playing with gender roles in Shakespearean works: For that production, a transgendered Romeo fell for a lesbian Juliet, and in opening up “Much Ado” to all actors, he wanted to choose the best actors and actresses for each role, regardless of hetero-normative expectations. As a result, two of the romantic leads, Benedick and Beatrice, are both female.

Our neighbors and loved ones and friends and family are in the LGBTQ community,” he said. “By making it not a hetero-normative relationship, I didn’t want to make it a thing, but by not making it a thing, it’s become a thing. What’s great about what we’ve done, and what I think is fascinating, is that there’s really no conflict as it relates to them as two women. They’re being set up by friends who want them to be together.”

Politics and gender roles, however, are simply accoutrements: The engine that drives the production was constructed more than 400 years ago, in Elizabethan England, by a writer who was arguably one of the greatest influences on art, culture and language. That such a foundation can be built upon, Harrison said, is a testament to both the fluidity of Shakespeare and the central heartbeat of a timeless story.

“I think it’s just all going to be very familiar to everyone,” he said. “I’m dancing the line of not hammering them over the head with politics, but it exists. This is the world we live in, and a refugee crisis and an immigration crisis are not limited to a Greek island.

“Ultimately, this show is freaking hilarious, all of the jokes are sitcom worthy and laugh-track worthy, hilarious. There are things I’ve put in — callouts to current 2019 existence, whether it’s in Europe or the U.S. — but really it’s all attached to this hilarious show.”

Steve Wildsmith was an editor and writer for The Daily Times for nearly 17 years; a recovering addict, he now works in media and marketing for Cornerstone of Recovery, a drug and alcohol treatment center in Blount County. Contact him at wildsmithsteve@gmail.com.{div id=”ritekit-alerts”} {/div}

Maryville College Theatre presents "Much Ado About Nothing"

WHERE: Haslam Family Flexible Theatre at the Clayton Center for the Arts, 502 E. Lamar Alexander Parkway on the MC campus