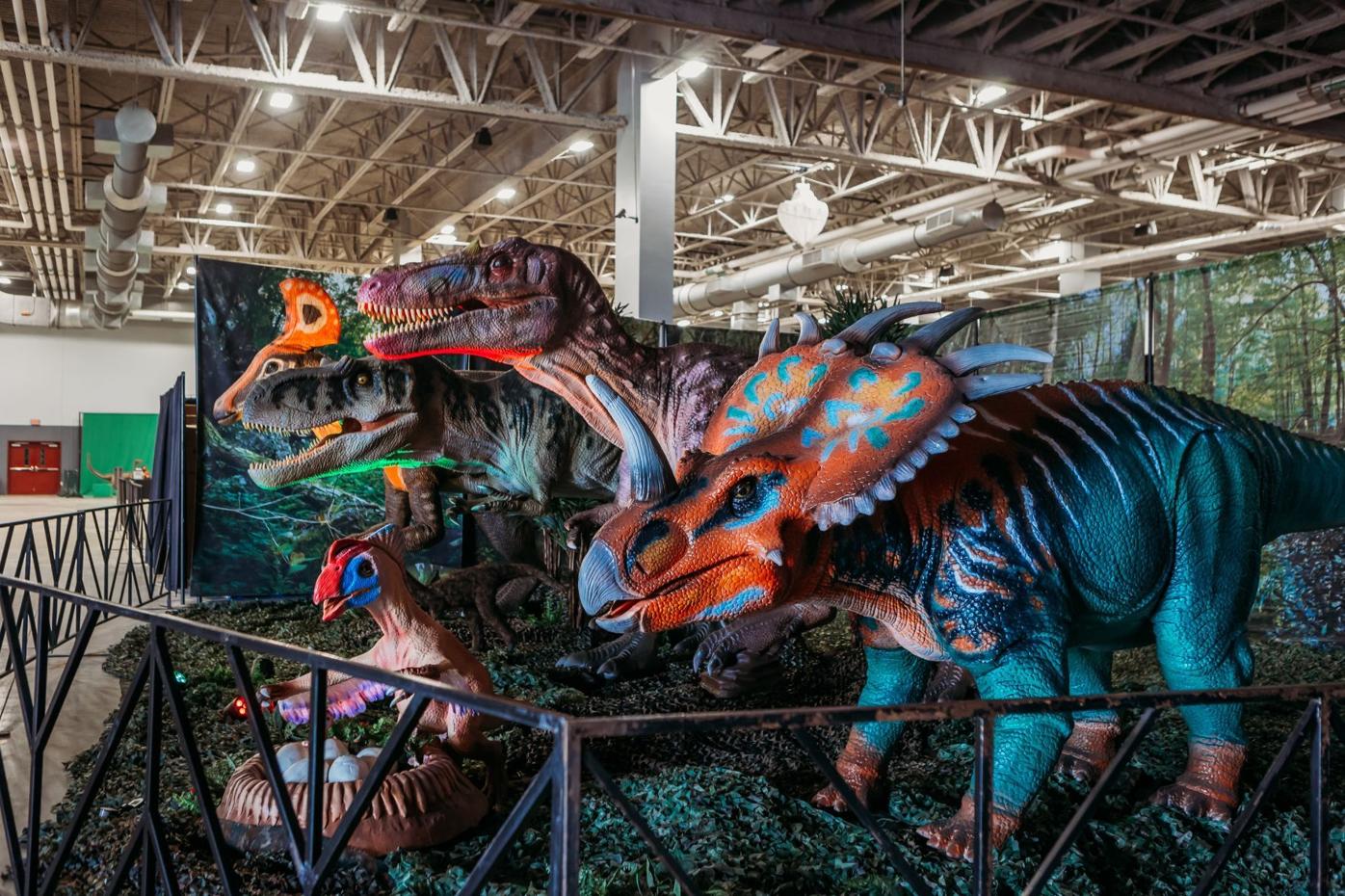 The dinosaurs of the Jurassic Quest exhibit will be on display Friday through Sunday at the Knoxville Convention Center in downtown Knoxville. 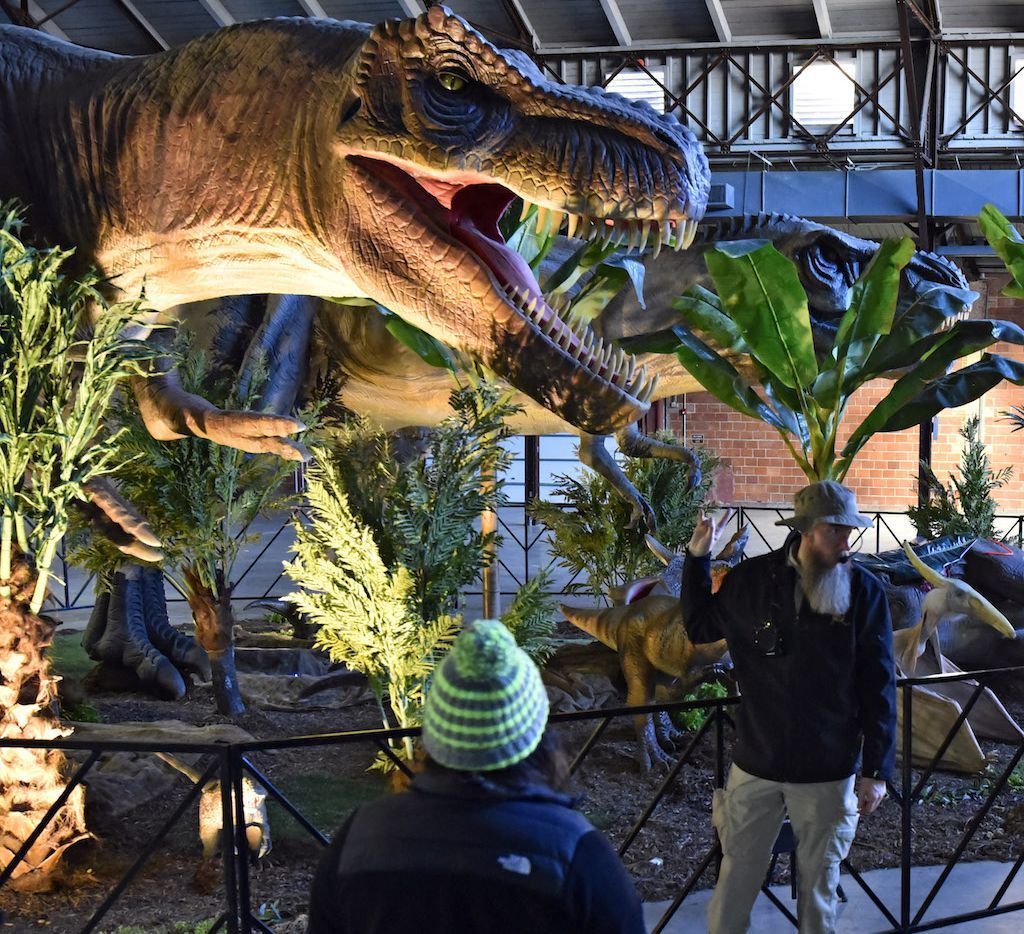 The dinosaurs of the Jurassic Quest exhibit will be on display Friday through Sunday at the Knoxville Convention Center in downtown Knoxville.

As a second grader, Marty Hoffman — aka Park Ranger Marty, who accompanies the Jurassic Quest interactive dinosaur exhibit to East Tennessee this weekend — used to sneak out of class.

He didn’t go far, he told The Daily Times recently: In fact, his “truancy” amounted to sneaking next door, where the teacher of the classroom beside his had decorated her classroom with the objects of his fascination both then and now.

“I was a dino nerd as a little kid, so when I was 5, I was already into dinosaurs,” Hoffman said. “When she decorated her homeroom with them, I would sneak over to look at them and talk about them, and when I got to sixth grade, she had me come back and do a presentation for her second grade kids about dinosaurs. So really, I’ve been talking about dinosaurs my whole life!”

Friday through Sunday, Hoffman and his fellow Jurassic Quest “dinosaur trainers” — each with similarly winsome nicknames, such as Safari Sarah, Dino Dustin, Captain Caleb and Prehistoric Nick — will be on hand at the Knoxville Convention Center, where the traveling animatronic exhibit will feature “more than 100 life-like dinosaurs, dinosaur-themed rides, live dinosaur shows, interactive science and art activities, a ‘Triceratots’ soft play area for our littlest explorers, bounce houses and inflatable attractions, photo opportunities and more,” according to a press release.

The family-friendly exhibit, Hoffman added, covers the three distinct periods of history during which dinosaurs roamed the planet, from the Cretaceous to the Jurassic to the Triassic, but educating Quest-goers in the differences between them is part of what makes Jurassic Quest more than just another dinosaur-themed fan event, he said.

“Everybody pictures them all living together at the same time, and you might see in some movies, for example, a stegosaurus fighting a (Tyrannosaurus) rex,” he said. “In reality, the stegosaurus lived about 150 million years ago, while the T. Rex lived about 66 million years ago — so the difference in time between the stegosaurus and the T. rex is greater than the difference in time between the T. rex and us.”

Jurassic Quest’s animatronic dinos, Hoffman pointed out, are displayed among realistic backdrops, and the show’s creators have worked with paleontologists to painstakingly recreate each mighty lizard as lifelike as possible, down to the color of their teeth, the texture of their skin and the way they move, all based on fossil records that have developed contemporary understanding of the prehistoric eras in which they were the planet’s apex predators.

“It’s the largest traveling dinosaur show in North America, with 100 life-sized dinosaurs, and in our ‘Ancient Oceans’ exhibit, a 50-foot long megalodon shark,” Hoffman said. “There are three baby dinosaurs you can meet, the largest ridable dinosaurs in North America, our walking dinosaur show and so much more: crafts and coloring stations, bounce houses, photography stations and airbrush tattoos and, one of my favorite things, visitors can learn the real science of the dinosaurs at the fossil table.

“I’m a big dinosaur nerd, so I love the focus on education, and I consider dinosaurs to be gateway science — because when kids learn about dinosaurs, they’re learning about biology and geography and geology and even astronomy. It’s just awesome fun for the whole family, and kids get to learn about all those things, just because they’re interested in dinosaurs.”

Hoffman’s journey with Jurassic Quest began as one such visitor: Six years ago, he said, he took his then 7-year-old son to the exhibit, and with a background in stand-up comedy and improv, it seemed like a natural fit when he discovered that the show was hiring for a second traveling exhibit. He applied, and he’s been on the road as Park Ranger Marty ever since, he said.

“With any job, when you have long hours, you sometimes get tired, but I love to go up as (visitors) are walking through the archway and the kids see that first giant dinosaur,” he said. “Their eyes light up, and their faces have this look of shock, or this giant amazing smile on it. And then you see the parents looking at their kids, and they’re reliving their own memories of discovering all about dinosaurs, and all of the sudden, you’re recharged for the day.”

Hoffman has his dino preferences — “since I was a little kid, the triceratops was always my favorite, because everybody liked T. rex, but I liked any dinosaur that could defend itself against the T. rex,” he said — but like his fellow dino wranglers, he keeps up as best he can with the latest news, trends and scientific changes regarding the archosaurs.

However, he pointed out, he’s not a paleontologist, and while there are roughly 1,100 species of dinosaurs known to scientists, he’s not familiar with them all.

“Paleontologists in the field specialize in one group or one type of dinosaur, or even one specific dinosaur, because there’s so much detail, they can make a career out of it,” he said. “But kids know all the dinosaurs in a very general form, and once in a while, one of them will throw out a dinosaur I’m not familiar with! When you’re a person who’s an expert in general knowledge as opposed to a paleontologist in a particular field, there’s so much you don’t know. In fact, I would say that the more someone knows about dinosaurs, the less likely they are to say definitive things about dinosaurs.”

As a result, Hoffman keeps his lessons — either in person or as the guy behind the “Dino 411” information text line that guests can send their questions to — informative and fun, but not necessarily definitive. In many ways, it’s a direct reflection of the nebulous nature of paleontology, which is an ever-evolving field that changes with the introduction of new information.

And for a self-described dinosaur nerd with a love of performance, few things could be better than the combination of entertainment and education.

“I love my job, and I love getting to nerd out and joke around,” he said. “I get to combine my love of nerdy dinosaur information and my love of comedy.”