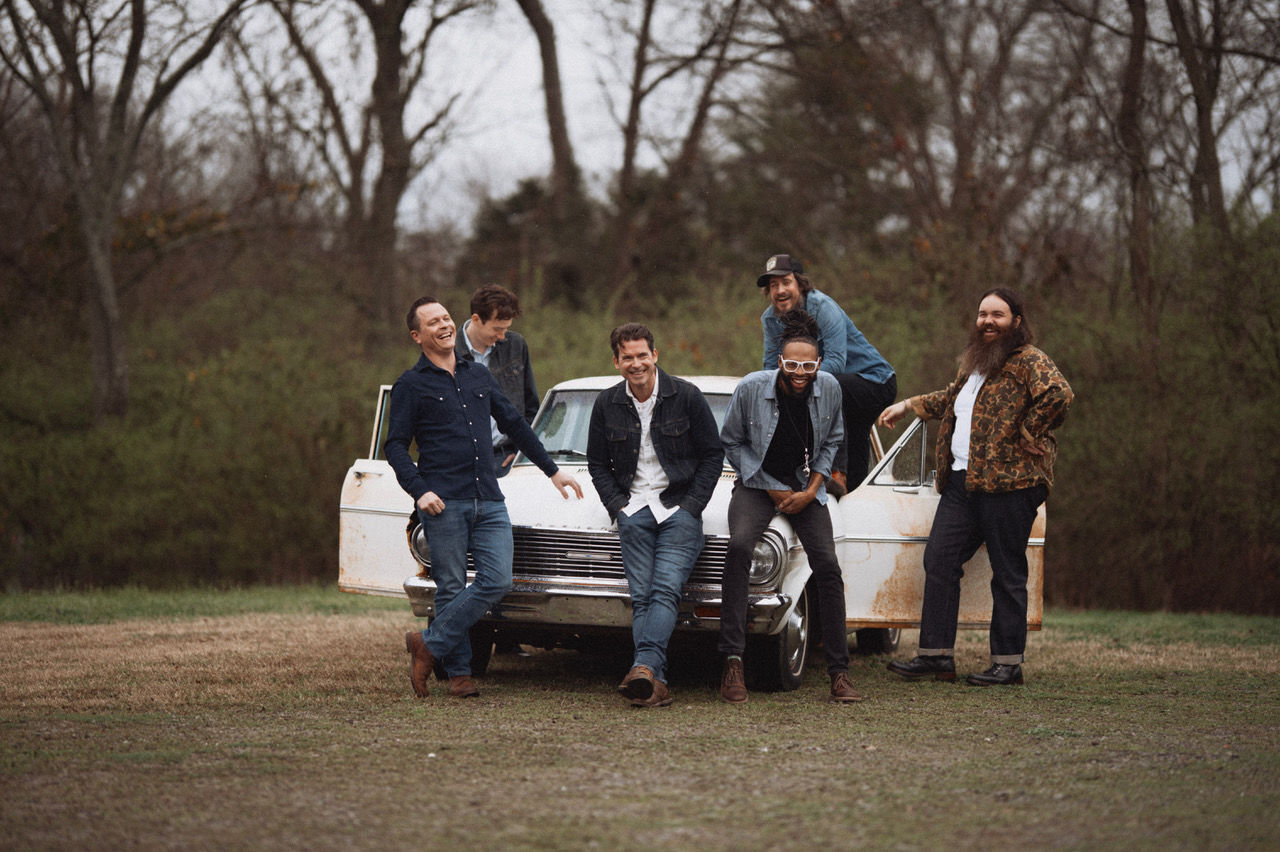 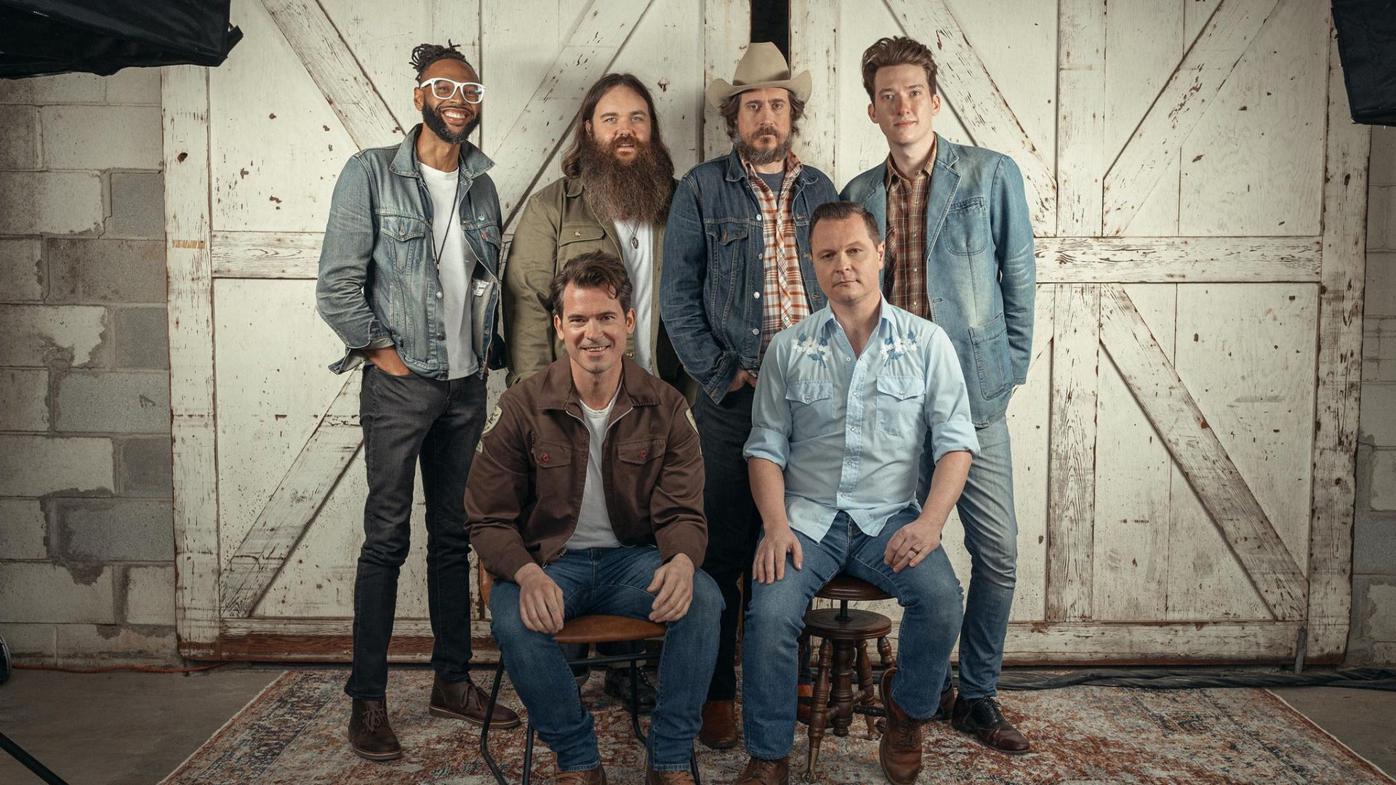 The members of Old Crow Medicine Show — Jerry Pentecost (back row, from left), Mike Harris, Cory Younts and Mason Via, and (front row, from left) Ketch Secor and Morgan Jahnig — will release the new album “Paint This Town” in April.

The members of Old Crow Medicine Show — Jerry Pentecost (back row, from left), Mike Harris, Cory Younts and Mason Via, and (front row, from left) Ketch Secor and Morgan Jahnig — will release the new album “Paint This Town” in April.

EDITOR'S NOTE: After press time, it was announced that due to COVID precautions, this show — originally scheduled for Tuesday — has been postponed until Jan. 13, 2022. The story has been changed to reflect that date.

Meet the new Crow ... same as the Old Crow — Medicine Show, that is.

The Nashville-based band, which got its start as a group of wanderlust-fueled musicians smitten with American roots music before finding fame and fortune after being “discovered” by flatpicking legend Doc Watson in 2000, has changed lineups numerous times over the past two decades.

Founding members Willie Watson and Gill Landry stepped away several years ago to pursue solo careers. Chris “Critter” Fuqua departed in January 2020, and Chance McCoy is out of the rotation as well. (All former members, incidentally, remain on good terms with the current lineup and occasionally sit in as guests.)

Founder Ketch Secor is still singing and sawing on the fiddle, however, and co-founder Morgan Jahnig is still slapping the upright bass (and occasionally playing the electric one). And while some of their bandmates might be unfamiliar to long-time fans, their energy is a perfect fit, Secor told The Daily Times recently.

“It’s really fun having these guys in the band,” Secor said. “Mason Via (a guitarist and vocalist who joined last spring) is as old as the band is, and that really brings us full circle. He’s just like the kind of kid I would have met back in Mount Airy (North Carolina) and been like, ‘I want to stay up all night playing Old Time music with you!’

“Mike Harris (the band’s new multi-instrumentalist) has been on the road with Chris Stapleton, and he grew up listening to Old Crow music in Western North Carolina. Old Crow was a gateway to him into country music, so when he plays these songs, he has that heart connection. Those things really make it feel like we’re guzzling from the fountain of youth, all of us.”

Old Crow Medicine Show traces it roots back to a seventh-grade friendship between Secor and Fuqua, who grew up in Virginia. The latter followed the former to New York, where they pulled together a group of like-minded musical friends and embraced lives as traveling minstrels with youthful abandon. The band’s fame was cemented early on when Secor and Fuqua took a Bob Dylan outtake called “Rock Me Mama,” fleshed it out and turned it into a ubiquitous track covered by bar bands around the world: “Wagon Wheel,” which was first released on the band’s 2004 album “O.C.M.S.”

As much as they’ve played it, or heard it played, it wouldn’t be difficult to imagine that Secor has had his fill of the song over the years. Not so, he said: In fact, he credits his fondness of it for the band’s brand new single, “Paint This Town,” which is the title track to the band’s forthcoming new album.

“It’s like an old friend at this point, and because I wrote it as a teenager, I’m able to engage in a song like ‘Paint This Town,’” he said. “In 1994, that same wanderlust we sing about sent me out playing music all over the world. I wanted to write myself a bus ticket to Johnson City, and I did — but it turned out the bus was also going to the West Coast and the Great Lakes, to Canada and Auckland and Berlin and everywhere else.”

Doc Watson’s daughter heard them busking in those early days outside a pharmacy in Boone, North Carolina, and when she brought her dad over to listen, he immediately booked the boys at his annual gathering, Merlefest. In Nashville, Old Crow Medicine Show made its Grand Ole Opry debut before releasing “O.C.M.S.,” and despite a short set, they were treated to an enthusiastic standing ovation and demands for an encore.

Over the course of the next half-dozen records and all those tours, the band has stuck close to the formula that earned the members such acclaim: taking a multitude of American roots music traditions, telling stories about people and places that touch the soul and doing so with the bombastic zeal of guys who are still vagabonds at heart, no matter how old they get.

“When you’re singing songs about your wild and twisted youth and you’re 40-something, sometimes it rings a little false,” Secor said. “It makes me think of how I went to see Ringo Starr in concert, and he did a bit where he said, ‘Everybody wants me to sing about how you’re 16 and you’re beautiful and you’re mine, and I realize I shouldn’t be singing that in my 70s.’

“There’s just something about looking at youth when you’re middle-aged and talking about girls and whatnot that somewhat smacks of inappropriateness. But this music has made us eternally 14 anyway. Being in a 23-year-old band, I don’t have nearly as many high school buddies in the band as I used to, but that ethos remains in Old Crow. The band was started with my best friend, and we did climb on freight trains and up water towers together, and we did kiss the girls and paint the town.”

On Jan. 13, Secor and his bandmates will paint another town that’s near and dear to their hearts: Knoxville, where Old Crow Medicine Show will play The Tennessee Theatre. In the band’s early days, the guys used to drive down from Western North Carolina to work call center jobs in Knoxville, Secor said, and he makes it over to the mountains, via Blount County and Maryville, as much as he can.

“Those are the headwaters of American popular music, if you ask me,” he said. “The hills and the watershed, they just sing of the story of the music that Old Crow plays, and we just love playing environments like that. Knoxville’s a town we can look back in and see the crooked highway we took and how far we’ve come.”

And, he added, they have further still to go. “Paint This Town,” recorded at the band’s Hartland Studio (where they performed a livestream variety show called the “Hartland Hootenanny” throughout the COVID tour stoppage), will be released in April. It’s billed as a “return to form” for the group, but what does that mean, given that Old Crow Medicine Show has rarely ventured outside of a wheelhouse made of rough-hewn timber and a stomped-smooth floor covered in the sawdust of tradition?

“It’s a feeling of ownership of the music,” Secor said. “When we first got started, for our first record (1998’s “Trans:mission”), we just hung a microphone from the ceiling, and the next day we were down at Kinko’s, making the (paper insert for the cassette cases),” he said. “Now, we own the studio here in East Nashville, and doing our quarantine livestream for 30 Saturday nights in a row, we got to know the space, and that helped us figure out what we were missing in the lineup.

“What makes our genre so special is that it’s not learned; it’s inherited. The thing about youth is that it connects us to the past. It’s a link in a chain that keeps on going back, and for us to look back and be makers of American roots music, that’s just as natural as the thumb string ringing on a banjo. We’re always looking back — at old songs, at ourselves and at America.”

Steve Wildsmith was an editor and writer for The Daily Times for nearly 17 years and continues to freelance about news- and entertainment-related topics, local performances and East Tennessee artists. Contact him at stevedailytimes@gmail.com.