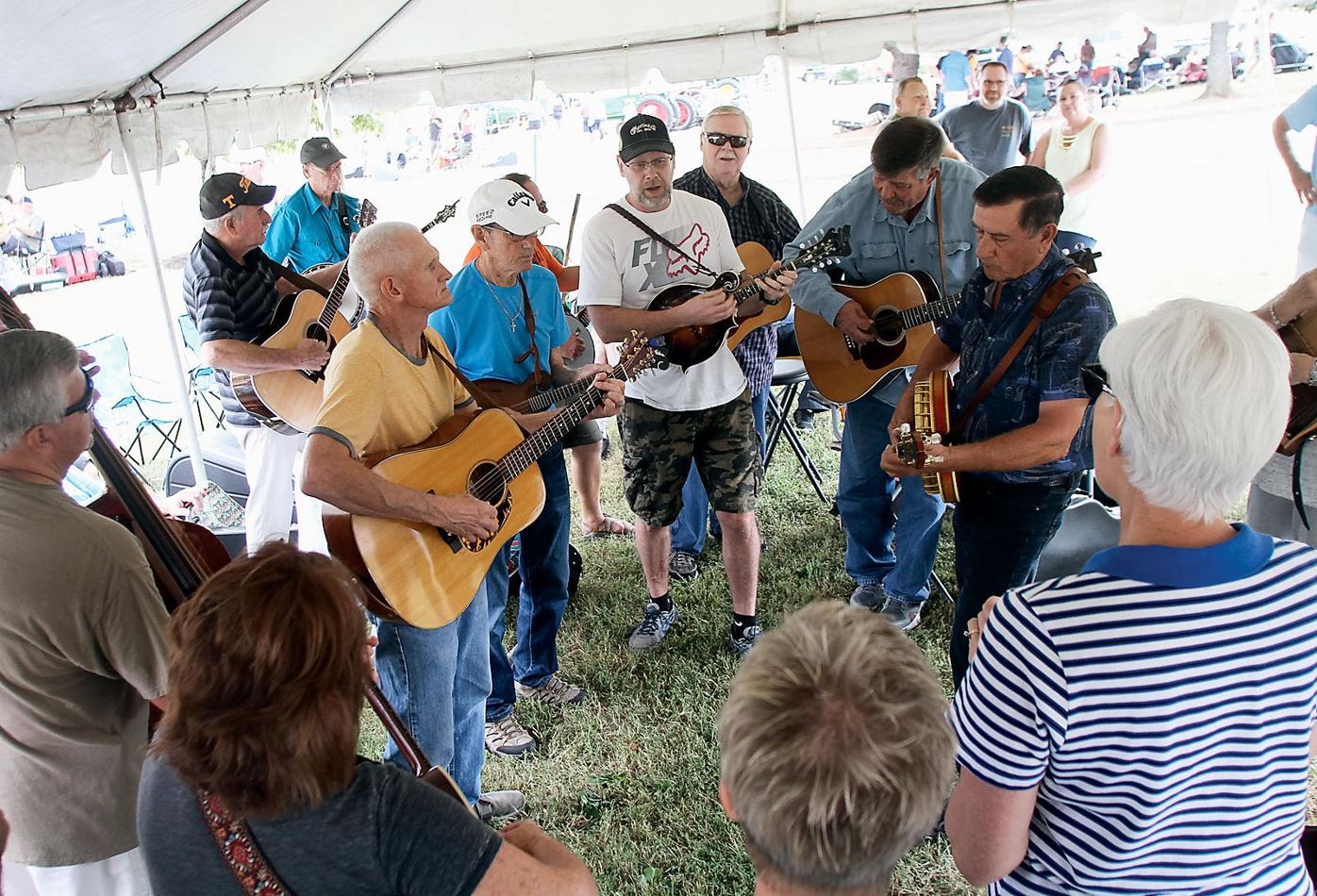 Musicians join together to play bluegrass and gospel music under the tent at the Townsend Visitor Center during the 2019 Fall Heritage Festival. 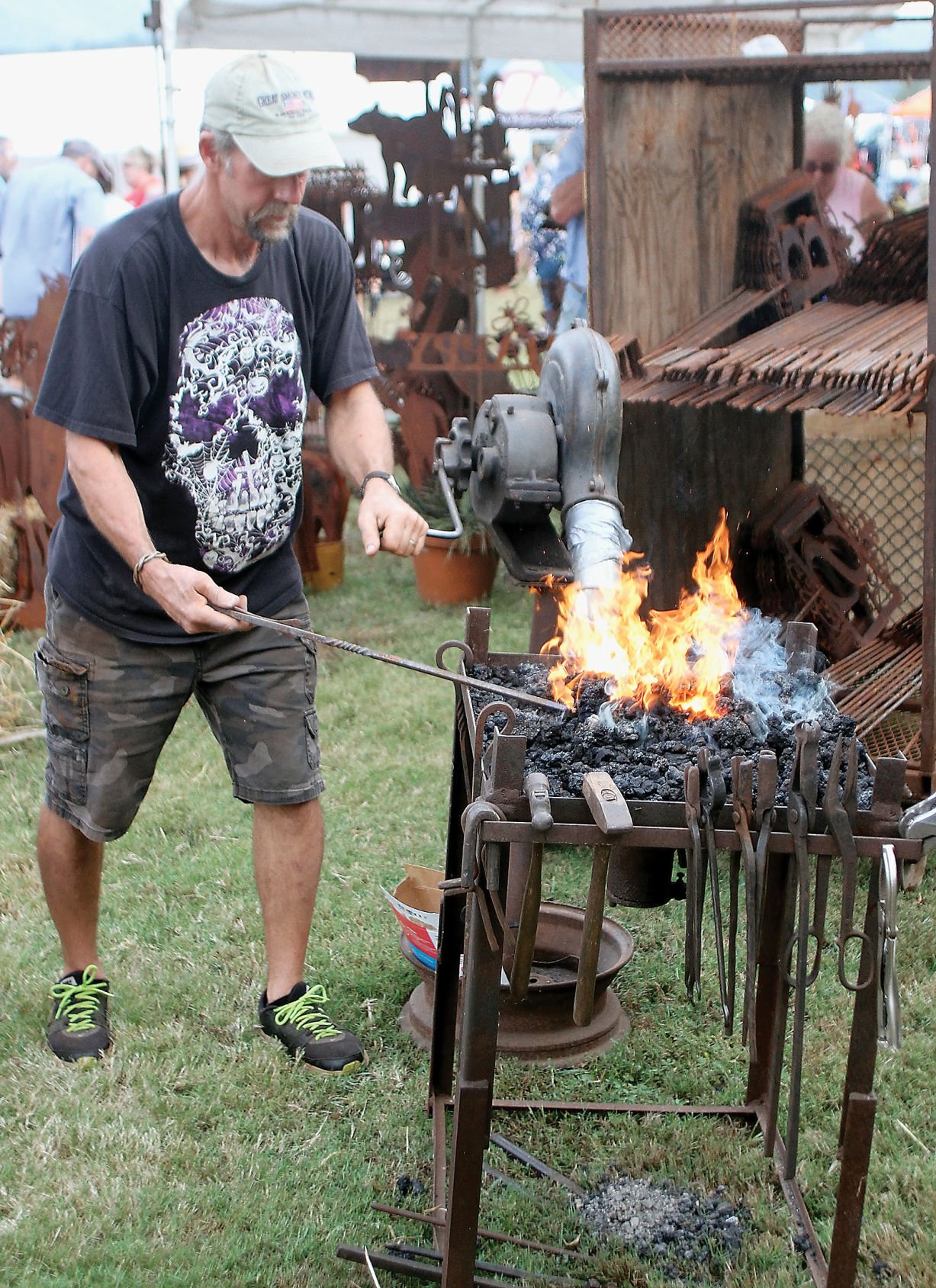 David Thomson forgeS a fireplace poker at the Oakville Ironworks booth during the 2019 Townsend Fall Festival in this Daily Times file photo.

Musicians join together to play bluegrass and gospel music under the tent at the Townsend Visitor Center during the 2019 Fall Heritage Festival.

David Thomson forgeS a fireplace poker at the Oakville Ironworks booth during the 2019 Townsend Fall Festival in this Daily Times file photo.

If mountain crafts, bluegrass music and fair food in the shadow of the Great Smoky Mountains sounds like your idea of a good time, consider taking advantage this weekend — it’ll be another year before the Townsend Heritage Festival returns to the “Peaceful Side of the Smokies.”

This weekend’s two-day event, scheduled for Friday and Saturday at the Townsend Visitors Center, will mark the last time the event takes place twice in the same year, according to Blount Partnership Communications Director Jeff Muir. Next year, the spring event will be replaced by other activities, and the annual homage to the Appalachian way of life will be relegated to the fall only.

“We’ve been running dual festivals for the better part of 25 years — the same bluegrass music, the same setup, the same operations and everything else,” Muir told The Daily Times recently. “We’ve done it twice a year, and traditionally, the spring festival was always less attended than the one in the fall. In the spring, if we could get 3,000 to 4,000 people for the weekend, we were happy, but in the fall, we always double or more than double that number.

“On top of that, the weather is always unpredictable in the spring. The last three to five years, we’ve really been saddled by storms that have rolled through, and a couple of years ago, we had to shut it down early because of the rain. So because we have a budget that we’re just trying to break even with, and with the weather and the attendance being up and down, this year we decided would be the last one in the spring, so that we could explore other options of bringing in other festivals and things to fill that time slot.”

The celebration of mountain heritage began as an offshoot of the annual Old Timers Day celebration in Cades Cove back in 1992 when the infrastructure of Townsend and the Great Smoky Mountains National Park was strained by the influx of traffic and visitors. Organizers opted to put together a small event at the Little River Railroad Museum for one night, and three bands were tapped to perform. It was a loosely organized affair made all the more intimate by the fact most of the bands were recruited from attendees who came to pick with one another, and by the end of the evening, the parking lot was full and attendees were pulling off to the side of the road and walking to the gathering.

Even after moving to the visitors center, the festival remained a low-key, all-ages affair that felt more like a family reunion than it did a festival, but word began to spread, and visitors began coming from across the Eastern Seaboard to soak up the authenticity, reverence and celebration of long-gone mountain traditions that have found new life through craftsmen, tradespeople, musicians and vendors.

“One of the interesting things about this festival is that the musical acts we have don’t get paid,” Muir said. “The performers, the pickers, they’re all your friends and the family members you grew up with, and they’re picking on the porch or in the jammer’s tent, and then they hit the stage and play. And all of them are really good musicians, even better than some of the professionals in Nashville. As a music fan, you can listen to them play or even walk up in the middle of a song, if you play yourself, and jump right in, and that’s something you don’t see at a lot of other festivals.

“We give a lot of credit to that to our longtime music director, Charlie Monday, who handled it for a number of years. Jay Tipton took over several years ago, and he started playing this festival when he was 9 or 10 years old, so he’s lived this music for his entire adult life. He’s really in touch with the musicians, and he does a great job of recruiting them to come play, and we really appreciate his efforts.”

While music is a highlight, it’s also not the only draw, especially this year, Muir added.

“One of the interesting things is the number of crafters we have,” he said. “We always shoot for 50 as a benchmark, and the last four or five years, we’ve had them in the 40s. This year, we have 54 on the schedule, and some of them have been part of it for as long as I can remember, and I’ve been doing this for 10 years. It’s great to see those type of people who recognize the value in coming to this type of festival, as well as the respect and admiration people have for what this festival can mean, not only for crafters but for Townsend as well.”

And by making the Fall Heritage Festival a once-a-year event, it also opens the door to some diversity. Last May, the inaugural Smoky Mountain Bigfoot Festival brought several thousand people to the Blount County mountain hamlet for all things sasquatch, and plans already are being made for its return in 2022, Muir said.

“We had somewhere in the 10,000- to 11,000-people range, which was great, because we had heard stories of the Bigfoot festival in North Carolina that drew 30,000 people, so we were braced for that,” he said. “What we attracted was a better size of event that we can handle, and that the city of Townsend can handle in terms of traffic, police enforcement and things like that. It was a huge sigh of relief to see it was a very manageable crowd where people could enjoy the event and not be shoulder to shoulder.”

In addition, organizers of the Smoky Mountain Scottish Festival and Games, which has been held on the Maryville College campus since 2010, announced last month that beginning in 2022, the event also will take place at the Townsend Visitors Center. Muir credits the Blount Partnership’s acquisition of surrounding property at the center — which now totals 33 acres — for making that relocation possible.

“The organizers felt like they had a good run at Maryville College, but they also felt like it was time to expand, and they were looking to find a different place to host, so they approached us about moving to Townsend and using our facility, and we were happy to oblige,” he said. “The plan is to keep it on the same weekend, a couple of weeks after the Bigfoot festival on the first weekend in May. We’re working on some infrastructure details — adding a little roadway to help ease some of the parking, and adding a building with different restroom facilities and even a kitchen area to help food vendors to have an additional place to work out of.”

Combined with the Great Smoky Mountains Hot Air Balloon Festival in August, the Townsend Visitors Center is primed to be a destination hotspot for year-round events — and Blount Partnership event and tourism officials are looking at adding more down the road, Muir added. And with the heritage festival taking place only once a year, organizers plan to build on it as well.

“We definitely feel like we can invest those spring resources into the fall festival and make it a little bigger, and perhaps expand it out a little more,” he said. “Probably not this year, coming off of COVID, but I think next year, we’ll be able to take a lot of the resources we used in the spring and make the fall festival even better.

“If you look at the numbers historically for September and October, those are the most visited times in Townsend as the gateway to the Smokies and Cades Cove. People love coming in fall to see the leaves change, and having this event being a kickoff to the fall season has definitely been something we’ve always focused on and used as a selling point as well. This feels like it’s held at the appropriate time and has the opportunity to take that next step in drawing more people and becoming a little bit larger than it is.”

HOW MUCH: $10 per day for parking, to benefit the Townsend Volunteer Fire Department