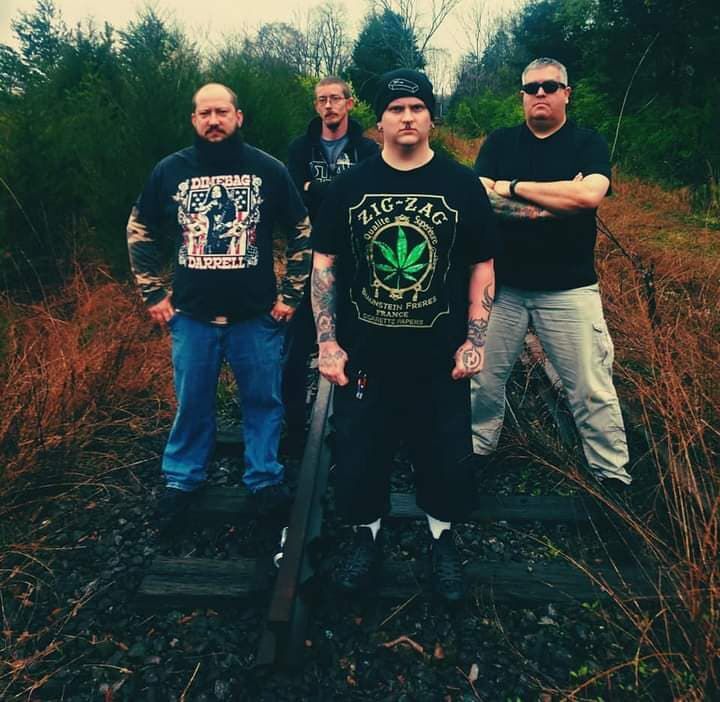 No Man’s Bid will perform Saturday at The Concourse in Knoxville as part of a bill designed to raise funds for the family of Jason McMahan, the late metal scene veteran and Blount County resident who died of COVID-19 complications. 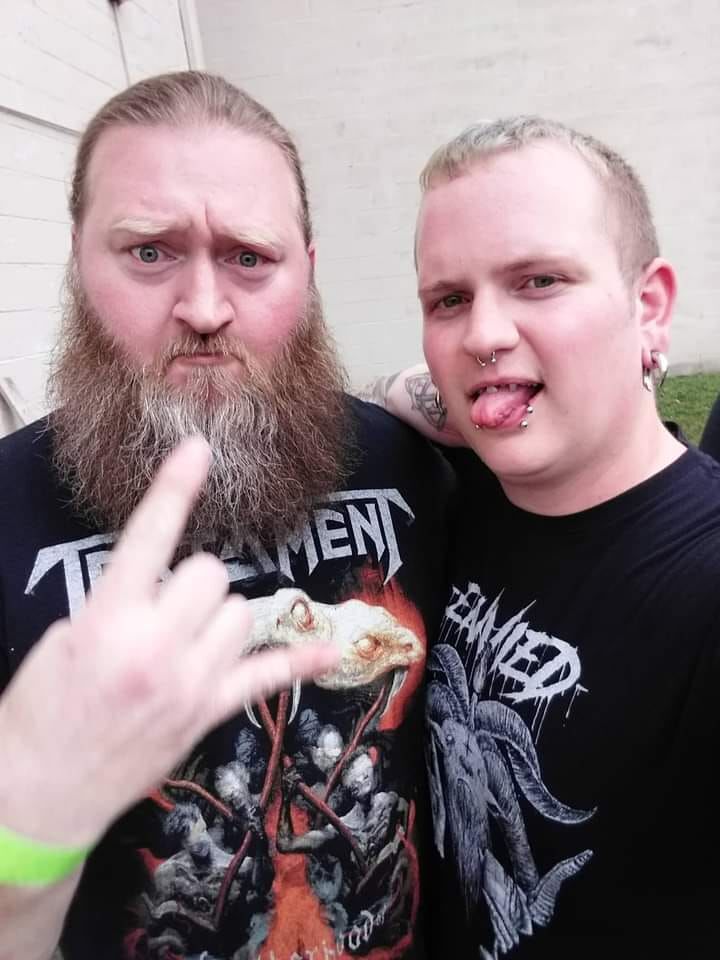 No Man’s Bid singer Nathan Newman (right) with the late Jason McMahan, a fixture in the Blount County music community whose death has inspired a Saturday night benefit show in Knoxville.

No Man’s Bid will perform Saturday at The Concourse in Knoxville as part of a bill designed to raise funds for the family of Jason McMahan, the late metal scene veteran and Blount County resident who died of COVID-19 complications.

No Man’s Bid singer Nathan Newman (right) with the late Jason McMahan, a fixture in the Blount County music community whose death has inspired a Saturday night benefit show in Knoxville.

If only those matronly grandmother types could see Nathan Newman now.

As a child, singing in his grandmother’s church, his voice made their hearts flutter, he told The Daily Times recently. In the Powell community north of Knoxville, he took to those old hymns like a natural-born talent, and eight years of vocal lessons — two of them classical opera training — only expanded his range.

“It lit the older ladies’ hearts up,” he said with a chuckle. “I sang for the homeschool co-op and got some awards, statewide and locally, but whenever I hit 13 or 14 and the teenage angst started coming on, I fell in love with metal.”

And he never looked back, he added. These days, he’s singing for the East Tennessee-based outfit No Man’s Bid, which will play its first live show in the area on Saturday at The Concourse in Knoxville as part of a fundraiser for the family of the late Jason McMahan. The vocalist and former bass player for Absent From the Body, McMahan was a fixture in the region’s metal scene before he died of COVID last month, and Newman credits McMahan for helping him to find his own footing in the metal community.

“I was in several bands over the years, but one that got more recognition than any of the others was Obliterate the Day,” Newman said. “Jason offered us a spot on his label, and he offered to manage us and record us. He saw potential in me and every individual member of the band, and when we did several shows out of state, we played a lot of those with Jason and those guys.

“Jason made me realize that there were good Christians that existed and lived by the word, because he didn’t just talk it —he walked it, and I wished I had grown up around his kind of Christianity. And I think that’s pretty much how everyone else in the music scene saw him, too.”

As a teen, Newman’s love of metal led him to the website Reverbnation, where he discovered an East Tennessee metal scene that was thriving. He attended his first local show when he was 15 — a bill that included the band Scent of Remains, which now features Blount vocalist Chris “Syn” Wright as the intimidating frontman — and what he found was a social circle that encouraged individuality rather than conformity.

“The way I grew up, it was always walk a straight line, act as holy as you can, and there was no individuality. Everyone was the same,” Newman said. “But when I branched out and went to that show, I saw everyone accepted for who they were, and it made me want to be a part of that. There was unity in it, and it seemed a lot more liberating than the confines I had grown up with.”

Back then, metal shows were plentiful in East Tennessee, and here in Blount County, McMahan’s bands were always at the forefront. Shows at the Alnwick and Springbrook community centers were regular occurrences, and long-gone places like Crossroads Café and Hastings Books Music and Video provided outlets for local bands like the one Newman started by recruiting musicians on Craigslist.

That band, Washing Scarlet, played its first show to 80 or 90 people at a private party. Newman was 16 at the time.

“The first time I was pretty nervous, but then I started feeling something that came natural,” he said.

By that point, he had befriended McMahan on Facebook, and he met the veteran rocker for the first time at that show, which also featured Absent From the Body. From that point forward, Newman looked up to McMahan as a sort of mentor. After Obliterate the Day fell apart, he took several years off before he found No Man’s Bid, which was looking for a vocalist. He knew the members — guitarist Ed Lynn, drummer James Nipper and bassist Jeremy Kaplan — and had jammed with them previously, but after the guys recruited Newman to take over vocals, the chemistry gelled.

“We call it Southern-fried metal, because that’s a fun little way to describe our influences — Pantera, Corrosion of Conformity and Crowbar, among others,” he said. “It’s somewhere between sludge and stoner/psychedelic metal.”

There’s not a lot of material out there to give fans a taste of what’s to come from the band’s recent recording sessions, but “Hellbound for Glory,” about the Battle of Midway during World War II, is a brutal sonic recreation of the hell of war, recreated through scattergun guitar, exploding-bomb drums and Newman’s guttural death-metal style vocals. On top of the musical camaraderie, though, the guys all share a similar altruistic vision, Newman said.

“I said I wasn’t going to settle with a band unless they all had the same vision I did — to make good music, but also focus on charity and helping people,” he said. “We always want to give back to the community, because that’s what Jason inspired.”

McMahan’s death came as a blow not only because Newman lost a friend, but because he and others in the scene had started planning Saturday’s concert as a way to raise funds to pay for McMahan’s COVID recovery. They had hoped he would be around to attend, or at least give his approval while he convalesced at home, but instead the event will serve as a celebration of life — as well as a way to help the McMahan family offset the mountain of medical debt they’ve inherited.

The Rock and Metal Academy of Maryville is a presenting partner, and Concourse owner Jay Harris gave organizers a steep discount on using the venue out of respect for McMahan’s local longevity. Absent From the Body will play an instrumental set, but there will be a conspicuously empty spot on stage — as well as in the hearts of younger rockers like Newman, who lost McMahan before he could truly realize how much his influence has shaped the sound of metal around these parts for years to come.

“One of the things that I hope will come out of it is a revival of unity in the scene,” Newman said. “It seems like it’s divided, a lot of times, by drama and politics and all that other B.S., but the one thing Jason always wanted was unity. He loved both sides and loved everyone equally, and he always wanted to help someone out.

“That’s my vision for the scene, and I think thanks to Jason, a lot of us share that now. It’s definitely been a surreal experience seeing everyone step up — and I’ve got to give a shoutout to Sarah Claxton, whose donation made it possible for us to get The Concourse, and Scott Thomas, because the two of them took our idea and put wheels on it. It’s definitely been a group effort in the scene to make it happen.

“We just want to do whatever we could to help his family,” Newman added. “And I think there’s going to be a lot of chills in the room that night.”

No Mans Bid - Hellbound For Glory

"What Would Jason Do:" A Benefit for the McMahan Family

FEATURING: No Man's Bid, The Rock and Metal Academy, Divided We Stand, Enter Self, Belfast 6 Pack, VanKale, WarClown, Absent From the Body

HOW MUCH: $20 suggested donation